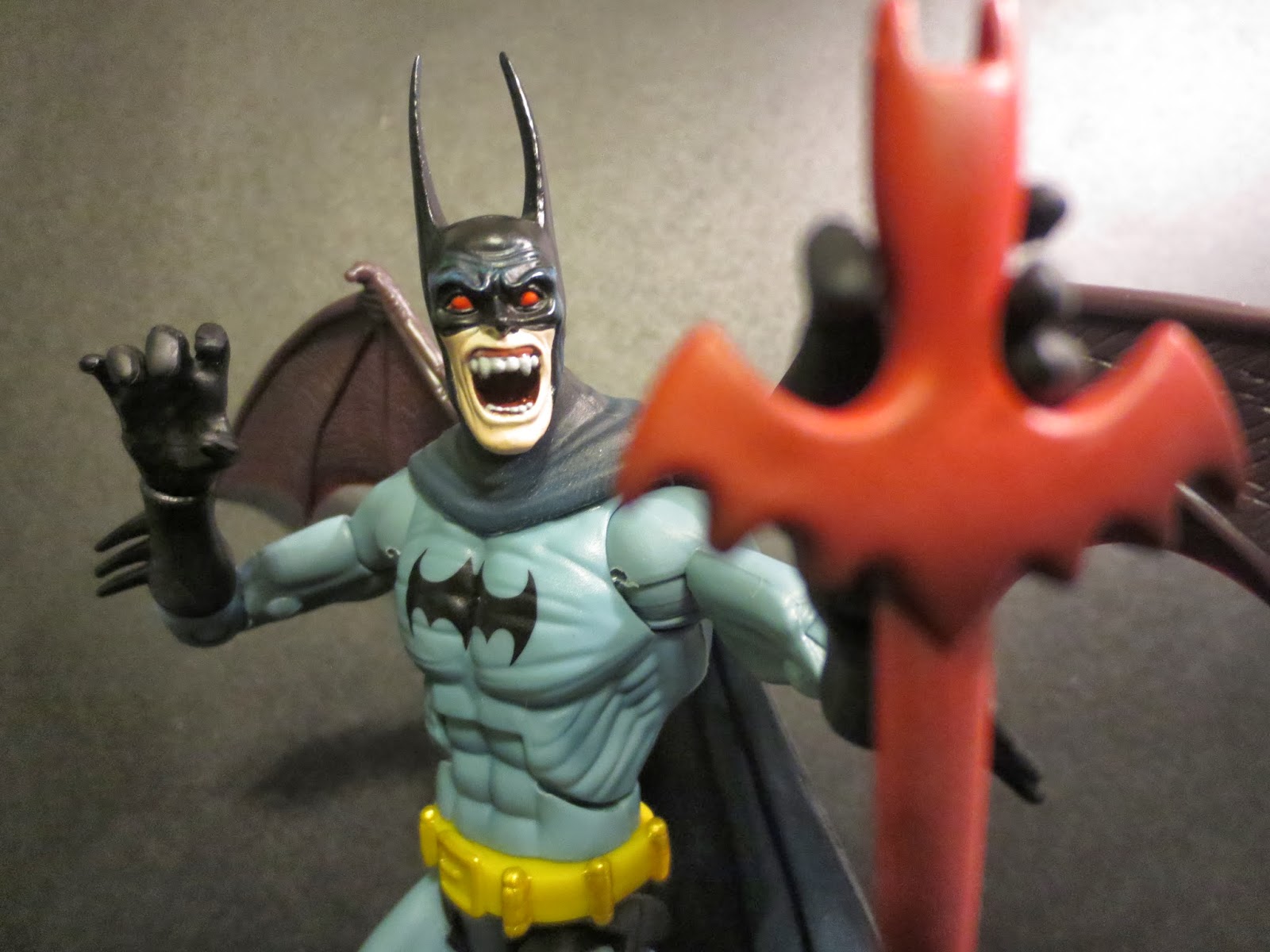 While they have their ups and downs, I have always really enjoyed the various Elseworlds titles that DC Comics released. Featuring familiar DC characters shifted around to different times periods, locales, and universes, Elseworlds gaves fans a chance to see popular heroes in situations and places that just wouldn't jive with established continuity. One of the best Elsweorlds titles I've read is Doug Moench and Kelley Jones' Batman & Dracula: Red Rain and its sequels Batman: Bloodstorm and Batman: Crimson Mist, so I was really excited to see that Mattel mined this excellent series for a figure slot in the final wave of Batman Unlimited. While overall the figures in Batman Unlimited have all been quite good (except for that terrible Beware the Batman figure), I think it's pretty clear that Mattel radically mismanaged this line and it simply died due to its proximity to DC Unlimited and DC Infinite Earths. That's really neither here nor there at the moment as I'm mostly here to review this figure, right after the break.... 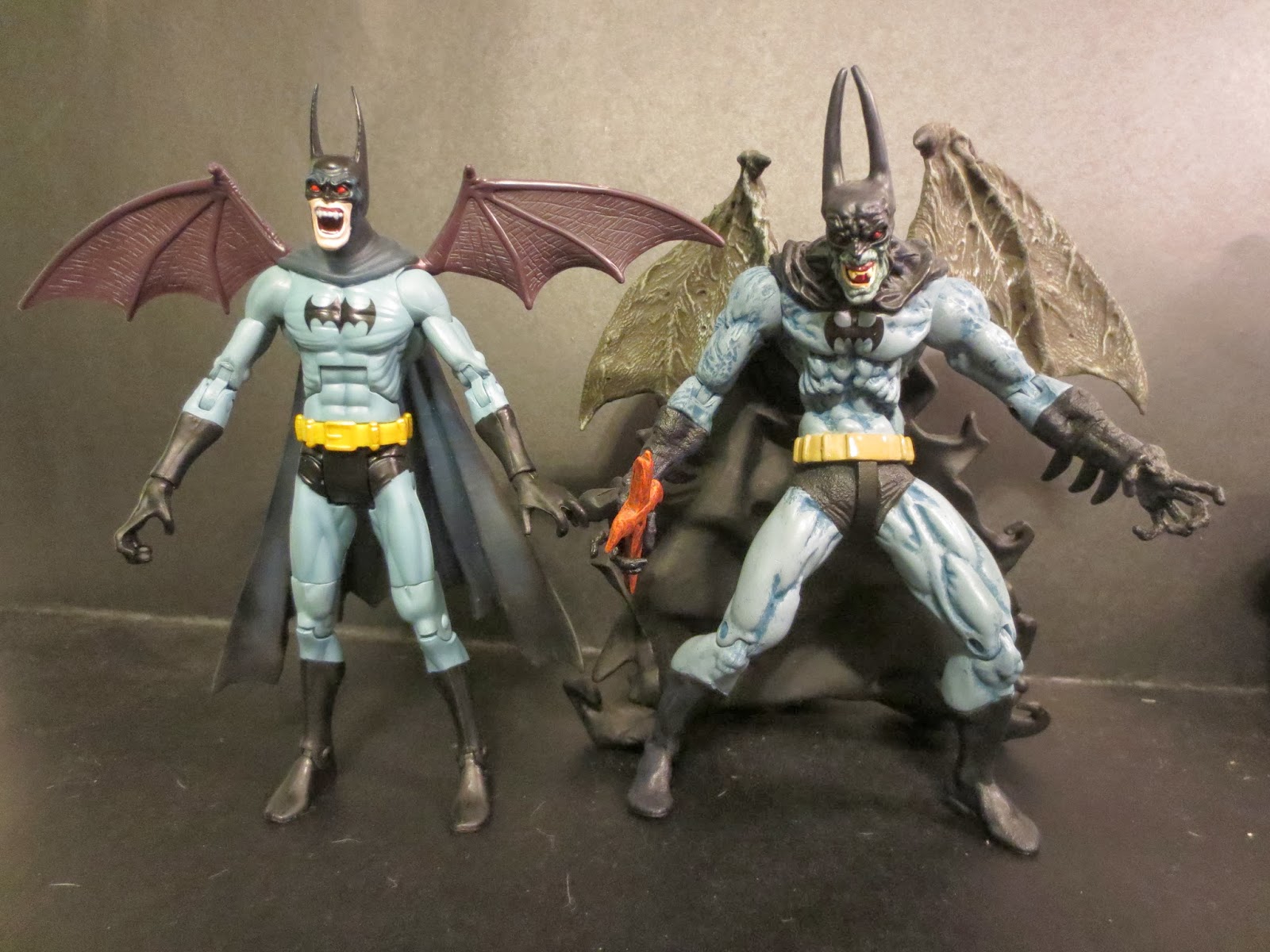 Vampire Batman stands 6 5/8 inches tall from head to toe with an extra 3/4 of an inch for his extremely long and pointy ears. There are quite a few images from Kelley Jones' art in the series that clearly have influenced this figure, so I think Mattel did a nice job in choosing how to interpret that art into a three dimensional figure. Interestingly, some parts of the body appear to be fairly unique- something that was more common with the Batman Unlimited figures than with any of Mattel's other DCUC/ DC Superheroes inspired lines. I'll note that DC Direct did release a version of this figure (called Crimson Mist Batman) as part of their Elseworlds line in 2006. That figure has a much more elaborate sculpt but less articulation. Both figures seem to reflect different depictions of the same character from the series, though, which is kind of cool. Almost like they are different levels of Batman "vamping out." 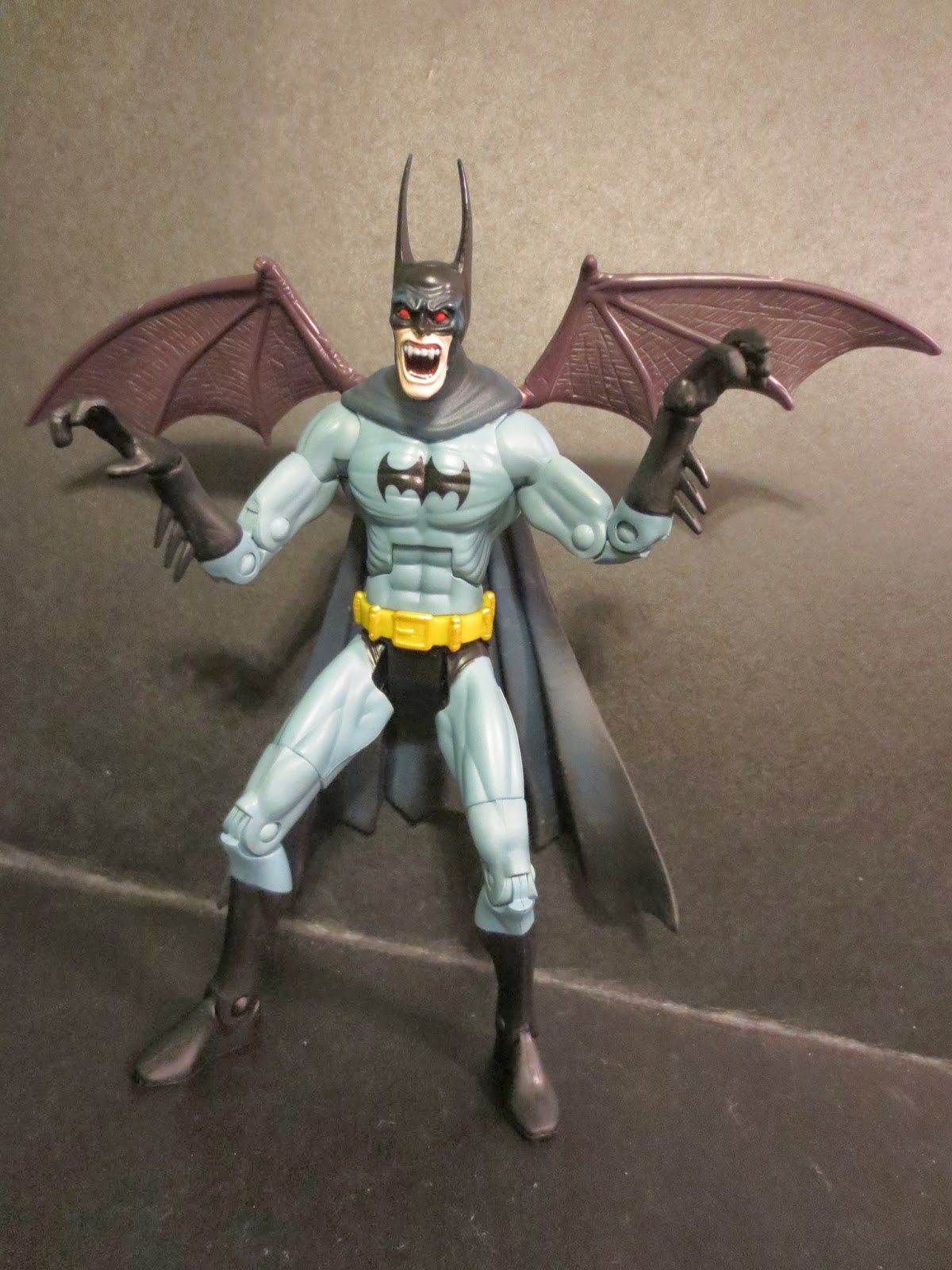 This guy is really well articulated, even moreso than than your average DCUC figure. He features: hinged ankles, hinged knees, swivel thighs, H-hinged hips, a swivel waist, an ab hinge, swivel/hinge shoulders, swivel biceps, double hinged elbows, swivel/ hinge wrists, a ball jointed neck, and swiveling wings. Yes, this guy is loaded with articulation and you can get tons of fun poses out of him. This is simply a grea figure to just pick up and play around with. I love putting him in a variety of blood sucking/ crime fighting poses. Joints like the swivel/hinge wrists and the double hinged elbows really help give him the ability to hold some dynamic arm poses, which I love. There's one negative though, and it really and truly is what is holding me back from giving this figure a perfect rating: the wings. 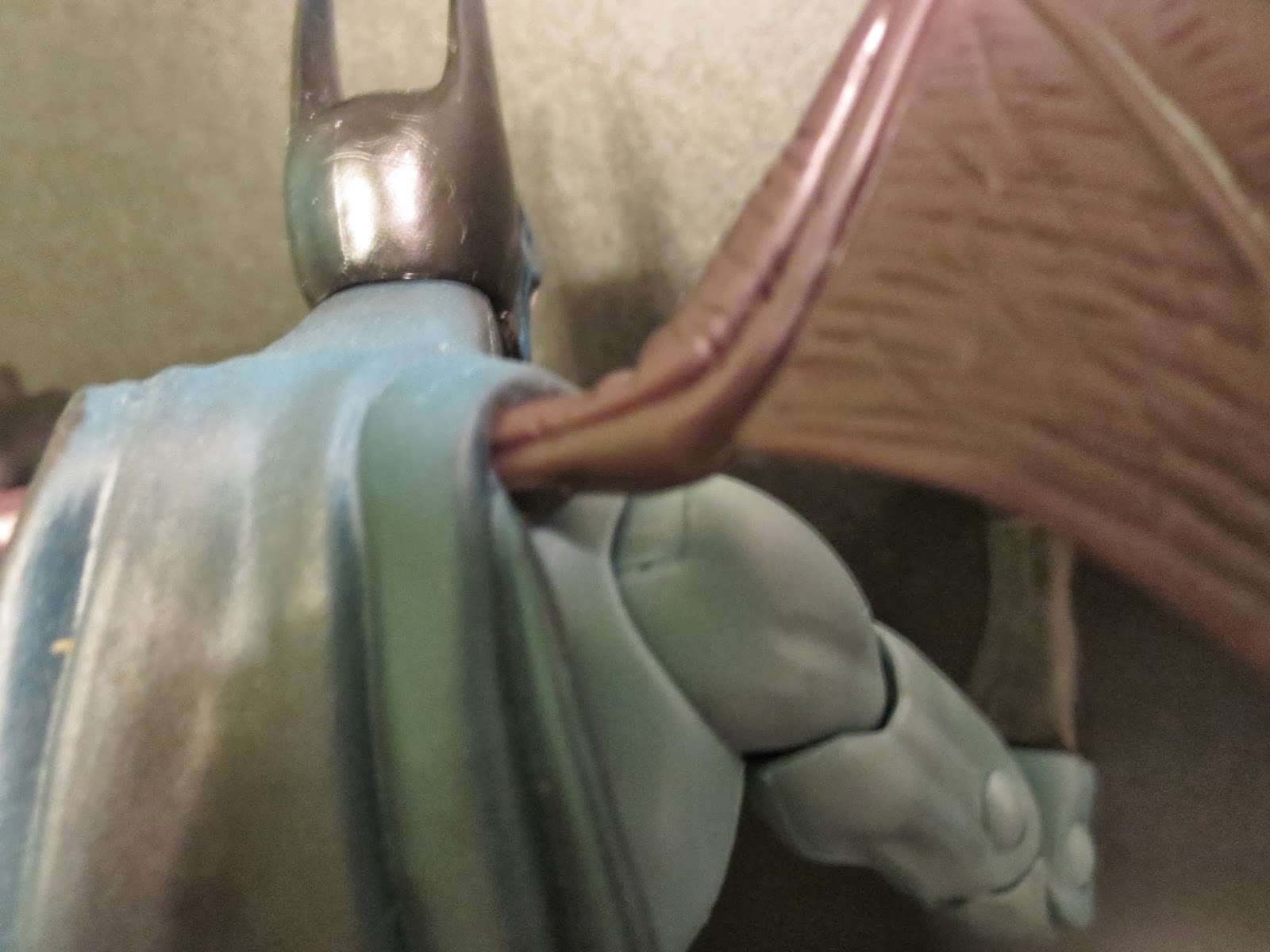 The wings do not come attached to the figure; you actually have to put them on yourself. That's not too bad though, right? Well, doing so is actually a real pain and I'm still not convinced my left wing will snap on properly. To put the wings on you have to slide them into a space in the hard plastic cape that is anchored to Batman back, get them in a hole, and push down so the plug snaps into place. I think you also have to somehow score a 20 on an invisible D20 role because I'm just not getting it. Not only is this more difficult than it should be but the wings are made of a plastic that can bend and start to show stress marks as you're attempting to get the wings to snap. My left wing will not snap and at this point I'm not pressing the issue. Don't get me wrong, it looks fine and is still rather functional, but it isn't correctly attached. 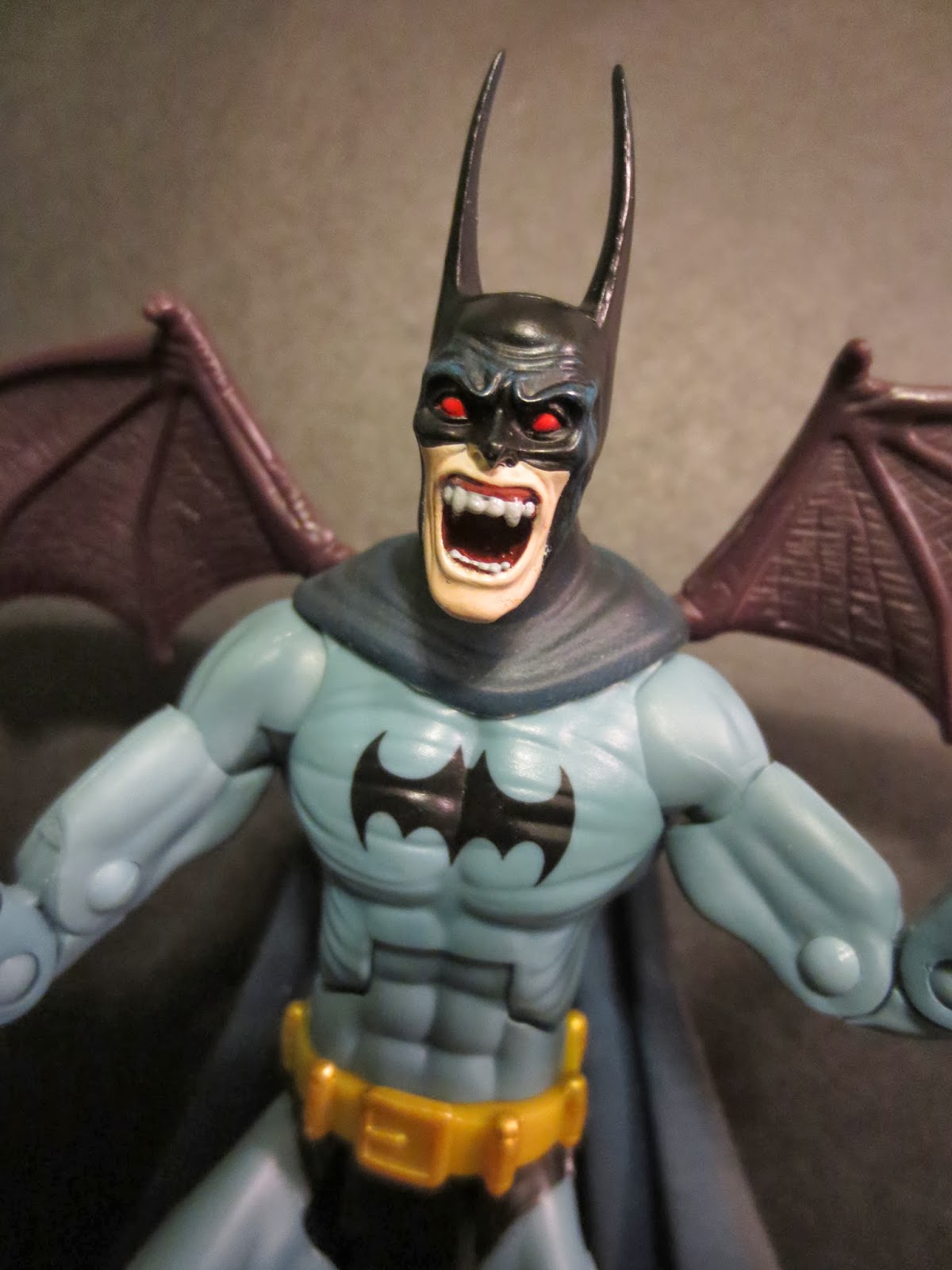 This is an interesting body for a Mattel Batman figure because Mattel combined a mixture of newly sculpted and reused smaller body parts to convey Vampire Batman's more sinewy proprotions. His torso is quite thin with visible, unusually structured muscles. He's wearing the capsule based utility belt (it works well on this sculpt) and his standard gauntlets and cape. The cape is a thinner cape that leaves room for his wings; they're very cool and batlike. Besides his gnarled hands, Batman's headsculpt is also quite frightening and really will add something new to your Batman collection. The long ears, extended mouth, and crazy teeth should certainly grab your attenion. Say it. Say it. Batman. 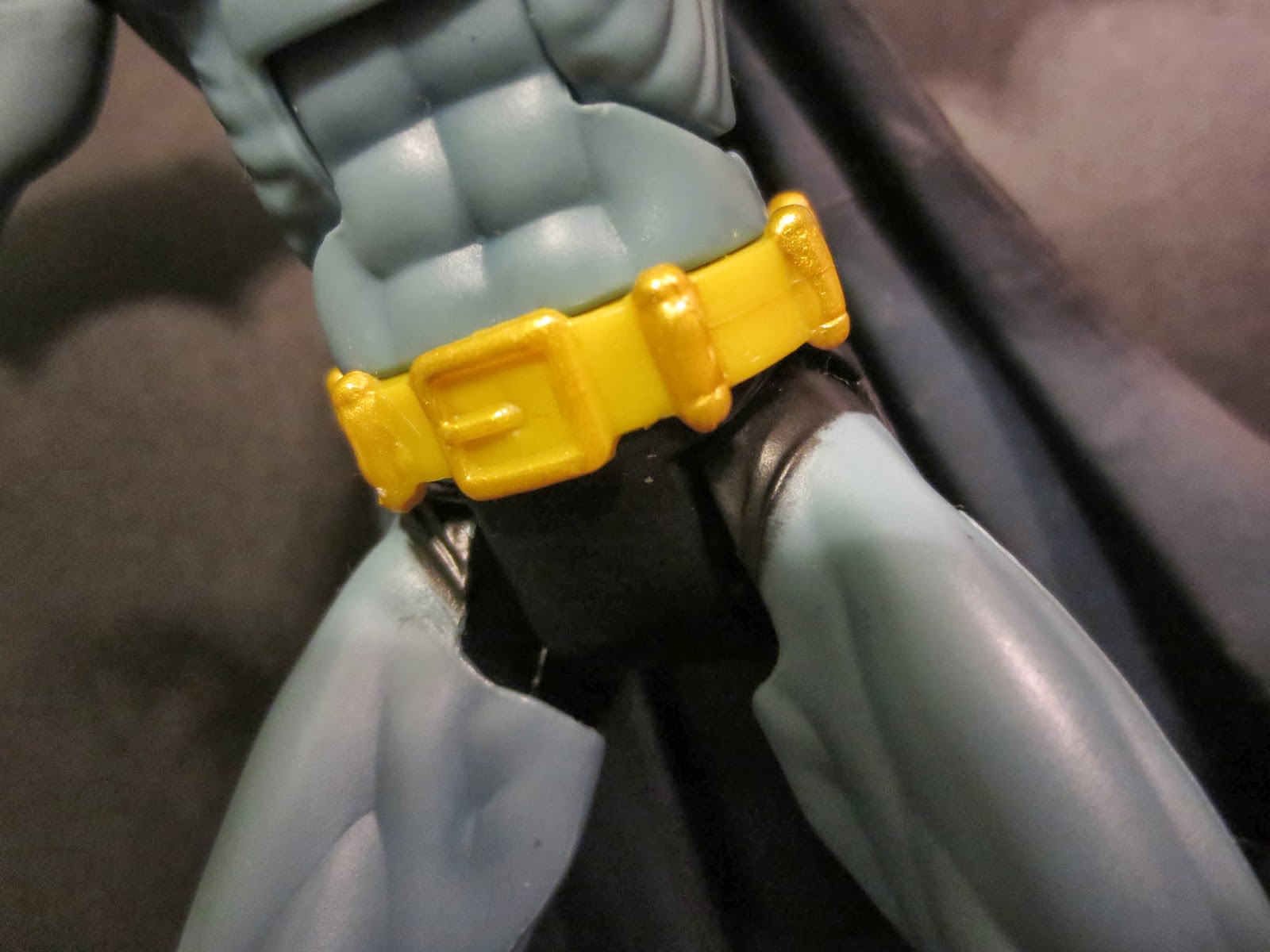 Most of the paint work is good, at least on the body. The body is molded in a light blue plastic with a dark wash; a combination that makes for a really good visual effect. There's even some similar work done on the cape. The lines on his briefs are a little messy, but the boots and gloves look fine. I love that Mattel gave the capsules on Batman's utility belt some gold paint apps as this really helps things to pop. The yellow belt nicely breaks up the rest of the darker figure. There are some things I love about the paint on the headsculpt, such as the red eyes, the subtle wash on the face, and the painted teeth, but I am a bit disappointed by the messy divison between the face and the cowl. 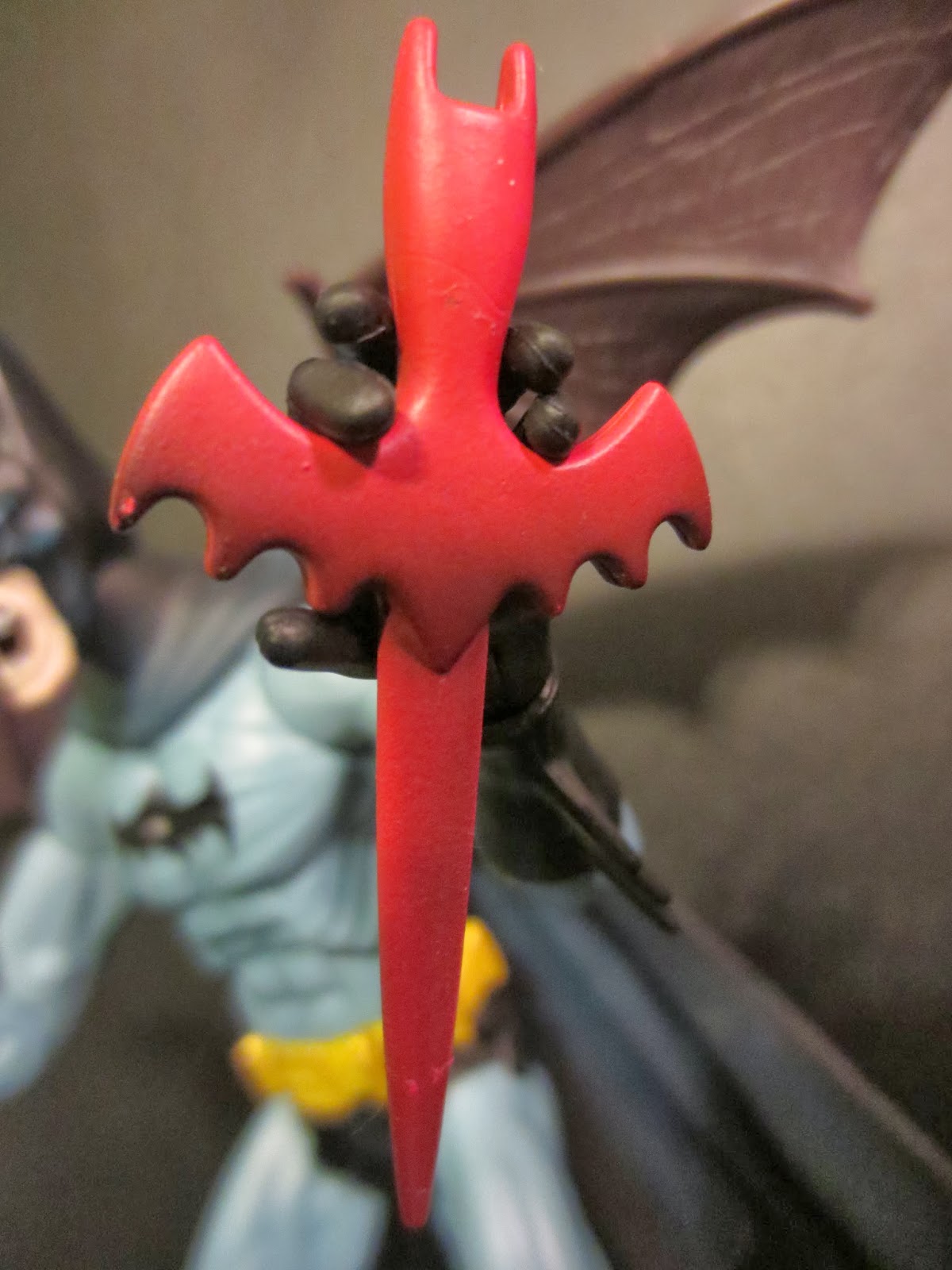 I don't know if you can count Batman's wings as accessories, but they do come separate in the package. His one true accessory is his very cool combination cross and stake that is shaped like a bat. It's a light red piece with some dark shading that can be held in Batman's hands in a variety of ways. It's not a particularly elaborate accessory but I do really like it. Batcross activate! 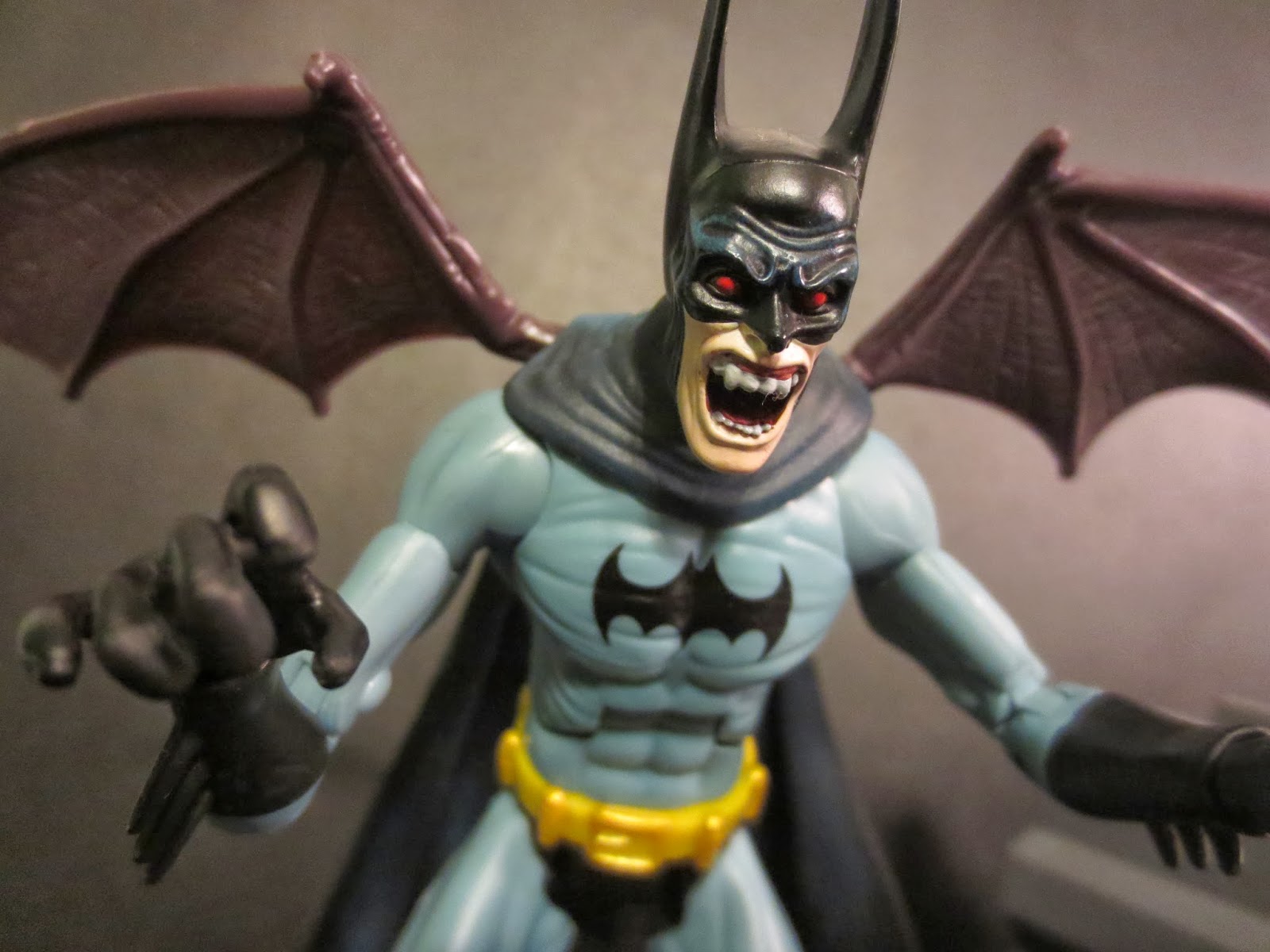 All things considered, Vampire Batman is a pretty gnarly figure. An interesting sculpt and concept that has fantastic articulation and a pretty cool accessory is defnitely worth your attention, particularly if you're a fan of Batman. I'd easily go with a Great on this figure, only penalizing it due to the difficulty of attaching the wings and the mess paint applications on the cowl/face. Otherwise, this is a figure that is equally goof for play or display. I really wish Mattel had done more to expand Batman Unlimited. Including more villains, more Elseworlds or unique versions of Batman, and more heroes like Batwoman, Robin, and Batwing may have really helped Mattel to keep this line going. It is incredibly rare for comic based Batman figures to not sell (the only Batman Unlimited figure I would call anything close to a pegwarmer was Silver Age Catwoman) and it seems like Mattel could have had a long lasting line. Ultimately, since they've had Total Heroes and DC Multiverse in development for sometime now, I think Mattel just wanted to kill this particular style of figure off for something easier and cheaper to produce. Fortunately, you can still get this guy for a pretty decent price and you can snag plenty of DC Collectibles Batman figures as they're still managing to crank them out with no slow down in sight.