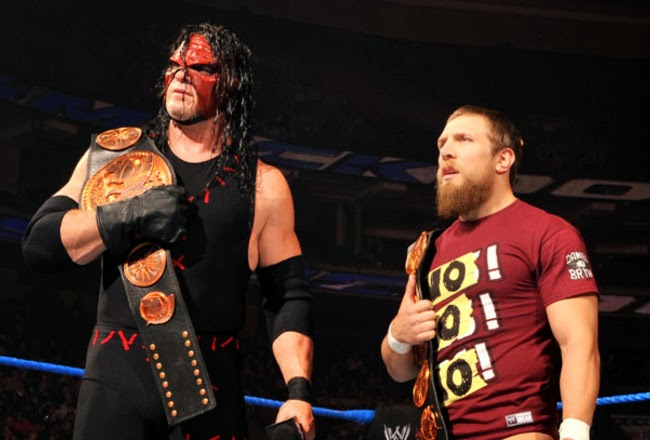 Team Hell No, is one rare recent examples of decent tag team wrestling!

Compared to the previous years of tag team division wrestling, adversity and competition has decreased. The Brotherhood, the Shield, the and the USO’s are all excellent teams with great potential, but lack the charisma as a true tag team. Teams like Edge and Christian, the Hardy Boyz, and the Dudley Boyz are hard to find. Each of these teams could capture the crowd at the hit of their theme song and prepare each fan for a well-executed match. Of course wrestling has changed over time due to the increased promotion of family entertainment, but fans would still like to see teams with a little more edge. After the break we will analyze tag teams from different generations and try and uncover the change from one generation to the next.... 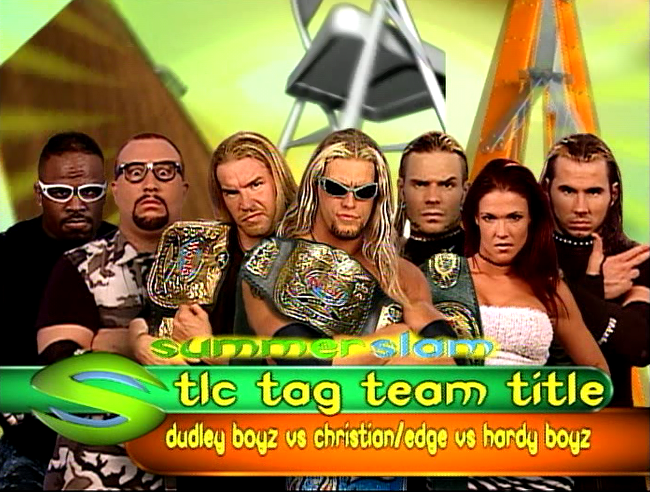 The attitude era saw a renaissance of tag team wrestling thanks to the talents of:
Edge and Christian, the Dudley Boyz, and The Hardy's!

Blood is thicker than water, and having a brother as a partner can create a family advantage. In the late 90’s and early 2000’s a pair of brothers rose up to the level of extreme. Matt and Jeff Hardy were taken under the wing of Michael Hayes and developed into a team that was like poetry in motion. Their hardcore attitude and edgy style gave fans a dynamic duo to idolize. The future for this team was a twist of fate as they led fans to shocking moments with tables, ladders and chairs along with Edge and Christian and the Dudley Boyz. Since then, the WWE has lacked an extreme tag team division that was not afraid to go through tables and get speared off of a ladder. These matches revolutionized hardcore wrestling which we do not see any more of. Strong rivalries existed during this generation of tag team wrestling and fans craved to see more of it. Battles with Edge and Christian were always heart racing. 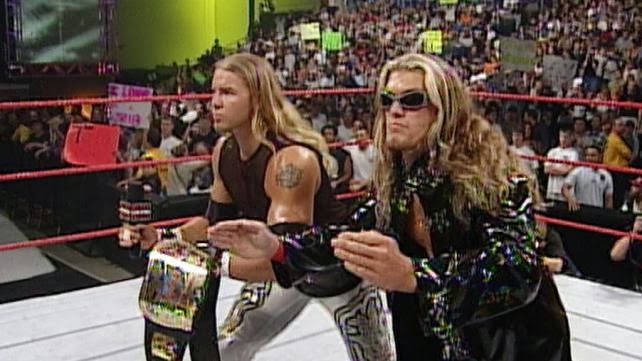 The 5 Second pose made famous by the talents of Edge and Christian!

Edge and Christian showed the comedy side of being a tag team, but had the guts to back it up. These best friends from Canada were often remembered as being a part of the Brood with Gangrel. This stable helped to create a strong beginning for the future of tag team wrestling as Edge and Christian grew to form with their own team that “reeked of awesomeness.” These superstars knew how to get the crowd on their feet whether it was waiting for the spear or the 5 Second Pose for those with the benefit of flash photography. Along with the Hardy Boyz, Edge and Christian created a competitive environment in and out of the ring that always had story lines buzzing with fans wanting more. 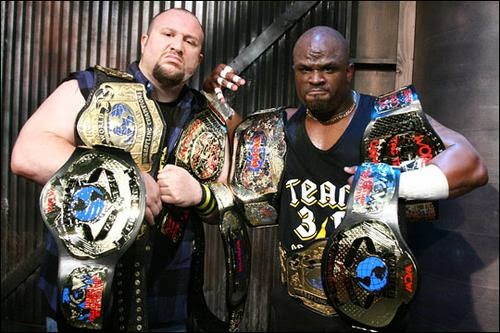 Sadly the days of decorated tag teams like the Dudley Boyz
seem to be slipping by the wayside in toady's professional wrestling!

When the Dudley Boyz, were added to the WWE roster, fans no longer knew what to expect with this generation of tag team wrestling. Almost every match ended with someone going through a table and the crowd continuously yelling “3D.” Bubba Ray and D-Von Dudley were unlike any other tag team, they were rebels without a cause ready for a fight.  The duo went as far as putting AARP card carrier Mae Young through a table on live television. With ruthless aggression, these three teams defined and era of wrestling and gave different meanings to tables ladders and chairs. The Hardy Boyz, Edge and Christian, and the Dudley Boyz set the standard for tag team wrestling.

That's it for part 1 of this article, in part 2 we will examine some upcoming tag-teams duos that can hopefully rejuvenate the tag team genre!