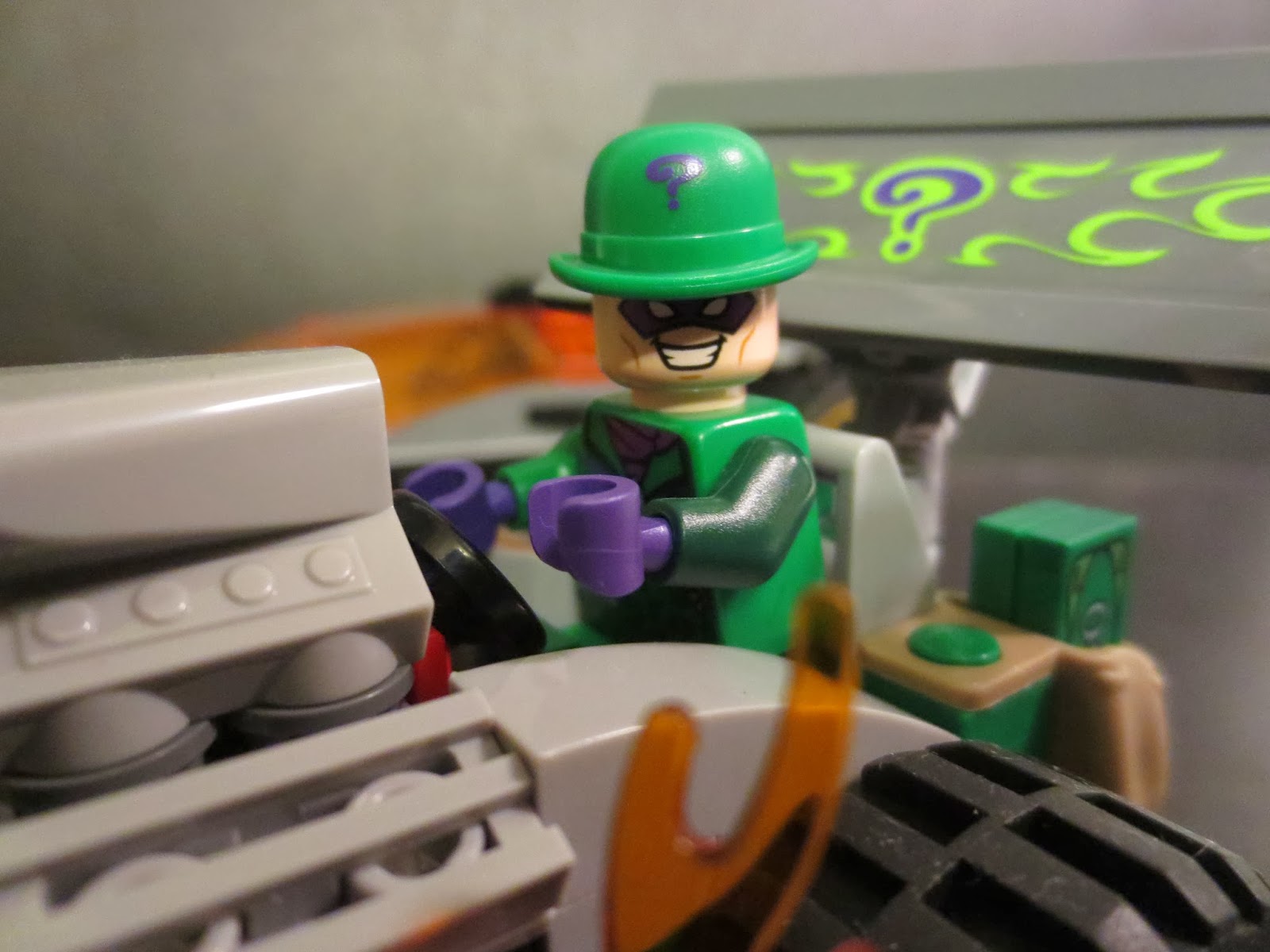 I remember that when I was in middle school my friend Felix was much more of a Batman fan than I was (Batman was like a slow burn for me, erupting into a full grown obsession the older I got) and when we'd spend weekends constructing Lego cities, Felix would devote a great deal of time trying to construct a Lego Batmobile. While there were some cool sets available when I was in middle school (this would have been the mid 90's) we definitely weren't at the point where Lego had started releasing licensed sets. I think Lego would have been irresistible to me back then if Star Wars and Batman sets had existed! Heck, they're irresistible to me now! Today I'm looking at one of the new 2014 DC Superheroes sets: Batman- The Riddler Chase. It's been showing up at many stores alongside of Man-Bat Attack and looks to be the second largest set being released this year (only four sets have been revealed with two of those coming out this spring). Ready for a look at The Riddler Chase? Then join me after the break.... 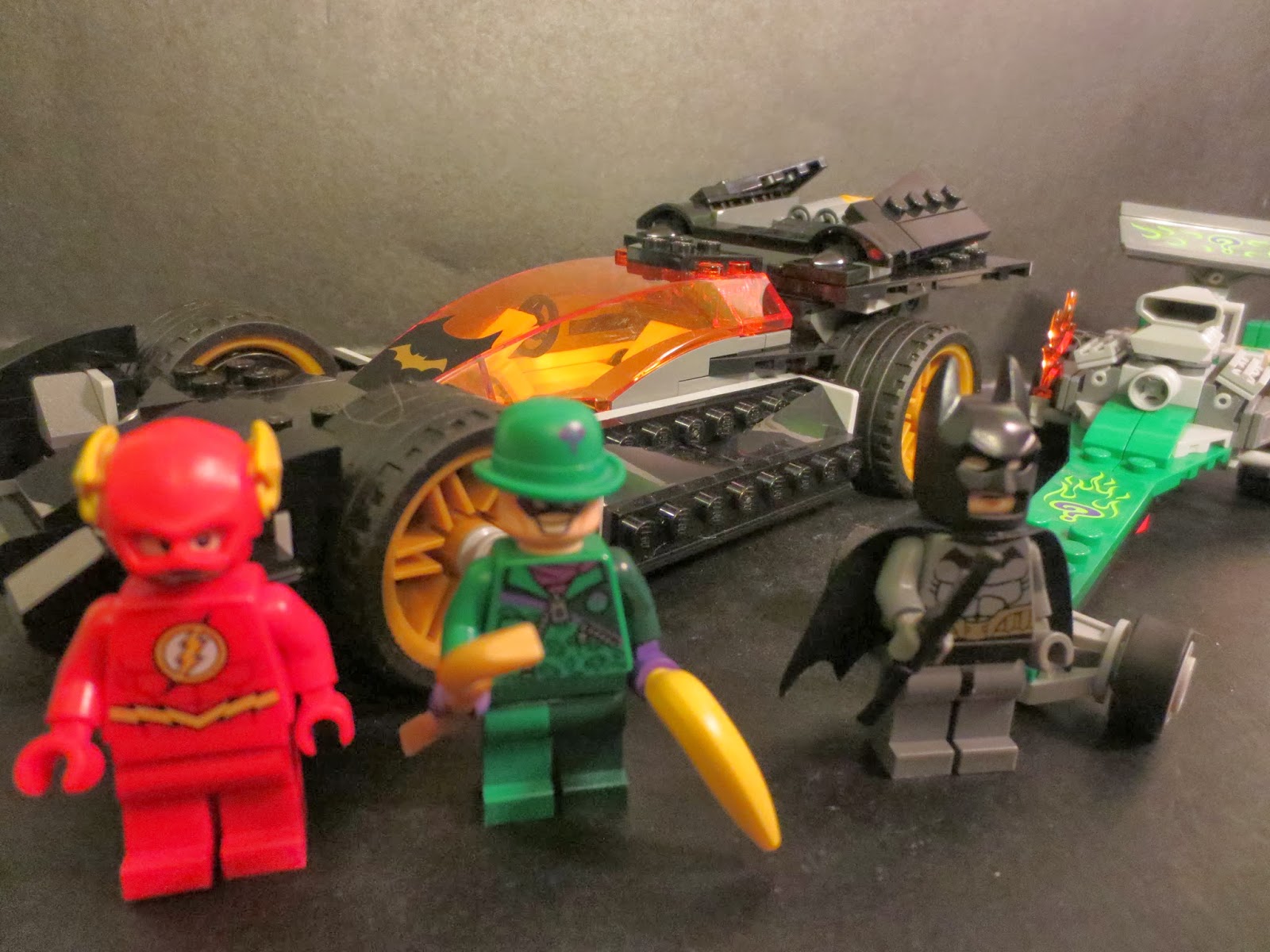 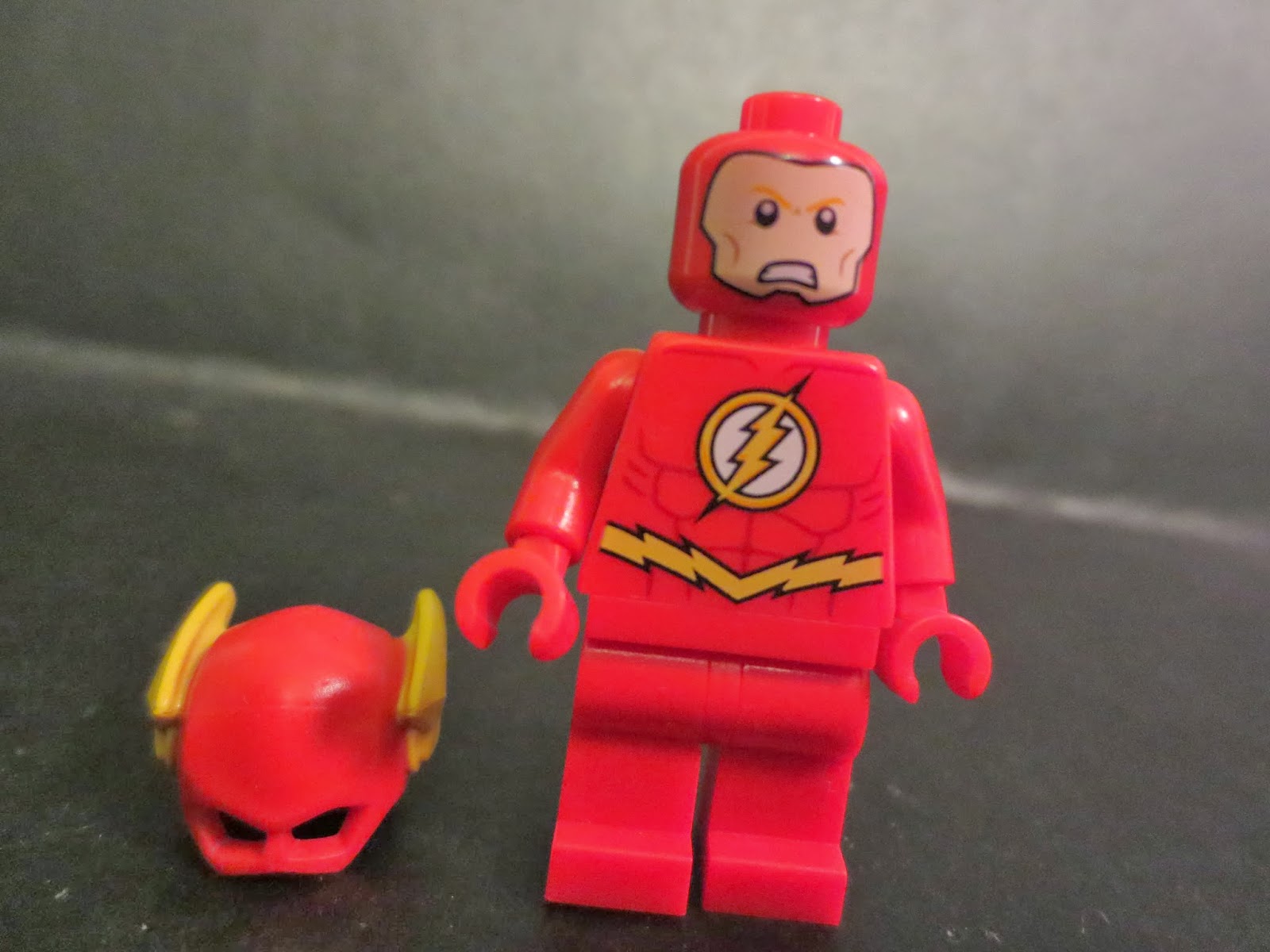 While collectors of Batman and DC Superheroes Lego sets probably already have a Batman and a Riddler, they won't have a Flash. I think it's safe to say that Barry Allen is the main draw for minifigure fans in picking up this set. Based on his design in The New 52, Flash's outfit some nicely detailed printing on his torso (both front and back). His cowl is a removable, rubbery piece with painted yellow wings on the sides. His standard head shows Barry's face in a hood and is reversible to allow for either a smiling Flash or angry looking Flash. I like him quite a bit. 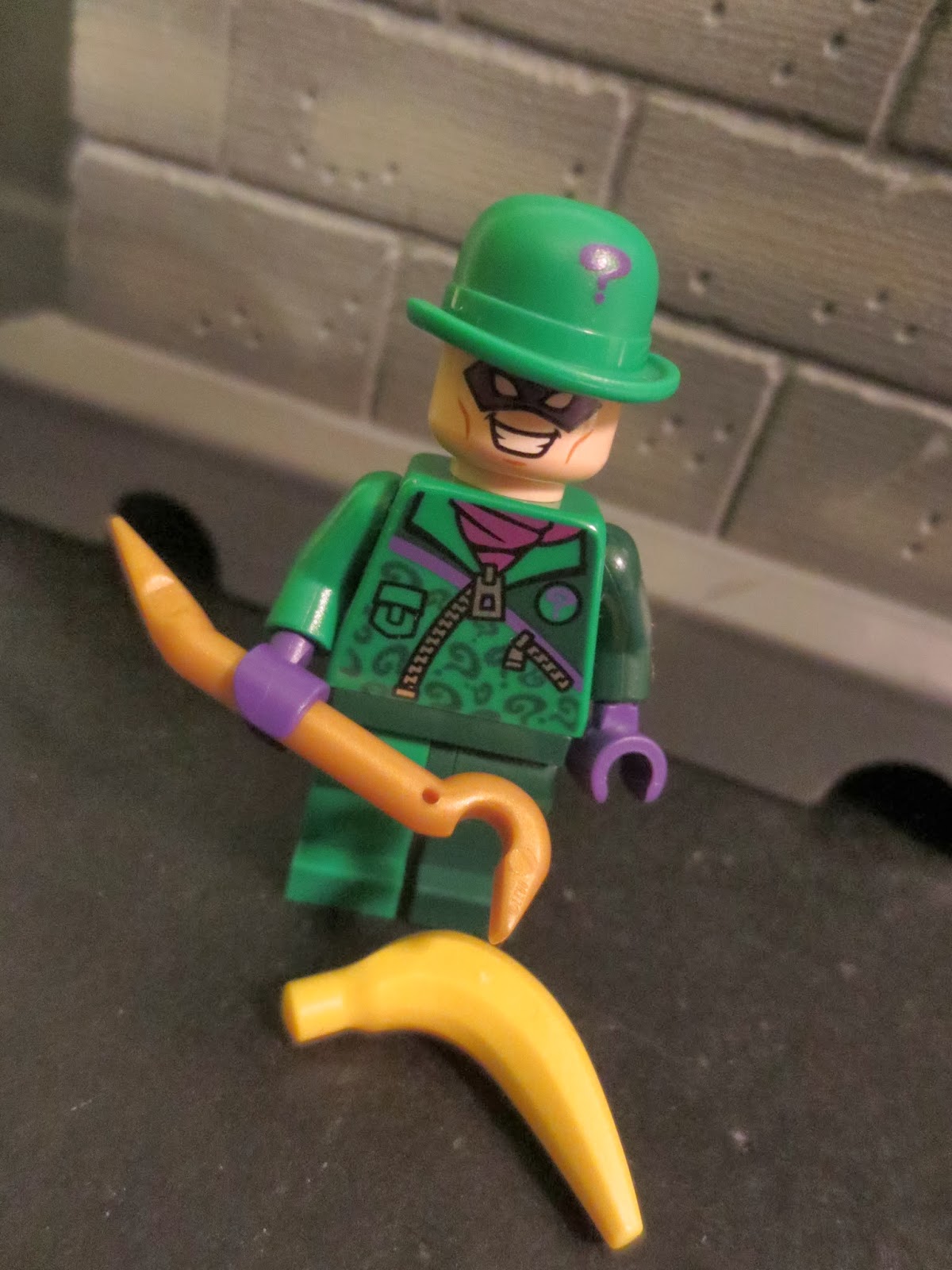 I'm not really sure this Riddler Lego minifigure is based on any specific appearance of the character. He might sport some stylistic cues from the New 52 Riddler, but his jacket looks more influenced by his included drag racer. There are quite a few neat details on the torso printing including a question mark pin or patch and the tails of a purple racing scarf hanging down his pack. The legs and arms are also different shades of green, a detail I found to be rather interesting. Riddler comes with his green bowler hat (with a purple "?" on it) and a gold crowbar that resembles his cane. Oh, and he also comes with a banana. It's either to trip up the Flash or because Riddler is happy to see you. Your call. 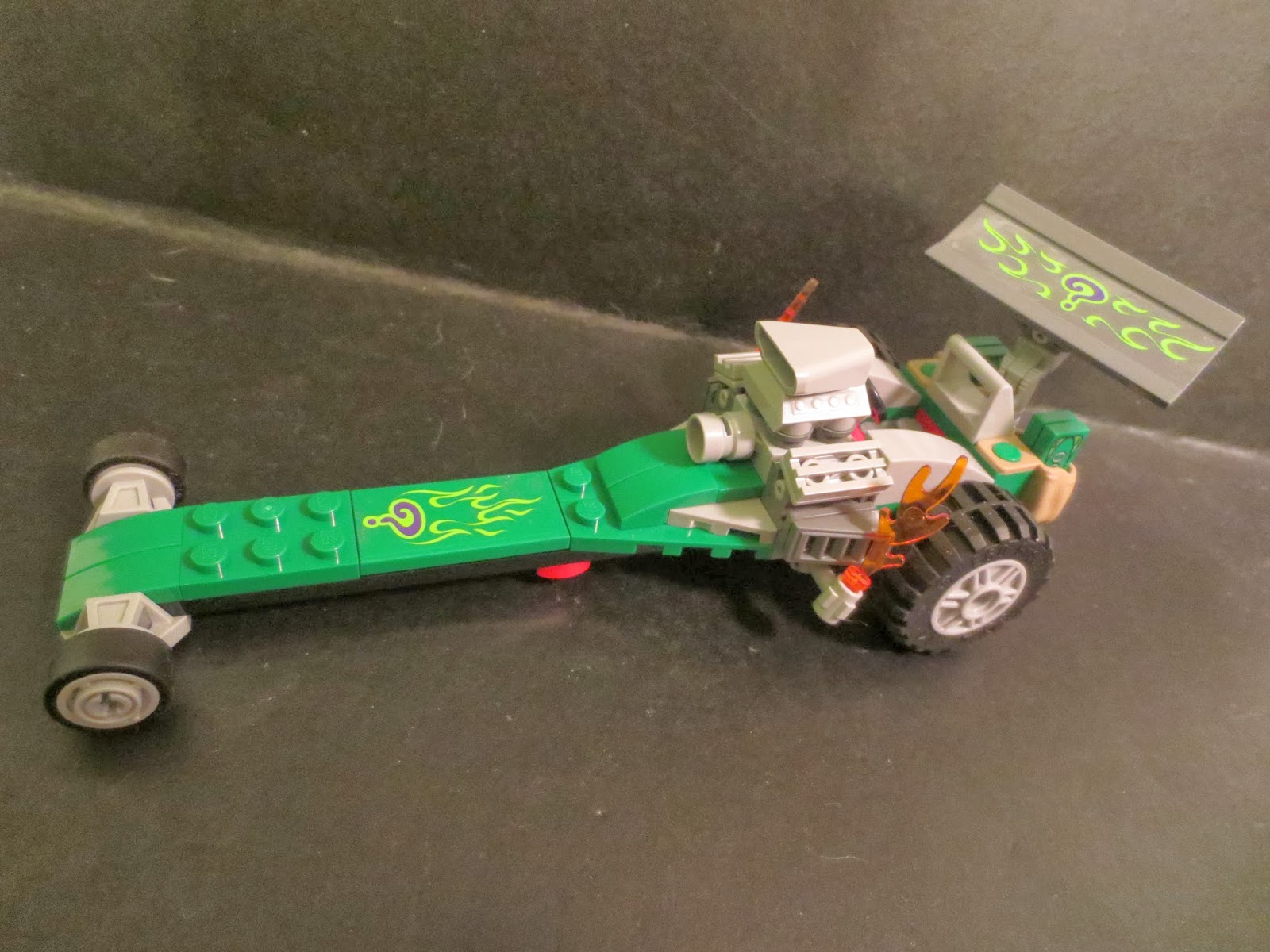 The Riddler's vehicle in this set definitely matches the theme: it's a stylized top fuel drag racer. The elongated car is definitely a unique vehicle for the DC Superheroes line, but I can see the Riddler definitely finding a vehicle of this kind quite clever, particular when eluding the Flash. Lots of green definitely ties it to the Riddler, as does the purple question mark decal on the front. 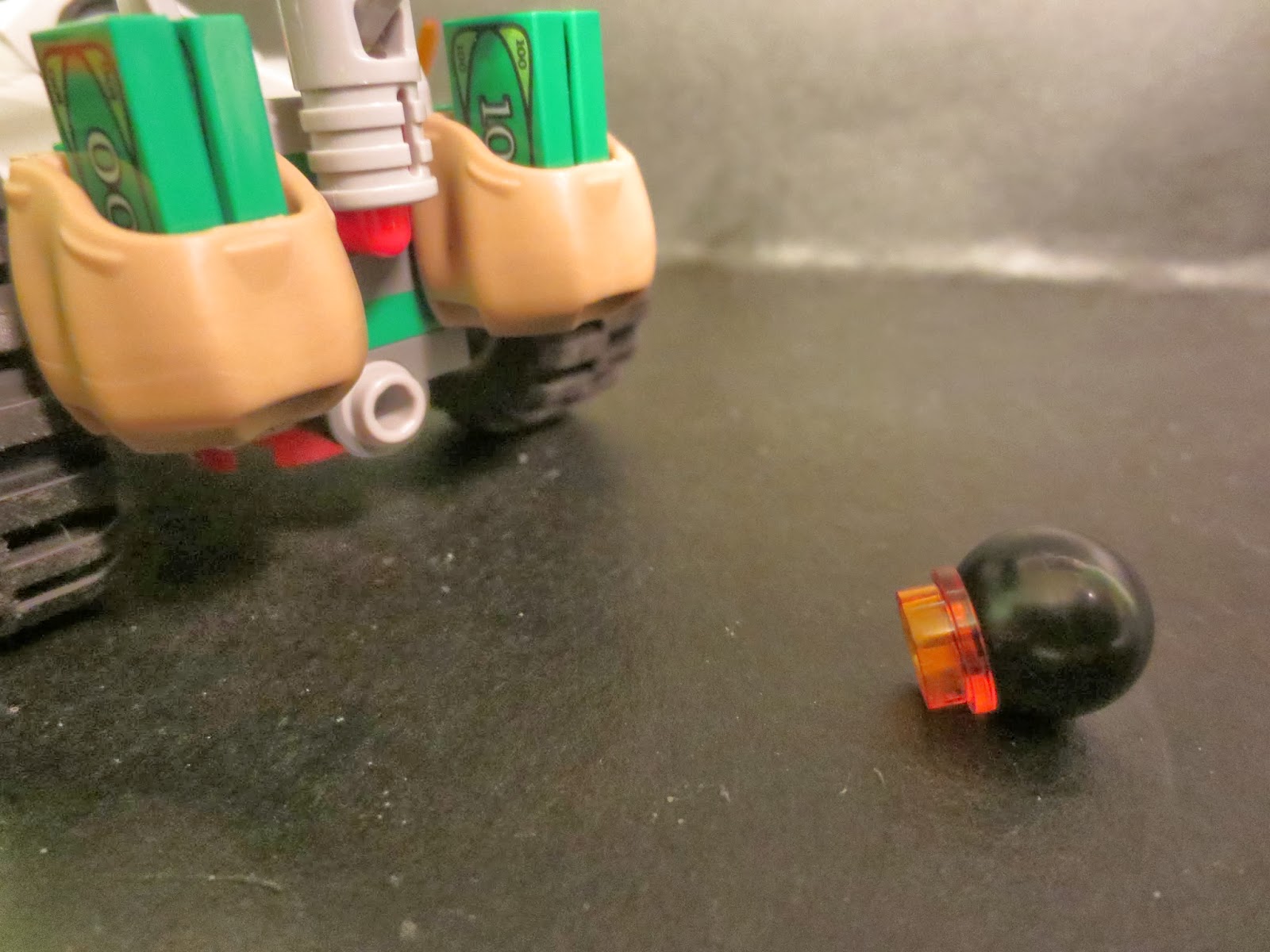 There is actually a launching projectile on the back of the dragster. Push down on the rear wheels and friction causes a round projectile to be launched from under the car. It works pretty well, but it's tough to control. Still, seems handy for keeping pursuers at bay. The huge engine is a pretty cool build and I love the way that the flames are depicted as spraying out of the side exhausts. This is a pretty neat little cockpit and might even appeal to non-superhero Lego fans who simply want more race cars. I like the huge spoiler, but I wish it stayed on a little tighter. It's rather loose and tends to flop around. 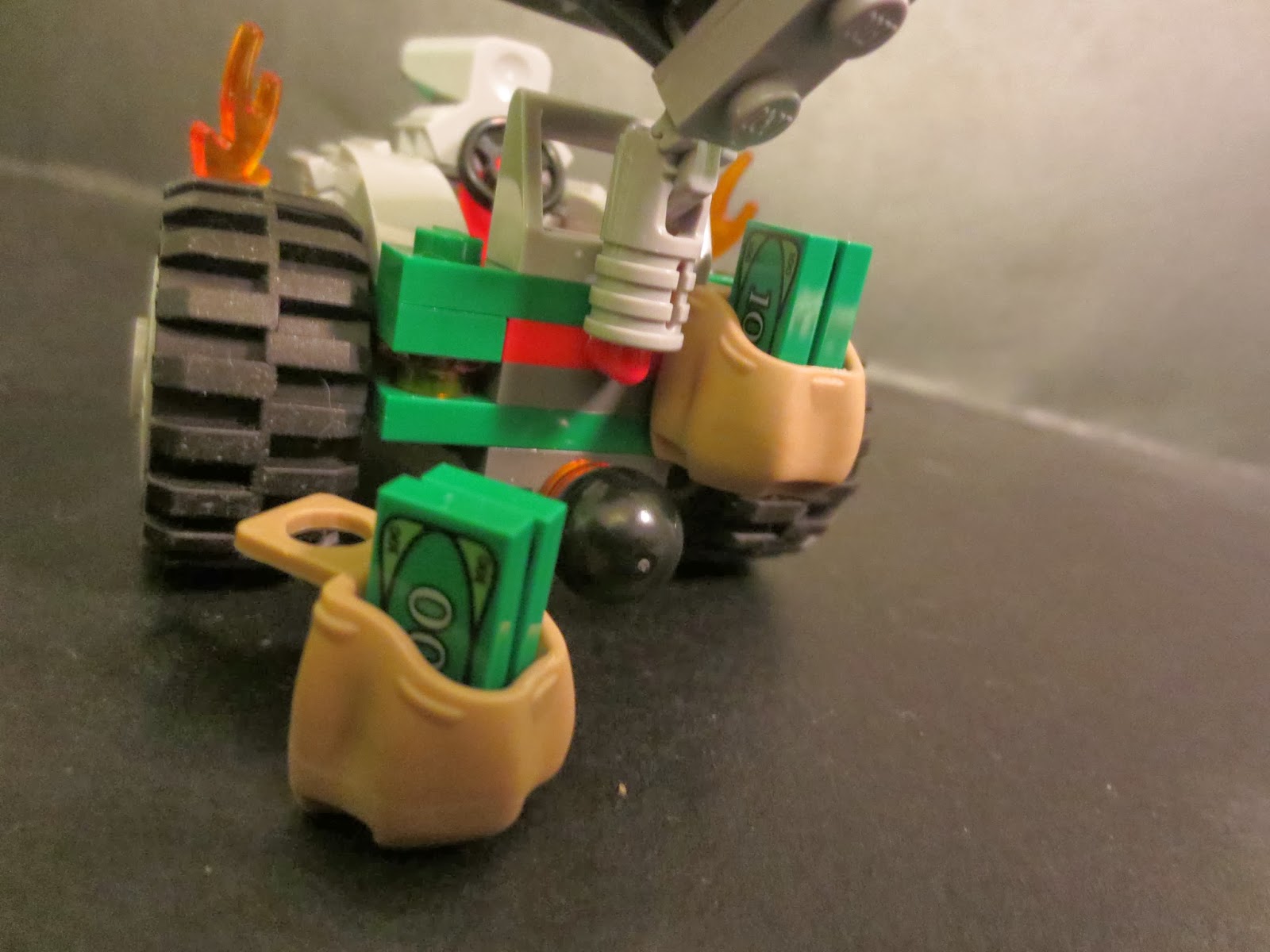 Along the back are two sacks of money. Each sack contains two money tiles. They have a tendency to fall out when the car is moving, so be careful not to lose them. You can actually remove the sacks so that minifigures can wear them like backpacks. 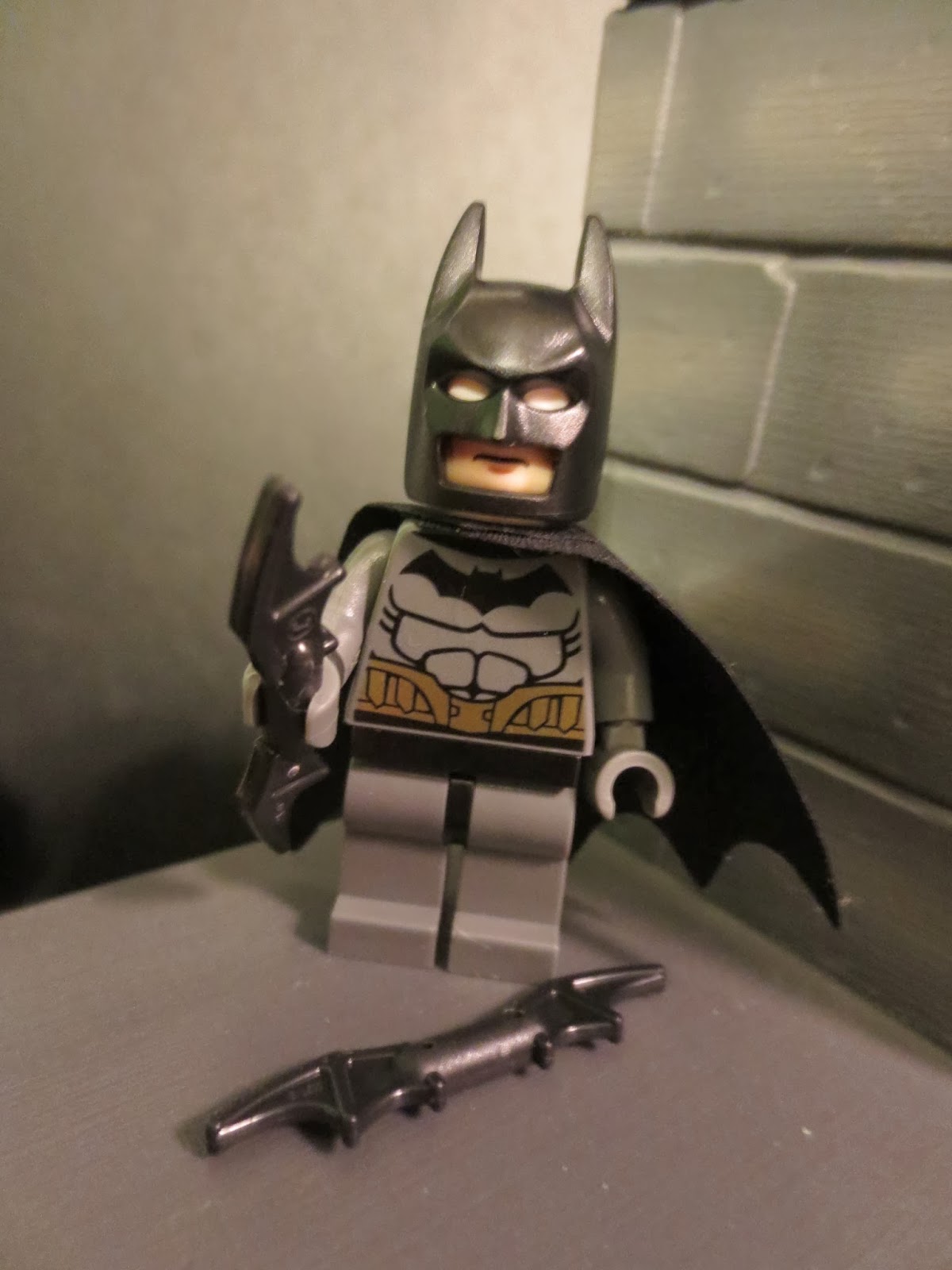 The third and final minfigure in this set is Batman. Not only is this a new Batman minifigure but it's also a New 52 styled Batman. He looks quite nice with his grey base body and black highlights. He has the same face printing as the rest of the Batman minis and also wields two Batarangs. I like him, although I doubt he's the highlight of the set for most fans simply because if you've bought any other sets in this line you'll have plenty of Batman figures. 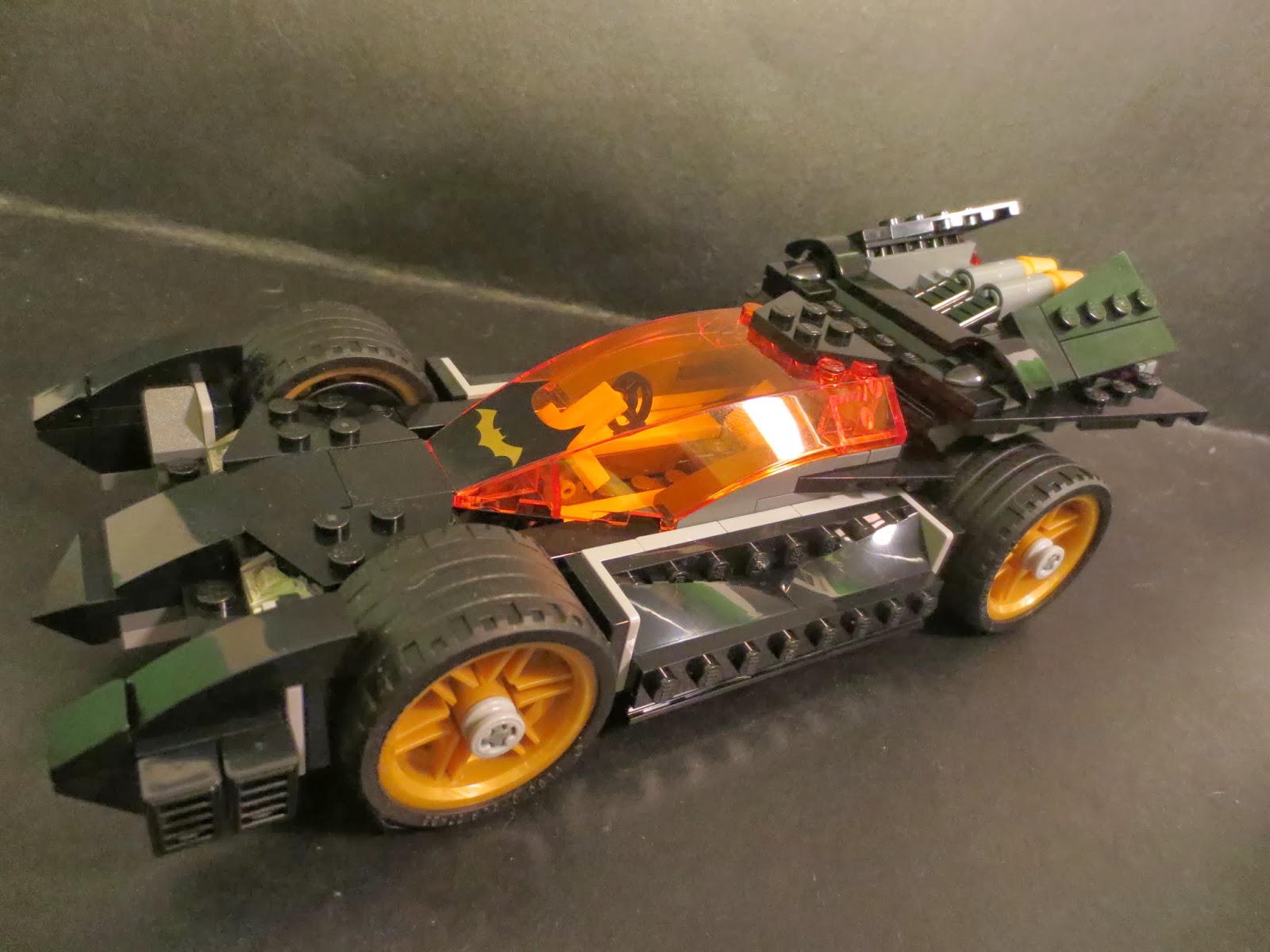 The Batmobile is probably the biggest draw for this set (it's either that or the Flash minifigure) as this looks like a more modern comic styled Batmobile as opposed to the former DC Superheroes Batmobile that took its visual cues more from the Burton styled Batmobile. Once it's built it is of course mainly black, but it also has some gold details and an orange cockpit windshield. It's definitely wider and a bit heftier than the previous Batmobile from 2012. 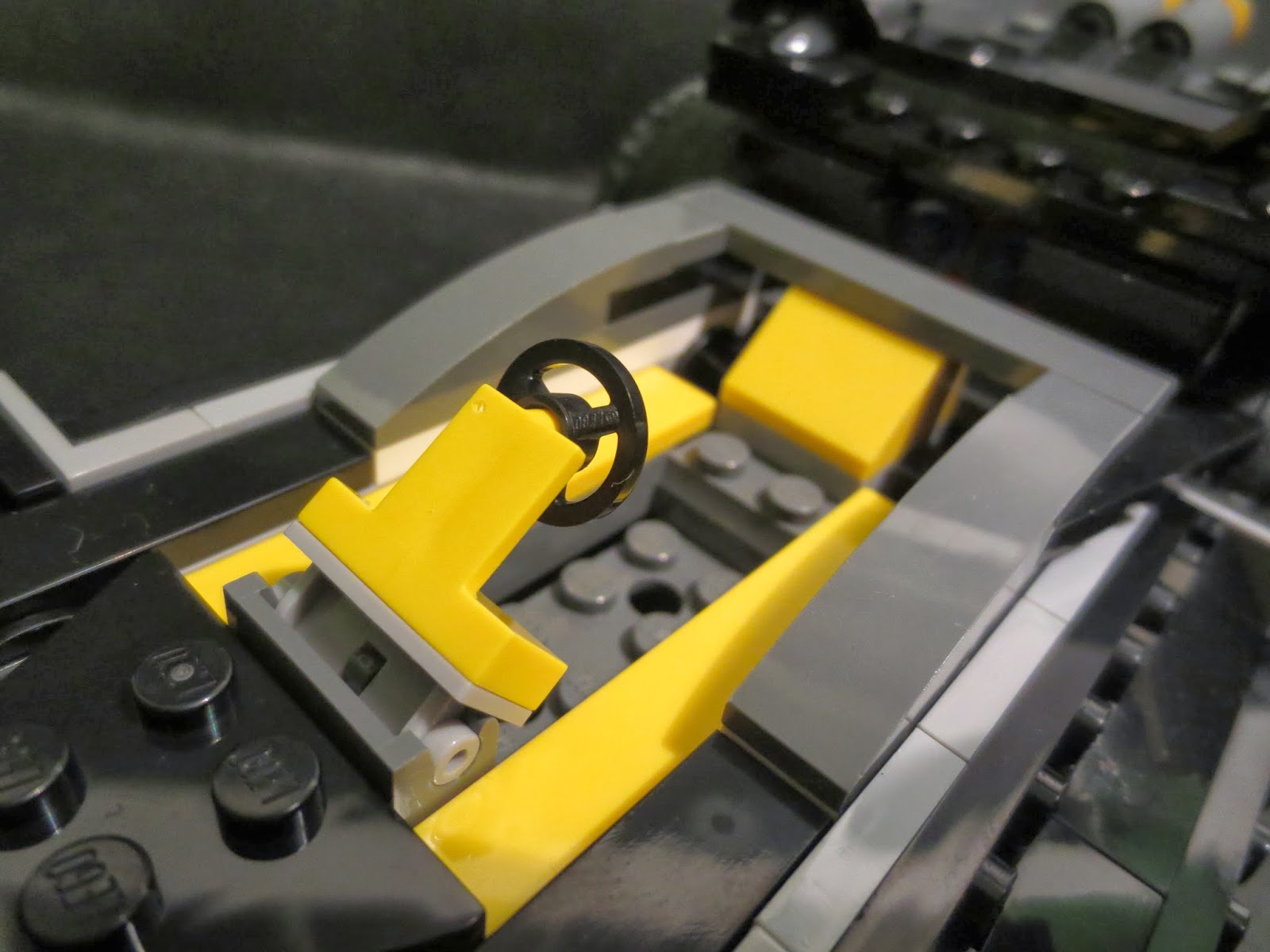 The interior of the cockpit seems nice and armored although there aren't any interesting details like panels or anything. The steering wheel is on a hinge, though, to allow for maximum Bat-comfort. Interestingly, the cockpit's dome is not on a hinge but is simply a removable piece. I thought this was a little strange as hinged domes are pretty easy to do in Lego. 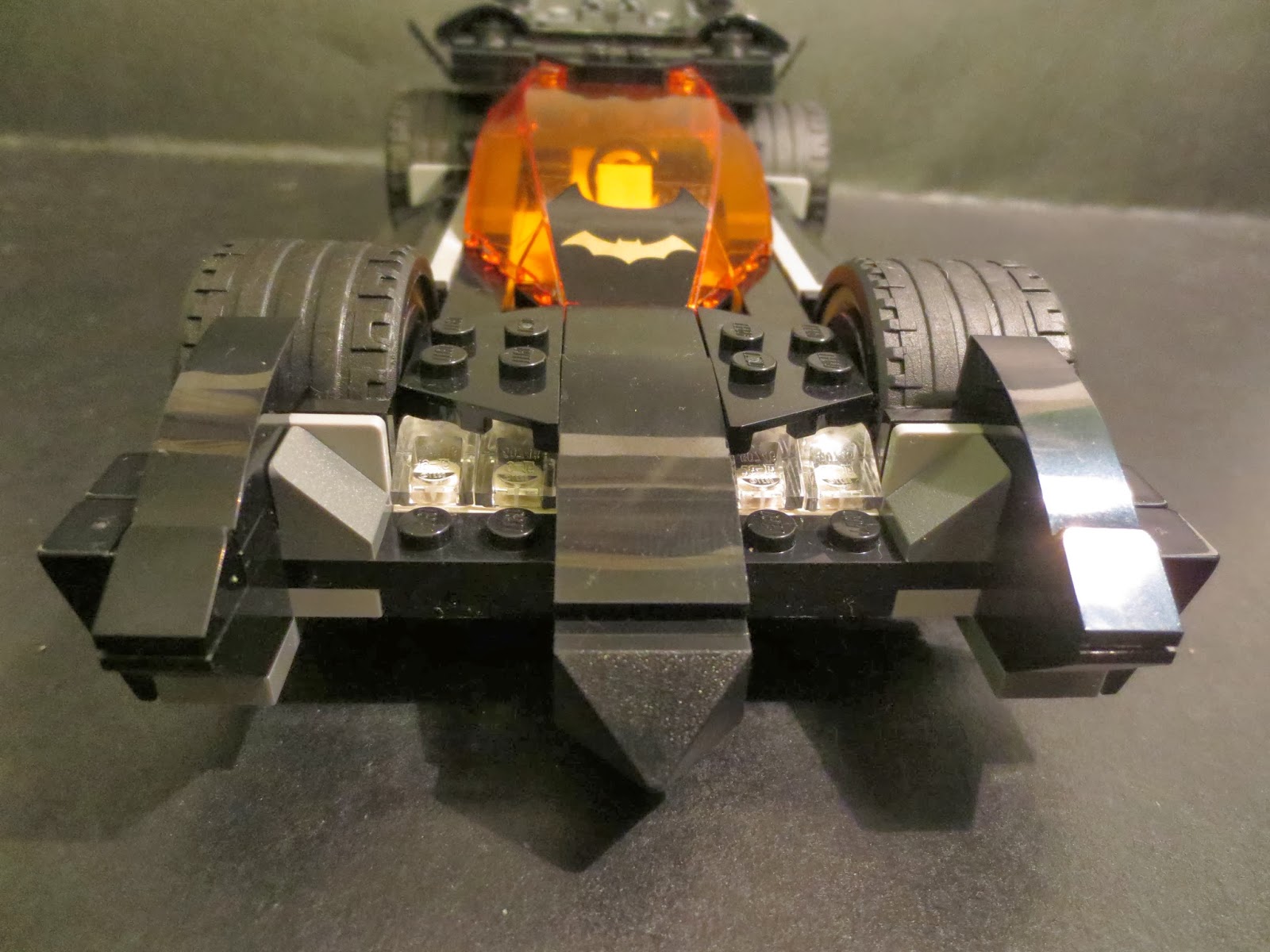 The front of the car is really impressive. I love the way the various bricks make up a very cool hood. The headlights look nice too. There's definitely some impressive styling to this ride, no doubt about that. 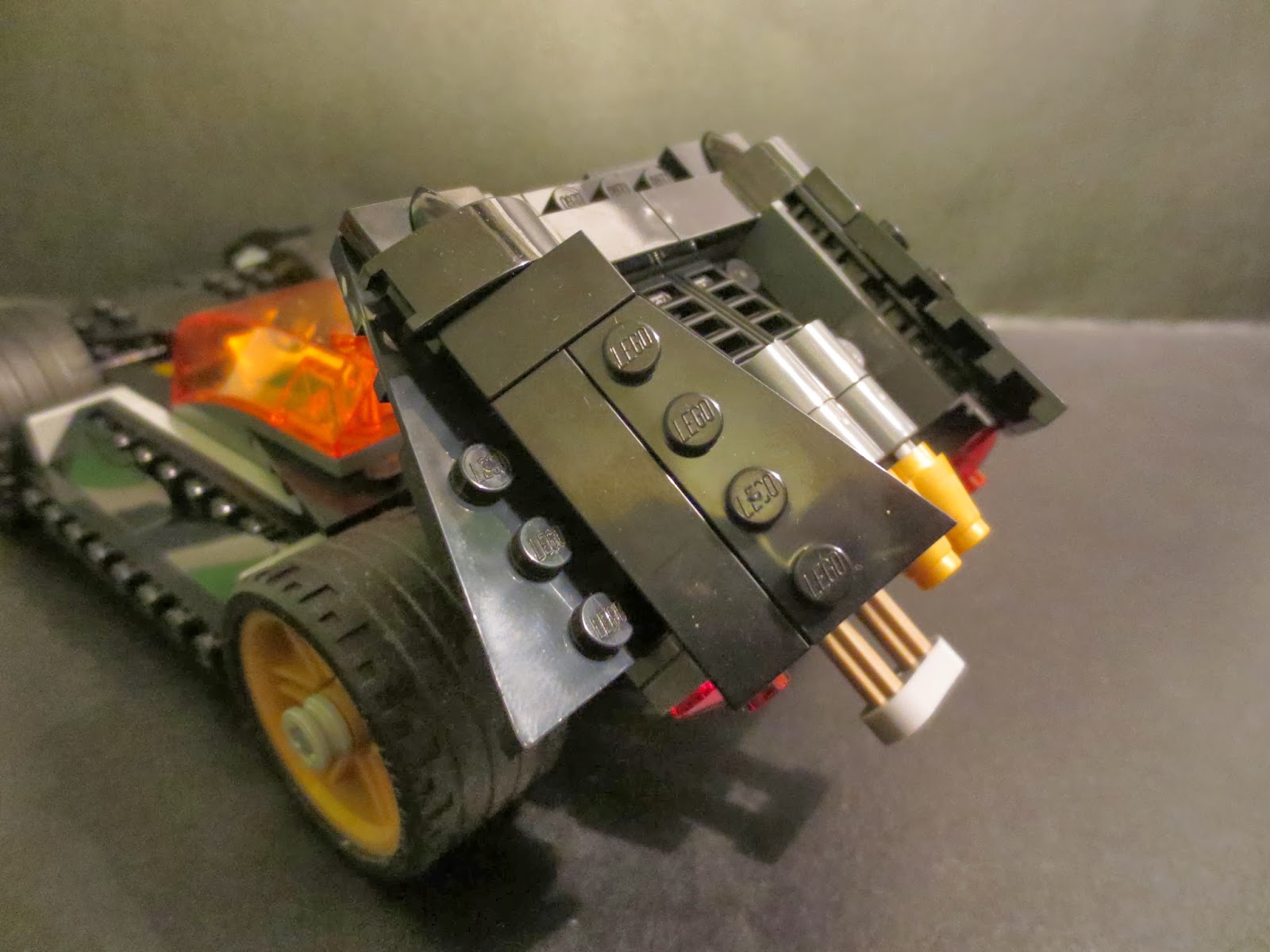 The rear of the car lifts up on two large arms and reveals two missile launchers. It's a fun feature and one that doesn't in any way effect the look of the vehicle. It folds down easily and you would never know it was there if you're simply wanting to display this model. Or if you hate fun. If you hate fun, you'll be glad this feature exists. Why would you buy a Lego set if you hate fun, however? 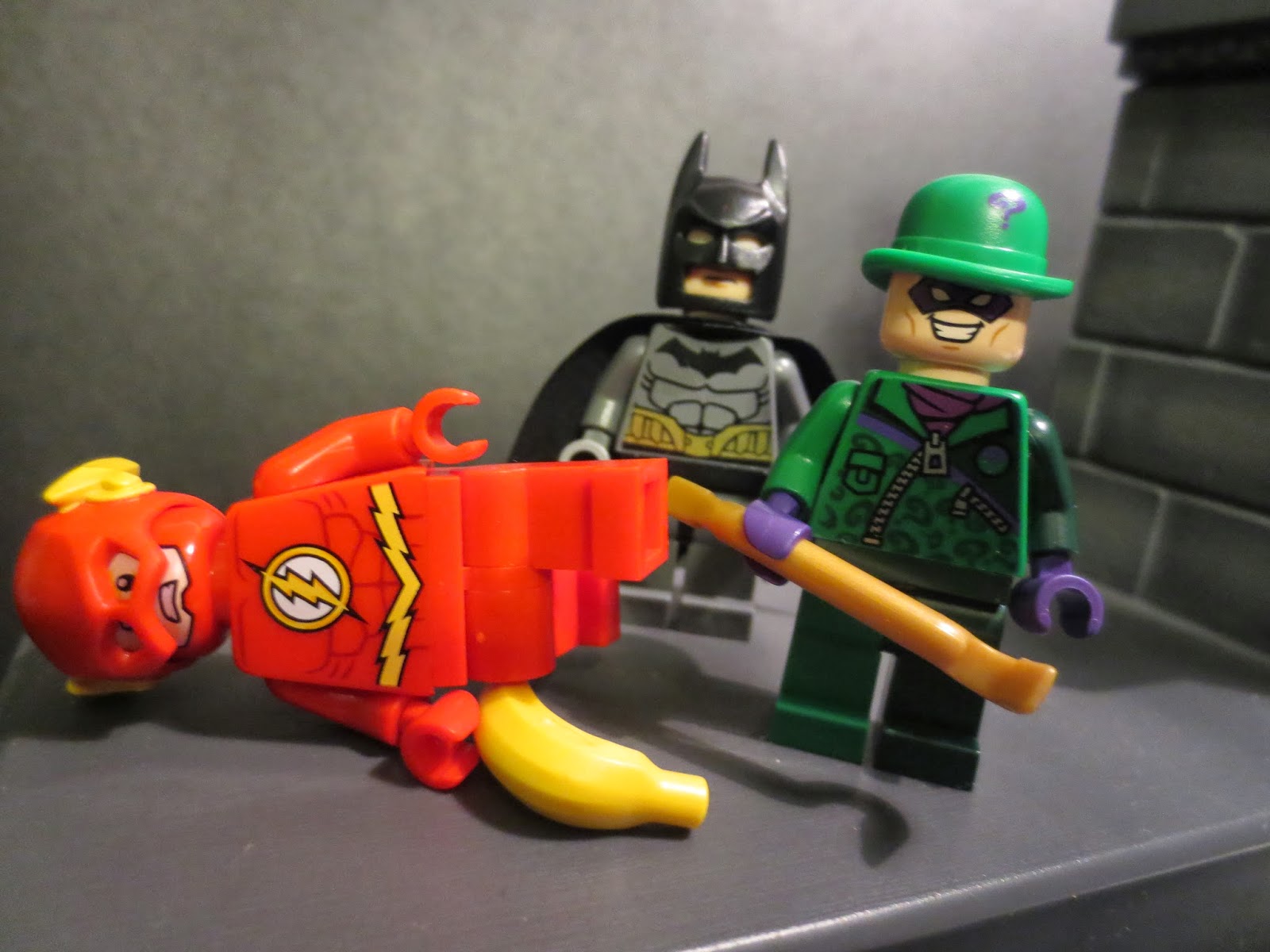 This certainly isn't a bad Lego set at all: 3 minifigures and two fairly substantial vehicles makes for a lot of options. For a kid or a new collector, the fact that you get Batman, an ally, and a villain along with the Batmobile and a vehicle for the villain is a pretty sweet deal. Right from the box you have everything you need to have an adventure. If you've been collecting this line for awhile, though, while you're getting new versions of Batman and the Riddler, you're still getting two characters you already have and a vehicle you already have (the Batmobile). It's still good, but it's not expanding your character roster or anything. While the quality of the set is utterly fantastic, overall I'm giving the set a Good and a 1/2. If you don't have any Batman Lego sets you could easily bump this set up a few notches. I think one of my dislikes is that I'm just not wild about the Riddler's dragster. It's not terrible, but it's just not something I would have initially thought of as a vehicle. I hope Lego begins to implement more DC characters and vehicles into this line, even if they keep Batman as the focus. That would seem to be the best way to approach things moving forward.