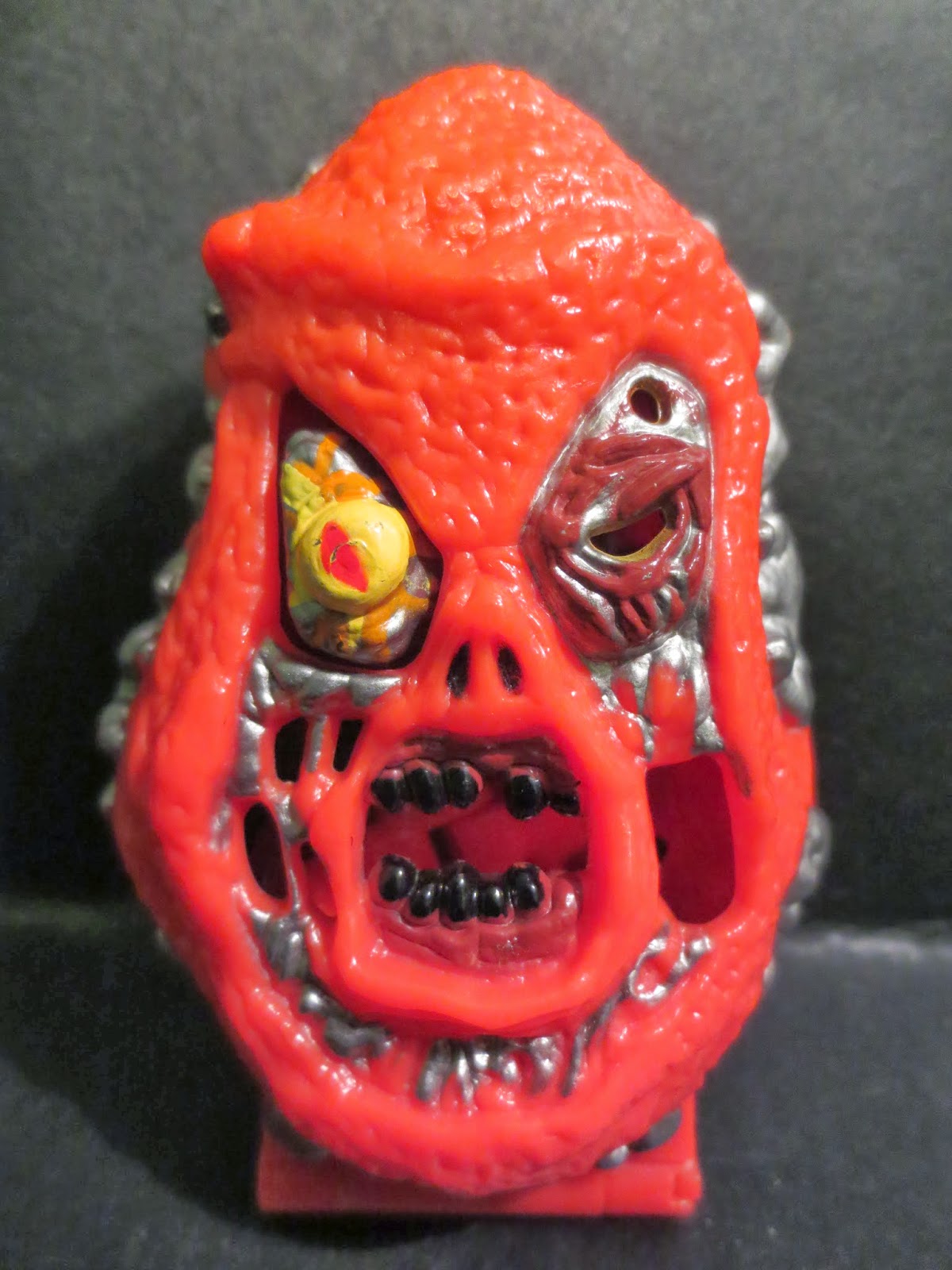 In 1992 Mattel began distributing Mighty Max in the United States. Created by the British toy company Bluebird Toys, Mighty Max was the companies attempt at marketing their extremely successful Polly Pocket concept of a microfigure line with fold-up playsets to boys. The toyline proved to be successful enough to last for around 3 three years but even with an animated series and video games appearing in 1993, the toyline somewhat faded into obscurity. It's influence, however, was seen the the microfigure/ playset boom of the mid 90's: Galoob's Micro Machines lines (including Star Wars), Teenage Mutant Ninja Turtles, Trendmasters' Godzilla and Independence Day lines, and plenty of other companies and toylines entered into the market that Mighty Max forged. Thanks to John over at The Clawful Punch my love for this toyline has been rekindled and I've went back and snagged a few sets that I had as a kid that got sold off or traded away at some point. I didn't sell everything, though, and today I'm looking at the first Mighty Max set I ever purchased: Mighty Max Challenges Lava Beast! Ready for some flaming fun? Then join me after the break... 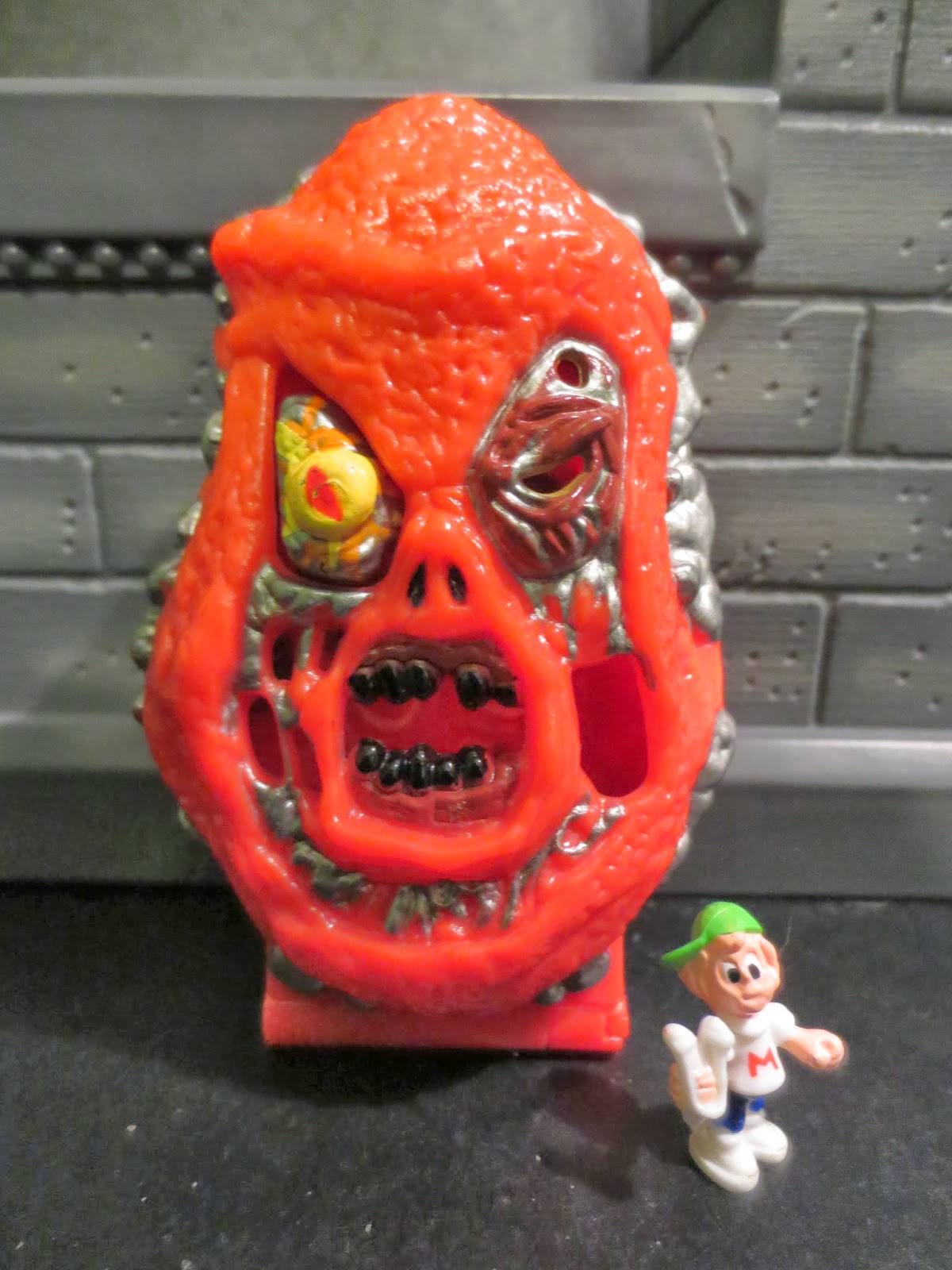 During the first year of the Mighty Max toyline there were three different sizes of sets: Doom Zones, Horror Heads, and the large Skull Mountain playset. Lava Beast falls into the Horror Heads scale, which were the smallest sets initially available. On the outside these are simply little plastic monster heads that opened via a hinge to reveal a playset interior. Part of the gimmick for Mighty Max was that his magical hat transported him to different worlds, thus enabling Bluebird to create a variety of different adventures for Max based on anything kids liked. On the outside the Lava Beast is a creepy looking magma guy with a smoldering eye, black teeth, and lots of globs of molten metal hanging from his face. Interestingly, the monster heads often did not look like any of the minifigures included in the set; this was one of those cases as no figure in this set looks like this guy. 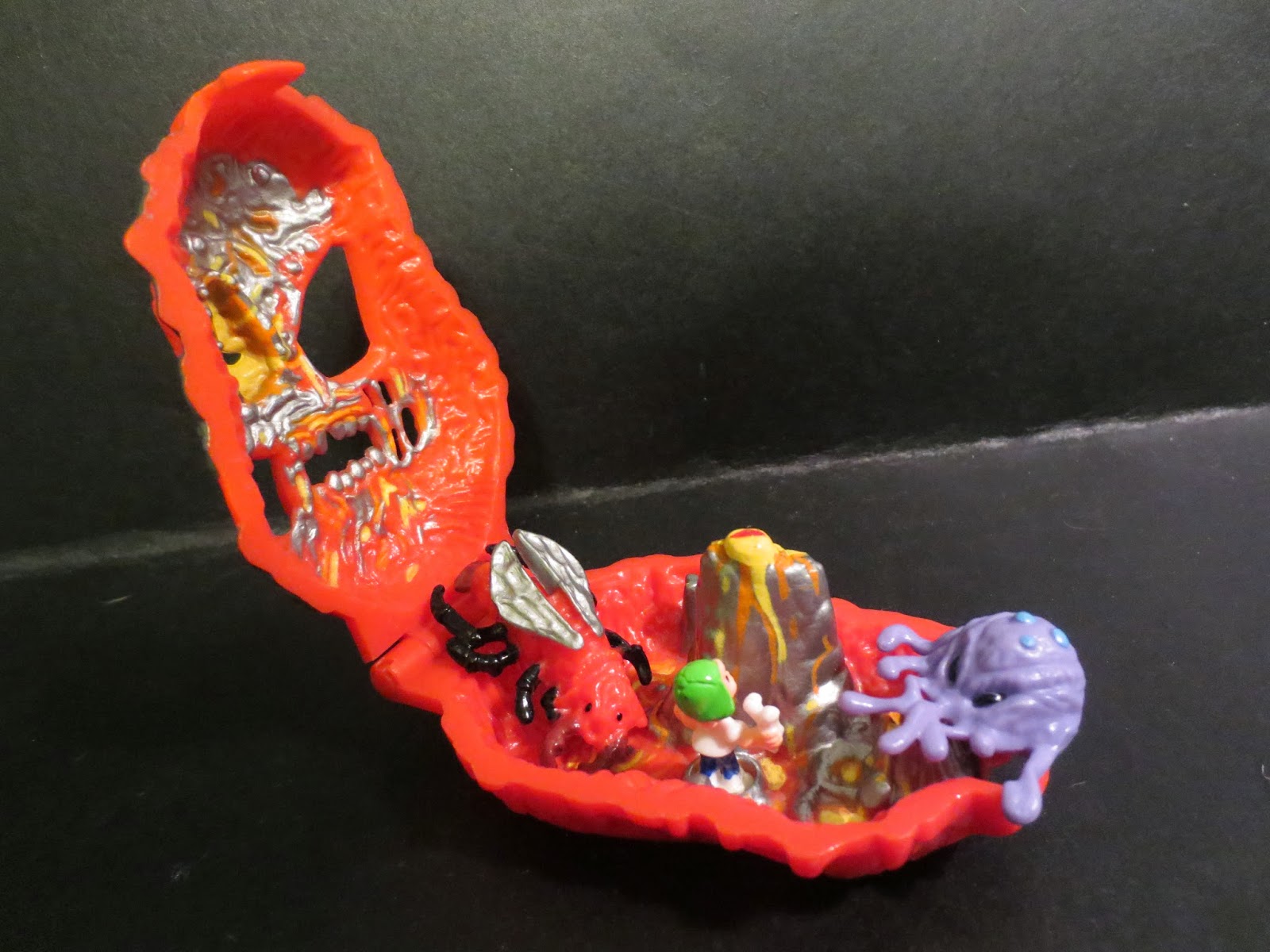 The set opens up to reveal what looks to be the interior of a volcano. There are some smaller volcano like formations that have molten hot magma pouring out from them and some various pieces of semi safe ground for Max to stand on. With this set you could either leave the opening "face" of the set up at a 90 degree angle or lay it flat to increase the play area. Some of the horror heads featured very abstract details, so there was no way to determine the "right way" to display them. 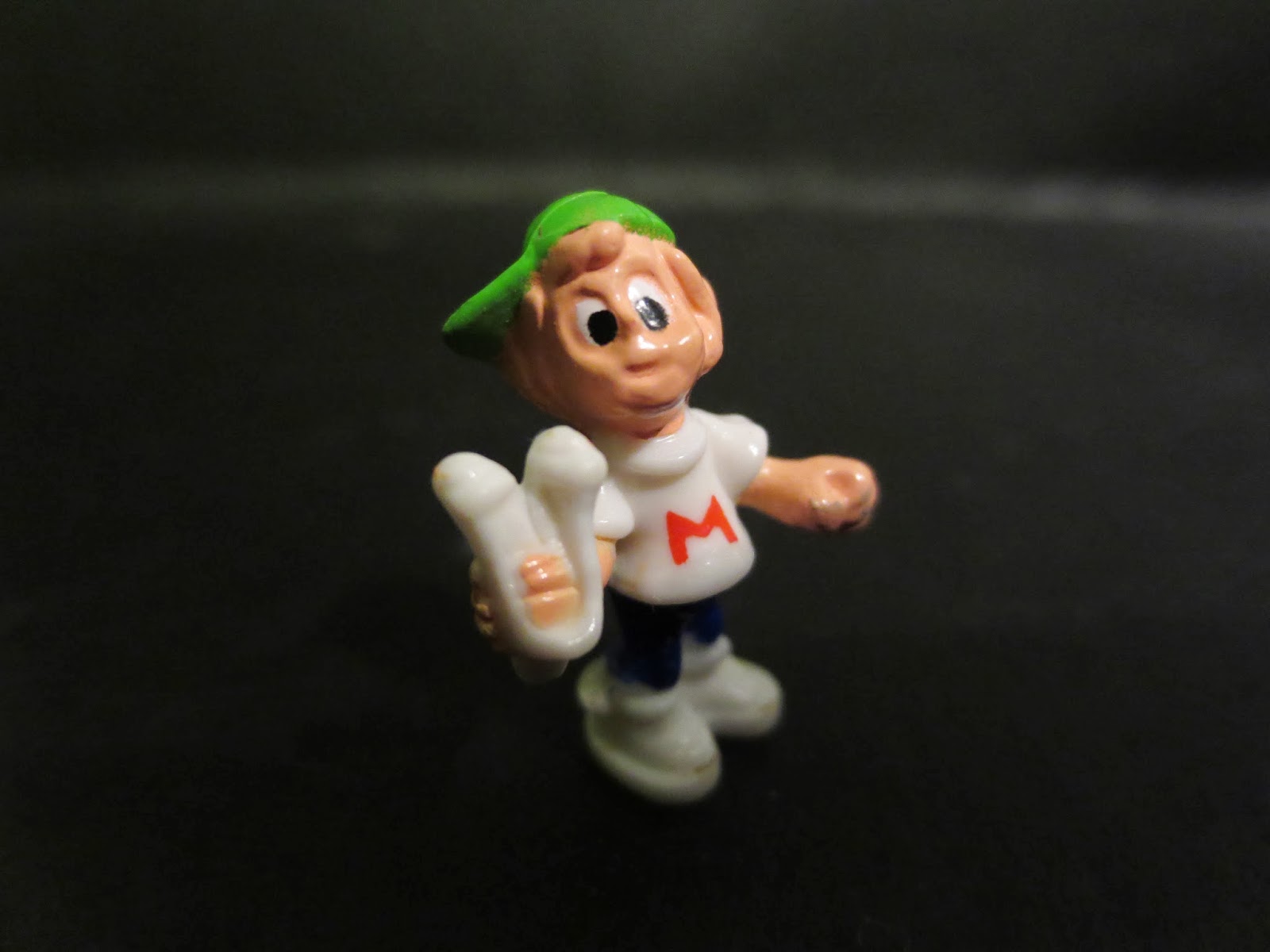 Every set came with Max. Mighty Max. From the back of the original packages:


Max's dad left him his old baseball cap. Trouble was, this was no ordinary baseball cap..."Gotta look the business" Max thought as he tweaked the cap's peak round to the side. "AAAARGH!" Suddenly, the world had gone weird and very unfriendly! The cap had changed colour! Something very strange was going on! He'd been caught in the Horror Zone. Stumbling from one terrifying adventure to another with only cryptic clues to help him escape...he was all alone. He was scared. But he was MIGHTY MAX, and he'd get back somehow! 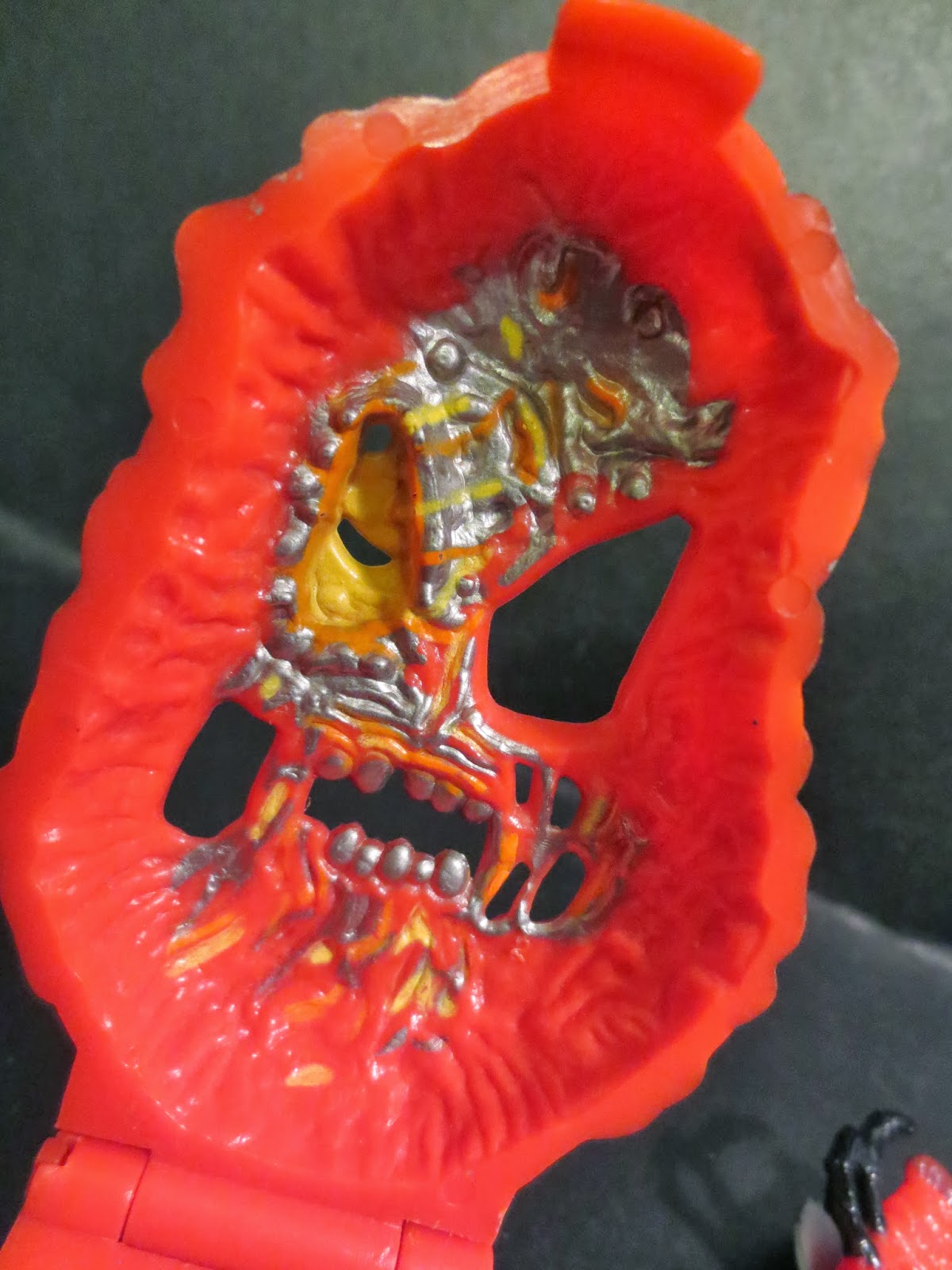 One of the things I've been trying to figure out lately is whether the Max figures were randomly inserted in the earliest sets. While later sets often had very set specific Max figures, the earliest sets had a few different molds that could also have different colored baseball caps. My Lava Beast set from childhood is the Max with a slingshot and a green hat. I'm pretty confident that Max having a slingshot (like Bart Simpson) was a key selling point in choosing this set as my first Mighty Max piece. Anyways, the figure is really tiny (around 1/2 an inch) and is a solid, non-articulated microfigure. The detail that jumps out at me the most on the earliest figures was always Max's eyes: they looked huge! 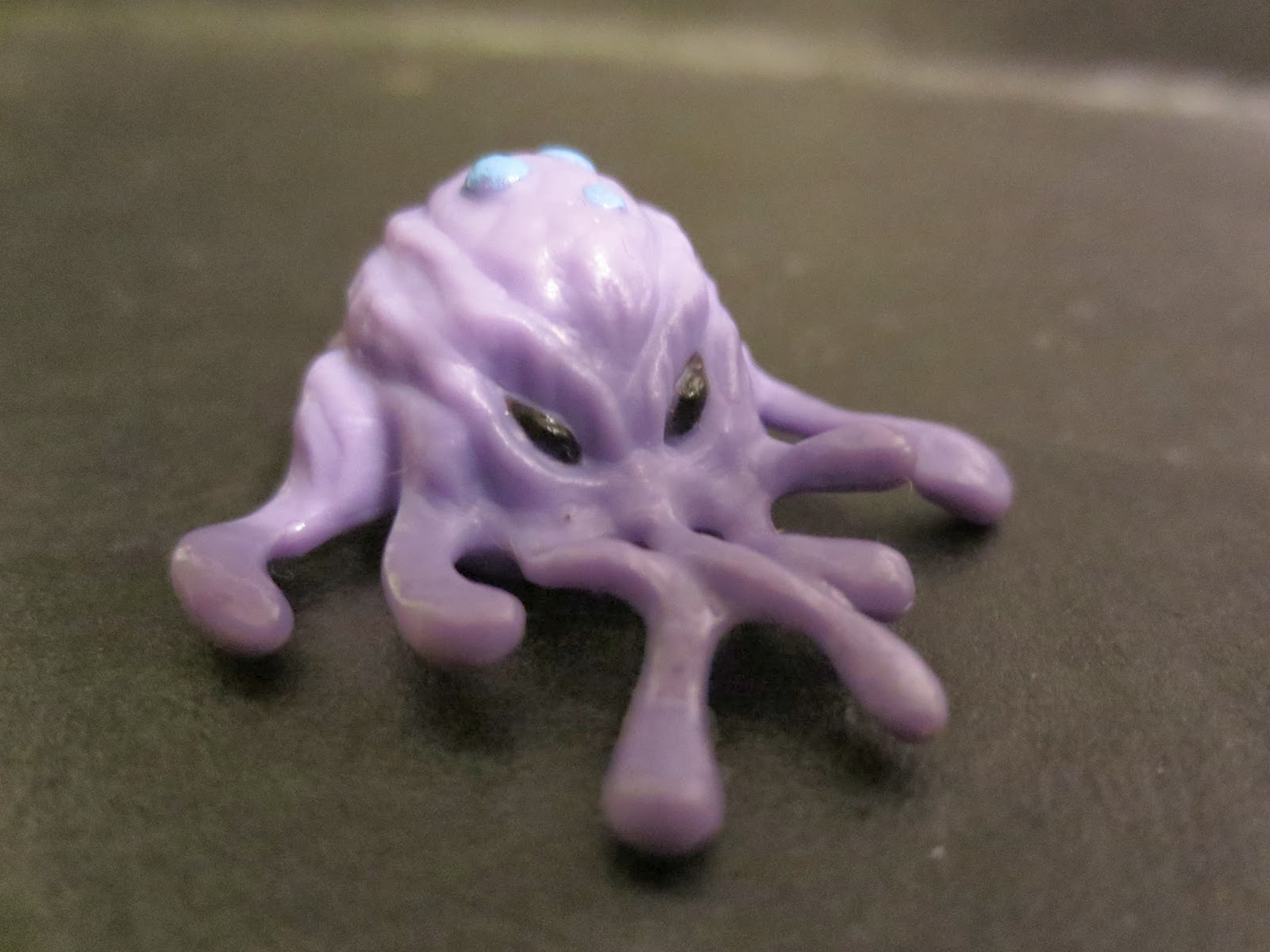 Surprisingly the Lava Beast referred to in the title is this guy. I always thought he looked like an Octorok from The Legend of Zelda. He's a weird looking guy that I always used as more of a random henchman type of monster. He's cool, but the first thing that comes to your mind when seeing him isn't "this guy should live in a volcano." 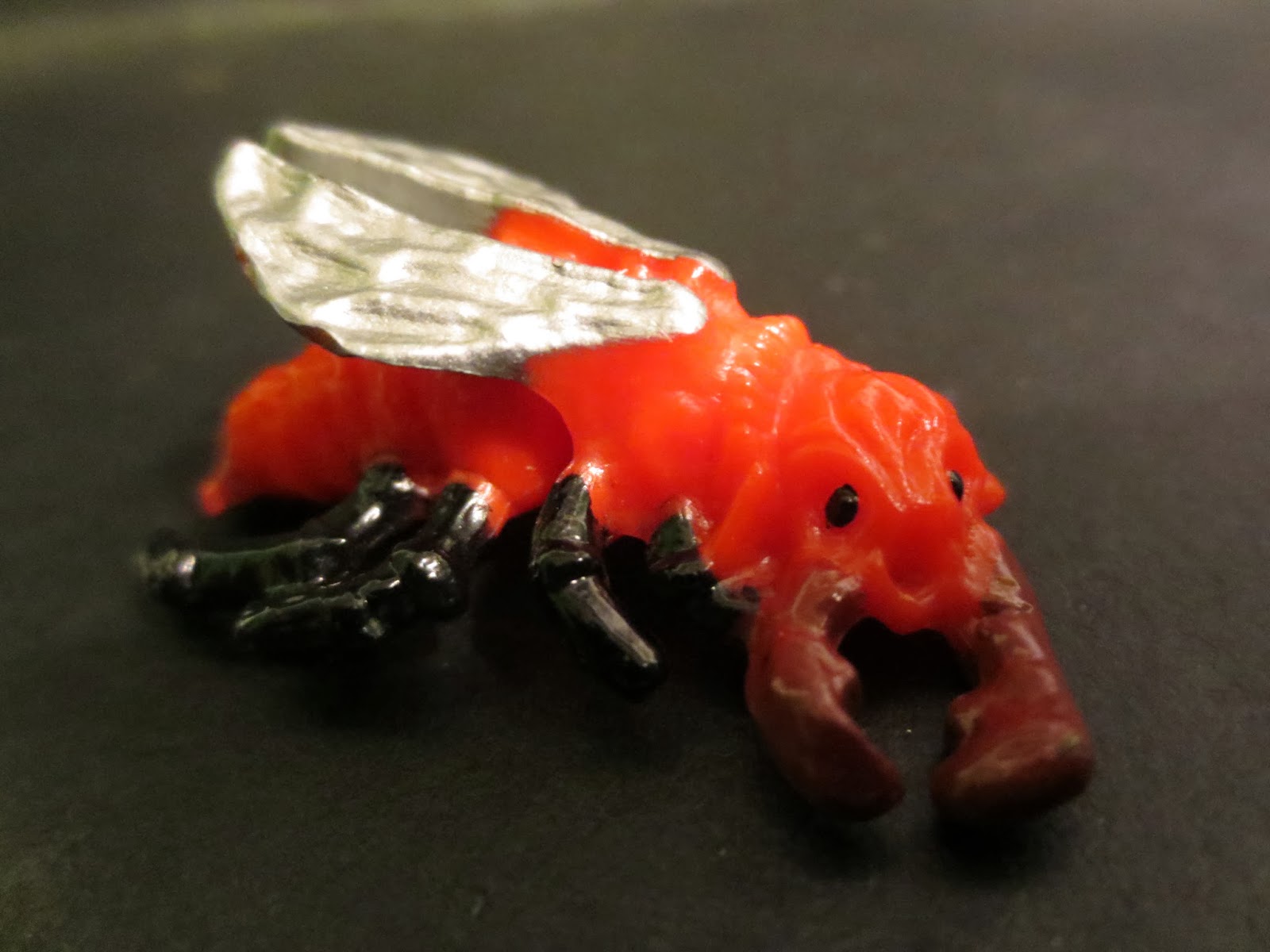 The Lava Beetle is actually a bit cooler. Not only does he have a lot of different paint applications on him but he also has a hinged abdomen so he can be posed a little. I like this guy a lot. He's fun and kind of weird too. The Mighty Max sets always reminded me of levels from videogames as a kid, so I'd always imagine that Max had to dodge these guys and use them as platforms to cross the lava by hopping on their backs. 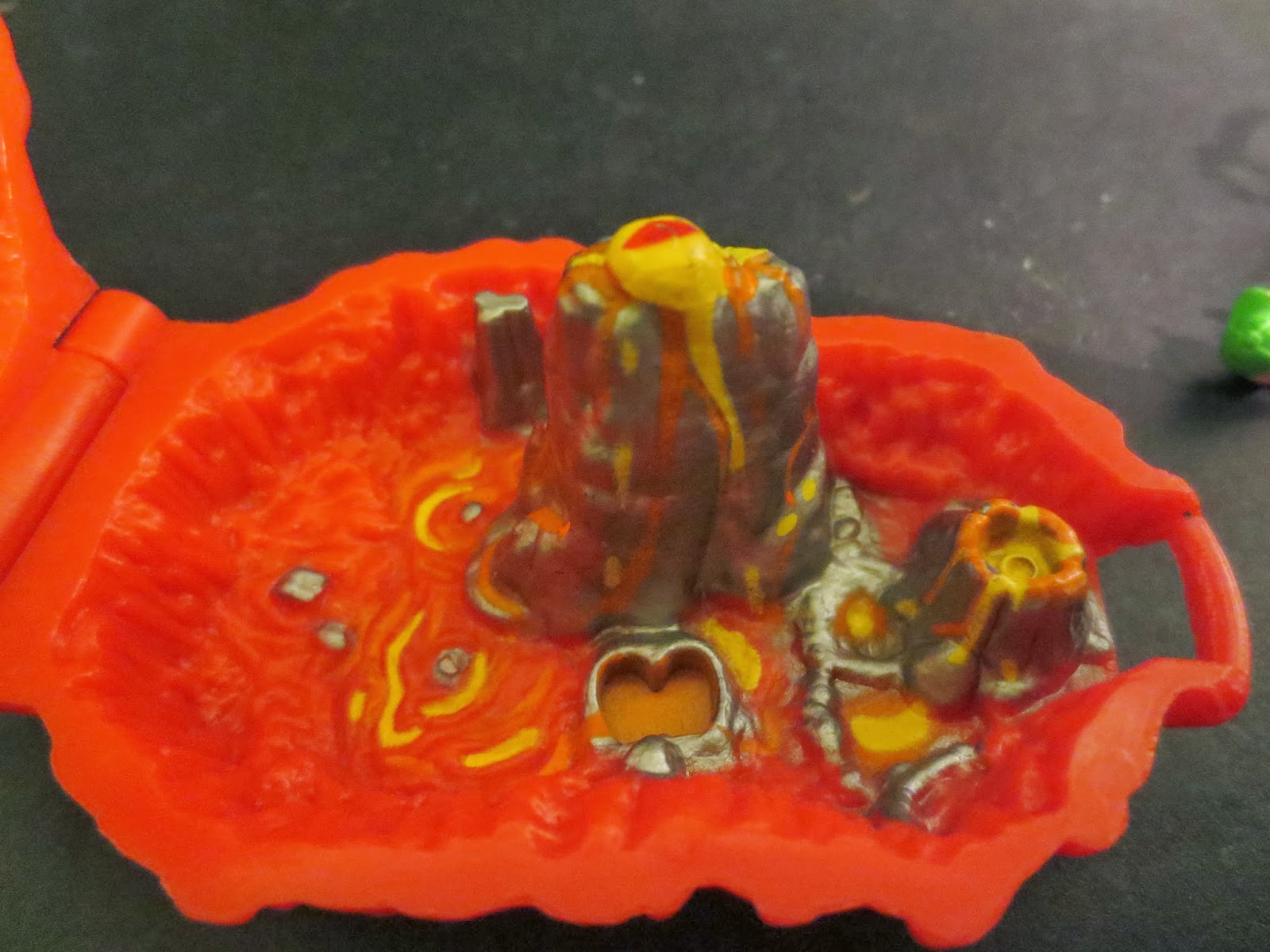 Most of the Horror Heads (at least the first series of them) didn't have a lot of interactive features. About the only thing I can point out here is that there is an indentation for Max to stand in. This serves to help keep him in place when you close the set. All of the included figures could fit in the set when closed: Max stood in his spot, the Lava Beast actually fit over the smaller crater near the edge of the set, and the beetle could lay on his back in the space over the lava pool. The way every figure could be safely stored inside the sets really was a nice feature; these were great toys to fit in your pocket or in your bookbag for recess play. I do remember stashing a set or two with me during grade school on certain days and I remember having a few classmates who did the same. The sets were durable, too, and could easily withstand being jostled around in a bookbag for a few hours a day. 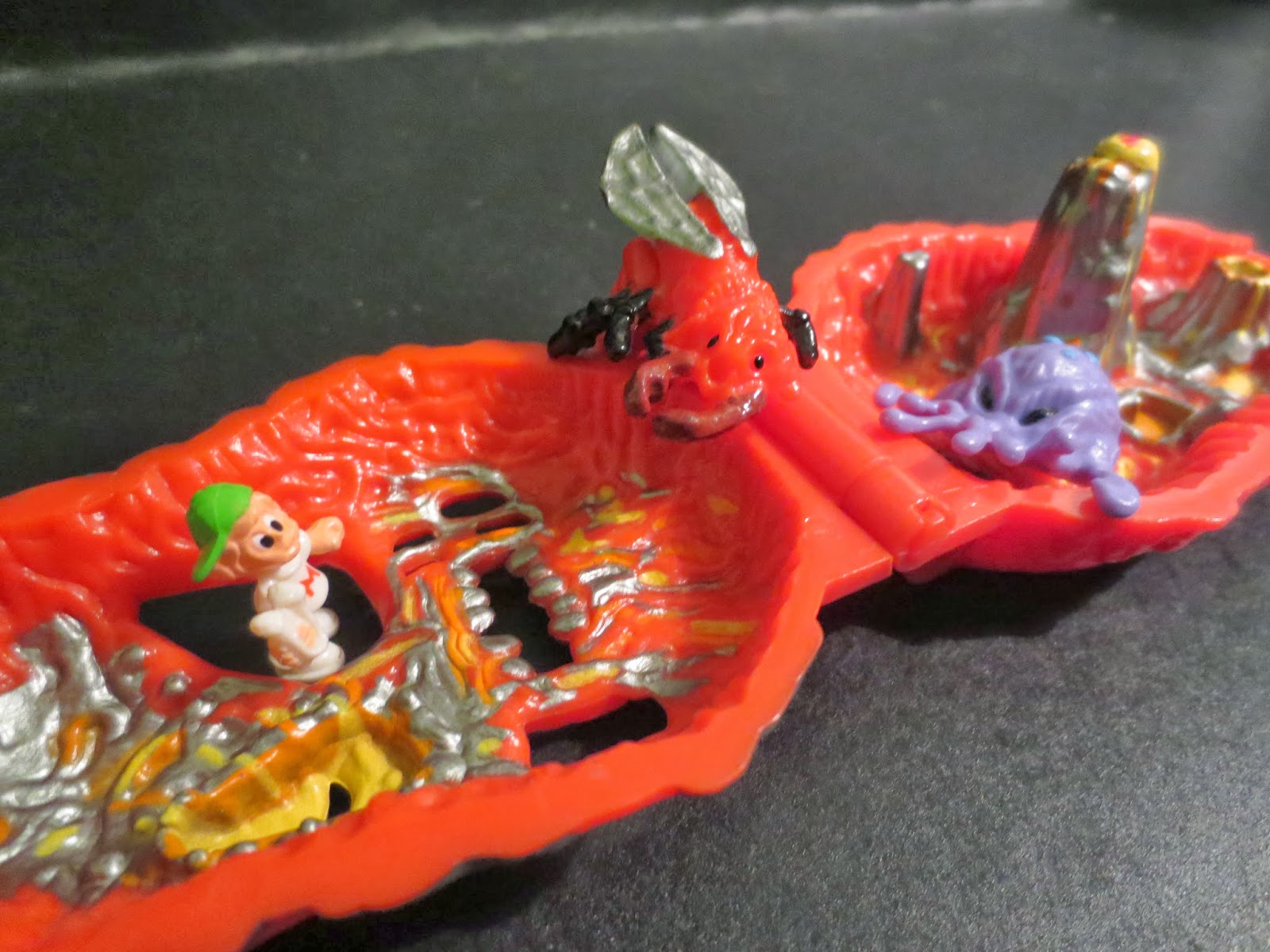 Whenever I try to rate action figures from my past, I try to rate them compared to how I remember feeling about them at the time. While the concept of Mighty Max really knocked my socks off as a kid, I remember thinking that this set wasn't as interesting as some of the others. Still, it had two great villain figures (some sets only had one larger creature or a creature and a small vehicle) that could easily wander over into other sets. Overall, I think I'd give this set a Good and a 1/2. It's not one I'd hold up as a grand Mighty Max design, but it's a nice example of the what was offered in the first round of Horror Heads. Considering the state of the toy market these days with the rising cost of action figures, I'd love to see Mattel jump back into this property and see how it works with kids today. With one purchase you were getting a playset, a hero, and some villains. While some of us certainly wanted more sets, one set could still give you a nice play pattern to keep you occupied. I'm going to be looking at more Mighty Max sets over the coming months, as I've decided this will be the vintage line I focus on this year in my collecting, and I'm sure that John will be showing off new acquisitions over at The Clawful Punch will do so as well. Are their other Mighty Max fans out there? Can we work to bring back Mighty Max? I don't know, but I'm darn well going to try. I owe it to my 9 year old self.