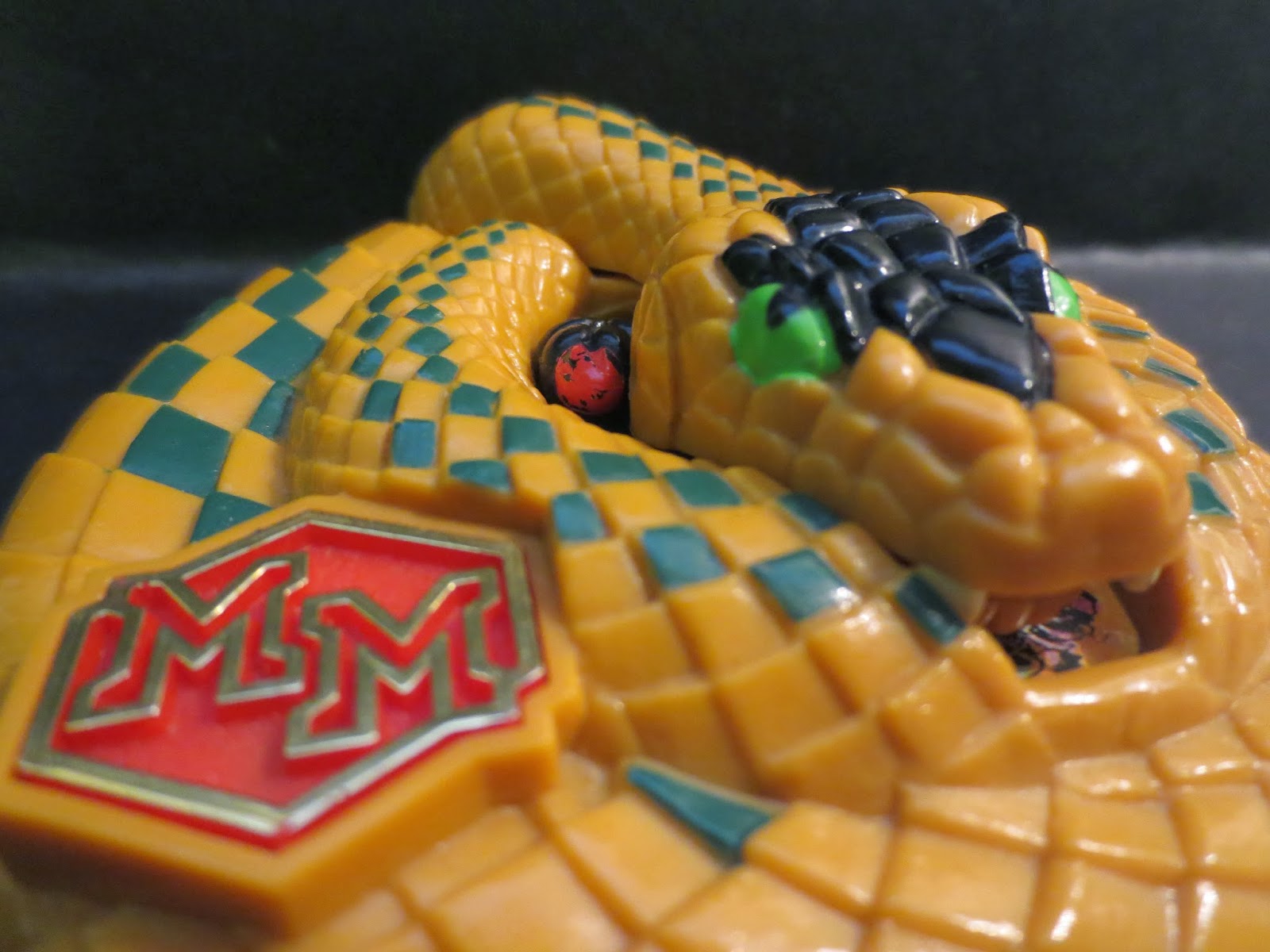 Welcome back to what's sure to be some plentiful Mighty Max coverage here at ThEpic Review. Every year I try to pick one or two vintage lines to collect and this year I'm turning my attention to Mighty Max, aline released in 1992 by Bluebird Toys and distributed in the US by Mattel. I'm going to try and have a Mighty Max Monday feature every week for the near future just because I want to and Mighty Max is amazingly awesome. Today I'll be looking at one of the series one Doom Zones from 1992: Mighty Max Conquers the Palace of Poison! This is a set that I had as a kid but somewhere along the way I sold it. I bought this one online a few years ago to fill the gap that was left in both my collection and my heart. Ready for a tour of a creepy Egyptian tomb filled with enough snakes and mummies to rival even the Well of Souls? Then join me after the break...

In 1992 Mighty Max sets were available in three different sizes; there was the giant Skull Mountain playset, the smaller Horror Heads, and the medium sized Doom Zones. The Palace of Poison is one of those Doom Zones. I think the Doom Zones are my favorite Mighty Max  playsets because they retain the compact charm of their smaller brethren but come with more figures and play features. The Palace of Poison wasn't my first Doom Zone (it was either my second or third) but it's definitely one of the more unique early sets. First, rather than being just a monster head it actually looks like a coiled up snake. The scales sculpted on the body and the nice paint details help to make this a fairly neat handheld toy. Also, there's a red and gold "MM" logo on top of the set. That was something neat which the smaller sets didn't have. 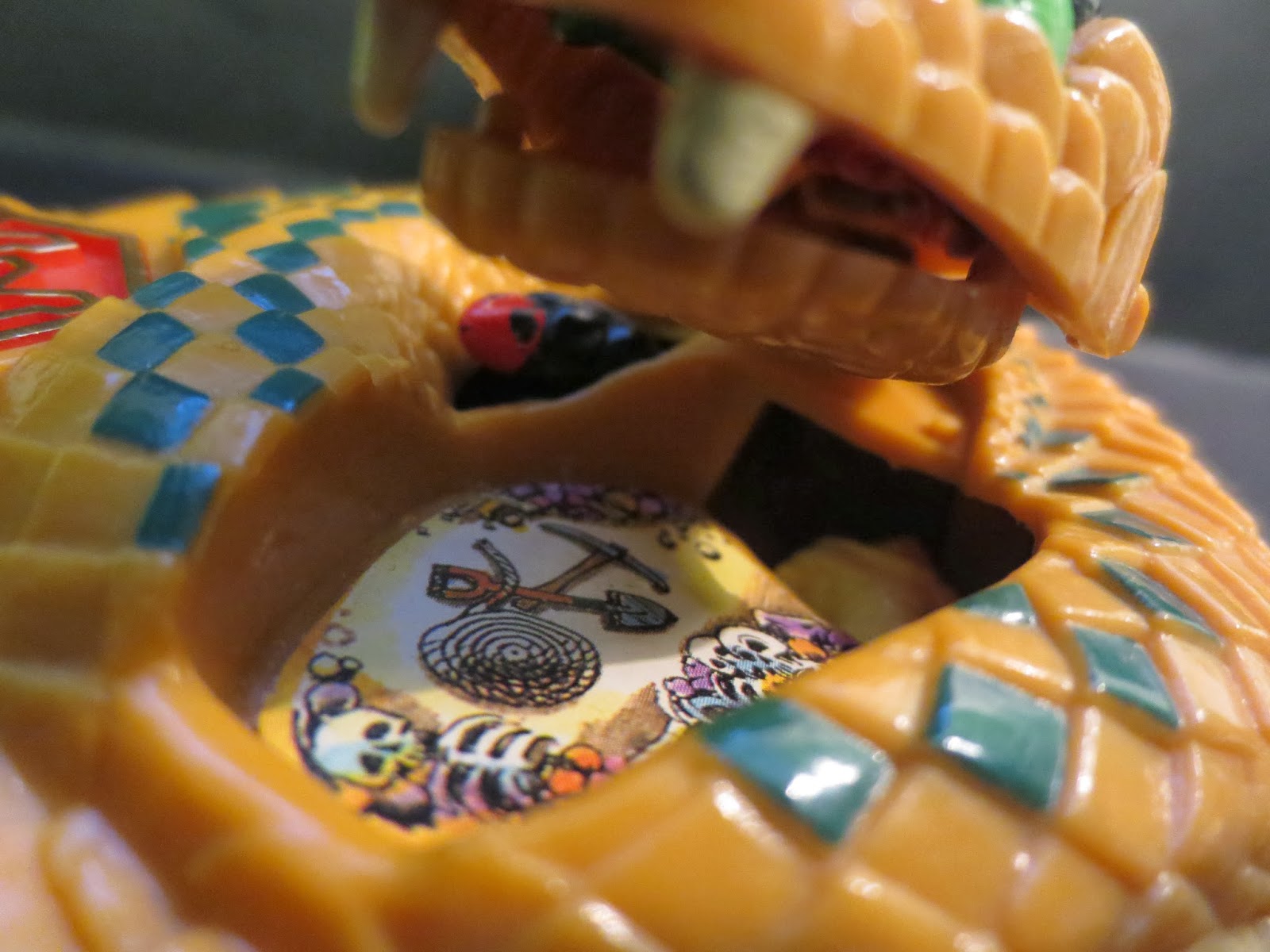 Another cool feature of this set is that when you lift up the snake's head you reveal what looks like a dig site. It's mostly just a detailed sticker and a chute down into a part of the set, but I still find it rather interesting. It's supposed to represent Max digging his way into or out of the Palace of Poison. Oh, and see that red and black piece that looks like the snake's rattler? That's actually part of a microfigure resting inside the set. I always found it to be very cool when the microfigures in some way contributed to the appearance of the playset exterior. 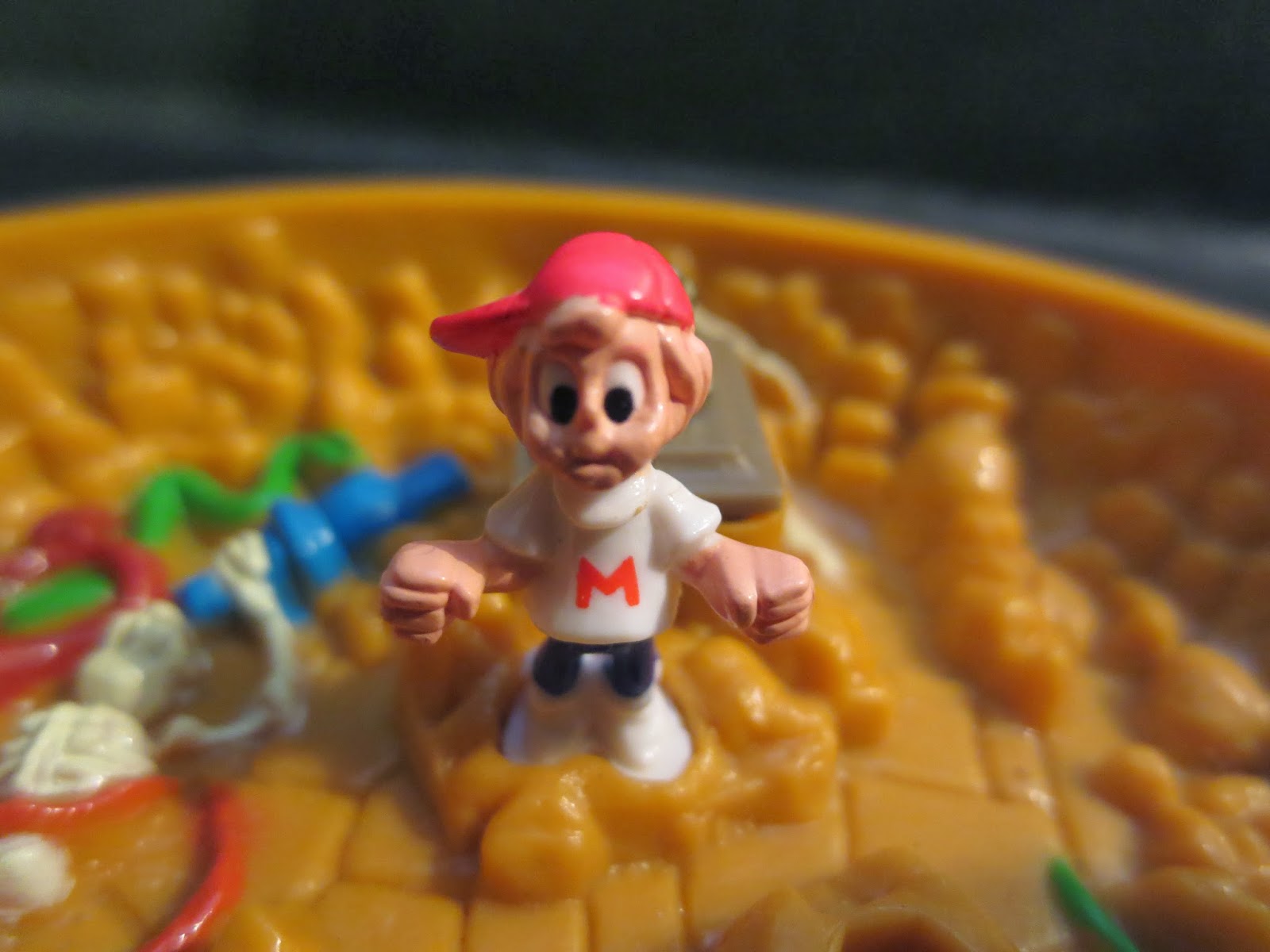 When it comes to the minifigures, there's always a Max in each set. From everything I've researched the Max figures in most sets were random. Sometime I'll probably cover a variety of the different Max figures offered, but here I simply have a Max in a bright pink hat who looks like he's ready to punch some stuff. Punch-a-riffic! 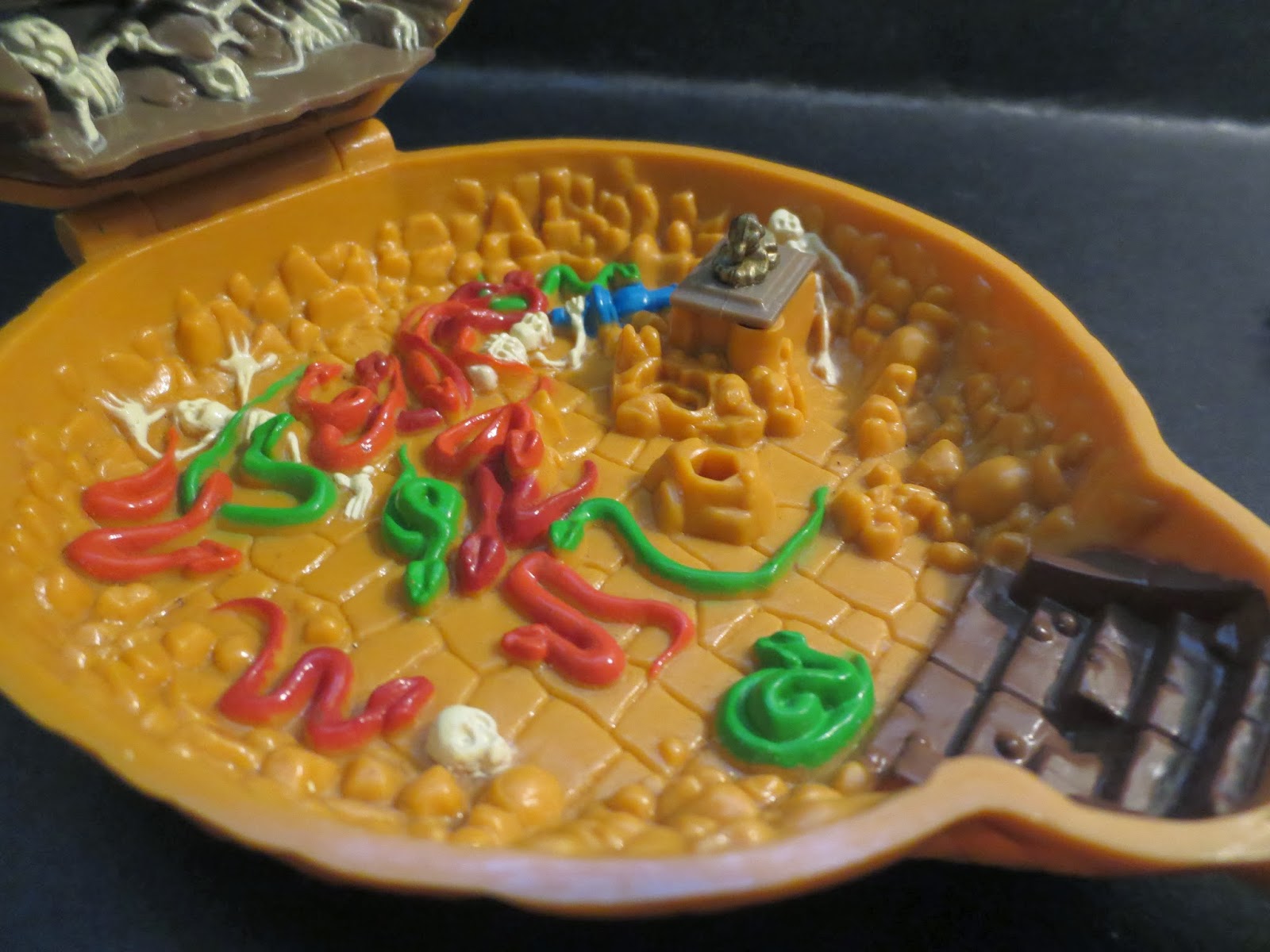 Here's the main room of the Palace of Poison: It's a rocky affair littered with skulls, old jars, and snakes. Lots of snakes. Snakes are everywhere! The Mighty Max sets always had plenty of cool, creepy details to get your imagination going, and the sight of red, green, and brown snakes crawling all over old skeletons definitely brings to mind some creepy images. It always makes me think of the Well of Souls from Raiders of the Lost Ark. 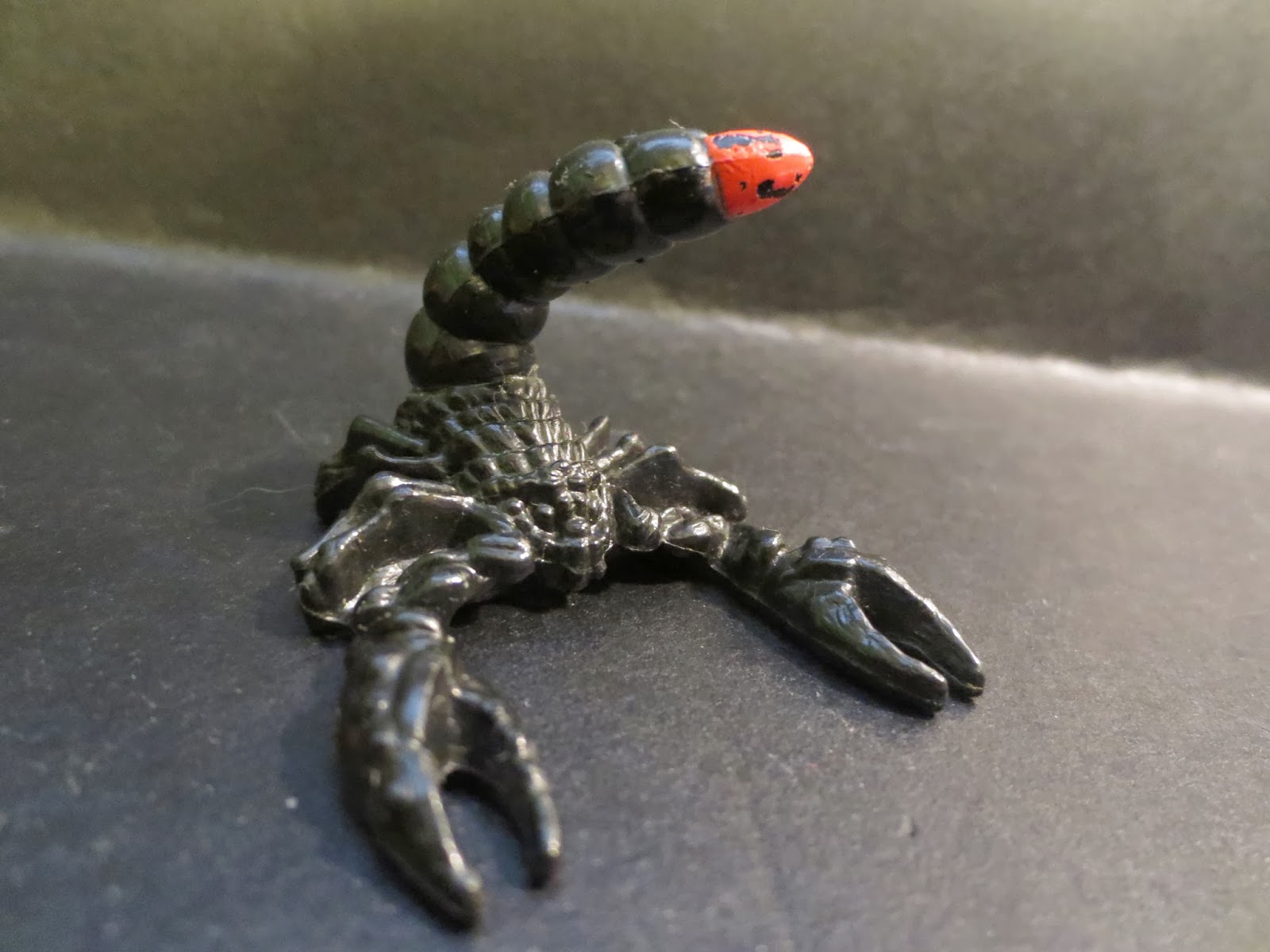 Besides just snakes, there is also a giant scorpion. The stinger on the tip of his tail was the rattler you saw on the snake that makes up the playset case. He's a simple hard plastic figure, but he does have some red paint on his stinger and some nice sculpting. He's also a lot bigger than Max. 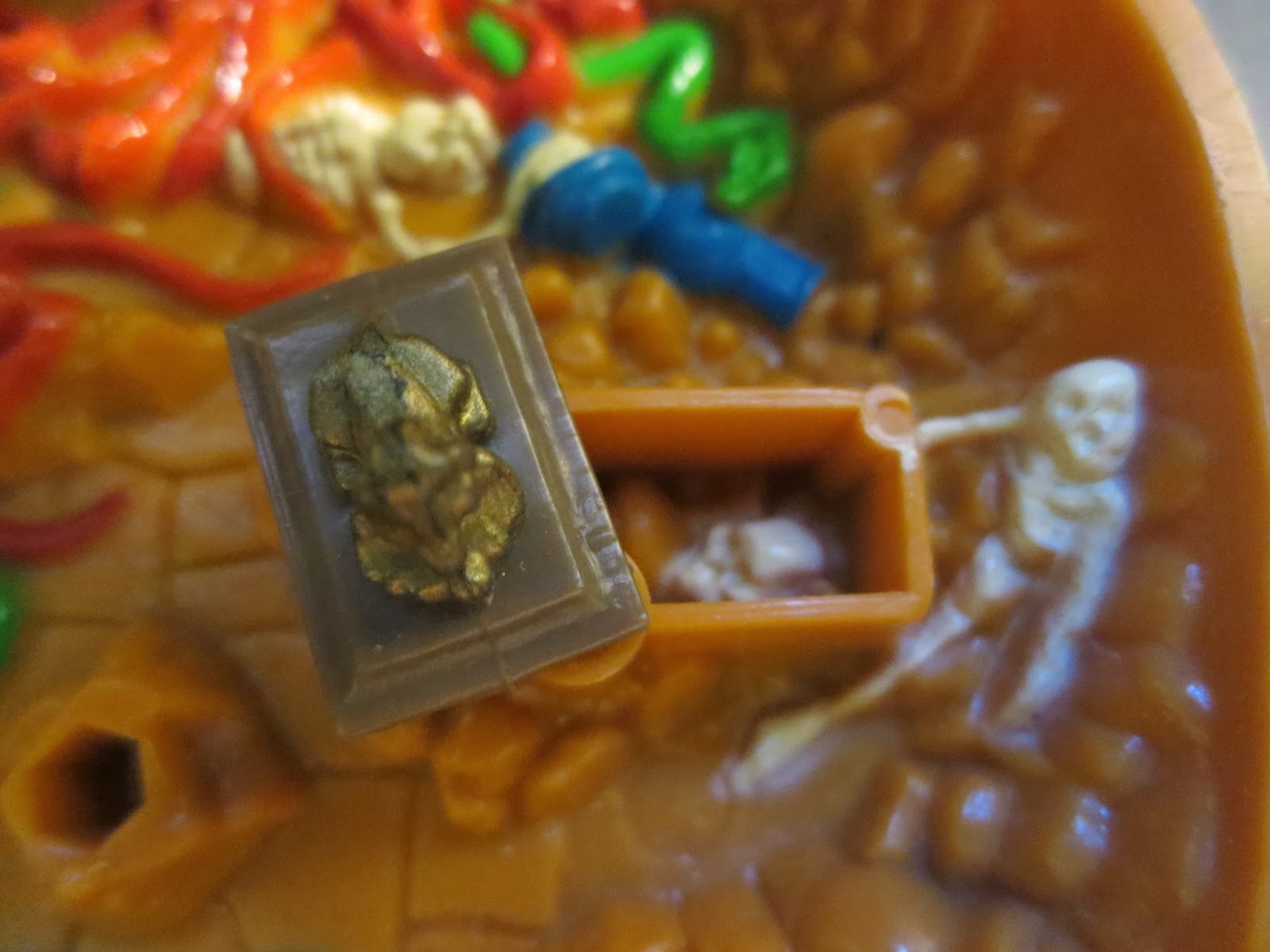 In the base of the set is a space for Max to stand and a rock with a hole that the scorpion can be placed over. This allows the playset to fold up with all of the figures neatly in place, something that is a really cool design feature of all of the Mighty Max sets. There's also a chest that swivels open to reveal a skull and some old pottery. 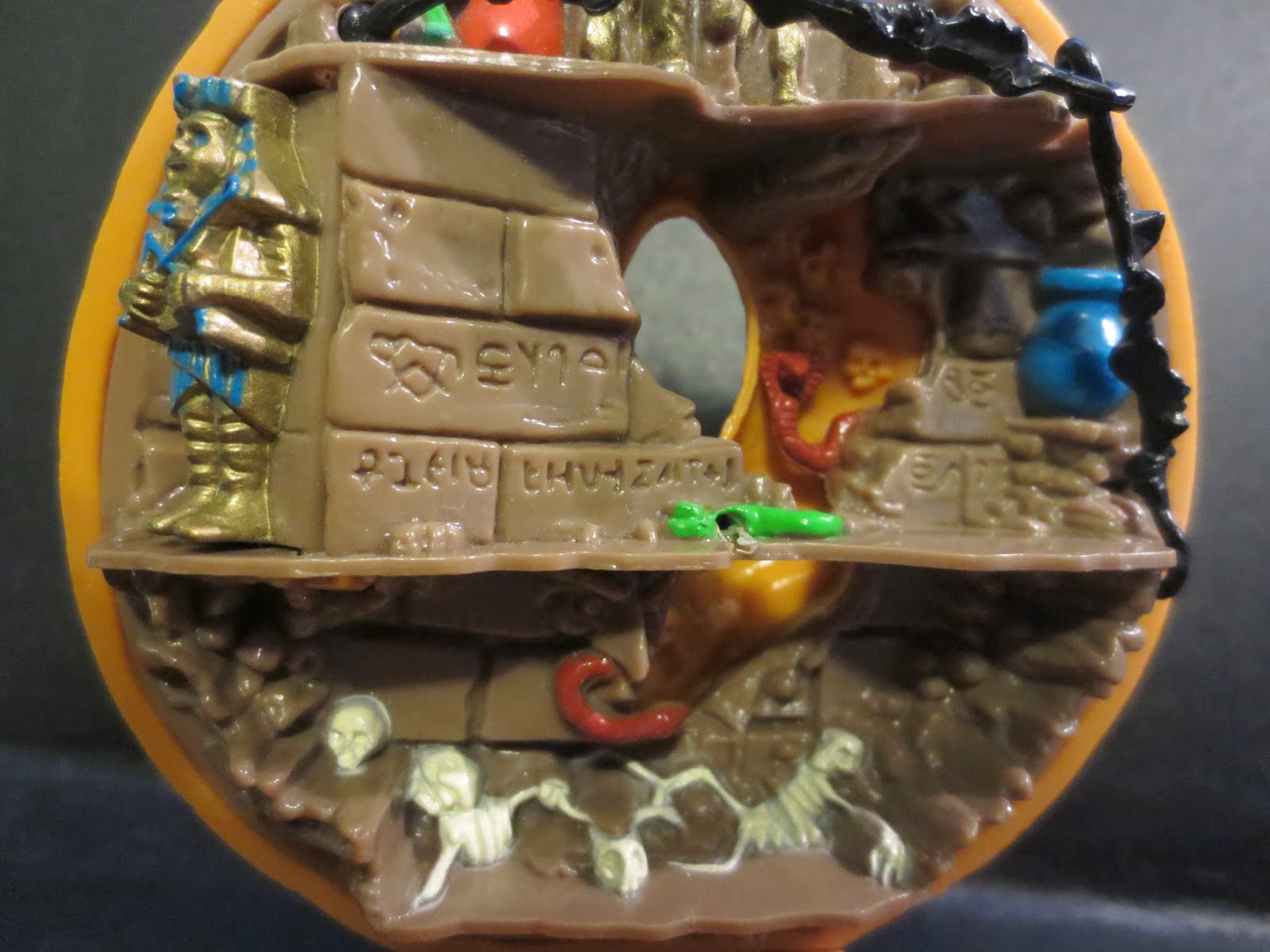 The main wall of the set shows three stories of the tomb's interior. The bottom floor has snakes crawling out of walls and skeletons littered all over the ground. The middle floor looks like it's seen some wear as the bricks (many containing some impressive hieroglyphics)  are crumbled and broken. There's also more pottery, more snakes, and a creepy sarcophagus up against the wall. Wait...that Sarcophagus actually opens.... 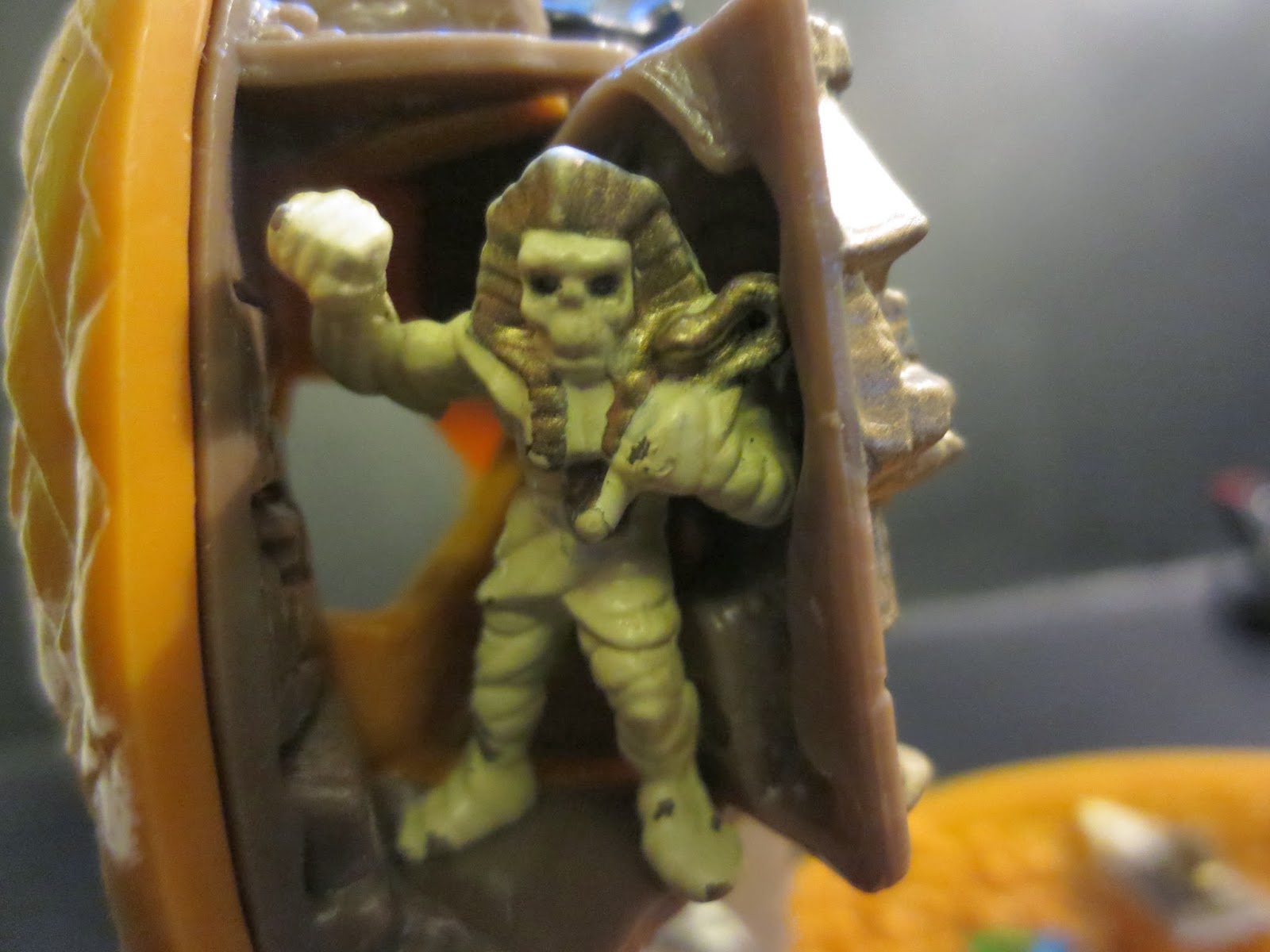 And out pops the Mummy King! He's a pretty traditional looking mummy although he does have some gold paint on his staff and pharaoh's headdress. He's also got his right fist pack like he's ready to punch! Punch-tastic! 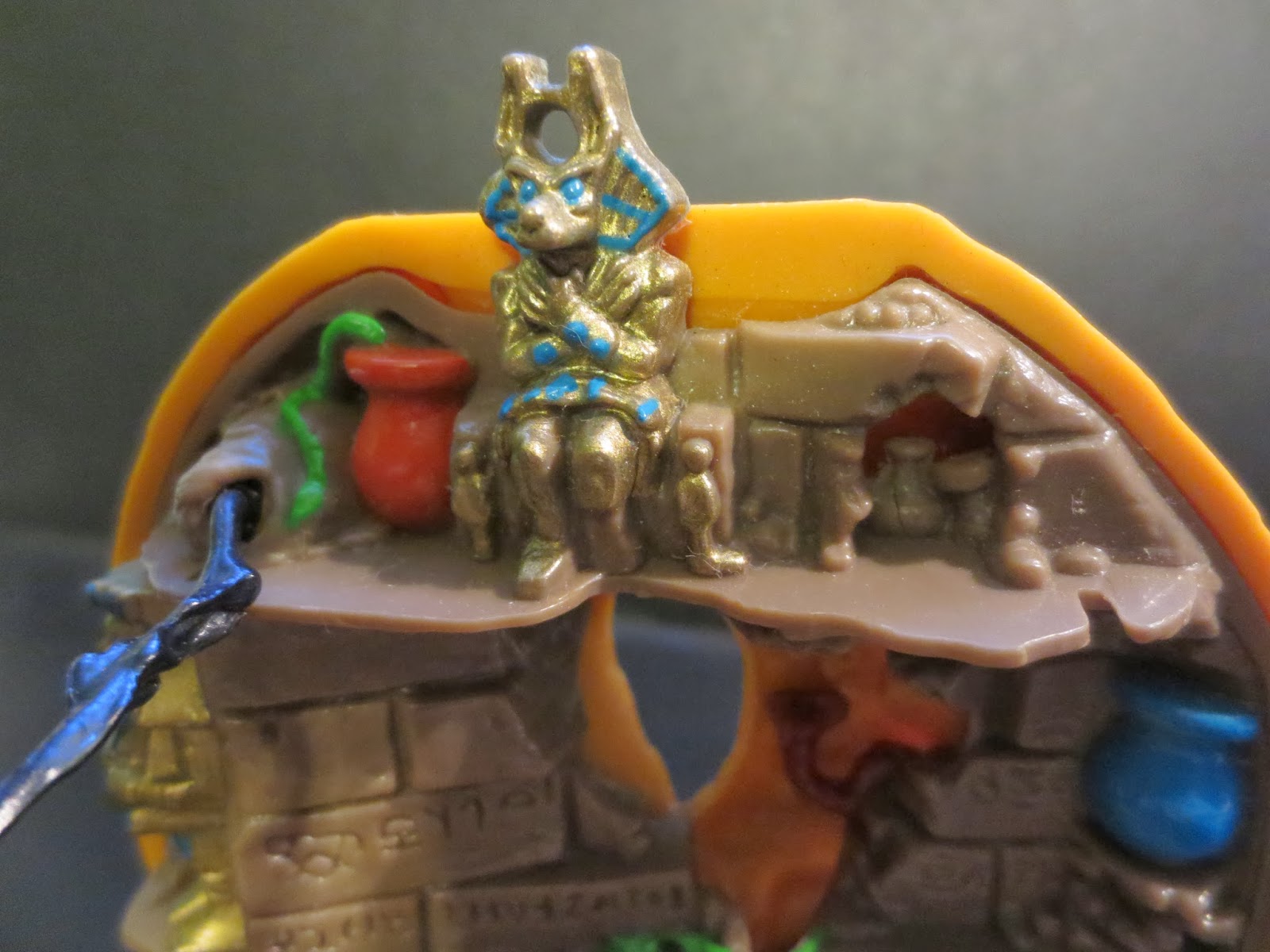 The third floor has a statue, more cool details (including canopic jars), and a rope. The rope is a two piece plastic rope that can fold against the wall for storage or be linked across the playset to the tower on the other side. 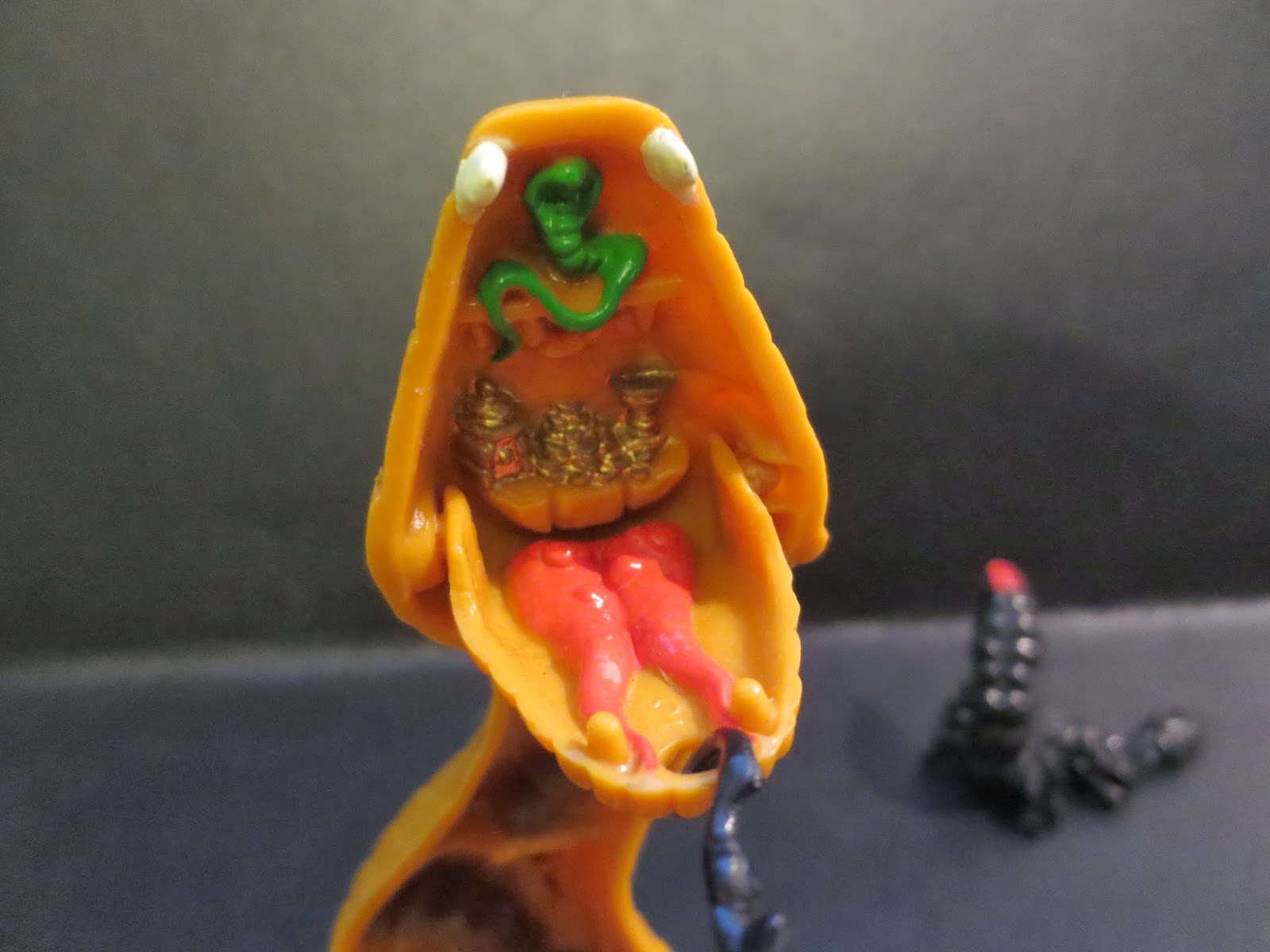 I always liked that while there was a main wall to the playset, the snake's head folded up into a tower of sorts. Lots of stairs leading up to the top (filled with lots of snakes and a near little torch), but it seems that you can't reach the treasure that sits up in the top room unless you use the rope bridge. There's a little chest up there, a stack of coins, and what looks like one of the false grails from The Last Crusade. Oh, and it's all guarded by a cobra. 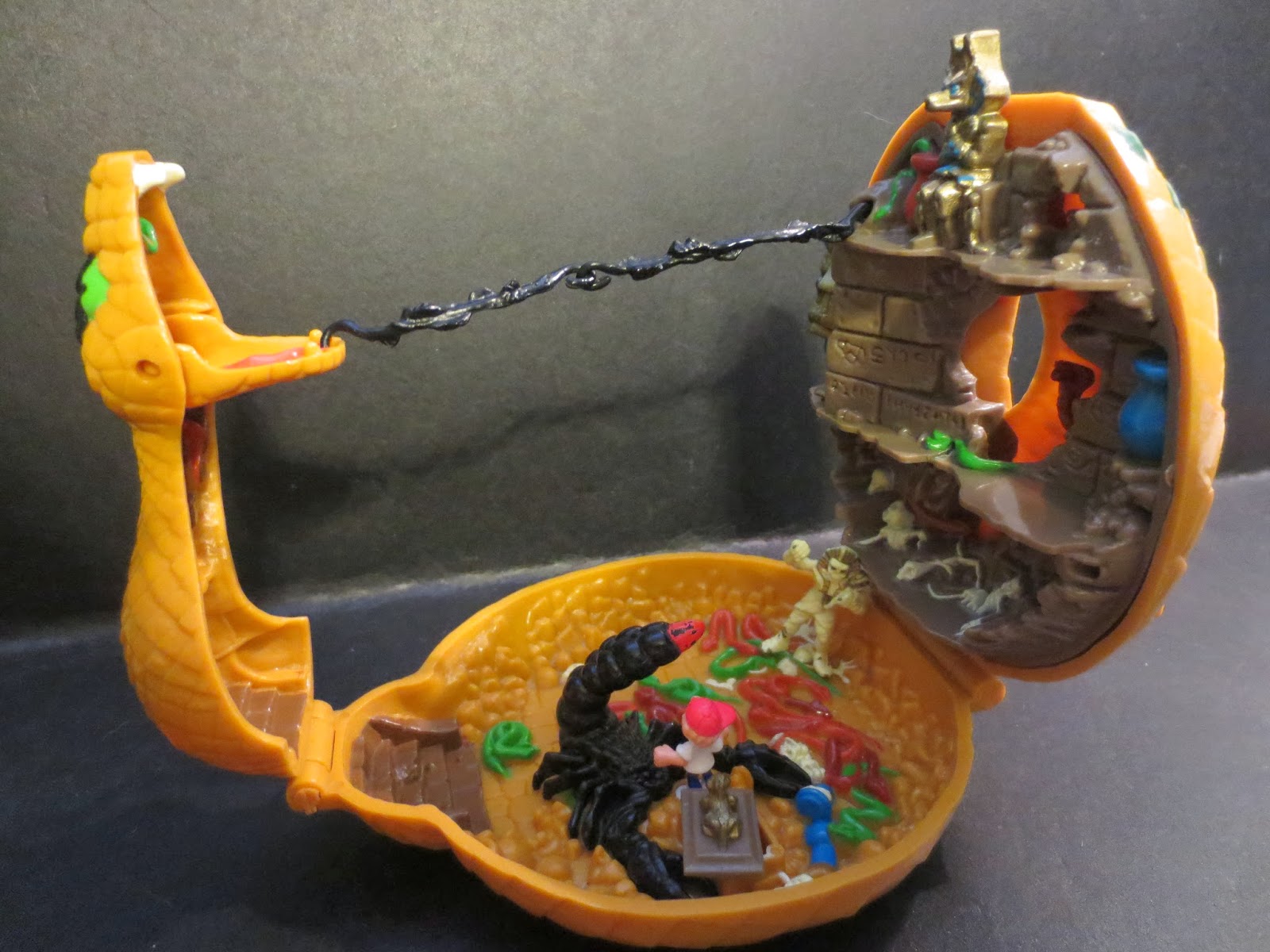 I would say that the Palace of Poison falls into my top tier of Mighty Max Doom Zones (well, at least of the ones I owned as a kid). It has a great theme with some nods to a classic movie, some fun features, and a unique design for the early sets in that it has two verticle play areas and what seems like a clear "goal" for the set (Max breaking into the tomb to raid the treasure room hidden high above). There's some fun, imaginative sculpting here that really appeals to me, even though all the snakes creep me out big time. Nasty. Overall, using the magic of the action figure time machine, I'd give this guy an Epic. As a kid this set completely floored me and I think it's easily one of the greats from the entire series. Plus, it makes you look like you're carrying a snake in your hand.

I've looked at one other set for Micro Monday so far: Mighty Max Challenges Lava Beast.  Expect many more every Monday. If you've got another set you would like me to review (and if I have it) leave a comment or drop me an email at thepicreview at gmail dot com.