Netflix for the Poor Kids: The Lair of the White Worm 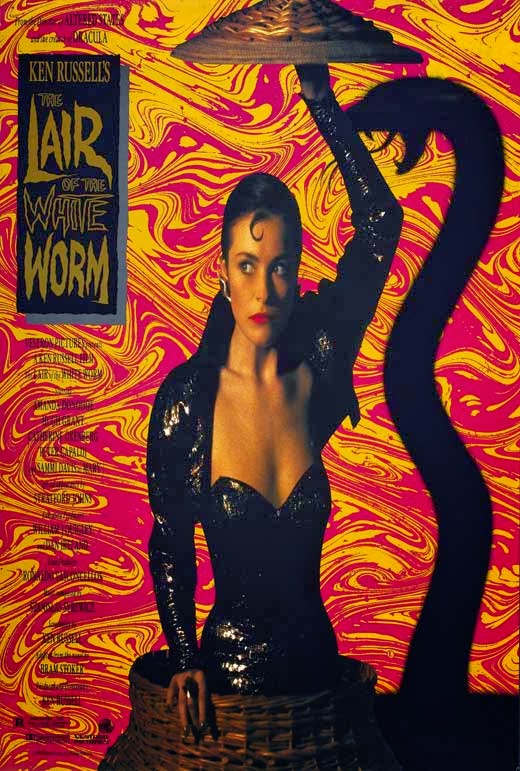 Last weekend I was pretty sick. Turns out I probably had the flu. I was feeling awful; chills, sore throat, and a fever of 102 degrees. In the midst of all of this I knew that I just wanted to lay back and watch a crazy horror movie on Netflix, so I flipped through until I stumbled upon this little gem: The Lair of the White Worm. The Lair of the White Worm is a 1988 British horror film directed by Ken Russell (Tommy, Altered States) loosely adapted from Bram Stoker's 1911 novel that revolves around an archaeologist excavating the site of an old convent that seems to have been built atop of a temple dedicated to the worship of some ancient snake deity. Set in the quiet countryside of Derbyshire, England, the film tells a tale of ancient pagan cult thought long dead returning to cause havoc in the lives of the locals. Filled with trippy visions, creepy old caverns, and seductive snake women,  The Lair of the White Worm is both crazy and clever enough to remind me of some of the wildest Doctor Who episodes. It also stars Peter Capaldi, the current 12th Doctor, and Hugh Grant, who played the Doctor briefly in the Red Nose Day parody special Doctor Who and the Curse of the Fatal Death. With its tale of a long dormant ancient pagan cult terrorizing a sleepy British town, the movie does feel like an amalgam of Doctor Who, The Wicker Man, and an H.P. Lovecraft tale. If you're looking for your daily dose of bizarre hallucinations, naked blue snake women, and Hugh Grant, The Lair of the White Worm might just suit you. More after the break...

On the property of an old bed and breakfast in the Derbyshire countryside, Scottish archaeology student Angus Flint (Peter Capaldi) is excavating the ruins of an old convent that was built atop even more ancient pagan ruins. During his work, he finds a giant serpent like skull that completely baffles him. Taking a break from his work, Angus takes the night off to venture into town with the sisters who are hosting him at the bed and breakfast, Eve and Mary (Catherine Oxenberg and Sammi Davis), to attend a party thrown by local aristocrat Lord James d'Ampton ( Hugh Grant). Since d'Ampton's distant relative is purported to have slain a giant "wyrm" in the nearby cavern system, Lord James is quite interested in the skull that Angus has found. Except that the skull soon disappears, Eve starts having terrifying visions of the nuns of the ancient convent being destroyed by snakes, and a belonging of the the sisters' parents, who have been missing for a year, turns up in the nearby caverns. And all this weirdness seems to tie into the strangely enchanting Lady Sylvia Marsh (Amanda Donahue) who resides in a nearby manor called Temple House. Is there more of a connection between the past and present than anyone expects?

This movie has a tone that waivers a bit, but I think it works. Lair of the White Worm is a really strange film, but it's definitely not a schlocky film. It's quite well put together and nicely layers a few perplexing mysteries during its first act. There are no weaknesses in the quite likeable cast, but the movie is really driven by the seductive eccentricity of Donahue's Lady Slyvia Marsh. While Lady Marsh exhibits incredibly odd behavior she also manages to to be incredibly captivating, stealing every scene she's in. She's perhaps the best representative of the tone of this film: captivating, unusual, and somewhat tongue in cheek, while still menacing.

While the film takes place in the remote locales one might expect to find in the English countryside such as isolated homes, empty fields, and ancient caverns, the encounters with the remnants of an ancient cult are fast and frantic. The dreams and visions experienced by a few of the characters are terrifying and filmed with a fever dream like quality. They're definitely going to make an imprint in your mind, perhaps even more so than the film's climax that is a smorgasbord of great, old school creature effects. This isn't a terribly deep film with unique ideas, but it's better than your standard cheese fest. It's a loving, (albeit more sinister), tribute to the creature films of the 1960s. You'll see ancient temples, giant worms, snake women, people being charmed by music like a cobra, and two Doctors (more like a Doctor and a half) working together to save Derbyshire from a gargantuan white worm. I can think of worse ways to spend two hours, can't you?