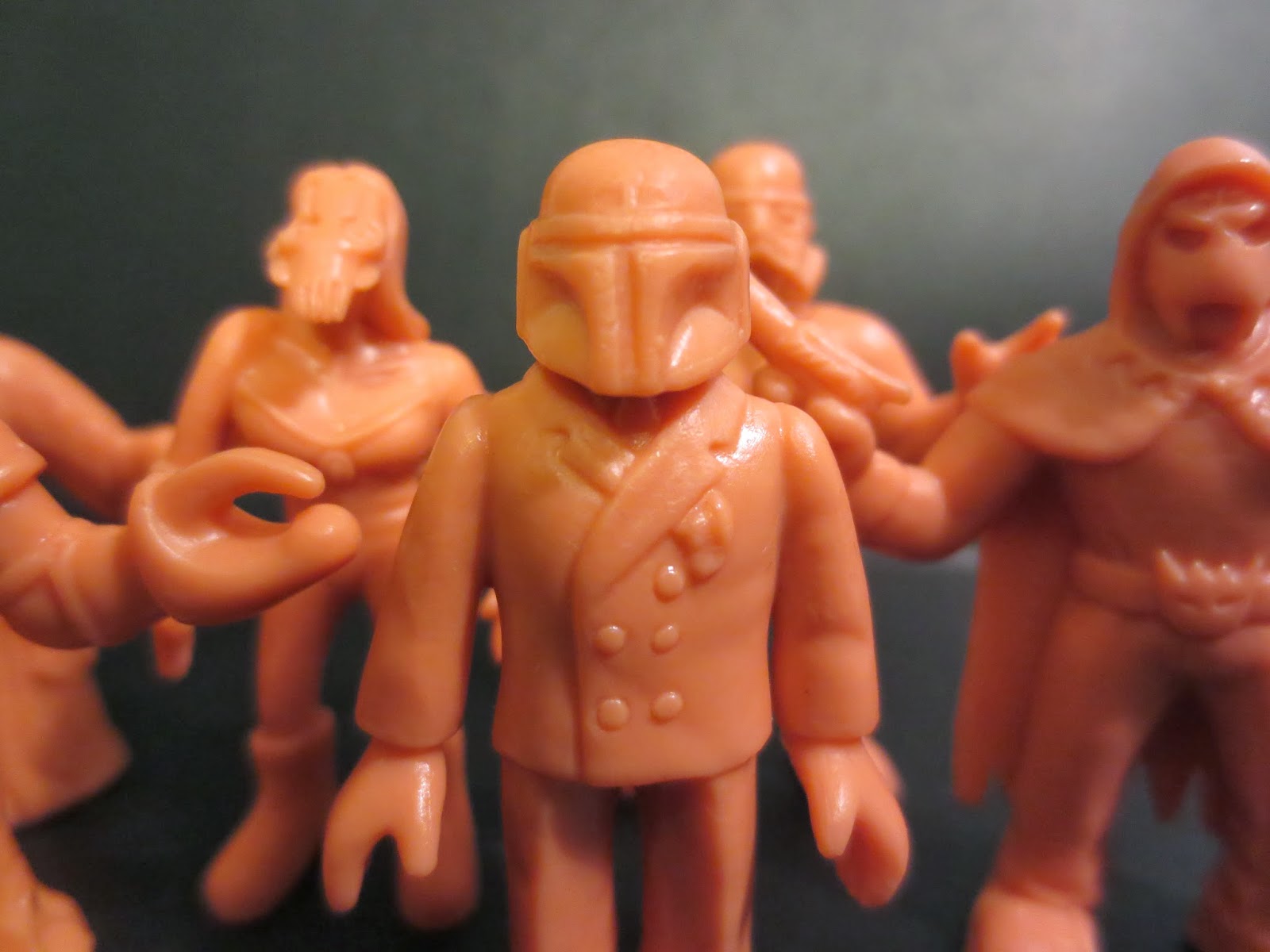 S.U.C.K.L.E. is a series of minifigures funded through Kickstarter and created by the Sucklord, a pop artist who specializes in creating pop culture (often Star Wars themed) toy art utilizing the look and feel of bootleg toy making through his company, Suckadelic. Like all good minifigure lines, S.U.C.K.L.E. is an acronym that stands for something: Simply unimportant collectible kitchy little eyesores. With designs based on projects by the Super Sucklord and friends and featuring the sculpting talents of George Gaspar of October Toys, this was definitely a cool way to get minifigure fans interested in the Suckadelic Universe. The intention of this projects seems to be that Kickstarter donations helped to fund the creation of this first batch of minis so that these guys can continue to be available and sold to the masses. If that's the case, hopefully more folks can pick these guys up later on down the road. I've always had a passion for unarticulated, non-painted minifigures and these guys are some of the purest examples of that aesthetic we've seen. Ready for a look at these cool guys? Then join me after the break... 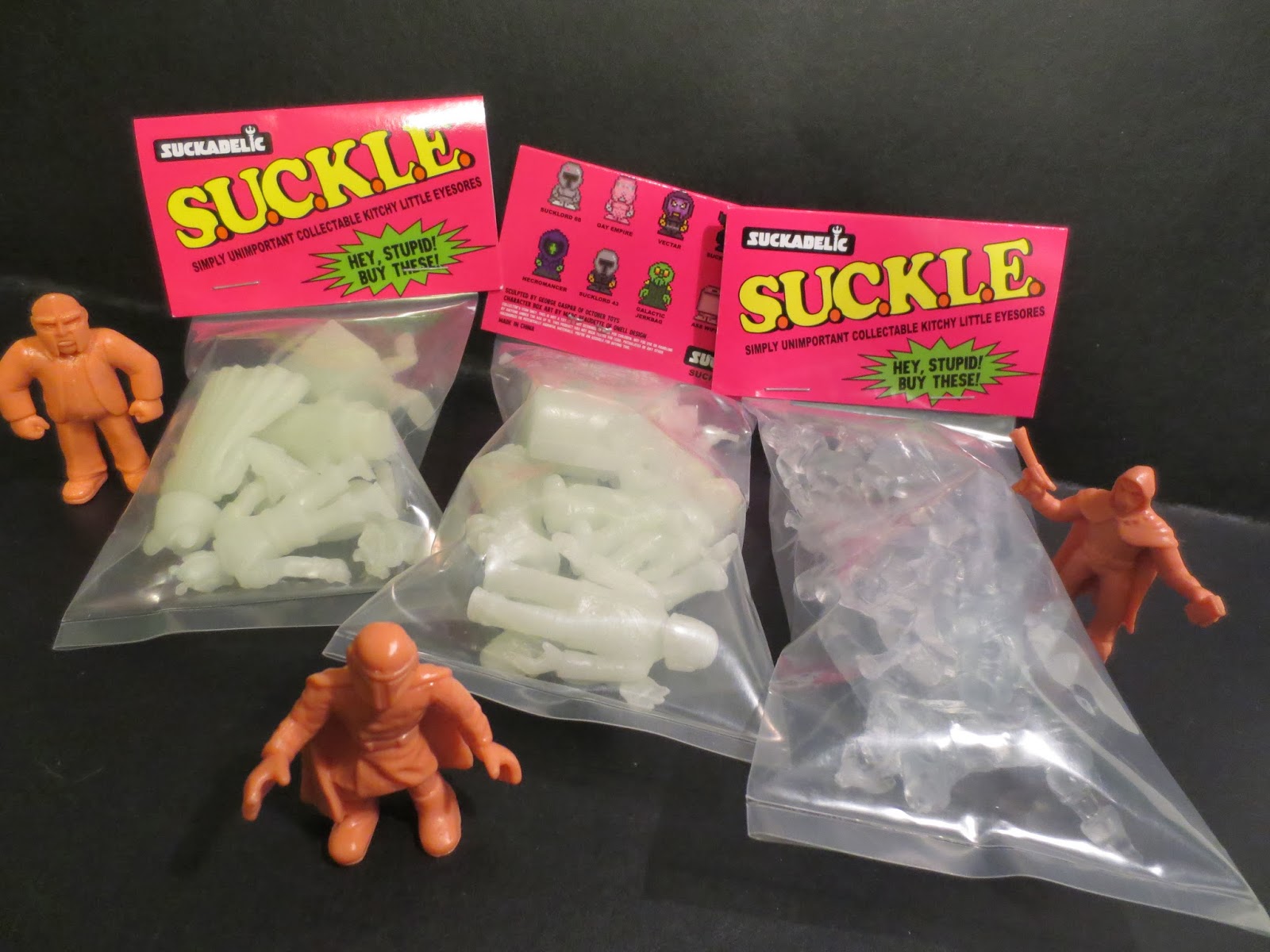 Each of the figures stands around 1 7/8th inches tall and is molded in a fairly solid PVC plastic. The basic 10 figures are available in a "flesh" colored plastic, Glow in the Dark plastic, and clear plastic. Each set of figures comes packaged in a plastic bag with a cardboard hanger tag on it (kind of like dollar store toys and plastic army men). 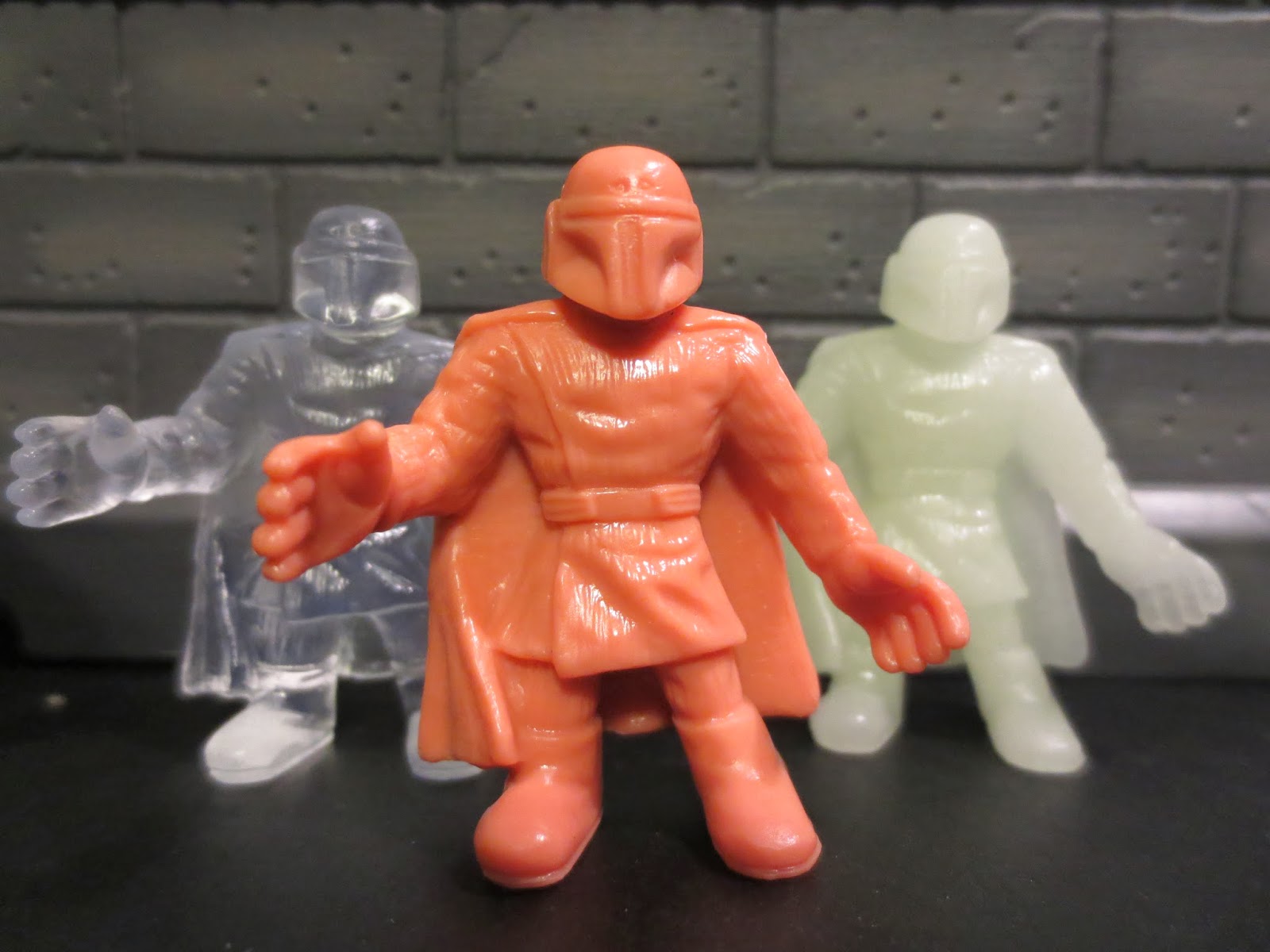 This appears to be a mash-up of the Sucklord's modified Boba Fett helmet on a Count Dooku body. I really like the way the cape drapes around the right leg. The level of detail on these guys is pretty fierce, especially the textured pattern on his tunic. The proportions are also very cool and extremely reminiscent of M.U.S.C.L.E.; big hands and stubby legs. 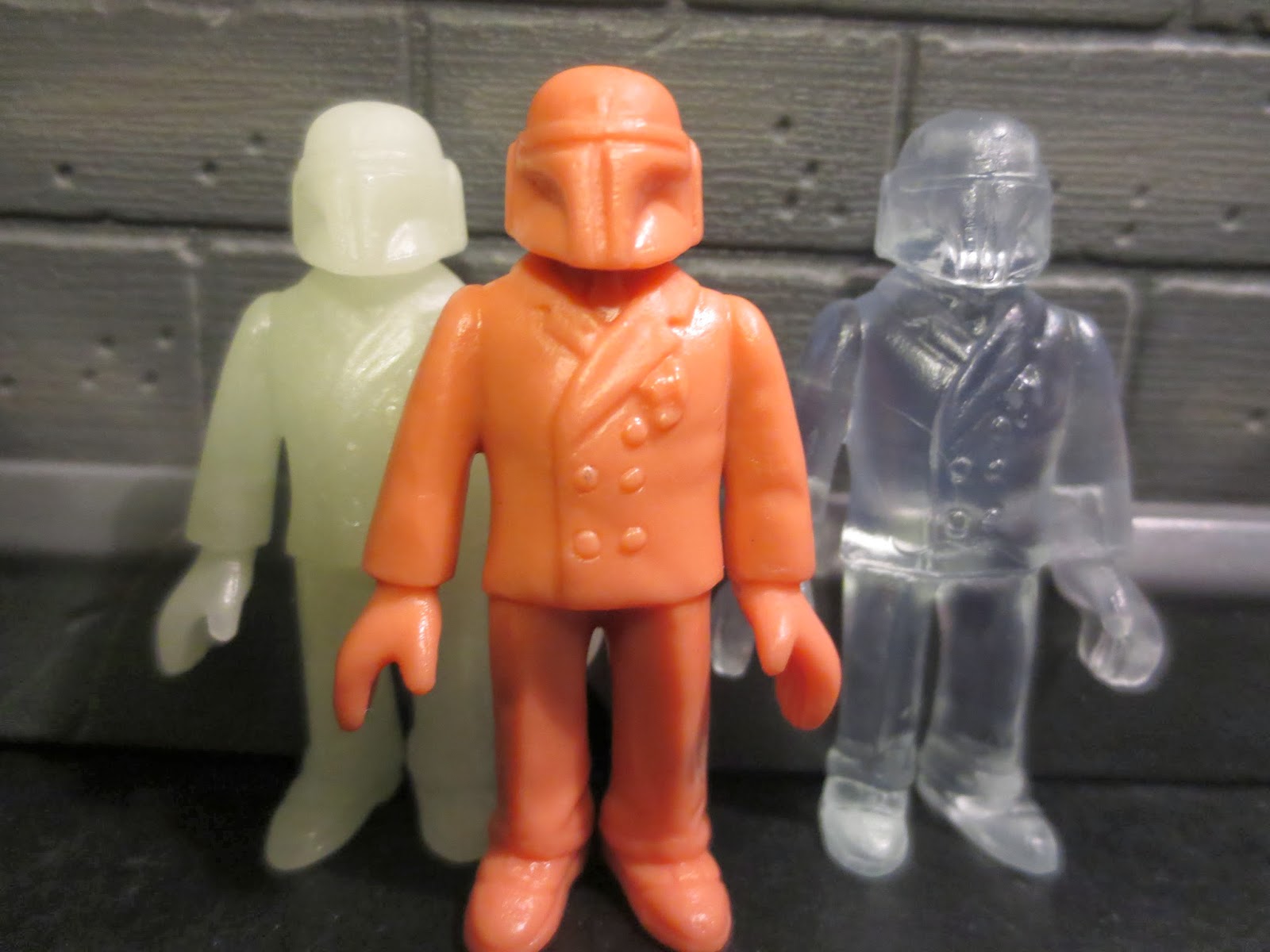 I really don't know what the numbers stand for, but this is a really cool variation of the Sucklord in an extremely nice suit. You can see that he's wearing a tie under his jacket (a for sure sign he's a classy gent!) and he also has a handkerchief poking out of his pocket. This is really a very funny, unusual figure as usually you're getting wrestlers, barbarians, and monsters in these types of lines-not guys in suits. Different is good, though. 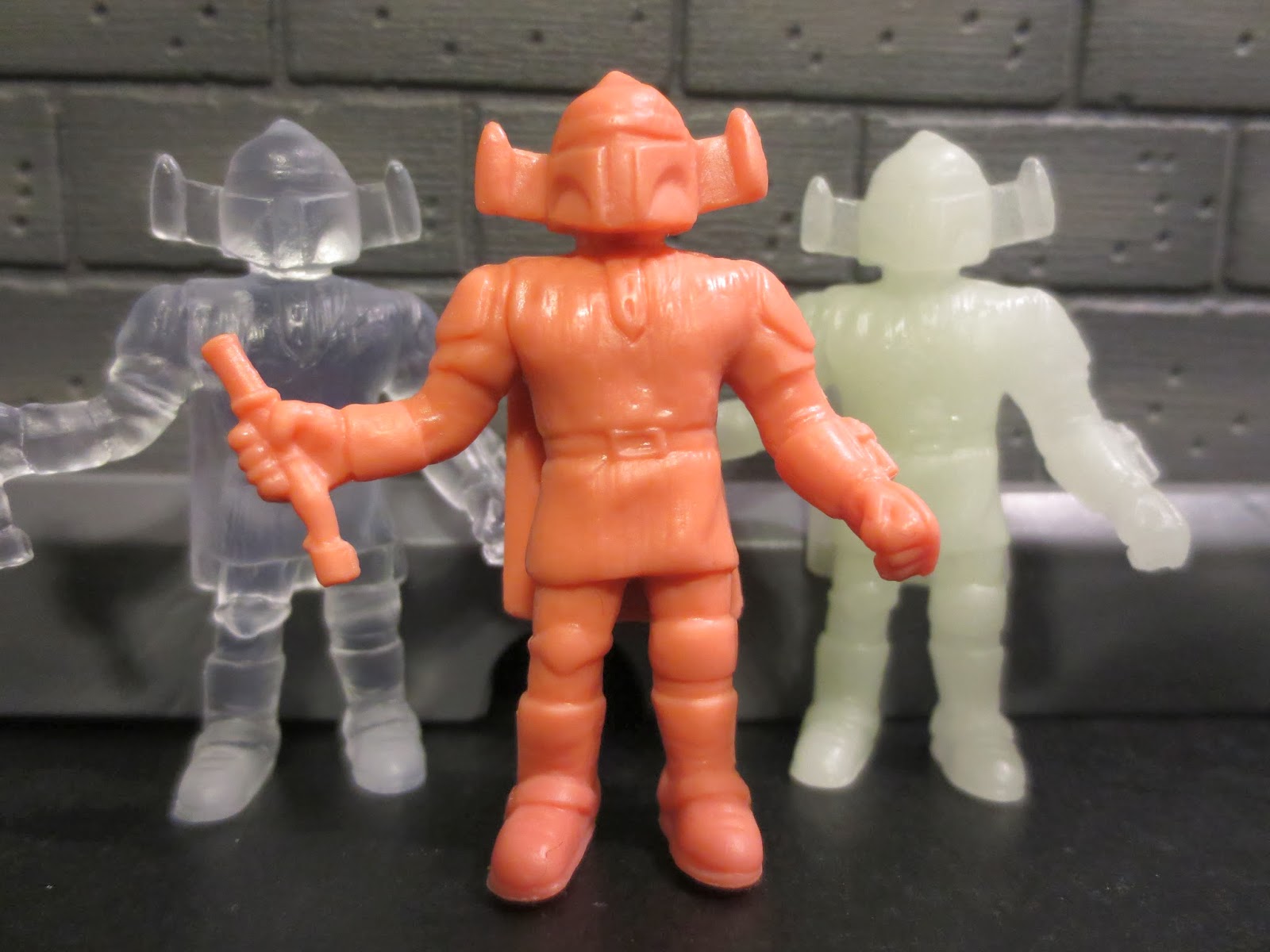 I have no clue what we're dealing with here- is this some ultimate evolved form of the Sucklord? Is he carrying a lightsaber hilt? A flashlight? A recorder? You be the judge! He's also got rockets on his Boba Fett styled helmet as well as Boba Fett styled arms. This guy really feels like a M.U.S.C.L.E. figure, which is a high compliment! 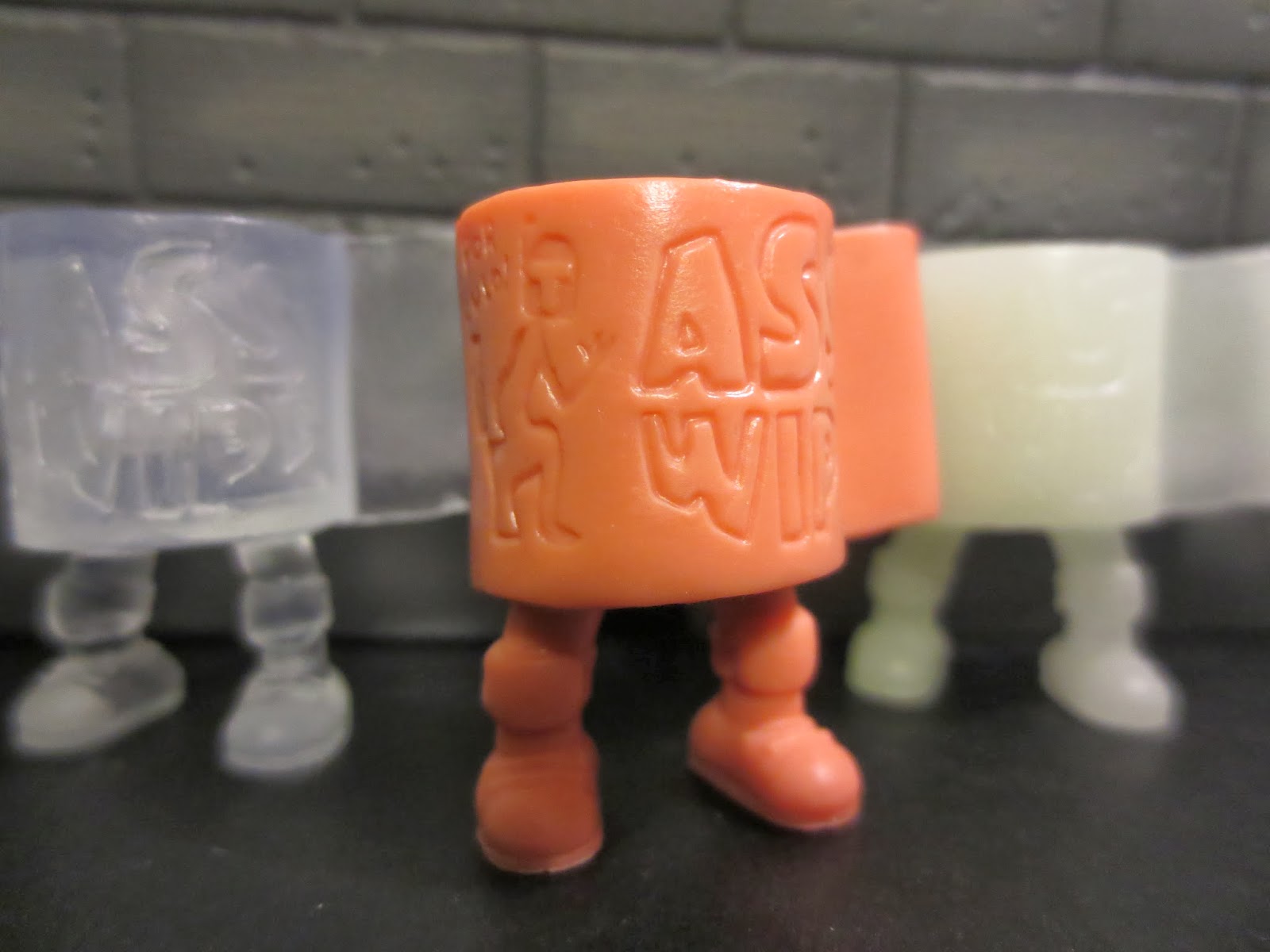 This is a giant role of toilet paper with the name "Ass Wipe" sculpted across it. It's crude but really funny. M.U.S.C.L.E. had so many weird guys random object figures like this and a roll of toilet paper just works so well. He'd go great with the OMFG series 1 Phantom Outhouse! There's also a sculpted image of the Sucklord sitting on a toilet with the words "por culo" which Google Translate assures me is a Spanish profanity meaning "for the ass." 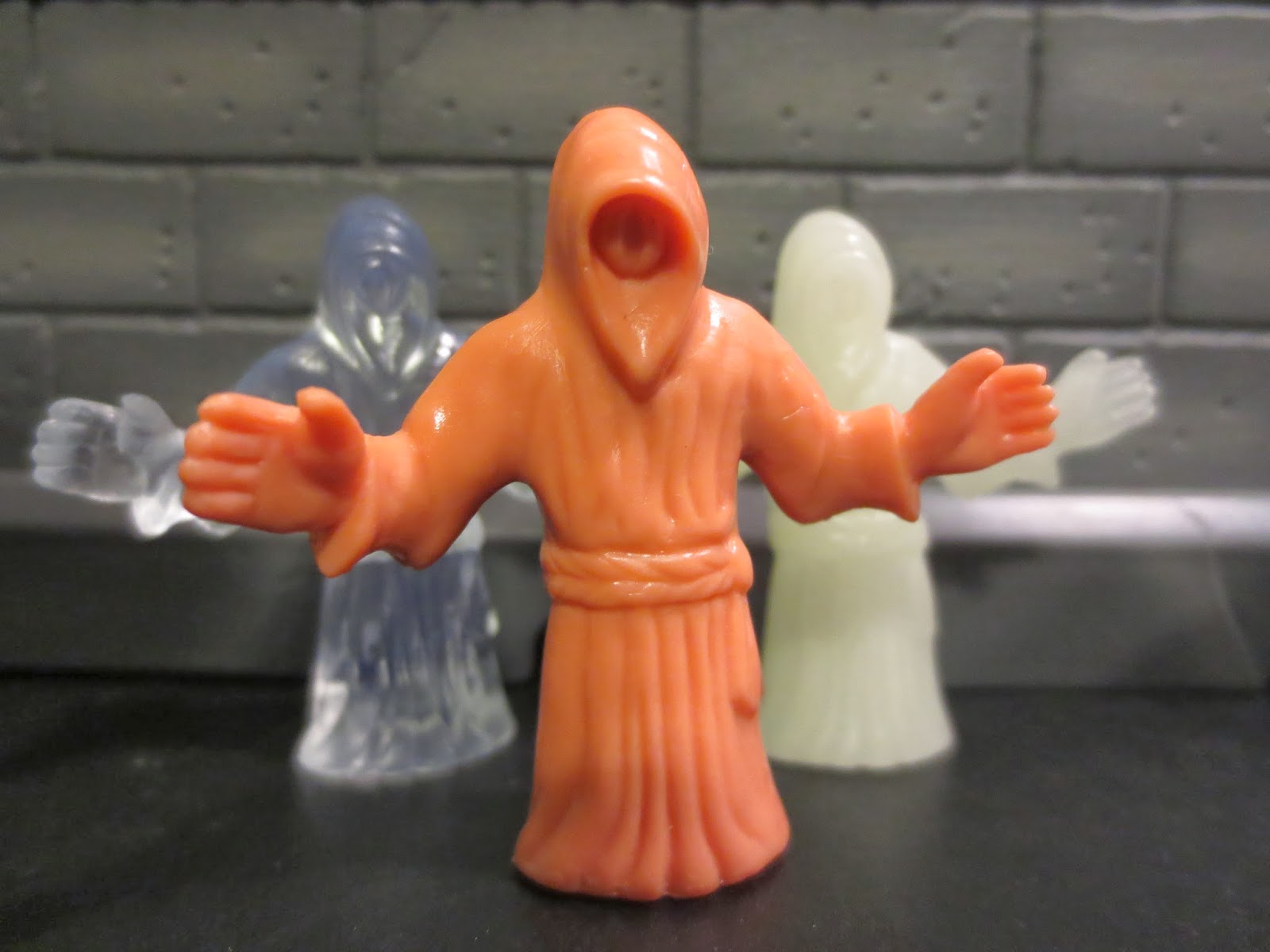 This guy rocks. He's a pretty simple robed figure with what looks like a single eye peeking out from beneath the hood of his cloak. Very creepy! The glow in the dark version looks super awesome. 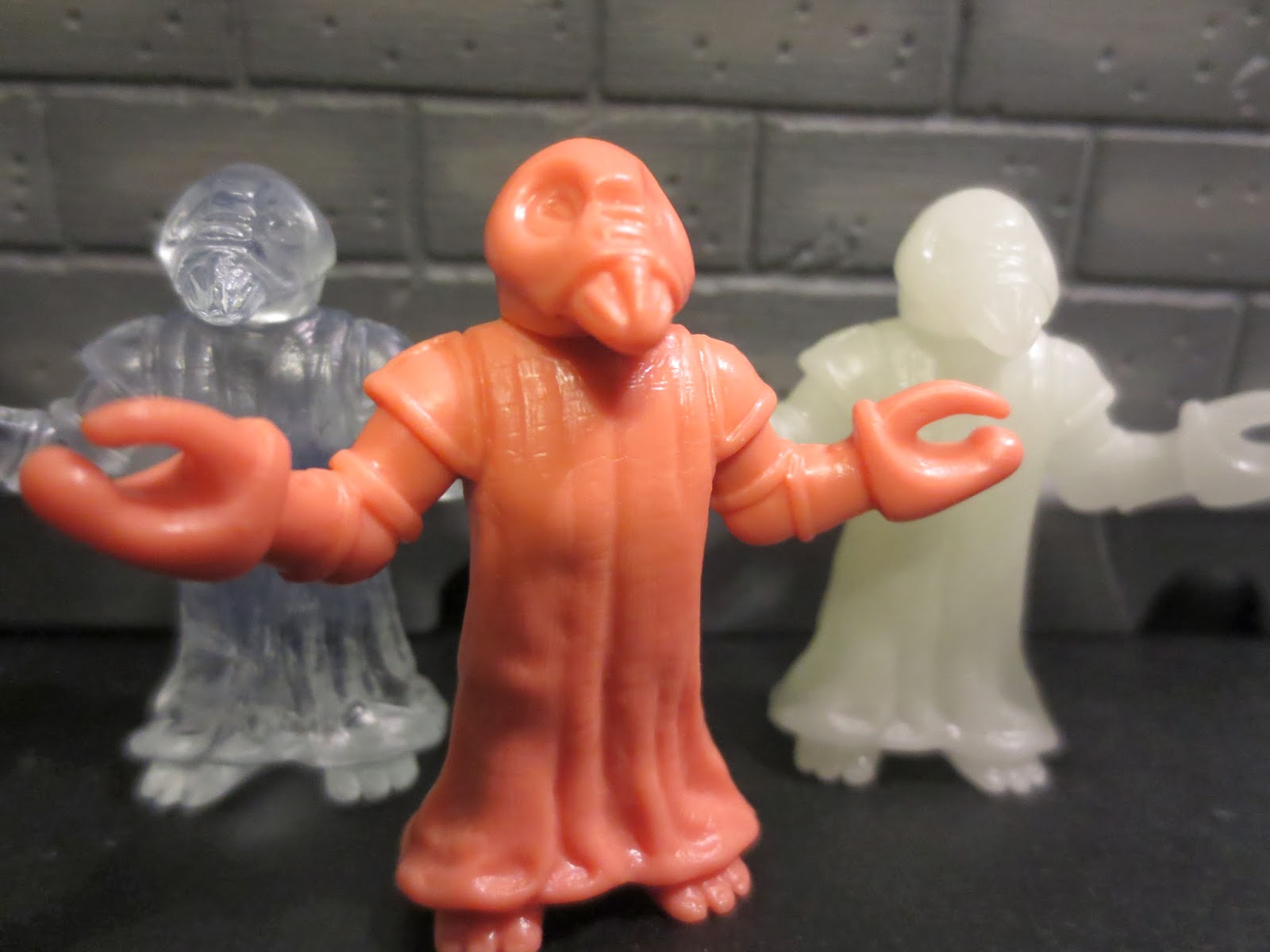 Galactic Jerkbag
I am neither sure what this guy is supposed to be nor am I aware of why he is referred to as the Galactic Jerkbag. Maybe he eats other people's lunches out of the fridge at work or doesn't flush after he uses the john. Who knows? He's wearing a robe that reminds me of something a "space emperor" might wear, although whether he's wearing anything underneath is anyone's guess. He's got some giant claws and a weird face that looks familiar, but I can't place it. 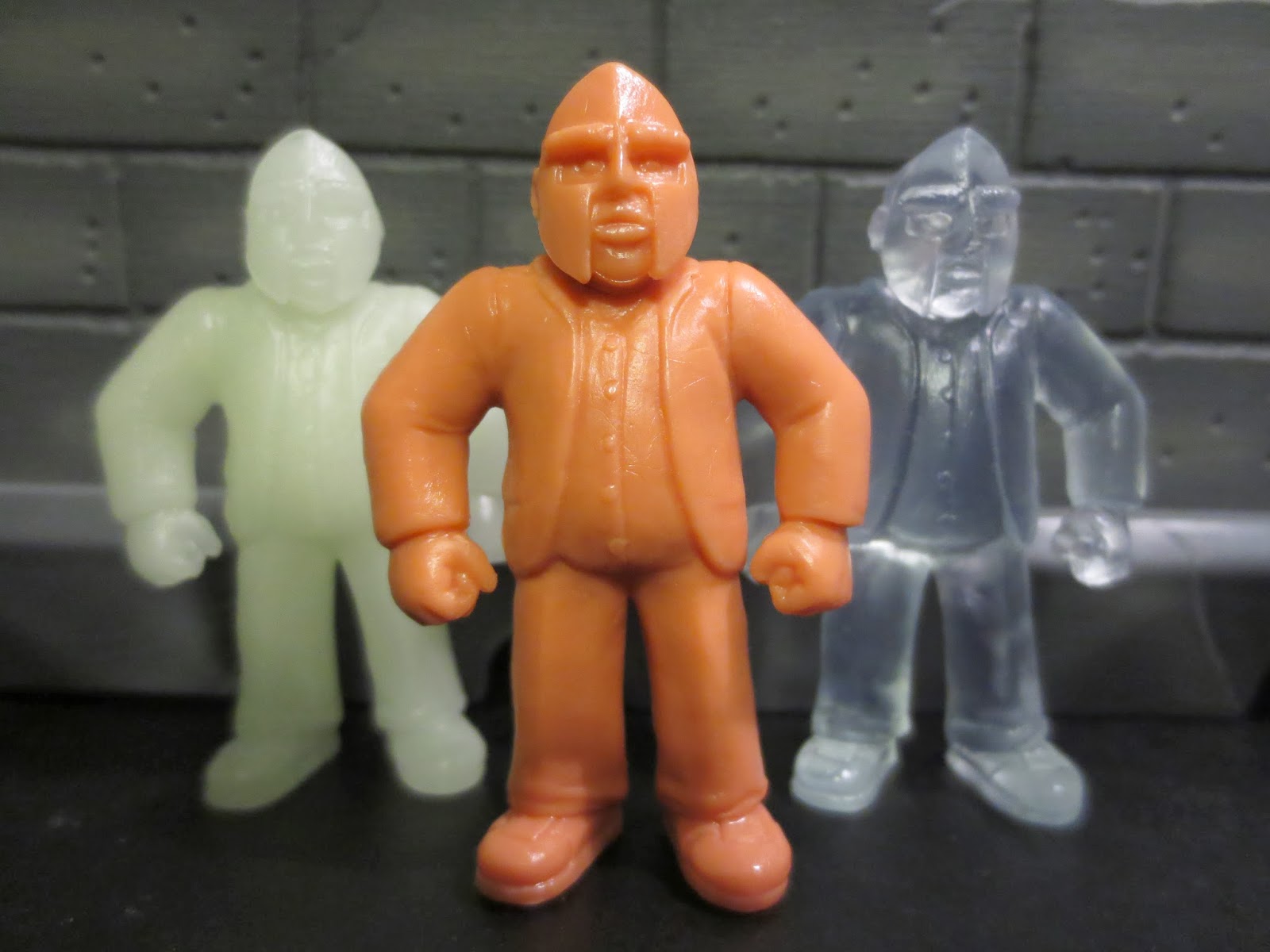 This guy is really cool.Yeah, he's just another guy in a suit but he's a tough looking guy in a suit. He's also wearing a mask. At first I thought it was a luchador mask but it doesn't cover the full head. It's flat, like a goalie's mask. Whatever, this guy's story is, I think he makes a great tough guy for your minifigures. Either a corrupt manager for M.U.S.C.L.E. guys or some kind of mafia enforcer. 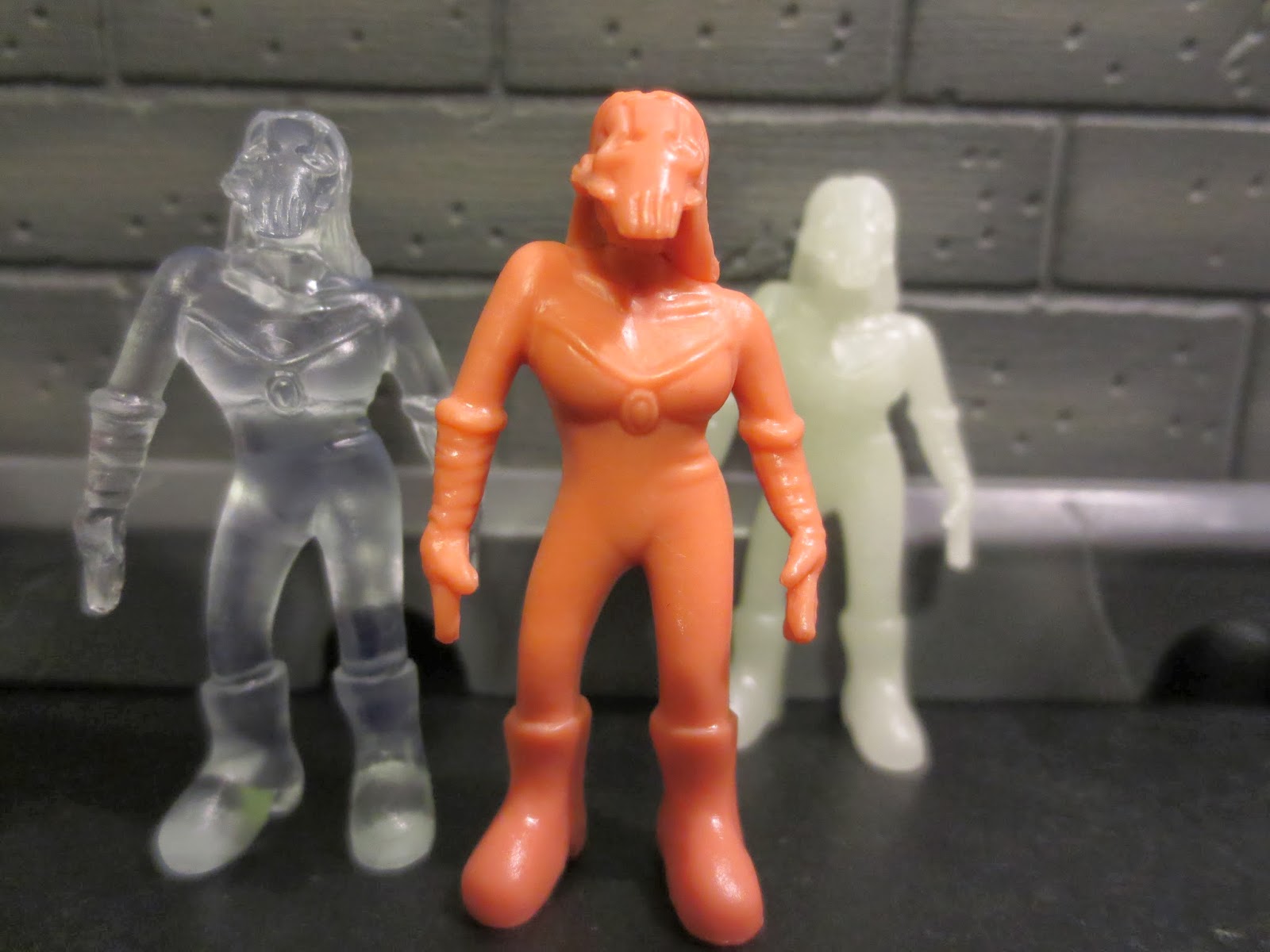 Another Bitch
I'm not sure if there's some joke here that I'm just not getting, but this is a really bizarre and funny figure. The body to me looks just like Rystall, the half Theelin dancer for Jabba the Hutt in the Return of the Jedi special edition. Except she's wearing boots. And she's got long hair. And instead of Rystall's face, you get General Grievous' face. There's no explaining this figure, but I'm OK with that. Fun Star Wars Expanded Universe Fact: Rystall later joined a musical group called The Palpatones. Yup. 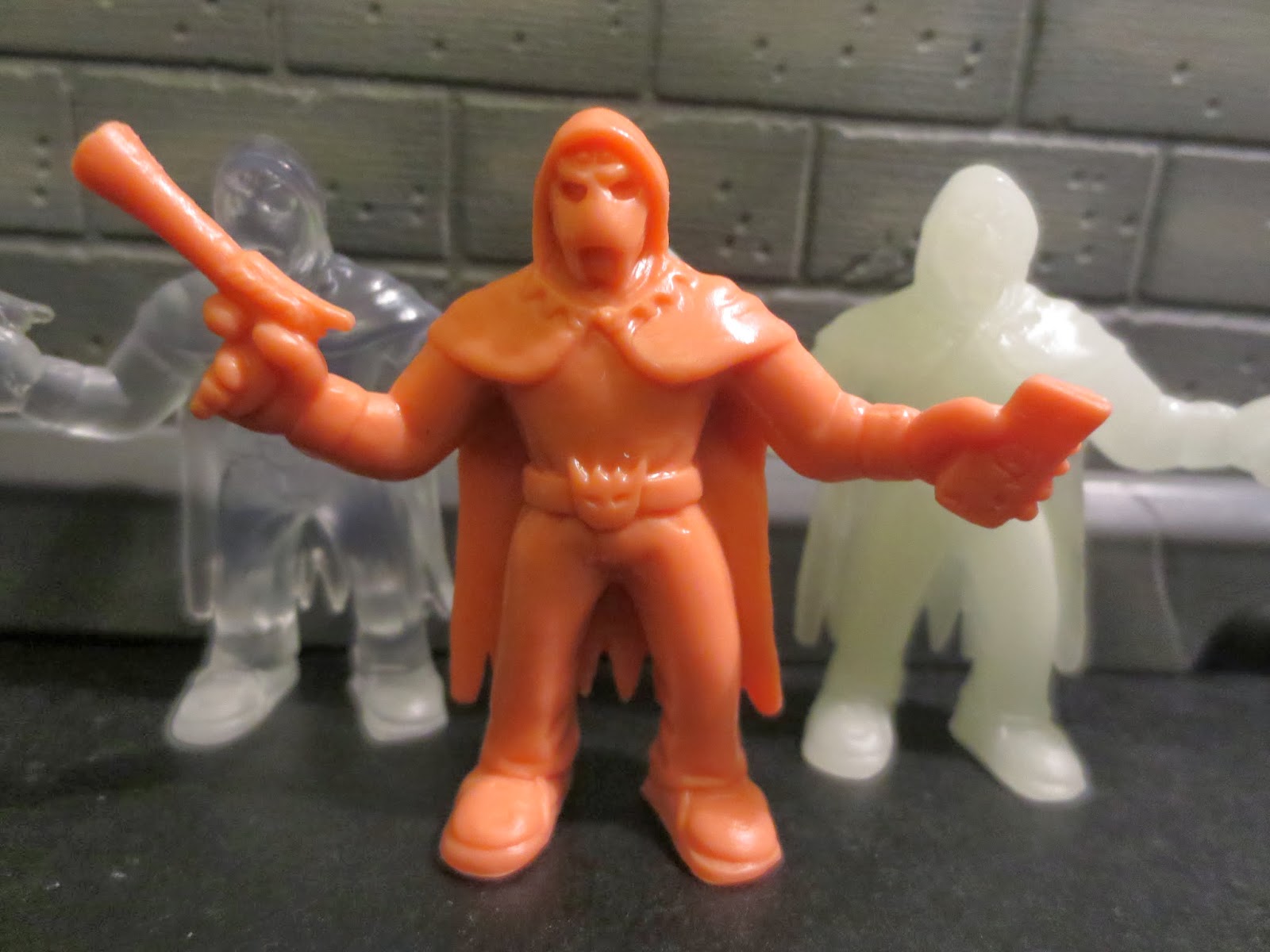 I find Vectar to be the most interesting character in this set. He's wearing a cool hooded cloak, a belt buckle that looks like an upside down Pac Man ghost, and a mask that reminds me of Dylan Baker's Halloween costume in Trick 'r Treat. That's all great, but what sends him over the top is that he's packing heat via a very cool retro sci-fi looking pistol in his right hand and a stack of cash in his left. I love this guy and he is definitely my favorite basic figure in the set. 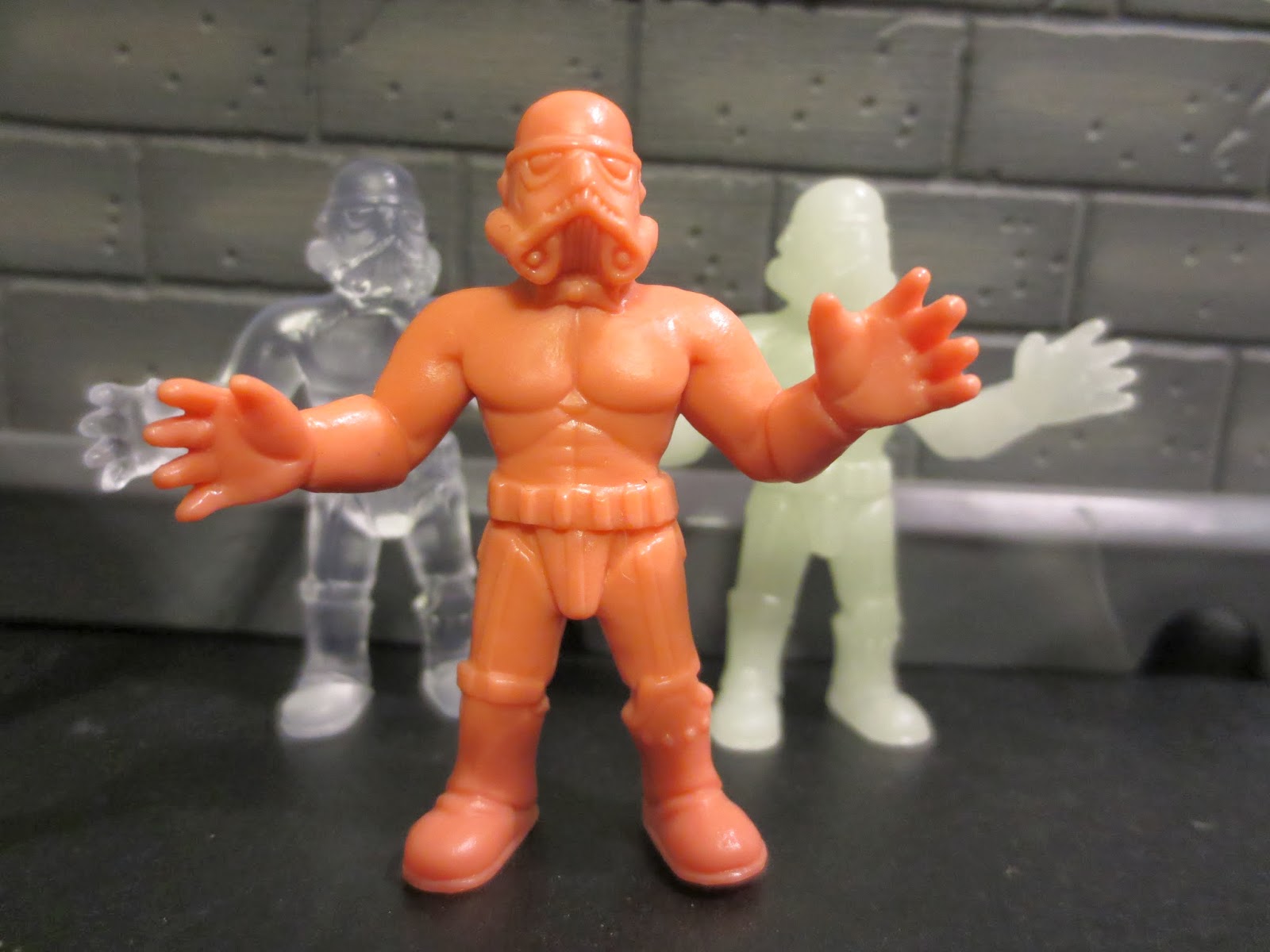 One of Suckadelic toys longest running lines is Gay Empire, a series of art/bootleg Star Wars figures that present familiar characters molded all in pink and often shirtess. This minifigure is clearly a shirtless Stormtrooper wearing only the lower part of his standard issue outfit. This guy is really bizarre but also kind of funny in a strange, politically incorrect sort of way. It would be interesting if someday the Sucklord sold a set of just four or five of these guys so that you could army build them if you wanted to. 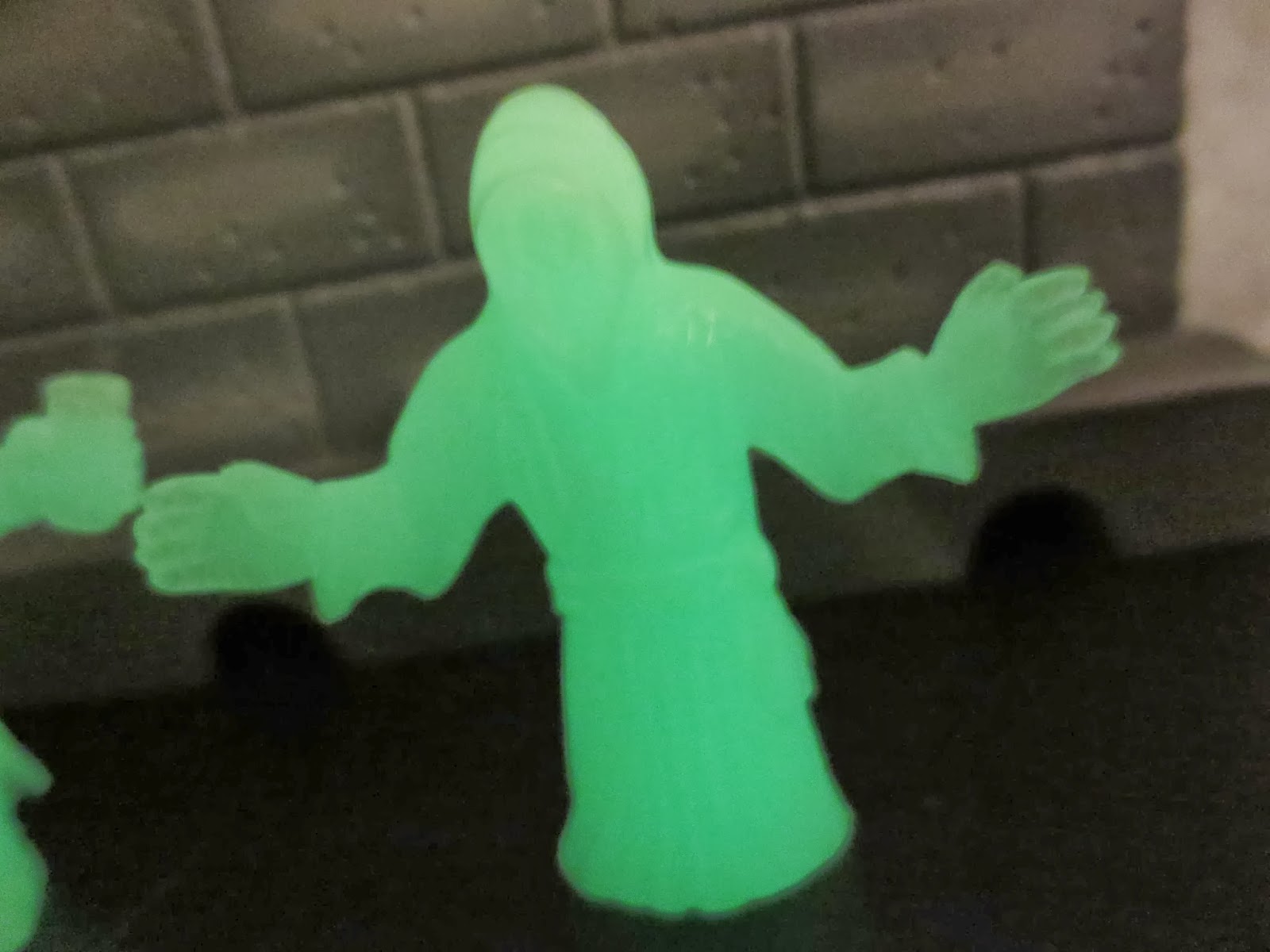 Thanks to the success of the Kickstarter project, backers pitching in at certain levels also gained access to five additional stretch goal figures. These guys came molded in clear plastic and glow in the dark plastic, but strangely no "flesh" colored plastic. For the stretch goals, we have: 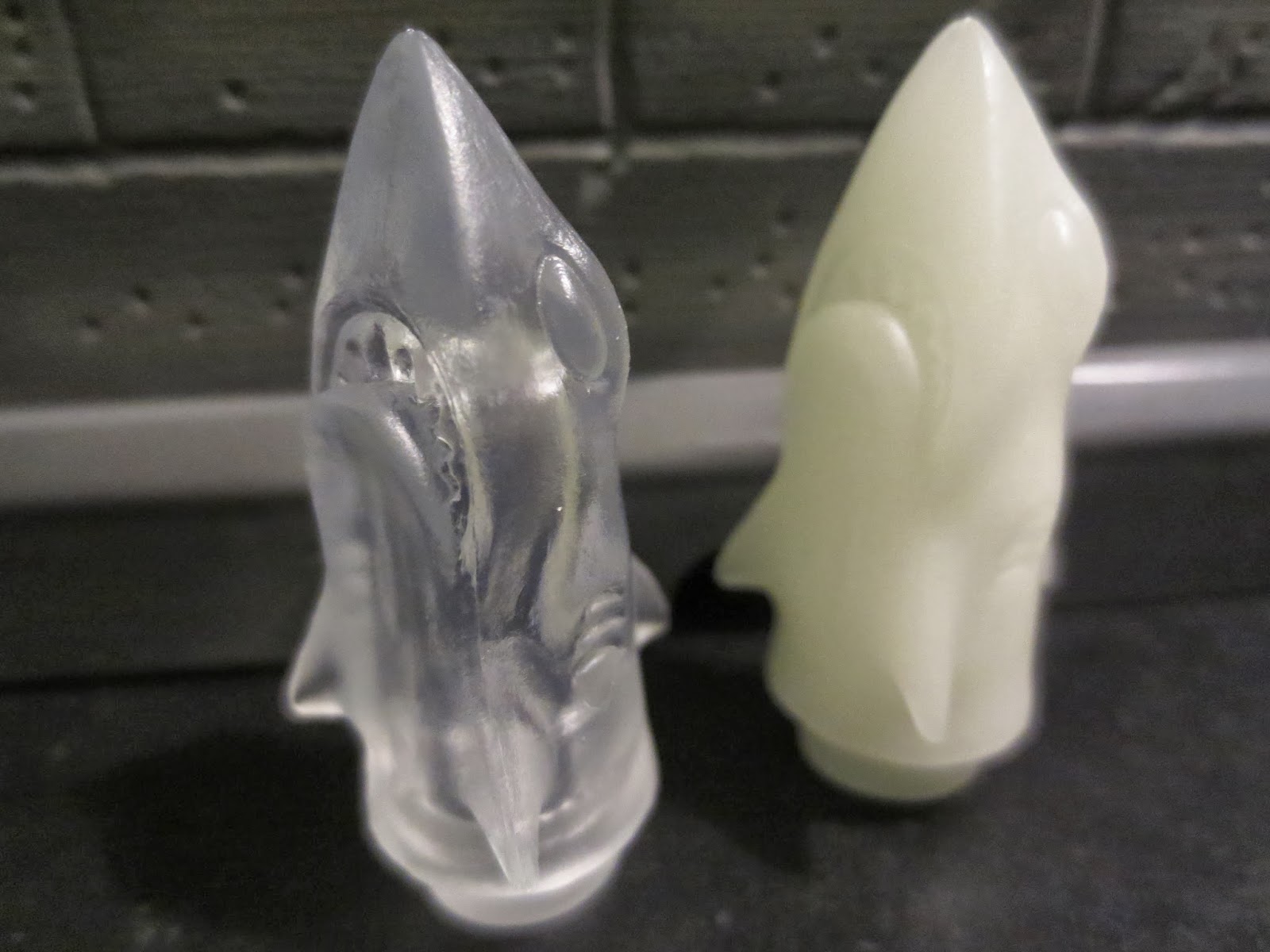 This is a pretty fearsome looking shark, except for the fact that his rear half is flat and round. Hey, that lets him stand up, though? This figure really cracks me up for some reason; it's just so darn odd. The shark himself is nicely detailed, though, with a mouth of sharp teeth, gills, and fins. I really wonder what the design philosophy was behind this guy, as he is so strangely wonderful. 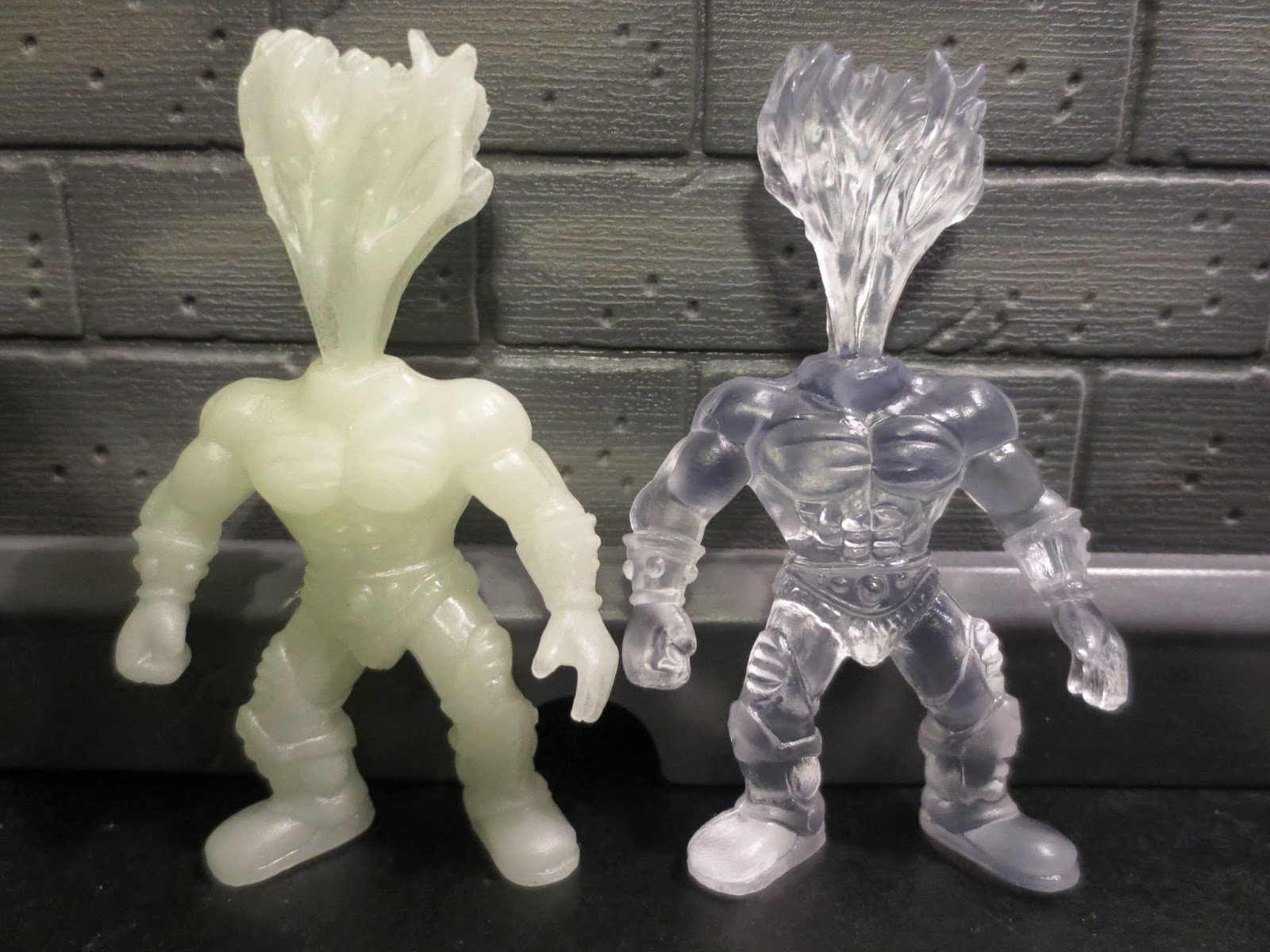 The original Carrator looks like a orange and green vintage Masters of the Universe body (I think it's Trap Jaw) with green stems emerging from his neck. S.U.C.K.L.E. Carrator here is a nice minifigure representation of that guy. He simultaneously makes me think how cool a M.U.S.C.L.E. styled MOTU line could be and how much I want to pit this guy up against a rabbit themed minifigure. 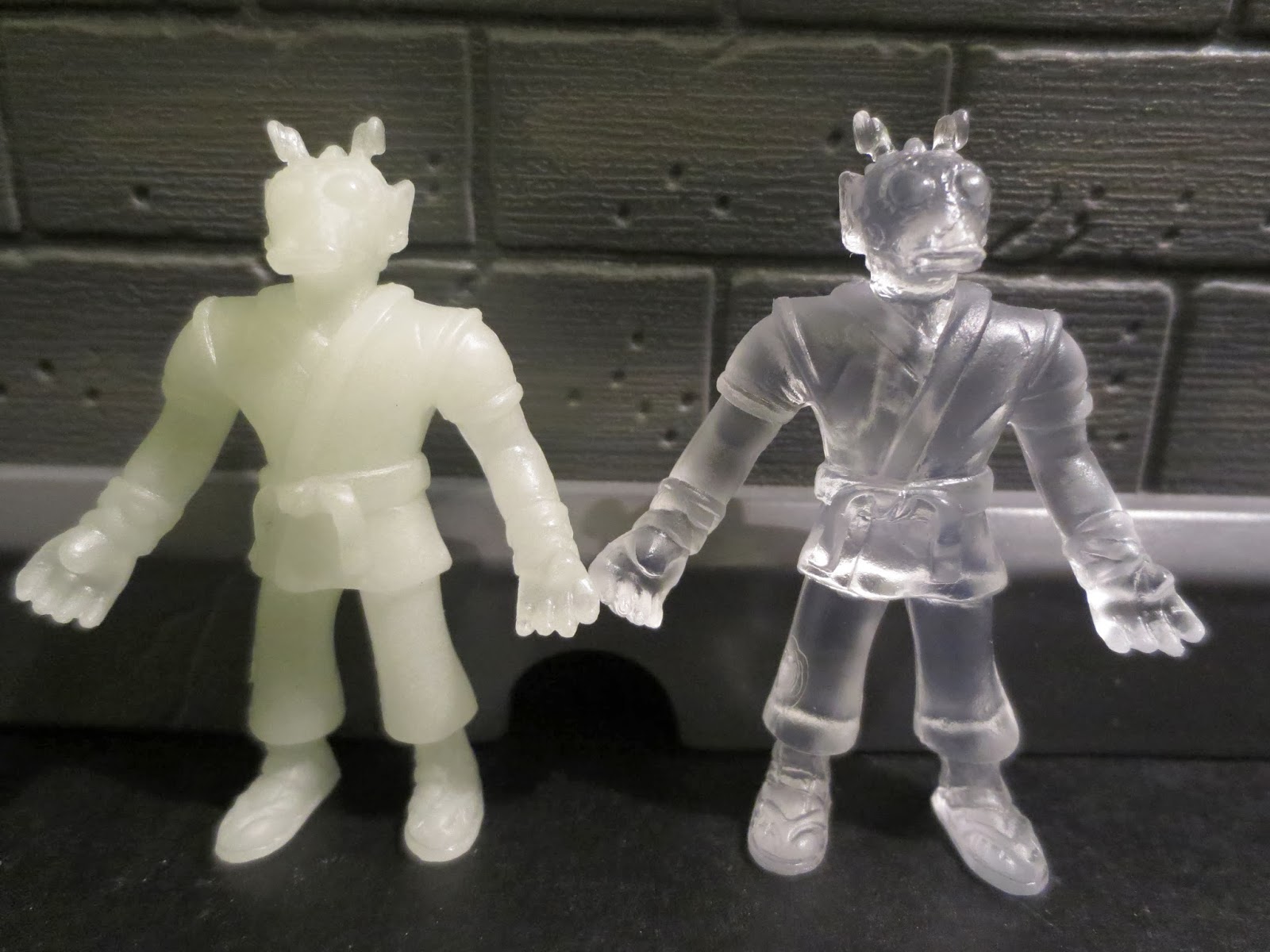 Karate Chump looks like everyone's favorite Rodian, Greedo, decked out in a karate leg. Perhaps this is intended to represent a future Star Wars re-edit where instead of using blasters everyone just punches and kicks, because that's what George Lucas originally intended. Then we'll have a whole "Han sucker punched Greedo" controversy. Good luck, Karate Chump. Now sweep the leg! Sweep the leg! 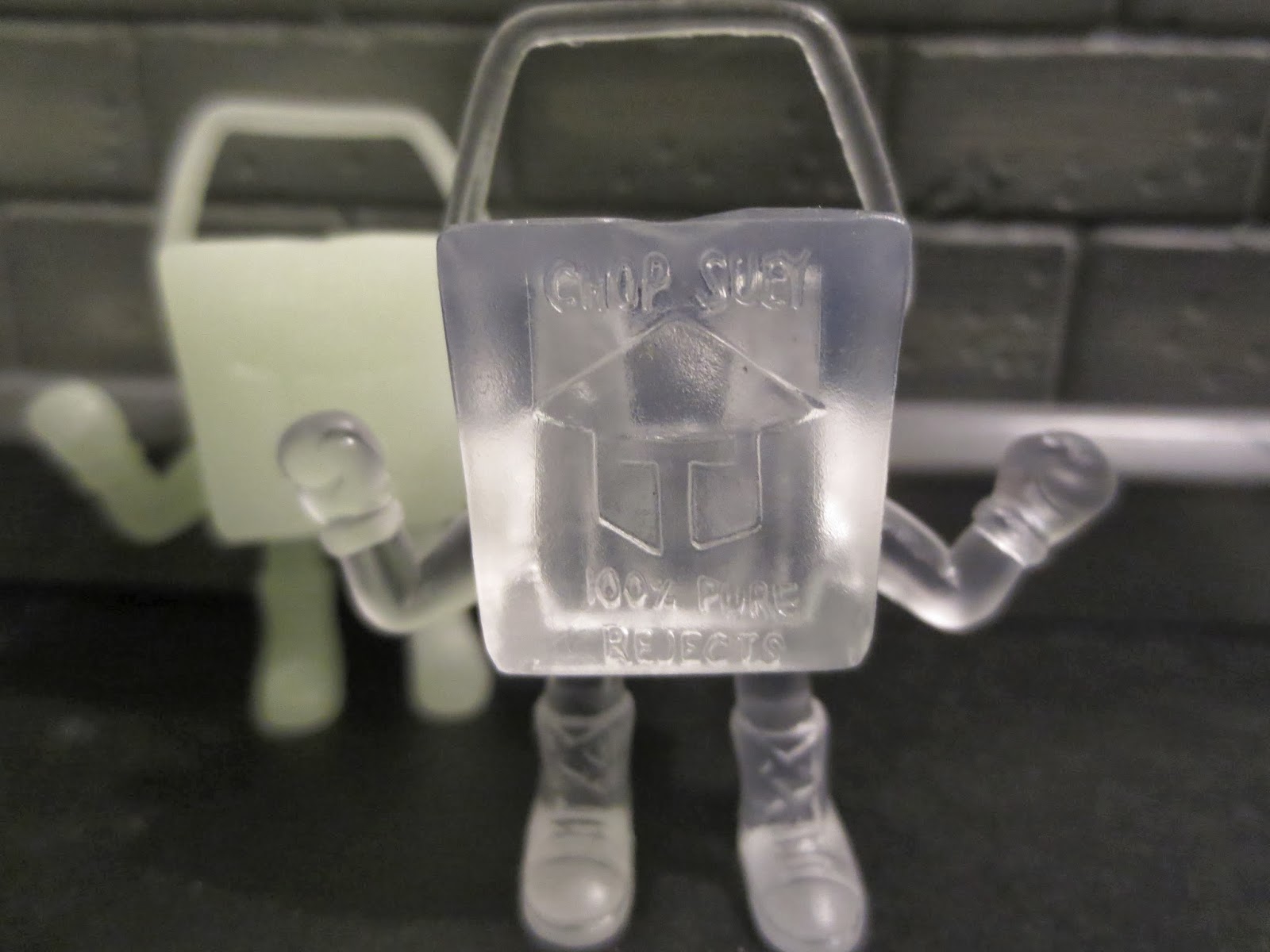 Here's another of my favorites from this set. I guess I just love the anthropomorphic objects and a living Chinese food box is just tops in my book. In college I had this really cool Weezer t-shirt that had a guitar playing Chinese food box, so I've always had an affinity for such things. Plus, I really love Chinese food. It's tough to see the detail on this guy since he's molded in clear plastic but the front says "Chop Suey 100% Pure Rejects" and the rear says "Suckadelic" above a little etched pagoda. He's also wearing boxing gloves. I hope he's filled with either Curry Chicken or General Tso's Chicken. 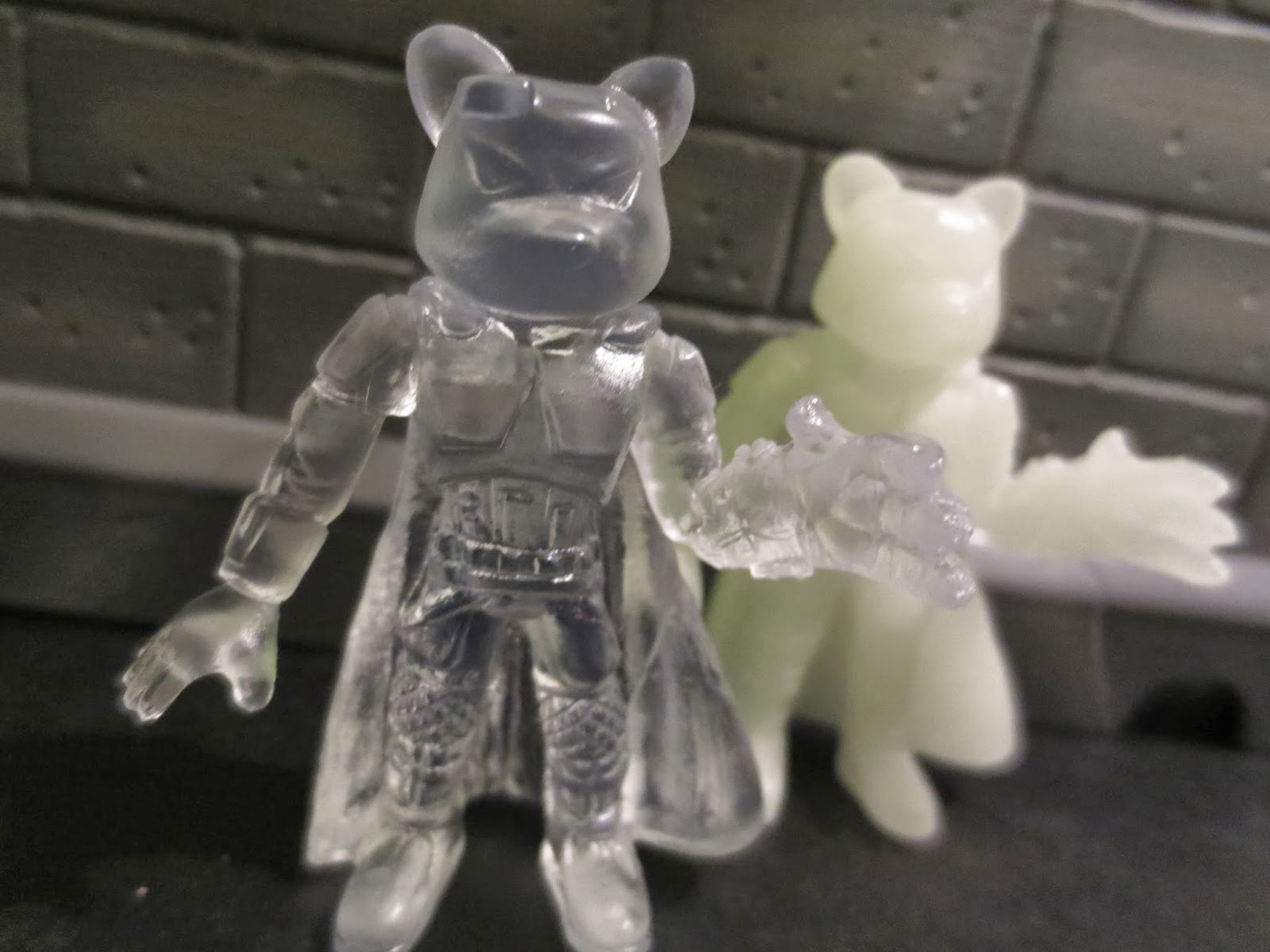 This guy is a mash-up alright: His chest looks like a Stormtrooper torso, but he's wearing a cape, has a giant bear head, and a massive claw on his left arm. I have no clue about what this guy is supposed to be, but that doesn't mean he isn't fun. He definitely looks like a fearsome warrior of some kind, something I can always appreciate. 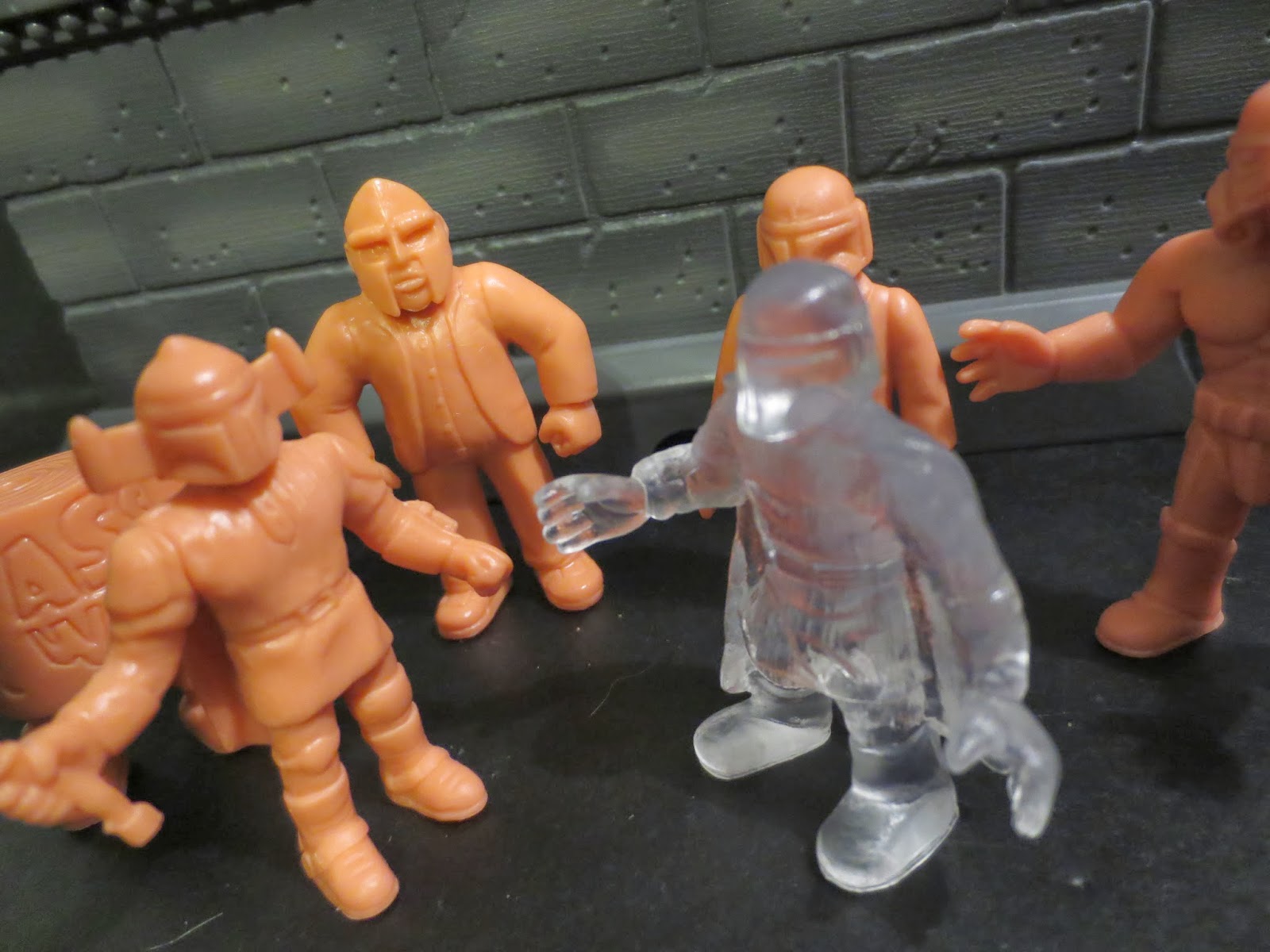 I really like these guys and definitely feel this set was a great value. For a $40 dollar Kickstarter donation I received 40 high quality minifigures: the main ten figures in each of the three colorways and the five add ons in the glow in the dark and clear colorways. My only real complaint about this set is that I wish the five stretch goal figures had come in the "flesh" colored plastic as well as that's definitely my ideal color for most minifigures. Still, 40 minis for $40 bucks? That's unreal! Each figure is really cool and while there are some I like better than others there isn't a single one that really leaves me completely cold. This was a fantastic project that offered some real value to backers. I hope the Sucklord offers some more figures in the future as I always love to see little plastic minis get the love they deserve. While the Sucklord loves to denigrate his product and would probably be happier if I gave these guys a rating of Crap, I'm going to defy his wishes and rate these guys a Great and a 1/2. I'll put up with his scorn if it encourages you to seek these guys out to battle your other minifigures.

I'm not sure where the Sucklord plans on selling these, but you can monitor his website for updates and details. He also sells lots of other cheap bootleg crap over there that you'd probably like to add to your toy shelves, so visit him today!