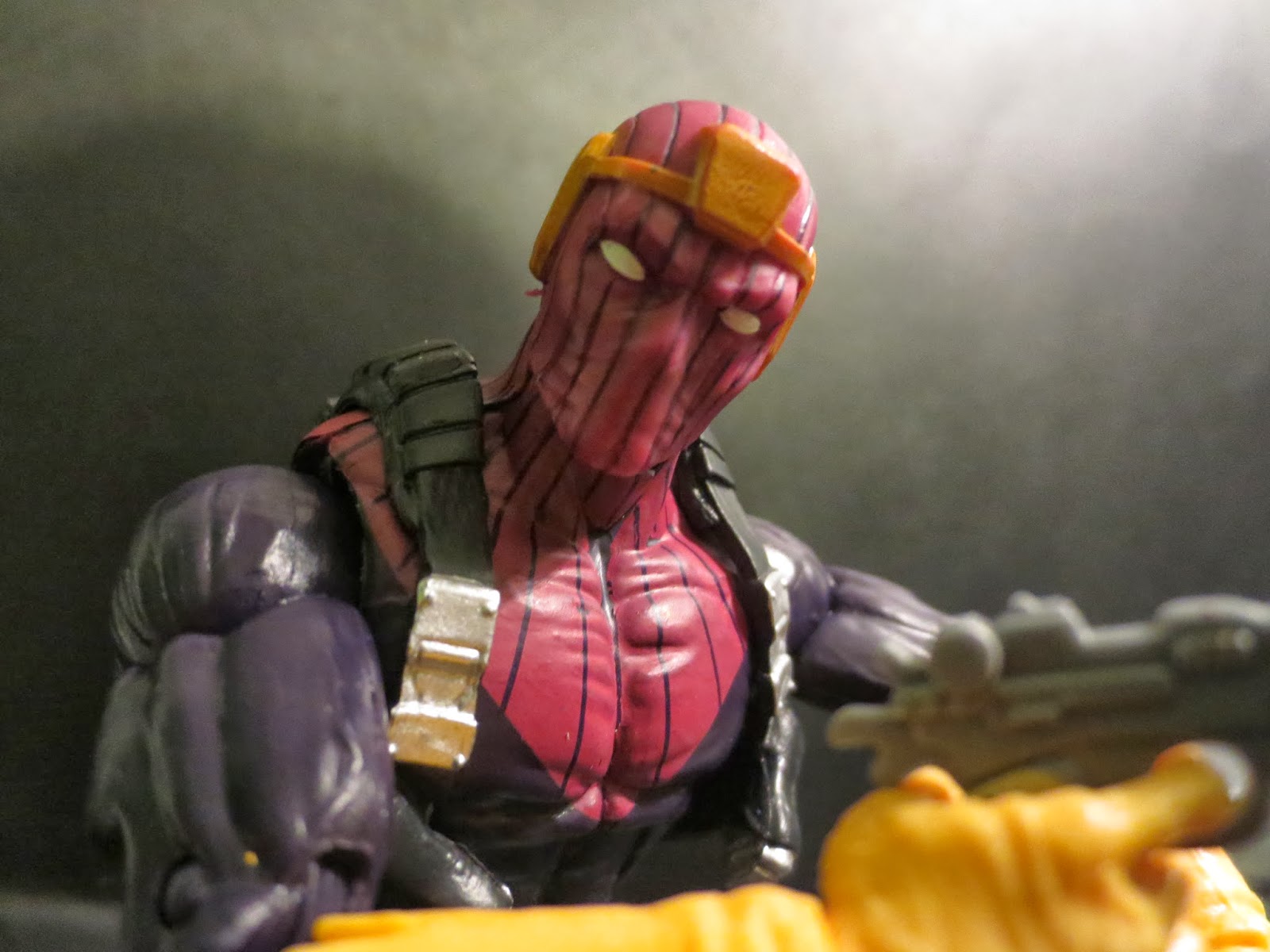 Baron Zemo is one of those Marvel characters I know next to nothing about. I could definitely pick him out of a line-up, which is due more to my familiarity with his toy from Mattel's 1984 Secret Wars toyline (Zemo didn't even appear in the Secret Wars comic series) than with my familiarity with him as a character in any storyline. Remember, these last few Marvel figures I've reviewed actually belong to the Reel Brad Bell. Since he's always too busy writing Epic News, eating chicken wraps, and buying and selling Mondo posters. Don't worry, kids. Ol' Barbecue17 is accustomed to doing the heavy lifting. I asked Brad to tell me what he could about Baron Zemo. All he told me was that he was essentially Marvel's version of Deathstroke. Which is kind of weird since Deadpool is Marvel's parody of Deathstroke. I could do some research on this guy's history, but the again so could you. How about right now we just focus on the toy, shall we? 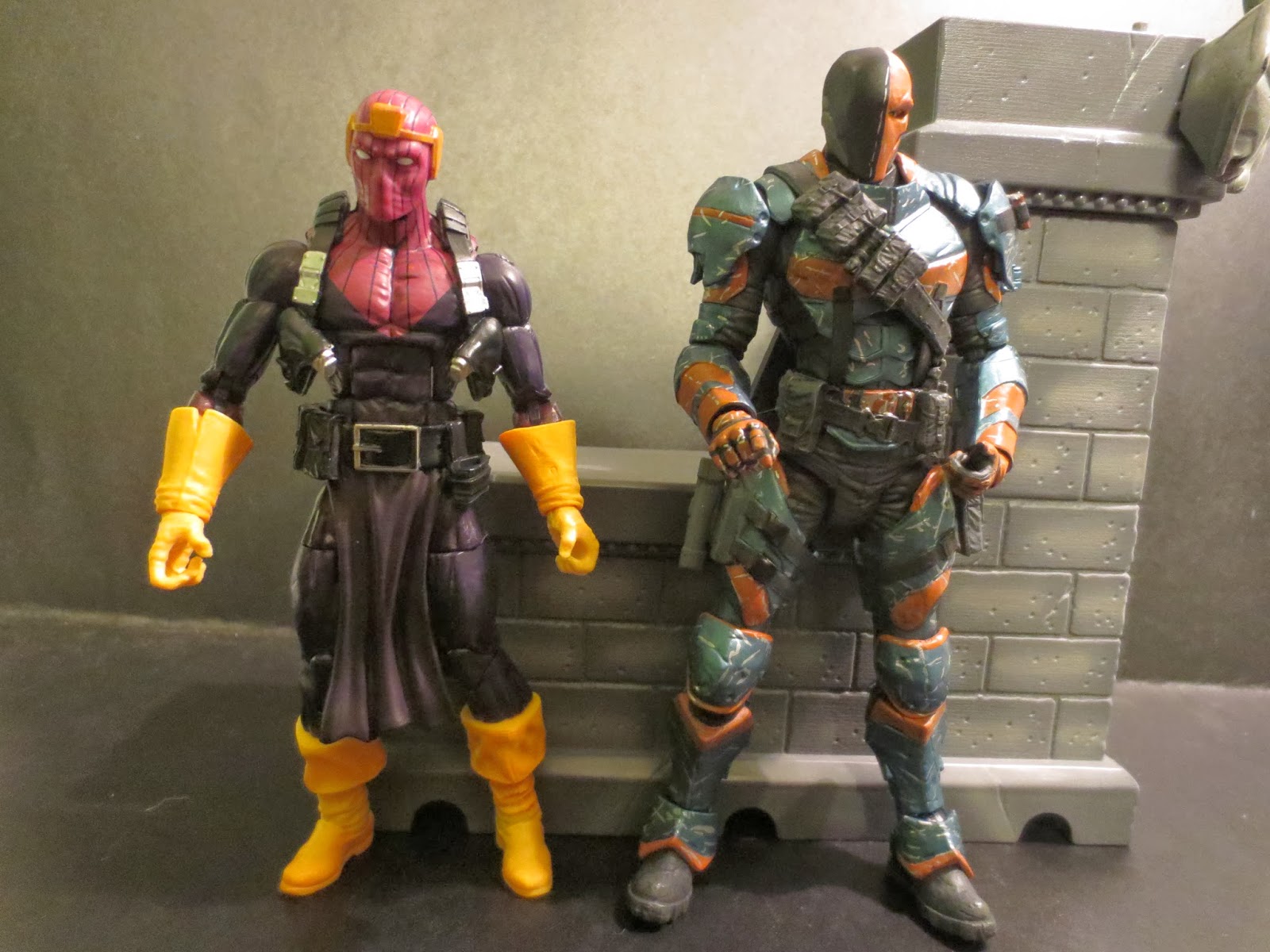 Baron Zemo is right at 6 1/2 inches tall and definitely shares parts from a number of previous Marvel Legends figures, including the recently reviewed Hydra Agent. While there are two different Baron Zemos (Dr. Heinrich Zemo, the 12th Baron Zemo and his son Helmut J. Zemo, the 13th Baron Zemo) this guy seems to be based off of the more recent appearances of Helmut J. Zemo. He's got a comic book styled appearance that should make him fit in wonderfully with any of your previous Marvel Legends figures. Baron Zemo has been released in Marvel Legends on a few occasions before, but never in this specific costume. 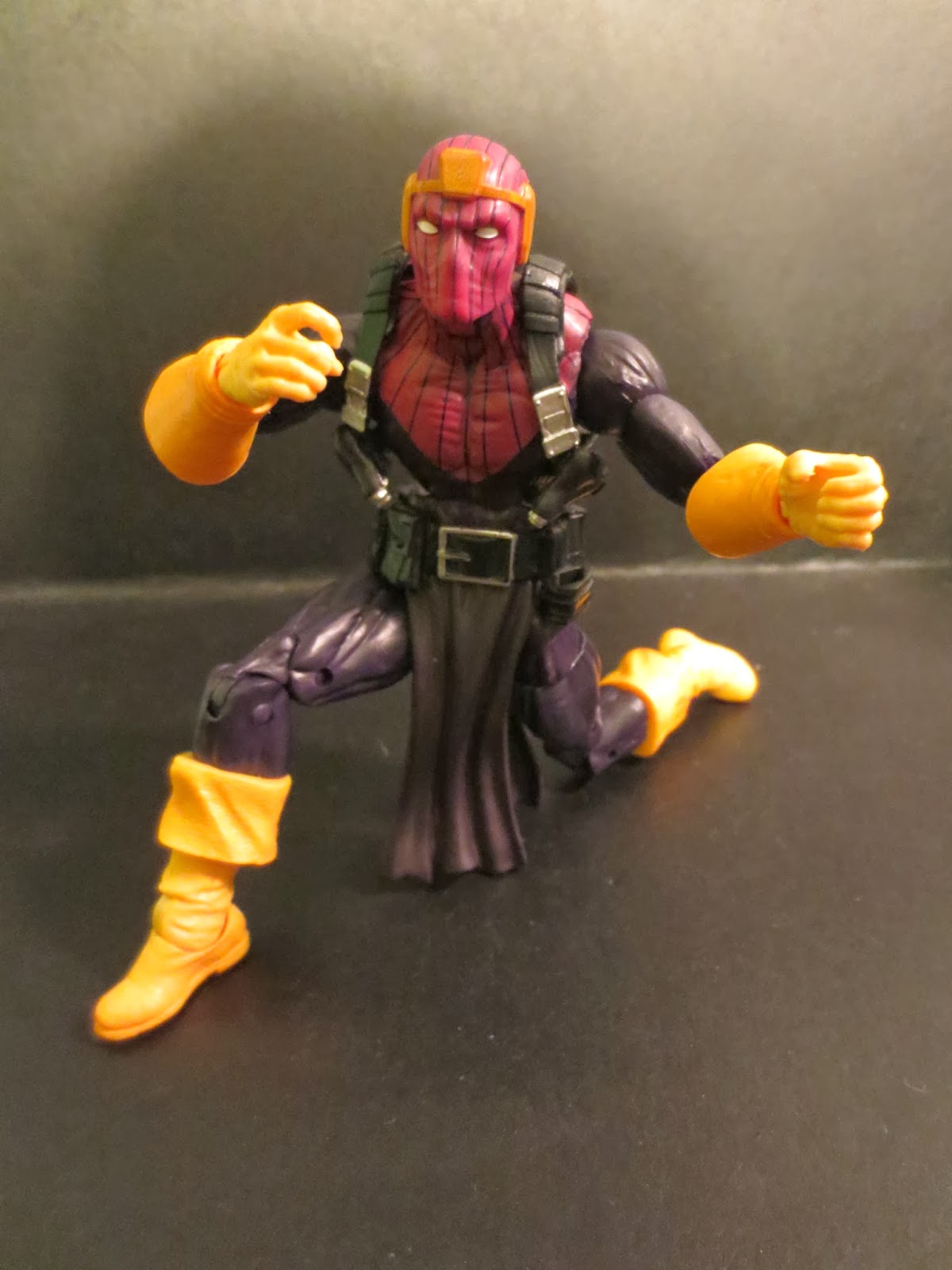 Baron Zemo has the newer Marvel Legends articulation which I greatly appreciate over the older style. He features: swivel/ hinge ankles, swivel boots, double hinge knees, swivel thighs, ball jointed hips, a swivel waist, hinged torso, swivel/hinge shoulders, swivel biceps, double hinged elbows, swivel forearms, swivel/ hinge wrists, a hinged neck, and a ball jointed head. He feels incredibly solid and has some wonderful articulation, none of which is impeded by either his shoulder holsters or his skirt. This guy is a ton of fun to play with as he just has nice, solid articulation that allows for a lot of great movement. He can even take a pretty decent crouching pose. 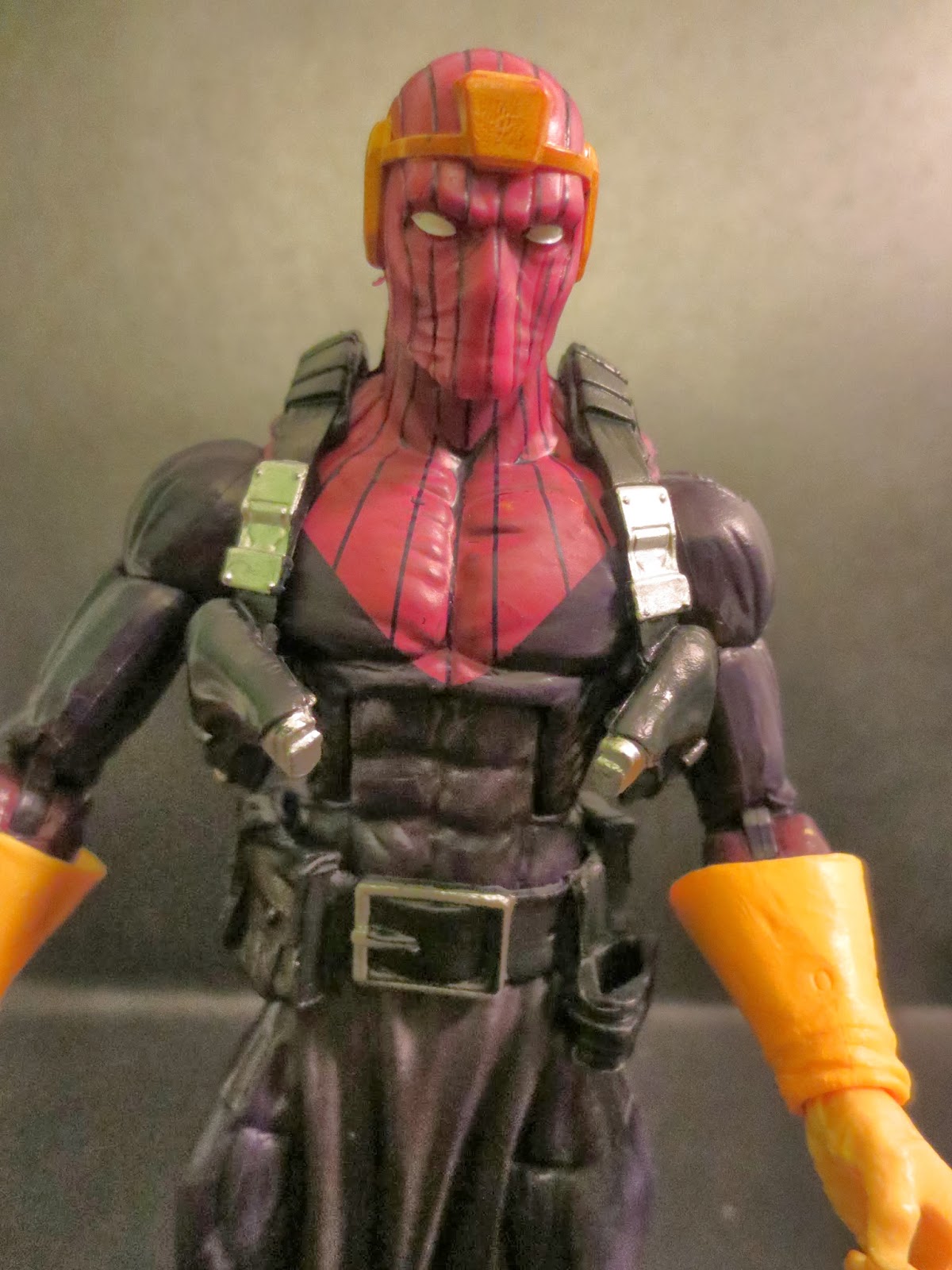 While many of the parts seem to be reused (I couldn't tell you from where exactly) they work. The body is a pretty standard body that many characters seem to share. It's got great musculature and works well for costumed fighters. The boots and gloves are really wide at the cuffs and have a very flamboyant look to them. Since this due goes by the title of Baron and wears a fairly colorful costume (not to mention that he has a leopard print gun) I don't get the fact that subtlety is his strong suit. He rocks and he knows it. I love the head. He's wearing a full balaclava type mask along with what appears to be a crown of some sort. Once again, it's an unusual look but I like it. You can see the subtle shape of his face underneath. His skirt is a separate piece that is attached to his belt and features four pouches as well as a loop to hold his sword. It doesn't appear to be removable, although his shoulder holsters are. Each holster has a pistol molded into it and the letter "Z" on the case. Hasbro did a great job here of dressing up a fairly standard body into something unique and exciting. 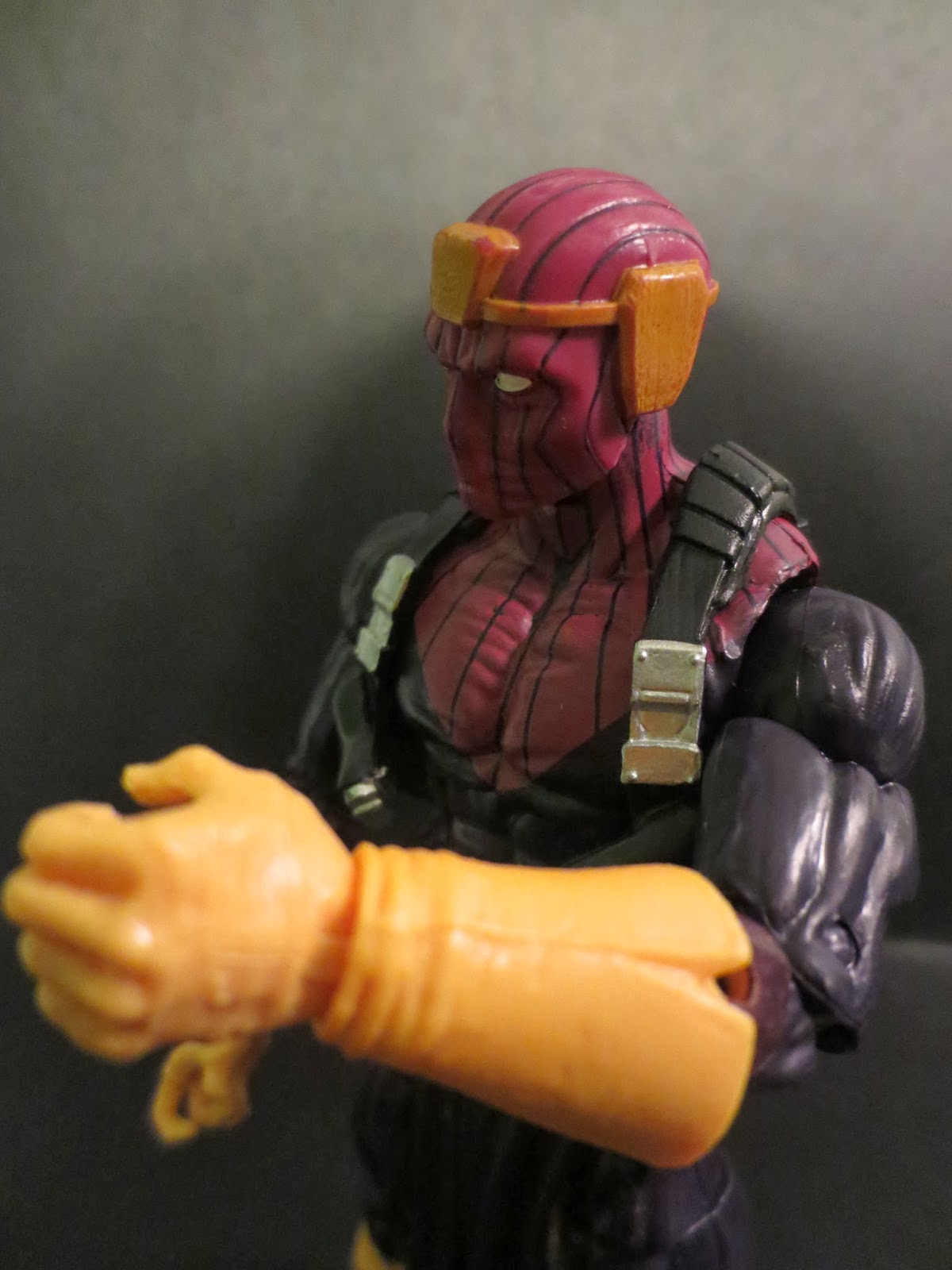 The color scheme on Baron Zemo's costume might sound like it'd be whatever the visual equivalent of nails on a chalk board is, but in execution it looks pretty good. He's got a mostly purple body suit with a much more vibrant purple mask. There are black lines on the mask that look decent, although they do have some imperfections when you look closely. The yellows of his crown, gloves, and boots look good; there is actually some nice, subtle orange shading on the gloves and boots. The fine details like the "Z" on each holster and the belt buckle aren't neglected, but they are a bit messy. The belt buckle on the figure I'm reviewing is a tad bit messy. Nothing deal breaking, but nothing that's going to win awards or anything. 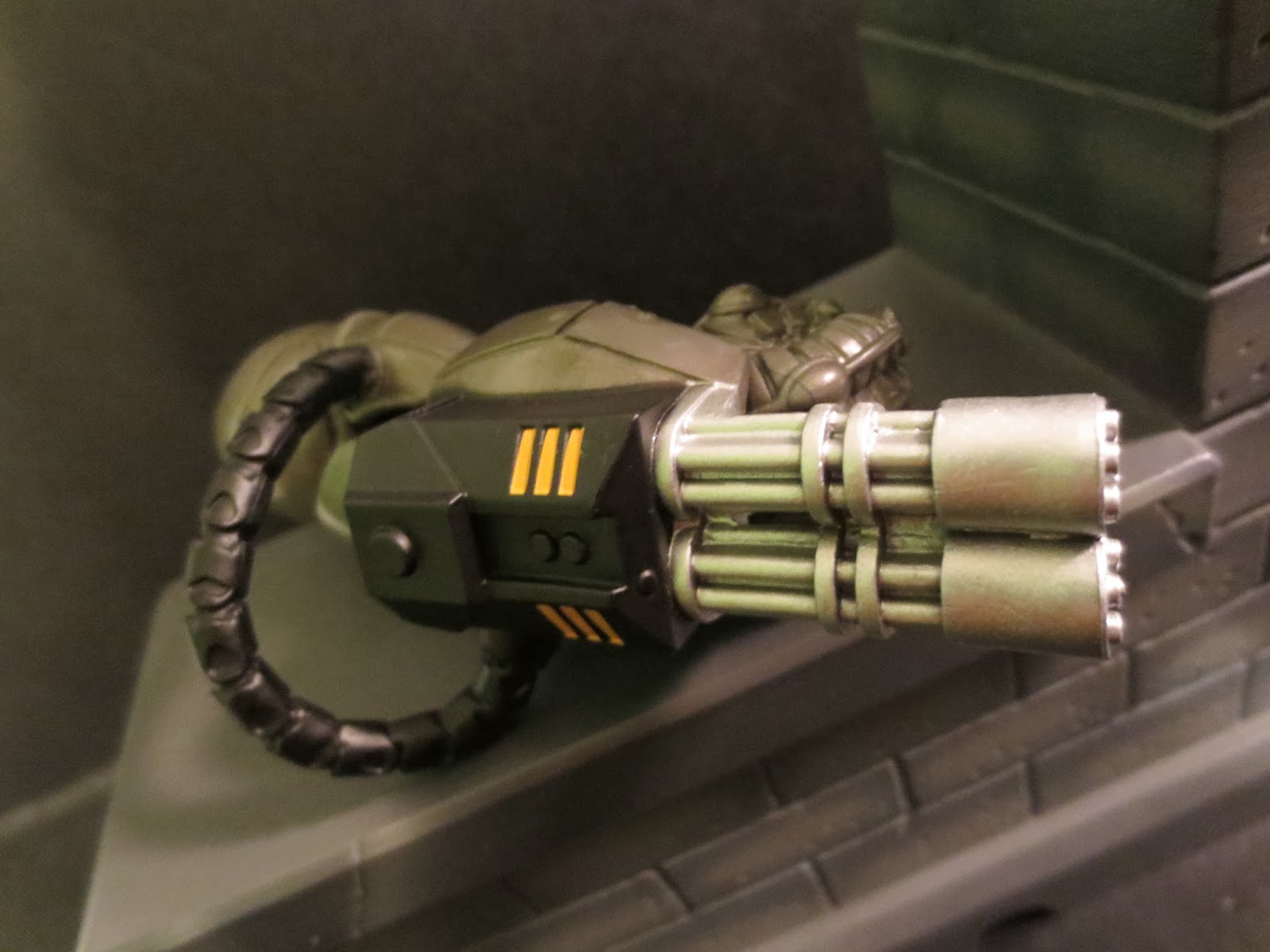 As I mentioned, Baron Zemo's shoulder holster rig is removable. It's incredibly easy and could be utilized on any number of figures which is always a cool feature. He also comes with the right arm of Mandroid which features two massive Gatling guns on it. I really want this guy, so I think I'll end up taking Brad's extra parts, buy Black Widow and the Winter Soldier himself, and then try to trade for the various Cap parts. I imagine those will be easier to come by. 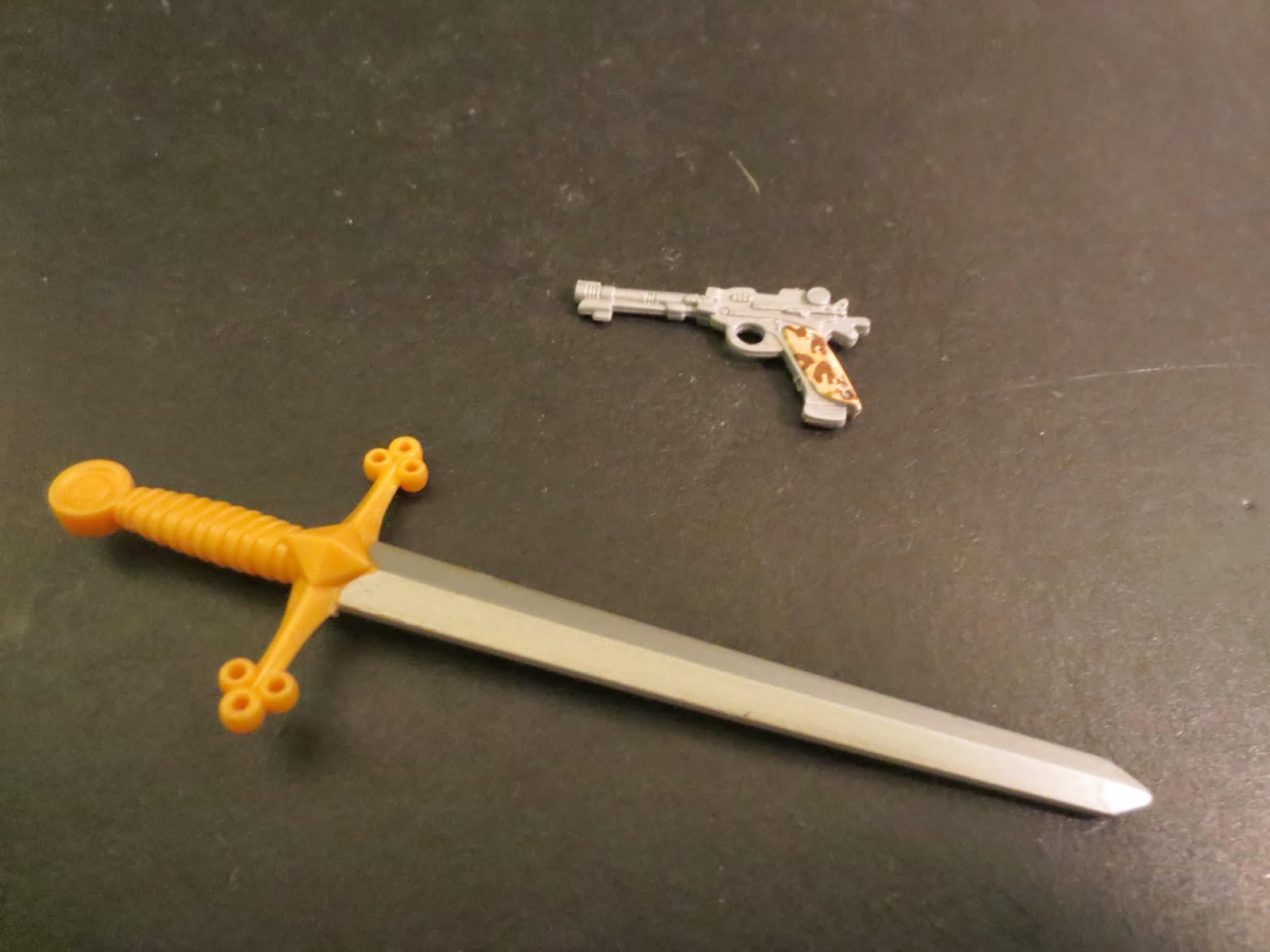 As far as weapons that he can actually hold, Baron Zemo comes with a pistol and a sword. The sword is a nice broadsword with a very ornate hilt and a nice, metallic looking blade. It is a little difficult to do, but it can be slid into the loop on Zemo's belt for storage. Completely impractical, but it looks fine when he's just on display. The pistol, however, is the winner here. We've seen this pistol before; it came with the Mystique figure from a year or so ago, but it's still a great sculpt that walks the fine line between comic book extravagance and a real world aesthetic. It also has a leopard print paint job on the grip! I love that! I didn't know much about this Baron Zemo guy before, but now I'm really curious to learn more. Seriously, a crossover with this guy and Pimp Daddy Destro would be amazing! 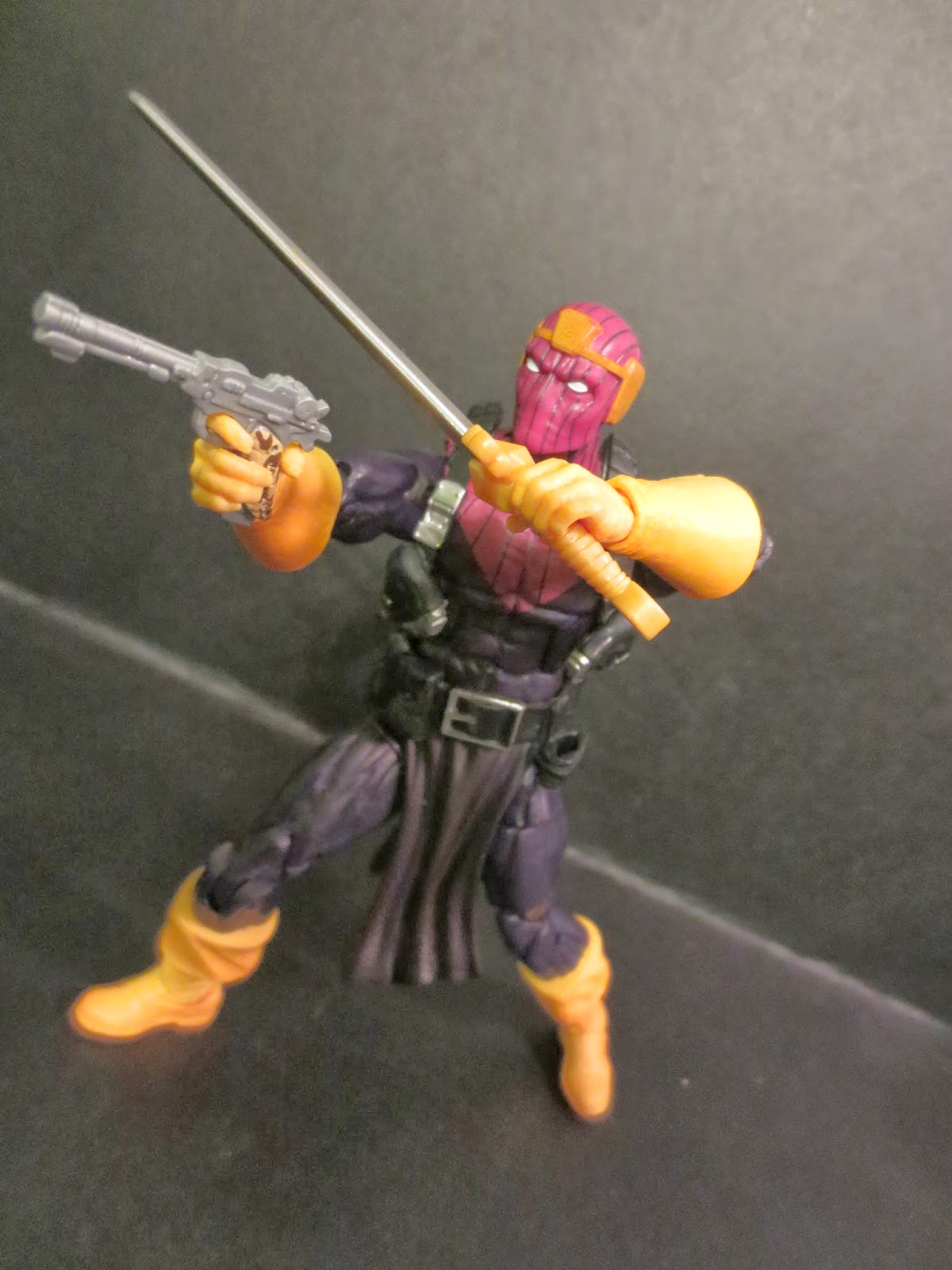 From what I can tell, Baron Zemo has no connection to A.I.M., so it's strange that he was made a variant of the A.I.M. Trooper and titled "Soldiers of A.I.M." Still, the figure is good and fits in with the Captain America themes wave, so no worries here, right? Zemo has some fantastic articulation, a good sculpt that manages to find ways to differentiate a pretty standard body, and some fun accessories. Yeah, his paint work is spotty at times, but that isn't a major issue. Overall, I'd give ol' BZ a Great rating. He's really fun and definitely the best figure in the new Marvel Legends Infinities lines that I've seen yet (although I have yet to see them all- Black Cat and Black Widow both look awesome). 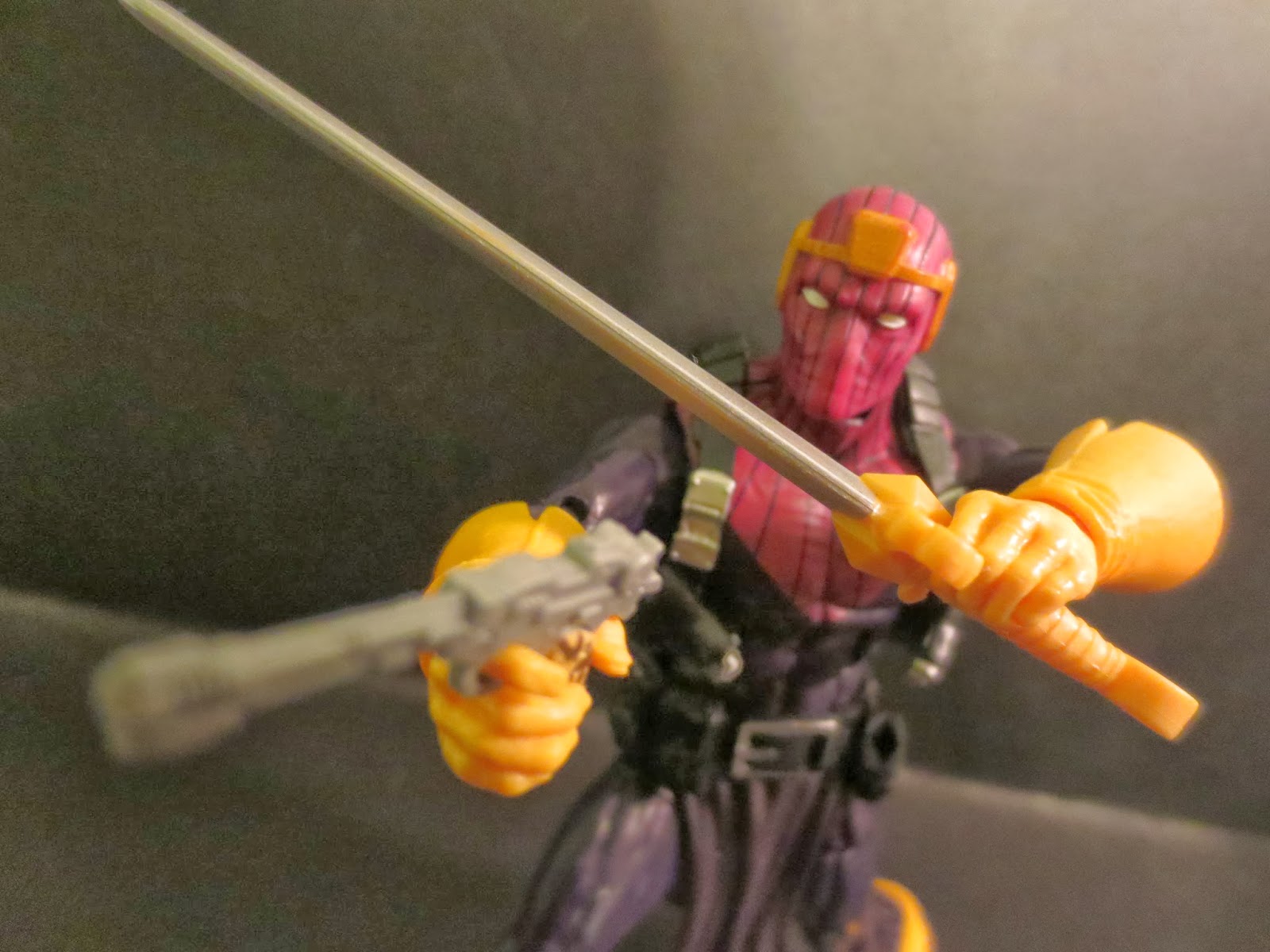 If you're trying to track down Baron Zemo, Big Bad Toy Store has a number of options. Whether you want a full case of figures, or a smaller set of five with Zemo, Black Widow, and Red Skull, they've got you covered. Also, check out our review of other Marvel Legends figures: