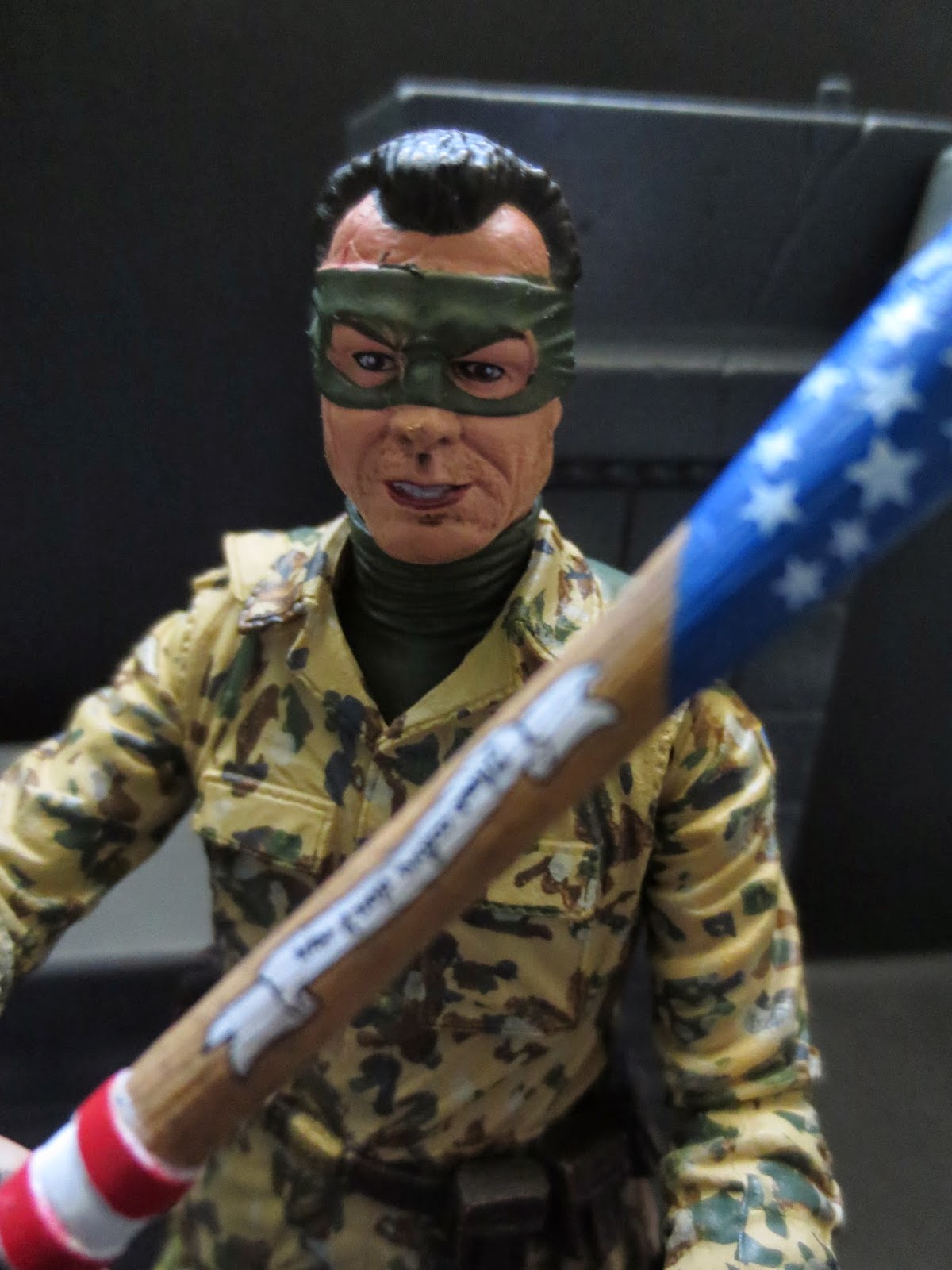 I actually haven't seen Kick-Ass 2 yet, and even if you haven't either you are probably still familiar with this character from both the trailers for the film and the various news stories where Jim Carrey pulled his support of the film less than a month before it was released because of the film's violence. Colonel Stars and Stripes is played by Carrey and is the leader of the team Justice Forever. In the comics there were actually two characters, Colonel Stars and, his brother, Lieutenant Stripes, but the film chose to combine the characters. Together with his German Shepard, Eisenhower, Colonel Stars and Stripes is ready to dish out some American justice on any baddies. Ready for a look at this cool new figure from NECA's second series of Kick-Ass 2 action figures? Then join me after the break.... 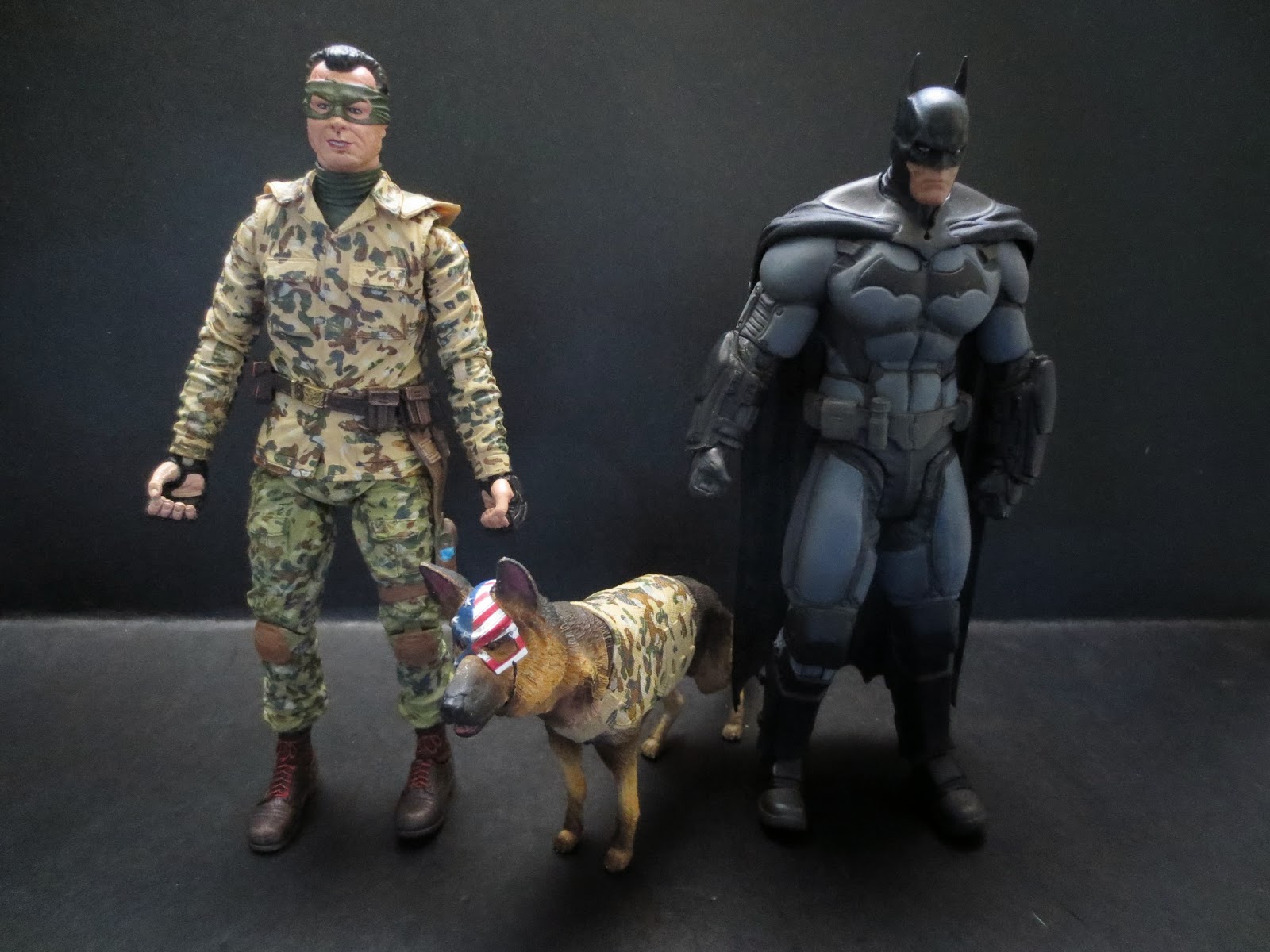 Colonel Stars and Stripes is right around 7 1/4 inches tall. Since I don't own any of the other Kick-Ass 2 figures, I'm not sure how the scale is compared to them, but when you compare him with other NECA movie based figures released under their Reel Toys banner you'll notice that he's quite a bit taller than most of them. He's about the same height as Ivan Drago from Rocky and a good quarter inch taller than Dutch from Predator. In real life, both Carrey and Schwarzenegger are 6' 2", so my guess is that NECA made the Kick-Ass and Hit Girl figures a tad taller than they should be and had to upscale this guy a bit to fit in. Let it be noted that there is a variant of this figure with his hood up. They seem to be randomly inserted as many online stores say they can't guarantee which version you'll get. 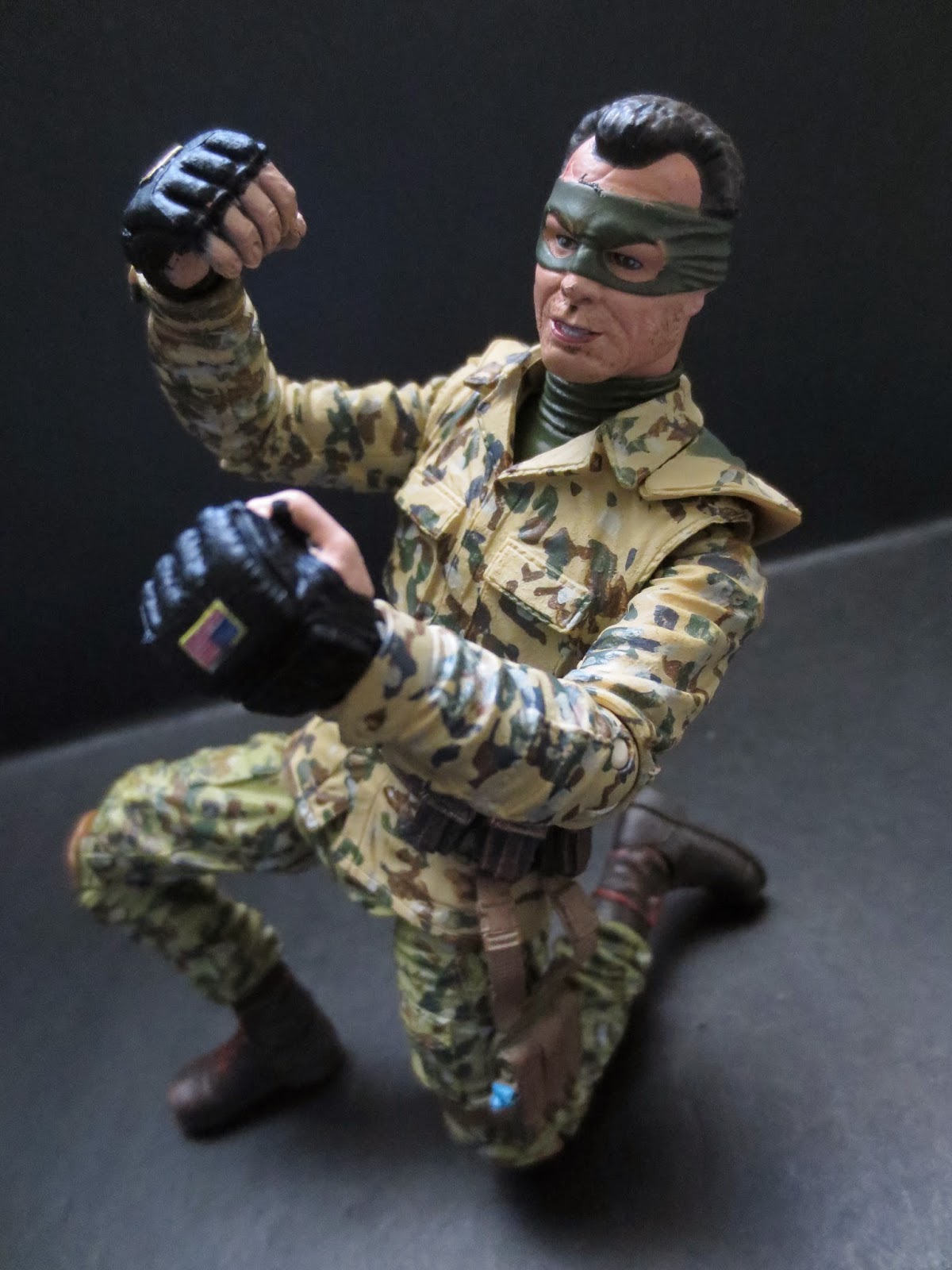 While Colonel Stars and Stripes doesn't have all of the articulation that Dutch or the Colonial Marines from Aliens have, he is still pretty well articulated. He features: ball jointed ankles, double hinged knees, swivel thighs, swivel/ hinge hips, swivel/hinge shoulders, swivel/ hinge elbows, swivel/hinge wrists, and a ball jointed head. While a midtorso ball joint would have been nice, the Colonel can still get into plenty of great poses to knock the bad guys around with his axe handle, Betsy Ross. I love how the hips are constructed; in fact, most of the articulation is really non-intrusive and doesn't hurt the sculpt in the least. 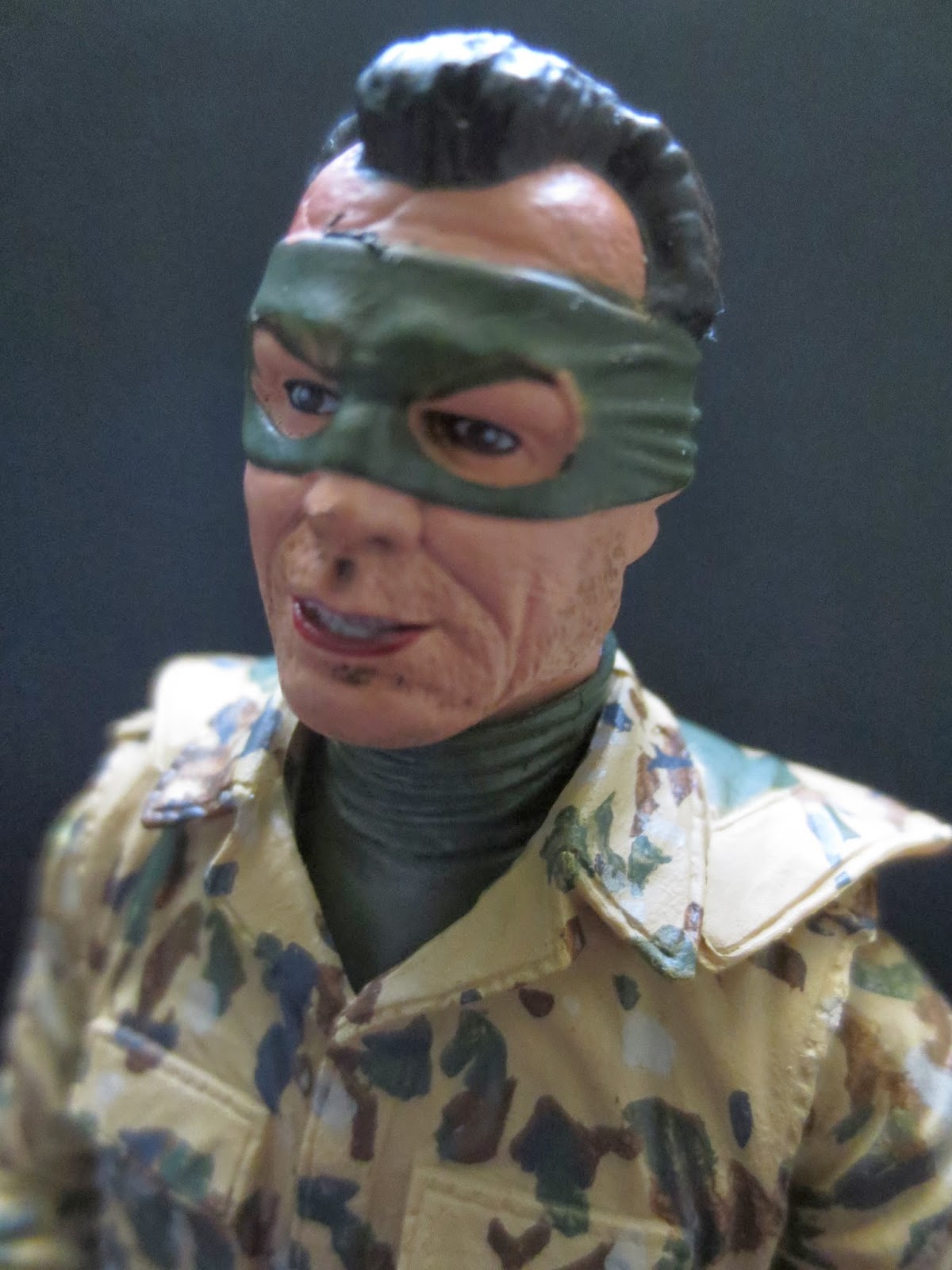 The sculpt is a part of this figure where I've got some real criticism, so I'm going to jump in and do the ol' compliment sandwich. First, let me say that the body of this figure is awesome. The jacket and the pants are really, really well done. Not only are there lots of great folds and wrinkles, but you can even see the seams on the pockets if you look closely. NECA always nails this kind of work so this isn't a surprise, but it still deserves recognition. OK, now here comes the beef: the headsculpt looks to have really suffered from prototype to final product. Jim Carrey has always been know for his ability to create characters and impersonate people with his face, but I thought his look for Colonel Stars and Stripes was just brilliant. This headsculpt, however, is just way too soft looking. I can see the character, but the proportions of the face look off to me. Rather than Carrey's thinner jawline, this figure looks swollen up like he just had dental surgery. Usually NECA nails likenesses, but I'm going to have to chalk this one up as a miss. To round out the compliment sandwich, though, let me say that the smaller details such as the stars on his padded gloves and the belt buckle on his utility belt are just excellent examples of the crisp, micro details that just point to the quality NECA puts into capturing their subject matter. 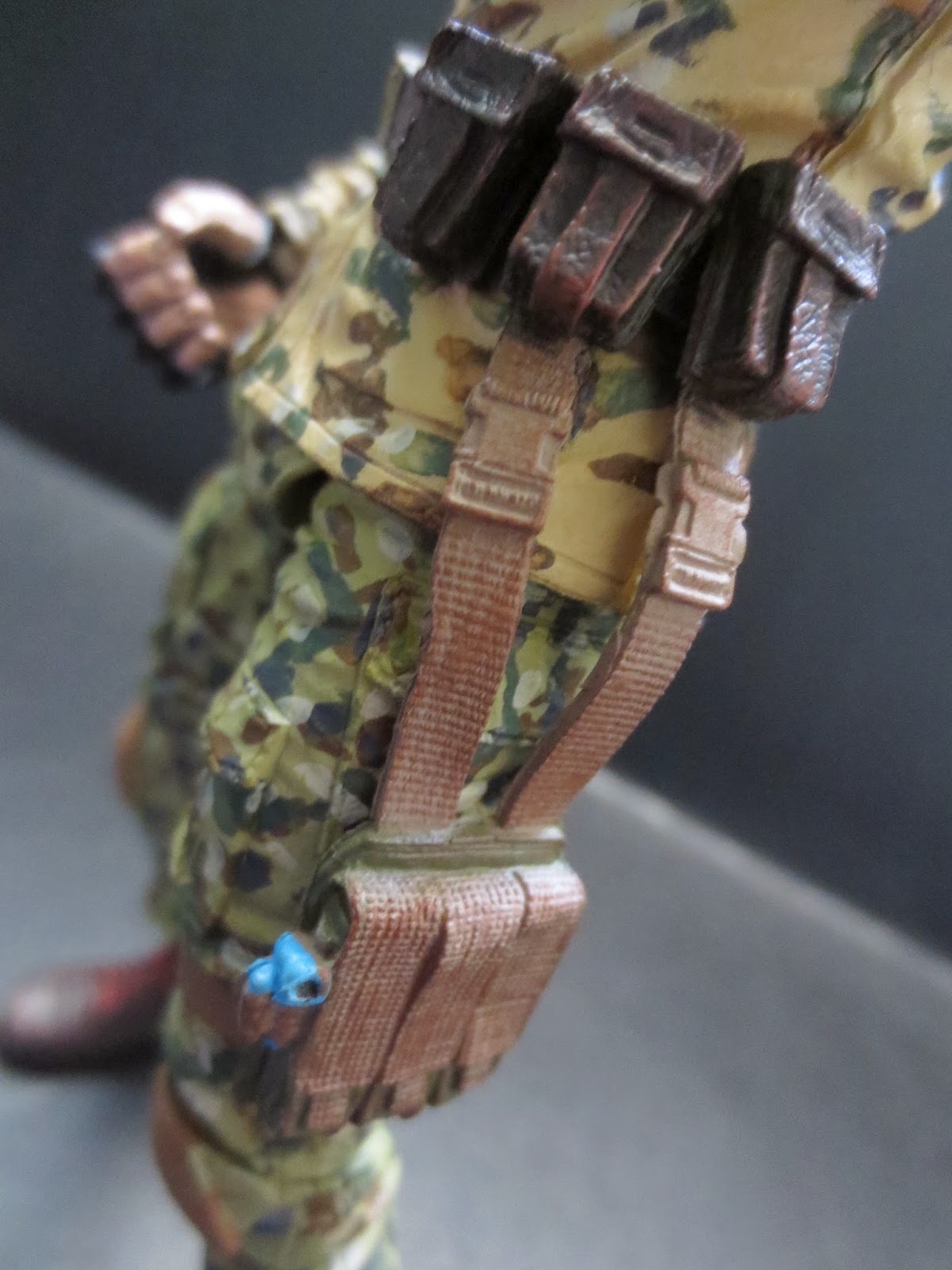 Once again, my views on the paint pretty much echo my views on the sculpt; the body is fantastic while the head has some issues. With the headsculpt, the problem isn't really with the technical details of the paint work as it is with some stylistic choices. Once again, look back at that picture of Carrey: the character has a lot of gray hair while this guy doesn't. He just doesn't look gray and grizzled enough, which I expect might go further towards making the likeness seem off. His uniform is awesome, though, with a great desert themed camouflage pattern that perfectly matches the film costume. Small details like the American flags on his shoulders and on his knuckles and the red laces on his boots are neat and clean. The details on his belt such as all the small pouches and the magazine holder on his left hip also look great with some nice shading and drybrushing to give them suitably realistic finishes. 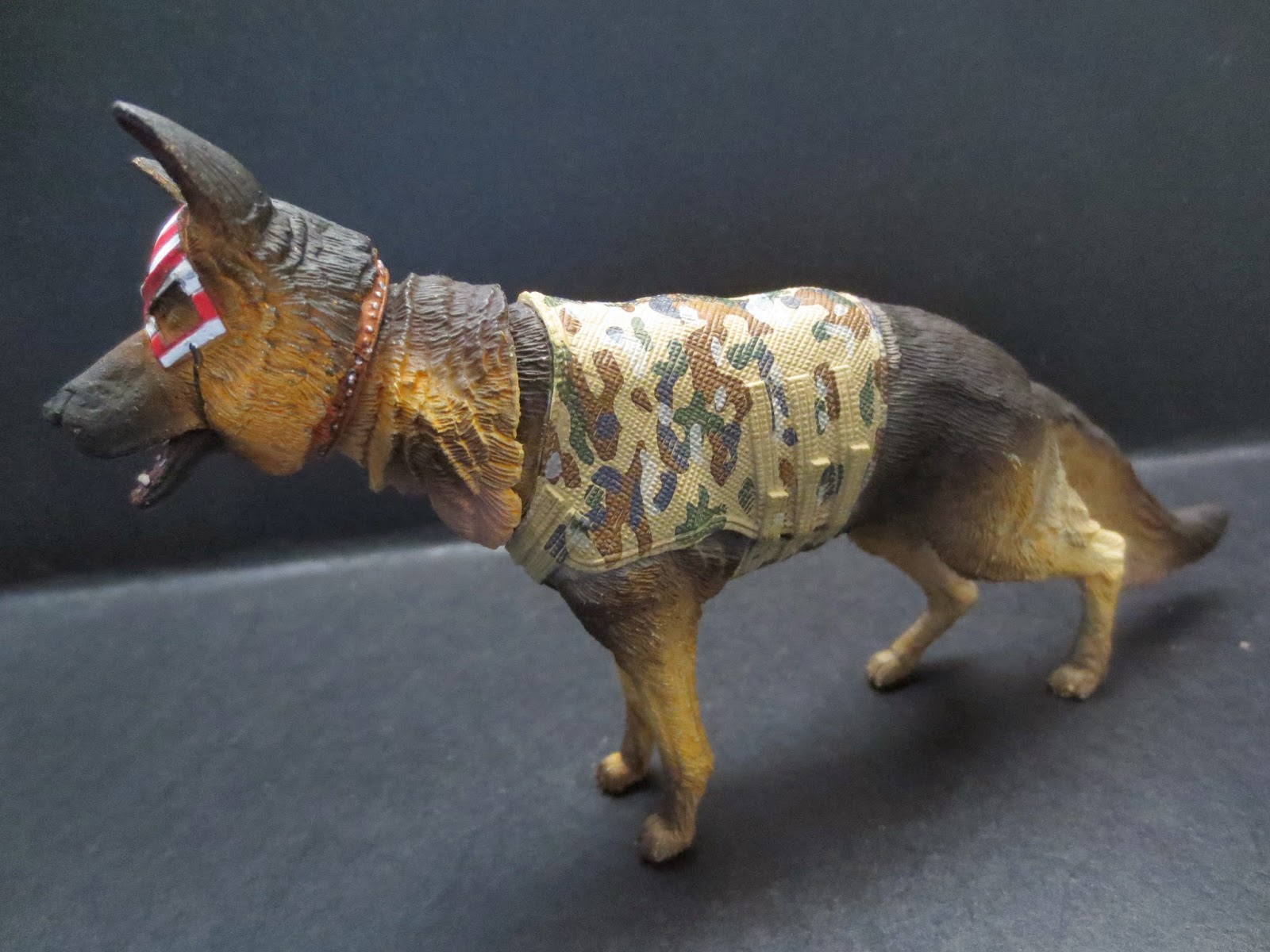 As a kid, I always went first for the G.I. Joe characters that came with a dog. I've always loved dogs (I have three dogs myself) and think they not only make great pets but also great accessories for action figures. All that goes to say that the good Colonel is joined by his companion, Eisenhower. Eisenhower is a massive German shepherd that is just a gorgeous companion. He has a ball jointed neck and head as well as a hinged jaw. The paint is excellent, not only on Eisenhower's matching camouflage vest and red, white, and blue face mask, but all over his body. I've fostered a few German shepherds before (Hi Aayla and Eva!) and NECA just nailed their beautiful coats and stature in this piece. I love it! 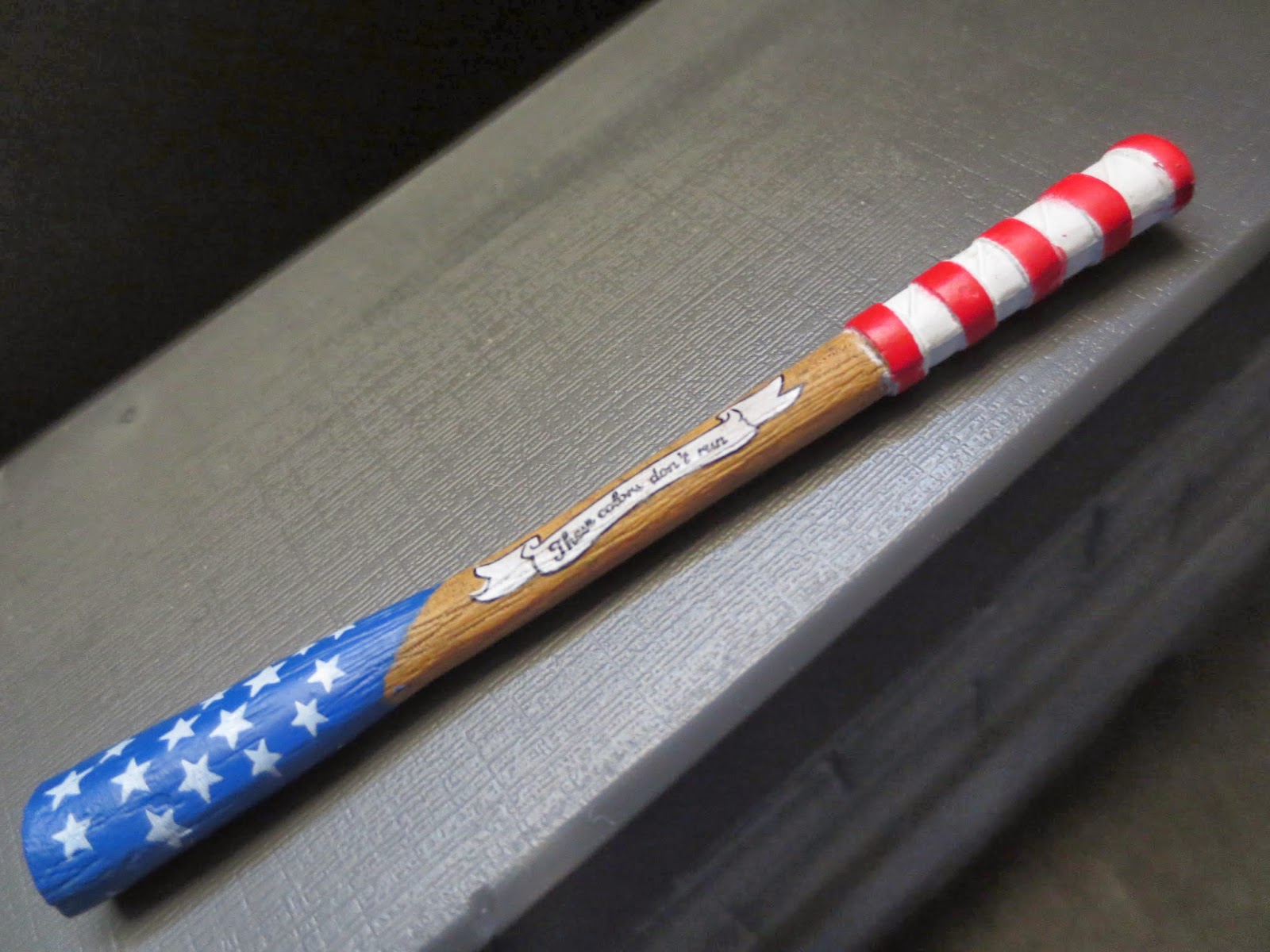 Secondly, NECA came with Colonel Stars and Stripes comes with his customized axe handle Betsy Ross. NECA actually made a prop replica of this for SDCC 2013 (which Michael Crawford reviewed), so you know that NECA knew what they were doing here. Overall, this thing looks awesome and has as many paint apps as most mass market action figures. Little details like the eagle on the base of the weapon and the wood grain texture are all present. The only complaint I have is that the writing on the banner on both sides reads: "These colors don't run." It's supposed to only say that on one side while the other side says "Hey ho let's go." Weird, but not a deal breaker. Great accessories all around for this guy, though. A dog and a customized whomping stick? What else do you need to take a bite out of crime? 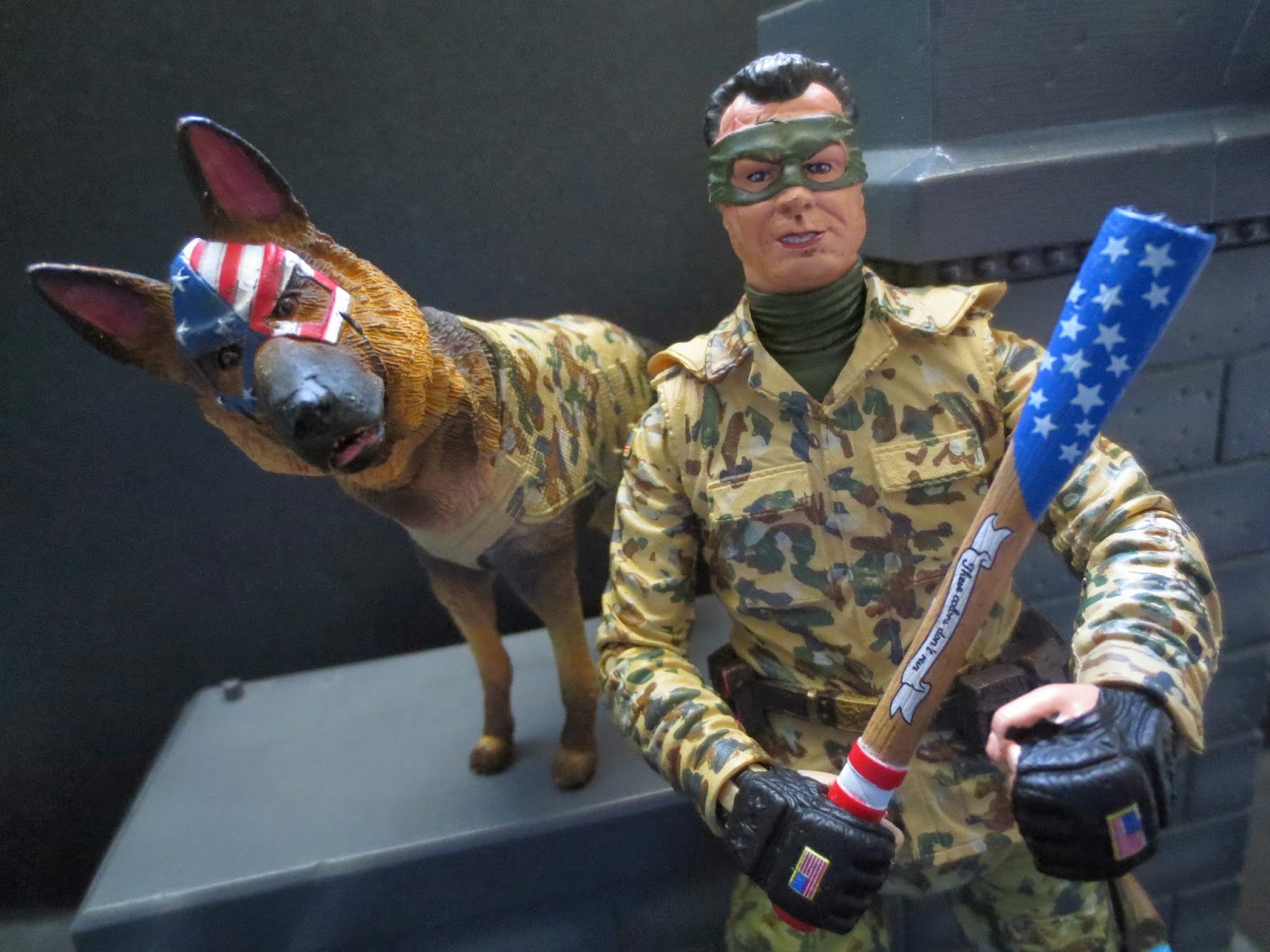 This is the only figure from Kick-Ass 2 I've had my hands on, but I'm impressed. I might have to track some of these down, even though I haven't seen the film, just because of the great work NECA has done here. I always find that to be the hallmark of a great company: regardless of the license or the character, you're always excited to see and appreciate their work. While the headsculpt looks like it might have suffered in production, Colonel Stars and Stripes is still not a bad looking figure. His outfit and accessories are completely amazing and I have a feeling that some fans might find the body useful in constructing their own custom Colonial Marines and soldiers from Aliens and Predator. Overall, I'm giving Colonel Stars and Stripes a Great and a 1/2. Had the headsculpt been a bit better and the scale been more in line with most other NECA Reel Toys, I could easily see giving this guy an Epic rating. It's those kinds of issues, though, that separate Great from Epic. 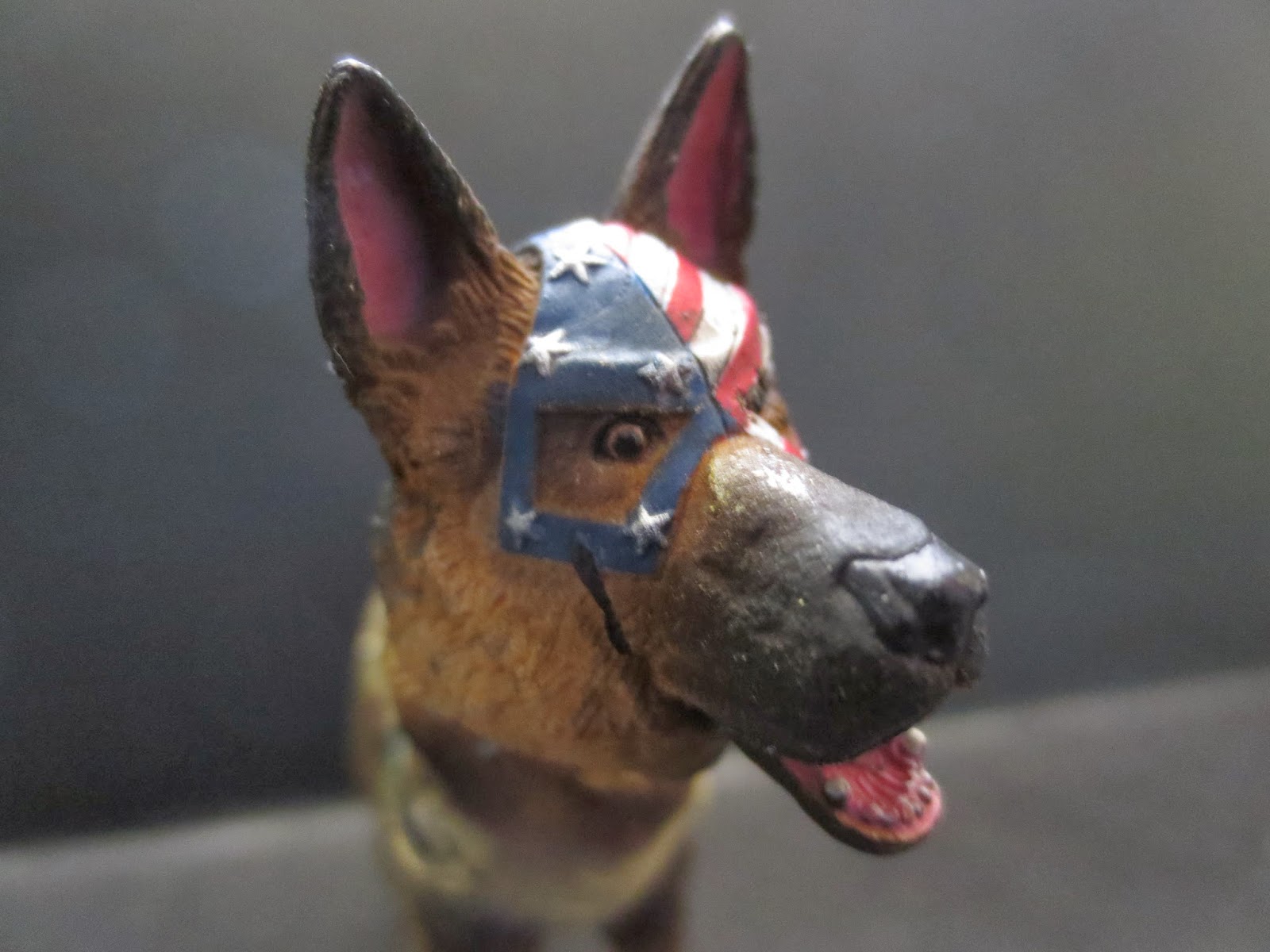