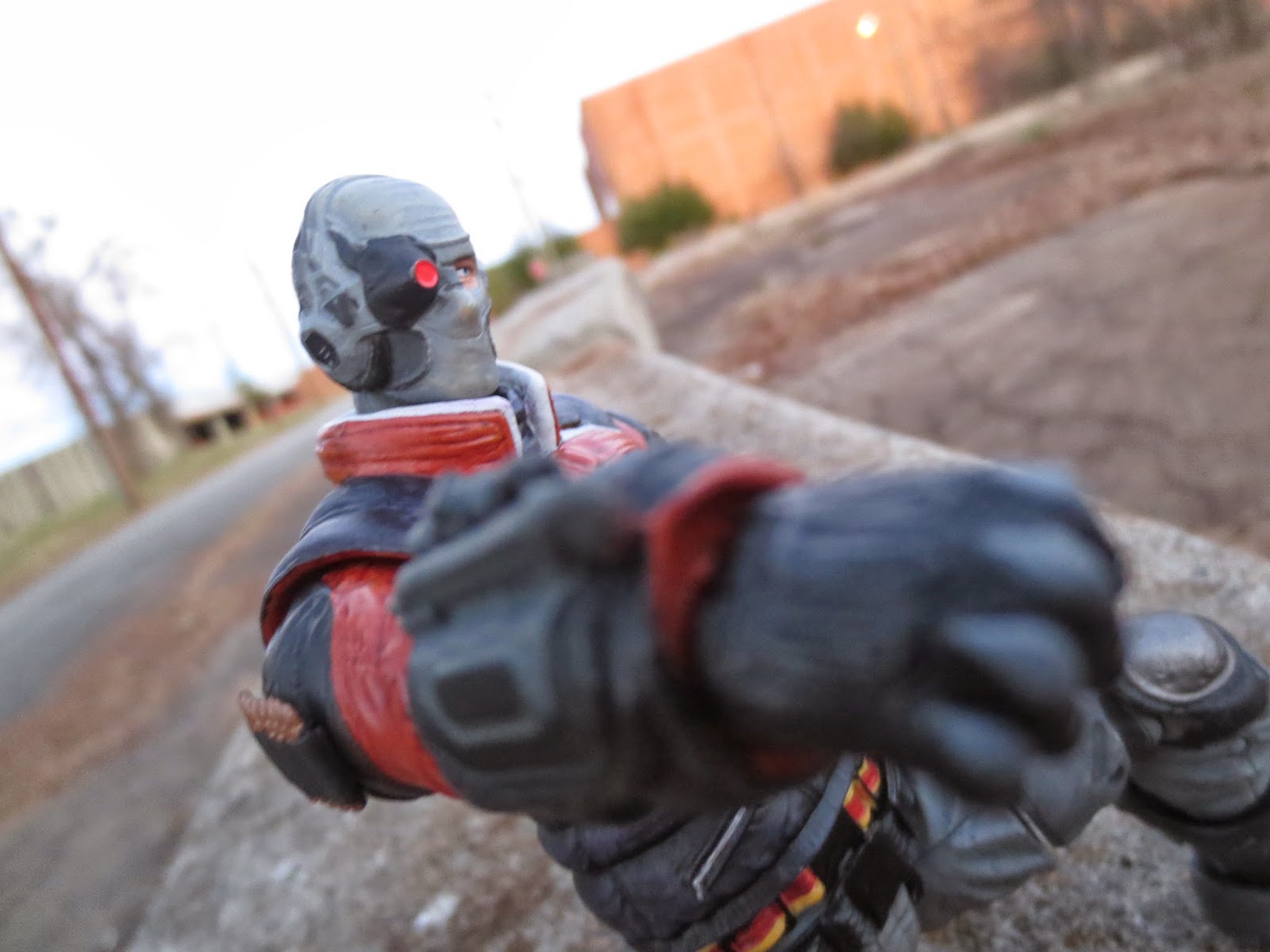 Let's hope that this is just a fluke and not a sign that DC Collectibles is having widespread quality control issues again, but the left arm of my Deadshot figure was completely snapped off at the shoulder in the package. As some of you might remember from last year, I had some major breakage issues with both my Talia al Ghul and Deadshot figures from Arkham City series four as well as the Arkham Asylum Killer Croc arm breakage that nearly everyone had. Fortunately, later last year I was convinced that DC Collectibles had gotten QC under control and I ended up purchasing many of their products. They have lots of stuff that I'm looking forward to this year as well, so the fact that a breakage issue popped up again definitely concerns me a bit. Granted, I've now reviewed all of Arkham Origins series four and Deadshot is the only problematic figure I've encountered (other than Deathstroke's sword) so let's hope that this is just a fluke. I have a replacement figure on the way from Big Bad Toy Store, so I'll post an update when he arrives. Ready for a closer look at Deadshot here? Then join me after the break.... 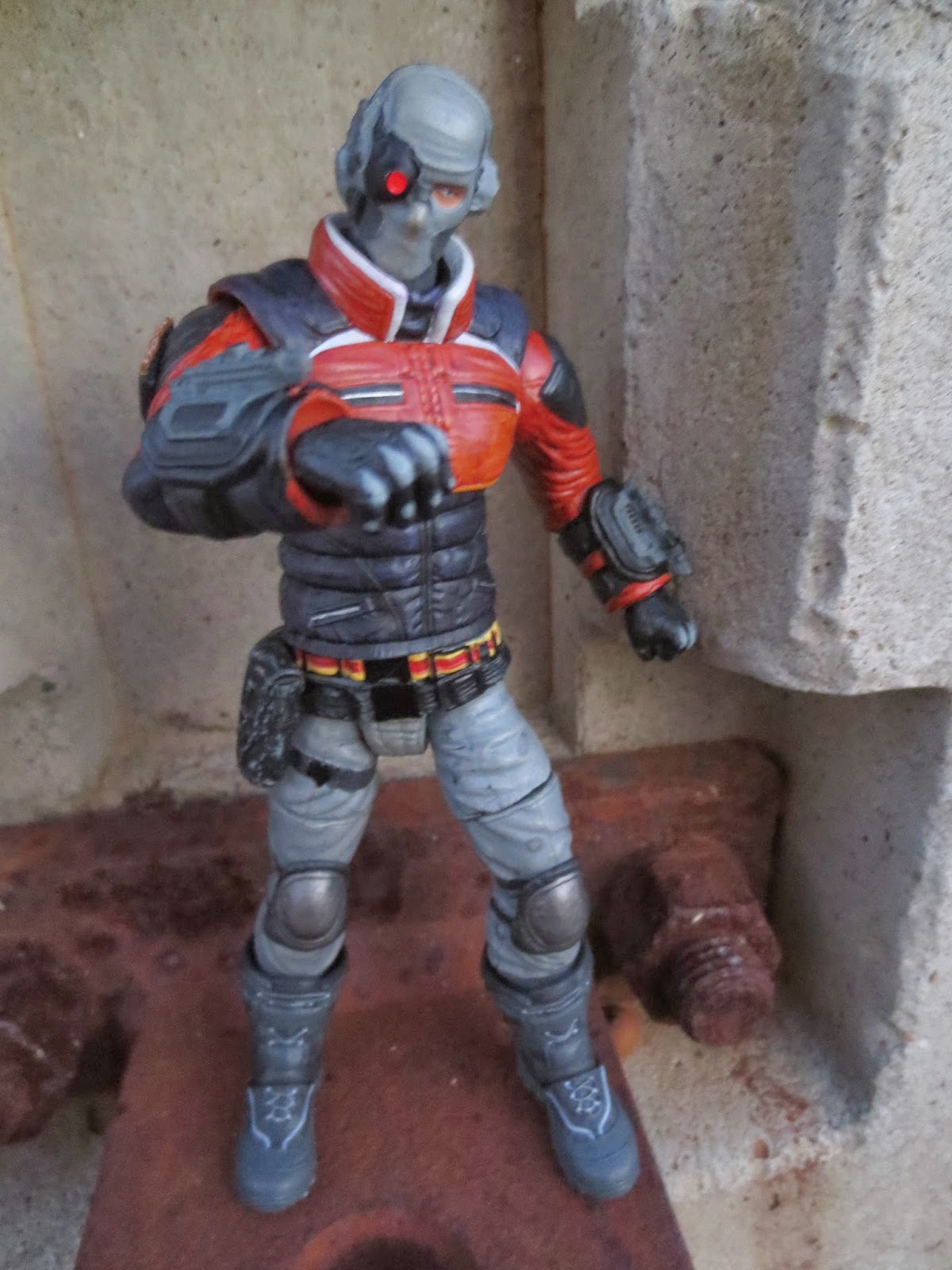 Like his fellow Arkham Origins figures Deadshot stands around 7 inches tall. He comes in the same easy to open clam shell packaging as the other basic figures and has the same video game based style that looks like something halfway between a realistic sculpt and a comic inspired sculpt. There have been a few different Deadshot figures offered lately including the New 52 styled Suicide Squad Deadshot, last year's Arkham City styled Deadshot, and Mattel's DC Multiverse Deadshot which is this same look but in the 1/18th scale. 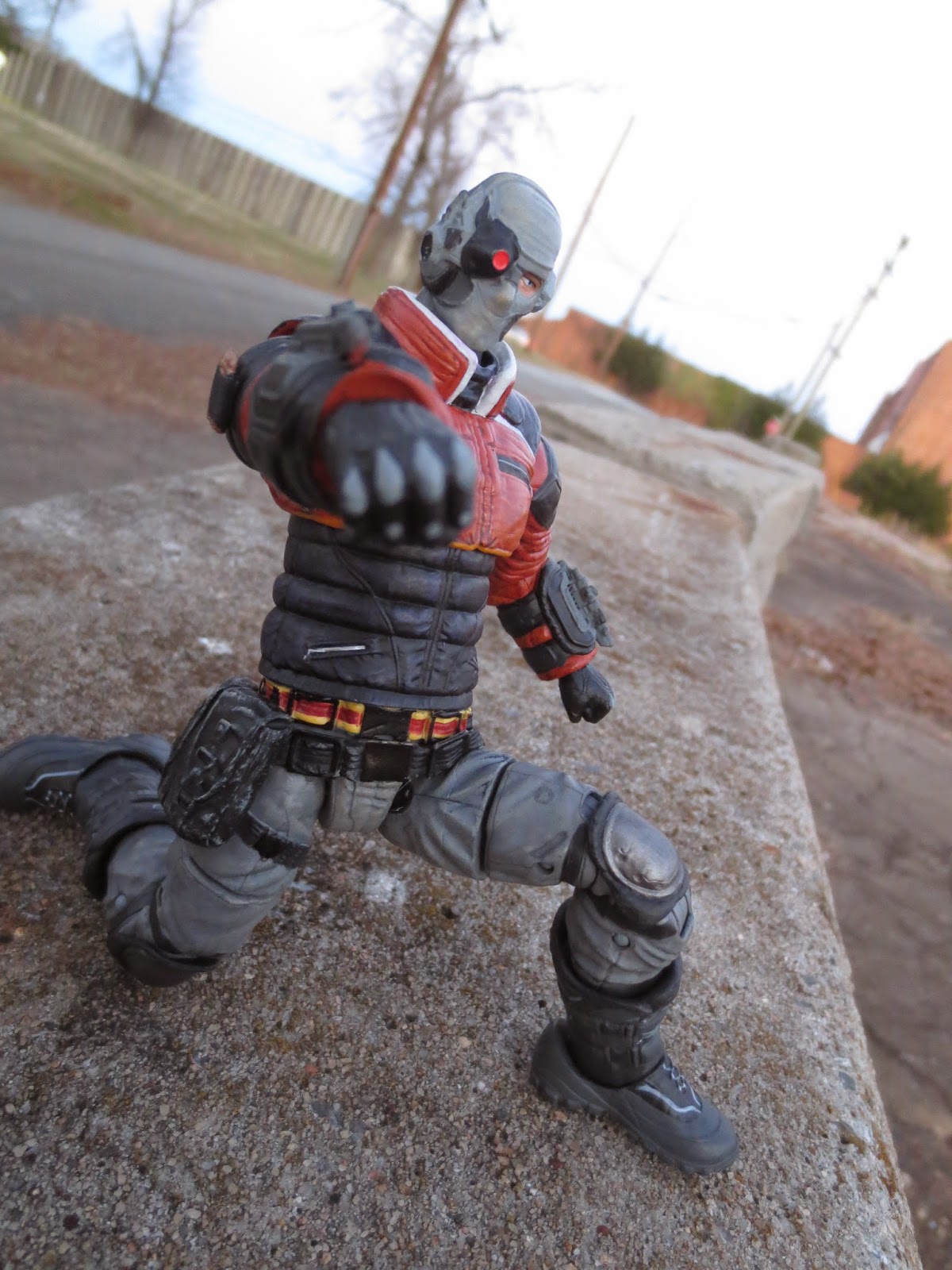 
Looking at the left arm, it appears that the actual shoulder peg is made from clear plastic. I'm not sure why DC Collectibles uses clear plastic for the joints because it seems to be notorious amongst action figure collectors for being more brittle. Since the arm joint snapped right out of the package (and I have a replacement coming) I decided to put the rest of the figure through much more rigorous play testing than I typically do. I'm happy to say that nothing else seemed the least bit fragile. Upon closer inspection I'm quite confident that the problem is probably more attributable to the hinge/disc on the shoulder being fused rather than the materials of the peg itself. Anyways, I'm quite disappointed but I'm getting the impression this is more of a one off problem than a genuine widespread quality control issue. 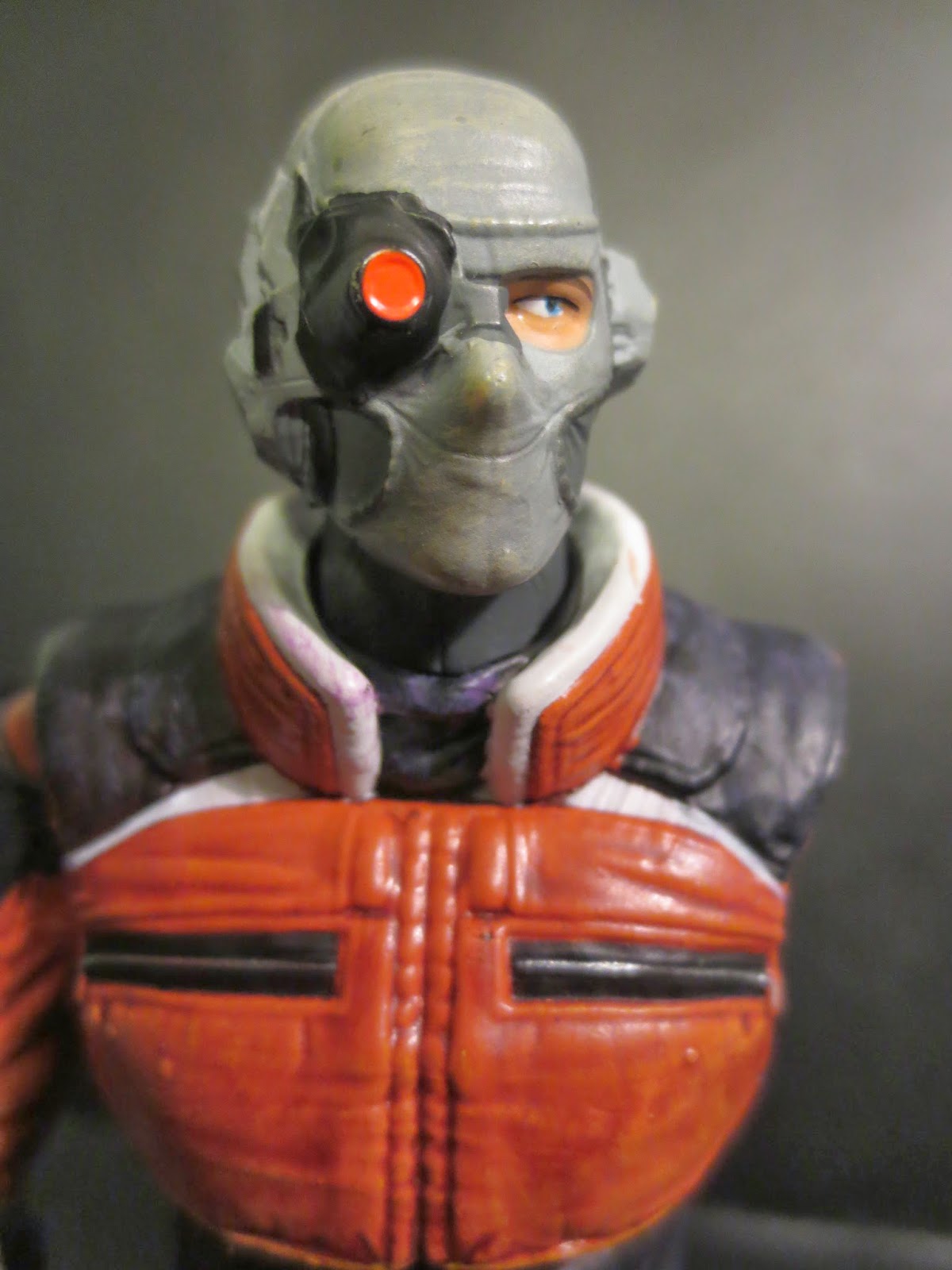 It's a shame this guy broke because I absolutely love this figure. Both his appearance and the sculpted detail are all kinds of rad. I'm really impressed by how well DC Collectibles managed to convey the puffy, quilted nature of Deadshot's jacket. It looks fantastic and really does a great job of making this version of the character standout. Deadshot has a fairly cool headsculpt as well, although it kind of reminds me of Firefly from G.I. Joe. He's wearing a balaclava with padding on the sides, some headphones, and his eye-mounted targeting unit. I wish that the definition was a bit better on the headphones (and maybe the targeting unit, too), as they do appear a bit flat. Maybe the headphones should have been a separate piece? Various other little details cover the sculpt such as knee pads (the left one even has a few tents), extra padded boots, and a strip of eight bullets on the right shoulder, all of which help Deadshot's somewhat simple look stand out. 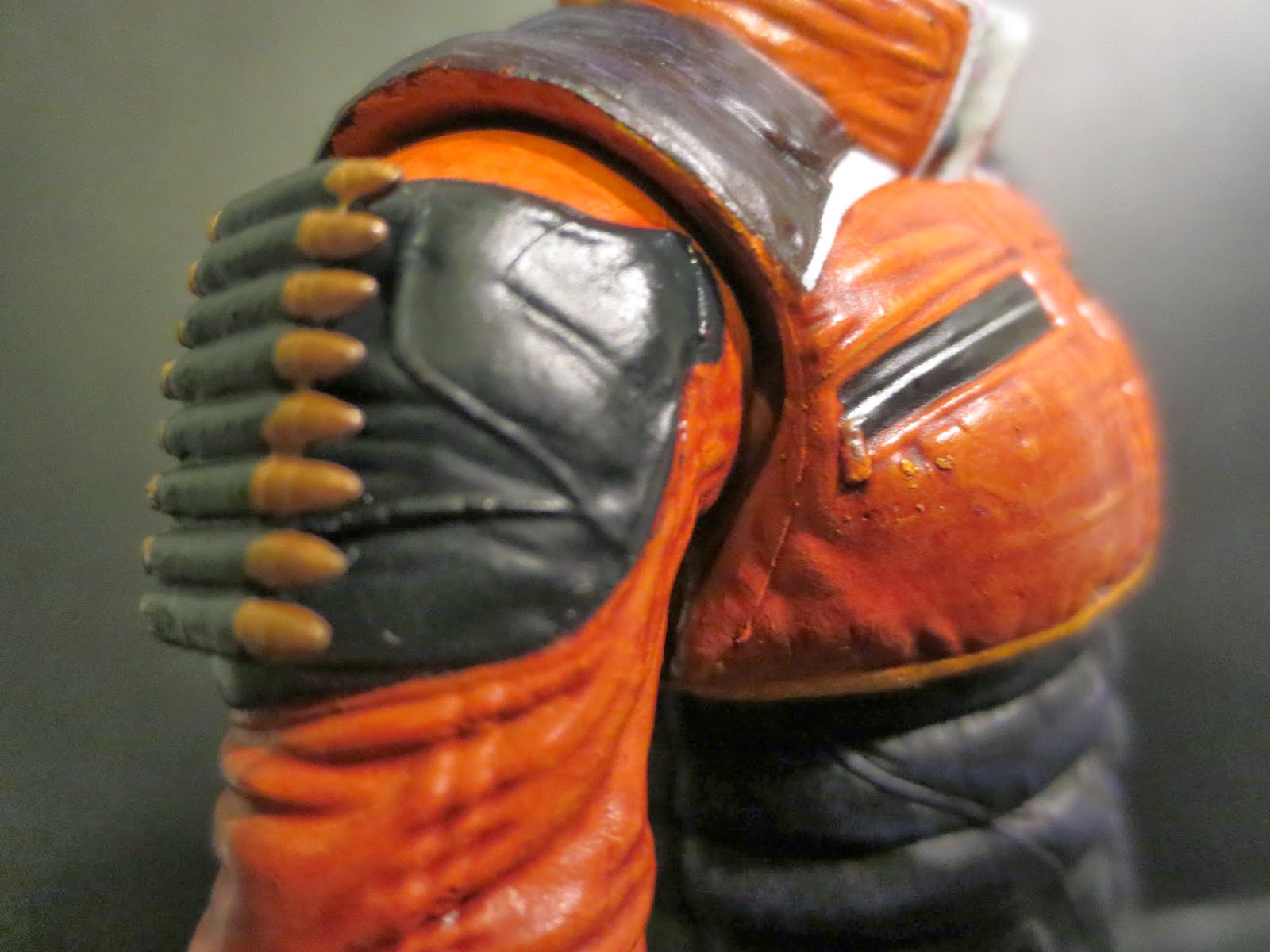 I really like Deadshot's color scheme. He's mostly gray and black, but the red of his jacket really breaks things up nicely and also serves as a throwback to his more classic costume. His jacket has a unique paint application that seems a bit thicker than usual, but I think it actually helps to make the jacket look like it's made from a thick material like you would see on certain ski jackets. The finer details like the zippers and white trim are pretty neat, although there is a bit of slop on the white collar trim. 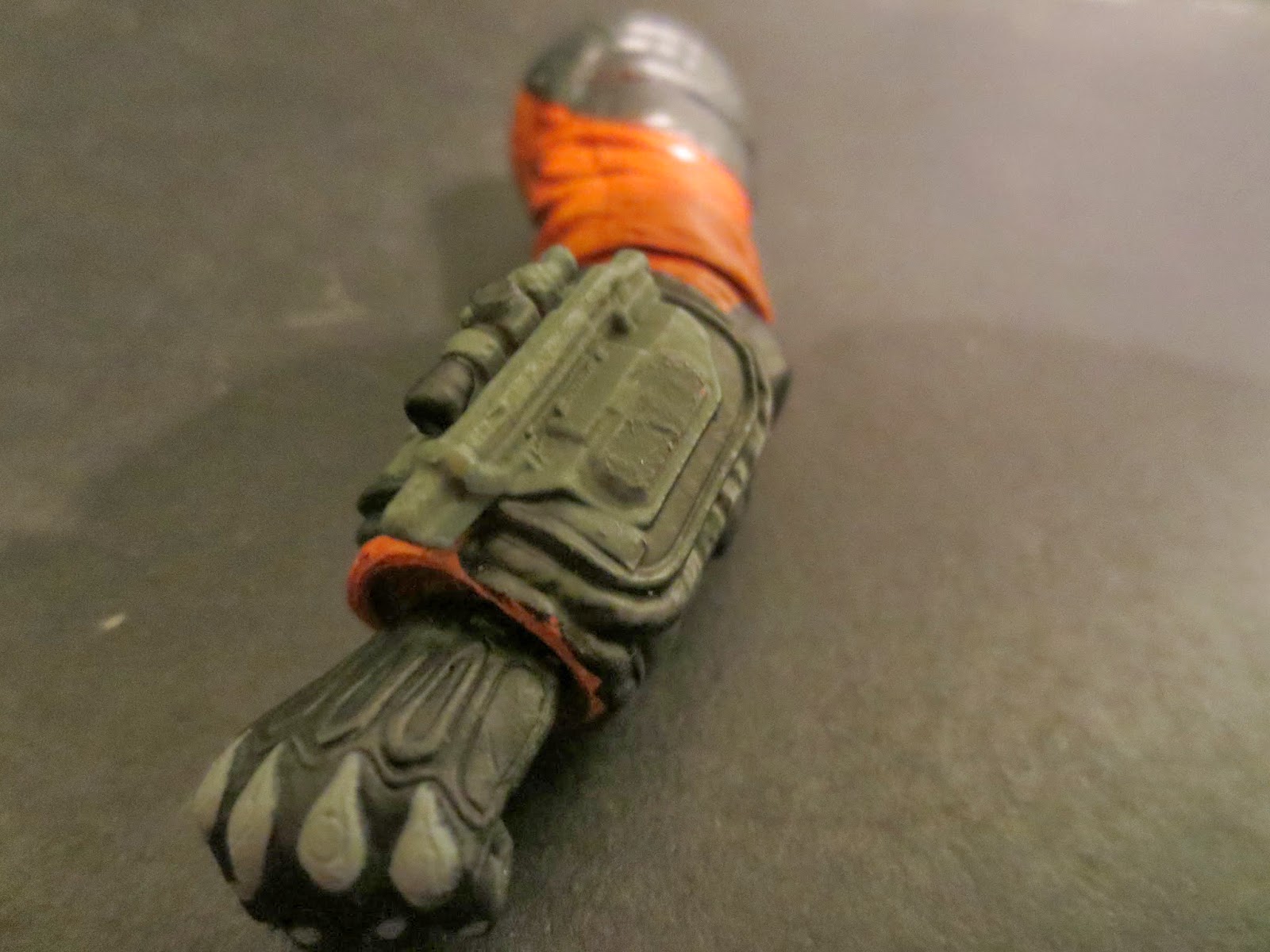 While Deadshot is armed with the two guns mounted on his wrists, they're not removable and are a permanent part of his sculpt. Perhaps it's because DC Collectibles didn't want to have to give Deadshot an openhanded sculpt (fists work much better with his wrist guns), but I think this sniper rifle would have been a neat inclusion. 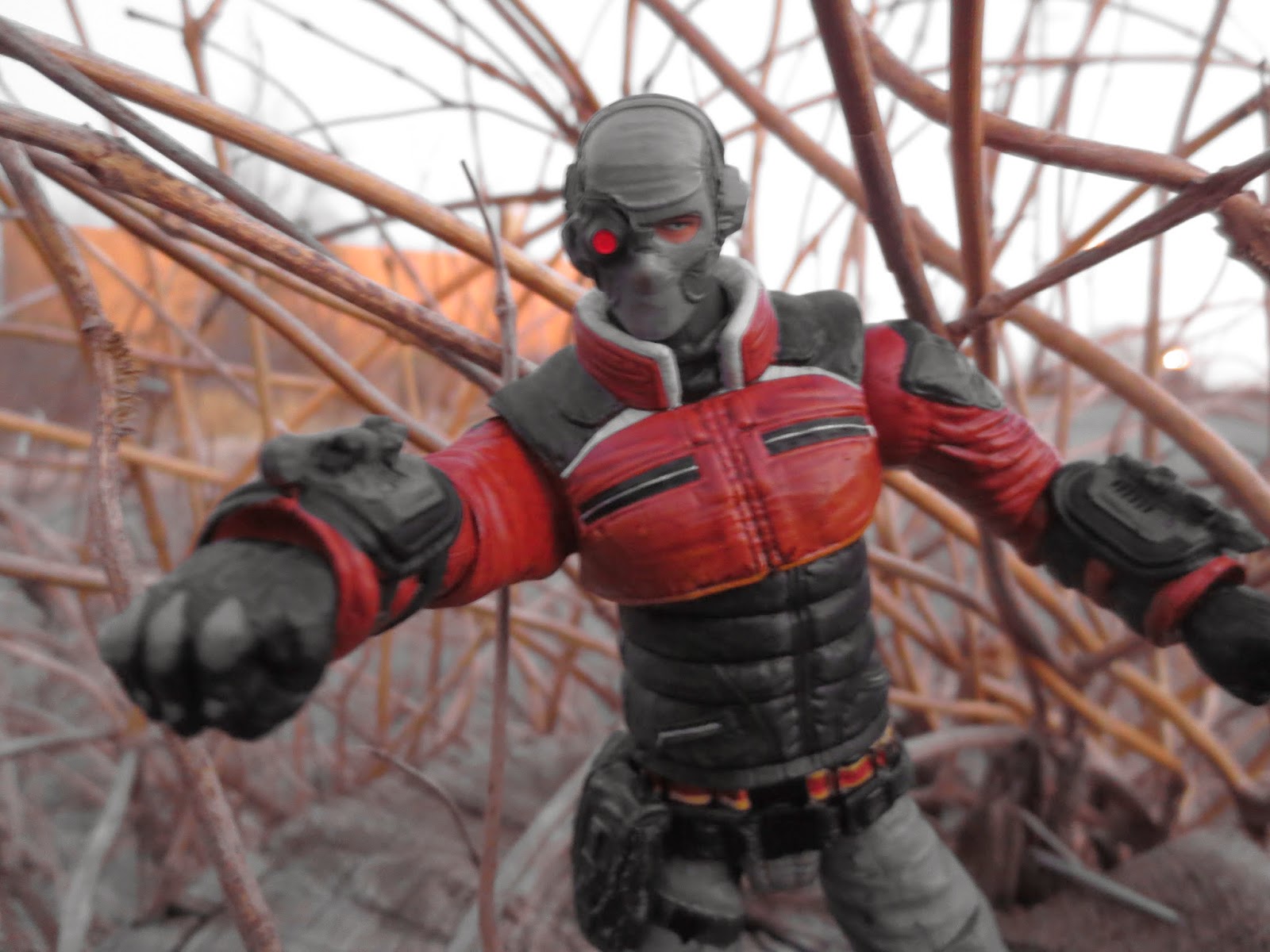 I'm really bummed this guy broke because he's quite awesome all around. He's got fantastic, well thought out articulation, excellent sculpting, and really incredible paintwork. I can kind of understand his lack of weapons, although pitching in something (even an extra gadget for Batman) would have been nice. Still, that broken arm definitely gives me flashbacks of last year's Arkham City series four when I had multiple breakages, sometimes even of my replacement figures. I really don't think that's the case here. I held this review off for a day in order to wait for my replacement figure from Big Bad Toy Store to come in but some severe weather apparently delayed his delivery another day. Once I get my replacement killer, I'll compare his articulation and QC and render a final verdict. For the meantime, however, I believe everything else still provides enough information for you to get an idea of what this version of Floyd Lawton has to offer.

*Update* So I did receive my replacement Deadshot and I've had no problems with him whatsoever. He seems great and very sturdy with any of the articulation problems. If I were giving ratings to my broken Deadshot he would have gotten a Crap and a 1/2, but my replacement figure easily gets a Great. Make of that what you will.* 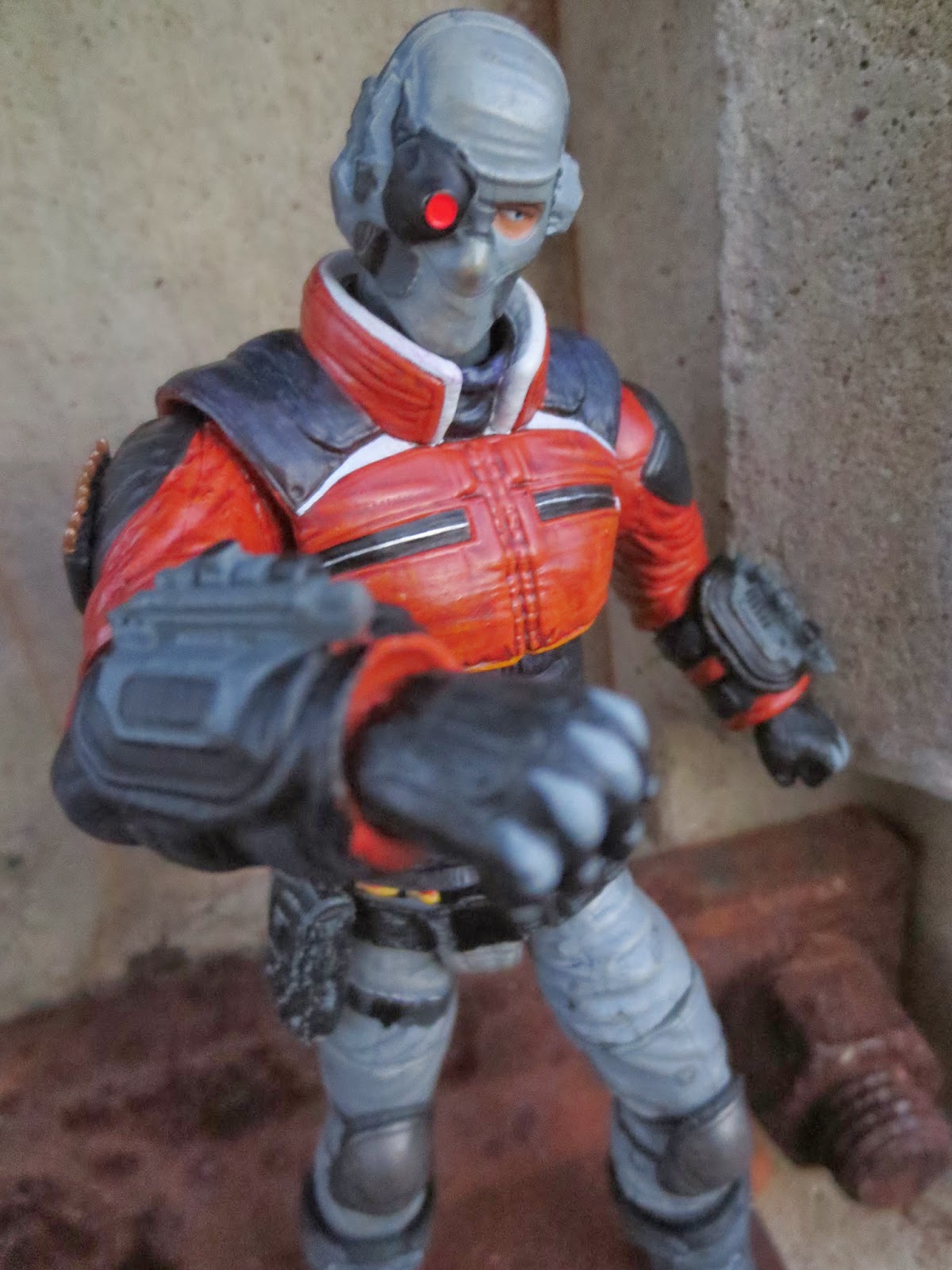 I've mentioned it before (and I would be happy to be proven wrong) but DC Collectibles has no discernible customer service number, email address, or department that I can find. Unfortunately, when most DC Collectibles toys are purchased on-line or at comic shops, what that means is you may not always have access to the best return policy. To me, that's just unacceptable. I love their product for the most part, but they deal in some pretty expensive stuff like statues and busts. Imagining buying one of those at a comic convention or at a comic shop, having a problem, and having nowhere to turn to? That's why I really recommend folks to use a great online E-tailer like Big Bad Toy Store. Yes, they are a sponsor of this site, but even before they were I've always sang their praises as having the best customer service in the business. Anytime I've ever had a problem they've responded quickly through their designated customer service channels, have rectified the problem, and have even followed up with more information about what might be the root cause of the problem so they can relay it back to the manufacturer. If you're looking for Deadshot, or any DC Collectibles product, really, I can't recommend enough that you purchase through them.

I've got one more special review that should make it up this weekend sometime, so keep reading! In the meantime, make sure to check out the rest of our Arkham-verse reviews here on ThEpic Review:
Batman: Arkham Origins by DC Collectibles
Anarky
Bane
Batman
Black Mask
Deathstroke
Firefly
The Joker
Killer Croc