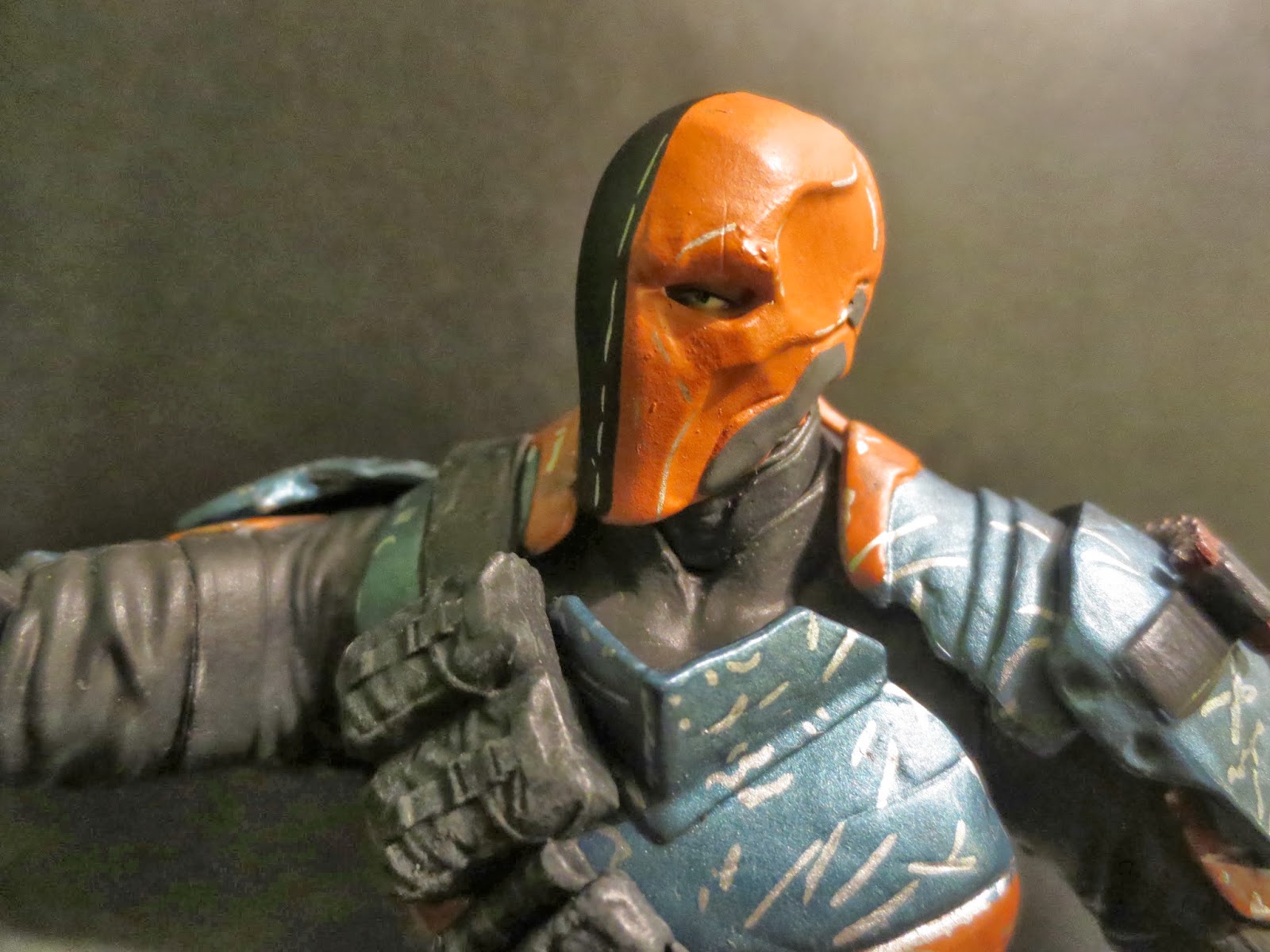 Another of the eight assassins hired by the Black Mask to take down Batman on Christmas Eve, Deathstroke makes his first Arkham-verse appearance in DC Collectibles' Batman: Arkham Origins series 2. This is not the first Deathstroke from Arkham Origins, however; back in November Mattel released Deathstroke and Batman based on their appearance in Arkham Origins as the final two releases in the Batman Unlimited line.  There have been quite a few Deathstroke figures lately, proving that Slade Wilson is a popular guy and fantastically designed character. I've reviewed the New 52 Deathstroke but never picked up Mattel's Arkham Origins version as I was holding out for this guy. How does he compare? Join me after the break and find out... 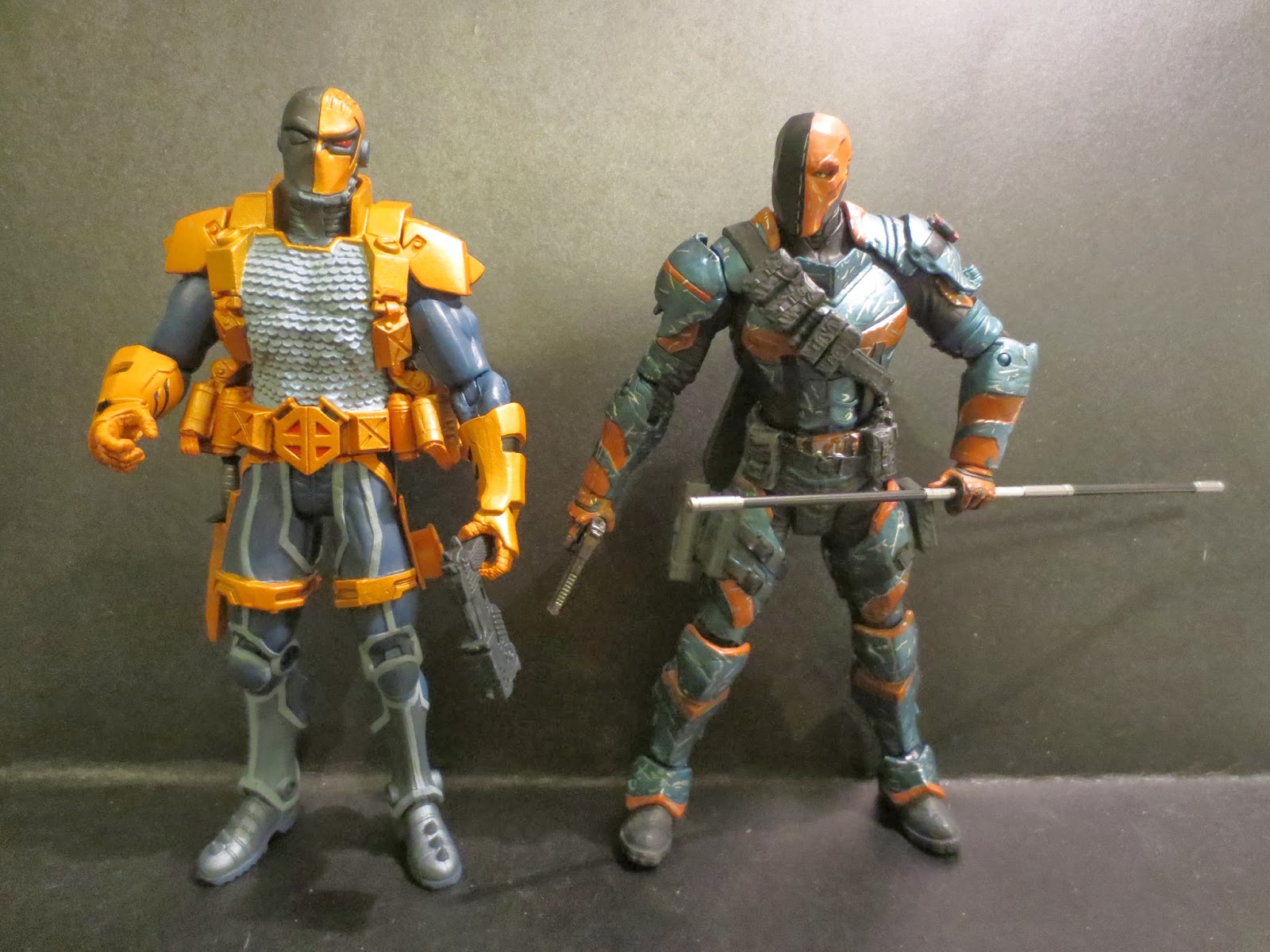 Deathstroke stands right around 7 inches tall and should look fine with any other figures from your Arkham-verse collection. I'm really loving this design as it perfectly matches the in-game look of the character but also is versatile enough to fit in with nearly any other DC line. Heck, this guy would look cool with certain NECA figures like Dutch or the Colonial Marines. He just has that awesome, tactical look to him that I'm a real sucker for and since all of his body is covered except for his left eye, even though he's sculpted with a video game aesthetic he won't clash with figures sculpted in a real world or comic book aesthetic. He has the same clamshell package design as the other basic figures, complete with the easy open package. I love that feature! 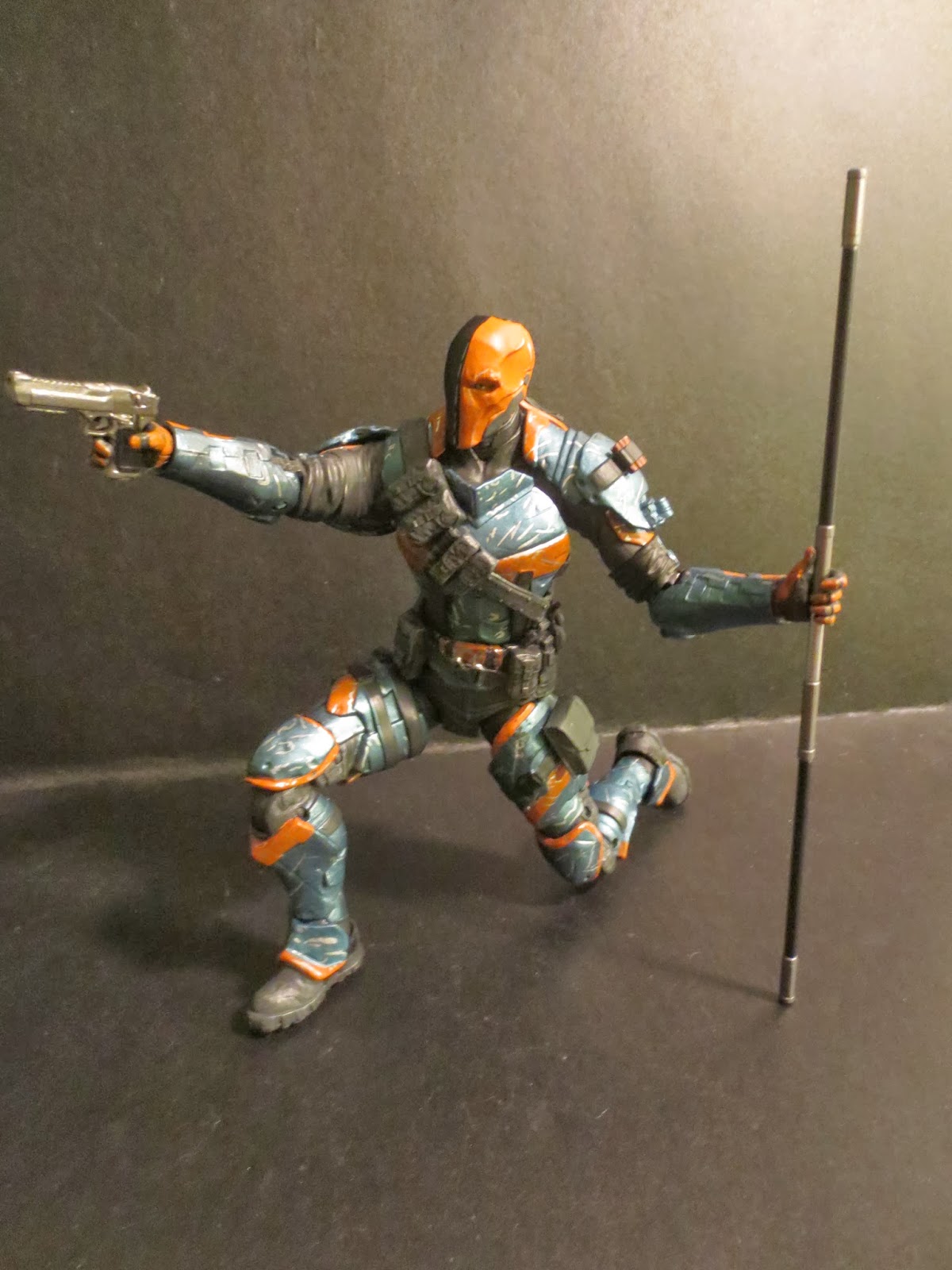 Deathstroke features the following points of articulation: swivel/ hinge ankles, double hinged knees, swivel thighs, swivel/hinge hips, a ball jointed waist, swivel/hinge shoulders, swivel biceps, hinged elbows, swivel/hinge wrists, and a true ball jointed head. Articulation wise, I think he's definitely an improvement over the New 52 Deathstroke and Mattel's Arkham Deathstroke. The joints might seem a bit stiff at first, so carefully loosen them up (perhaps a hair dryer on a low setting or some gentle back and forth movement) and you should be good to go. I love the ball jointed waist; it works great and doesn't effect affect the appearance of the intricate chest armor. I have a few complaints, though. One is that the ball jointed head doesn't have a very wide range of movement. It can swivel and look up and down a little bit, but that's about it. The other is that the hips seem kind of loose. This guy can be tough to stand up in a normal, vanilla pose. 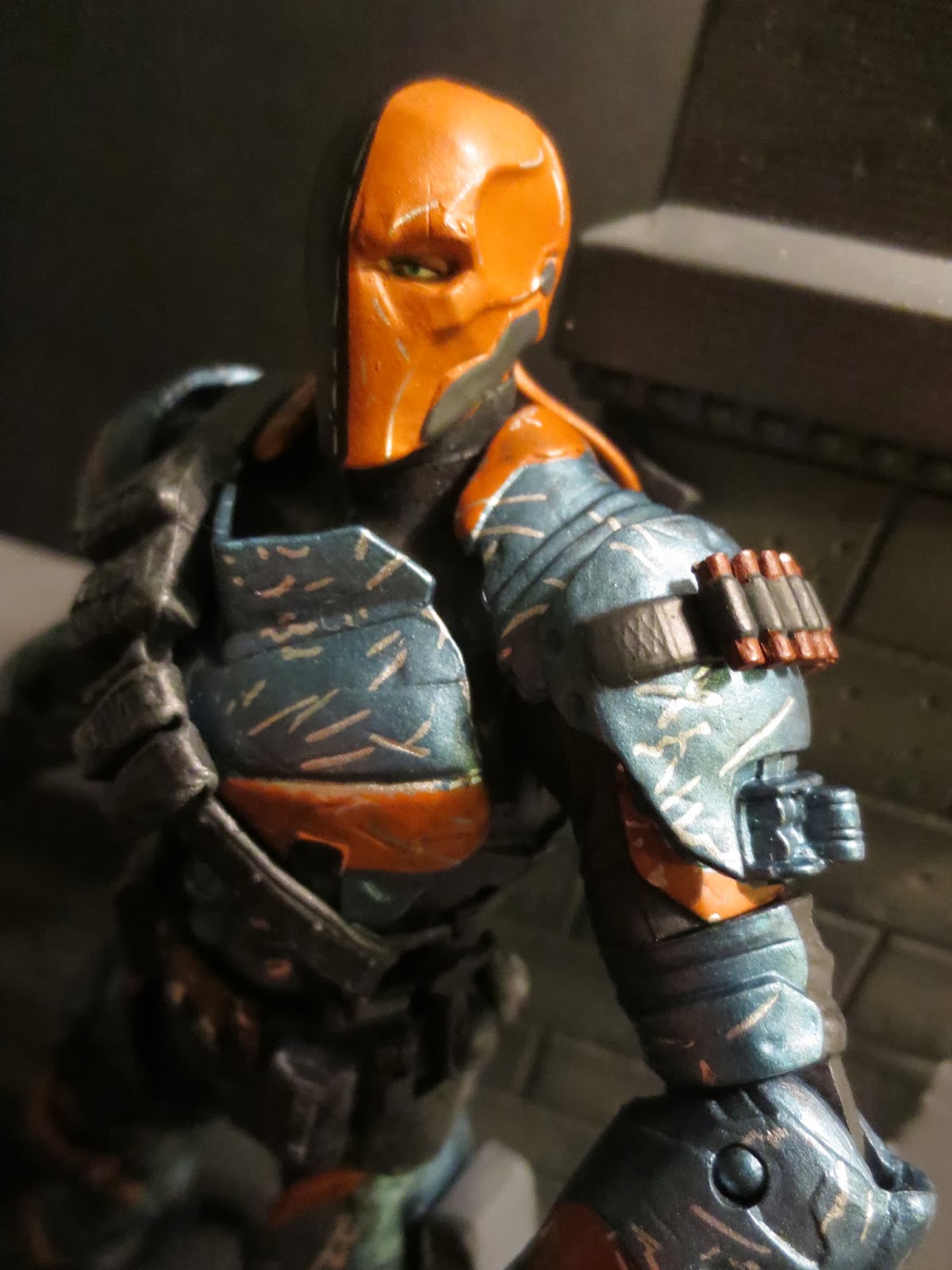 Sculpting costumes with lots of intricate details are one of those areas where DC Collectibles excels and fortunately for them, Deathstroke is a guy with a pretty intricate costume loaded with bits of gear and such. Separate dented and battered armored panels cover his bodysuit and make this guy look like a million bucks. Granted, it's a million bucks that has seen some action, but that's part of the allure. I love the look of the outfit and the eye for detail. Little things like the various grenades on his belt, the rivets holding his sword sheathe together, and shotgun shells on his right shoulder pad just complete the busy, functional nature of Deathstroke's uniform. 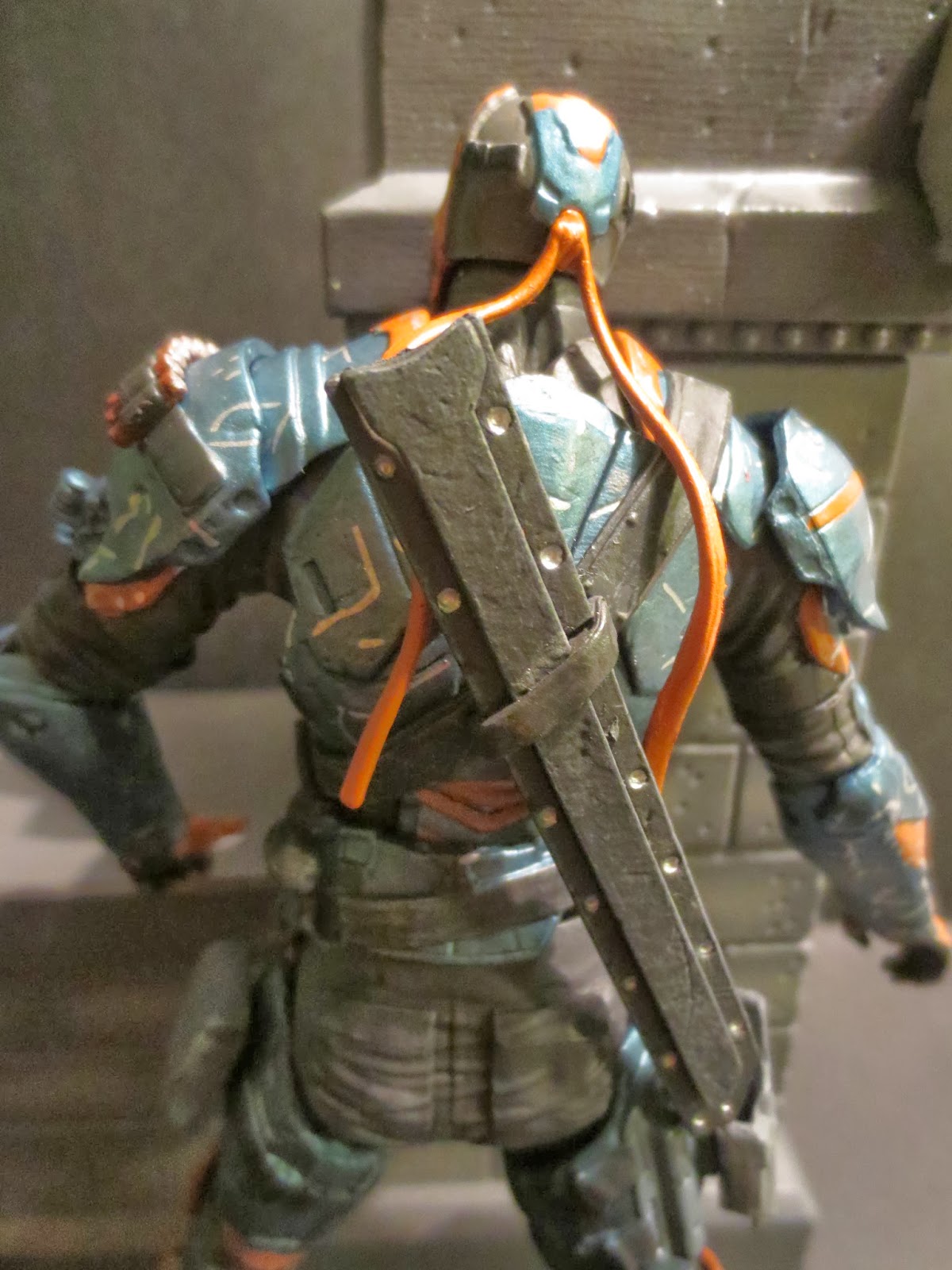 The paint work is stellar, as well. I'm really liking the use of metallic blue and orange for the plated armor mixed with a matte black for his jumpsuit and webgear. There's a lot of paint detail on the armor to give it a battered, worn look. There's also some nice drybrushing on the pouches and belt straps which helps them to look more like a cloth-like material rather than just plastic. Heck, even the little shotgun shells on his shoulder have silver paint on one end to look like the metal casing. Some of the extra molded little details like the grenades could have used a little paint, but overall I'm very happy with the paintwork. 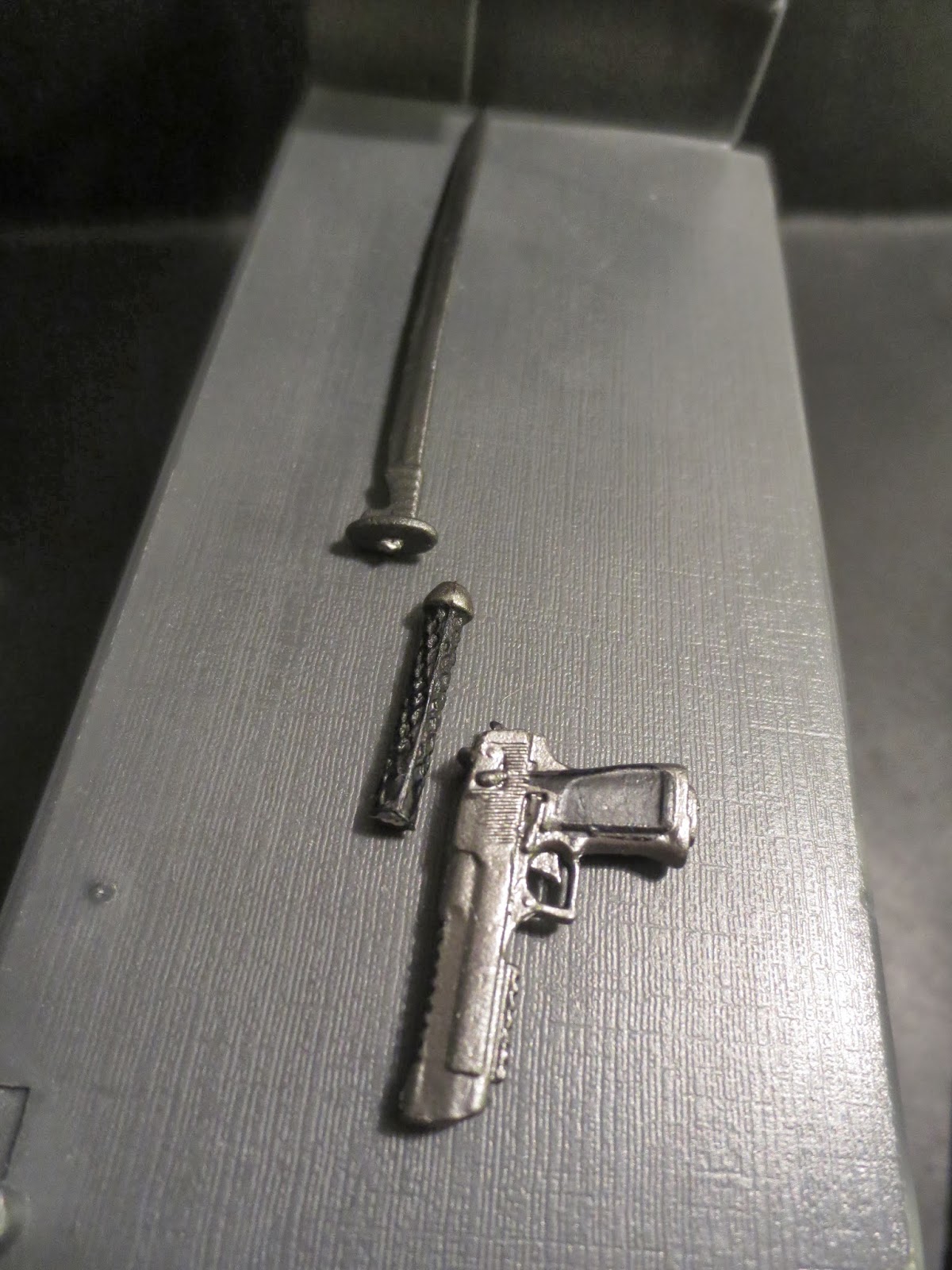 One area where Mattel's Deathstroke takes the cake is on accessories. Mattel gave Deathstroke his pistol, staff, knife, sword, and a very cool rifle. DC Collectibles left out the rifle. His sword and staff are a bit plain (the sword does fit nicely in his sheathe, though) but the pistol is incredibly cool. To my eyes it looks like a custom .50 caliber handgun. Deathstroke has a nice holster (it's a bit floppy, but works) which it can be stored in. Unfortunately, the sword is kind of fragile as while I was removing it from the sheathe the handle pulled right off. I hate when accessories break! This really should have been made of a better material (it probably should have been a bit thicker, too). I really wish DC Collectibles had included his claw weapon which Batman takes from him after their fight aboard The Final Offer. That would have been a neat accessory to make up for the absence of a rifle (or a broken sword). 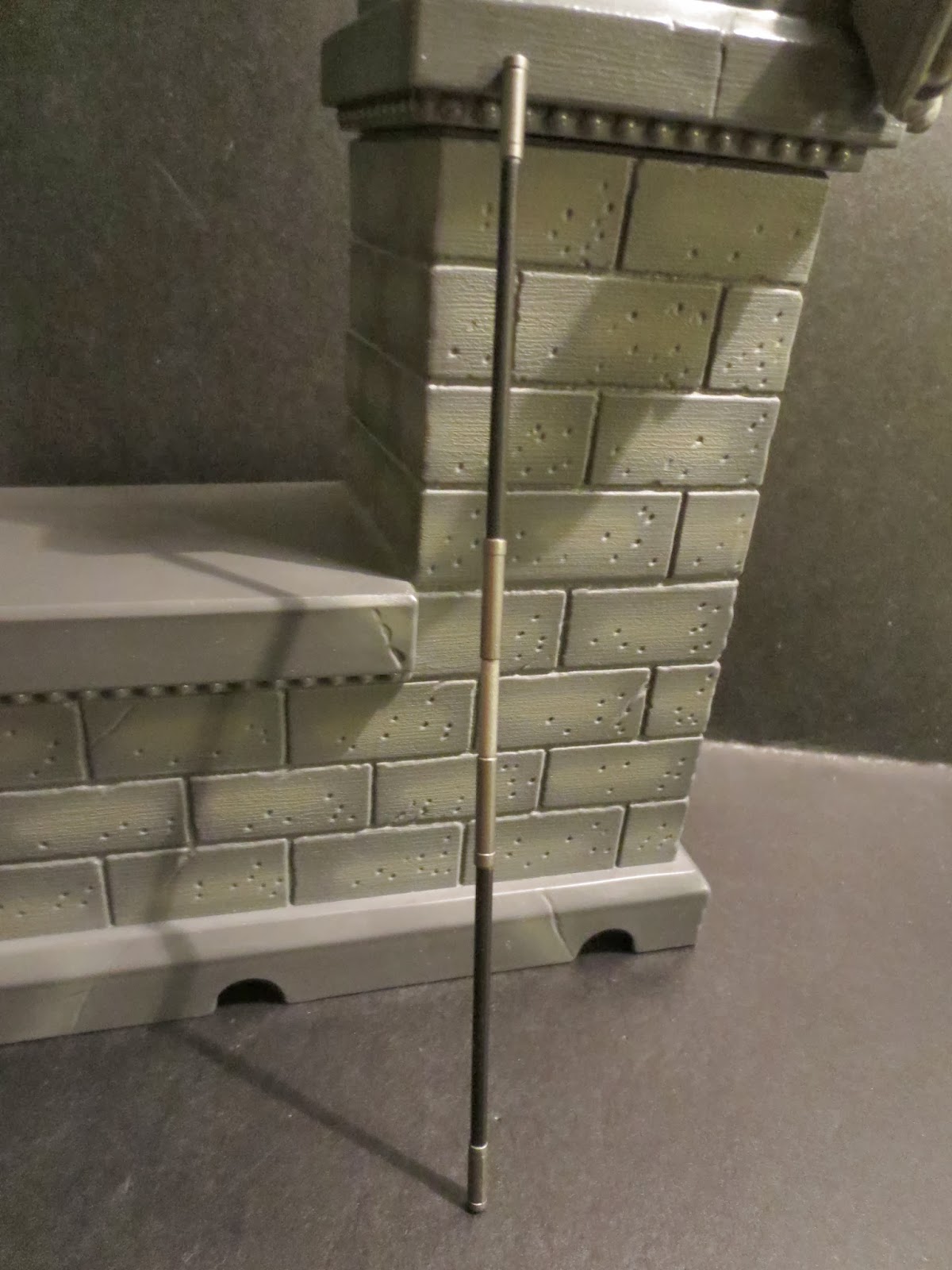 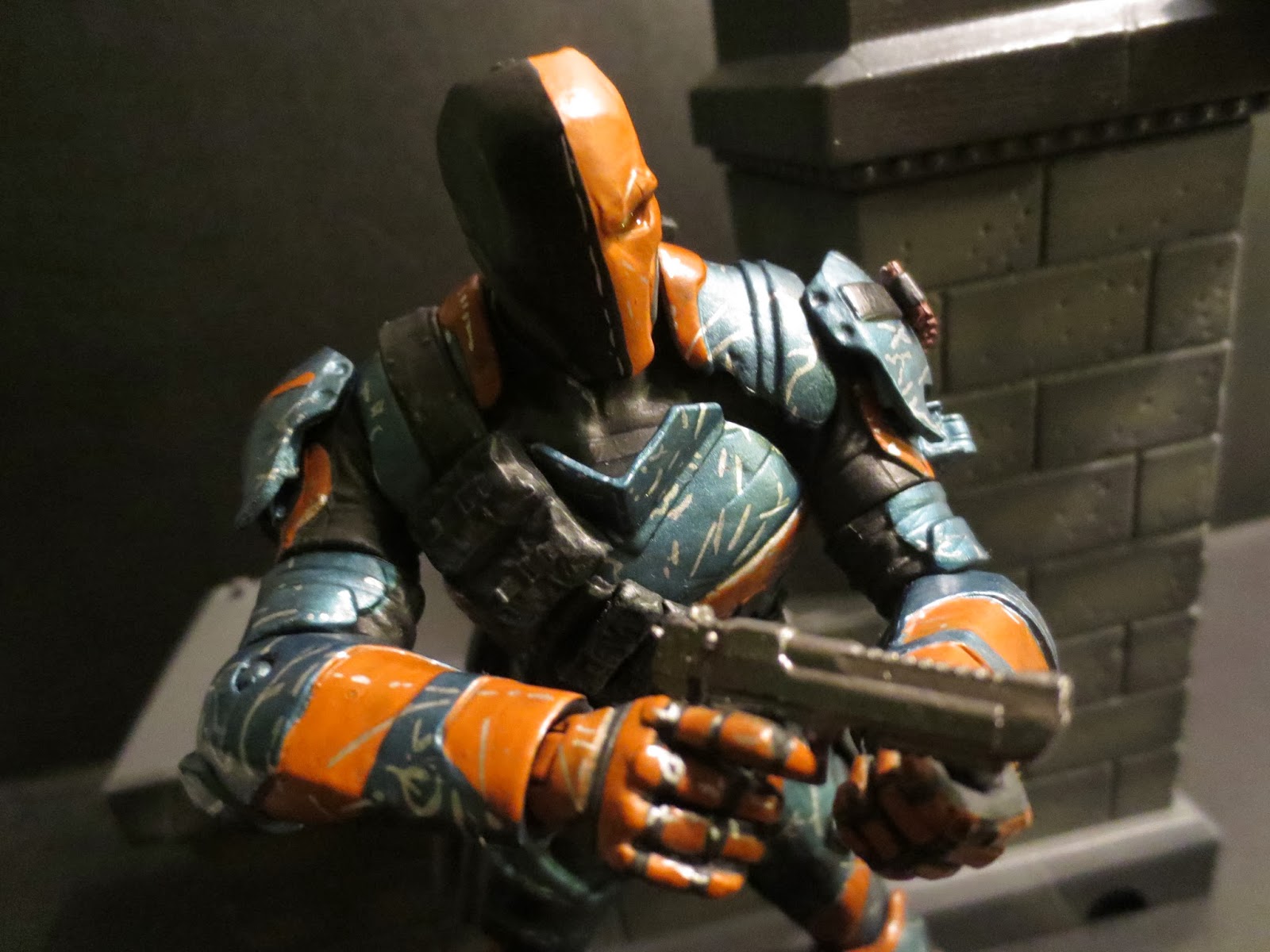 I'm starting to build up a small army of Deathstroke toys. I'm completely OK with that, though, as I always find his different looks interesting. Overall, I like this figure, but despite having better articulation that the New 52 Deathstroke, I'm not sure I like this figure better. This guy has more detail in his costume and a more intricate paint job, but that doesn't necessarily mean I like the design better. His weapons aren't as nice as the New 52 figure's, however, and the whole breaking sword thing kind of puts me off. Of course, I'm still glad to have him in my Arkham display, but overall he's just not as good of a toy as my previous Deathstroke figures (I still love the DC Universe Classics Deathstroke best). Factoring in the positives (great sculpt and paint and some approved articulation) with the negatives (weaker arsenal, some questionable articulation, a broken sword) I'm giving Deathstroke a Good and a 1/2. He's not bad, but if you're looking for only one Deathstroke for your collection, I truly think their are better options out there.

If you're looking to add this guy to your collection, Big Bad Toy Store has him for $2 less than the MSRP right now!
Check out are our other Arkham-verse themed reviews: