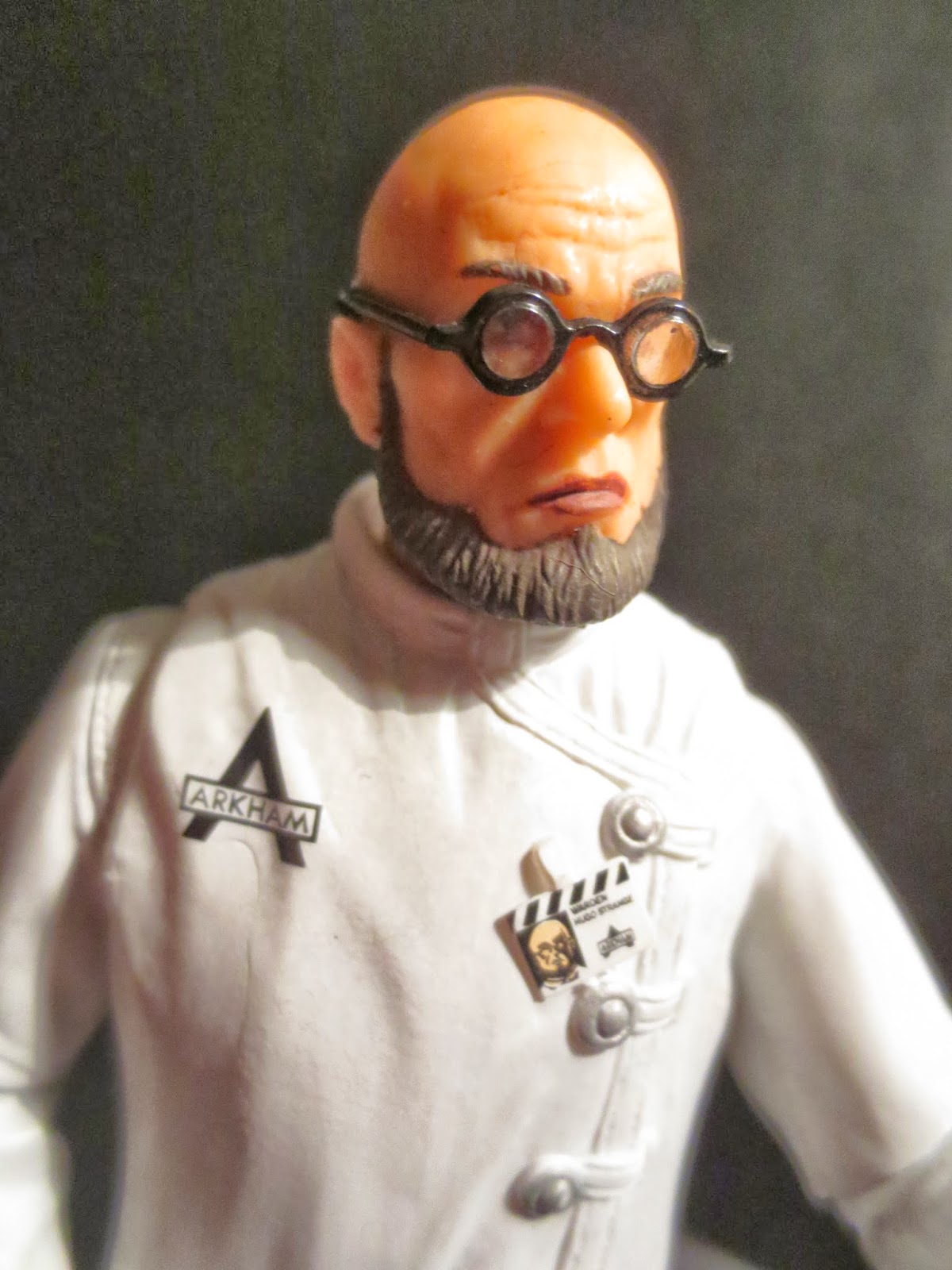 Dr. Hugo Strange is one of Batman's earliest villains and yet he rarely gets the same respect those other guys do. First appearing in Detective Comics # 36 in early 1940, Professor Hugo Strange was kind of a stereotypical mad scientist. Over time, however, he became a more cunning foe to the Batman; it is no stretch to say that Strange became obsessed with Batman. The only Hugo Strange figure we've received in the past has been from DC Direct's Secret Files line and featured Strange in the Batman costume he often wore around his home. It took Strange's appearance as one of the main antagonists in Arkham City and an opportunity for a SDCC exclusive to finally get Bat-fans a quite definitive Hugo Strange for their shelves. Released as an exclusive for SDCC 2013 by DC Collectibles as part of their Arkham City line, this figure fills a major gap not just in an Arkham collection but in any Batman collection in general. Ready for a look at Dr. Hugo Strange? Then join me after the break.... 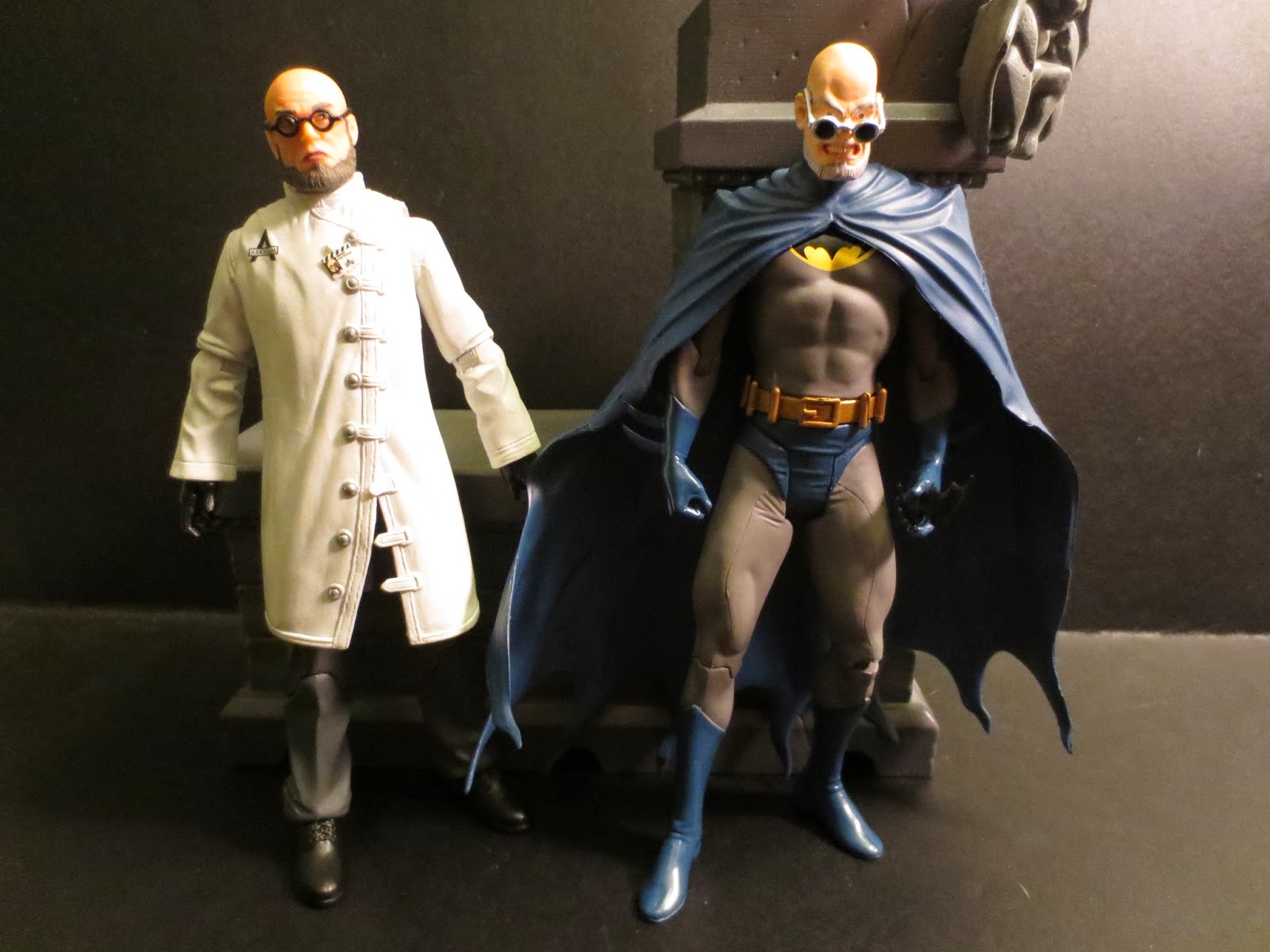 Dr. Strange is right around 7 inches tall (just a smidge under) which means he should fit right in with any of the Arkham-verse figures from DC Collectibles. Heck, since he's often portrayed as being a pretty tall guy, I'm sure some fans wouldn't mind him in their DC Universe Classics collections. Strange looks just like his in-game rendering that gives a nice mix between a realistic look and a more comic book inspired appearance. The figure was sold exclusively as SDCC 2013 and was sculpted by Sam Greenwell. 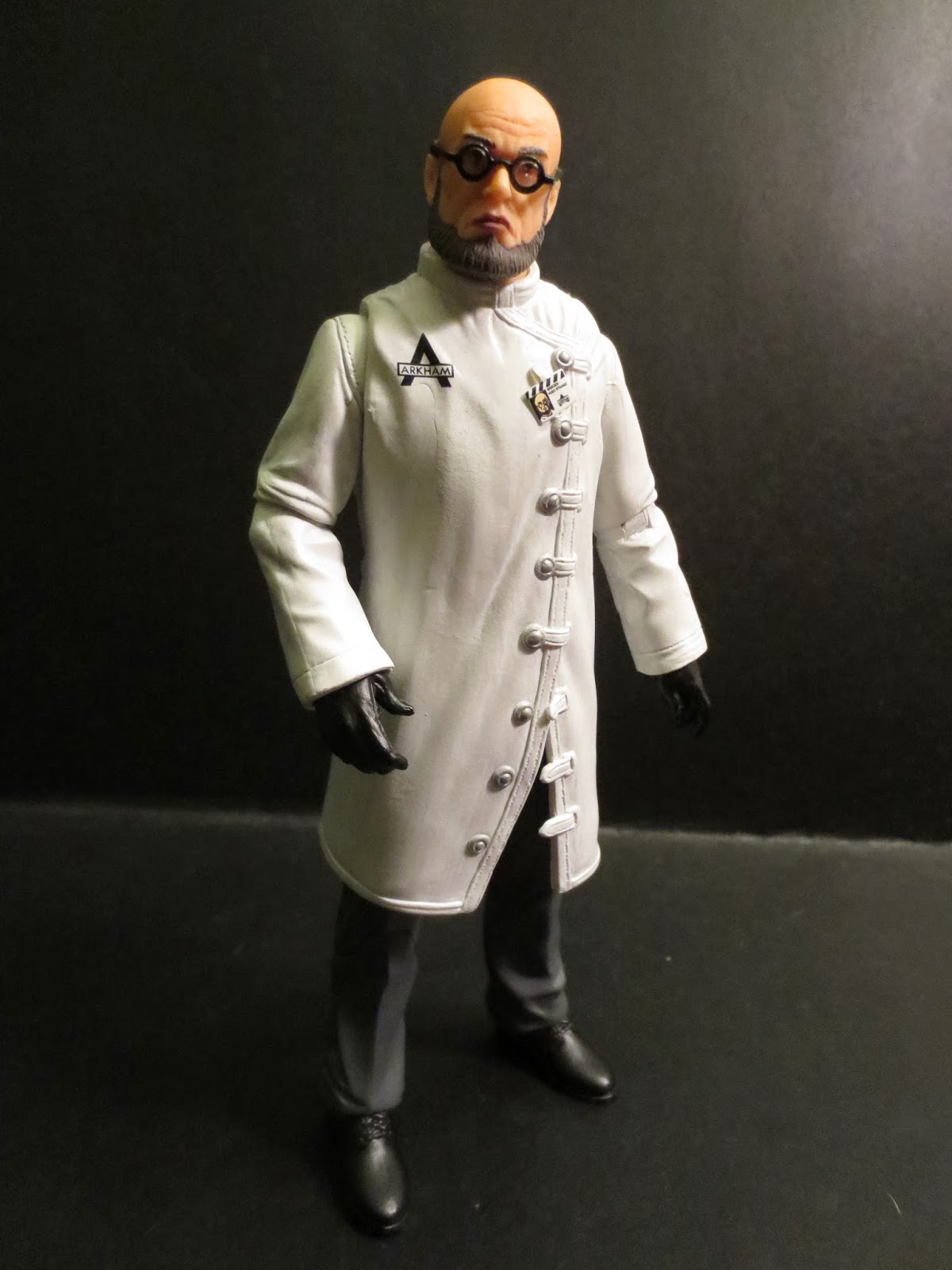 While Dr. Strange isn't going to be winning any limbo contests, but that doesn't mean he isn't well articulated. Actually, his articulation feels much more solid and sturdy than many other DC Collectibles Arkham-verse releases. Dr. Strange features: swivel ankles, hinges knees, swivel hips, a swivel waist, swivel/hinge shoulders, swivel/ hinge elbows, swivel wrists, and a ball jointed head. While his coat and the cuffs of pants restrict a few points of articulation, I don't really feel that it's too much of a problem here. How much moving about do you need him to do, anyways? I'm really pleased with the amount of articulation he has and the solidness of the figure. 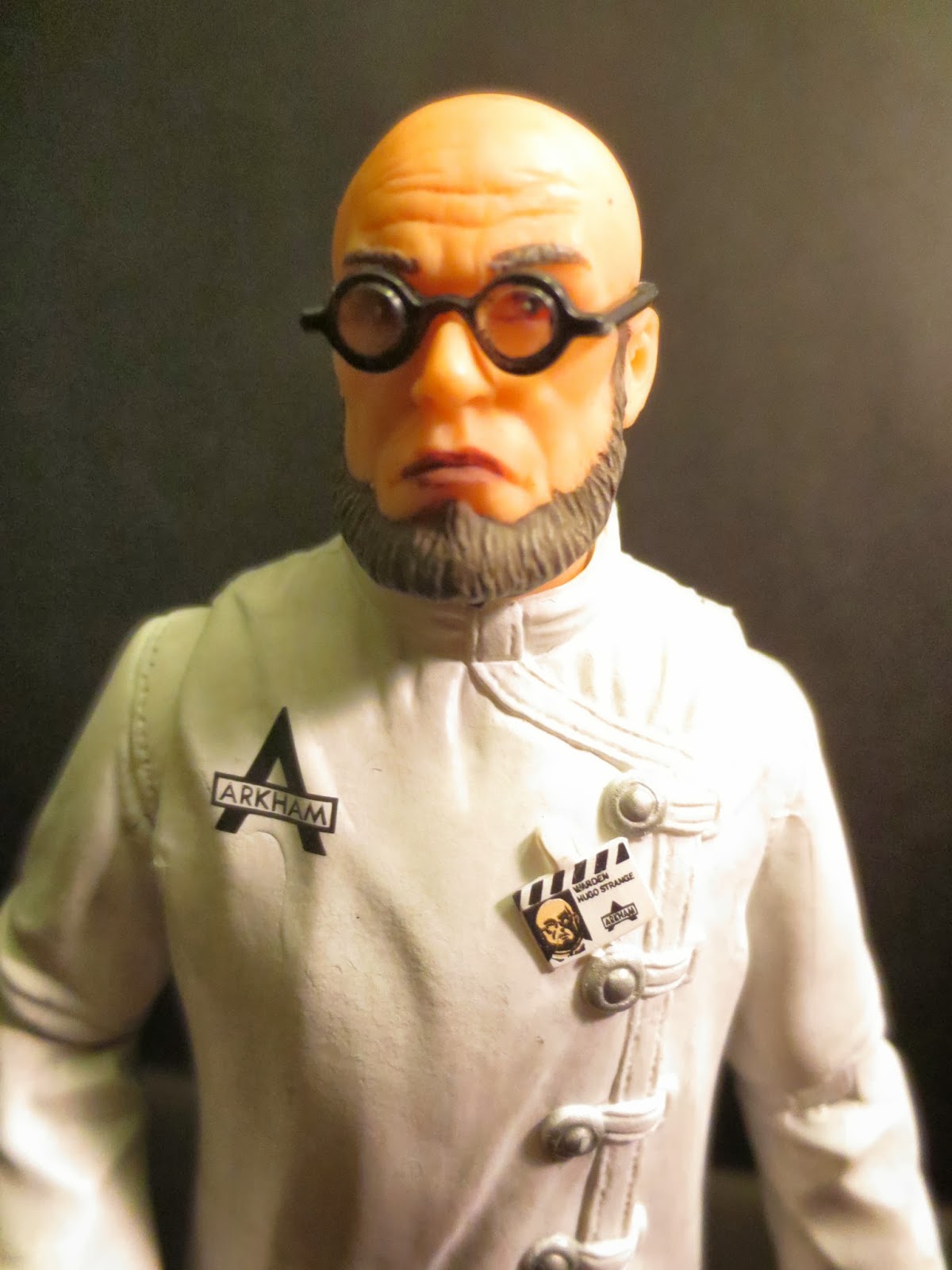 While Dr. Hugo Strange has a very simple look to him, it's a look that perfectly suits his character both in the Arkham-verse and in many of his comic appearances. He's simply clad in grey trousers, black dress shoes, and a white lab coat. While the arms of the lab coat are sculpted, the main coat is simply a sculpted softer piece permanently affixed over Strange's torso. It has some nice work on the seams, straps to keep the coat closed, and even a tiny ID badge clipped onto the left breast. The head sculpt looks like Professor Strange; bald head, funky beard, dour expression, and some tiny round glasses. The glasses are a separate piece with actual lenses which sometimes is a recipe for disaster on smaller figures, but they look great here.  Seriously, I'm not really sure what else could have been done to improve this figure. Strange is a fairly plane character so far as his design goes, but DC Collectibles managed to still turn him into an appealing figure. 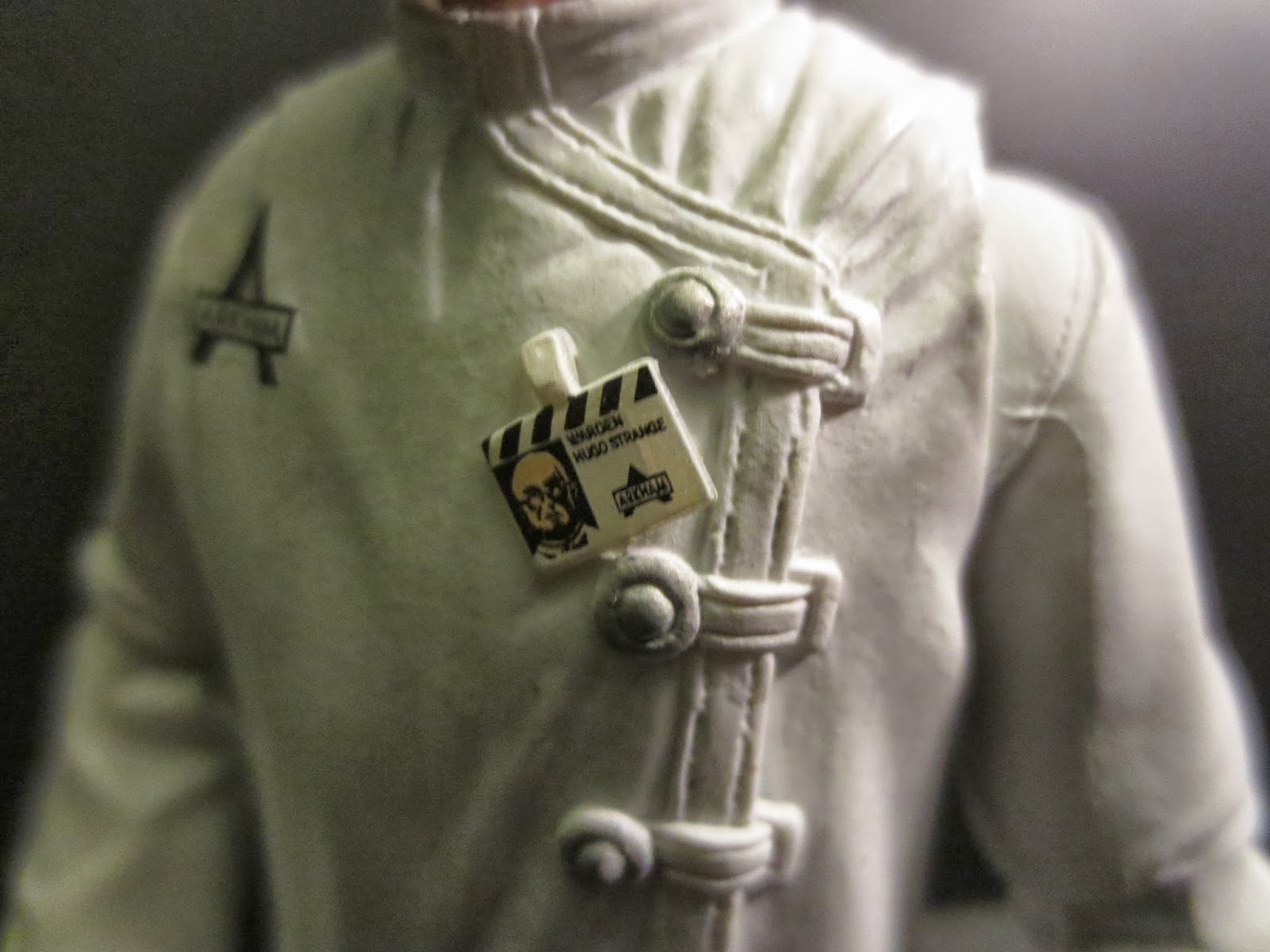 The paint work on Dr. Hugo Strange really helps to make a plain design pop. Most of the figure is pretty basic: gray pants, black gloves and shoes, and a white coat. The coat has a nice drybrushing on it to give it a bit more "textured" appearance. It perfectly fits the Arkham-verse aesthetic and looks great. Small details like the "Arkham" logo on his right breast and the miniscule details on the ID badge (you can actually see the tiny picture of Strange, the Arkham logo, and the words "Warden Hugo Strange." The head is actually molded in a flesh toned plastic and it gives the figure a really nice look. The eyes, lips, and beard are all clean and neat. Once again, simple but well done. 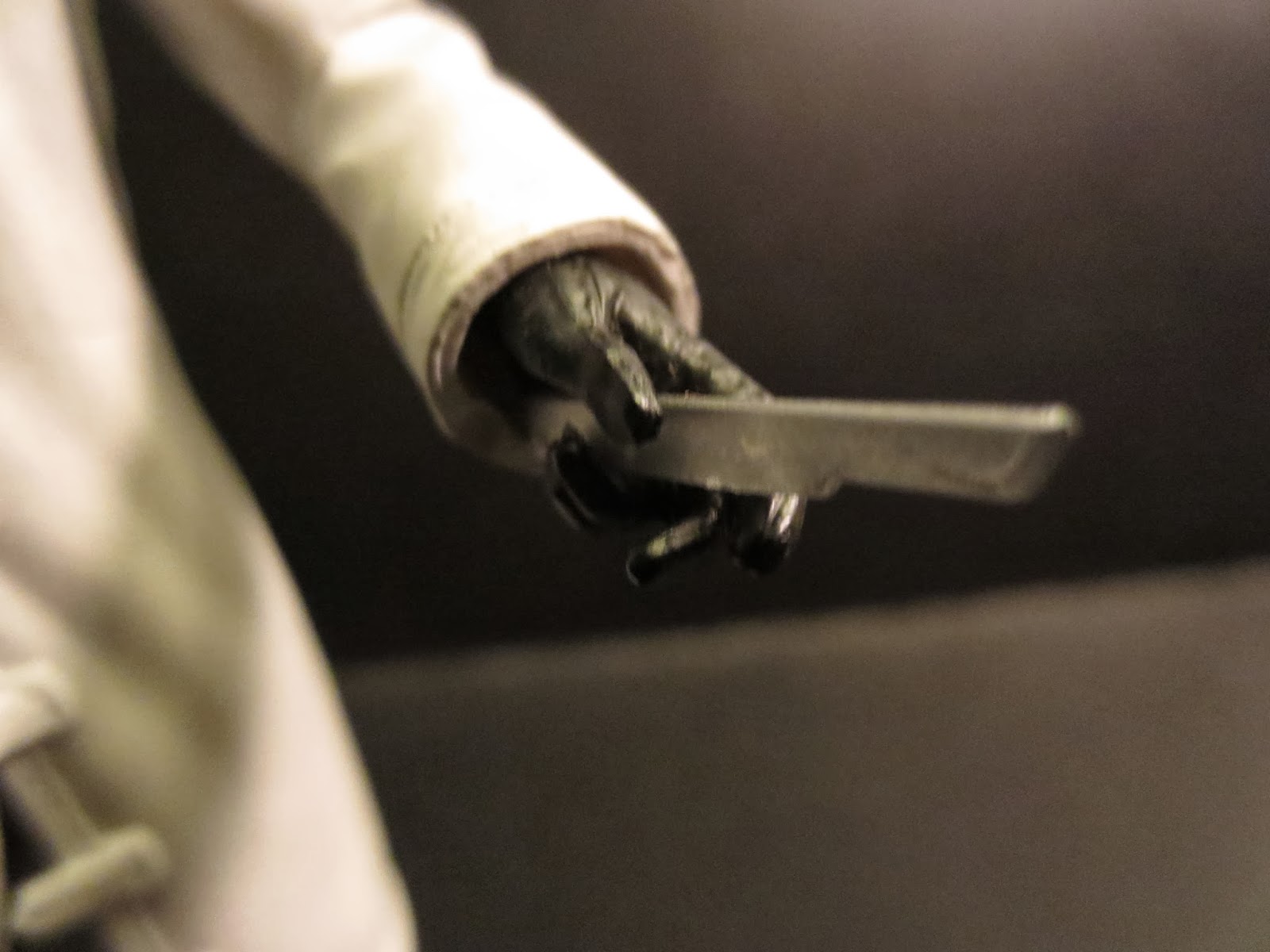 Strange comes with two fairly small accessories, but they work for his characters: a scalpel and a syringe. The scalpel is simply a tiny silver plastic scalpel while the syringe looks to be molded in clear plastic with silver paint apps for the needle and injector. I don't know what's in the syringe, but keep it away from Speedy! Both accessories can fit really well in Dr. Strange's left hand, which is quite impressive. They're not the biggest or the best, but they're well done for what they are and make sense with the character. If Hugo Strange had appeared in the Batman: The Animated Series line, what accessories do you think he would have came with? I could see him simply being a new head on a "Quick Change Bruce to Batman" body to replicate his Batman-obsession. 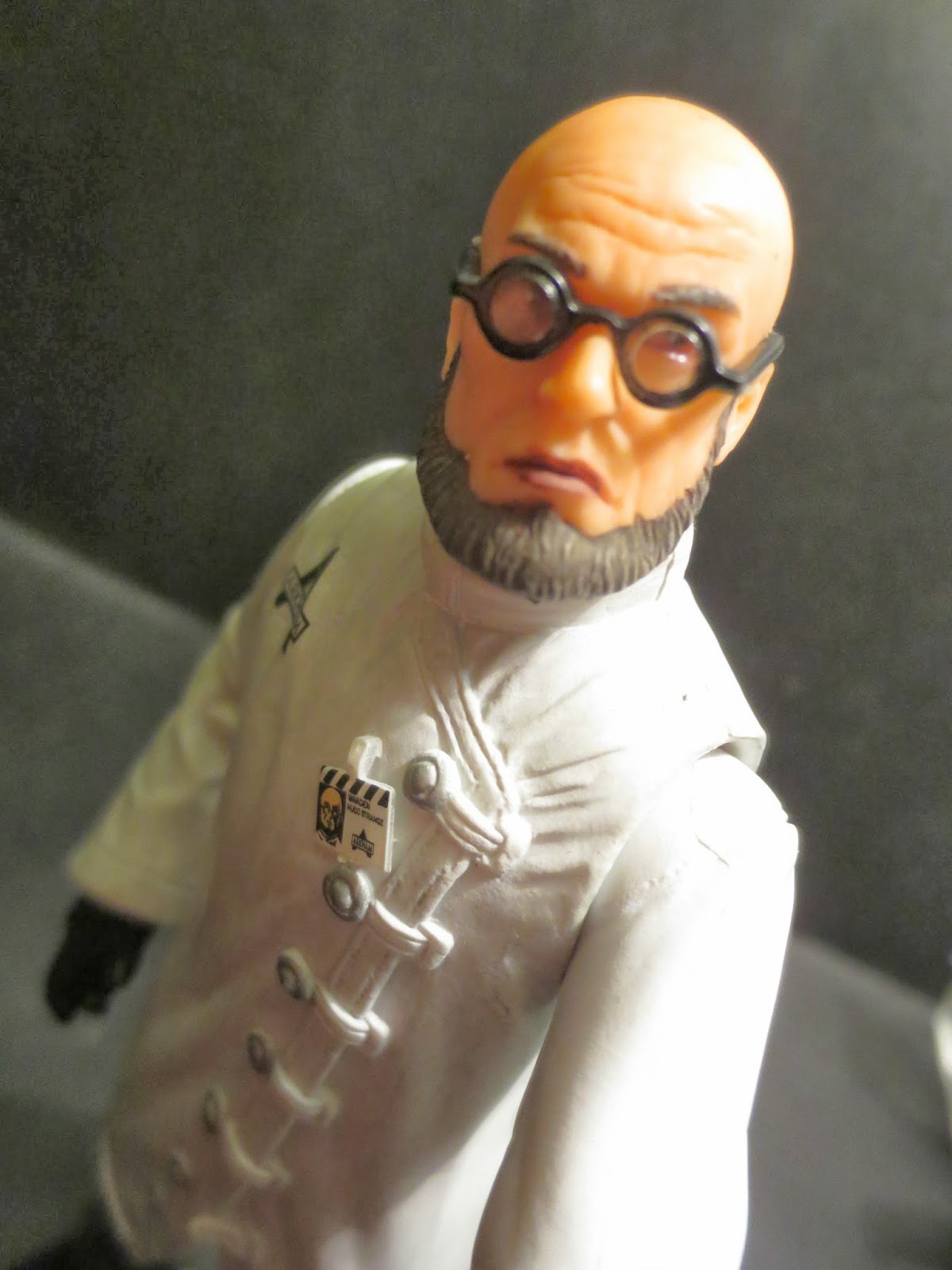 Not only does Dr. Hugo Strange really fill a gap in DC Collectibles' ever growing Arkham line but he also feels like he fills a major gap in the 6-7 inch scale Batman line-up in general. The DC Secret Files figure is good, but it's just not the first look I think of for Strange (it seems more like a Batman figure with an alternate Strange head). While I definitely think Dr. Hugo Strange would have been a perfect addition to a new Arkham City series, he wasn't a bad exclusive at all. He's such a great figure that I hate that so many Bat-fans will end up missing out on him. Good articulation, a great sculpt, nice paintwork, and some fun accessories really make this guy stand out to me. Based on how well done he is, how durable he feels, and how significant of a gap he feels in, I'm pretty content with giving Hugo Strange, M.D. a Great and a 1/2.  Dr. Hugo Strange proves both that a simple concept can still be executed brilliantly and that even if you're a big bald guy with a funky beard, there is still a character you can cosplay without resorting to spandex.

Unfortunately, Big Bad Toy Store is all out of Dr. Hugo Strange. Those SDCC exclusives go fast! In the meantime, check out our numerous Arkham-verse reviews here at ThEpic Review: