Action Figure Review: Hydron from Masters of the Universe Classics by Mattel 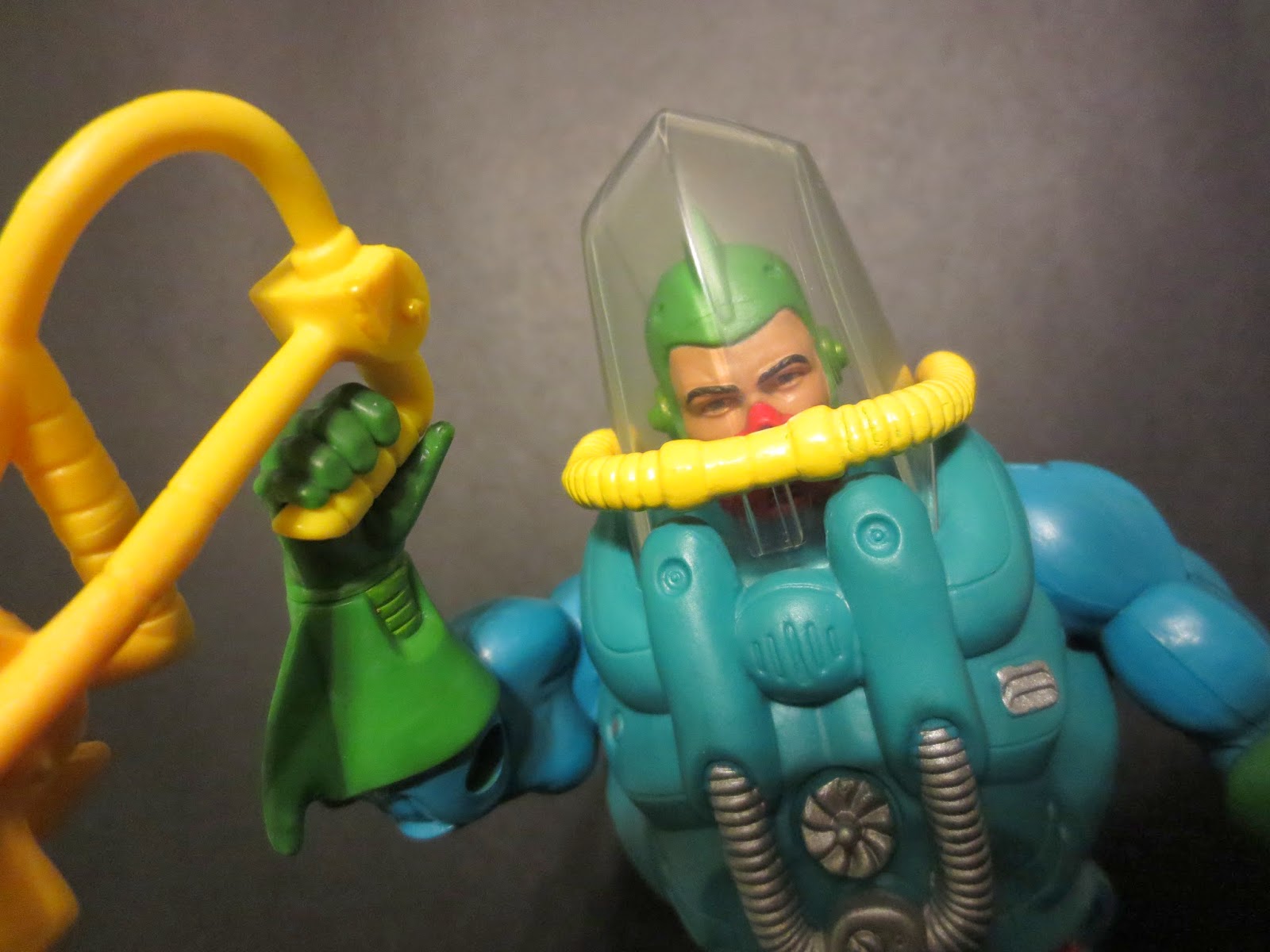 I really like the New Adventures of He-Man. Sure, the cartoon's not the greatest and the toyline was pretty different from the vintage Masters of the Universe line, but there's something I love about the Conan inspired He-Man taking cues from other pulp heroes like Flash Gordon and John Carter of Mars and taking off into space. Some of my favorite releases in MOTUC have been the far too few New Adventures characters that have been worked into the line. Hydron here was originally released in the first series of New Adventures action figures in 1989 and was one of the main cast members on the Jetlag Productions animated series, so he's about as important of a character in that storyline as you're going to get, excluding He-Man and Skeletor of course. He's also wearing a diving suit. In space. Yeah, that might seem a bit strange, but think about how many planets have water? About 71 percent of Earth's surface is covered by water. What about Kamino? or Mon Calamari? Land on one of those planets and you're going to be wishing you were wearing a diving suit, too. Anyways, read to find out if ol' Hydron sinks or swims in MOTUC? Then join me after the break... 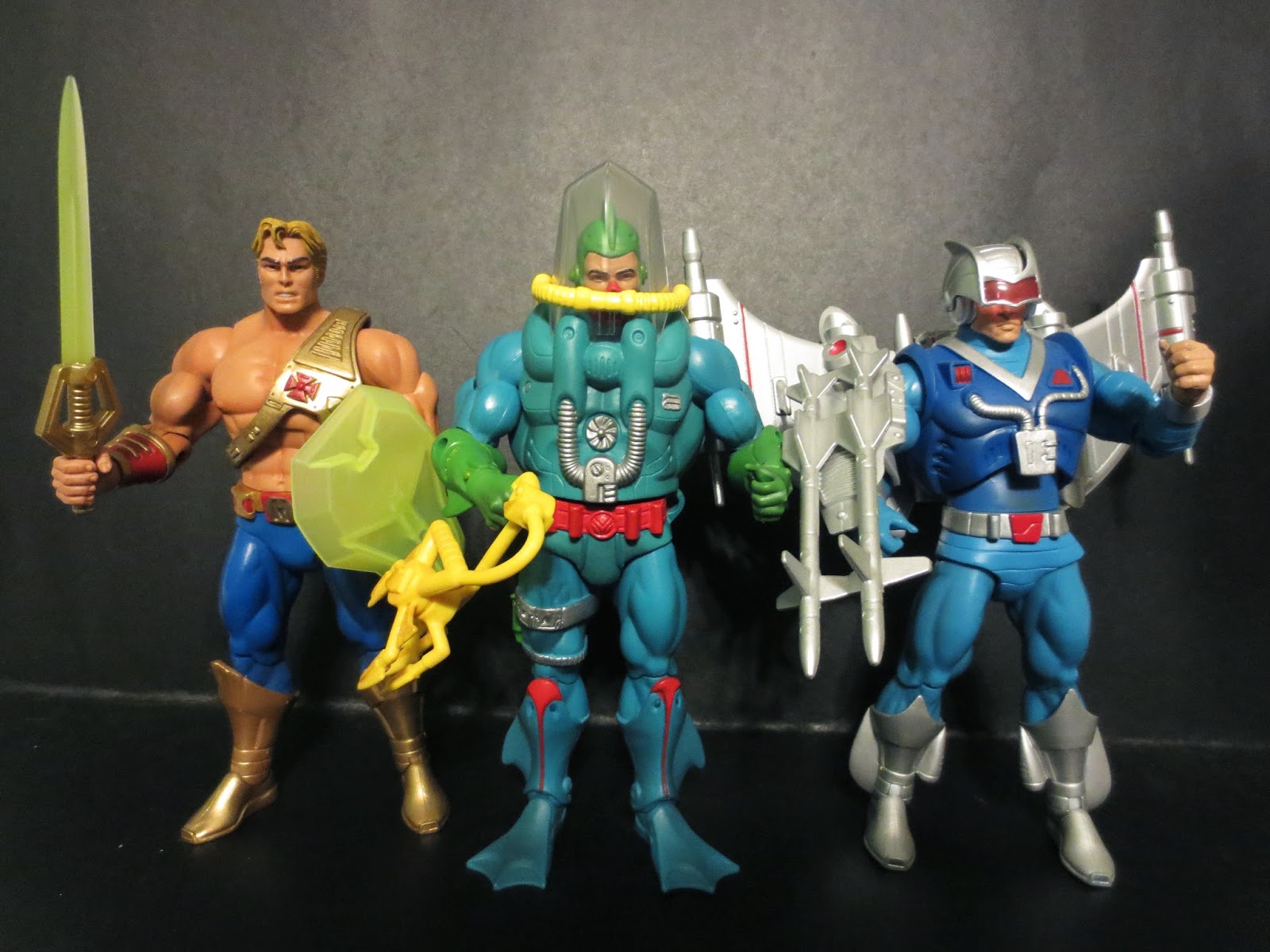 Once again, I think the Four Horsemen have done an excellent job in translating the a New Adventures figure into MOTUC. Based on 1989's Hydron figure in the New Adventures toyline, Hydron here has the same design aesthetic and beefy proportions as the vintage MOTU based figures in Classics but still manages to have the more detailed, sci-fi aesthetic of the New Adventures toys. I really love the inclusion of NA stuff in MOTUC because it not only gives these characters a second chance but it also fills in some gaps in the roster. It's cool to have Hydron since he's a water based fighter to counter Evil Warriors like Mer-Man and Clawful. Utilitarian! Hydron is actually fairly tall if you factor in the fin on top of his helmet, coming in closer to 7 1/2 inches with it included. Surprisingly, he doesn't share too many parts with other figures in the line. He only seems to share the basic torso, shoulders, biceps, hands, and a left thigh with previously released male figures. Everything else seems to be completely new. It really seems that so far this year we are getting quite a few new sculpts. 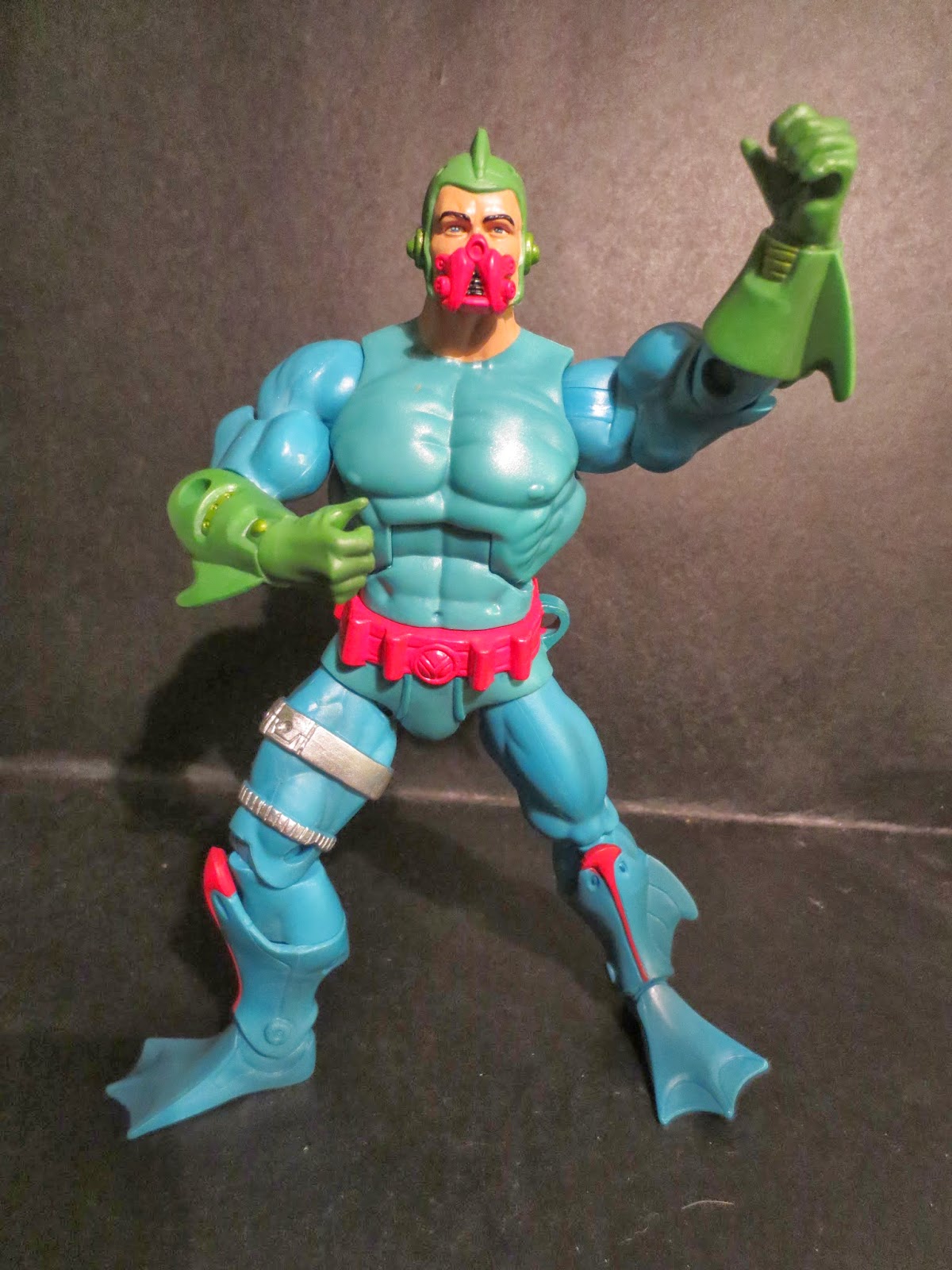 I've always been a huge fan of the MOTUC articulation style and it still works quite well for me. Hydron has: hinged ankles, boot swivels, hinged knees, swivel thighs, swivel/hinge hips, a swivel waist, an abdomen hinge, swivel/hinge shoulders, swivel biceps, hinged elbows, swivel wrists, a hinged neck peg, and a ball jointed head. All of the joints are nice and tight with no QC issues. While Hydron has some full torso armor, it is loose enough that the abdomen joint does allow him to move a little. I'm not too concerned about this issue, but I do find it off that Hydron's ankles have different degrees of articulation. I usually would not have noticed this, but I attempted to put him in a swimming pose; it turns out that his left ankle can't go back as far as his right ankle. Kind of strange. Otherwise, no problems here. 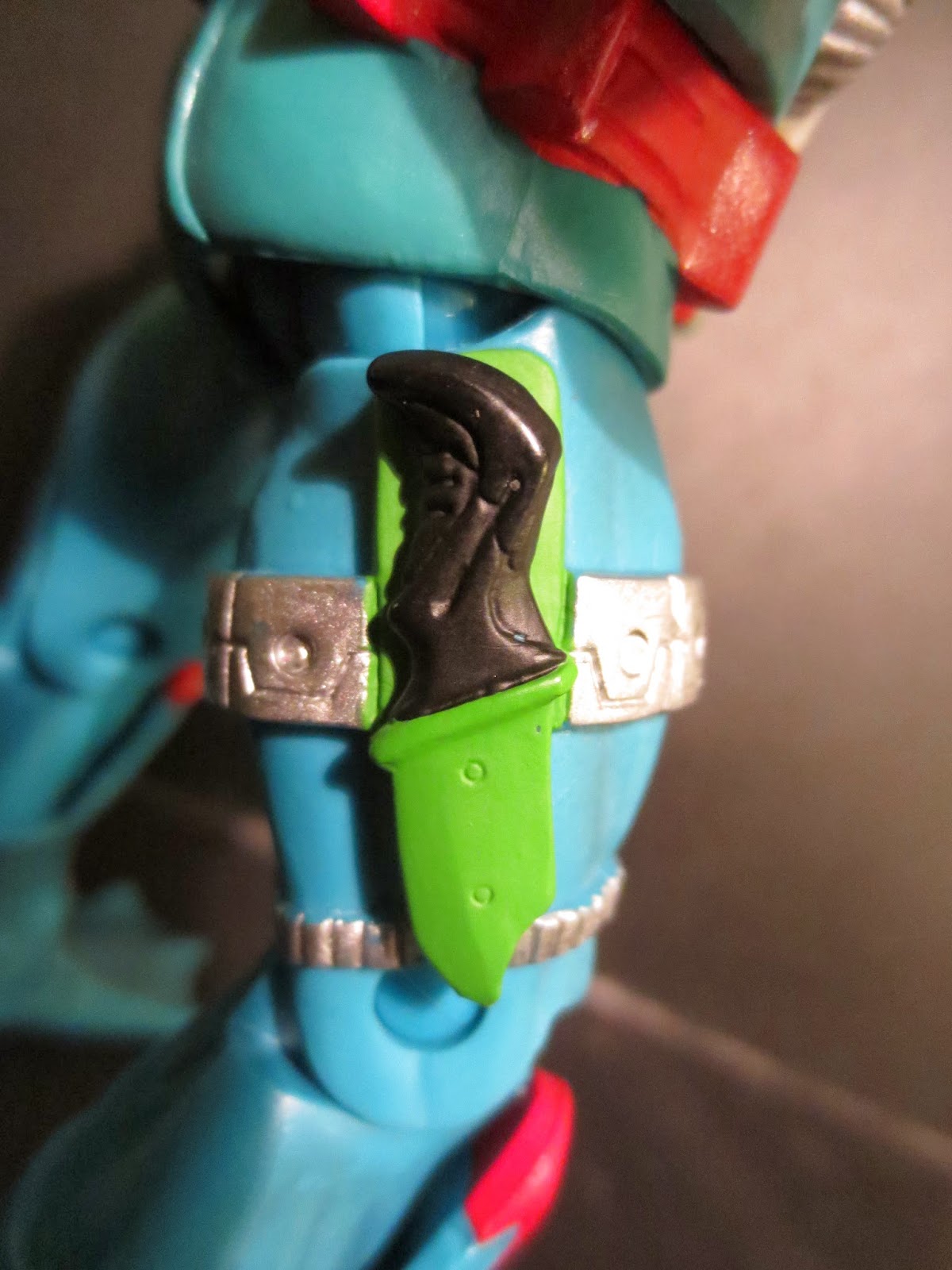 So, Hydron is totally an astronaut in a diving suit. He flies a spaceship. He also has flippers on his feet and fins on his arms. Whatever. This is MOTU I like him a lot, but I'm going to have to address his oversized torso armor. I'll get there. Let's talk about the positives first, starting with all of the cool new pieces that the figure has. Hydron's boots and gloves look fantastic. Not only do they faithfully match the original figure's but they also have plenty of little details on them such as the little jets on the back of Hydron's boots and the little panels on the gloves. He also has the very cool sheathed diving knife with little pouches on larger thigh strap. I really wish the knife had been removable, though. 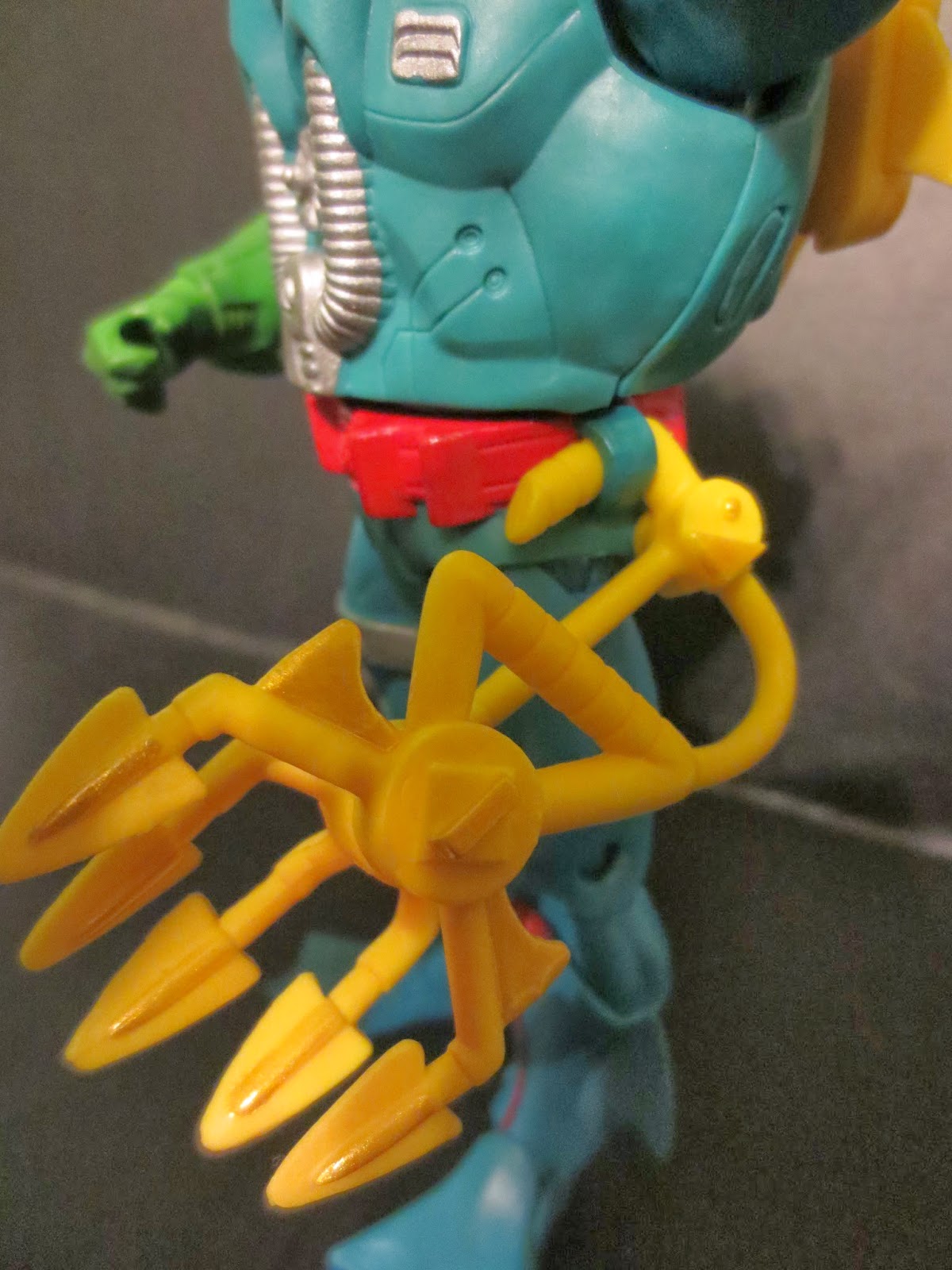 Interestingly, Hydron does have a functional holster of some sort on his left hip. It's a loop on his belt that seems to be intended to hold his Triton spear gun. It doesn't work too well (it's a bit stiff while the spear gun handle is a bit rubbery), so unfortunately there is a spot of poor execution. What isn't poorly executed, though, is Hydron's waist piece. While we've had so many problems with Mattel creating the waist pieces on most of the female figures (see Glimmer and Octavia), Hydron is another example of creating a waist piece that's not a skirt and that still remains functional without limiting articulation. Why is this possible on the male figures but impossible on the females? Anyways, all of the paint details on the figure look great, even the tiny little bits and bobs here and there. 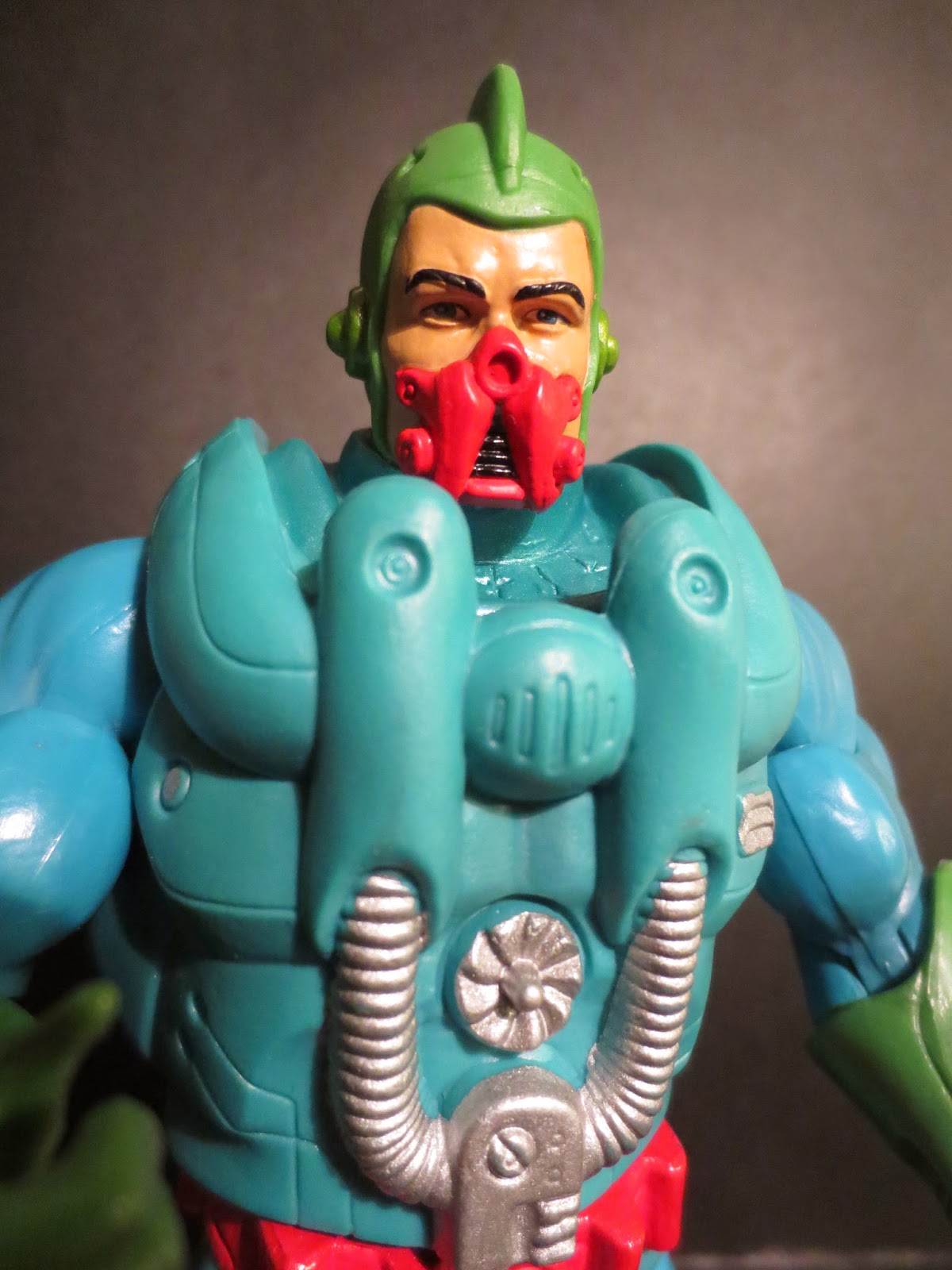 OK, so let's talk about the torso armor: For awhile we've been noticing that the torso armor has been getting more and more bulky on the figures. Frankly, this really didn't bother me all that much as I think the chunky aesthetic works for MOTUC, but for a lot of collectors this has been a tragedy. Hydron's armor is the first time that I think I really care. Interestingly, Hydron's armor seemed to me like it wouldn't matter if it were oversized since it's a diving suit and would obviously be a bit bulky, but this isn't just bulky. It doesn't fit. It's quite oversized, ill-fitting, and just poorly designed. It's odd that this far into the line, there seem to be new problems coming up like this; What could be causing these design issues? I'm really unsure, but even now these issues still need to be addressed and fixed. Fortunately, while it fits like Ram-Man's armor on a Twigget, the armor does look very nice. It's fantastically sculpted and as well detailed as you'd expect from a New Adventures based figure. The paint's a bit messy on some of the silver tubes, though, but nothing figure breaking. I especially like the part of the armor that sits under Hydron's helmet and around his neck; there are some really interesting little marks and details in there. 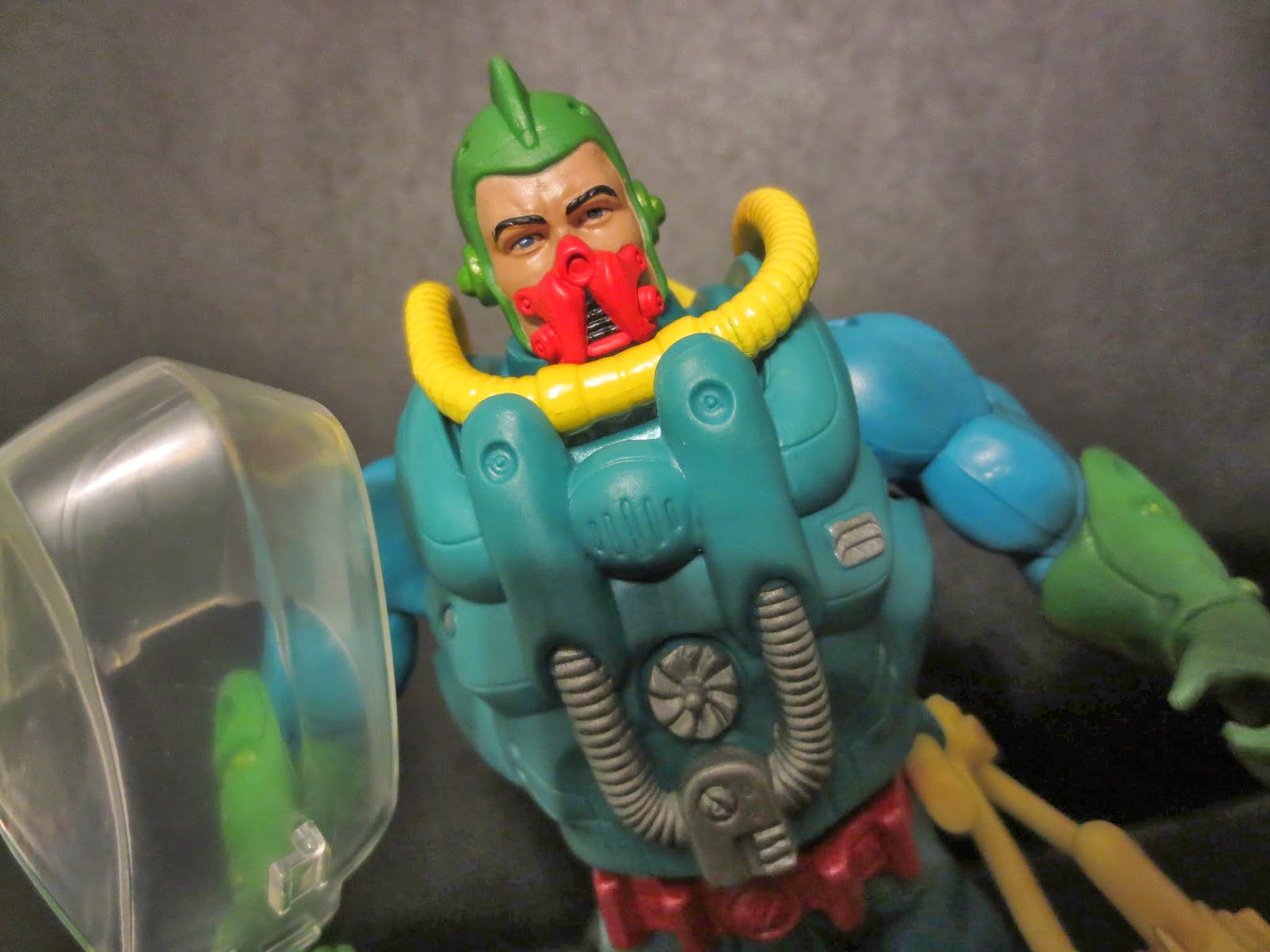 I like Hydron's head sculpt. The green hood with a fin on top really gives off that cool, retro space vibe that I loved so much on Captain Glenn. Honestly, I really wish Mattel had made the respirator a second piece because I'd totally like to see Hydron without it. It's strange that Mattel gave Icarius/Flipshot a second unhelmeted head when his entire face was visible, but Flipshot doesn't get one and his mouth and nose are completely covered. The sculpt and paint on what we got is fantastic, but I really wish a second head had been included. 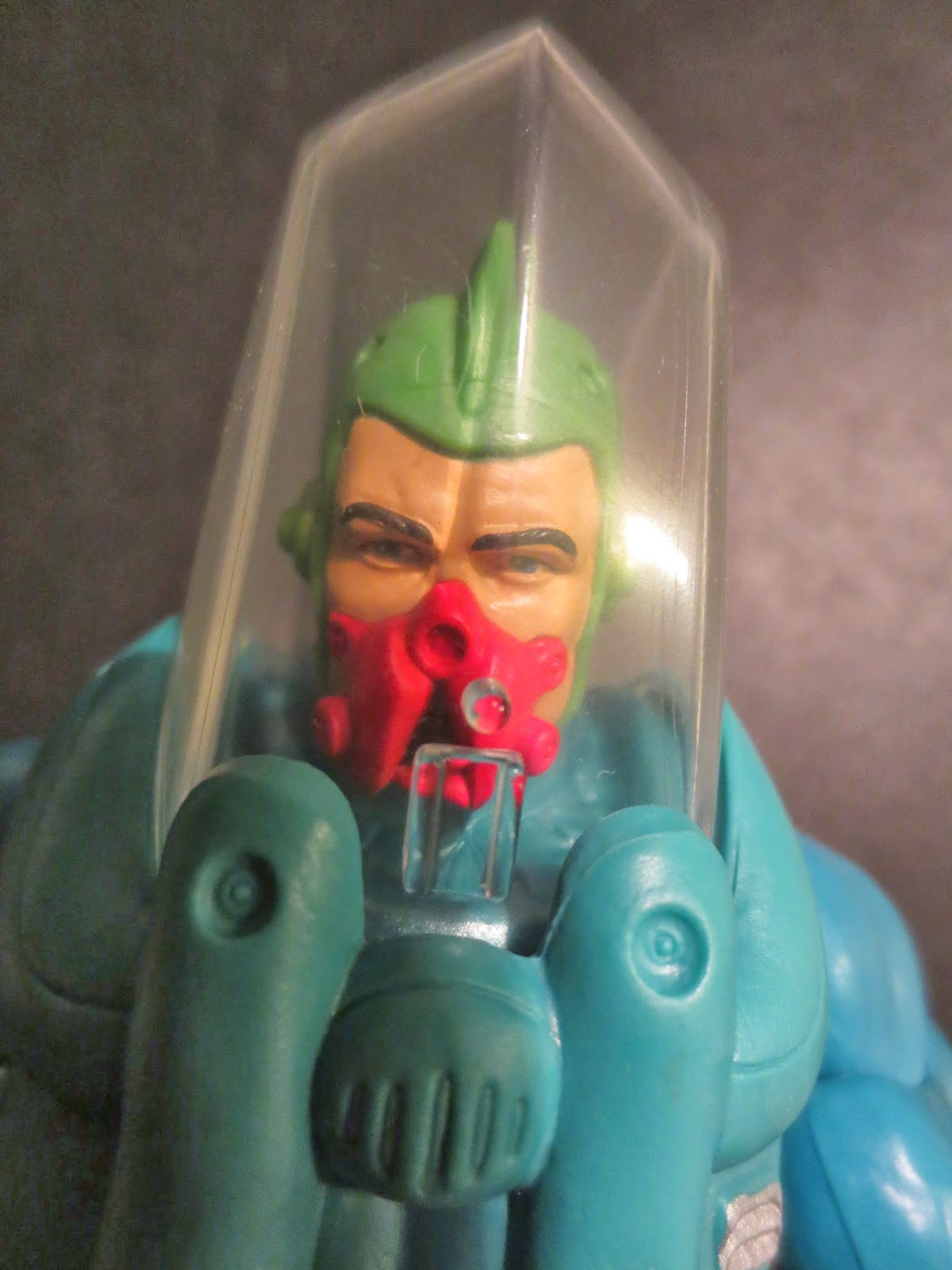 Hydron comes with three accessories (in addition to his armor, which is removable): his diving helmet, a backpack, and his Triton spear gun. The helmet is a pretty simple clear plastic dome that clips down into Hydron's armor. It might be a bit too tall, but it's not horrible. 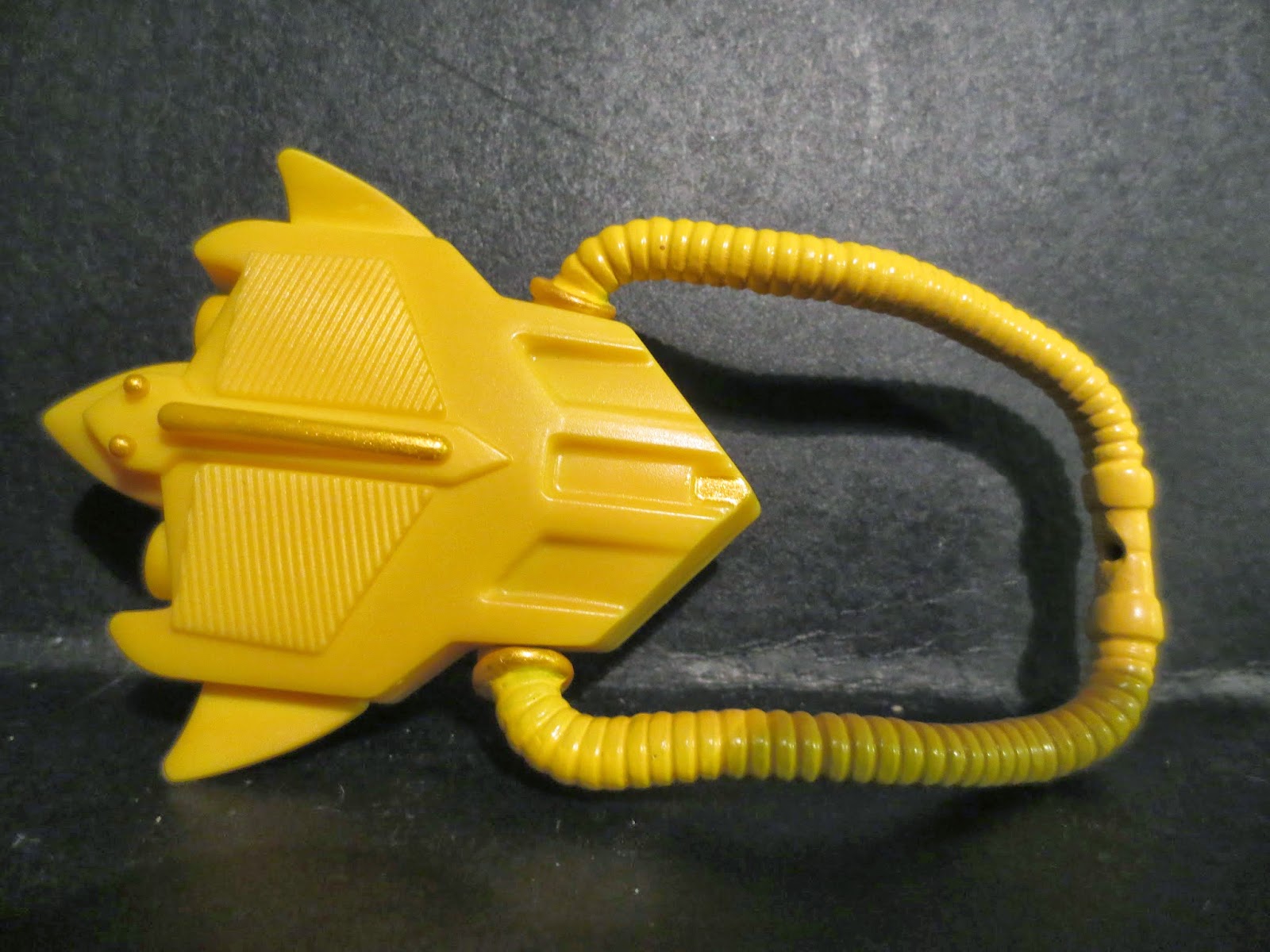 Second is Hydron's backpack. I really like this piece. While the backpack is made from a sturdy, hard plastic the tubes are actually hinged and much softer. There are some cool little details on the back such as little jets to propel Hydron through the water (or space) as well as some more copper colored paint apps to give it a bit more depth. One thing I don't like, however, is the way the air tubes connect to Hydron's dome. The dome has a peg on it which plugs into the tubes. This really further obscures Hydron's head and just looks awkward. I'd prefer it if the tubes hooked up near the top of his armor and not on the dome. Seems like it would make more sense, as well. 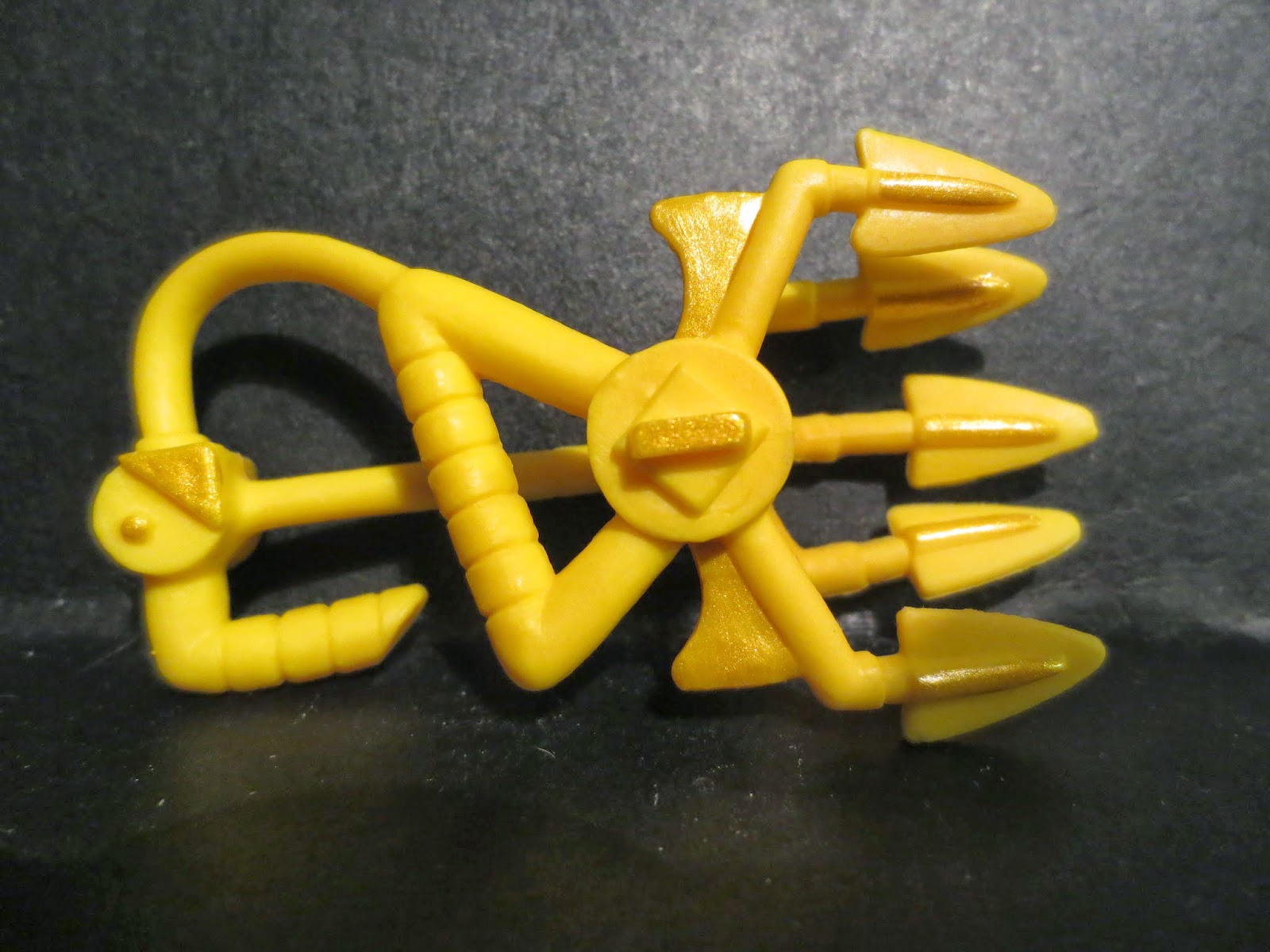 Last, but certainly not least, is Hydron's Triton spear gun. This is a rather unusual accessory that seems to be both a melee weapon and a spear launcher. It has two handles and can be held a few different ways, so pick your poison. I like the metallic paint apps and really don't mind that the weapon is a bit soft. It's definitely not as soft as Modulok's gun. 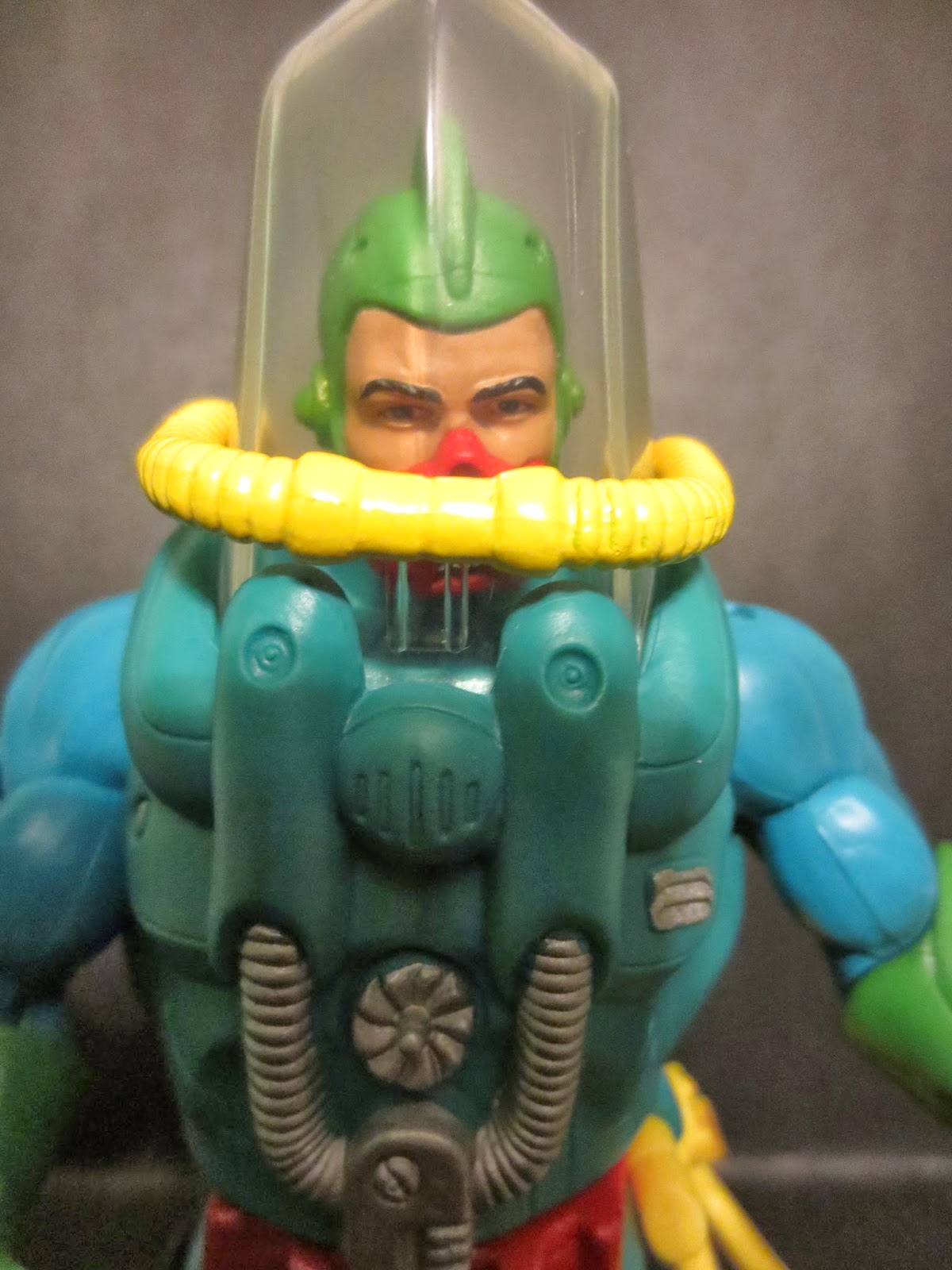 I was really looking forward to Hydron, probably more so than any figure that's been released so far this year. Being a fan of New Adventures and their inclusion in MOTUC, I was really hoping for great things from this guy. I just don't think he compares to previous NA figures in Classics, however. First, the over sized torso armor is really bad. I've not been bothered by any of the previous armors, but this one really just aggravates me. Second, I'm not wild about the way the breathing tubes connect to the dome. I think there was probably a much better option. Last, I'm a little aggravated that Hydron doesn't come with a unmasked head like Flipshot/ Icarius did. Hydron spent way more time on the cartoon without his helmet then with it. Overall, as much as I like the character and New Adventures, I feel like this guy is a pretty bland MOTUC entry. He could have been great, but sadly his multiple faults cause him to sink to the bottom. I'm giving him an Eh and a 1/2.

Interested in a Hydron of your own? Big Bad Toy Store has him in stock now!

Also, check out our other MOTUC reviews: