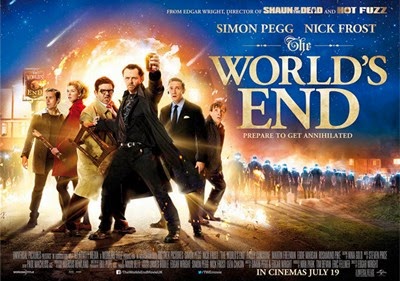 Sometimes you just don't get a chance to go out and see a film you're really itching to see. That happened to me with The World's End last summer. Being a huge fan of Shaun of the Dead and Hot Fuzz (the first two films in director Edgar Wright's loosely related "Three Flavours Cornetto" trilogy) I was anxiously awaiting the release of The World's End but somehow could never find the time to go and see it in theaters. I'm glad I finally picked it up on Blu-ray, though, because it was easily one of the best movies of 2013 and definitely would have ranked in my top ten. It has been almost 10 years since Shaun of the Dead was released (15 years since Spaced!) and the familiar duo of Simon Pegg and Nick Frost are back in a tale that deals with growing older, reconnecting with people from their past, addiction, dusting off old dreams, and the feelings of alienation experienced when revisiting their hometown. And yes, it's also a sci-fi/action/comedy about a pub crawl gone awry. I feel like The World's End really is a film that's better if you go into it knowing as little as possible, so be warned about some spoilers after the break...


Back in his heyday as a fresh young face finishing school, Gary King (Simon Pegg) was truly the king of his hometown of Newton Haven. He and his four best mates owned their hometown and truly made the most out of their youth, even attempting an infamous pub crawl called the "Golden Mile." Consisting of 12 pubs and 12 pints, ending at the pub The World's End, the gang's first attempt at the Golden Mile ended in failure, and soon after they all went their own ways. Now in his early 40s, wearing the same clothes and driving the same car, Gary shows back up in the lives of his friends Andy (Nick Frost), Steven (Paddy Considine), Oliver (Martin Freeman), and Peter (Eddie Marsan), asking them to return with him to Newton Haven to reattempt the "Golden Mile." Reluctantly they agree and make the trek to Newton Haven, but just as the night begins to get fun and Oliver's sister, Sam (Rosamund Pike), reignites some old flames, a few problems begin to rear their heads. What has happened to Gary over the past 20 some years? Why doesn't anyone in their hometown remember them? Is their something more sinister at work in Newton Haven than the simple feelings of being alienated from their roots?

Wright's a fantastic director, directs an impeccable cast, and has a strong script that he and Pegg co-wrote, so it's no surprise that The World's End just ends up being an amazing film. Wright and his cast can balance comedy, emotion, and the genre staples of their films better than anyone else in the business, and The World's End might be their finest film (I might personally prefer Hot Fuzz, though). While it's a comedy (and a wildly funny one at that), the film never relies on cheap laughs if it undermines the character development or plot of the film. The characters and their interactions are genuniely hilarious with the humor flowing out of the increasingly bizarre situations that the members f the crew find themselves in. The chemistry is perfect in this group, particularly as seen in the strained friendship between Gary and Andy. The film brilliantly juxtaposes Gary's obsession with completing the pub crawl amidst what ultimately becomes a story of survival during an alien invasion. Gary's dedication is simultaneously absurd, meaningful, and sad in it's singular focus.

With The World's End, Wright and crew have made an alien invasion film that manages to be better than any other in recent memory while still keeping the focus on a coming of middle-age story; you really can't go home, but you can still connect (or reconnect) with those whom you have loved in the past. Just because life can never be the same as it was doesn't mean it can't be wonderful, no matter what craziness has transpired. This is a fantastic film that delivers both laughs and thrills, leaving you with something to think about, particularly if you've hit a point in life where you've realized that your hometown is no longer a central part of your universe.