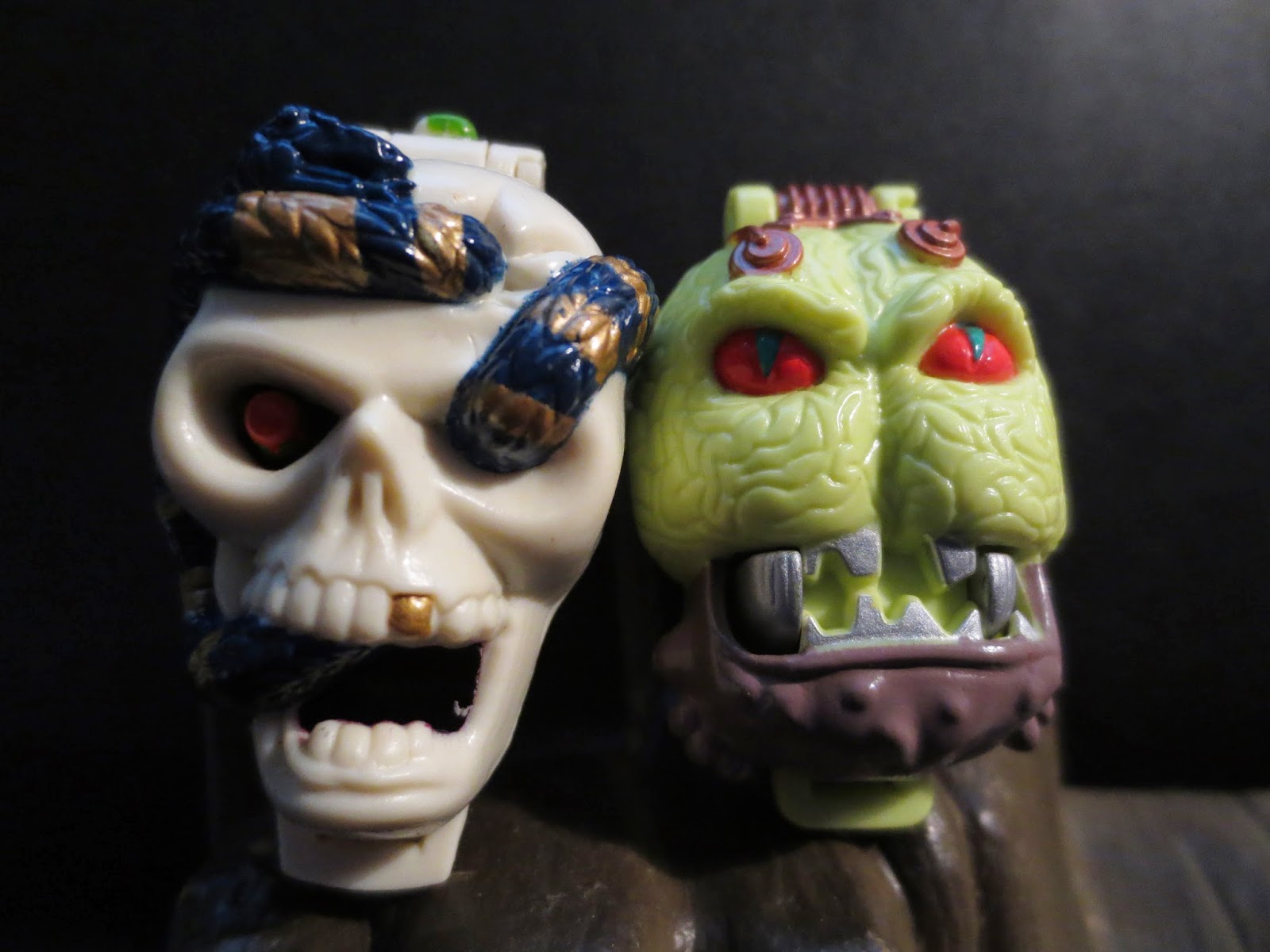 Sorry about missing Micro Monday last week, everyone.  I had some stuff going on over the weekend and just didn't feel like sitting down to work on a review. Fortunately, I've had plenty of time this weekend to work. Once again, we're going super micro this week with a look at two more of the Shrunken Heads from Mighty Max: Brain Face and Wraptile. Both of these are from my original childhood Mighty Max collection and came packaged together (these sets were sold by themselves and in pairs). Some folks think I may have been a bit harsh on these Shrunken Heads sets when I reviewed a pair of them last time. They might have been right; these were never intended to be full fledged playsets like the Mighty Max Horror Heads or Doom Zones. These really seemed more like a way to get kids cooler Max figures. Anyways, ready for a look at Brain Face and Wraptile? Then join me after the break....


These Shrunken Heads are really small, much smaller than even the Horror Heads. These sets are between 1 1/2 and 1 3/4 inches long and are only around an inch wide. While the sets opens up like their larger brethren, they only come with one figure each: a unique Max figure. While most sets used randomly inserted Max figures, the Shrunken Heads and the Monster Heads had Max figures that were specific to each set. 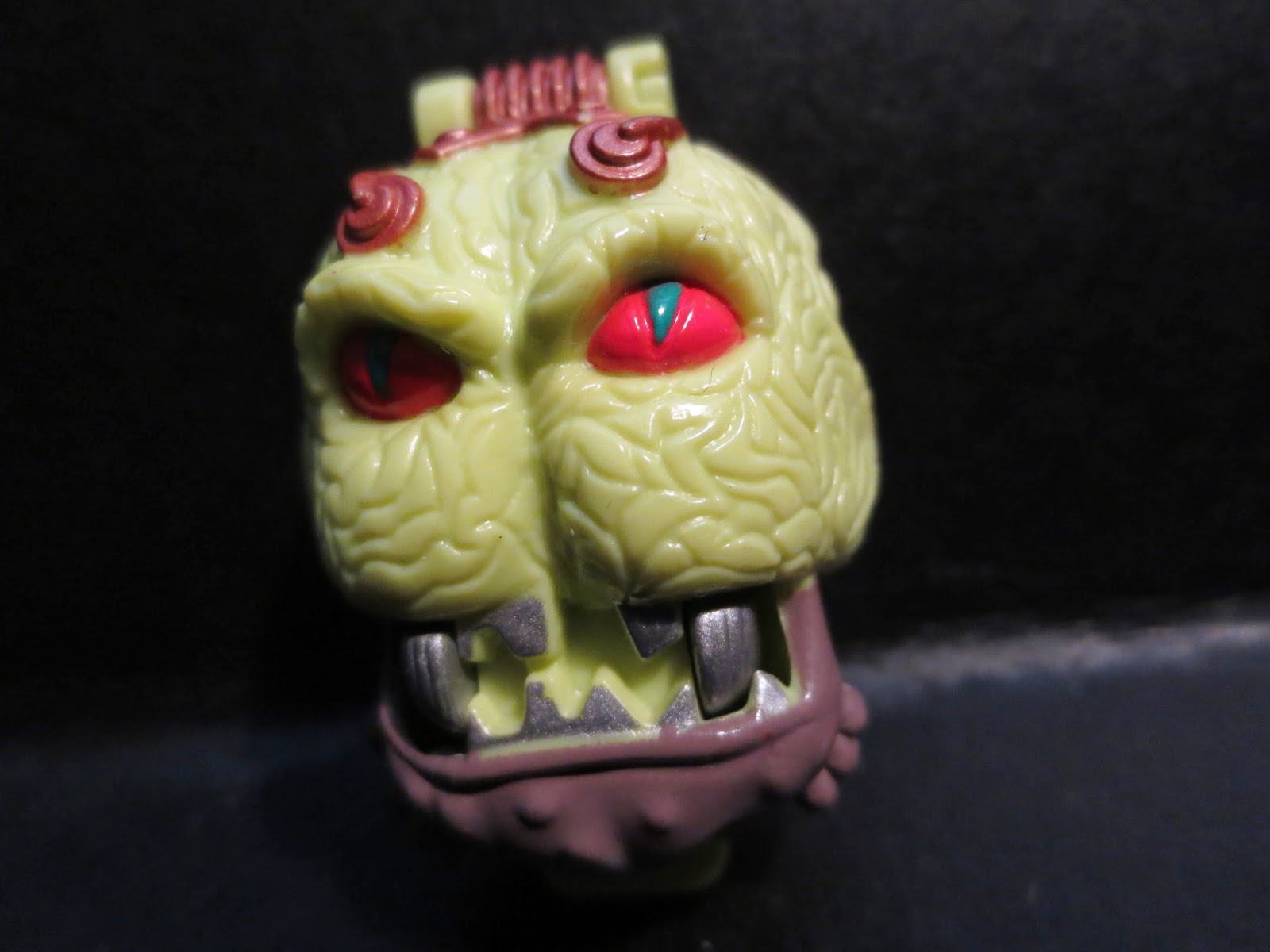 Let's start with Brain Face. Surprisingly, his face kind of looks like a brain. He's a wrinkly faced green alien with a strange, possibly mechanical jaw. In some respects, he somewhat resembles Trap Jaw from Masters of the Universe. The pruney pattern on his face is quite impressive and the details like his blood red eyes, uneven, jagged metal teeth, and the electrodes attached to his forehead are rather impressive. 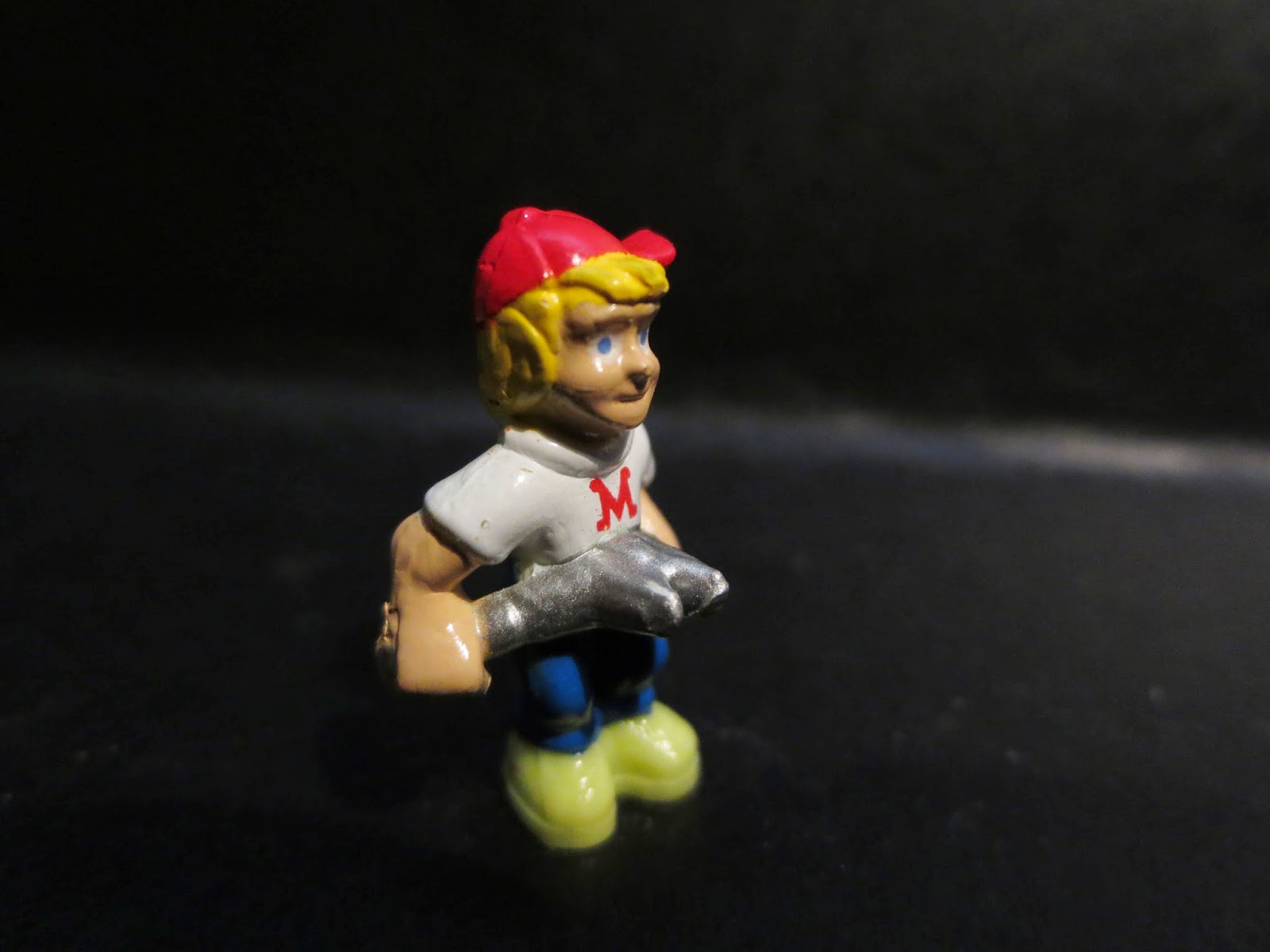 The included Max figure is a pretty basic looking "teenage" Max with the standard outfit. Well, except that he's wearing yellowish-green tennis shoes. They're the same color as Brain Face's face. He's also holding a pair of some sort of hedge clippers. They're silver and surprisingly, you can actually see the ends of the handles painted on the bottoms of Max's hands, as if they're protruding a bit from his grip. That's an impressive little detail. 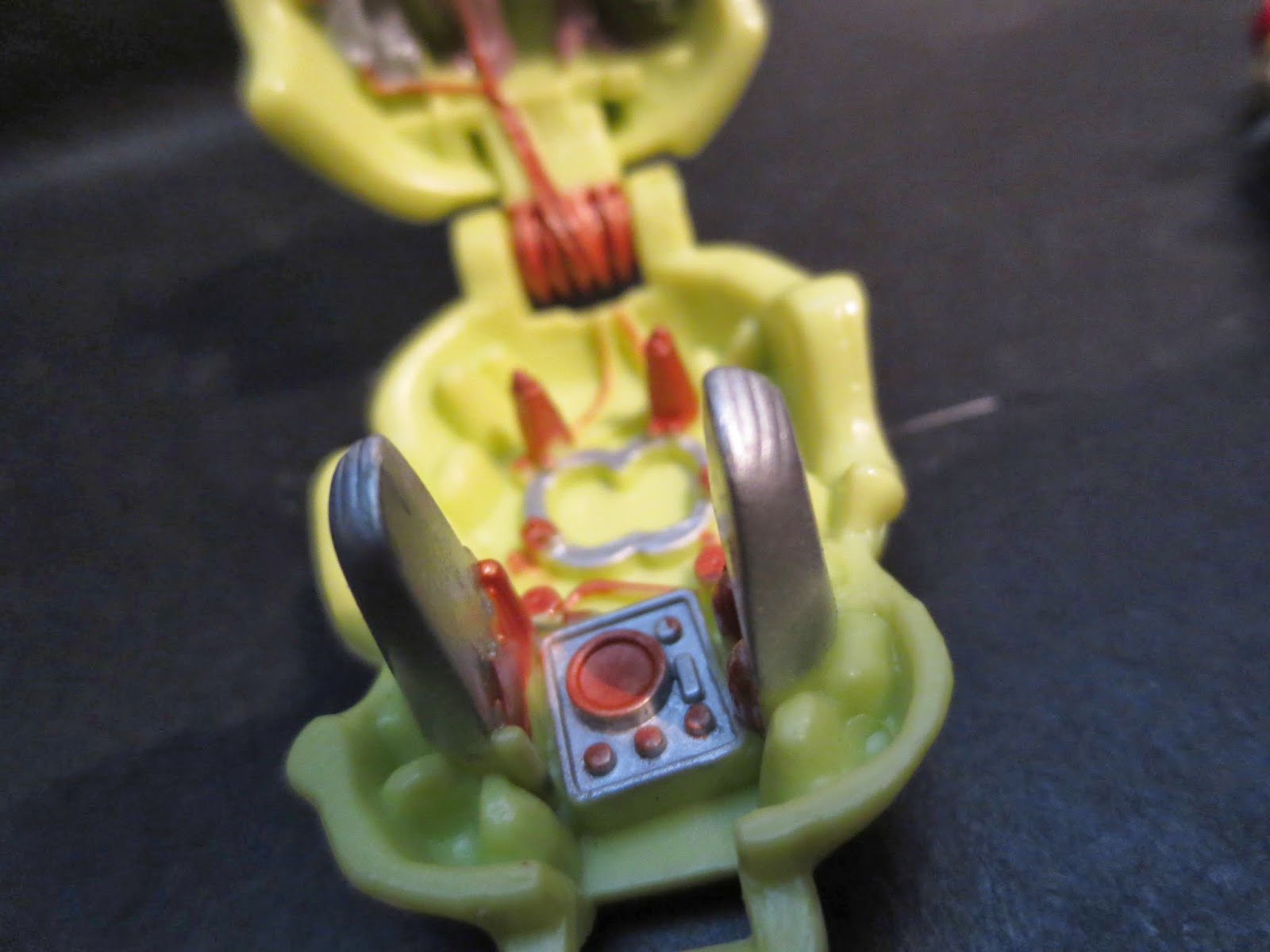 The base of the set looks like the interior of some sort of cave (although it's inexplicably yellow-green) with two metal poles that kind of look like those space gates from Phantasm. There's lots of copper wiring strewn about and a footprint for Max to stand in when he faces.... 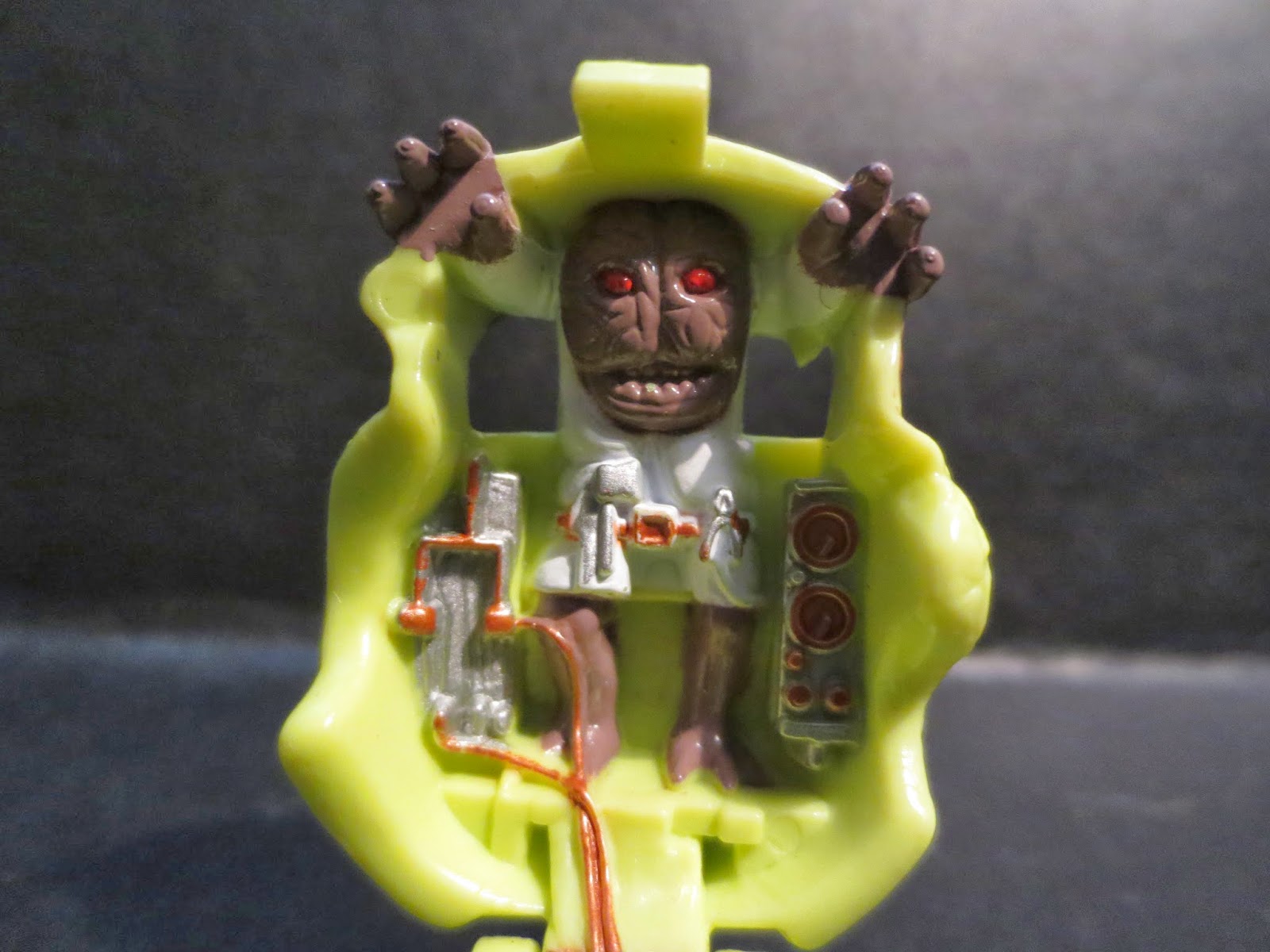 Brain Face!!! He doesn't look as cool as he does on the case of the set, but he's not bad. He kind of looks like a Critter or something. He's wearing a white lab coat and has little tools on his belt such as a small axe and some pliers. He too is surrounded by machinery and copper wires. I'm guessing the gist of the set is that Max has to stop him by clipping the wires. That's pretty cool. Maybe Max cuts the right wire and ends up frying the guy. 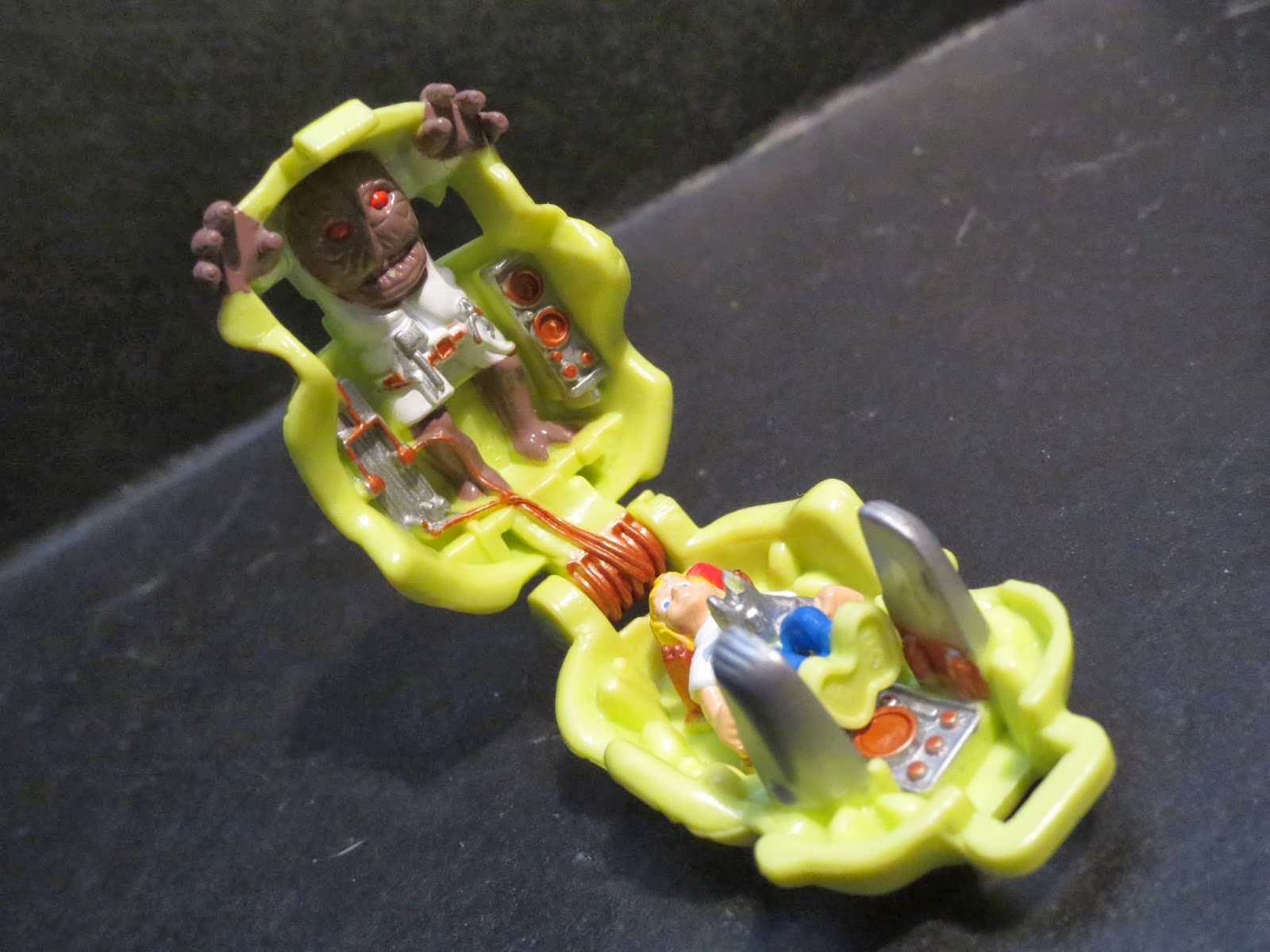 To close the set for storage, Max lies flat on his back with his head between two small copper colored pylons and his feet between the space gate. The tops of the space gate actually form the two larger teeth for the Brain Face case while Brain Face's little hands form the bizarre little protrusions on the bottom of his jaw. Now you're ready to sneak this set into shop class! 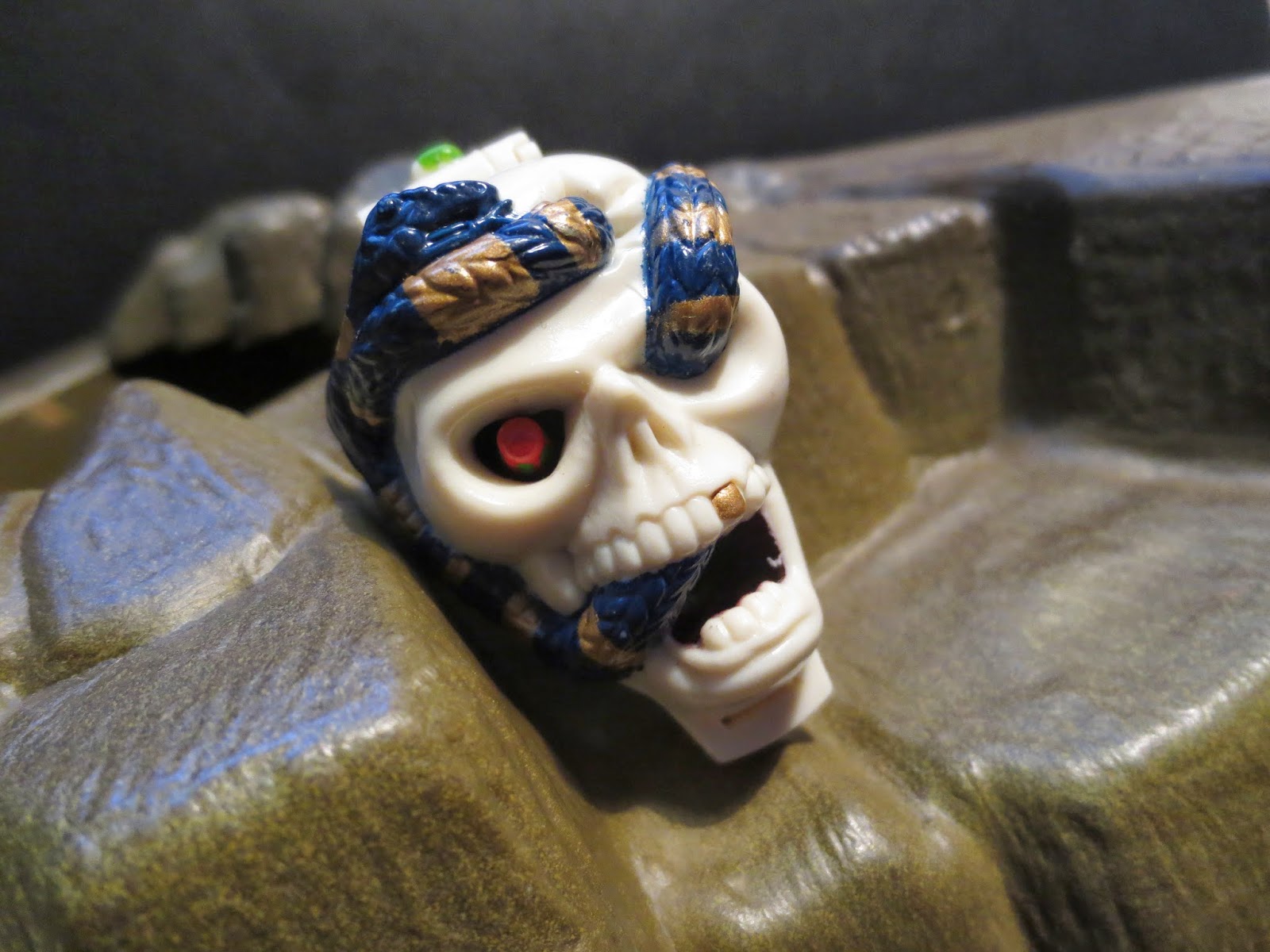 Wraptile also has a pretty cool exterior. It's a skull with a blue and gold snake crawling through the mouth, left eye socket, and a crack in the forehead. The skull also has a gold tooth and a blood red eye. I love the color and the paintwork here. For some reason, the skull reminds me of those white chocolate skulls they used to sell that were filled with a red candy jelly or something. That was back in the 80's sometime. Anyways, the detail here is quite nice. 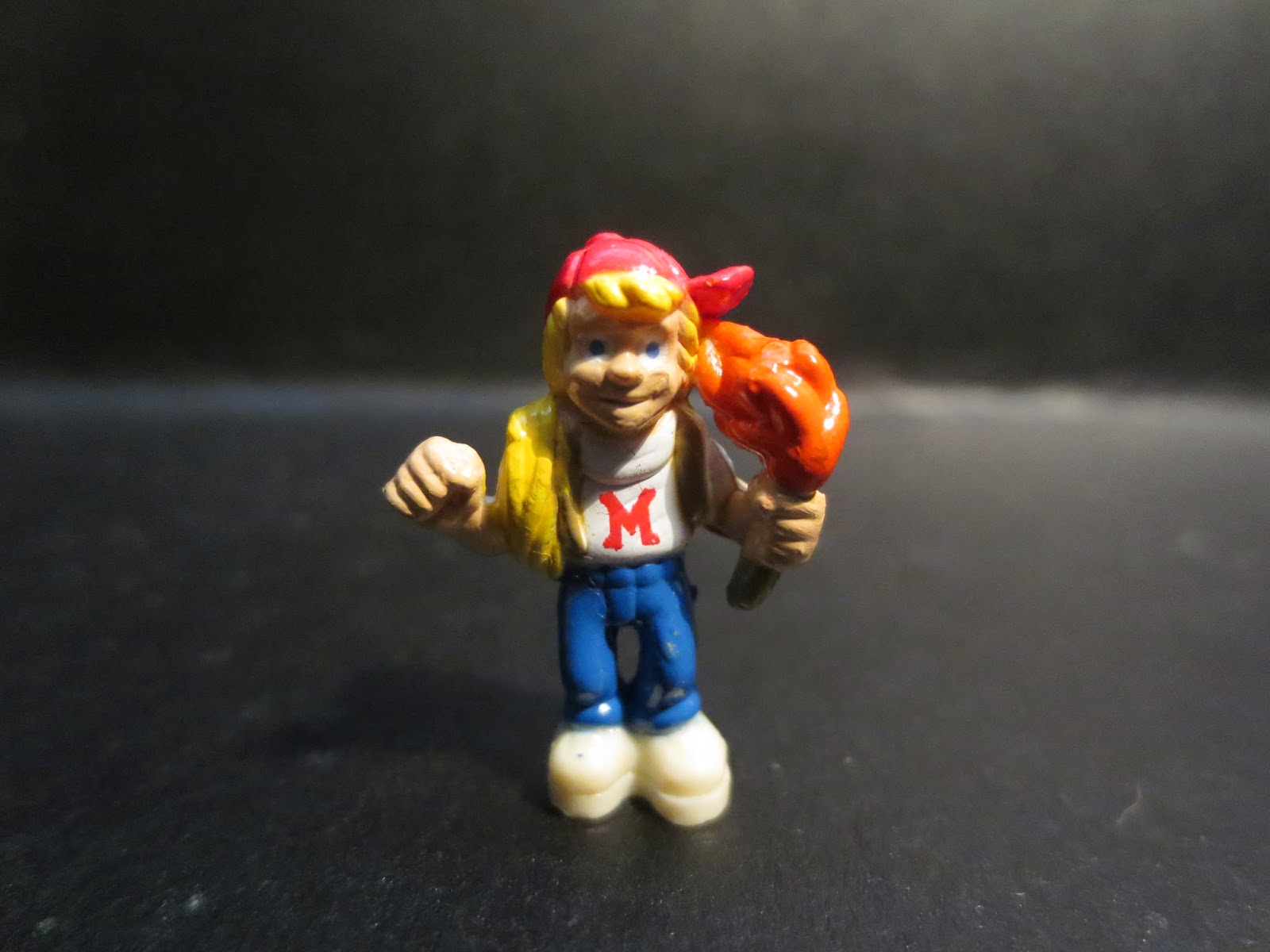 Once again, inside is another "teenage" Max figure, only this time he's wearing a small brown backpack and has a coil of yellow rope around his right shoulder. He's also carrying a torch that seems to be lighting his face on fire. Max knows that the only thing snakes hate more than mongooses is burning flesh! 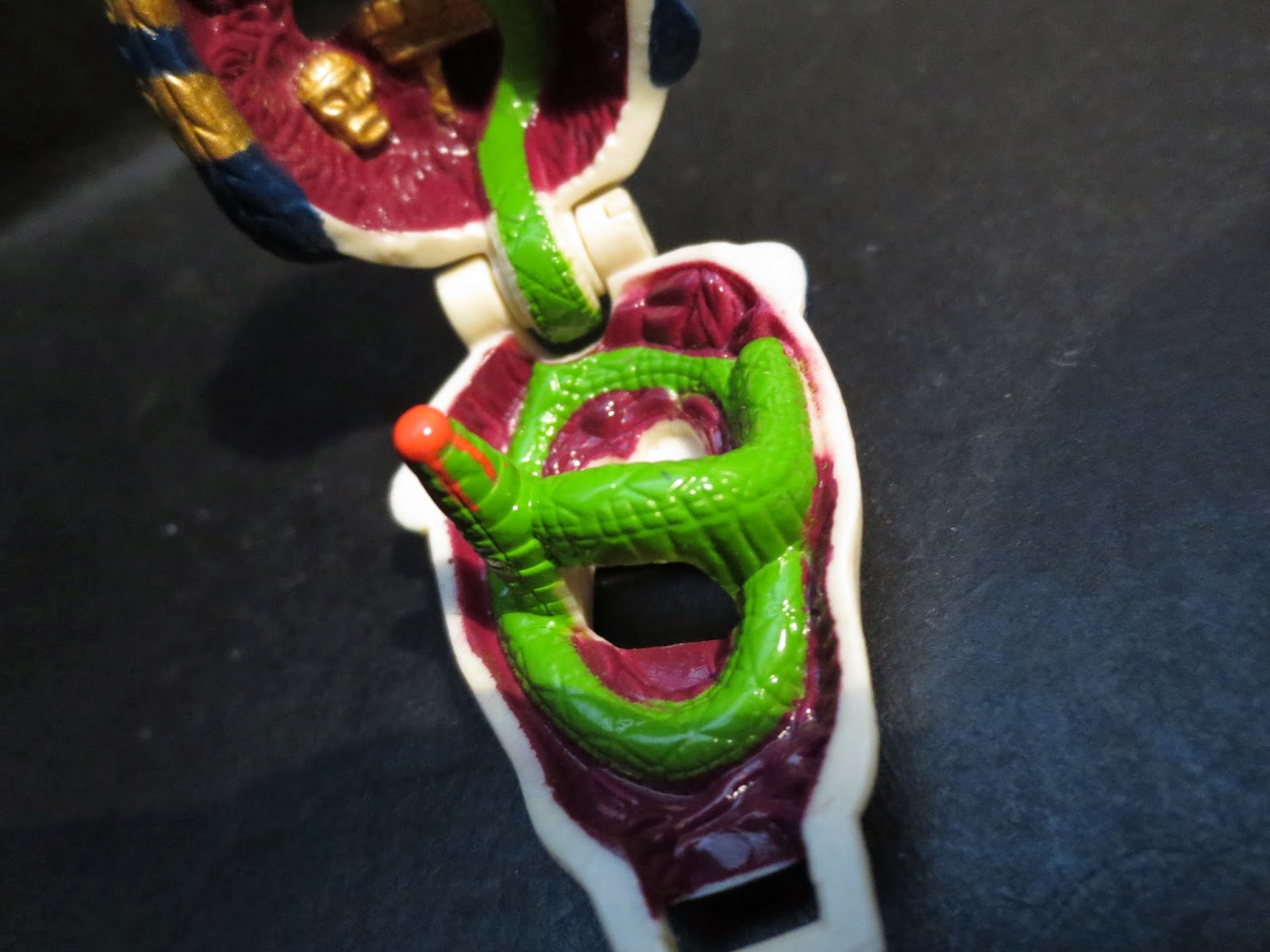 The interior of this set is another cavern interior although this time it is filled with a giant green cobra! The head of the snake sits at the top of the set while the snake's tail coils around in the bottom of the base. There's a footprint for Max although he can also be slid under the snake's tail. For some inexplicable reason the snake's tail is bleeding. Did Max slice it off or something? Looking at it closer, while the small green pillar is the same color as the snake, the sculpt is different. Maybe this is just a random stalagmite covered with blood? 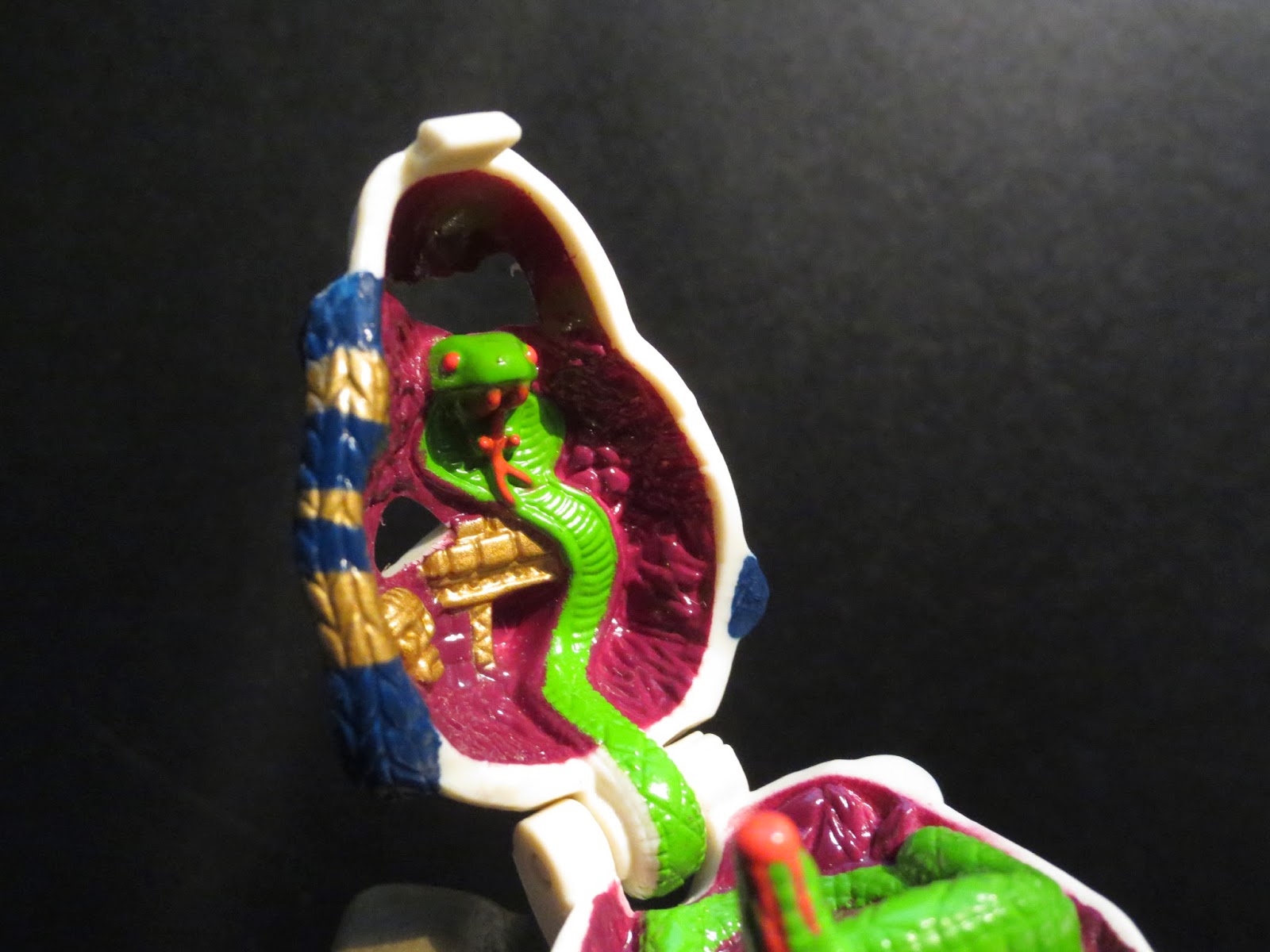 The giant snake looks a little silly, but that's often par for the course with these guys. He does have some wicked cool treasure behind him, though. There's a golden mask and a golden...uh..coffee table? Keyboard on a stand? Xylophone? I'm actually not sure what the heck that thing is, but it's gold so it must be valuable. 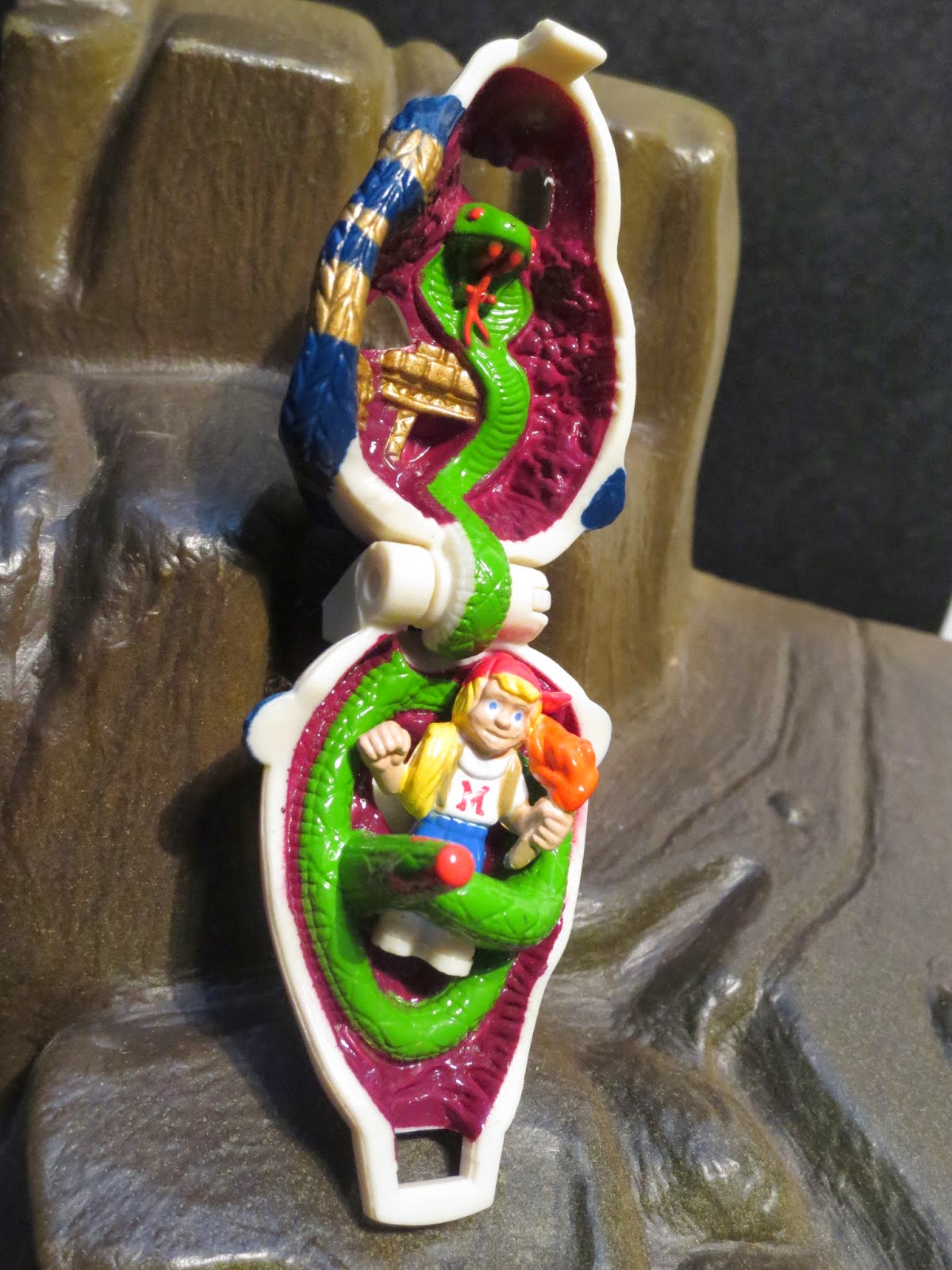 To store the set, Max slides under the snake's tail. The tip of the green stalagmite or the blood snake's tail makes up the red right eye of the skull on the set's exterior case. Now you're ready to sneak this thing in to your favorite Goth club. 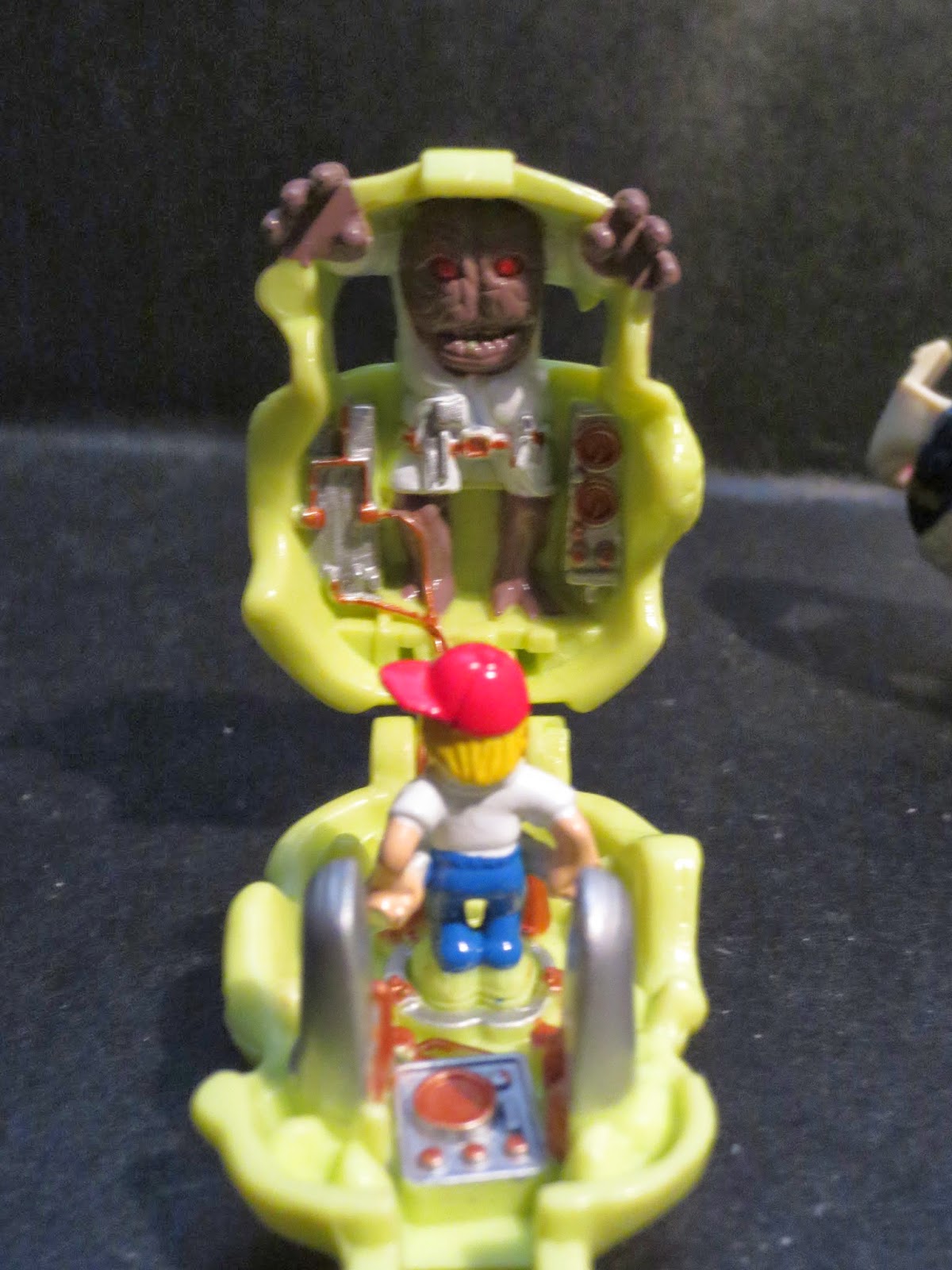 I like both of these sets a lot better than Rat Trap and Vampyre. Both the exteriors and interiors look better. These are still pretty limited, but if you wanted more Max figures for you other sets that featured better weapons and gear, these were a decent buy. They also just weren't very expensive when they were released. Overall, I'm giving them a Good. They certainly aren't the best Mighty Max sets to buy if you're wanting to get acquainted with the line, but they're a fun curiosity for collectors looking to expand their Mighty Max collection.

Micro Monday keeps on going! John at The Clawful Punch actually reviewed Wraptile back in February and I've reviewed plenty of other sets here at ThEpic Review: