Movie Review: The Beyond (AKA Seven Doors of Death) 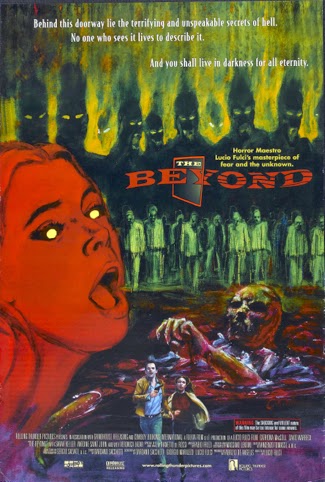 The Beyond (also released as Seven Doors of Death) has been praised by some horror fans as director Lucio Fulci's masterpiece. Combining his more sinister, arcane tales of the occult and portals to Hell with his more popular zombie films, The Beyond manages to be just as creepy and disturbing as it is gory. And let me warn you, The Beyond is gory. We're talking grindhouse style eyeballs removed from eye sockets and people being eaten bite by bite by spiders gory. We're talking dogs eating blind people and people getting melted by acid. This is the kind of film that will make you sit there and both quiver and shiver (most films opt for either one or the other!) until the very last frame. Ready for a brief look at 1981's The Beyond? Then join me after the break...

Set in Louisiana, the film opens in 1927 as we witness the brutal murder of an artist named Schewick at the Seven Doors Hotel. Scheweick is whipped, crucified, and melted with some sort of acid by the locals. Years later, Liza Merril (Catriona MacColl) moves from New York to Louisiana after she learns that she has inherited the somewhat run down hotel. Intent on opening the hotel, Liza moves forward with renovations even after two tragic accidents involving a roofer and a plumber. As the renovations continue, stranger and stranger events continue to happen and Liza begins to realize that her inheritance has more problems than a flood basement and faulty wiring. Strange visions, terrible revenants, and a mysterious book called the Book of Eibon (a nice Lovecraft nod) begin to reveal that the hotel itself houses a portal to Hell which has been disturbed.

Prior to watching this film the only Lucio Fulci film I had seen was Zombi 2, but let me say that I now plan to try and watch more of his stuff as I'm impressed by what I've seen so far.  While it sounds like I've mostly focusing on the gore, I do want to emphasize that this is a really well rounded horror film. It has a fantastic cast, an excellent soundtrack that is bizarrely wonderful, and an atmosphere that just perfect in contributing to the sense of impending doom that we know is inevitable. Fulci's trademark closeup shots brilliantly capture every stomach churning death, every sinister omen, and every look of intense terror. As you watch the movie, pay attention to how much Fulci focuses on the eyes of the characters. Not only do we see closeups of the characters' eyes to help us understand them, but eyes and sight are a central theme of the film. When characters are attacked, often it is their eyes that are targeted. When we initially introduced to the evil presence lurking in the Seven Doors Hotel, it is a glimpse of eyes. One of the most haunting characters is a young blind woman, an almost prophetic figure who attempts to intervene in the film's tragic events. Watching The Beyond, you'll either find your own eyes intensely glued to the screen or covered by your hands as you turn away from the horrors this film has to offer. Give it a try and see how you fare with your visit to the Seven Doors Hotel.