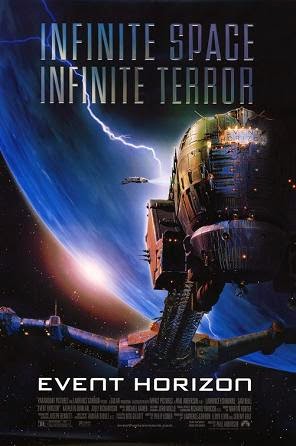 A week or two ago I watched Event Horizon, a film I hadn't seen since it was released on VHS in 1998. Starring Laurence Fishburne, Sam Neil, and Joely Richardson and directed by Paul W.S. Anderson,  Event Horizon is a sci-fi/ Horror film released in 1997 that was originally both a commercial and critical failure. While initially being largely dismissed, over time many viewers and genre fans have reappreaised the film. While I don't remember being overly impressed with the movie the first time I saw it, watching it again was a chilling experience. Unlike most sci-fi horror films that tend to deal with alien creatures, Event Horizon rather is a ghost story and a possession tale that takes place in a sci-fi setting. Imagine something along the lines of Alien and the Black Hole blended with In the Mouth of Madness and Hellraiser. If that sounds at all appealing to you, you might want to read on after the break to learn more about Event Horizon.....

In the year 2047, the rescue ship Lewis and Clark is traveling towards Neptune to answer a distress call from the Event Horizon, a massive, experimental space vessel that disappeared seven years earlier. Joining Captain Miller (Laurence Fishburne) and his crew is Dr. William Weir (Sam Neil), the designer of the Event Horizon. Weir informs the crew that the ship wasn't just a standard research vessel but was in fact an experimental vessel that created artifical black holes in order to expedite space travel between two distinct points. Upon reaching the Event Horizon, the Lewis and Clark finds far more questions than answers: What happened to the original crew? What is causing problems with their own  ship? Why are their disturbing messages and videos in all of the ship's recordings? Most important, perhaps, is the question of where has the ship been these past seven years and what has come onboard during that time? Unfortunately for the crew of the Lewis and Clark, many of these questions will be answered as they race against time to repair their ship and escape from the Event Horizon.

The primary strength of Event Horizon is the atmosphere of dread and mystery it creates. If you're watching this film for the first time, I'm not sure that you'd have any way of knowing what to expect (you know, unless you're reading this review). While the film definitely could be classified as fitting into the patterns of a psychological horror film, there's also a bloody and visceral quality to it. Not only is the crew struggling against an unseen entity, but they struggle against both themselves and against time and technology as they race to repair their own ship. There's an interesting dichotomy between the ship designs for the Event Horizon and the Lewis and Clark as well that really contributes to the atmosphere in the film. While the Lewis and Clark feels like your standard "lived-in universe" spaceship (think the Nostromo or the Millennium Falcon), the Event Horizon manages to feel alien while still being of huma design. Many of the design cues almost seem to be more fitting for an ancient temple or a place of worship than a spaceship or research vessel. As the crew crosses over to the Event Horizon, we cross over into a world where the standard dangers of space seem far less threatening than the unknown.

The film holds up quite well, particularly the visual effects. Other than an obviously CGI opening scene that shows random objects floating in zero gravity, the rest of the effects are quite impressive with a nice mix of traditional and digital effects, many of which are quite disturbing. Perhaps most disturbing are some of the random scenes from the ship's computer banks that seem to just flash images of violent, bloody orgies. These scenes are so quick that you'll see little of anything that you can recognize, but they manage to make a profoundly disturbing impression due to their brevity. Looking back, the late 90's had a fair number of interesting, big budget science fiction films that many viewers rarely seemed to give more than a second thought, but Event Horizon definitely warrants a viewing. While it doesn't fully live up to its intrguing premise and perhaps drags a little bit (sometimes drifting into utter nonsense), it's still a film that horror fans should try.