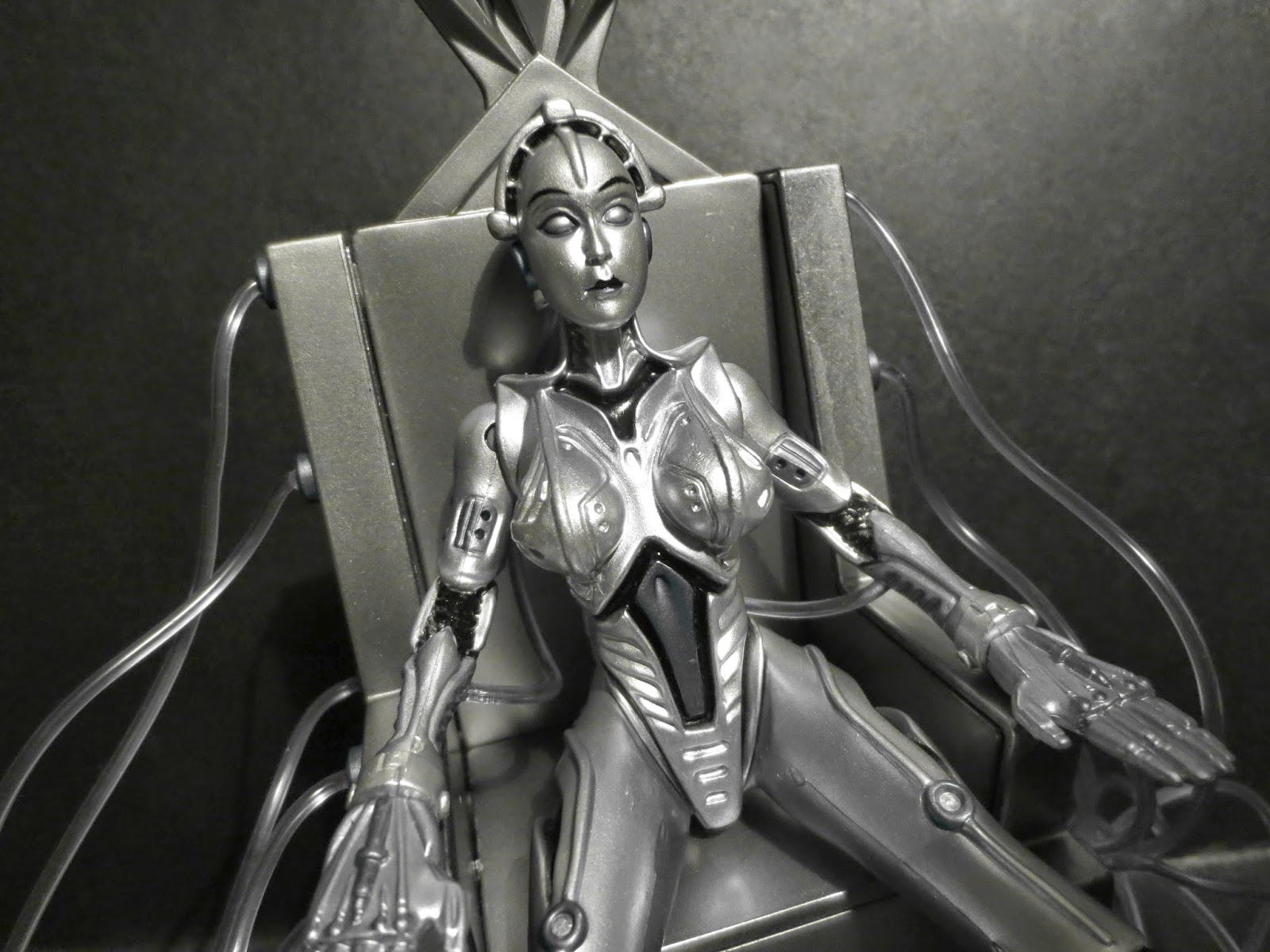 One of my favorite toylines of the 2000's is Silent Screamers, a series of awesomely sculpted action figures inspired by various characters and creatures from silent horror films.While the first series of action figures was released by Aztech Toyz in 2000, the second series was released by the then newly formed Mezco Toys in 2001. Taking a cue from McFarlane's successful Movie Maniacs toyline, Aztech and Mezco also based their toyline on a variety of different horror properties, only favoring then public domain works versus licensed properties. For quite a few years my line has been almost complete, but just a few weeks ago John over at The Clawful Punch helped me to finally complete my Silent Screamers set by hooking me up with the subject of today's review, Maria from the 1927 film Metropolis! Thanks, John! Surprisingly, I actually haven't seen Fritz Lang's Metropolis, so I guess that's something I'll have to put on my to do list. In the meantime, let's check out this figure, shall we? 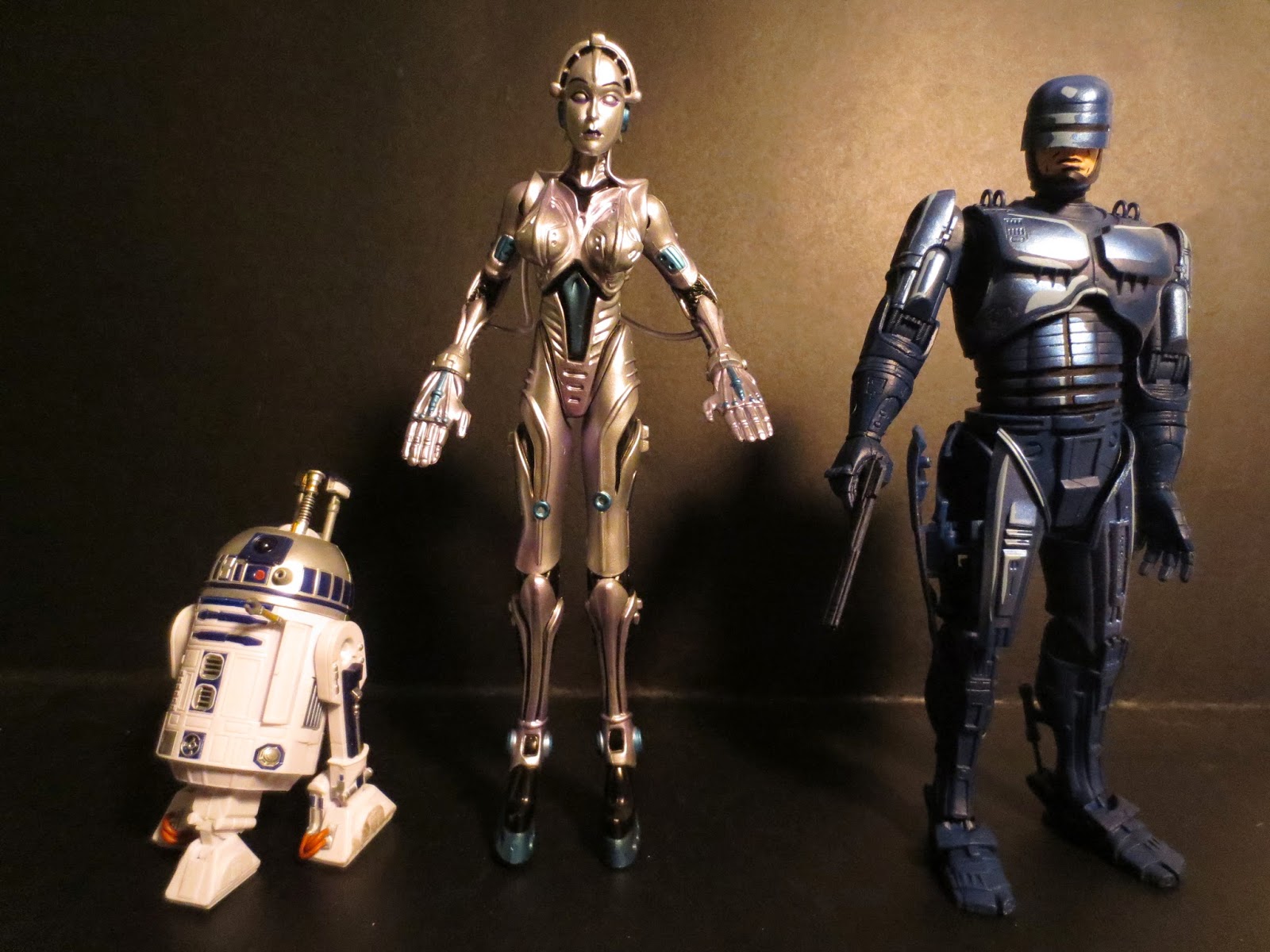 Maria was released as part of series two of Silent Screamers alongside other silent cinema icons such as Edison's 1910 Frankenstein, Dr. Jekyll and Mr. Hide, and a deluxe boxed Golem. While these figures are based off of their film counterparts, they are not directly modeled after them. Anyone familiar with Mezco's style knows that they tend to favor a slightly caricatured style which really looks fantastic here. Due to her funky platform heels, Maria stands about 7 5/8th inches tall which makes her quite a bit larger than many other horror figures, but since she's a robot the size is less of an issue. 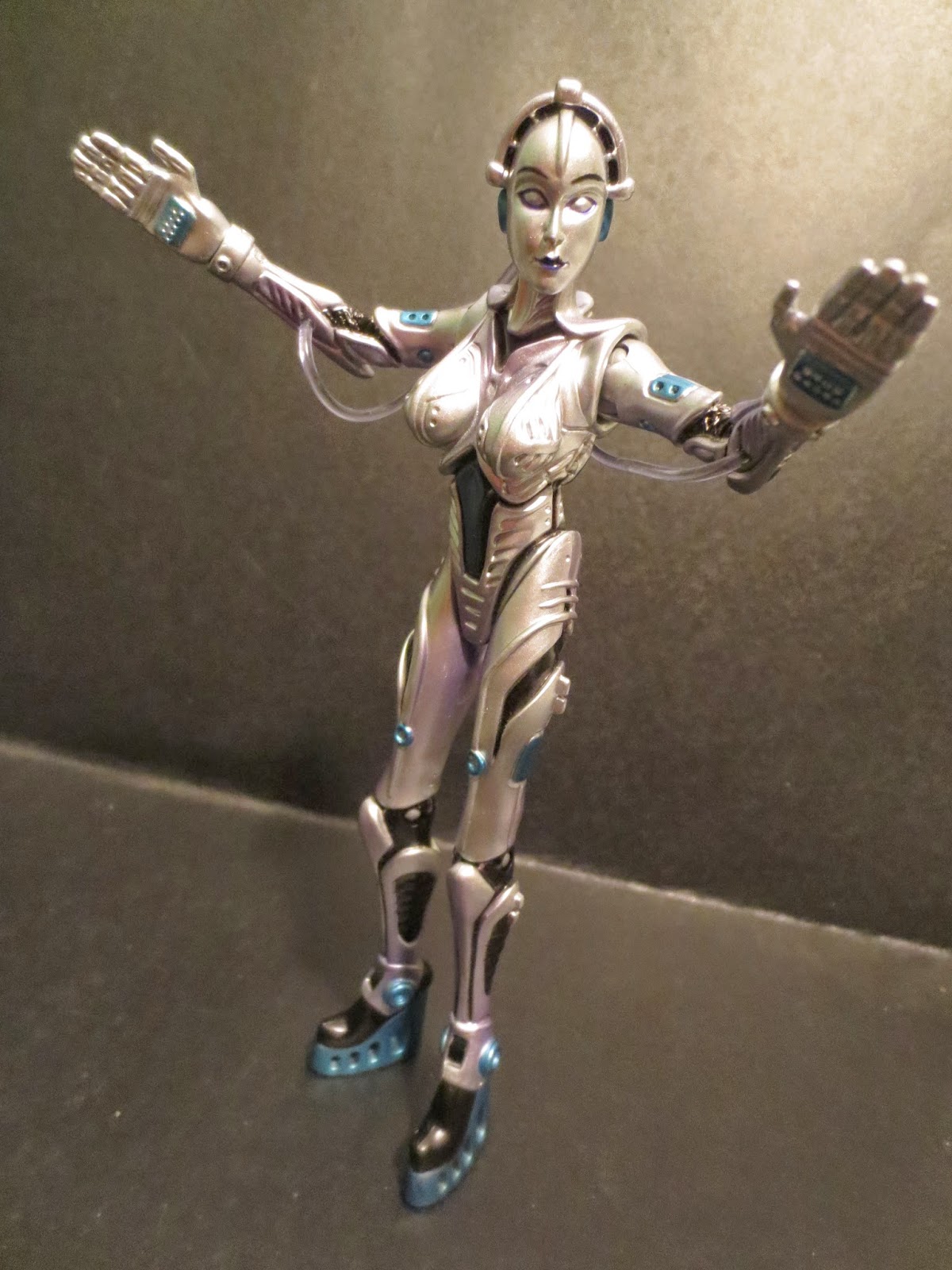 Maria isn't well-articulated by today's standards but by the standards of 2001 I believe she would have been considered average. She features: swivel/hinge knees, swivel hips, swivel/hinge shoulders, swivel wrists, and a swivel head. Everything is solid and durable, which is always welcome, and while Maria is a bit limited in her posing options, she does sit very well. Yeah, sitting isn't typically the default action pose for most action figures, but when your main accessory is a giant chair sitting is important.  A ball jointed head would have been welcome, though, but when she's sitting on her mechanical throne, Maria truly looks perfect! 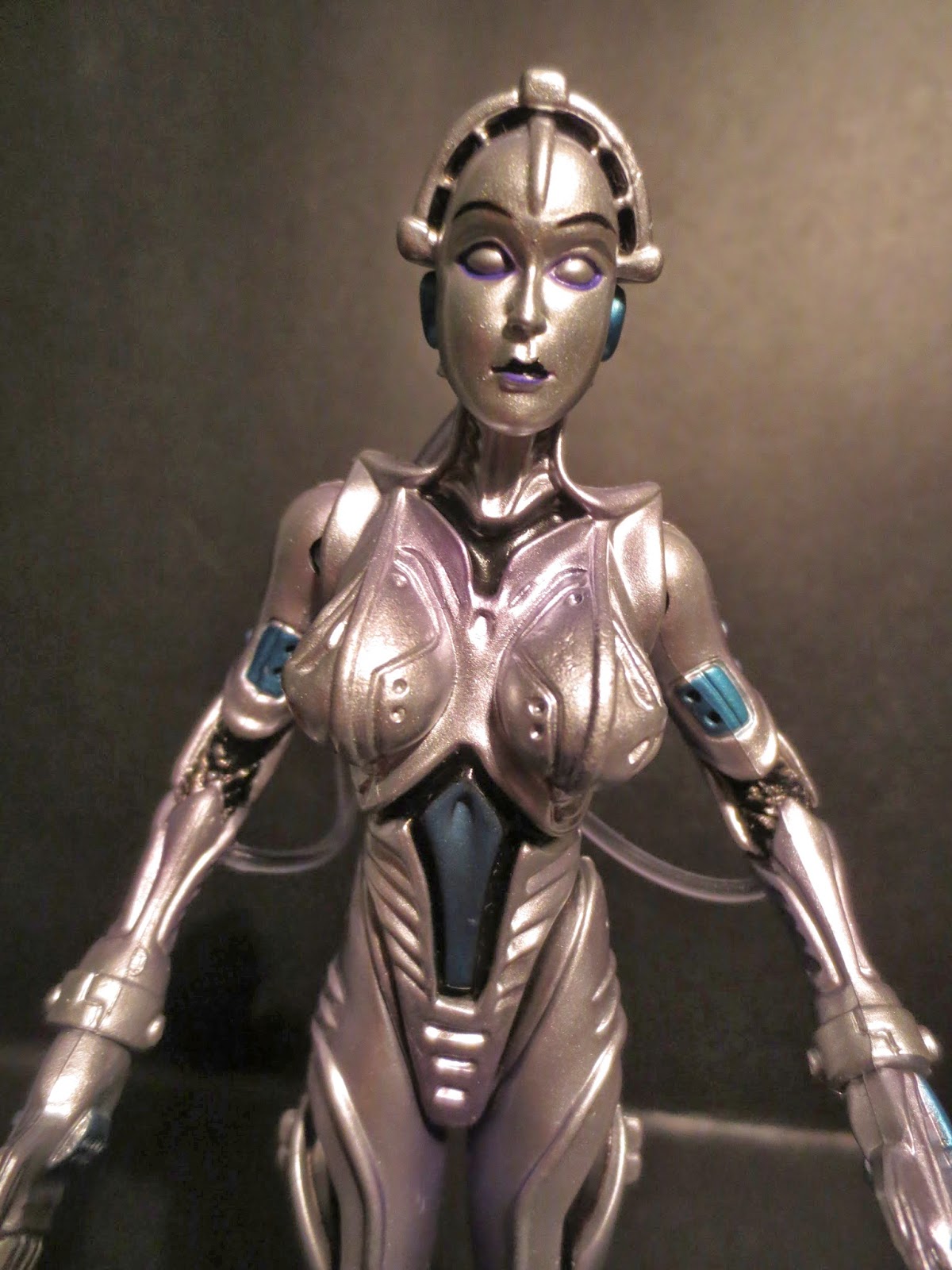 The sculpt is beautiful! You can tell that Mezco tried to capture the clean lines and rounded elements that defined Maria's futuristic appearance in the German expressionist film, but they went a bit further to add a level of detail that was comparable to the toys of the early millennium. While Maria has a cold, lifeless appearance due to her face and posture, the aesthetics of her body actually are quite seductive. Blending the female form with a machine, Mezco's sculpt captures a conflicting image of an element of technology that somehow manages to also seem sexual and alluring. Little details such as the panels on her palms, the soft, translucent tubes running from her head to her forearms, and the textured elements that appear between her body panels really make Maria a work of art. 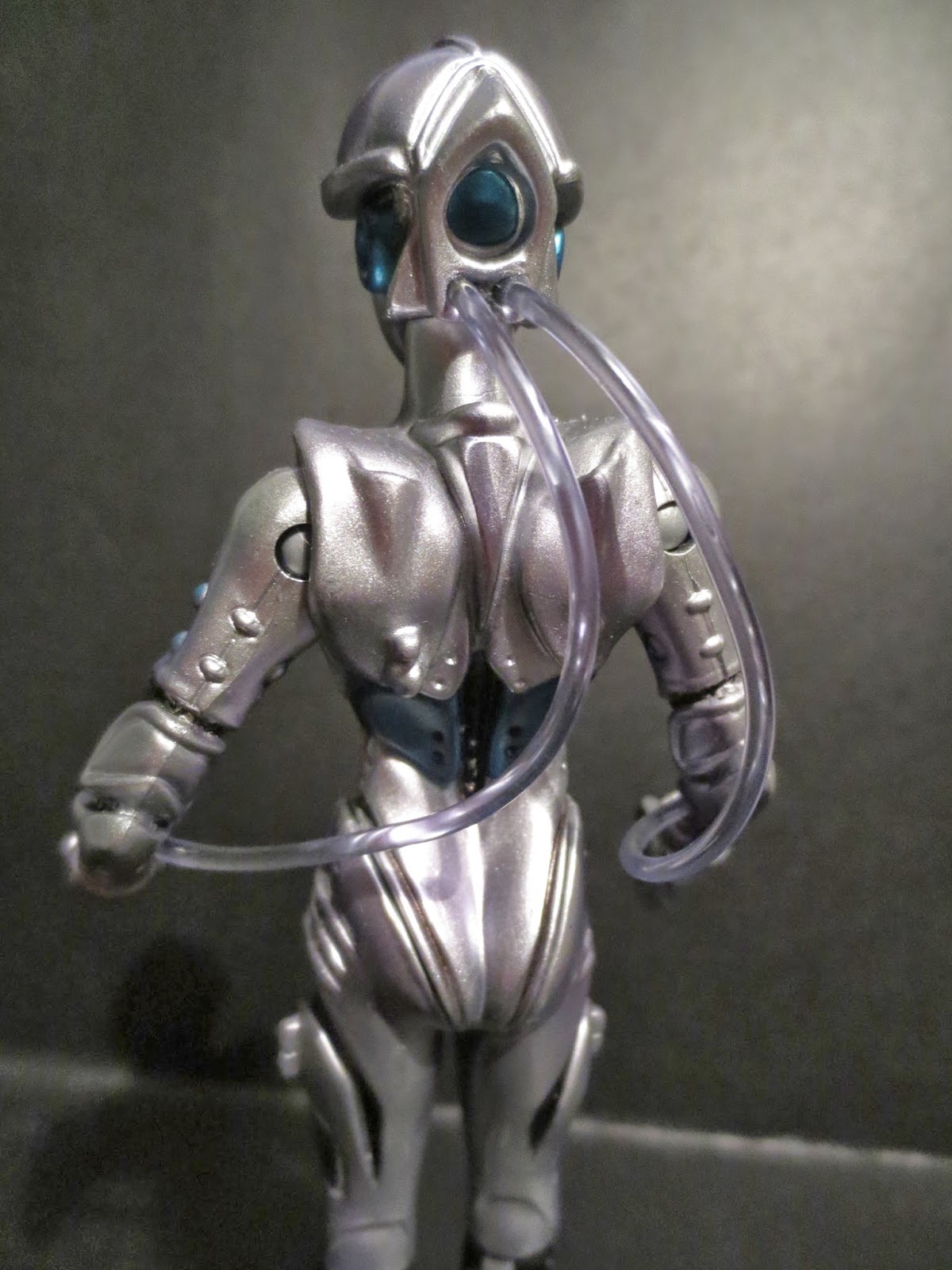 While the sculpt is excellent, I believe that Maria's paintwork is what truly makes her one of the most striking figures in my collection: The combination of silver, cobalt blue, and just a shade of purple really just looks fantastic. Every little paint application is neat and clean here. I love the way the silver body sometimes looks to have a purple sheen to it! Just gorgeous! 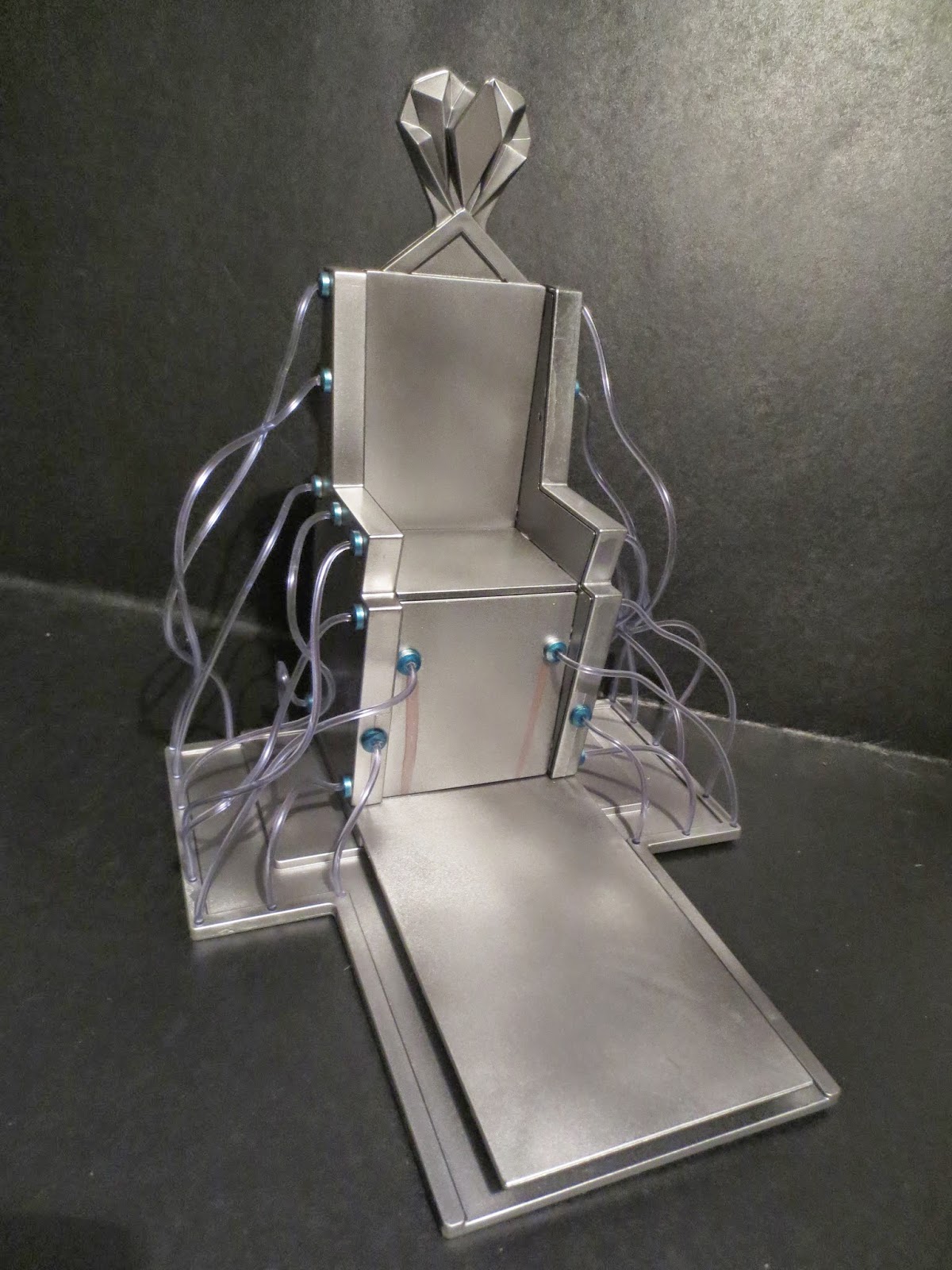 The Silent Screamers line delivered some of the most impressive accessories of any toyline. While Maria is actually one of the figures from that line with the least amount of accessories, she still is incredibly impressive by all other accounts. Maria comes with her massive chair. It's just awesome! You have to assemble it a little bit (plug the throne into the base and attach all of the transparent tubes) but it's worth it. When John reviewed this figure over at The Clawful Punch, however, he pointed out: "[I]t had sat in the package for so long that the plastic tubing left streaks on the throne docking station but i suppose i can just imagine it's just fuel or oil that keeps Maria going." 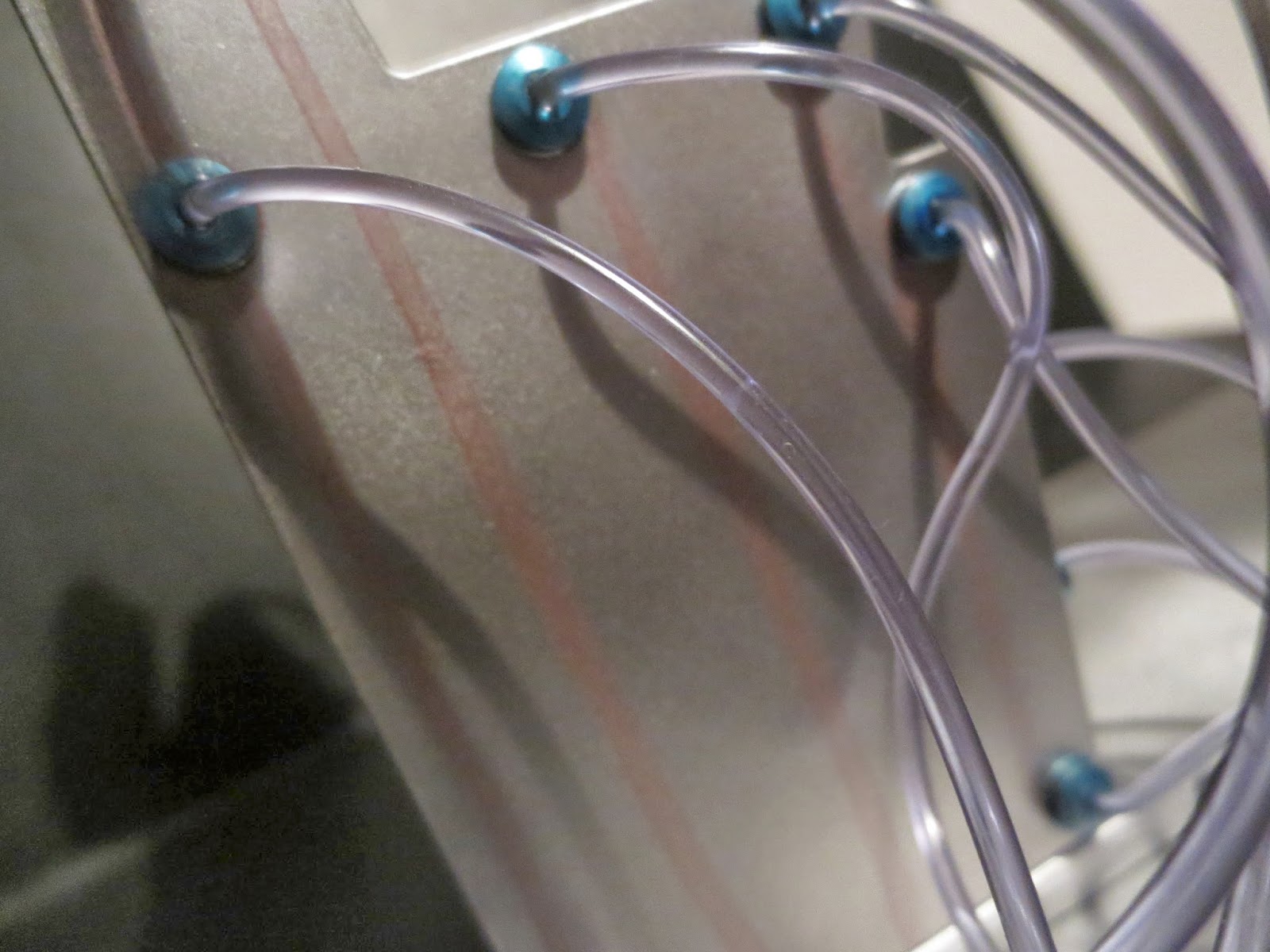 Yup, the plastic tubes did leave some weird streaks on the side from being sealed for a number of years and in contact with the silver paint of chair, but I'm going to agree with John here that it actually doesn't look bad. It actually looks kind of intentional. Otherwise, just look at how awesome this chair is! 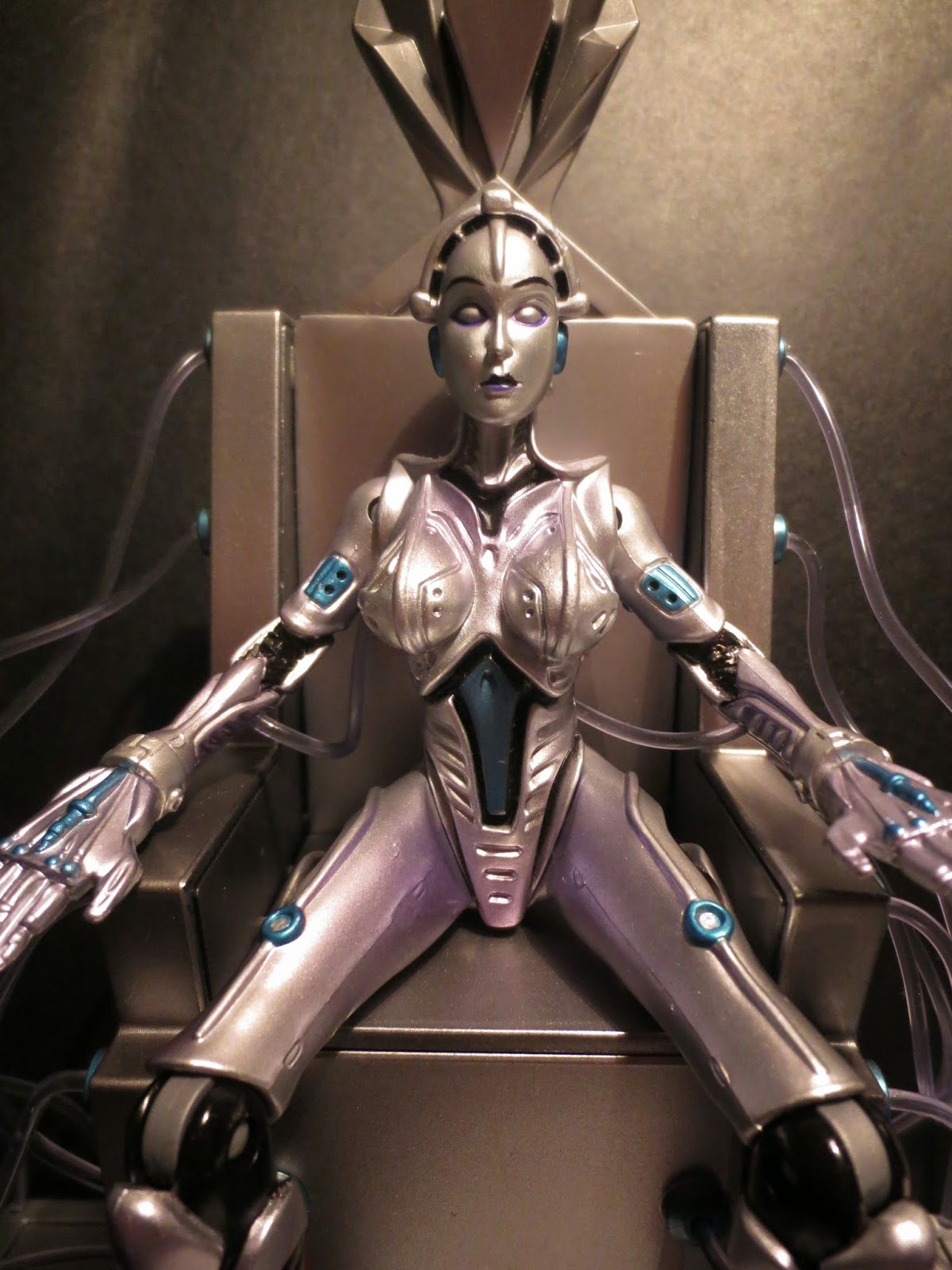 I love Silent Screamers! Seriously, it has almost everything I like in a toyline: A horror theme, great sculpting, lots of accessories, and each figure is akin to a miniature diorama. I really think once we're a few more years removed from the early 2000s, action figure collectors will look back and really appreciate just how amazing this era was in collecting. This was a time when we had lots of new companies forming and each company was truly willing to step up their game in trying to outdo everyone else. Bigger accessories, more detail, more obscure licenses; it truly was a magical time. I love Maria and am extremely glad to have completed this series. Overall, when comparing her to other toys of her time, I think she gets a Great and a 1/2. If she'd had just a bit more articulation such as a ball jointed head or elbow hinges, she would have easily warranted an Epic. Still, she's quite impressive! 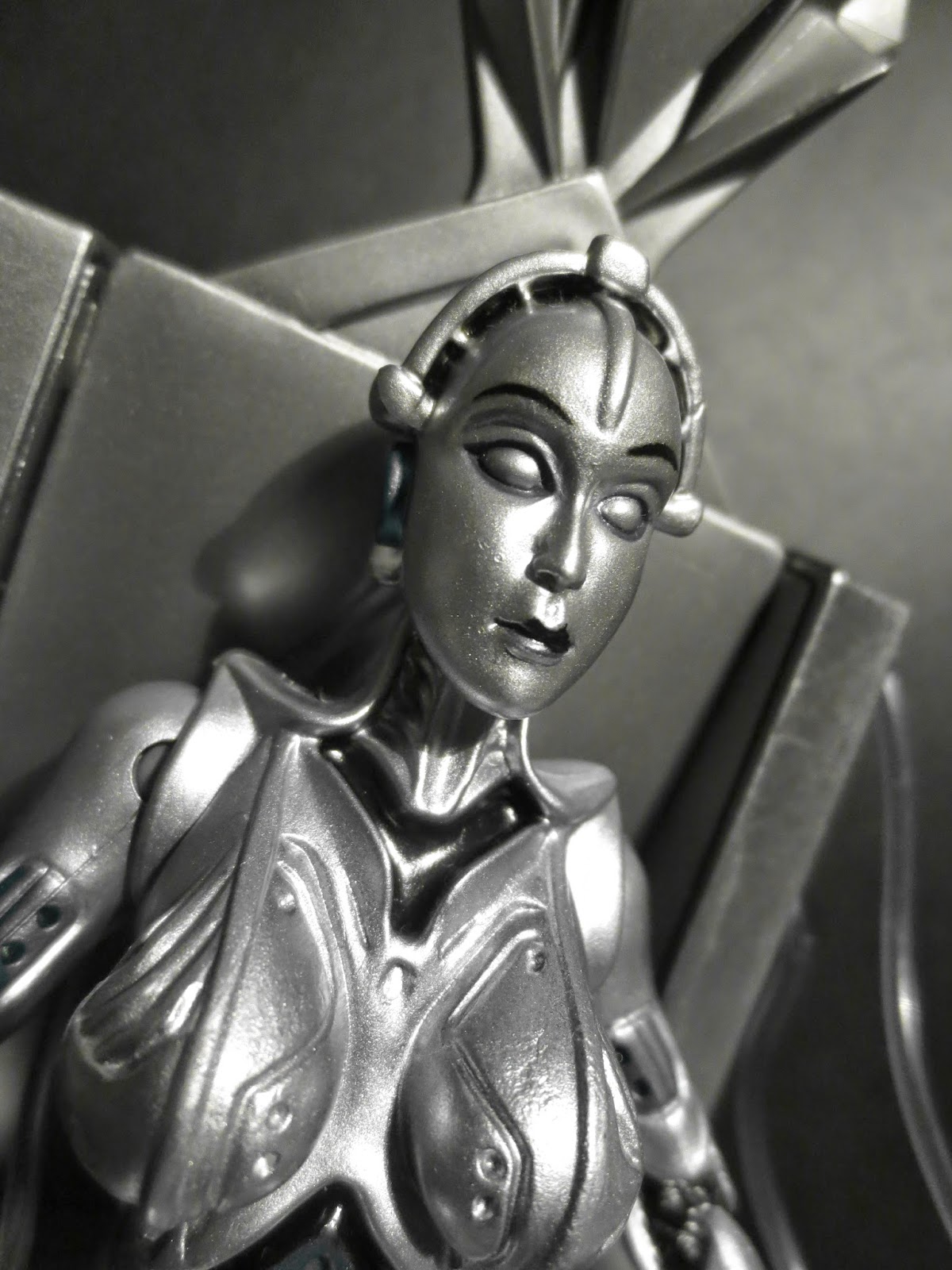