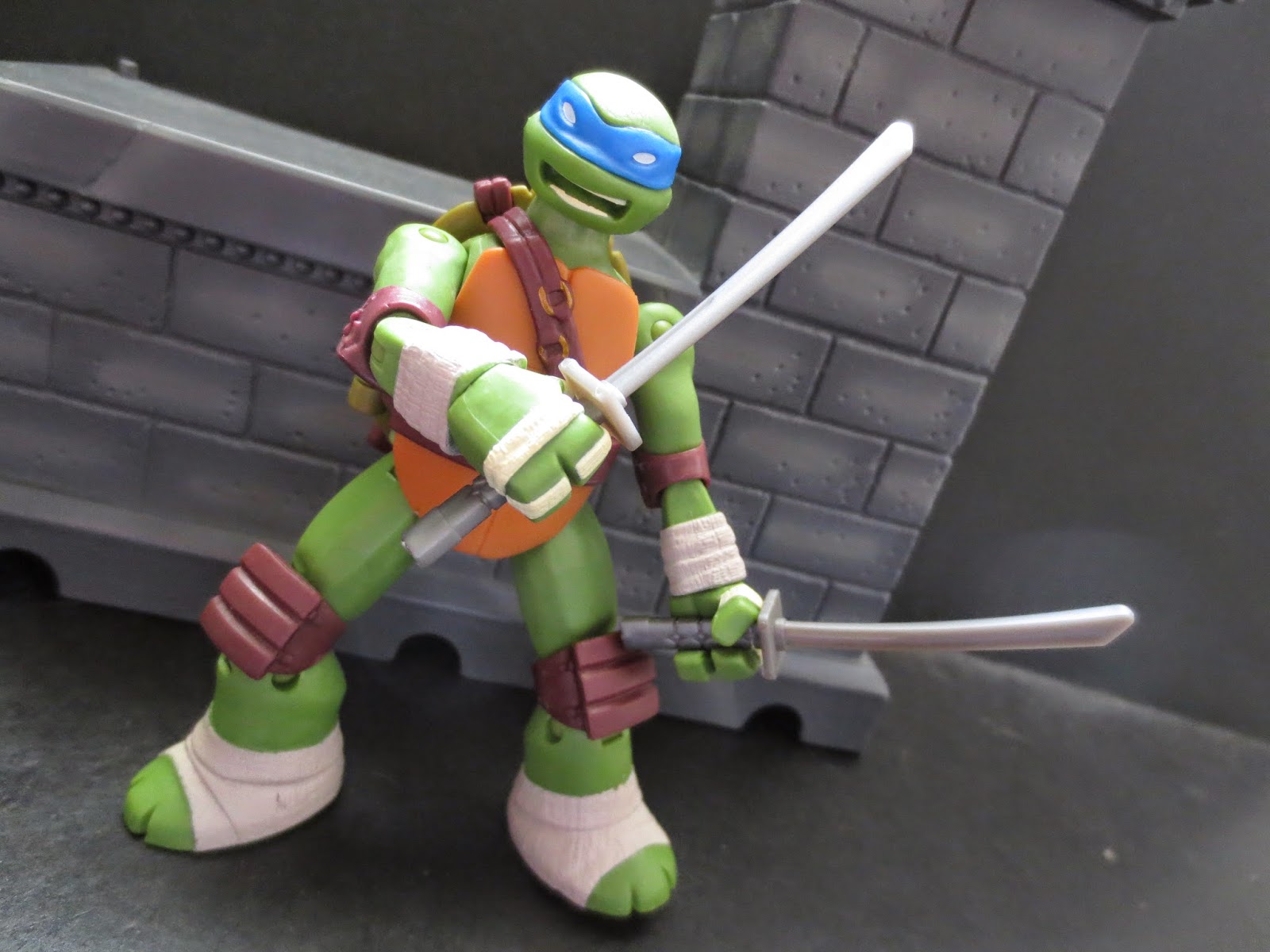 It's been over three months since I reviewed Battle Shell Raphael and all that time I've had the rest of these guys just sitting on my shelf. Since we're seeing a bunch of traffic related to all things TMNT due to the release of the trailer for the new film coming out this summer, I figured I'd go ahead and review another one of these guys. Other than Casey Jones, I haven't bought any other TMNT figures this year. I've been overly impressed with some of the new offerings and if you remember my review of Battle Shell Raph, I wasn't overly impressed by him either. I get that Playmates has tried to make these figures look more like their very stylized cartoon counterparts, but it's just not a look that's as appealing to me on a toy as it is in a cartoon. Anyways, here's a closer look at Leo.... 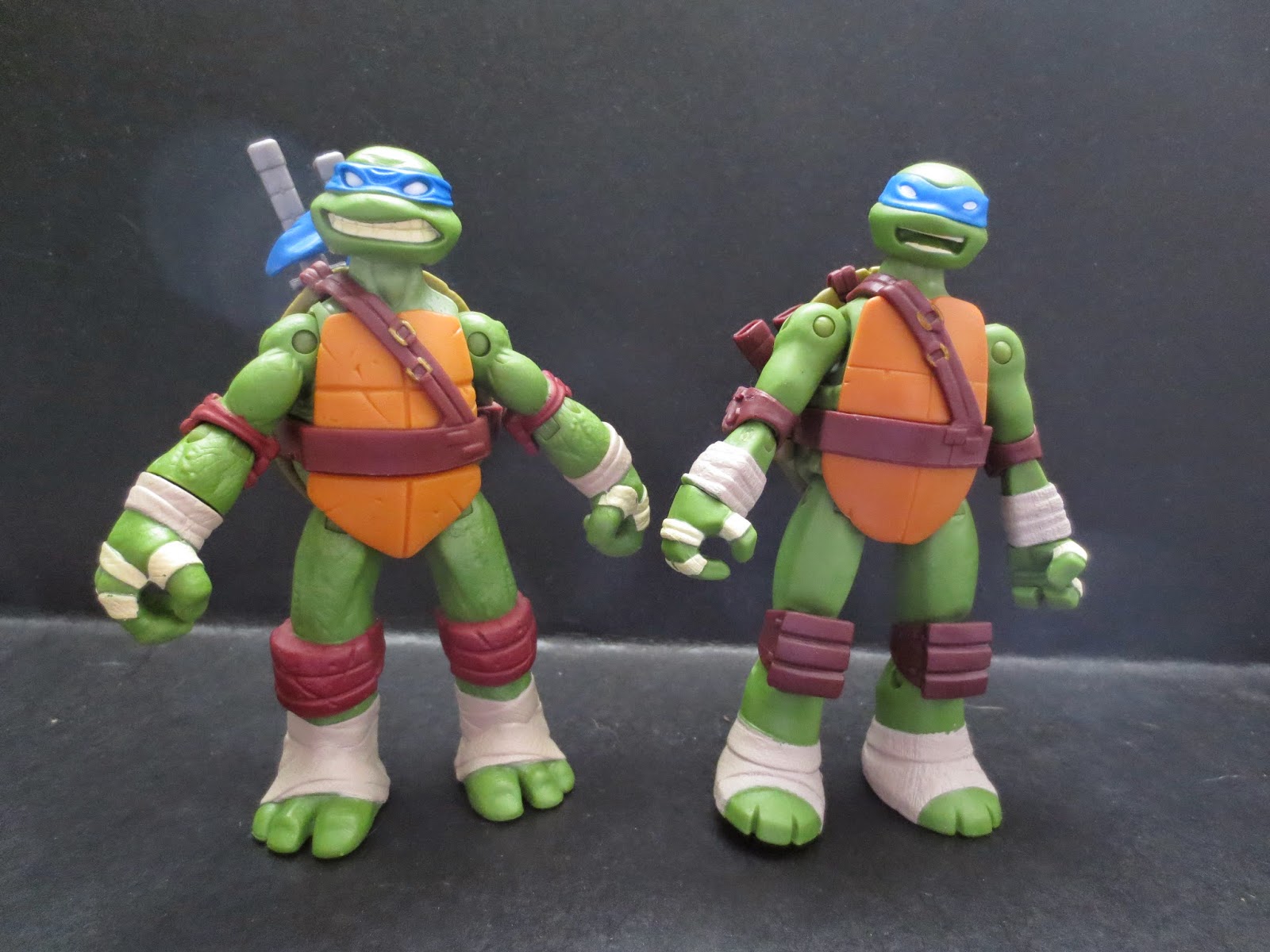 Leo's just a hair over 4 1/2 inches tall and has a much smoother, more animated appearance than the original release of the character from 2012. Little things like the smooth skin, less pronounced toes, larger feet, and a smaller head definitely match the Nickelodeon TMNT animated series better, but just seem like a step down from the stuff we got early on in the line. He'll look fine next to other characters, but if you have a mix of turtles (say the original Raph and Mikey and the Battle Shell Leo) he might look out of place. 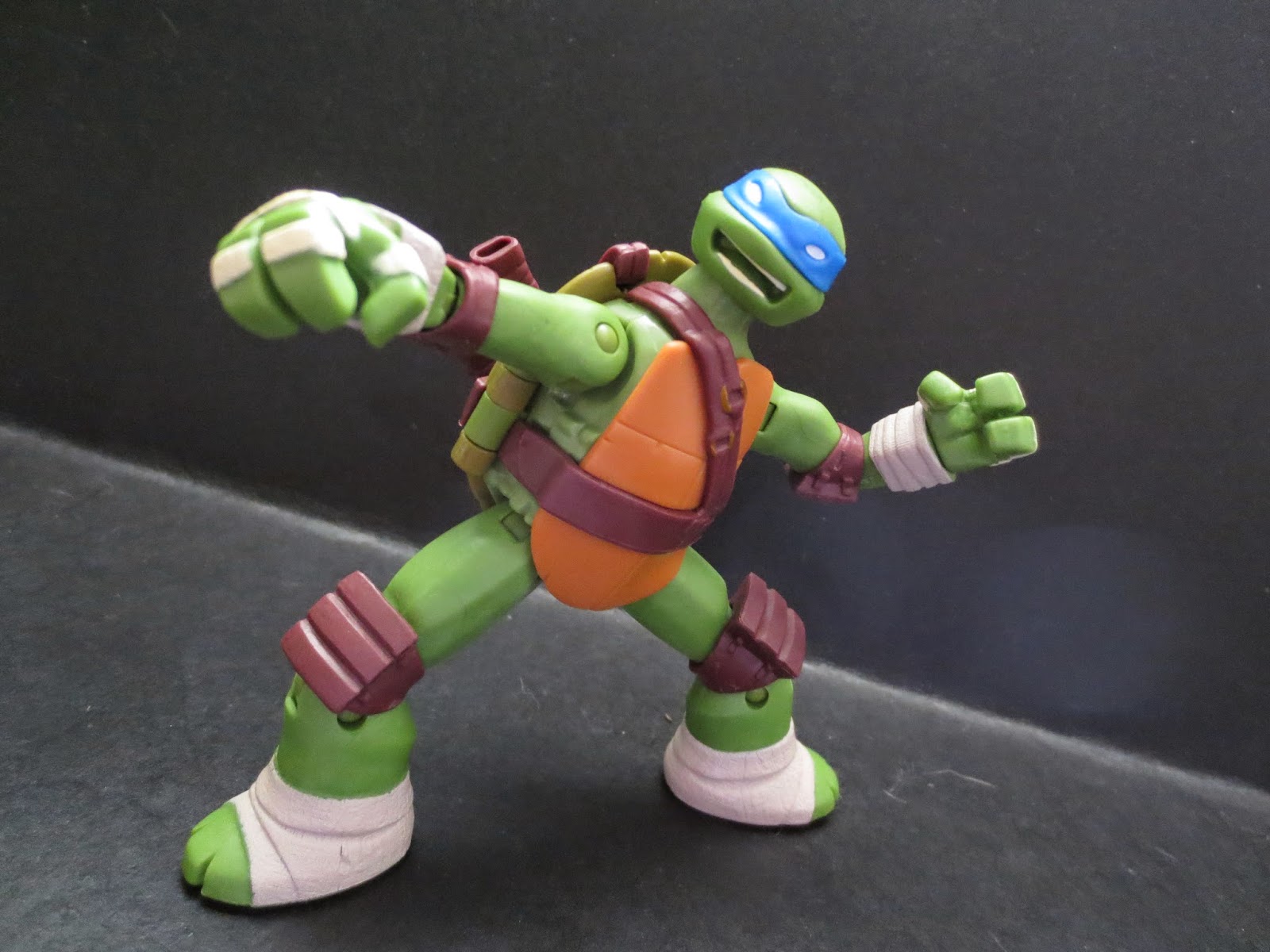 I am glad that these guys retain the same great articulation as the first series turtles from 2012, though. Leonardo features: swivel/hinge knees, swivel/hinge hips, swivel/hinge shoulders, swivel/hinge elbows, swivel wrists, and a ball jointed head along with the titular Battle Shell, a hinged, opening shell feature. Like most of the Playmats TMNT stuff, Leonardo feels very sturdy and durable. These really are good toys that won't break or frustrate kids.

And here is that opening Battle Shell! It's on a very sturdy hinge and has slots and pegs to hold Leo's kunai, his small dagger, and his two shuriken. It does hold more than you would expect. Unfortunately, while the hinge is sturdy the clasp is not. Mine snapped off maybe on the fifth or sixth time opening it. It still opens and shuts, but it won't stay tightly shut anymore. That's lame. 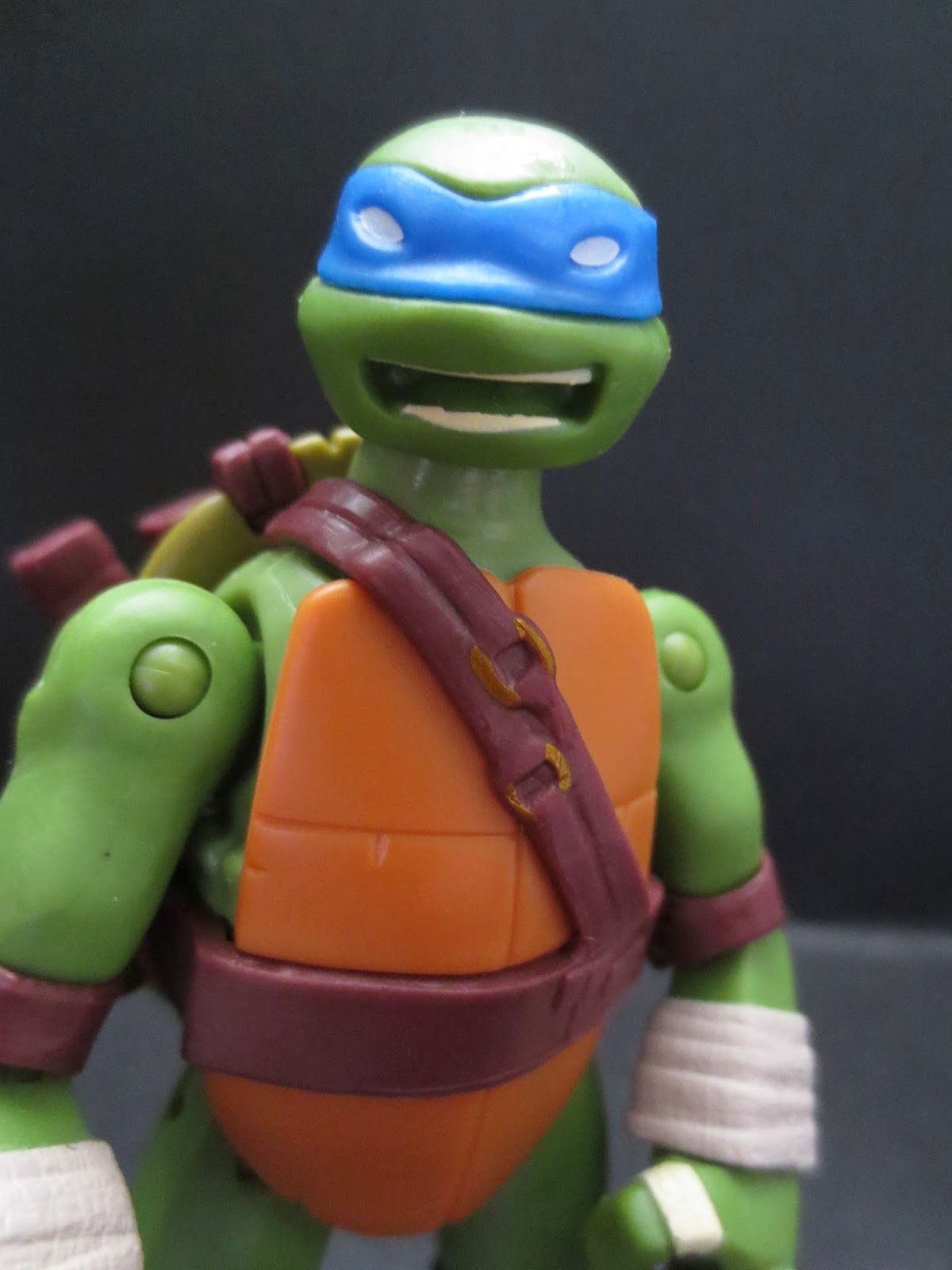 At a glance you might think Battle Shell Leo is the same as the 2012 Leonardo release, but take a closer look and you'll realize there is nothing shared here. Where the 2012 figure had lots of detail on the skin, the shell, and the chest, this guy is pretty much smooth with only minor nicks and dents. His pads are much more square than the previous figure with less detailing to make them look like leather or something. The head is also less expressive. I like the open mouthed pose, but I hate the lack of defined teeth. Seriously, hate to rag on these guys but the former figures were just so amazing that these are a huge disappointment to me. Honestly, I'll probably either sell/trade  the Battle Shell versions of the turtles or use them as younger versions of the turtles. 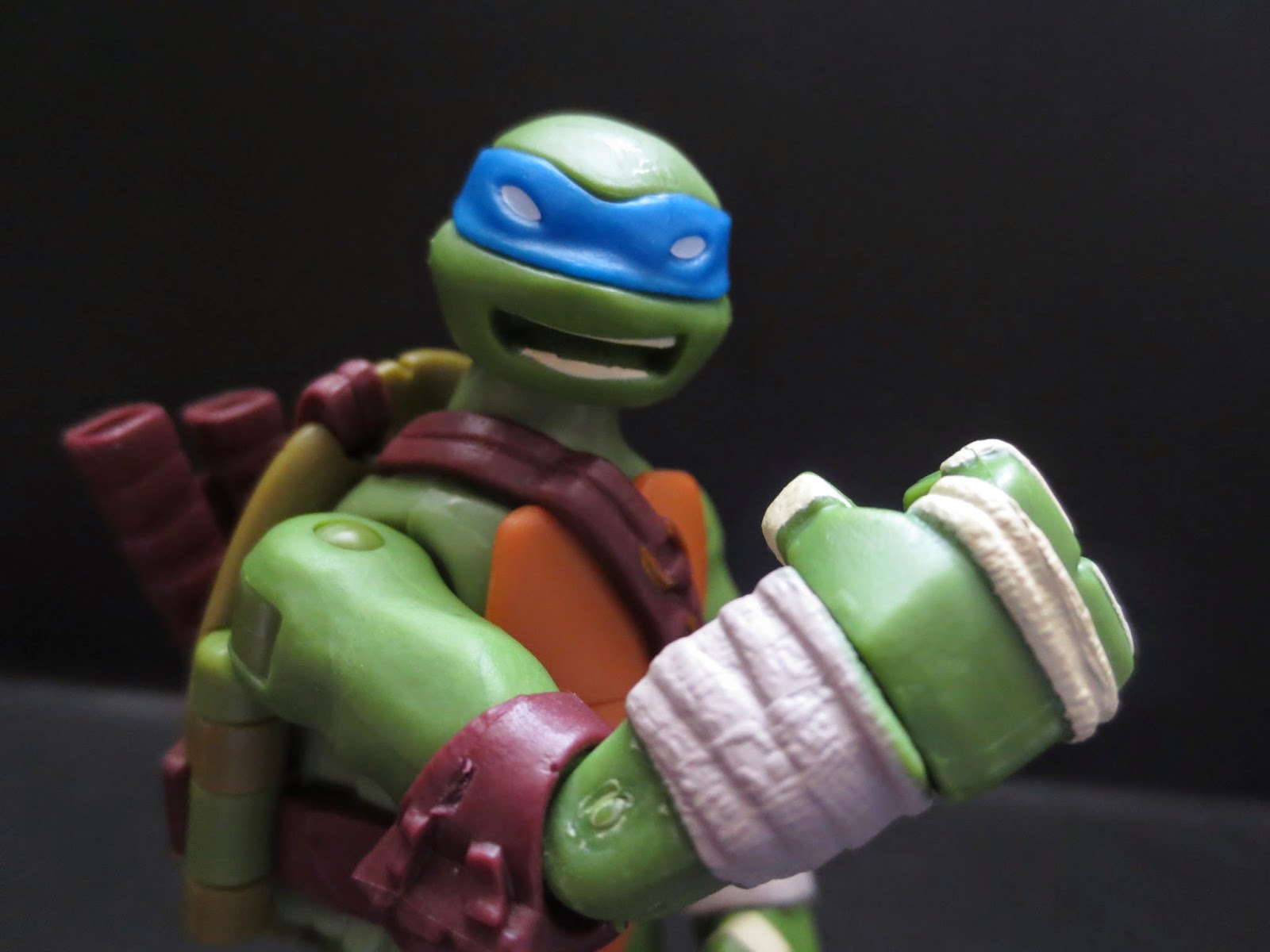 The paintwork is simple, but clean and neat. The color of the body is a light green that matches Leonardo on the show. Many of the details like the bandanna, pads, and the belts are simply molded in pieces which give the figure a nice, clean look. The wrappings on his ankles and wrists look nice, though. The only detail work I would consider would be the white on his teeth and the gold buckles on his belt, both of which are fine. Nothing crazy here, but nothing bad either. 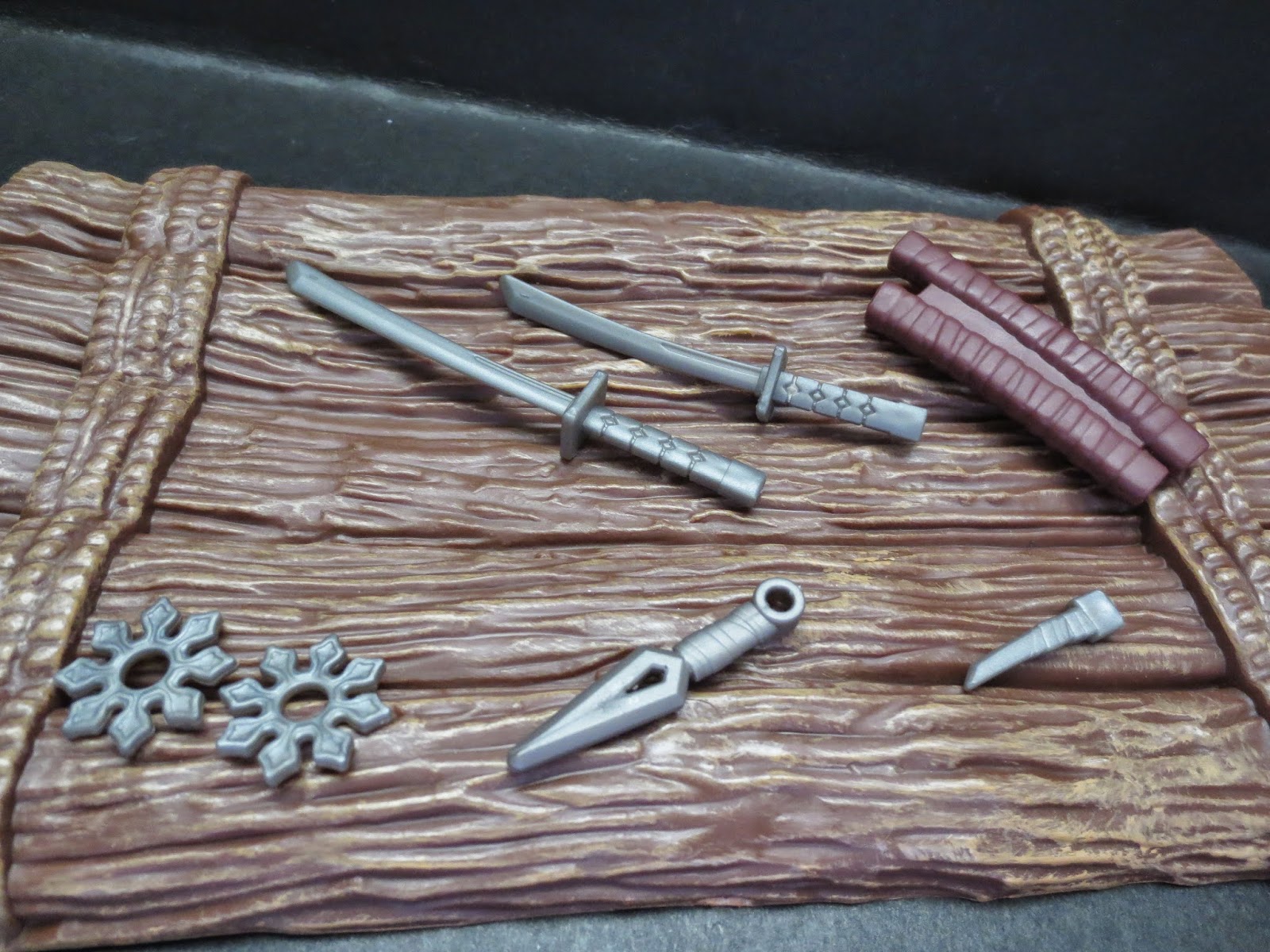 Another disappointment to me is the lack of accessories. I mean, there are still a good number of accessories, but they're pretty much just modified versions of the 2012 figure's accessories. I was hoping for something more wacky or unique, but instead we get the same. Leonardo comes with two katanas (one shorter than the other), a removable sheathe for them, his kunai throwing dagger, his small shiv like dagger, and two shuriken. I guess the opening feature takes up a bit of he budget and  can't argue that this is a bad assortment of accessories, but since they're just different molds of the same stuff, why didn't Playmates try anything new and creative? I know the katanas should pretty much come with every Leonardo figure, but I'm remembering about the cool, crazy stuff the vintage Leo came with. Grappling hooks?  Little pizzas with blades? An armadillo that served as a club? I miss that kind of stuff, actually. 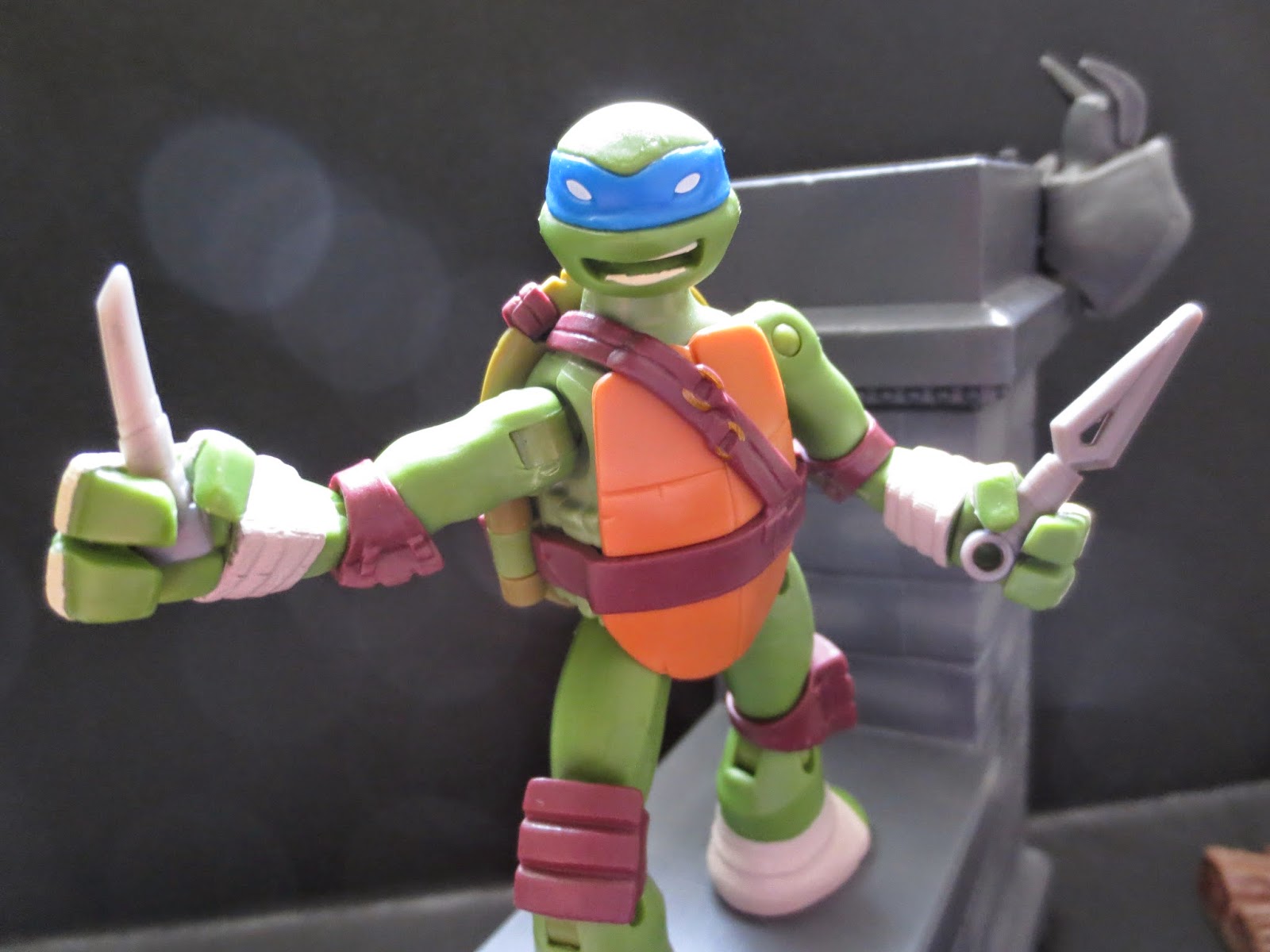 Even though I'm not a fan of the style, there's nothing about this figure that really makes it a bad figure except for the breaking clasp on the shell. I still think it's a big step down from the previously released versions, however. Still, good articulation, a fair amount of accessories, and a neat feature do somewhat offset my personal issues with the design, but the breaking clasp seems more egregious in a kid friendly line like this. I'm actually giving this guy an Eh, which simply means that I don't think there's much here for a buyer who already has the previous figure or a non-completist. If you're really sold on having the animated look, however, I'm sure you'll be much happier with these guys than I am, though. Just be careful with the shell, as no amount of turtle wax seemed to help keep mine from breaking.