Action Figure Review: Blade from Masters of the Universe Classics by Mattel 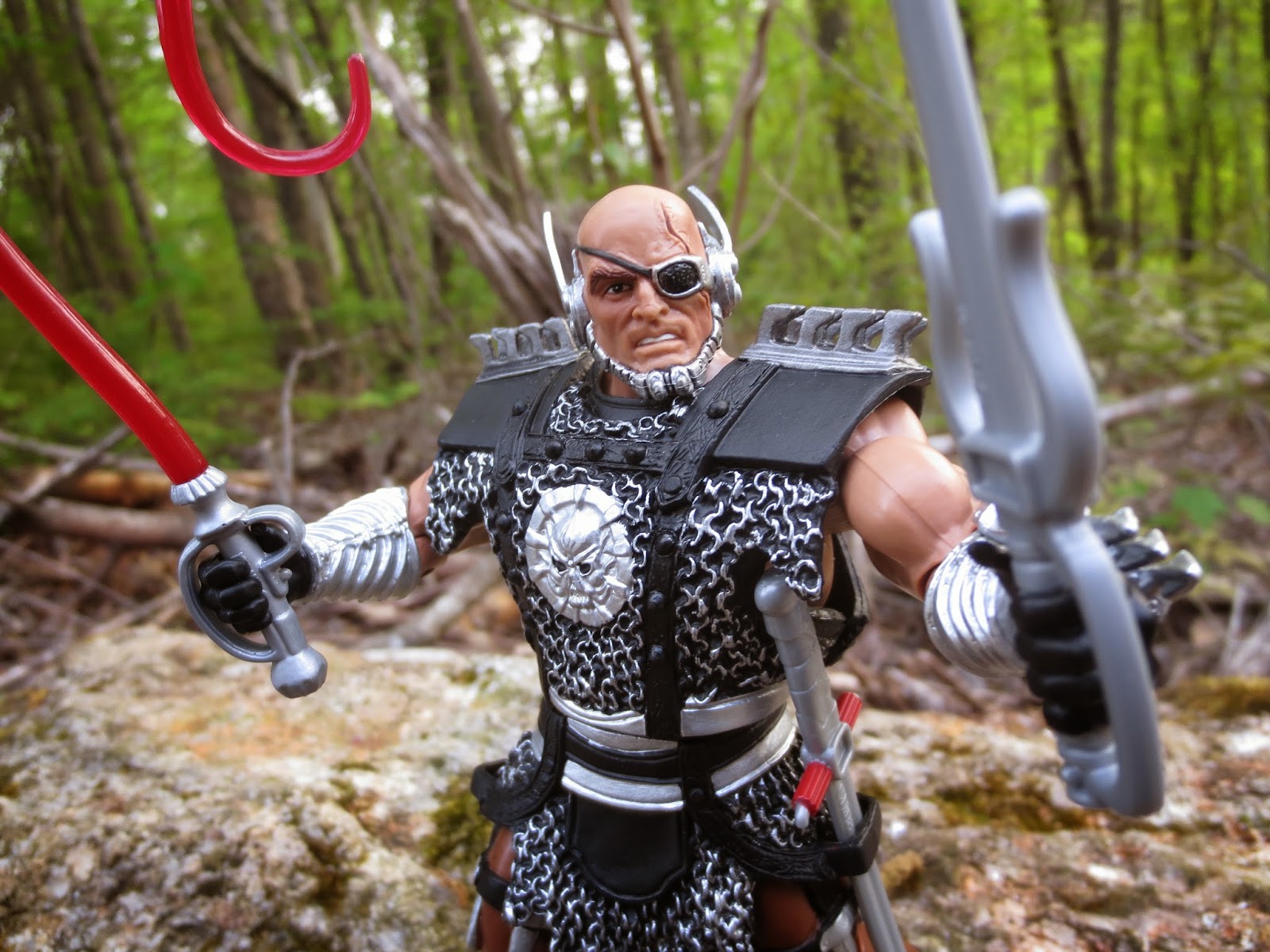 Masters of the Universe fans are typically pretty divided on Gary Goddard's 1987 Masters of the Universe. Me, I love it. Yeah, I'm not thrilled that large parts of the film took place on earth due to budgetary restrictions, but overall it's definitely one of my favorite representations out there (we discussed the film in depth last year for Masters of the Universe Day 2013 on the Confirmed Epic Podcast: Check it out!). That being said, I'm super thrilled that we've finally received our first figure from the film in Masters of the Universe Classics: Blade! Portrayed by actor and master stuntman Anthony De Longis (seriously, the guy taught both Indiana Jones and Catwoman how to use a whip!) Blade was a character created exclusively for the 1987 film who managed to get an action figure in the vintage toyline. Mattel doesn't have the rights to the 1987 film but since Blade was released in the vintage line, he's apparently fair game. That's great because not only is Blade an awesome looking character (he's been on my wishlist for a long time) but De Longis has also been a supporter of the line and involved in the MOTU fan community. It's about time someone who has done something for MOTU gets a figure, eh? Anyways, ready to learn more about Blade? Then join me after the break... 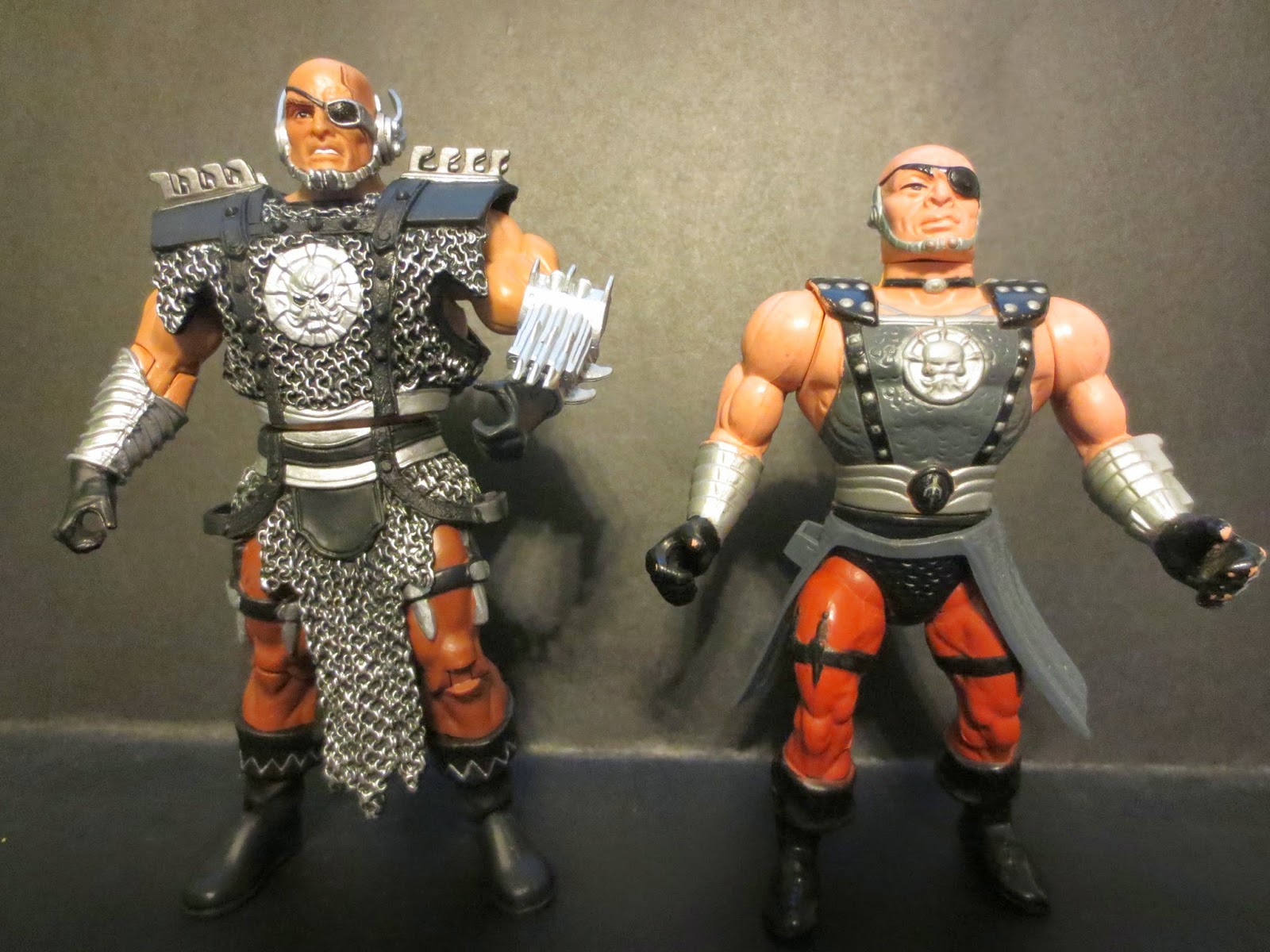 Blade stands about 6 3/4 inches tall and shares parts with a number of other MOTUC figures. Not that many parts, though, as while Blade looks like just a regular guy he's really decked out in some unique gear that required he receive lots of new pieces.  Blade more resembles his film counterpart as played by Anthony De Longis than the vintage Mattel figure, although the figure really seems like an amalgam of both representations of the character. 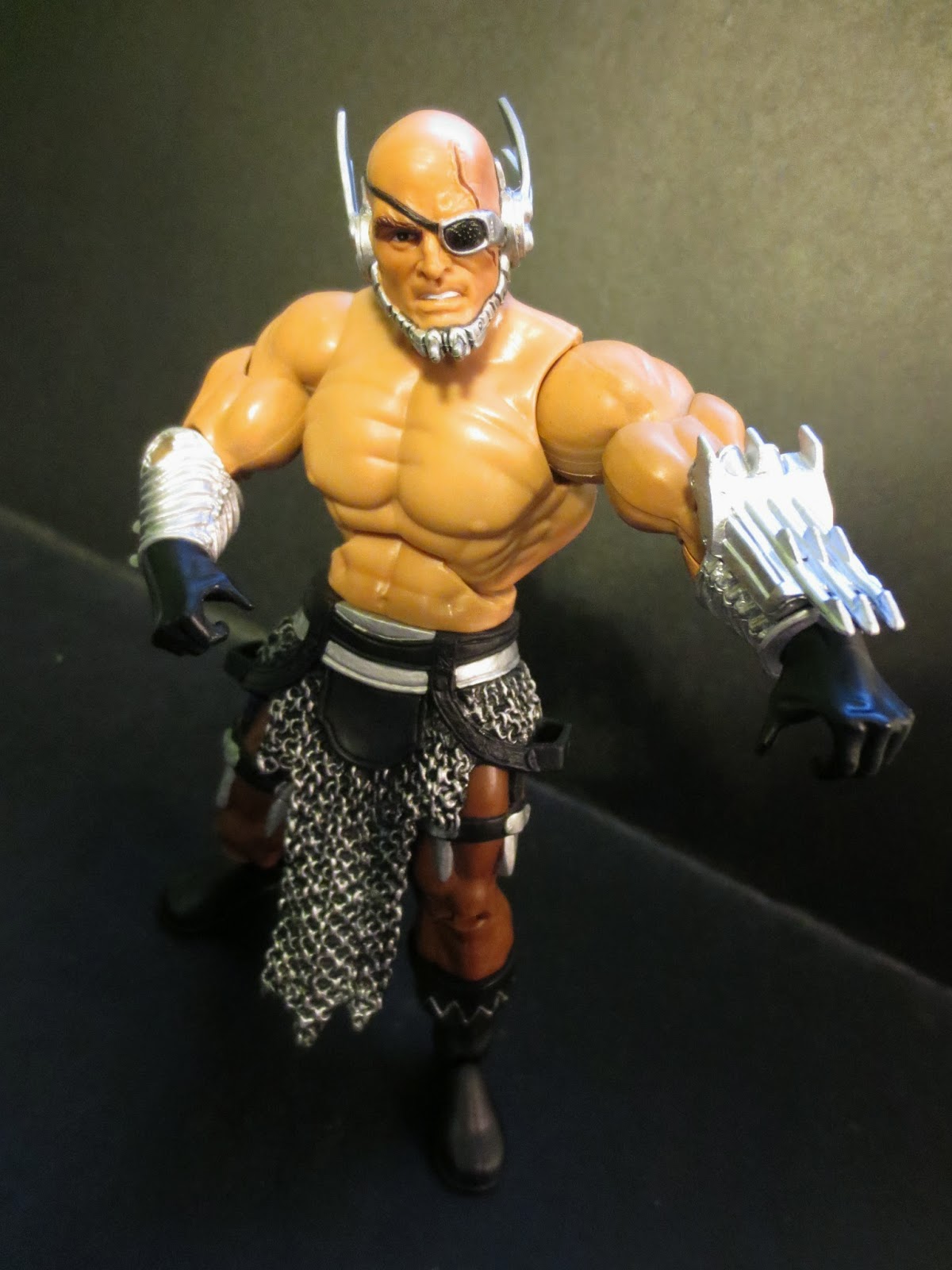 Blade's articulation is pretty standard for the line with no real surprises: hinged ankles with some lateral movement, boot swivels, hinged knees, swivel thighs, swivel/hinge hips, a swivel waist, an ab hinge, swivel/hinge shoulders, swivel biceps, hinged elbows, swivel wrists, and a ball jointed head. While Blade's armor is a bit limiting, the armor wisely has some cuts near the arms that allow for better shoulder movement. The hips are also a bit restricted due to the long chainmail waistcoat, but the softer plastic used for the piece really keeps the restriction to a minimum. No quality control problems here; Blade is an all around solid toy. 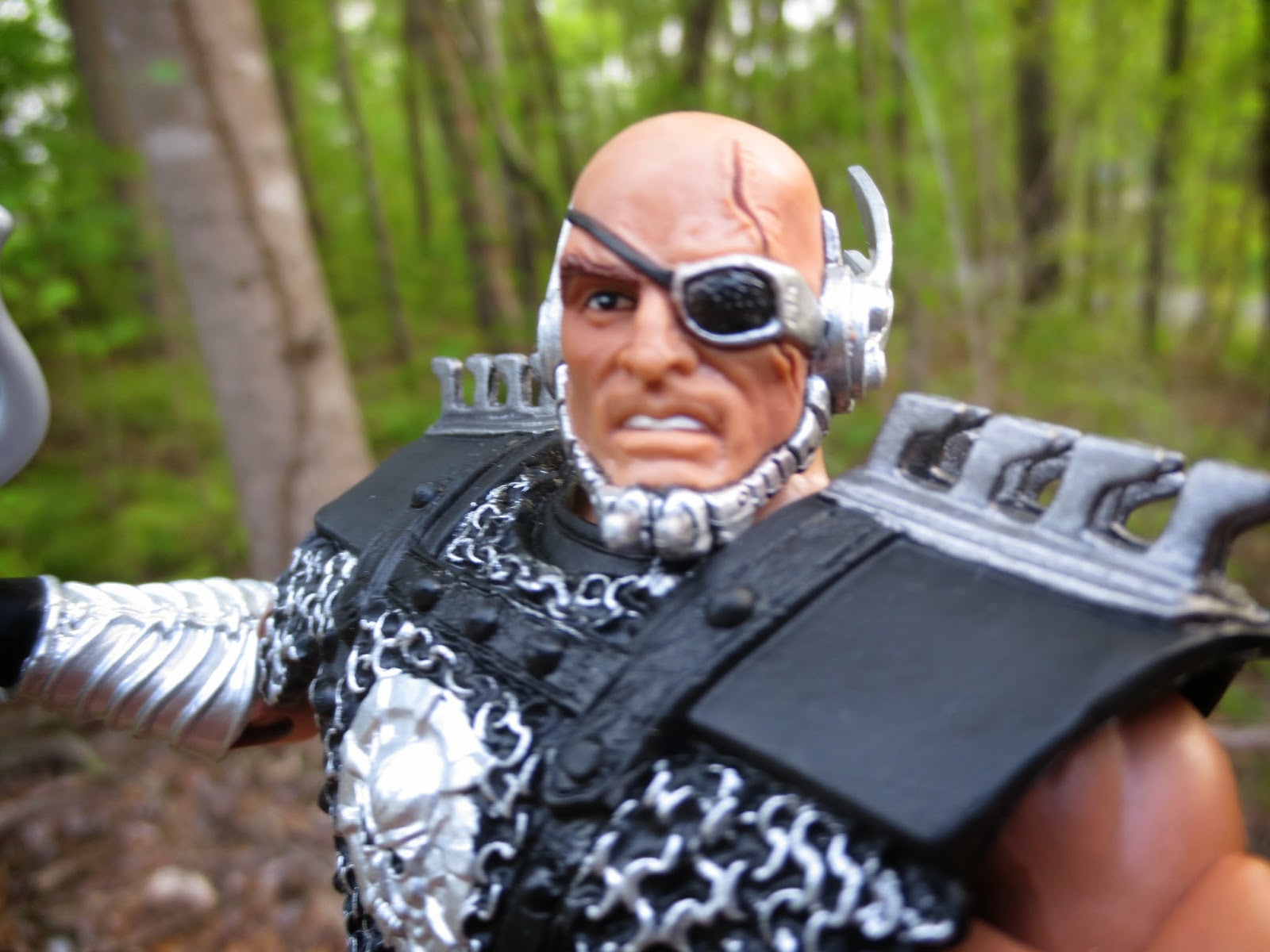 As I've already mentioned, Blade has a ton of new parts which really work together to make him a unique and interesting warrior. His thighs are unique as they each have a sheathe with three smaller daggers attached to them. I love fun elements like these! His gauntlets are fairly intricate and have cool, Batman -like blades on the bottoms. Attached to Blade's left gauntlet is a dart launcher with three darts sculpted on it. Blade's head sculpt is just fantastic and features tons of crazy detail such as his intricate headgear, a very angry and determined facial expression, and an excellent scar which is mostly visible under his eyepatch. Blade is just really well done. Honestly, the only real problem I have with him comes from his armor. 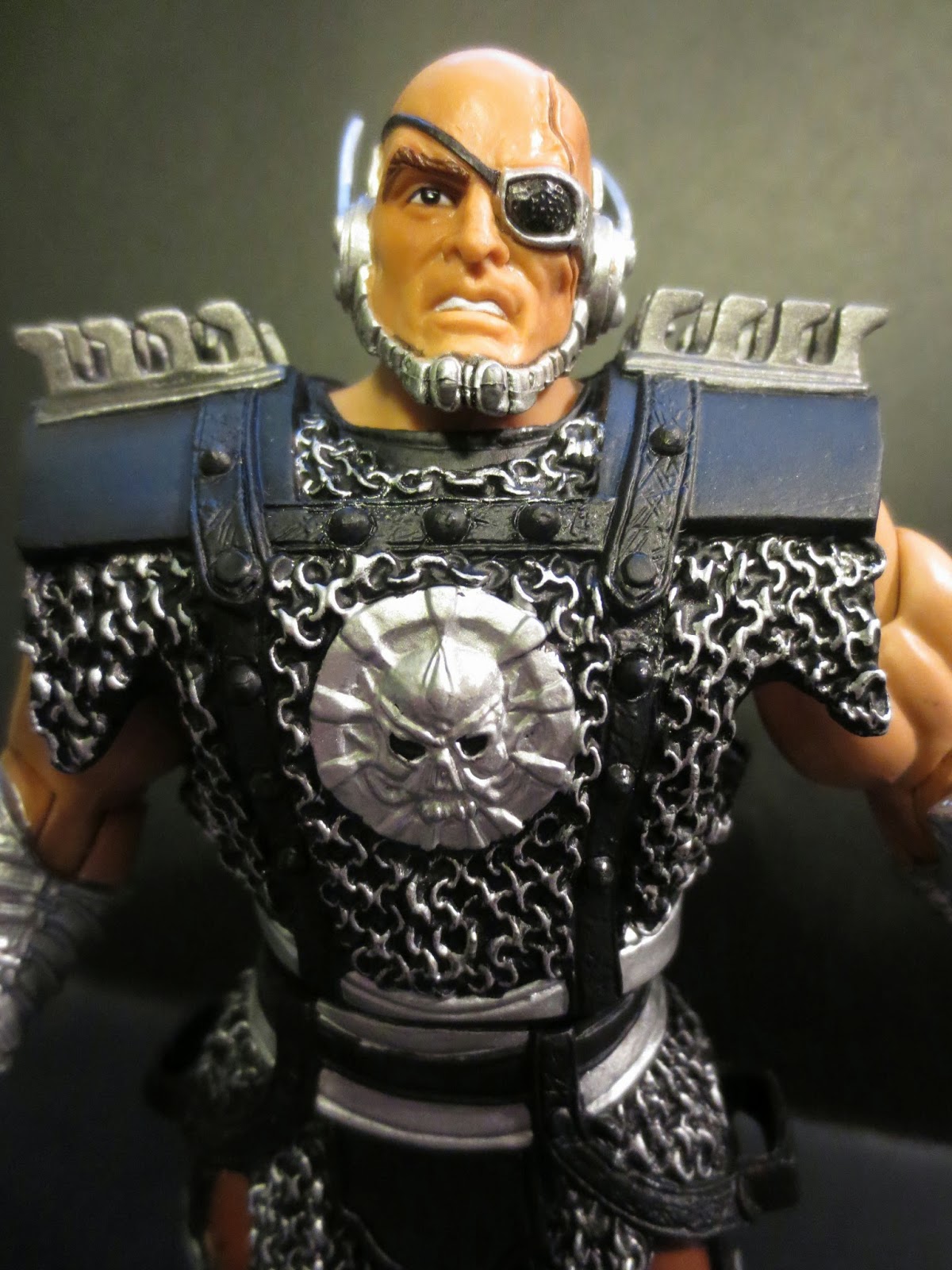 Yup. It's the armor again. It's definitely not as bad as Hydron and Sea Hawk, though. It actually has a different problem. While their armor made them look overweight, Blade's armor sets up too high and makes his neck look a bit stumpy. Honestly, I think if Mattel had simply used a longer neck piece we wouldn't have any problem. As it is, simply not attaching Blade's head all the way also makes him look much better and more proportionate. Regarding the sculpt and appearance of the armor: It's awesome! The details on the chainmail links, the leather harness, and the creepy emblem in the middle of the figure just look so fantastic. It's a shame that a little extra thought in the design department would have caused this guy to be nearly perfect. 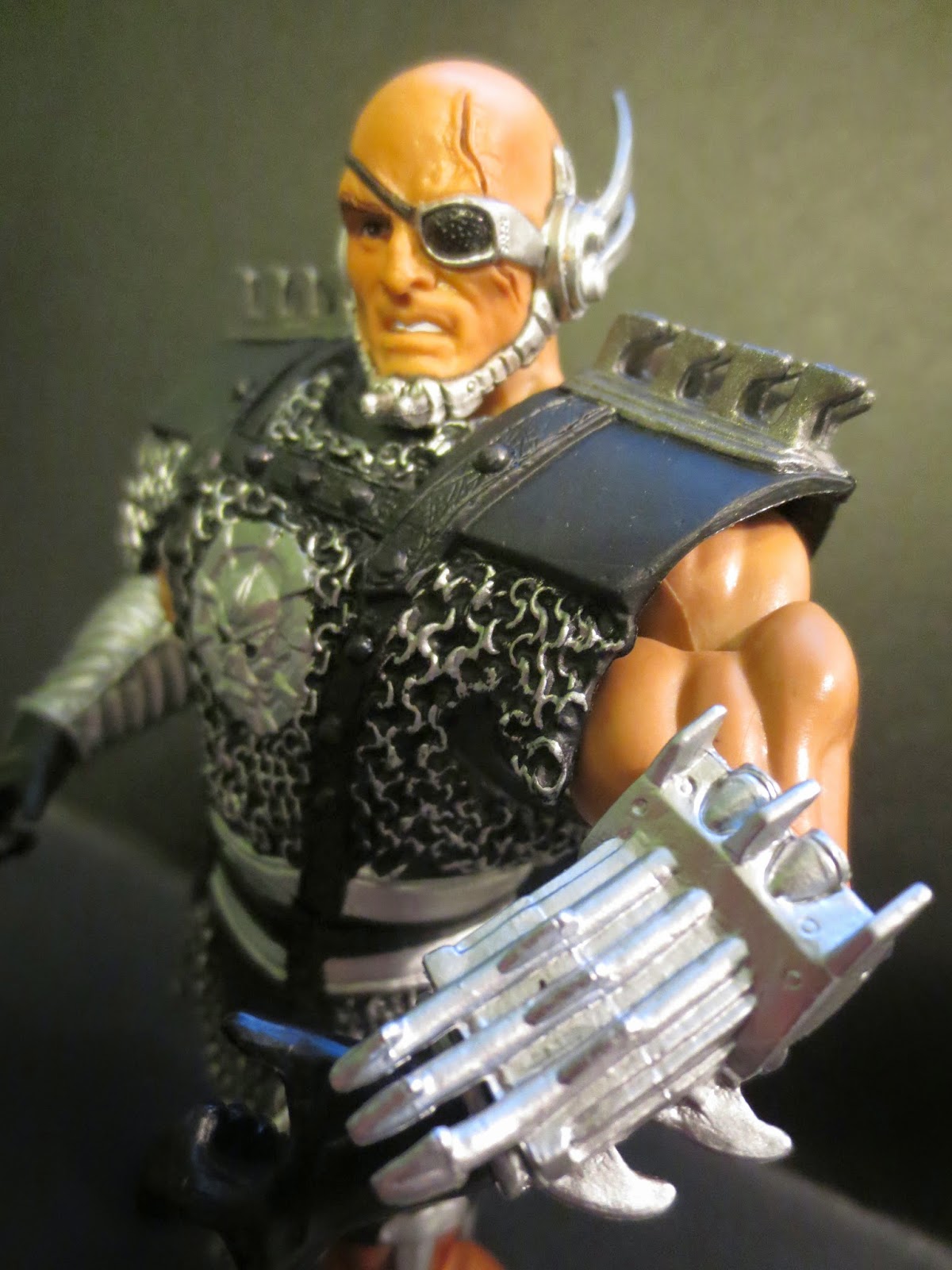 Blade probably has one of the most interesting and complex paint jobs of any figure in MOTUC due to his coat of chainmail armor. Both his removable torso armor and the piece hanging over his waist and legs have a fantastic silver paint app on each link that really captures the look of actual chainmail. It's truly impressive. Other details such as the silver lines on Blade's boot cuffs, the daggers on his thighs, and the darker metallic blades on his shoulders just help Blade to stand out. There's really not another figure in this line with this sort of color scheme. The paint work on his head might just be the best in the line. With hardly a spot out of place, check out his metallic chin guard (complete with a dark wash), the crisp facial features, and the excellent work on his scar. Blade really manages to stand out among his peers in a positive way! He's quite fearsome and expertly crafted. 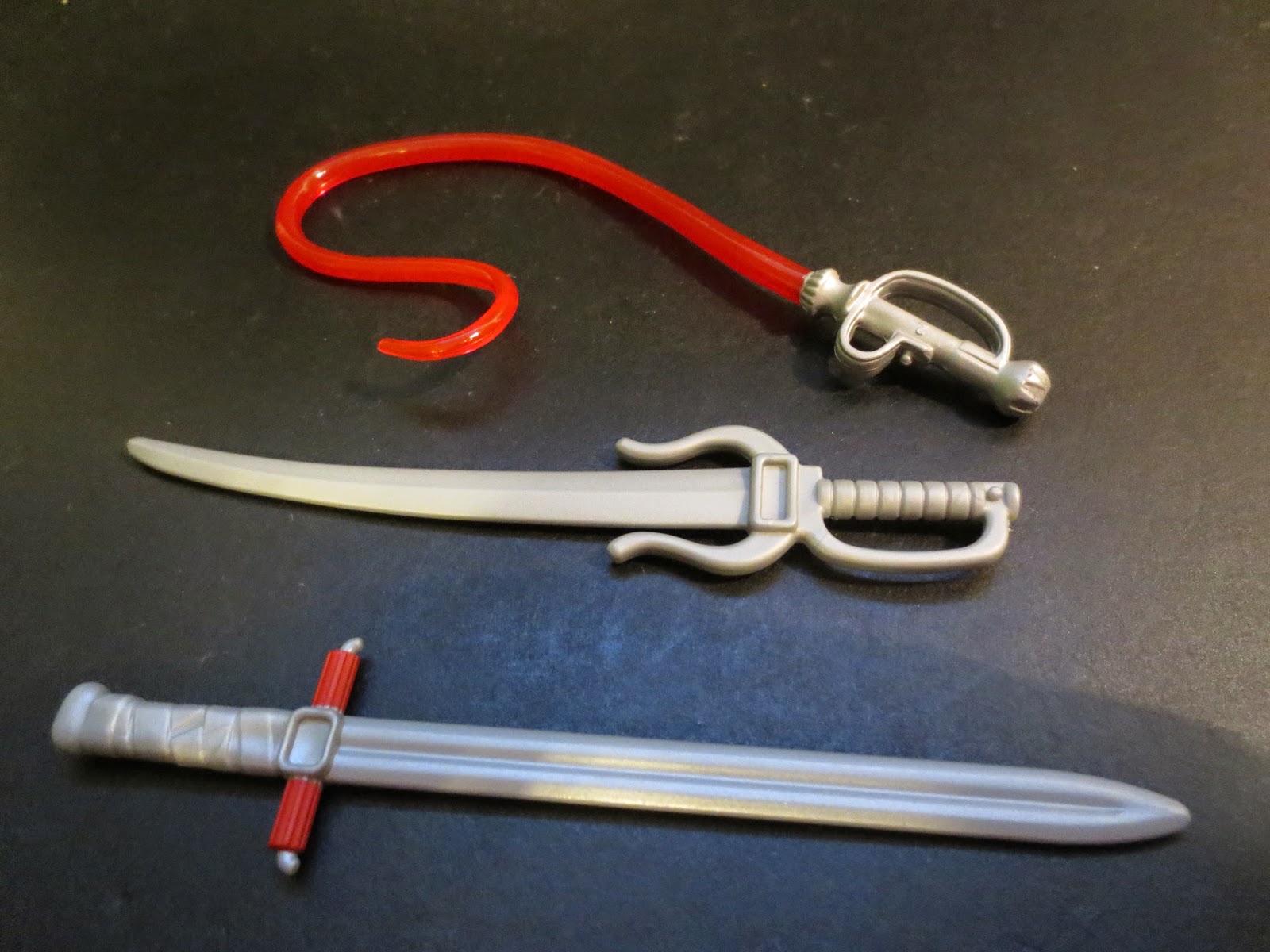 Blade comes with three actual accessories as well as his removable armor, but I  talked about that already so I'll move right on to his weapons. First, Blade comes with a curved sword that is almost identical in design to the sword that came with the vintage action figure. The only real difference is that it's a bit larger and the hand guard has been swapped to the appropriate side to allow Blade to correctly hole the weapon. The second sword is much closer to Blade's sword from the film. It's a double bladed broadsword with a simple yet interesting design for the hilt. The third accessory is the laser whip from the film. Back in 2010's Ultimate Battle Ground weapons pack Mattel released the Beast Man whip molded in red as an homage to this accessory, but here we get the real deal. It's a solid, translucent whip with a silver handle. I love it, although I will admit that the handle is quite large and will stretch Blade's hands out a bit. While there are some diminished paint applications on these accessories, I'm really happy with the quality of the plastic. It's a nice medium between being too brittle and too gummy. If every accessory could have this same quality of plastic, I'd be thrilled. 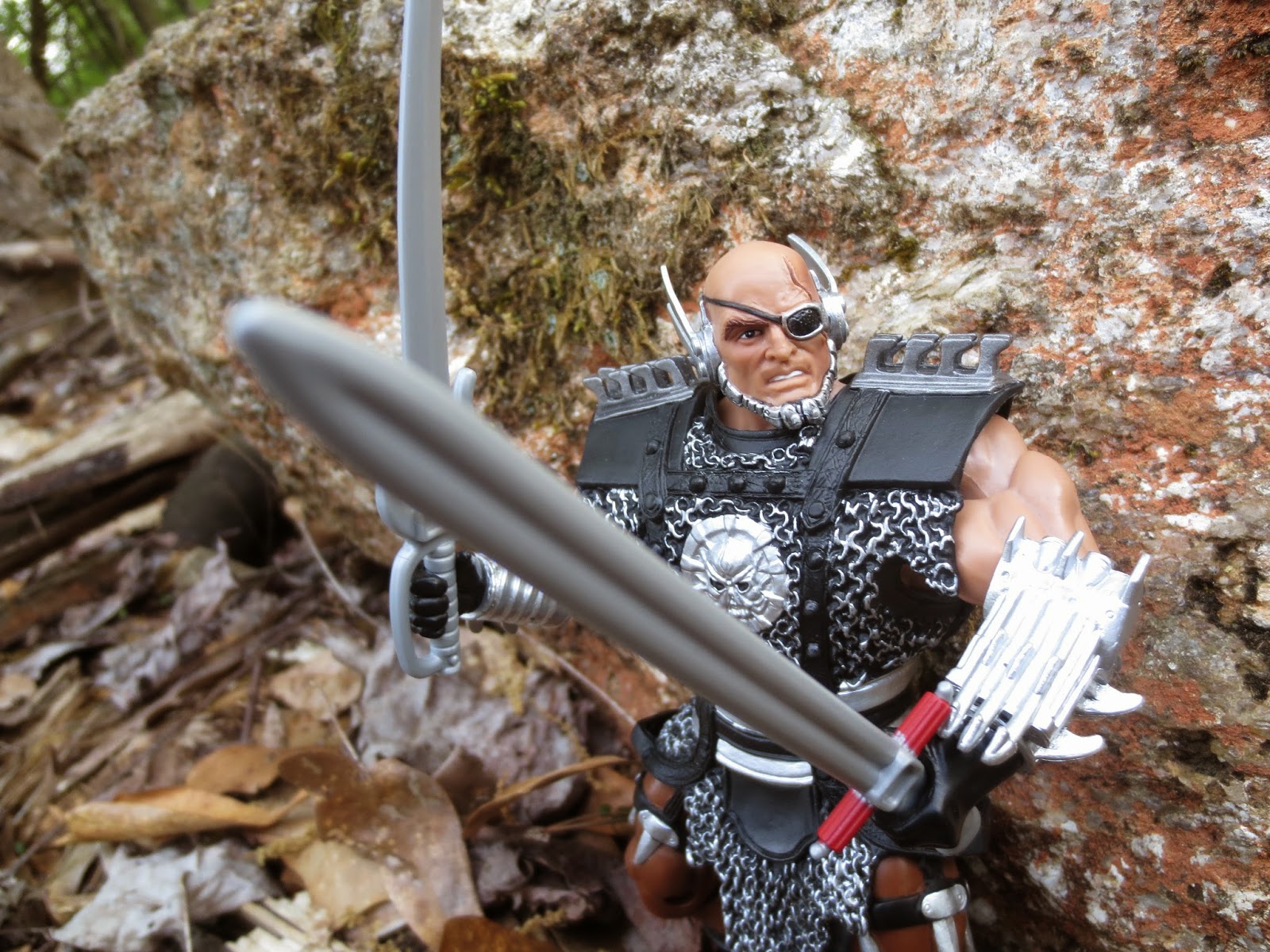 Yes, the armor might be a bit bulkier than I'd like and the addition of a longer neck peg would have improved things, but overall I'm pretty happy with Blade. Blade has long been one of my most wanted figures in this line and I'm thrilled to finally have him in hand. Not only is he an awesome character but he also provides some much needed representation for the 1987 film.  With the inclusion of unique detailed elements such as the daggers around his thighs, the gauntlets on his arms, and the sword loops on his hips, Blade's design really reminds me of some of the earlier figures in this line such as Tri-Klops, Man-at-Arms, and Moss-Man who all featured cool little details that made them feel like more than just larger versions of the vintage figures. I know the film isn't the most popular among MOTU fans, but that doesn't mean that Blade isn't a standout figure who deserves a place among your evil warriors. I'm giving him a Great and a 1/2; he's easily my second favorite figure released this year (Modulok would be my first).

Interested in a Blade figure of your own? He's been sold out on Mattycollector.com for awhile now, but you can still pick on up from Big Bad Toy Store. In the meantime, check out all of our other Masters of the Universe Classics reviews: 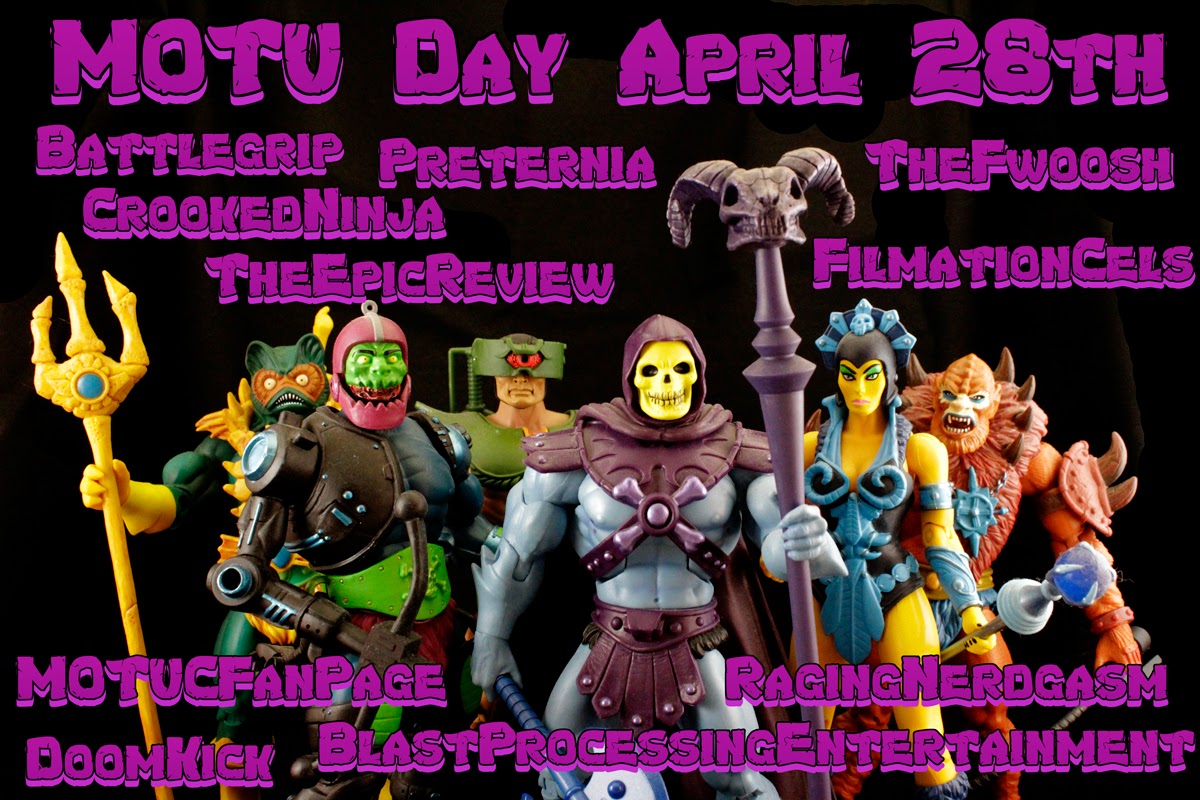 Other sites participating today are: