I Watched This Movie: City of the Living Dead (AKA The Gates of Hell) 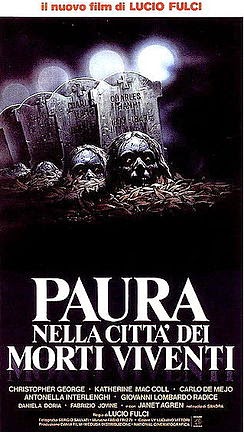 To expand his ever growing body of knowledge, Barbecue17 enrolled in a film appreciation class at his local college. He has been kind enough to send copies of his class assignments to ThEpic Review for days when we just don't have enough content to post.

Movie Thoughts by Barbecue17
The movie I watched: City of the Living Dead (AKA The Gates of Hell)
It was directed by: Lucio Fulci
It was released in: 1980

Please briefly summarize the plot: When a priest named Father Thomas commits suicide in a cemetery in the town of Dunwich, he sets off a series of events that include the dead returning to life, a psychic falling into a comatose state, and a portal to Hell opening up. While an investigative journalist and a psychic try to find the mysterious town of Dunwich, the residents of the cursed town try to survive the strange happenings. As people continue  to die under odd circumstances, the town itself slowly transforms into something out of a nightmare.


How is this film culturally/ historically significant? City of the Dead is considered to be the first film in the loosely related "Gates of Hell" trilogy along with The Beyond and The House by the Cemetery.

What genre would you place this film in? Horror/ Zombies/ Arcane zombies

How did this film make you feel: A little creeped out, particularly by the weird atmosphere, otherworldly snarls, and gory death scenes. There was a scene where a zombie priest causes a girl to bleed from her eyeballs and vomit up all of her organs. I was a little disturbed by this scene as it made me feel very tense, kind of like when I'm watching the doctor draw blood from my arm.

What were the most impactful moments of the film? There's a scene where a guy runs some dude's head into a table mounted drill press. We watch the drill press slowly get closer to the guys head and watch it go all the way through. That was kind of intense. There's also a really good scene where a psychic awakens from a comatose state inside of a coffin that is currently being buried. Someone hears her and helps her escape by hacking apart the coffin with a pick axe. It's crazy.

With what other movies would you compare this film? Many of Fulci's other films, such as The Beyond. I also kept thinking of The Fog and Phantasm.

What stands out about this film? The incredibly creepy zombies and the way they literally pull brains out the back of the heads of their victims, the excellent soundtrack, and the scene where the guy gets a drill through his head.

What message do you believe the filmmaker was trying to convey? Bad stuff happens when priests commit suicide. Also, if your town experiences a sudden onset of fog, unexplainable deaths, and tremors, move somewhere else. Also, zombie priests hate giant wooden crosses.

How would you rate this film? Great.