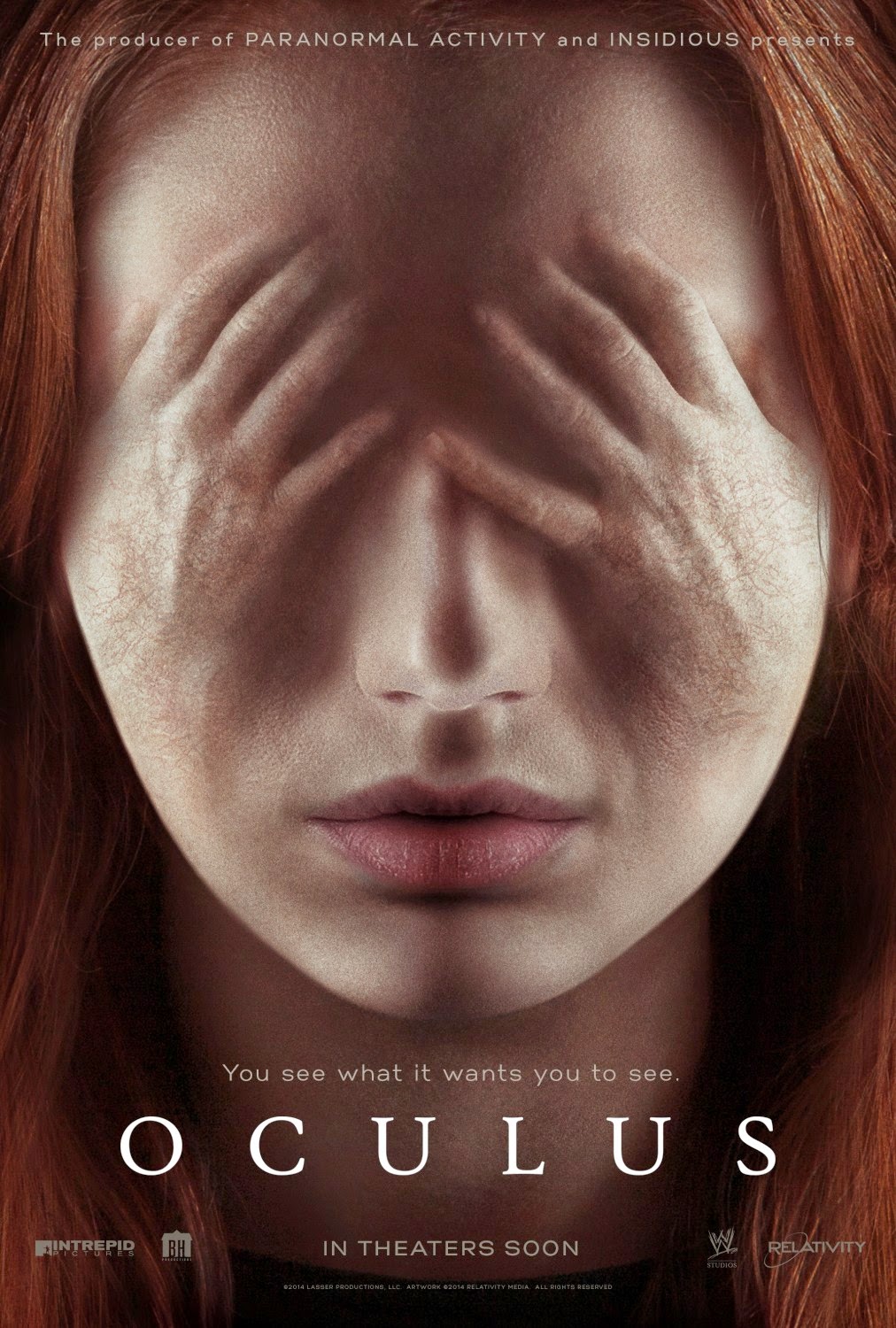 I had really high hopes for Oculus. It seems to have had so much going for it: Great early buzz, a creepy, cursed antique, and Karen Gillan. What's not to like? Oculus is an interesting film as while it initially seems to be more of a ghost story, it actually feels like more of a psychological thriller. Directed by Mike Flanagan and based off of his short film Oculus: Chapter 3-The Man with the Plan, the film revolves around an 18th century mirror called the Lasser Glass that has a long history of tragedy attached to it. Like baby dolls and jack in the boxes, mirrors are just another of those fairly mundane objects that somehow end up being exceedingly creepy when put into a horror context. Is Oculus worth a look or is this one looking glass you should just pass right by? Read on and fight out after the break...

The storyline of Oculus follows siblings Kaylie (Karen Gillan) and Tim (Brenton Thwaites) during two different periods in their lives, both involving their interactions with the malicious Lasser Glass. As pre-teens Kaylie and Tim witness the effect that the mirror has on their parents (Katee Sackhoff and Rory Cochrane), slowly turning their childhood and family life into a nightmare.  As young adults, we see how Kaylie and Tim are both trying to cope with their traumatic childhoods. Their perceptions as to what happened to their family, however, are quite different. While Kaylie is convinced that the Lasser Glass is truly evil and has spent her life tracking it down in order to destroy it, years of therapy and treatment have left Tim convinced that the true evil that destroyed their young lives came from their father.

As we watch the now adult siblings once again confront the mirror, we also witness them confronting eachother with their own versions of what happened eleven years prior. Did the family dog die mysteriously becase its life was sapped from it by the mirror or did it suffer from parvovirus? Was their father having an affair or was there really a mysterious feminine entity in their home? One of the strengths of Oculus, at least for the first half of the film, is that it explores the very different ways in which two siblings perceive the tragedies of their childhoods. Twisting and warping perception is a key feature of the film and it works really well most of the way through. As Kaylie and Tim attempt to study the Lasser Glass, they find a growing disconnect between their true actions and their perceptions of their actions. Like a funhouse mirror, something sinister is warping and twisting the world around them. I don't want to spoil anything, but at one point someone eats a light bulb.What can you do when you can't even trust your own eyes or taste buds?

Oculus has some real strengths to it.  First, the cast is quite good. Gillan is really quite excellent as someone who seems normal, but whom you slowly realize is truly methodical, manipulative, and obsessed with the past (it's also weird to hear her talk without her accent). Sackhoff and Cochrane probably give the best (and creepiest) performances. Playing the parents as remembered by their children, they get the chance to really offer up some oddly menacing moments.  I really appreciate the way director Mike Flanagan chose to weave together Kaylie and Tim's stories rather than having them simply occur as just flashbacks or as an introduction to the film. It really works here and helps to build the suspense as both stories come to a climax simultaneously. Unfortunately, when that climax is reached it seems somehow anticlimactic. The film doesn't have a bad, gimmicky twist ending or anything, but once it's over you'll be wishing for something a bit more satisfying. It's never a bad thing when a film leaves you wanting more, but Oculus ultimately seems a bit disappointing because it never reaches the potential which the first two thirds of the film suggest. It's not a bad film by any means, but it ultimately isn't scary, interesting or clever enough to distance itself from the horror herd.