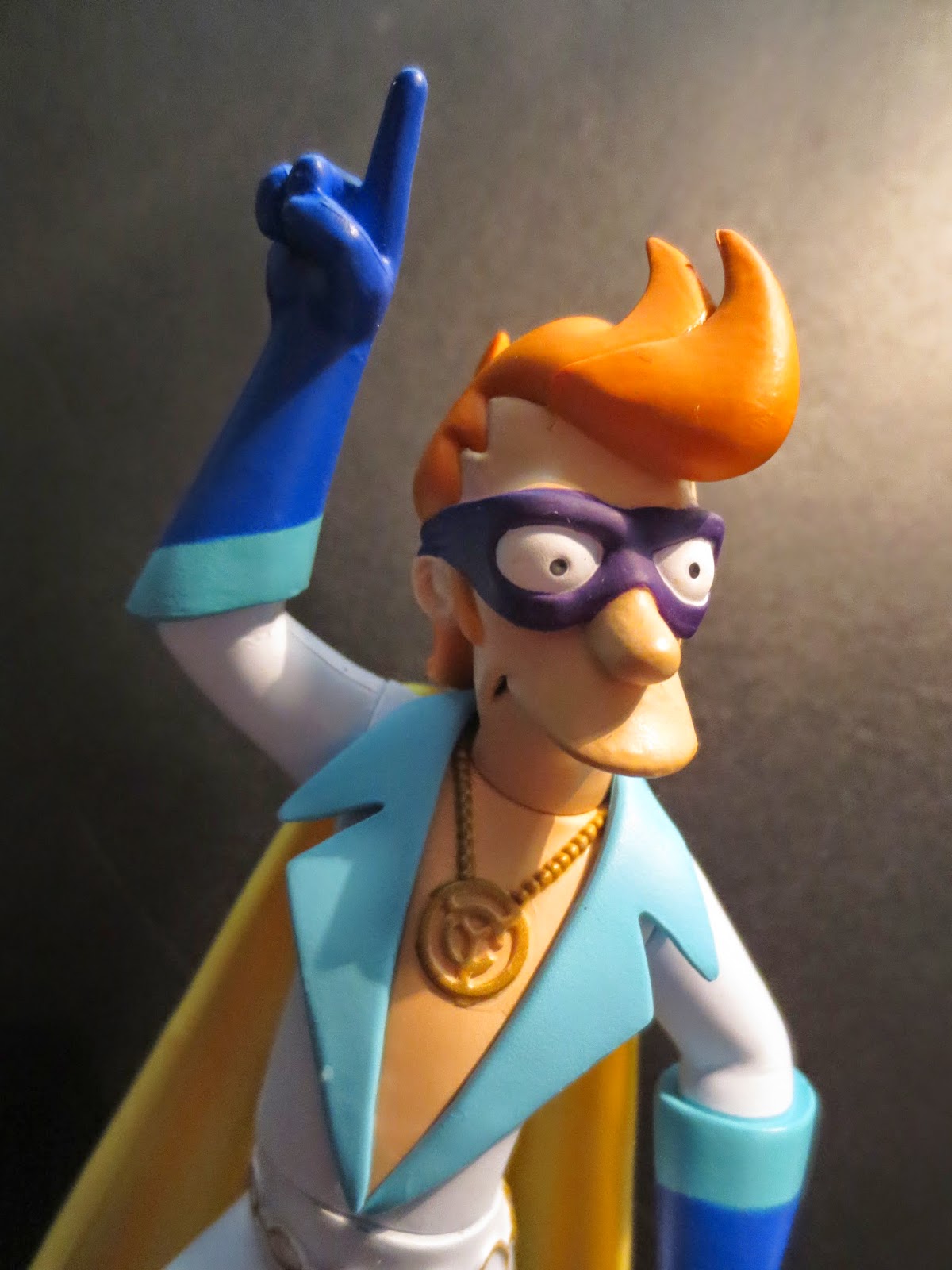 Since I reviewed Nudar from Toynami's Futurama series 4, I figured I'd go ahead and review the other figure from that same series: Captain Yesterday. In the episode "Less than Hero" Fry and Leela develop superpowers after using a tube of Dr. Flimflam's Miracle Cream. Bringing in Bender, they proceed to form the New Justice Team and fight to rid New New York of crime! Using costumes supplied by Bender, Fry garbs himself in disco themed outfit and adopts the moniker of Captain Yesterday. Alongside of Clobberella and Super King, Captain Yesterday uses his lickity speed to protect the future and become a minor celebrity. Does your desk need a fast blast from the past to defend it from super villains? Then check out this review of Captain Yesterday after the break... 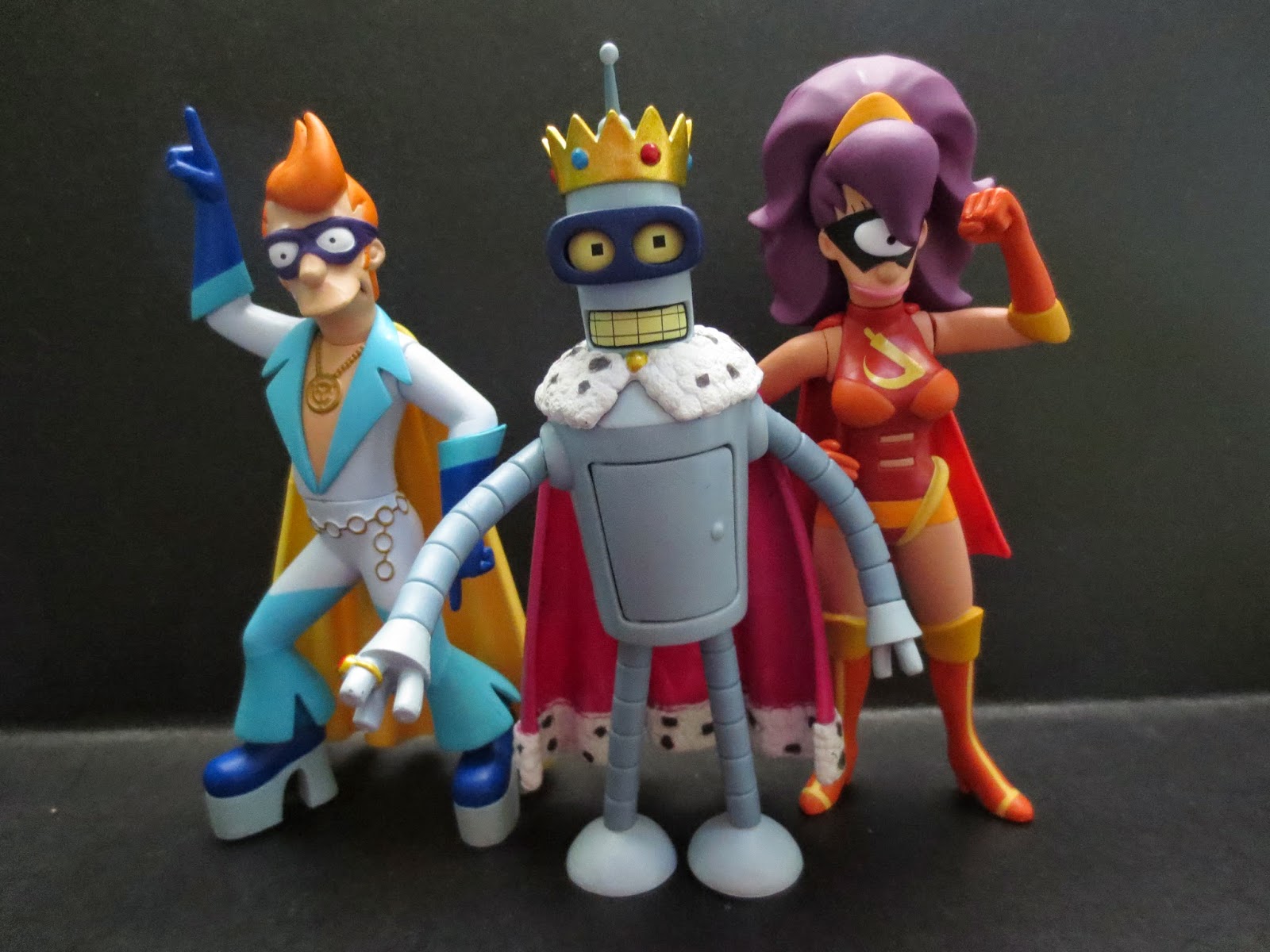 Like with the rest of their Futurama figures, Toynami did a good job of translating the animated character of Captain Yesterday into a three dimensional action figure. Fry is almost 6 inches tall, although some of that extra height is due to his funky hair and his high platform shoes. He's bright, colorful, and would probably go along well with other animated toylines like Mezco's Family Guy. Along with his series-mate Nudar and the other four figures from series 5 and series 6, Captain Yesterday comes with all of the pieces necessary to build Robot Santa. 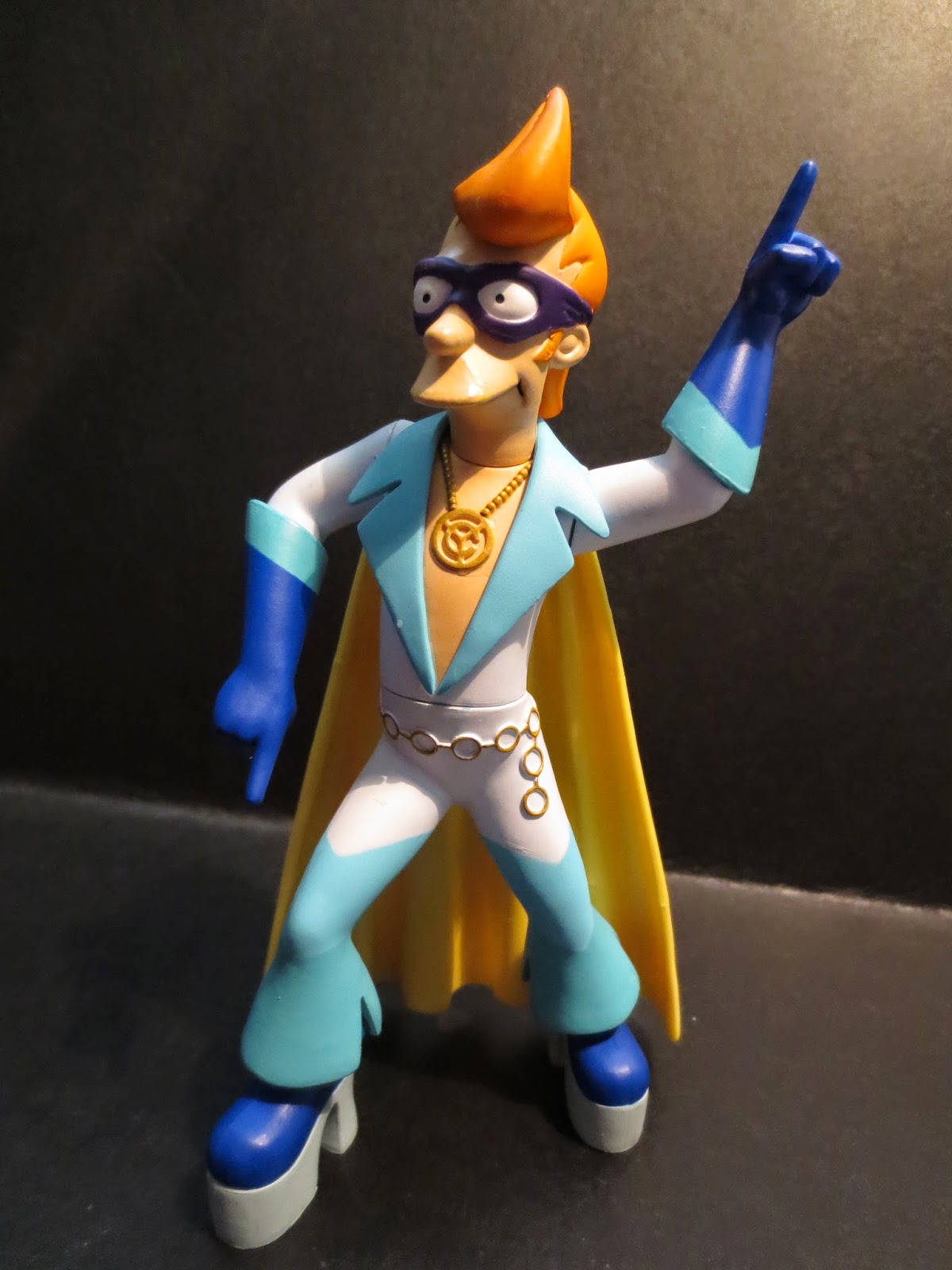 While most of them are pretty sturdy, the Futurama toys definitely don't seem like they're geared towards kids or even your average action figure collector. They're really designed for fans of the show simply be placed on display in your cubicle, toy room, or favorite robot apartment. That being said, their isn't a lot of articulation here. Fry is largely pre-posed, only featuring a swivel waist, swivel shoulders, and a swivel neck. There's pretty much only two poses you can put him in: A disco styled pose with his right hand in the air or with his left hand in the air. Yeah, you can do some minor variations of that, but this guy isn't a fully articulated man of action. Wrist swivels would have been a welcome addition to still preserve the sculpt and style while giving a bit more versatility to the pose. I think the most disappointing thing about this figure, however, is that he doesn't want to stand on his own. I really think it's because of the weight of the cape but Captain Yesterday always wants to fall backwards (back into the past, perhaps?). If he came with a stand I'd be more OK with this issue, but alas he does not. I really like the sculpt of this figure. He's got a great pose that works for the character and has some nice features. The head sculpt is really good. It's a great Philip J. Fry headsculpt with the cool, funky Captain Yesterday hair and the identity hiding mask. Like with Nudar, certain parts of the sculpt are separately molded pieces; here Fry's hair is a separate piece. His costume has some really large lapels, flared gloves and sleeves, and a nice cape to top things off. Oh, and of course there are also the accessories. This disco daddy has a cool medallion sculpted onto his chest and a chain belt. There's a lot of nice, cartoonish detail here that really makes this guy quite appealing. I love unique look of this toy. 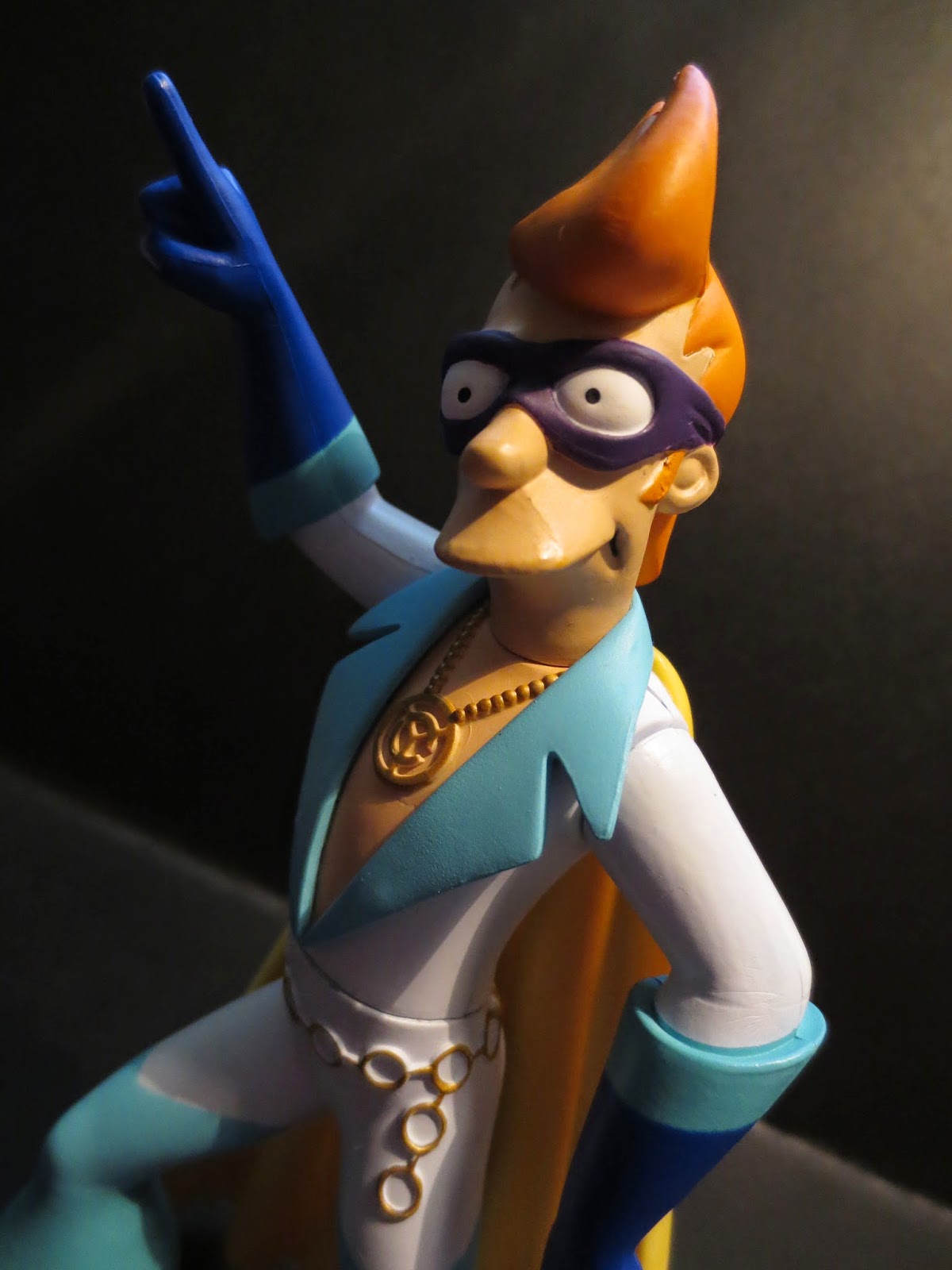 Overall the paint is quite well done. It's bright and bold with a few minor details. The eyes look great and I like the way that dark lines are used to bring out the detail on the mouth. The smaller elements such as the medallion and belt are pretty clean with only the tiniest bit of slop on the medallion. Like a true disco hero, Captain Yesterday stands out from the crowd. 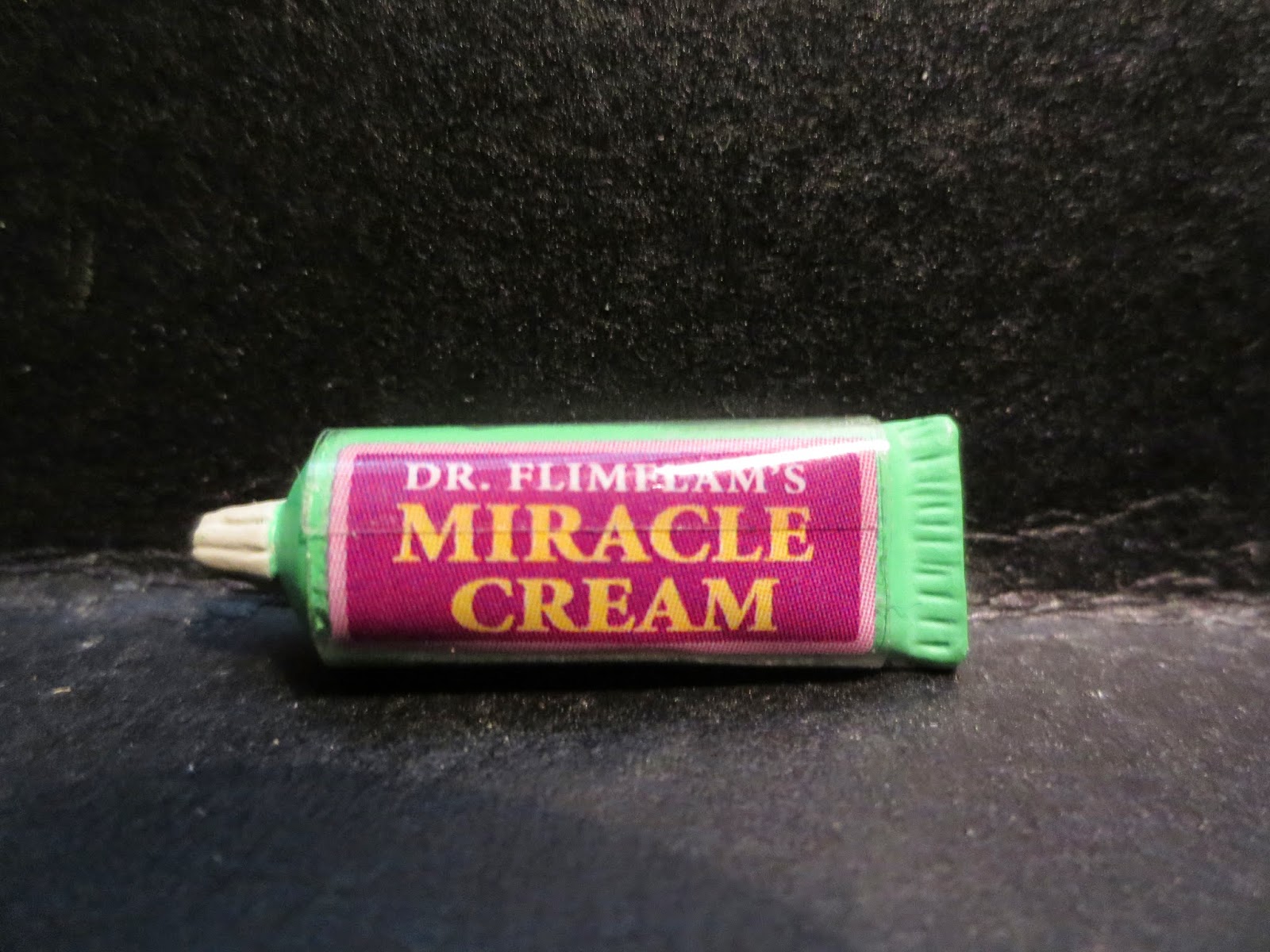 Captain Yesterday comes with one accessory and one build-a-figure piece for Robot Santa. The Robot Santa piece is the head and I'm sure I'll cover it in the future when I look at Robot Santa by himself. The actual accessory for Fry is the tube of Dr. Flimflam's Miracle Cream that Dr. Zoidberg gave to Fry and Leela. It's a simple plastic accessory although it does have a wrap around sticker that's printed with all of the details and images that came on the cartoon version. Unfortunately, Fry cannot hold it. It's an accessory you pretty much just have to leave on the ground at the figure's feet. It's a neat little extra, though. 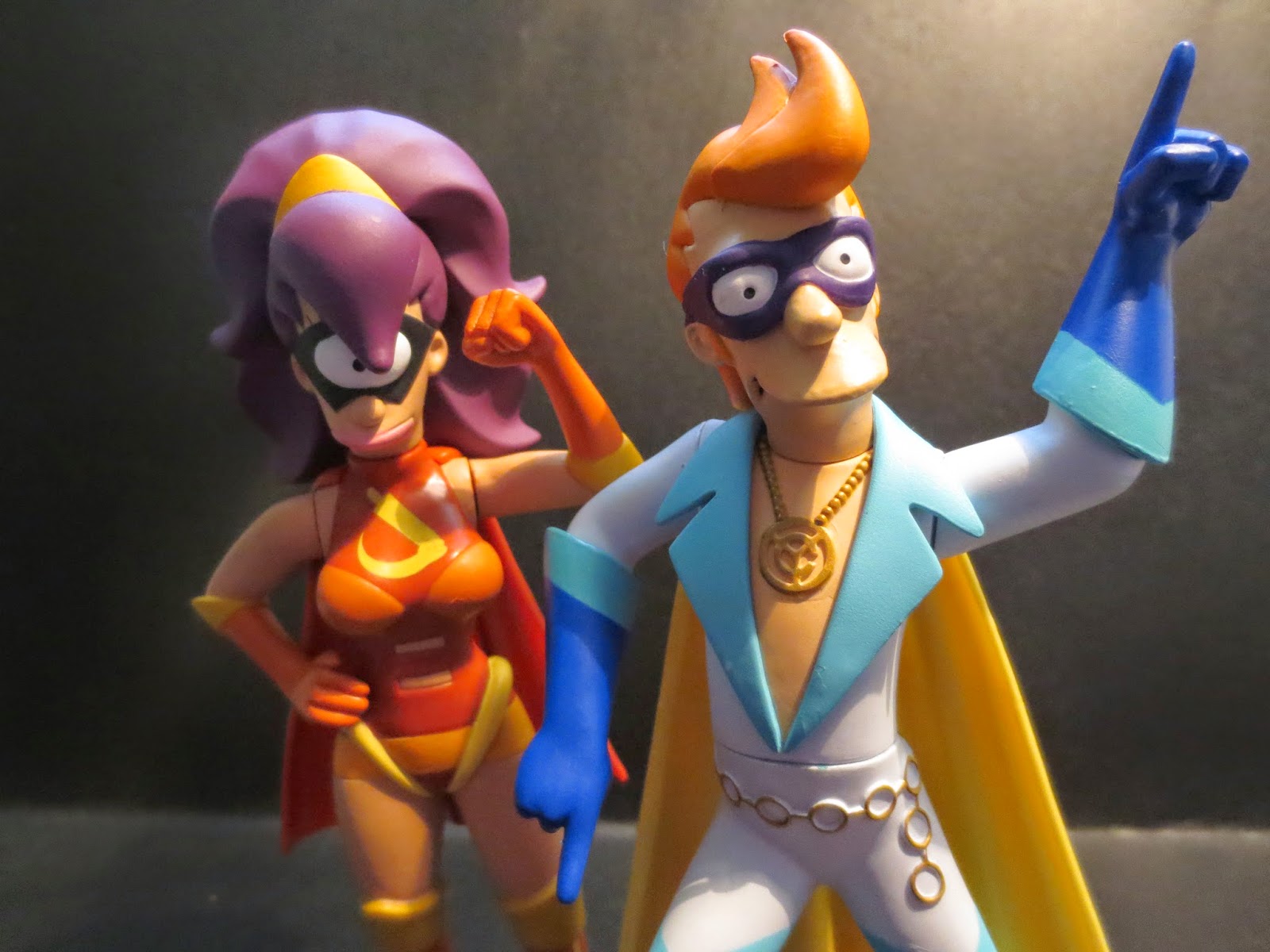 While Captain Yesterday isn't a great action figure, he is a fun one. Honestly, I'm OK with the lack of articulation on a figure like this but the fact that he can't stand unaided bothers me. If you're going to prepose a figure, it either needs to be able to stand on its own or come packaged with a stand. Still, he's bright, colorful, and fun. He also looks awesome posed alongside the rest of the New Justice Team. If you're a Futurama, you probably have a soft spot for these guys and Captain Yesterday isn't bad at all. He's a solid Good and a 1/2 figure. Just remember this about Captain Yesterday:

Also he is from the past,
Not just fast but from the past
Captain Yesterday!”
If you're interested in a Captain Yesterday of your own, head on over to Big Bad Toy Store or Entertainment Earth and pick one up alongside of his series 4 partner, Nudar, who I just reviewed this week. Both stores have a ton of other cool Futurama stuff, too, so check them out!