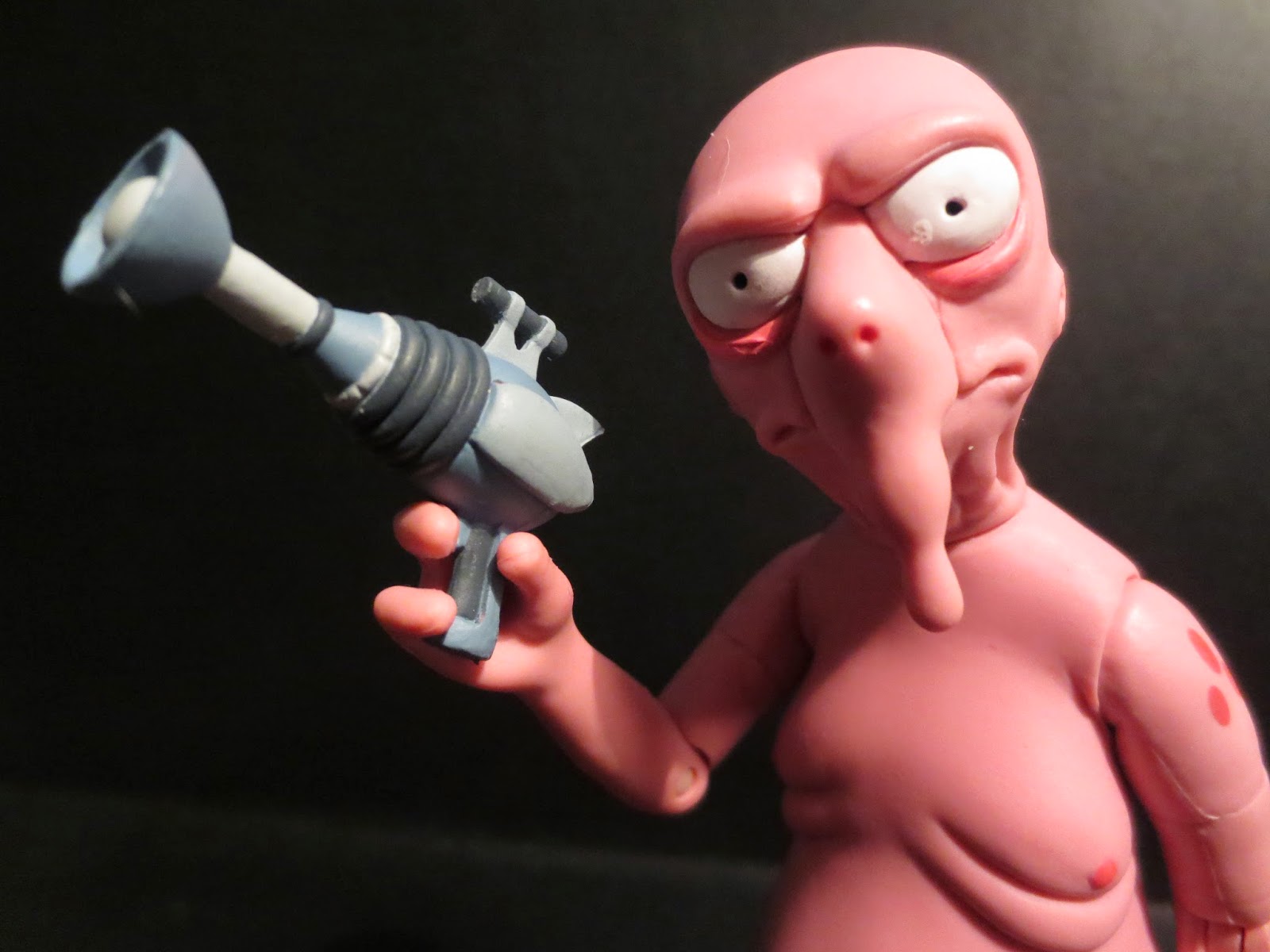 Of all of the animated comedy shows that have appeared on prime time, Futurama is my second favorite (#1 goes to King of the Hill). I've been watching back through the series again and catching a number of the episodes I had missed when the show was relaunched on Comedy Central; man, there are some real tearjerkers in Futurama! A few weeks ago I decided I wanted to pick up a few more Futurama figures, so I began searching the internet. I've owned Bender and Kif for quite some time but hadn't realized how expensive some of these figures had gotten! Try and find a Zap Brannigan or a Dr. Zoidberg for anything resembling a reasonable price. It can't be done! Fortunately, though, I found an interesting deal that included the all six of the series four, five, and six figures plus the Robot Santa build a figure for only $60. It had some of my favorites such as Amy Wong, Calculon, and all three members of the New Justice Team. It also had the subject of today's review, Nudar. Don't get me wrong, I have nothing against Nudar (voiced by David Herman, AKA Michael Bolton from Office Space) as he was a pretty significant character in the film Bender's Big Score, but he's definitely a one-shot character that doesn't have the kind of fan love that other characters have. Since he's easily my least favorite figure in the line, I figured I'd review him first. Ready for a closer look at the Nudist Alien Scammer leader Nudar? Then join me after the break.... 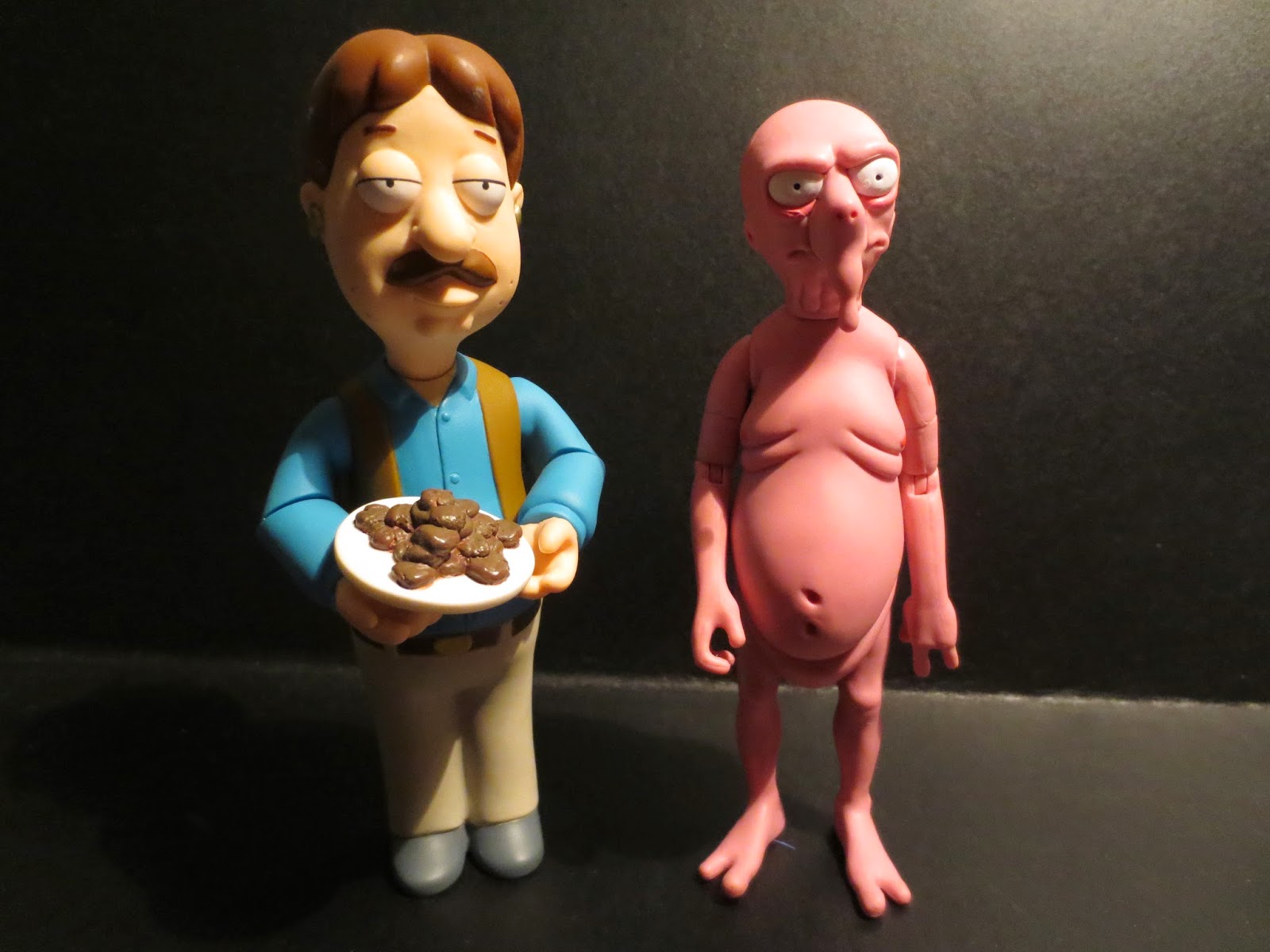 It can be really difficult to translate an animated character into a three dimensional, but more often than not Toynami seems to do a pretty good job at accomplishing that goal. Nudar stands around 5 7/8ths inches tall and has an animated appearance that might make him a good fit with other similar lines like Mezco's Family Guy figures. Strangely Toynami chose to have each series only include two figures, so Nudar was released in October of 2008 alongside of Fry as Captain Yesterday. 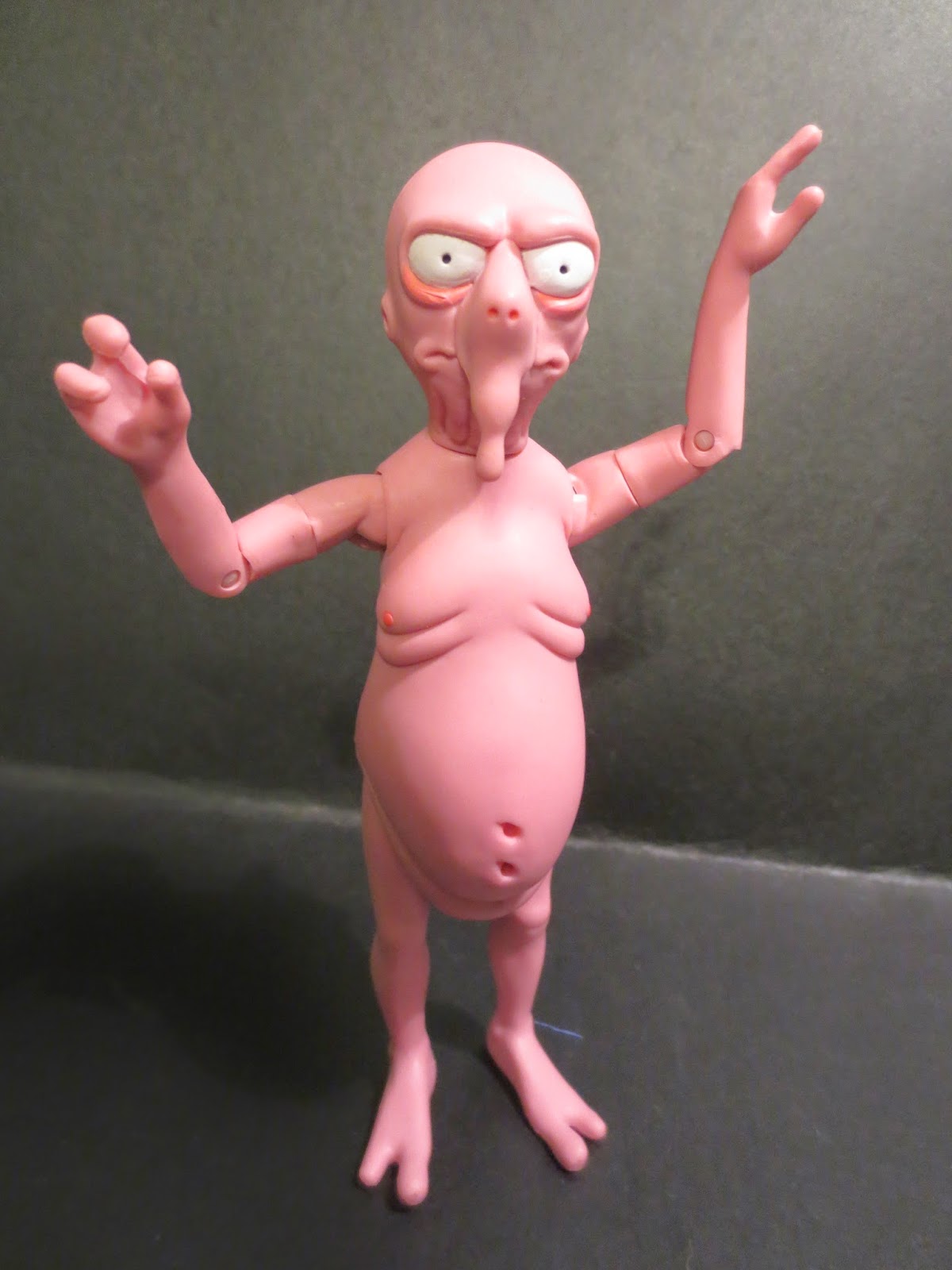 While most of the Futurama figures have unique sculpts, they don't offer very much articulation. Nudar includes the following points: swivel/hinge shoulders, swivel biceps, hinged elbows, and a swivel neck. While everything feels nice and solid, there really isn't much action you're going to get from this figure. He's more designed just to stand around on your desk or shelf and look funny.The arms are fairly expressive, so you'll at least be able to get a few decent shooting poses with him using his space blaster. 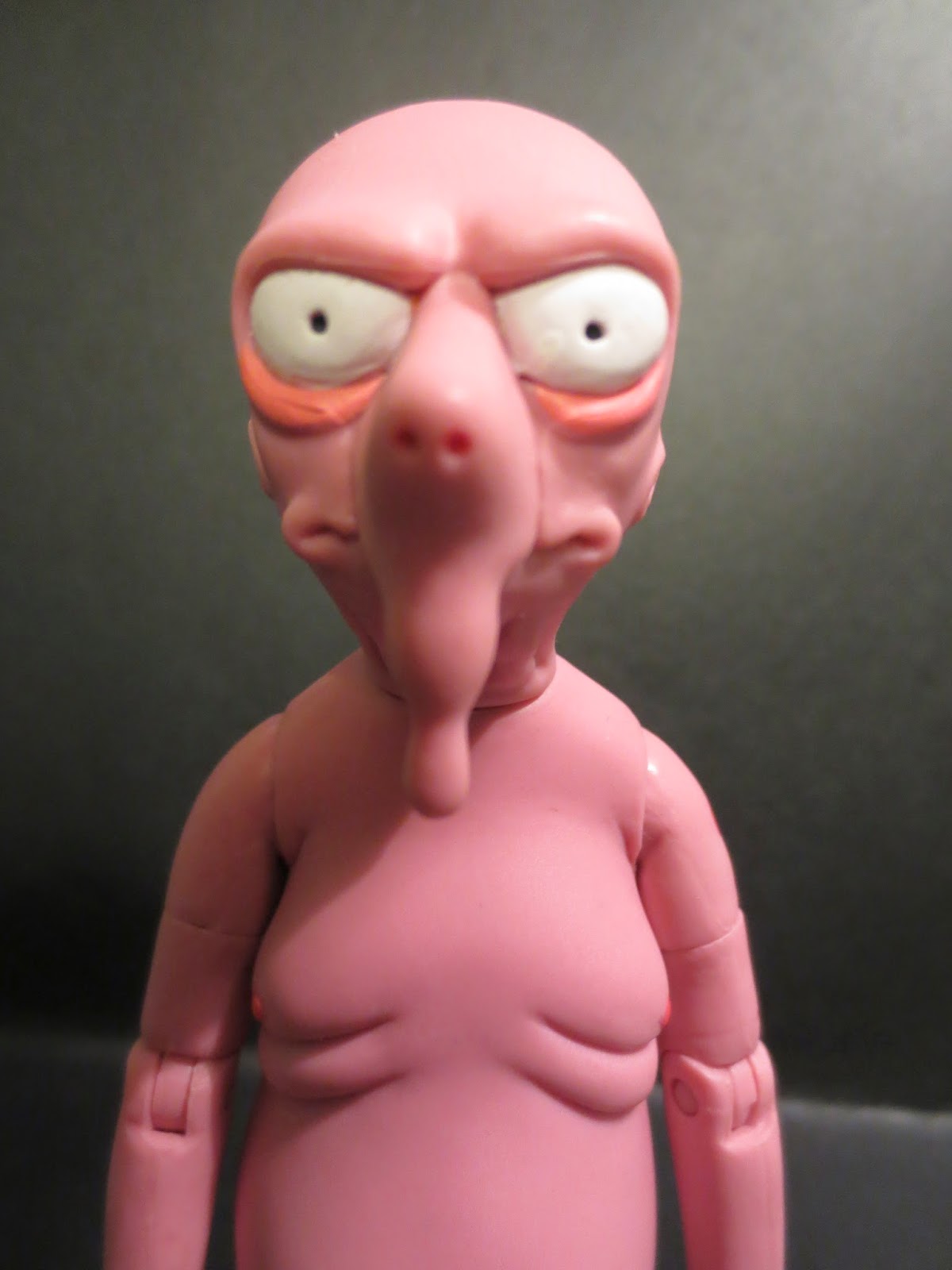 While Nudar is a gross looking character (I mean, c'mon! He's an overweight, nude, pink alien) Toynami did do a pretty good job of nailing his appearance. Like a good villain, Nudar has a very sour expression on his face. Interestingly, the figure looks to be assembled from a few separately molded pieces. Nudar's eyes and nose look to be a separate piece glued into his head and his legs and waist bulges are also a separate piece. It's a little noticeable, but not a complete killer. Overall the figure has a fairly smooth, animation like texture but his various bulges, fat rolls, and the gill like slits on his neck are all effectively captured. He really does look like the old guy in a community swimming pool locker room who just thrives on making everyone else uncomfortable by displaying his carefree attitude towards nudity and boundaries by engaging everyone completely naked. That might be kind of disturbing, but so is Nudar. 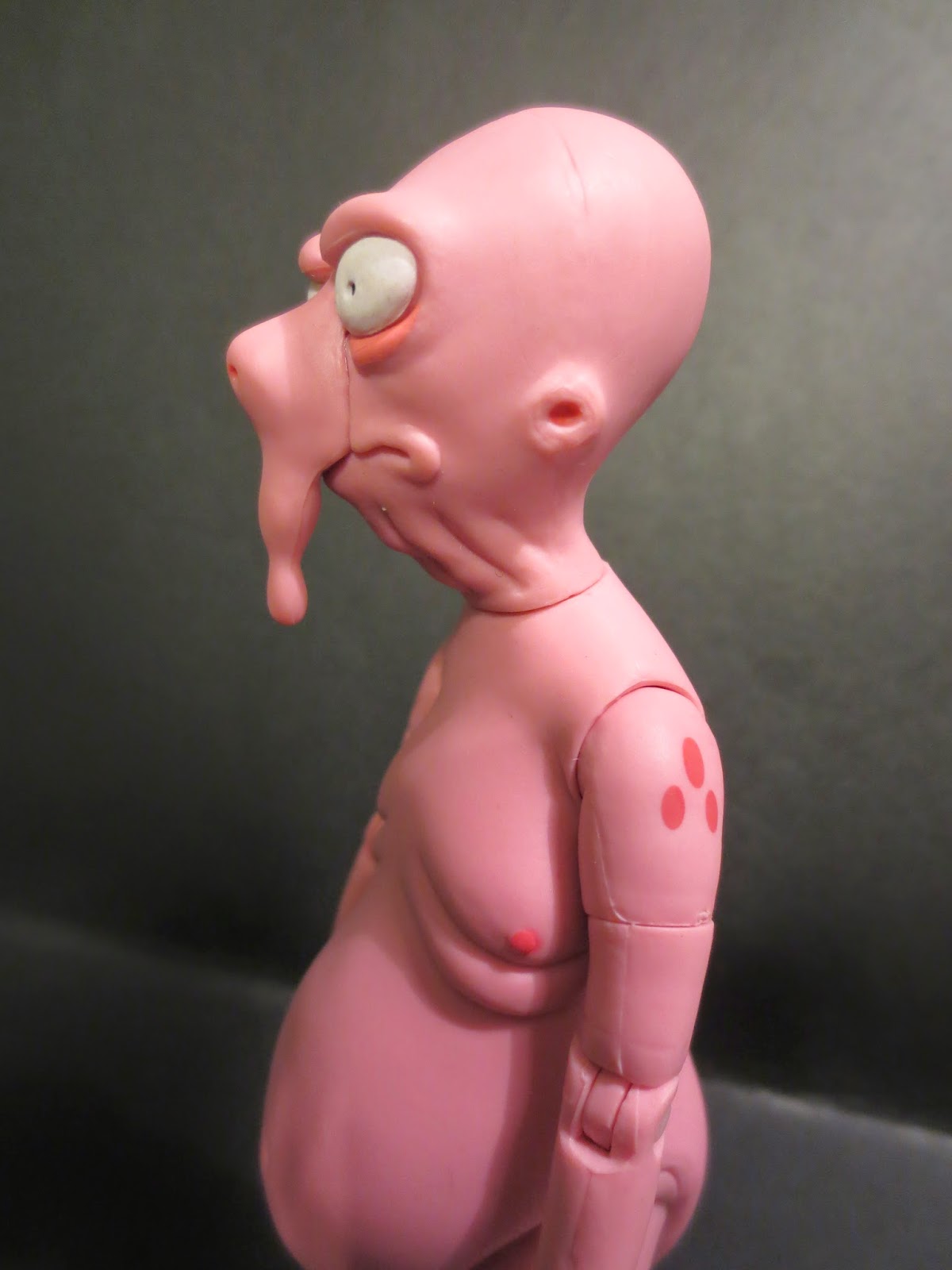 The majority of the figure is simply molded in a very pleasant pink plastic. Well, it'd be pleasant if this were a figure of anything else other than an overweight, nude alien. Other than that, the only paint apps are small reddish details such as the liver spots on his shoulders, his two navels, his ears, and his nostrils and the whites of his eyes. He has little black pupils and brighter pink bags under his eyes. There's nothing terribly impressive here, but everything works just fine and looks fairly neat and clean. Well, the white paint on his left eye is a bit gloppy but that's a fairly minor issue. 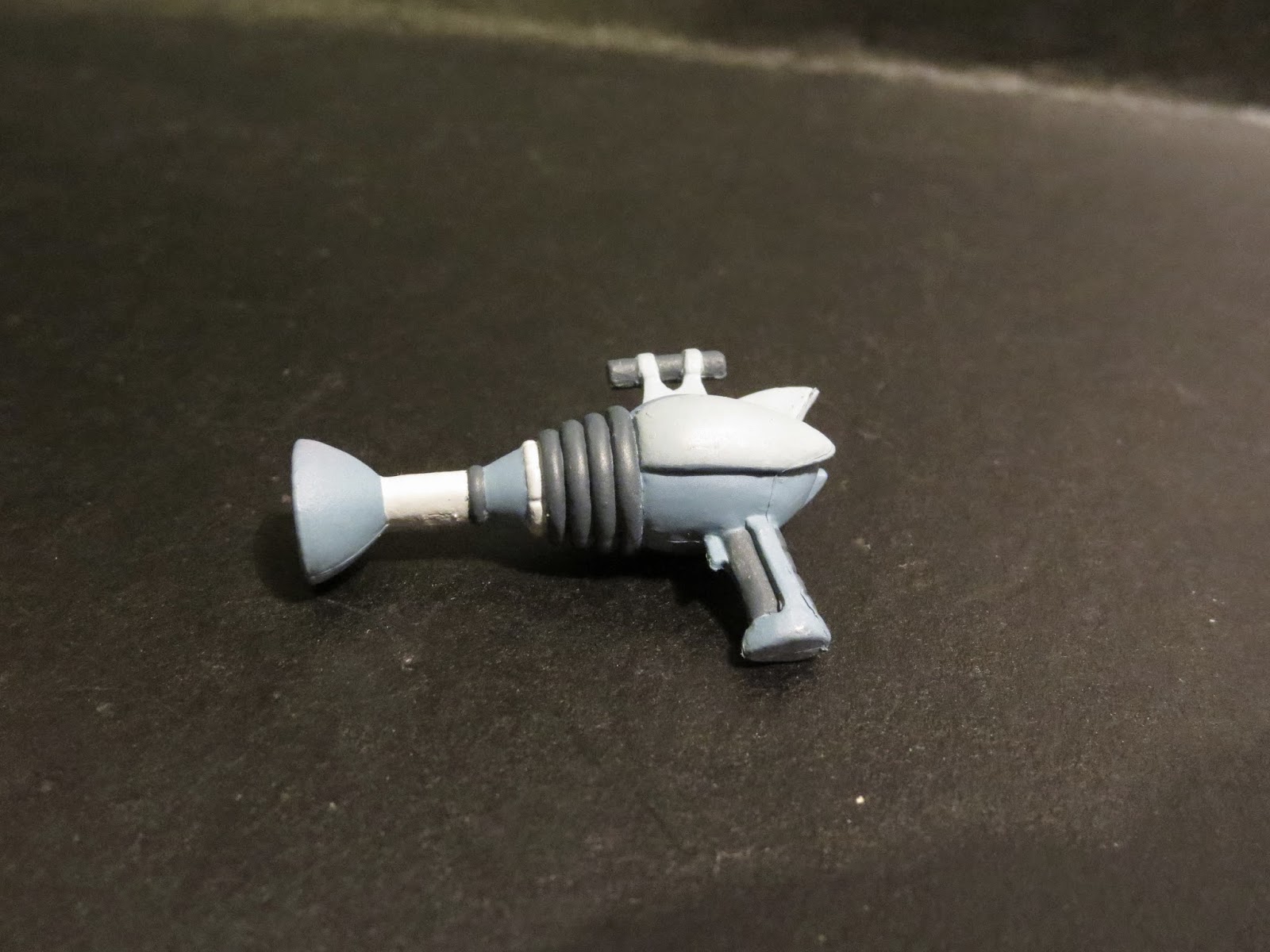 Nudar comes with two accessories: a blaster pistol and the torso for the build-a-figure Robot Santa. The torso is a fairly large piece, and if I get around to reviewing it I'll cover it in greater detail. I'm really a big fan of Nudar's pistol, though. It has an excellent retro-futuristic sculpt and quite a few little paint details. I'm counting three different colors on this little accessory. It fits tightly in Nudar's right hand and definitely gives the figure something to do besides just standing around naked. 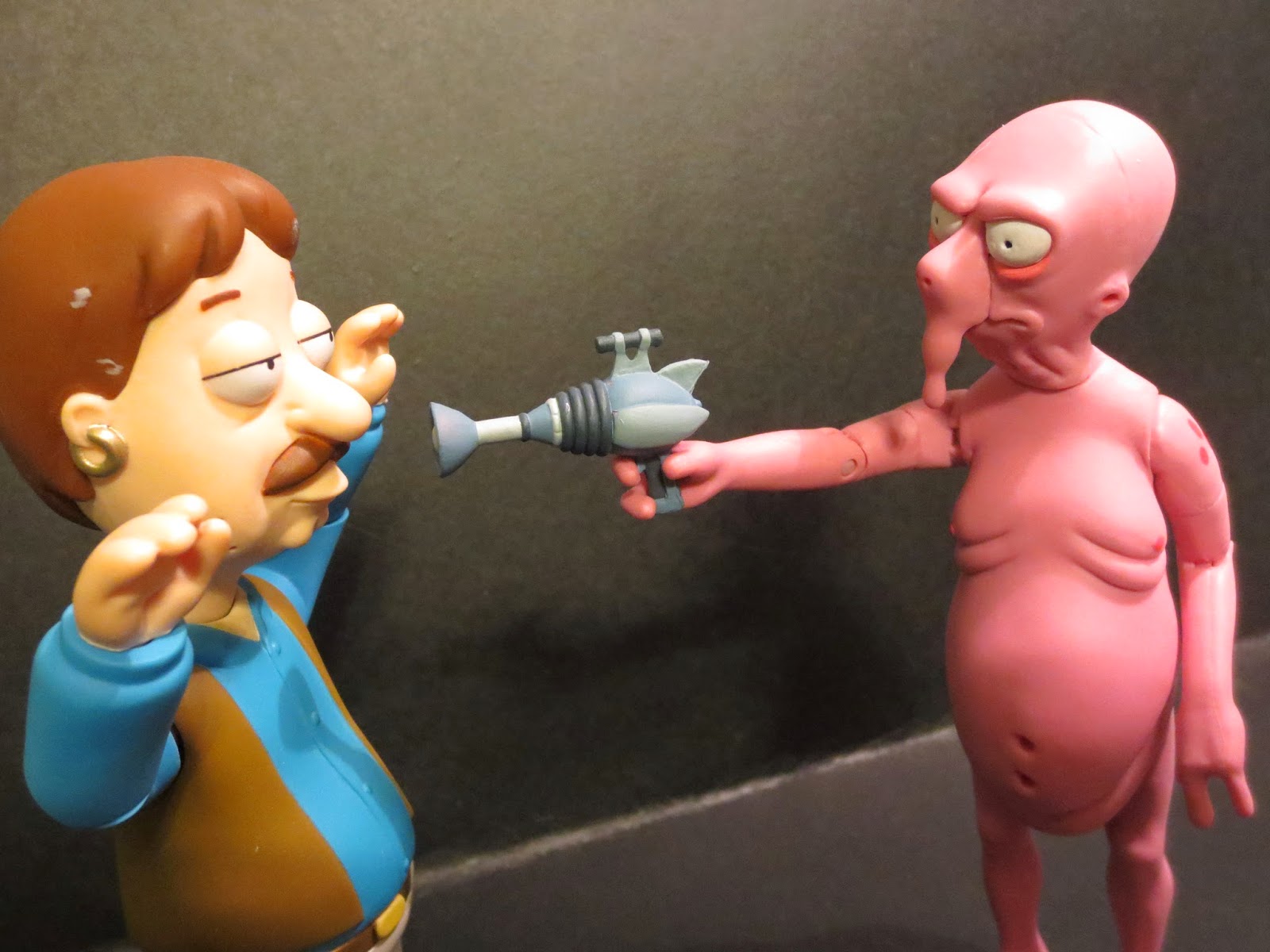 Nudar isn't a bad figure, but he's definitely a character that I'm a bit surprised made it into this line. I guess I can understand that at the time he was probably being designed he was the major bad guy from the then upcoming Bender Big Score, but ultimately he didn't end up really making the kind of impression where he became a character I'm eager to display on my desk. He definitely feels like one of those figures released in a toyline that probably cost us a better character. Anyways, Nudar has an appearance that nicely replicates his animated appearance, a cool blaster, and some decent paintwork, but he's also got some oddly noticeable separately molded parts (particularly his face), some lacking articulation, and is really just a character design I'm not overly sold on. Overall, I'm giving Nudar an Eh and a 1/2. He's honestly a figure I bought as part of a set because 1. It was cheaper to do so then to buy most figures I wanted individually and 2. I needed the torso for Robot Santa. In the end, I think your like, dislike, or apathy towards Nudar is really what determines how you'll feel about this figure. 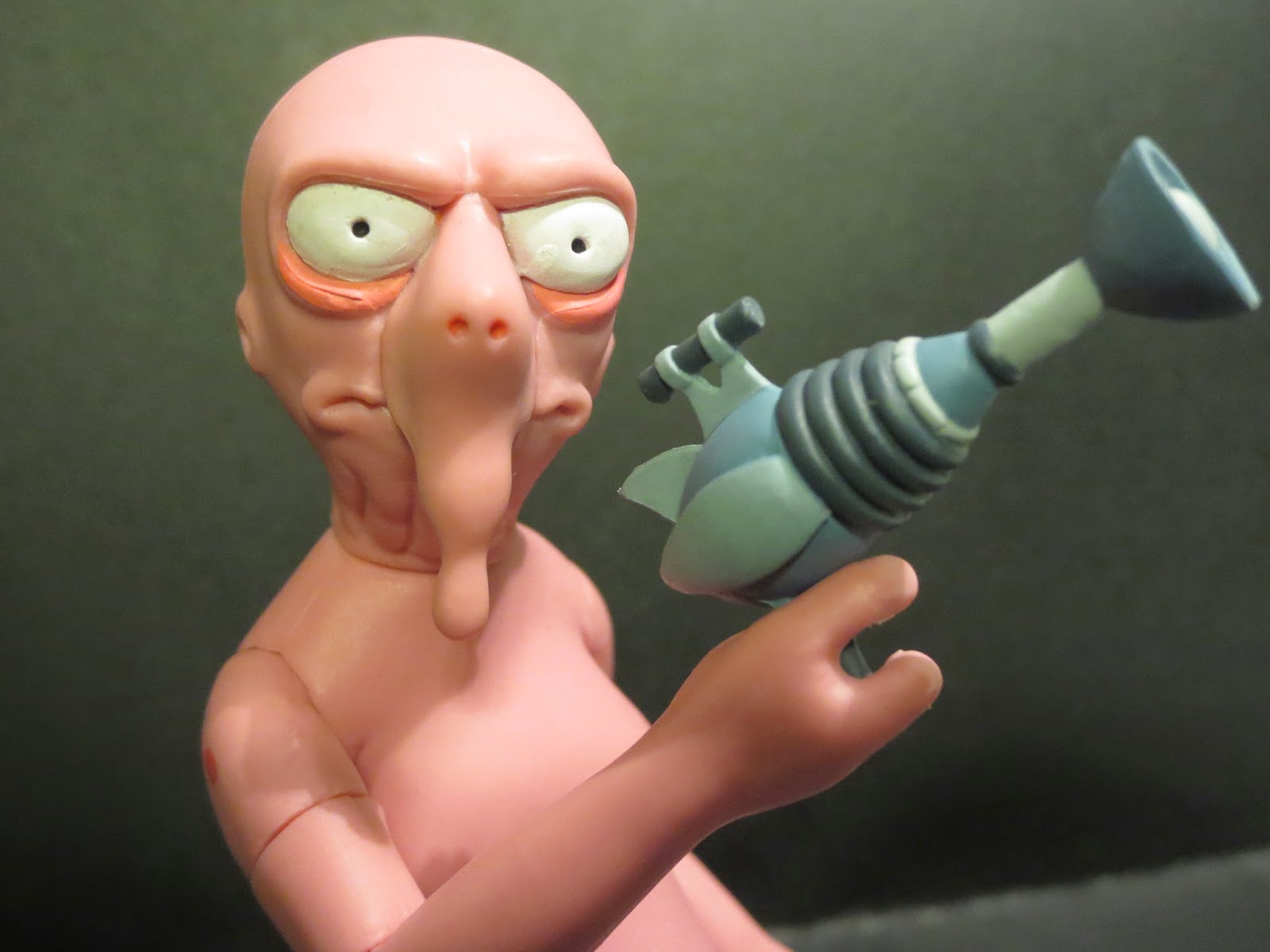 If you're interested in a Nudar figure, head on over to Big Bad Toy Store. They have him as part of a set with his series mate Fry as Captain Yesterday for $20.99 (about $10.50 a figure) along with lots of other Futurama merchandise available. Entertainment Earth also has the set and lots of other goodies available here!