Toy Review: The Tumbler-Camouflage Version from Hot Wheels by Mattel 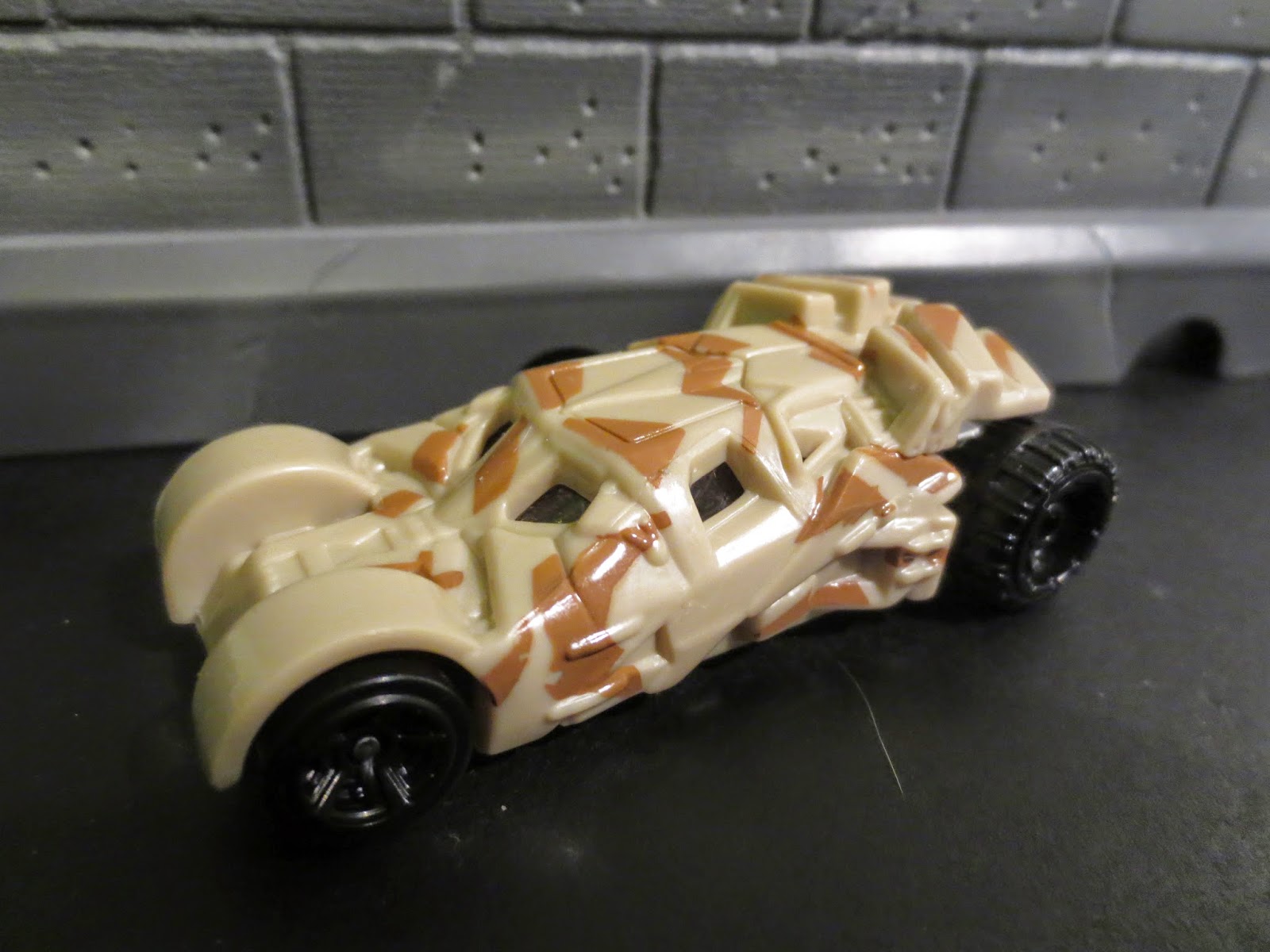 While I may have had a few Hot Wheels and Matchbox cars when I was younger, I was always a kid who preferred action figures to toy cars. I'm really not a car guy unless we're talking something awesome like the Ecto-1 (I've sat in and had my picture taken with the real deal), the Shaggin' Wagon from Dumb and Dumber (also had my picture taken with the real deal), or the Batmobile (I've been near quite a few real Batmobiles and have pictures somewhere to prove it). If it's something awesome like that, I'm in like Flint. Fortunately, today we are looking at a new Hot Wheels version of the Batmobile. Well, the Tumbler anyway. It's the camouflaged version so whether or not it actually counts as the Batmobile is definitely a topic worth addressing. This can either be a pre-Batmobile Tumbler from Batman Begins or one of the three Tumblers stolen by Bane from Wayne Enterprises in The Dark Knight Rises. I guess the choice is up to you! The logo on the package of this Hot Wheels Tumbler is for The Dark Knight Trilogy. While Mattel has released some more expensive small scale Batman vehicles in the past, this little guy was less than $1 before tax. Ready to check it out? Then join me after the break... 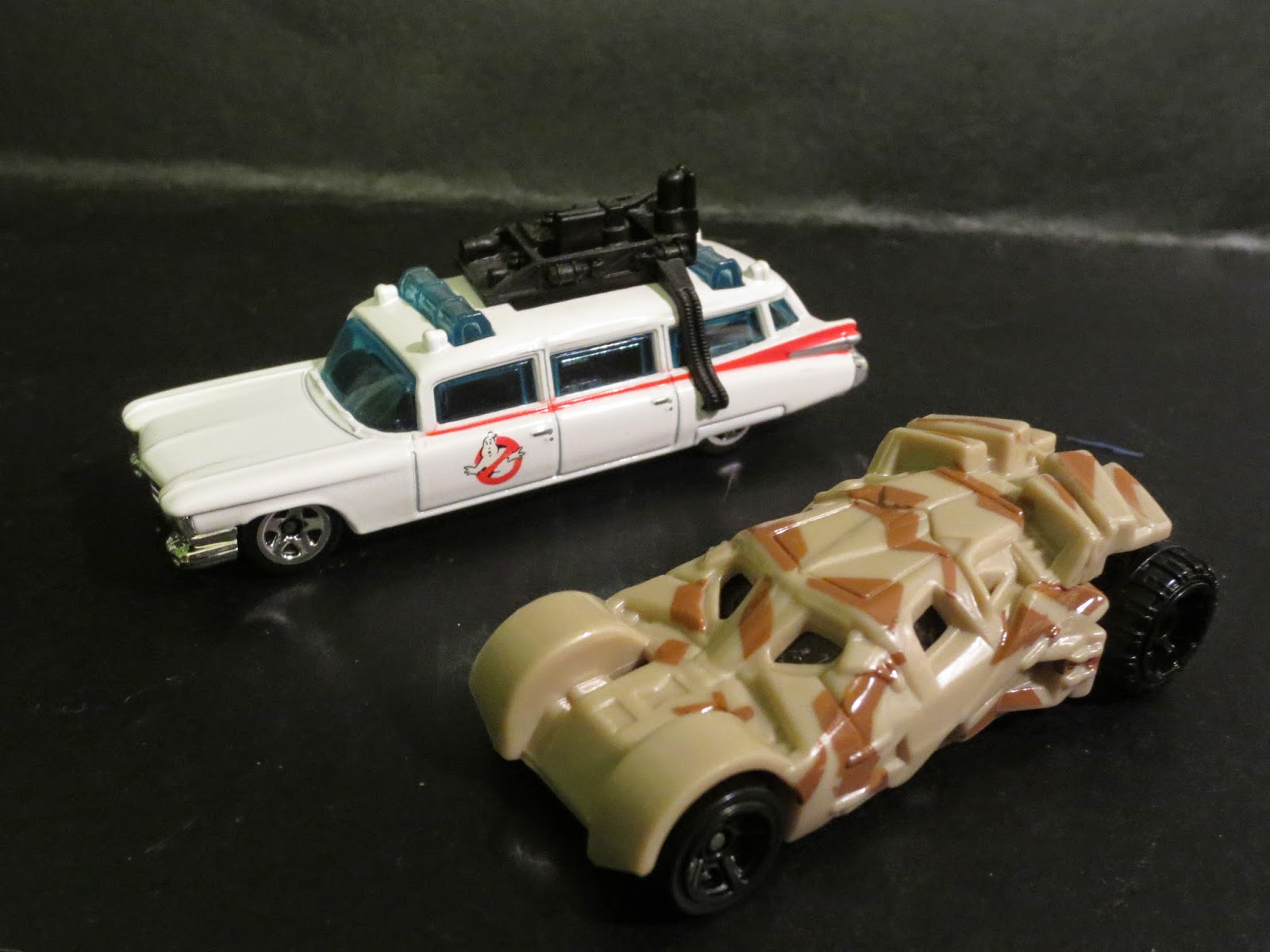 Traditionally Hot Wheels cars are in the 1:64th scale. While the actual Tumbler was 15 feet long and 9 feet wide, the toy itself is only 2 1/2 inches long and 1 inch wide. It's definitely a little smaller than it should be, but it doesn't look disproportionate. The car comes on small blister card with a rendering of the Tumbler on it. It's part of the HW City collection and is listed as vehicle number 63/250 in the set. 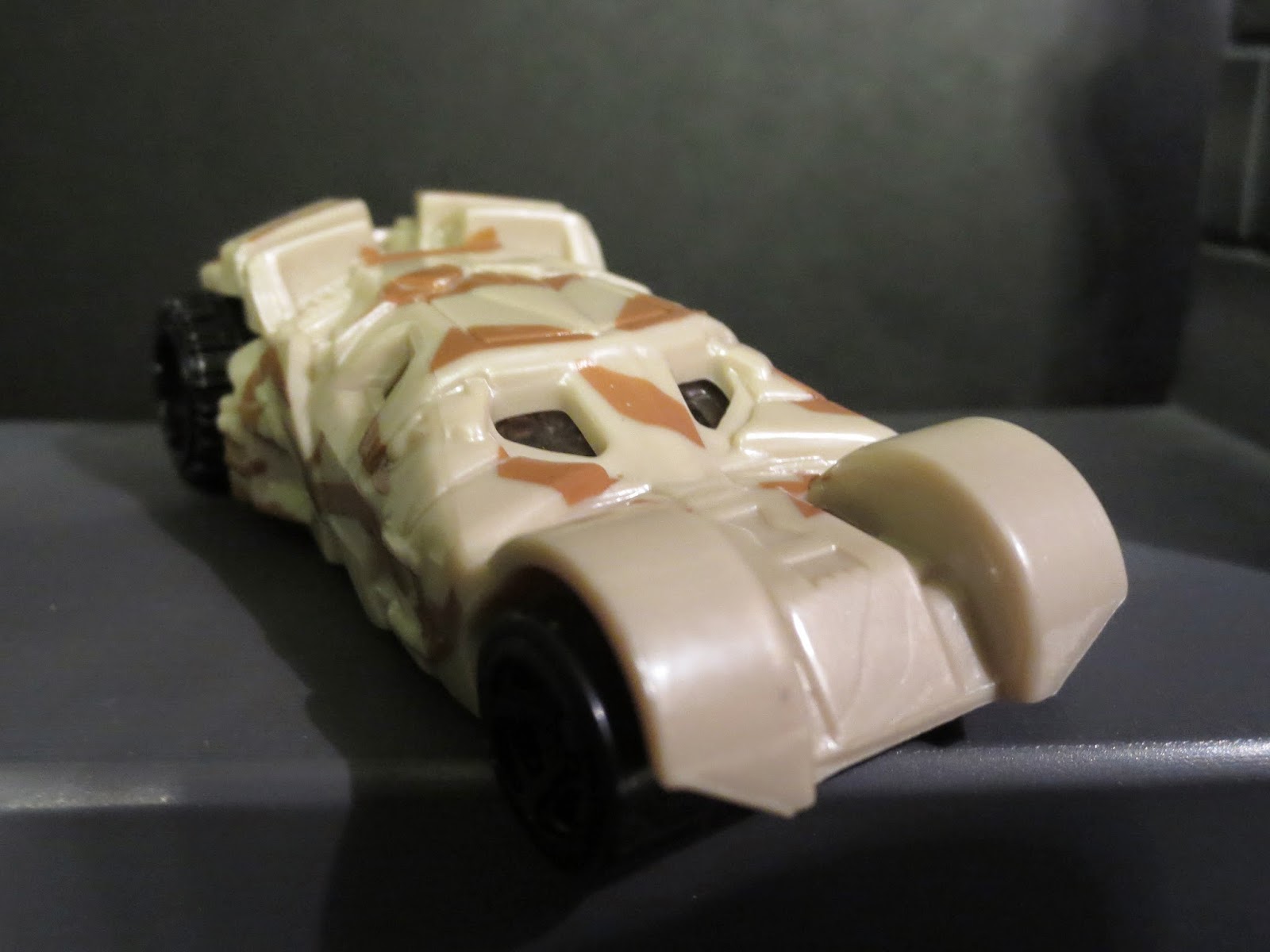 Interestingly, the body of the car is not diecast metal, which I kind of thought was Hot Wheel's gimmick. The chassis and axles are, but the body, tires, and internal bits are all plastic. The four wheels on the Tumbler roll quite well (the little bugger is surprisingly fast and smooth in its movement) and overall it seems like a fairly solid little vehicle. Unfortunately, I'm not complete sold on the appearance. The back 3/4 of the Tumbler looks OK. I completely understand that Mattel has released plenty of more expensive and detailed Batman vehicle replicas for discerning collectors and I realize that this is simply an impulse buy item sold for less than a $1, but the way the front of the vehicle is designed bugs me a great deal. While the rest of the car has nice, fairly detailed armored elements, the front fenders are large and flat with no detail. They look nothing like the front of the Tumbler as depicted in the films. It's really quite bizarre. 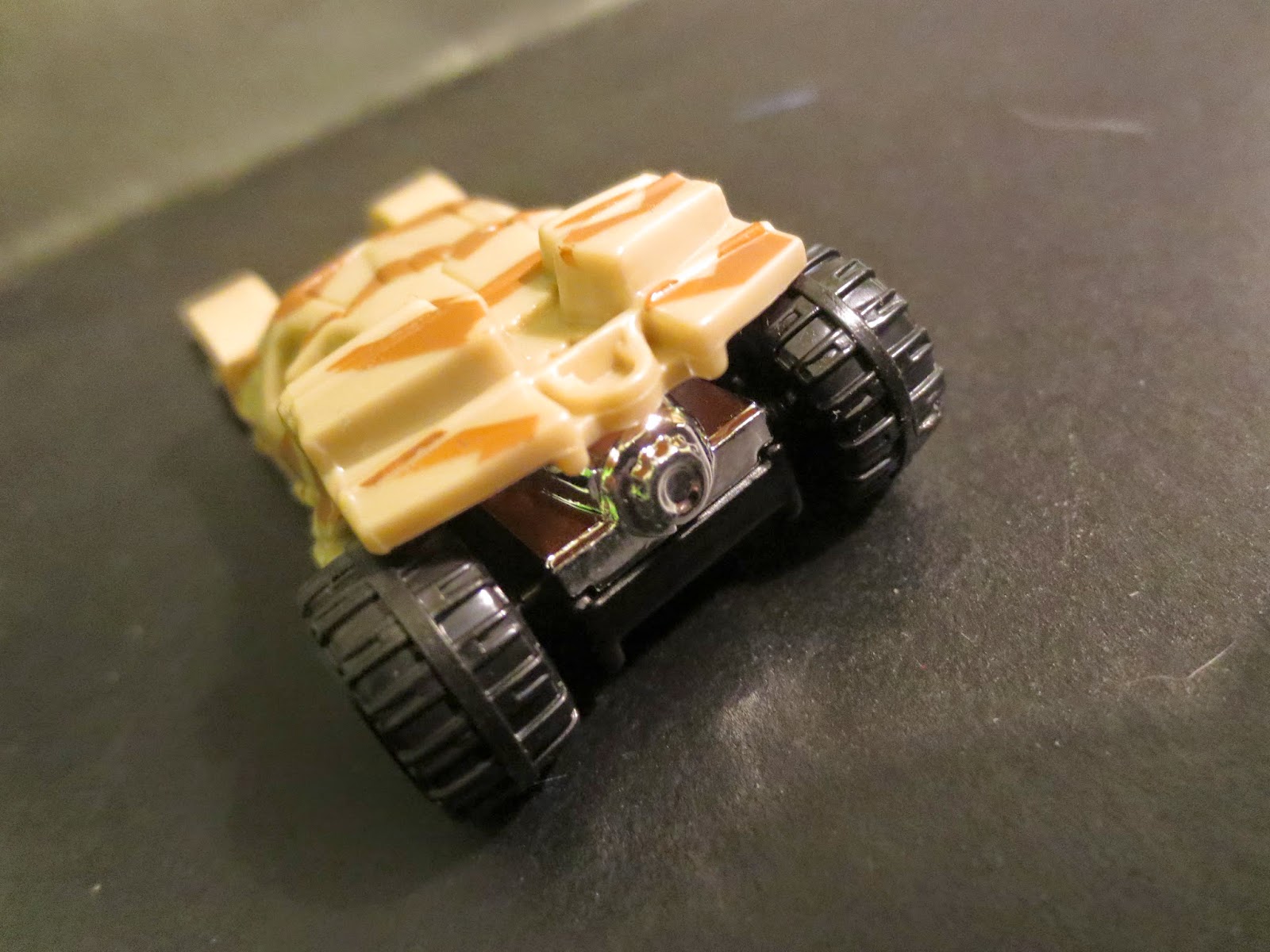 As noted above, this is the version of the Tumbler that is painted in a tan and brown desert camouflage paint scheme. Remember, the vehicle was originally developed by Wayne Enterprises as a vehicle for the U.S. military, so it makes sense that with the Dark Knight Trilogy being set in the mid 2000's to early 2010's the paint pattern would be suited for the desert environments where most U.S. military campaigns were taking place. I like the look of it, but I wouldn't be surprised if Hot Wheels has already released or plans to release this model in the more iconic black color scheme (or maybe a very, very dark grey). 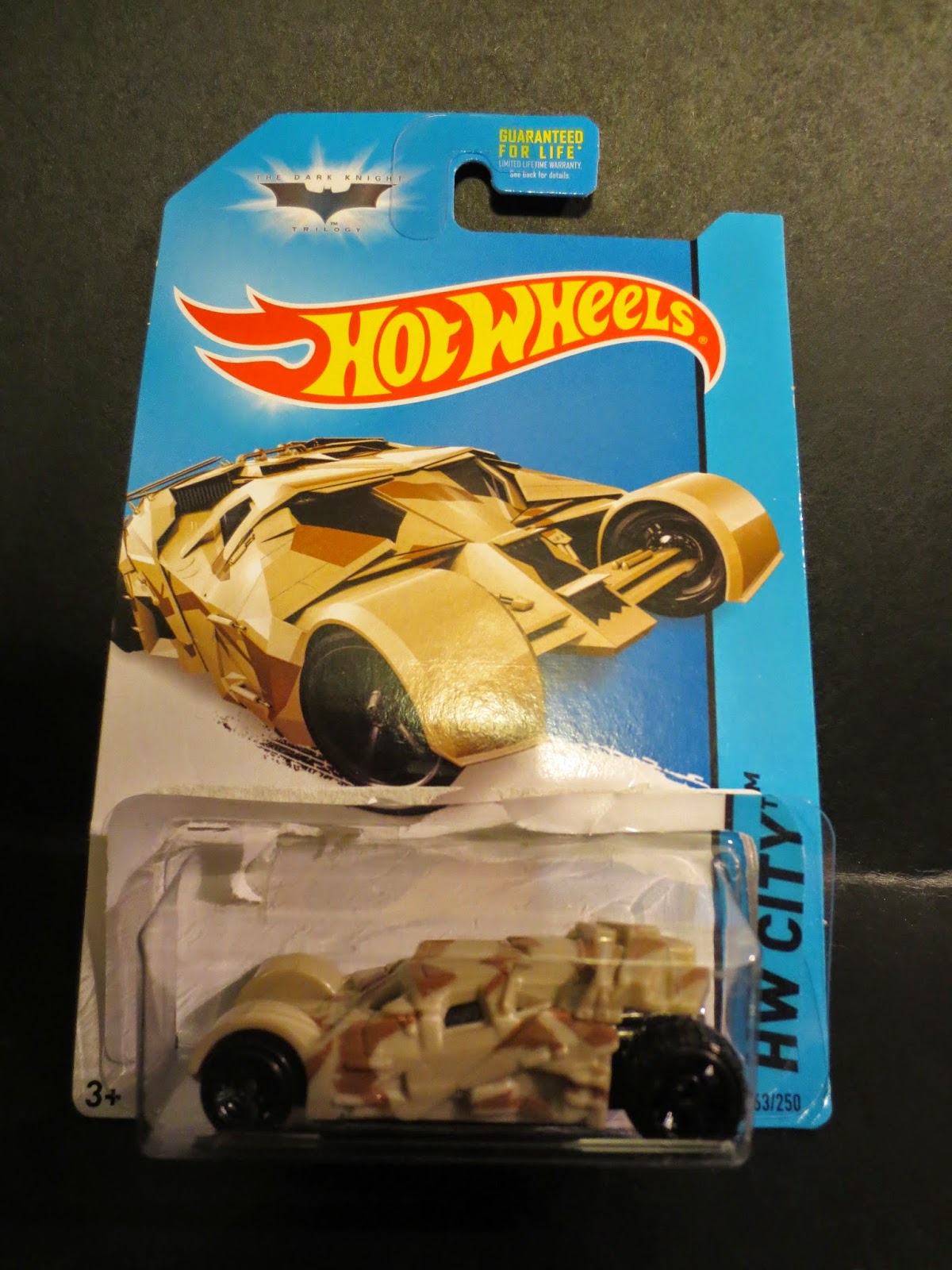 Honestly, despite not liking the redesign of the front of the Tumbler, this is a pretty neat little Batman collectible that costs less than a dollar. If you're a fan of the Dark Knight Trilogy, a collector of Batmobiles, or a Hot Wheels enthusiast, I doubt you'll really bat an eye at dropping less than a $1 for this. Whether you leave it in the package or take it out and display it, it's not a bad deal. It's certainly not the best Tumbler in this scale (or at least in a similar scale) but it's also not expensive. Overall, I'm giving it a Good and a 1/2. It's a fun little trinket for a Batman collection that's relatively inexpensive. I'm glad to own it, although I am now wondering if it comes in black.... 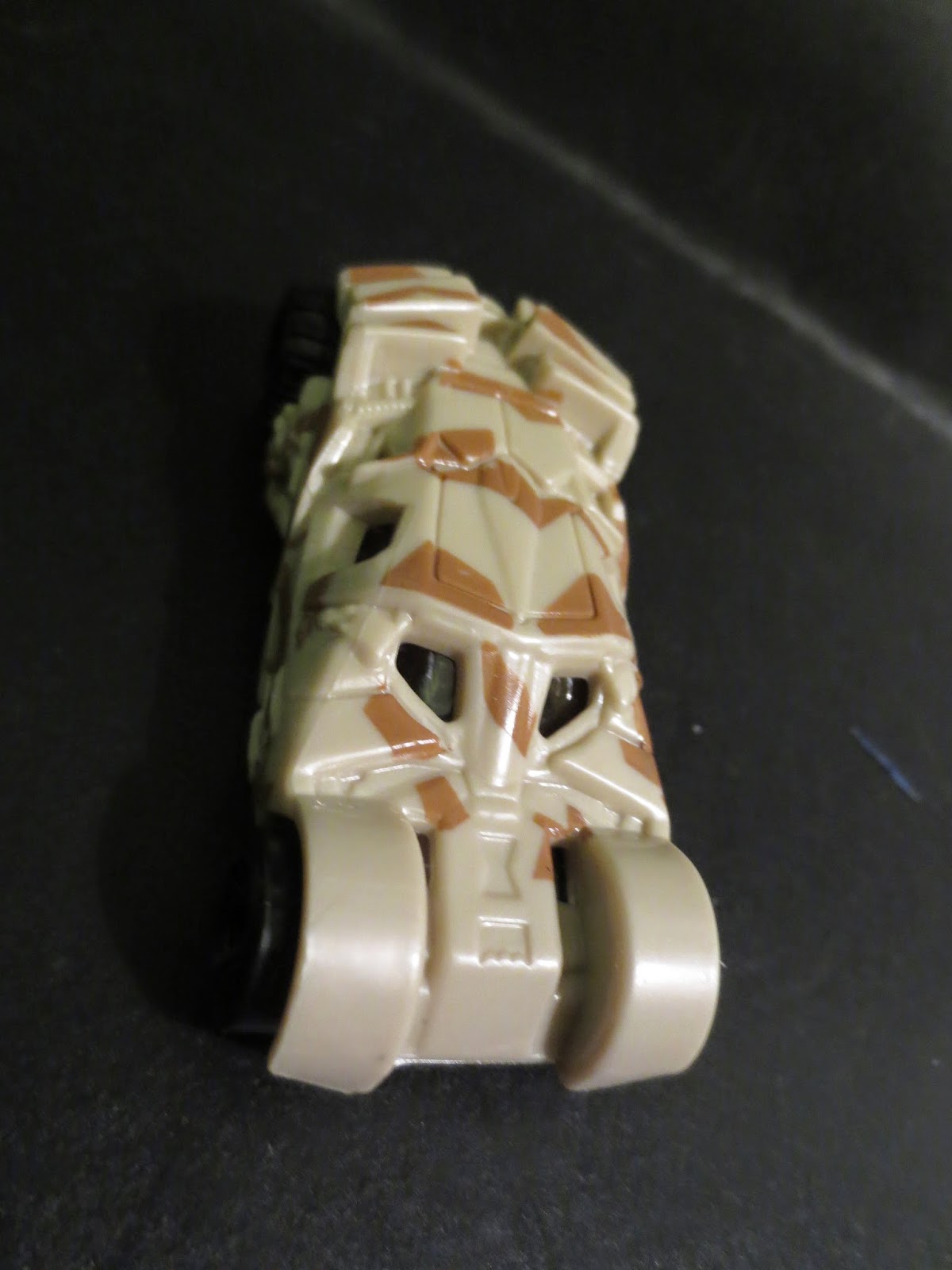 I haven't really reviewed any other Hot Wheels, but I have looked at the Riddler Chase Lego set which came with a Batmobile. Both Big Bad Toy Store and Entertainment Earth have a large stock of various Batman Tumblers in stock, so check them out if you're looking for something a bit more substantial!