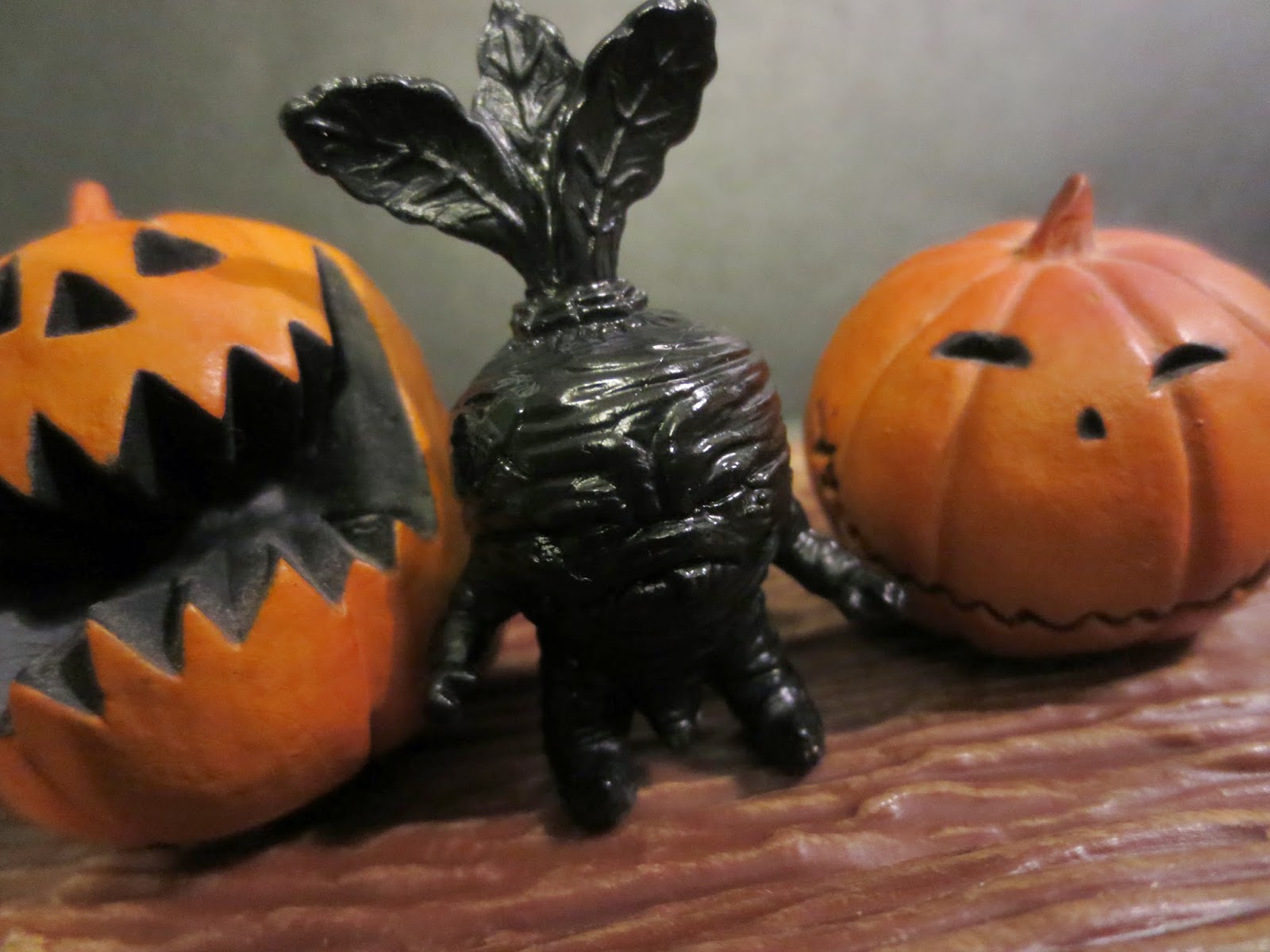 Designed by Scott Tolleson and sculpted by George Gaspar, Midnight Baby Deadbeet is a nasty little taproot that will fit in well with pretty much any other mini figure line that you collect.  Standing 1.5 inches tall, Midnight Baby Deadbeet is a an inky black variant of the original Baby Deadbeet which was one of my favorite toys of last year! He's a solid PVC figure and while he's a bit shorter than some other minifigures, he's got the attitude to make up for it! Read on to learn more after the break... 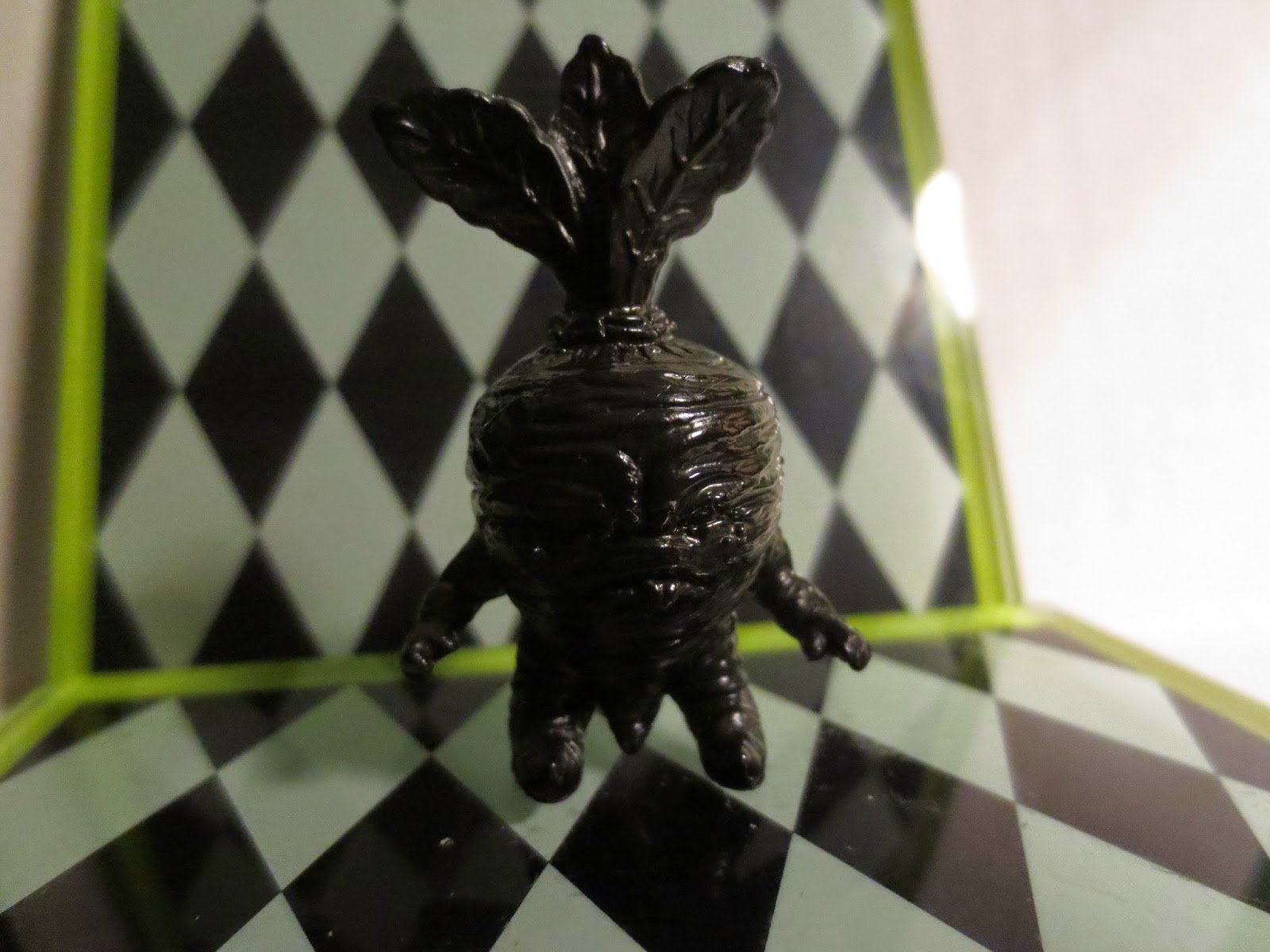 The first thing that strikes you about this guy is his how dark he is; the solid black plastic actually makes this guy look a little creepy. It is much tougher to see all of the details on this guy due to the black plastic, but they're all still they're if you look at him closely. Of course, his body looks like your standard beet and he's covered with the various wrinkles and indentations that you would expect to find on your garden variety vegetable.  He has three leafy stems growing out of the top of his head which makes up about 1/3 of his height.  Oh, and he also has arms and legs so that he can get around which match the texture of the rest of his beety body. Seriously, I really had a tough time photographing this guy. Just know the detail is there!

While this might look like the kind of vegetable you'd expect to see Mario pull out of the ground and throw at his enemies, Baby Deadbeet isn't just a regular beet! He's expressive and really has a nasty little look on his face that make him a lovingly awkward and adorable character: his eyes are quite small and narrow while the folds on his forehead even come together to give him a furrowed brow.  He doesn't have a nose but he does have a frowning mouth.  His tongue is comically hanging out in a very sour manner. Does that mean he is a pickled beet?  (*Groan*-Editor.)  Take a look above his brow, also. He's even got a little bandage up there holding together what looks like a tear in his...head? body?  I'm not really sure what to call it, but it is a neat little feature.

I believe this guy first was released in October of 2013, but he's been available once or twice since then as I just got him last month. Currently at October Toys' store you can get the basic flesh Baby Deadbeet and the Glow in the Dark Baby Deadbeet for only $2 each. That's a steal if you ask me! 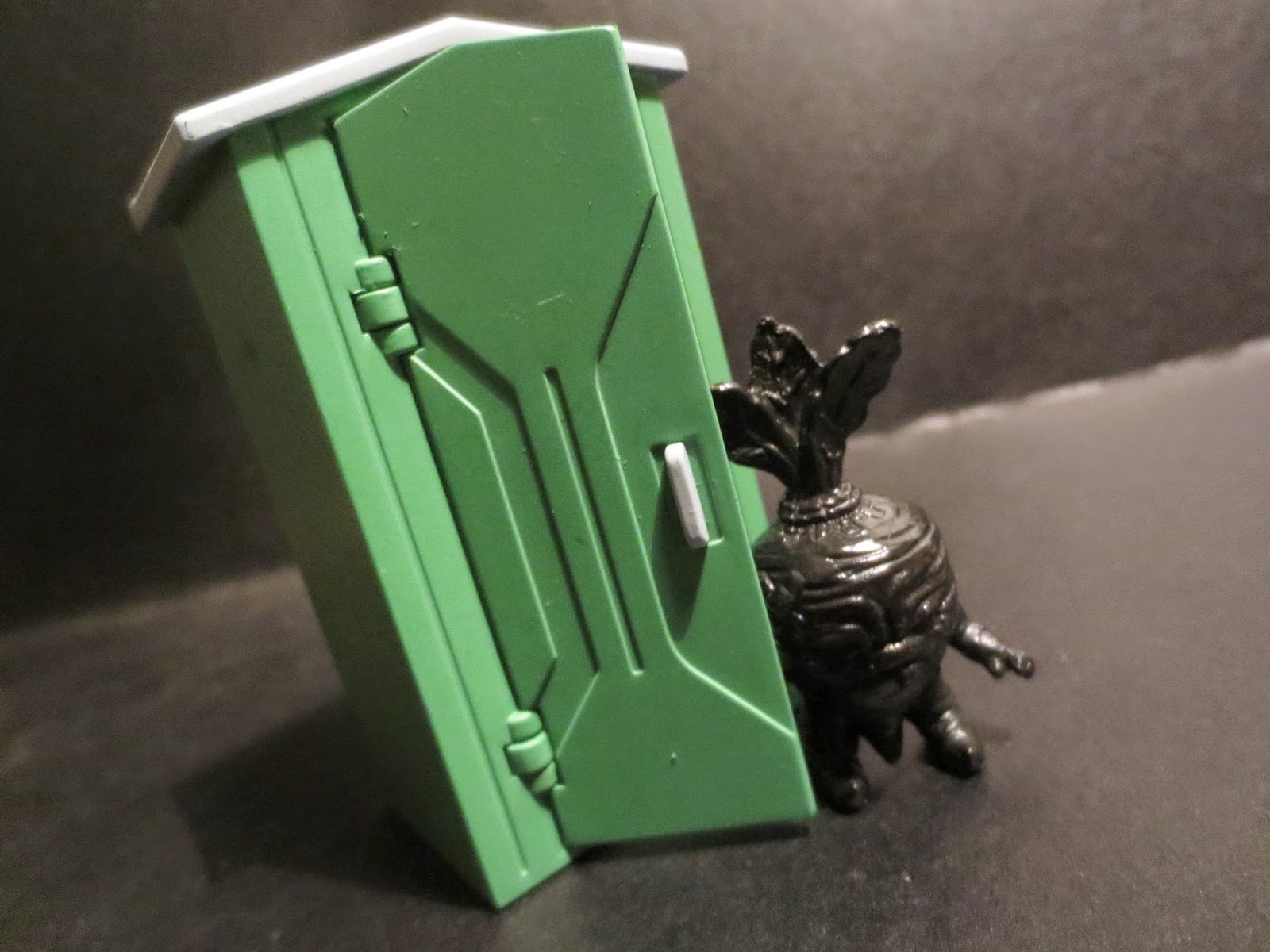 I definitely like this guy, but not as much as the basic Baby Deadbeet. The darker plastic is cool, but it also makes some of the crisp detailes harder to notice. If you've got another Baby Deadbeet already, you'll find yourself wanting more and more (as is the case with most minifigures) but if you don't, make sure to get a lighter one first so you can appreciate the excellent sculpt and design. Overall, I'm giving this baby a Good and a 1/2. That's still not bad at all, even for this little bugger.


Also, check out our other October Toys reviews here at ThEpic Review: