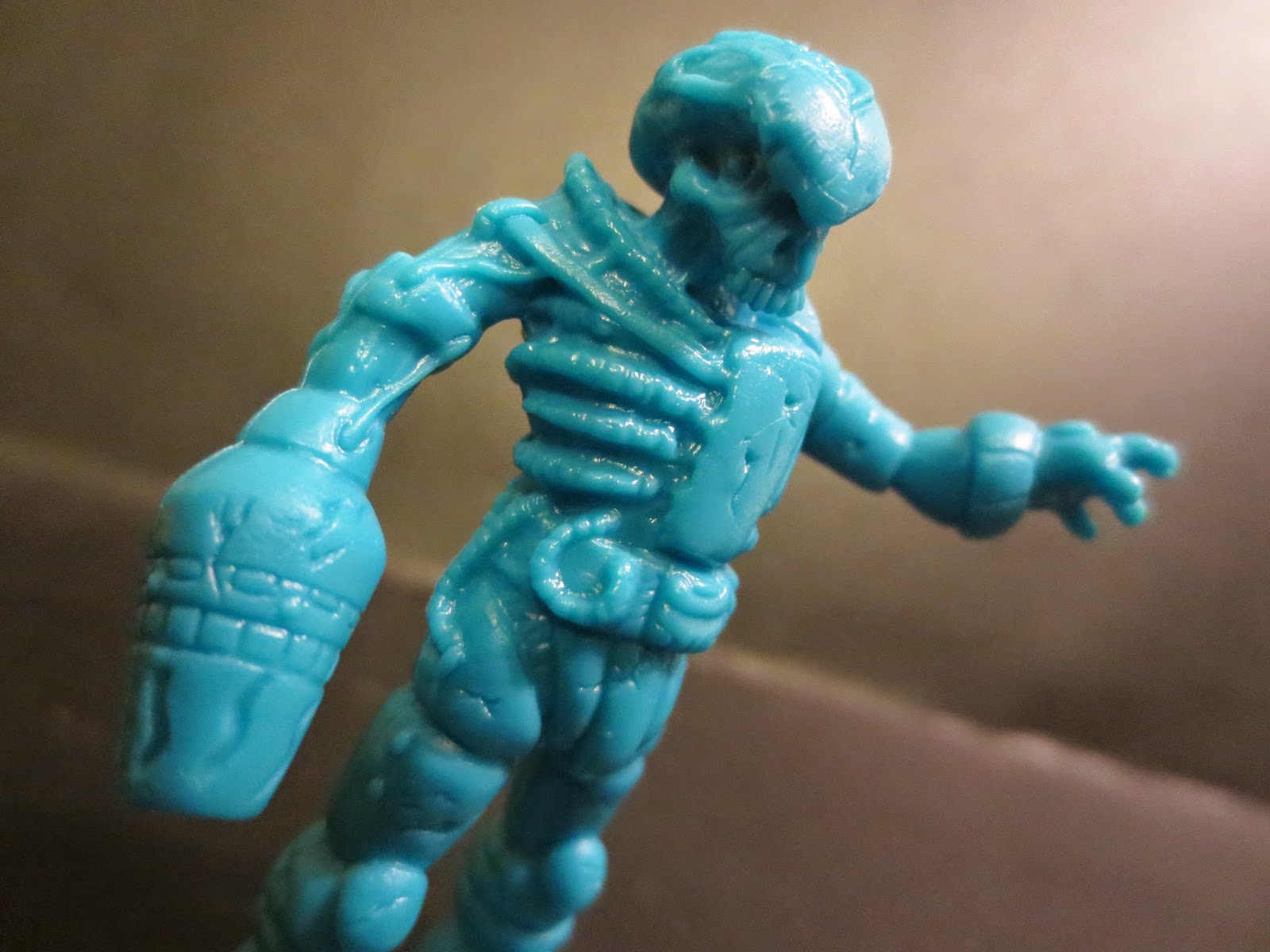 Based on a design by Matt Doughty/ L'amour Supreme and sculpted by George Gaspar, Pheyden is a neat little mini that should fit in with multiple other minifigure in your collections He's actually around 2 1/4 inches tall which makes him a little taller than the average minifigure from lines like OMFG, M.U.S.C.L.E., MWOTR, S.U.C.K.L.E., and Monster in My Pocket, but his design works as a taller, alien like creature. He also fits in great with SLUG Zombies. Remember, this is a solid PVC figure with no articulation. This is the special "Winter Blues" version of the figure, so he's cast in a nice bright blue plastic. I actually find him to be rather cheerful. More on his cheerfulness after the break!...


Why is he awesome?

Here's an image of the standard Pheyden from Onell Design's Glyos so you can see how Pheyden compares to this zombified version. The standard version of the character has an almost insect-like appearance to him, particularly due to his segmented armor, so the way Zombie Pheyden features some of those armored plates removed really helps to give the figure a creepy, deteriorating vibe. The right side of his chest has some very cool visible alien musculature while the various armored panels on his legs, arms, and chest are covered with various scrapes and dings. Check out that head sculpt, too. The torn...flesh or whatever on his head is exposed to reveal his...brain? Seriously, I'm not an expert on alien physiology and biology, but I'm liking what I see.Especially his teeth, sunken eyes, and nostril slits.

Zombie Pheyden also has a really cool pose. It's basic enough that he's not going to be hard to stand up, but his outstretched left hand is cool and a nod to the traditional zombie "grab." He's also got an unusual weapon on his right hand that appears to be a weapon of some kind. Maybe a blaster arm or something?

This version of Zombie Pheyden was available in January of 2014 through October Toys' online store. He's sold out now, so you'll have to find someone to trade him to you. October Toys has a few other versions of Pheyden up for sale currently, though.

I'm giving Winter Blues Zombie Pheyden a Great. I kind of wish he was a bit shorter to fit in better with other minifigure lines, but then again he might intentionally be taller than those guys. He's fun, durable, colorful, and only cost me $2. I like him!

Also, check out our other October Toys reviews here at ThEpic Review: