Action Figure Review: Scorpia from Masters of the Universe Classics by Mattel 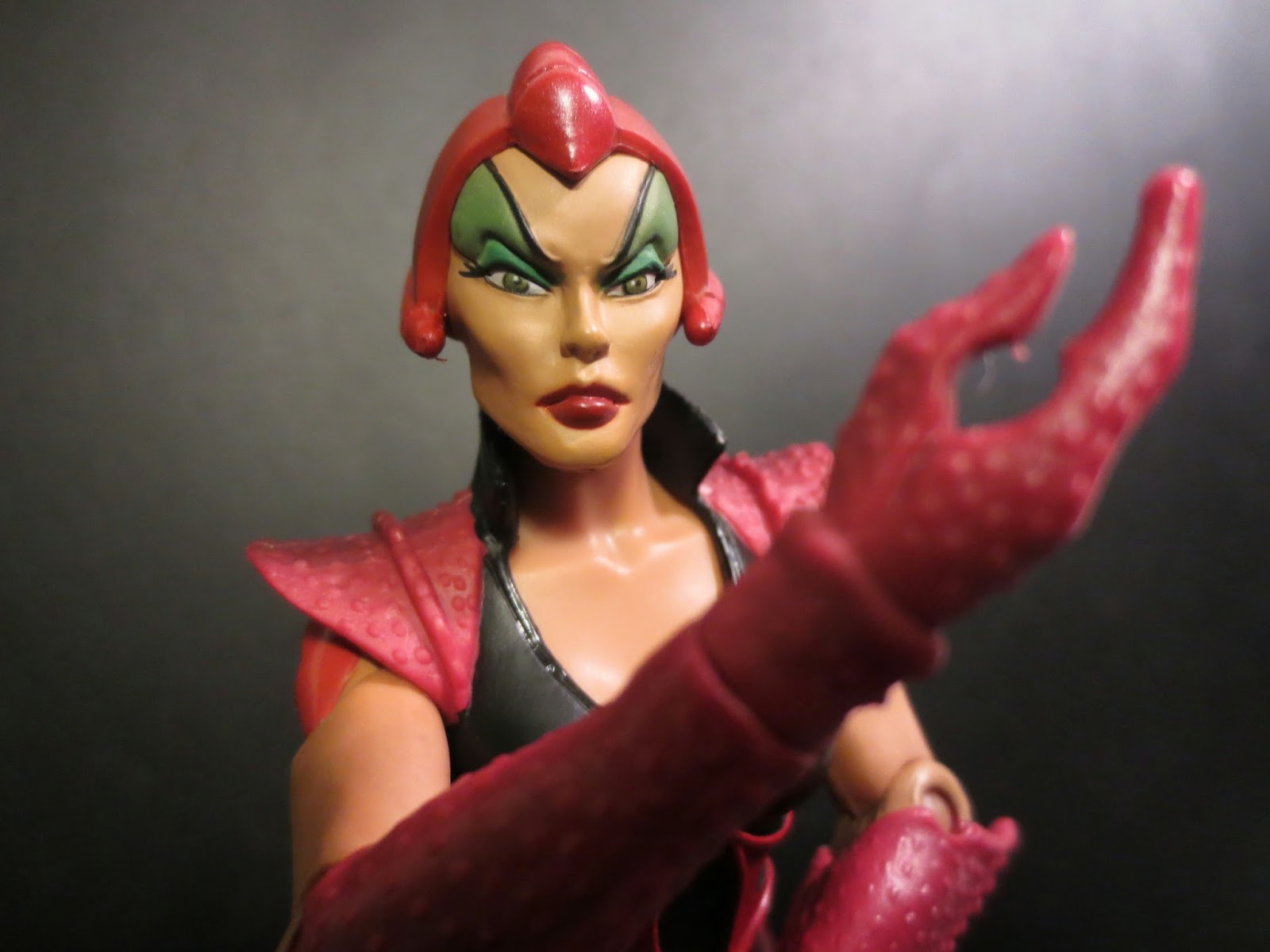 Ready for another Masters of the Universe character from Filmation's She-Ra: Princess of Power animated series that neither made it into the vintage MOTU nor Princess of Power toylines? Then look no further because Scorpia is here! Half woman, half scorpion, Scorpia was know for her menacing demeanor, her multiple appearances in the cartoon and the film Secret of the Sword, and her unusual voice. As a member of the Horde, you know this girl is always up to no good! As the monthly figure for the 2014 Club Eternia subscription, Scorpia increases the numbers of both your Horde faction and your collection of scorpion women collectibles (surely their was a Scorpina toy made at some point, right?). Ready for a look at Scorpia? Then join me after the break! 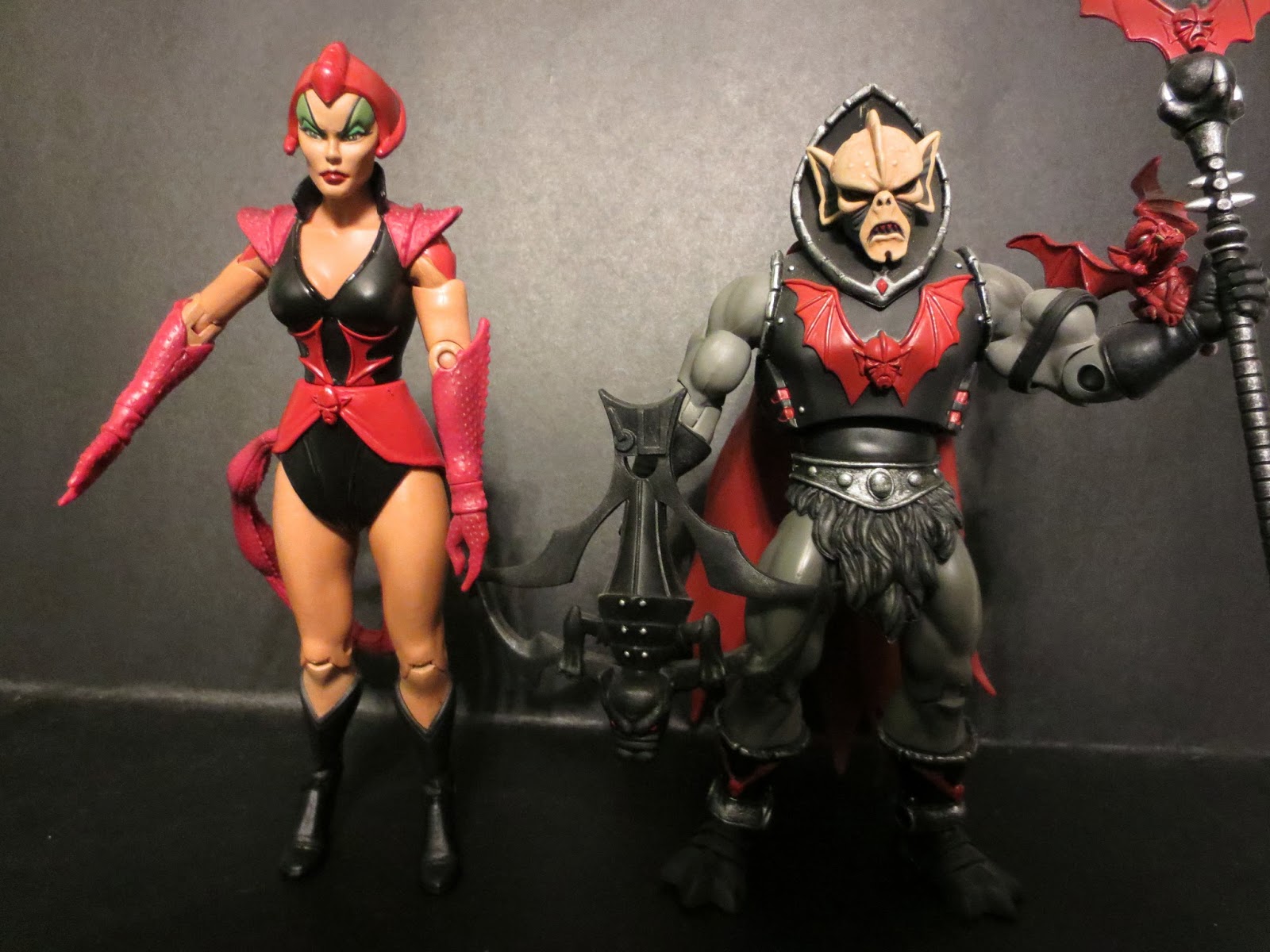 Due to her high heeled boots and the spines running across her helmet, Scorpia actually stands right around 7 inches tall. While she is inspired by her appearance on the Filmation cartoon series, she definitely has the more realistic look that reflects the so called "Classics" style. She looks great with her Horde allies, the POP characters, or even the Evil Warriors if you're not a Princess of Power fan. Who wouldn't want a scorpion woman fighting alongside Clawful and Webstor? While most MOTUC figures rely on reuse, Scorpia actually feels like a fairly unique figure. While the basic body elements like the torso, thighs, and upper arms are reused, everything else is quite new. We're certainly getting a lot of new tooling this year! 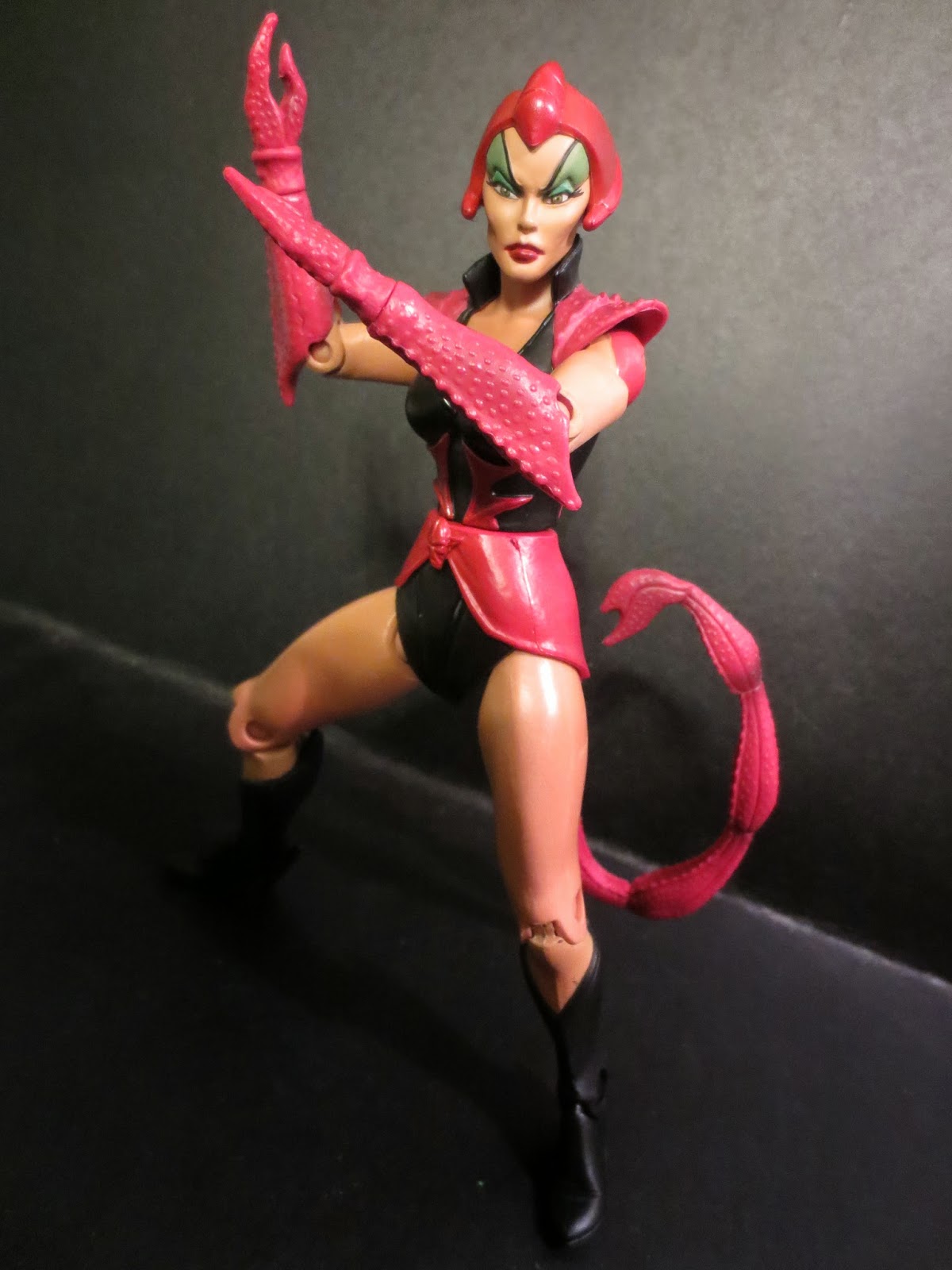 Like most Masters of the Universe Classics figures, Scorpia has some great, solid articulation that makes her both a fun and durable figure to fiddle around with on your desk. She does have a few differences, however, that change things up a bit. She features: hinged ankles, hinged knees, swivel thighs, swivel/ hinge hips, a swivel waist, swivel/ hinge shoulders, swivel biceps, hinged elbows, swivel wrists, a ball jointed head, and a swiveling tail. While she's missing the fairly standard swivel joint at her boot and the rocker ankles that many of the female figures have, the tail swivel is a nice little addition. There isn't much you can really do with the tail (a vertical hinge at the base would have been awesome) but it's still nice to have some movement on it. The rest of the articulation is great, particularly the ball jointed neck; it is extremely flexible, allowing for a wide variety of expressive poses. Scorpia is a great figure to pick up and play with pose as part of a display. 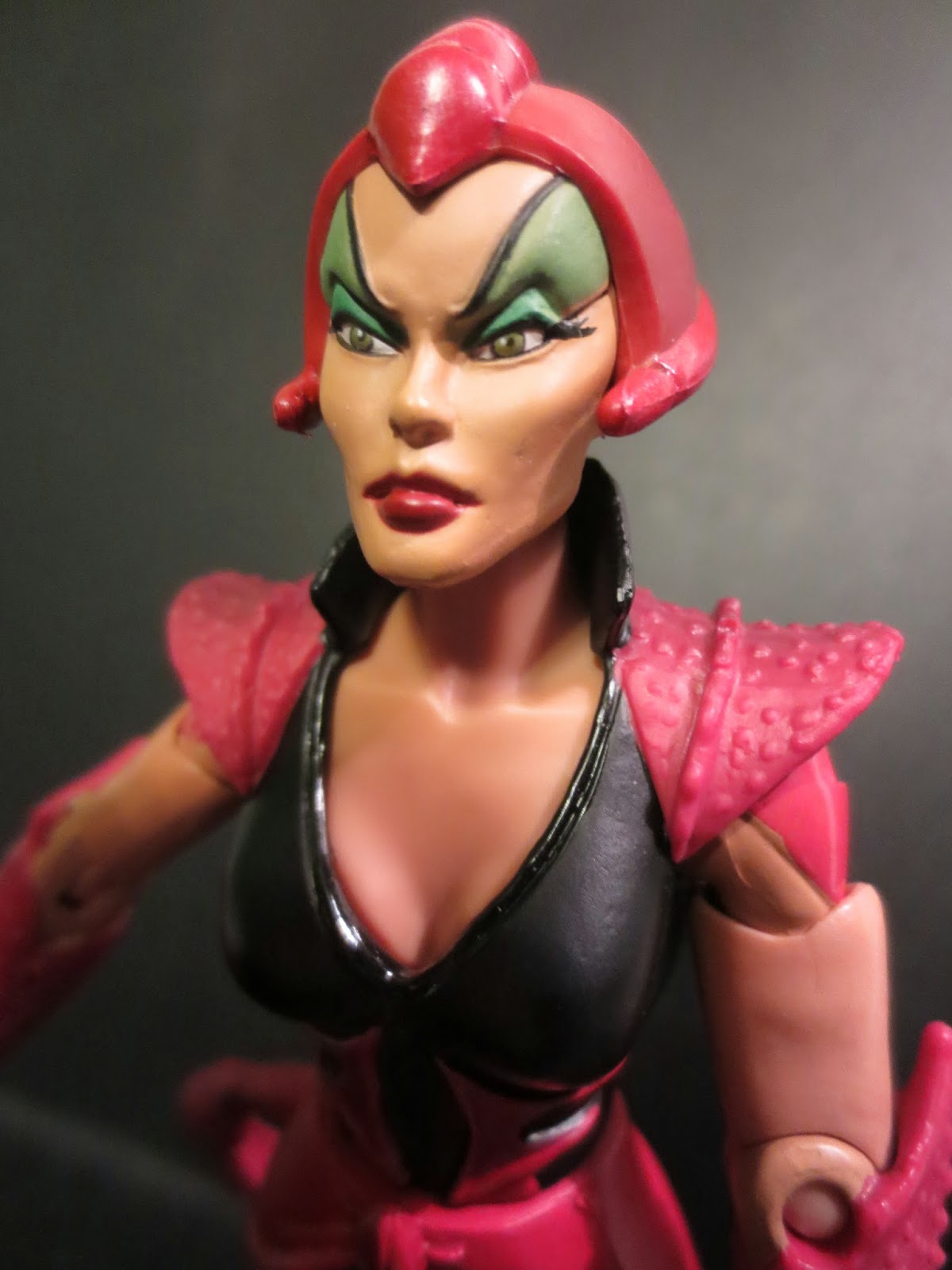 As I mentioned earlier, if there's any reuse in Scorpia's sculpt other than the standard thighs, torso, and biceps, I'm not seeing it. Scorpia has plenty of new sculpting and parts that makes her feel fresh and unique amongst the other ladies in MOTUC. First and foremost, we have to talk about the headsculpt; it's gorgeous. It's always tough to divorce Scorpia's crazy voice in the cartoon from her appearance, but when you do and just look at this figure you'll realize that Scorpia has one of those faces that can either be terrifying or beautiful. Think of someone like Angela Jolie and how different she can look when she's playing someone evil like Maleficent. Scorpia has those very severe cheek bones and some amazing, piercing eyes. I've never liked the helmet design on the cartoon model, but I think it looks quite a bit better here although I think some hair coming out from beneath it would have looked better. 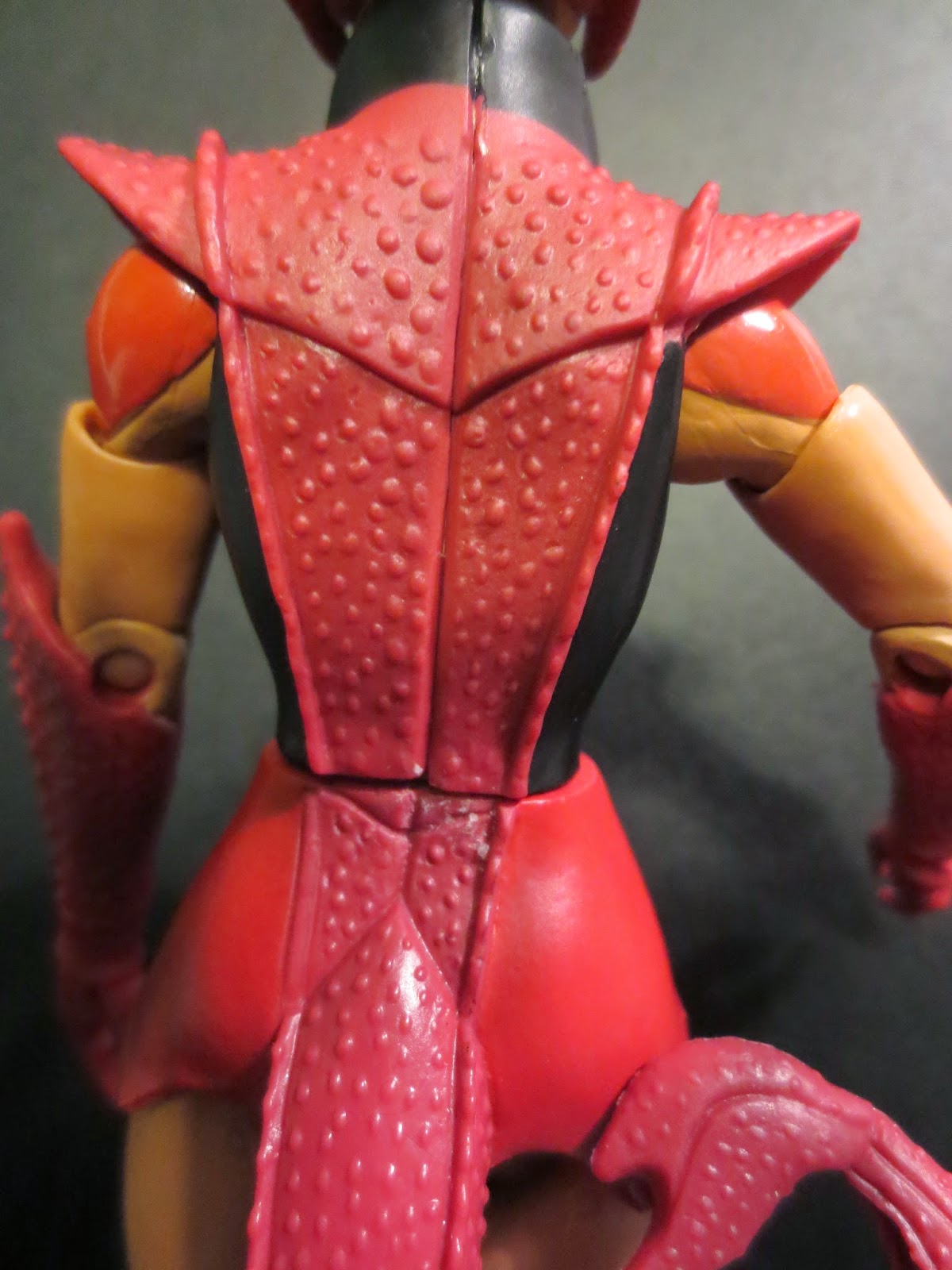 The limbs and tail are also incredible. Rather than go with a flat, animated look, the Four Horsemen chose to give Scorpia's scorpion bits a rough, chitin like texture. I really love the texture and slightly rubbery feel of the tail. I'm also digging how the claws are fairly small and numble looking. It really heightens the sleekness of the sculpt versus making Scorpia just your average monstrosity. The back of my figure oddly had a bit of excess glue on it, but most of it scraped off with a small tool so it didn't cause too many problems. I haven't heard many complaints about the crotch of Scorpia's unitard, so that either means that fans think it looks better than Glimmer's (I would agree) or that they've realized Mattel just won't ever get this detail right. I think it looks more like a unitard bottom than a skirt, so that seems to be some improvement. 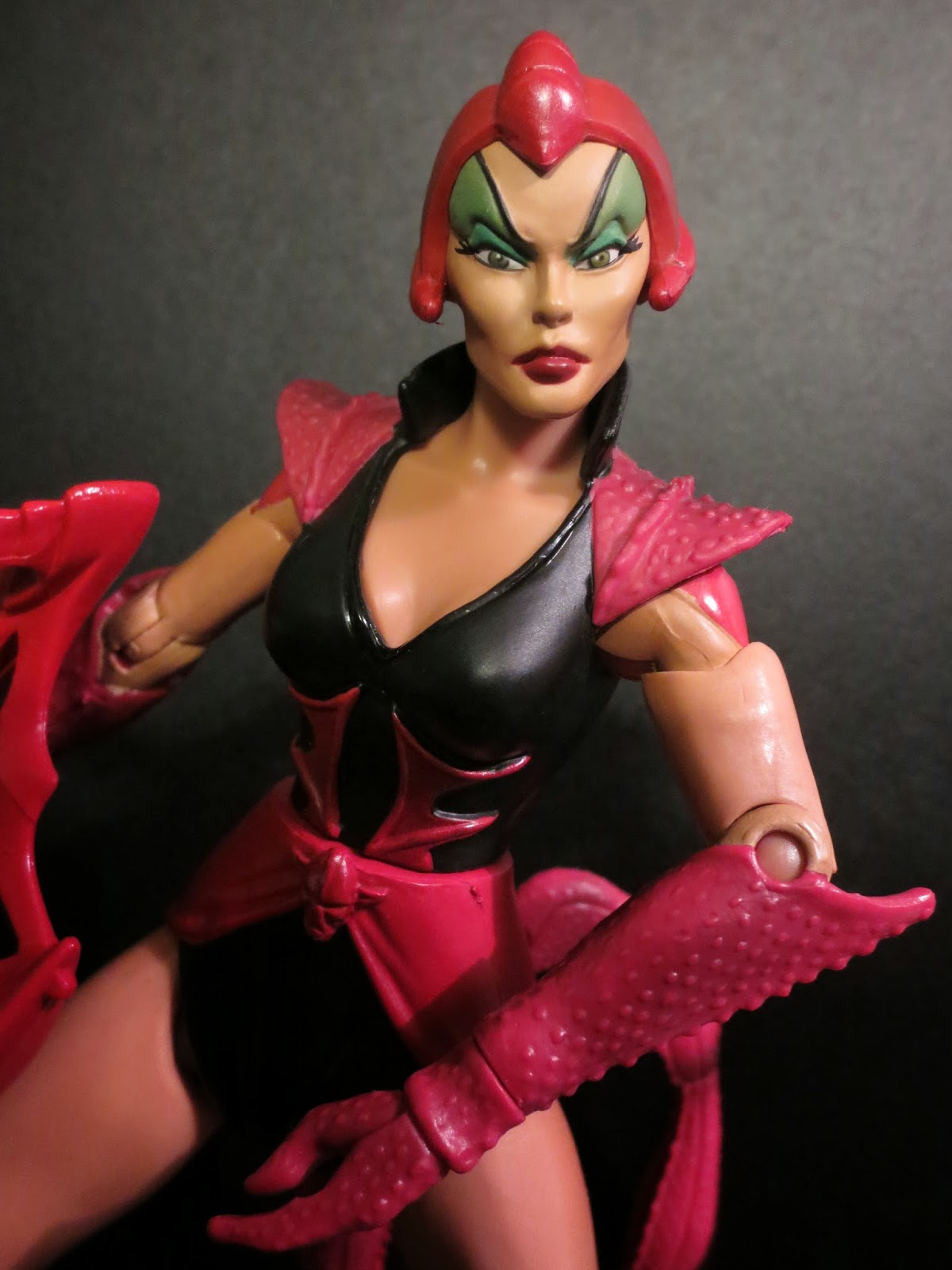 In addition to upping the level of detail on Scorpia, Mattel also made sure to giver her a more nuanced paint job. Rather than simply relying on the Filmation color palette as they have on some figures, Mattel opted to go with darker reds with some excellent shading to really make Scorpia work as a modern action figure in the "Classics style" that most figures in the line adhere too. For her outfit, a fairly simple high collared unitard and boots, Mattel opted for black with red highlights. While her helmet and skirt are a deep red with some dark shading, the Horde logo on her unitard has some metallic highlights to make the little Hordak/Horde Prime face stand out. For the more organic scorpion parts of her arms and tail, a lighter red is used with some more shading. It really looks quite good and nicely differentiates Scorpia's scorpion body elements from her outfit. Since is supposed to be from a desert kingdom, Scorpia's skin has a darker tone to it that looks fantastic and really goes well with her face. She has one of the best female face sculpts in the line; it's very severe with a hint of beauty to it. The eyes and eye makeup are extraordinary here and really enhance the idea of Scorpia as a desert warrior queen. There are a few places that are a bit messy such as the shoulders and the border between her shins and boots, but everything else looks excellent. 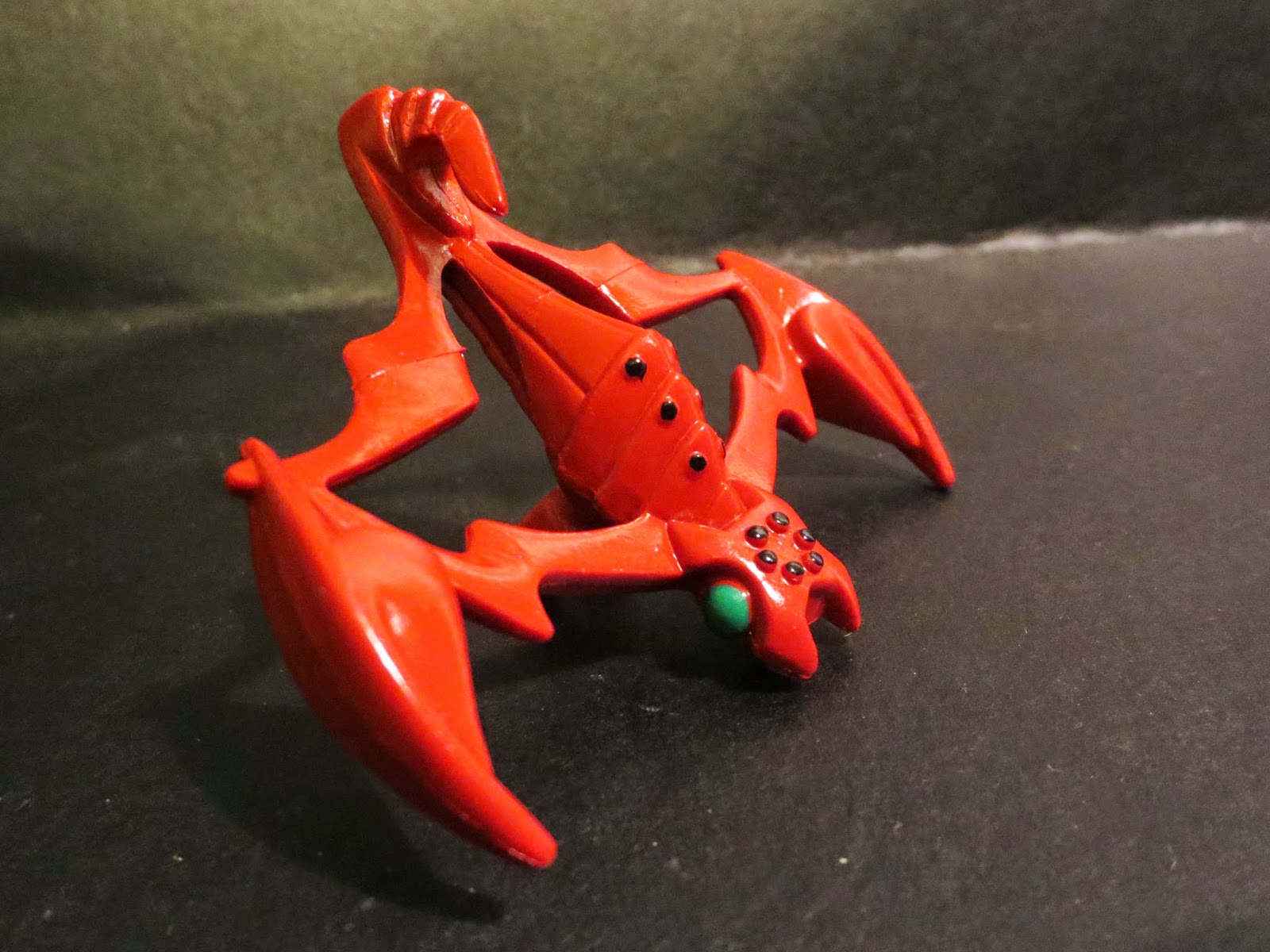 I'm a little disappointed that Scorpia only comes with one accessory, but it is a fairly good one: A scorpion themed crossbow. Since the vintage MOTU Horde figures came with crossbows, the Four Horsemen continued this tradition of crossbow wielding on to female Horde Octavia and Scorpia and even the spy Double Trouble/Mischief. Scorpia's crossbow looks like a stylized scorpion and features a very glossy red body with black and green details (I really dig the emerald eyes). Since Scorpia has claws rather than hands, the crossbow has a clip rather than a handle so it can attach to her wrist. This can be put into her claws if you choose, although it does stretch out her pincers a bit. The crossbow is molded in a plastic that's a little rubbery on the tips and tends to come out of the package a bit warped on the claws and tail. Mine seems to be improving over time, so hopefully it'll form itself back in shape as the days go by. 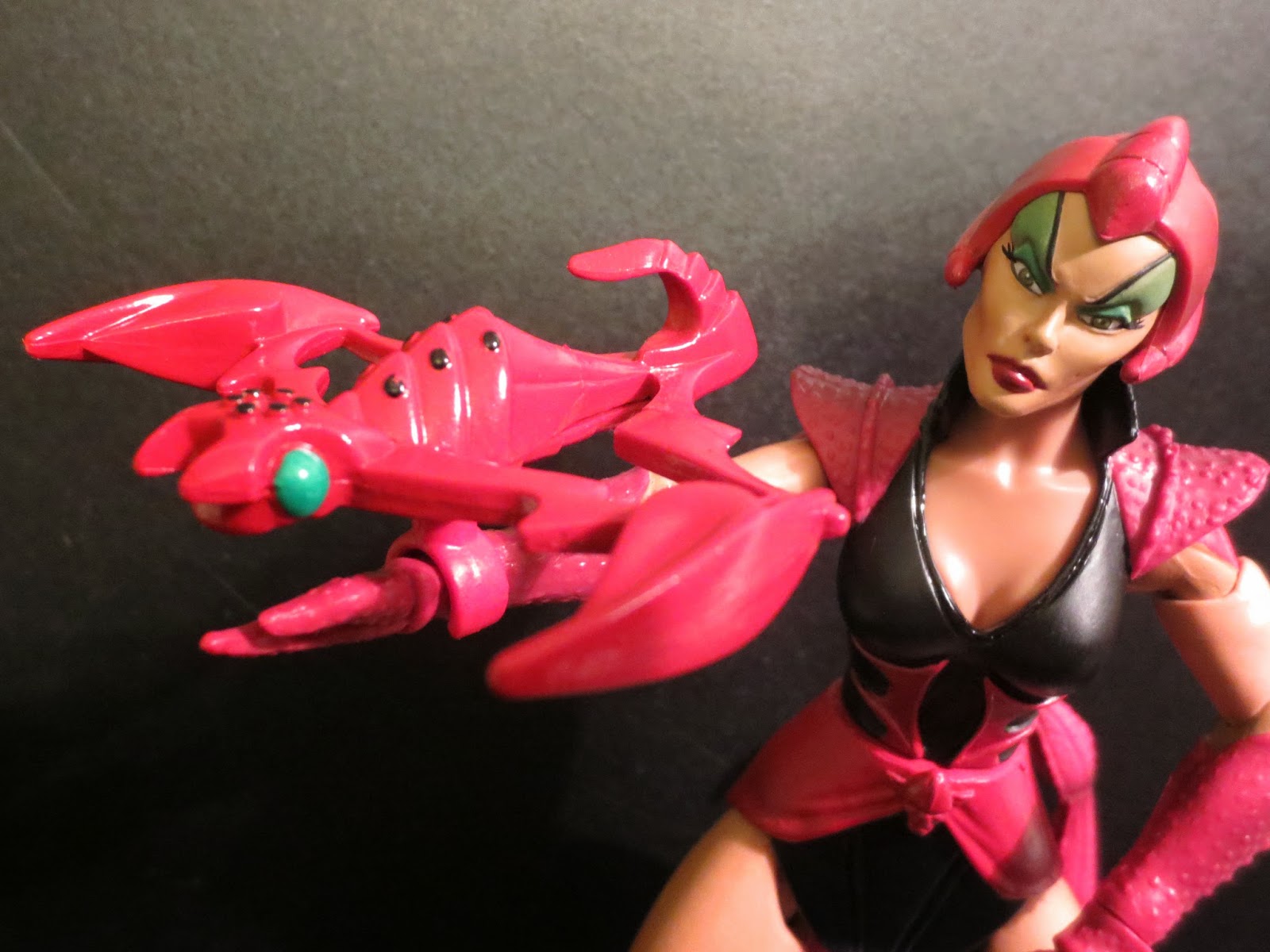 While I consider myself a pretty big PoP fan, I've never been all too keen on Scorpia. On the cartoon she always came across as rather silly to me, probably due to that bizarre voice that Linda Gary chose for her. This MOTUC figure, however, has definitely won me over. It's fantastic! Excellent sculpting, paint, articulation, and a great accessory all work together to produce one of the year's best releases so far! I do wish that she had another accessory, as weren't all figures supposed to come with at least two accessories post Stratos? I don't count a nonremovable tail as an accessory, so something extra would have been welcomed, but that's the only blemish on an otherwise excellent figure. I'm giving Scorpia a Great and a 1/2 as she is a terrific example of what this line is truly capable of when everyone is working together. 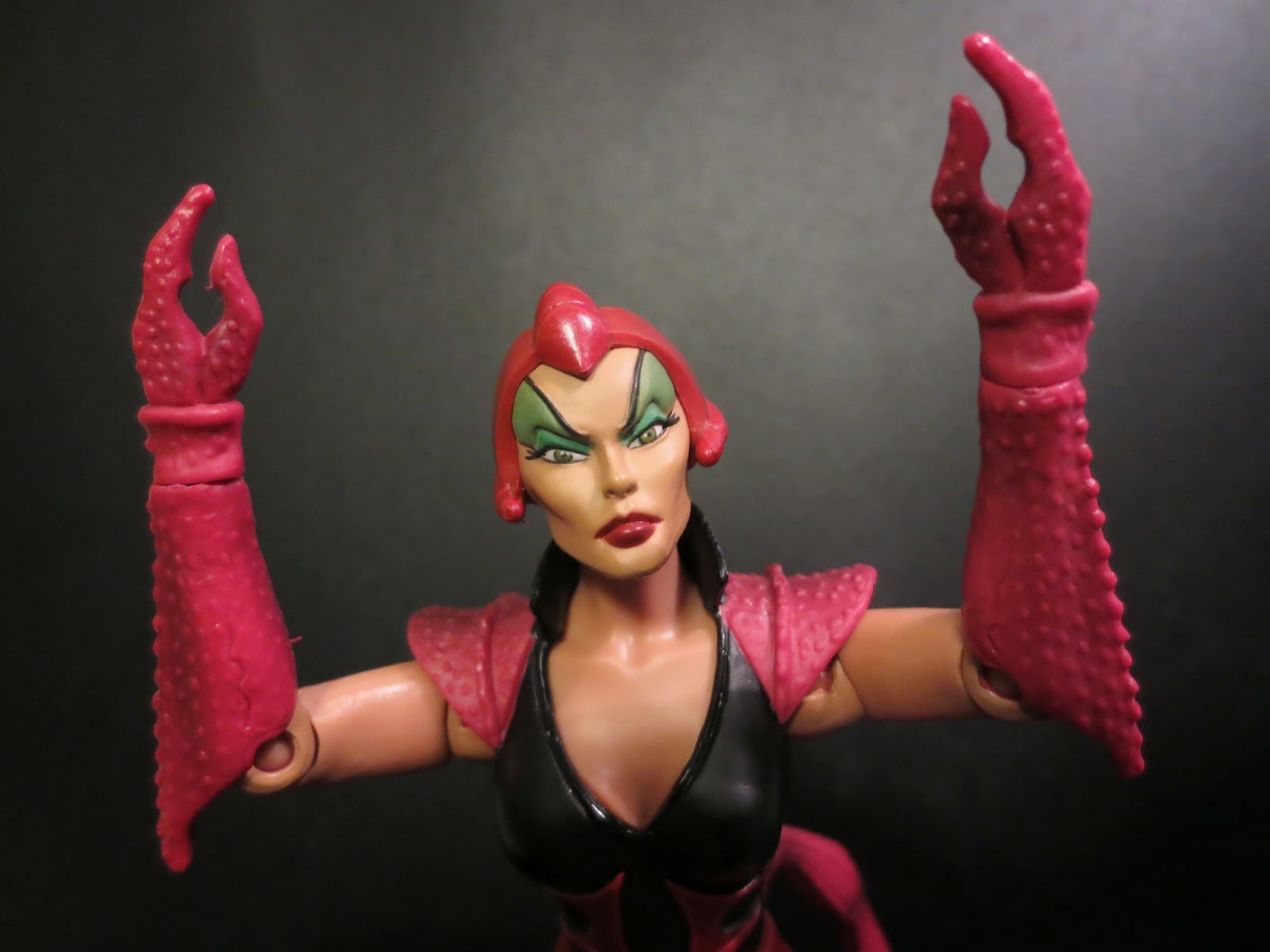