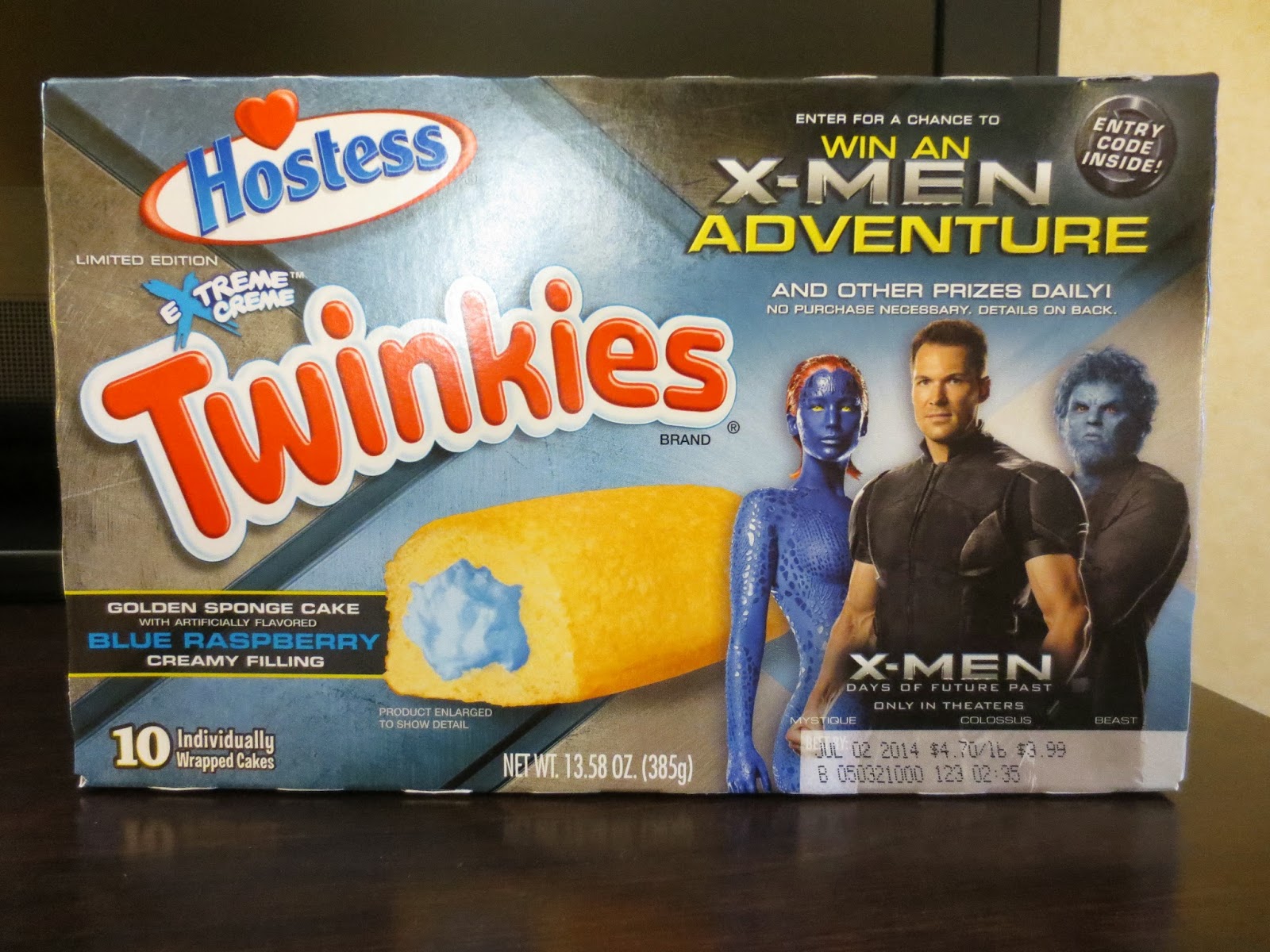 I've never really been that big of a fan of Twinkies. To me, the best thing about Twinkies is their appearance as a plot device in Zombieland and as a point of size reference in Ghostbusters. I don't dislike them, but I'm not incredibly fond of them either. I am, however, very partial to movie tie-ins  and blue food, so these X-Men: Days of Future Past branded Twinkies from Hostess basically had my number. These are movie tie-in blue raspberry flavored snake cakes with a picture of Jennifer Lawrence on the box (granted she's in her full Mystique makeup, but it's her). This honestly seems like the best marketing idea ever. Beast is on the box too, which is cool, but what the heck is with non-metal Colossus? Does anyone recognize this guy without metal skin? I didn't. Anyways, check out a full review of these Twinkies after the break... 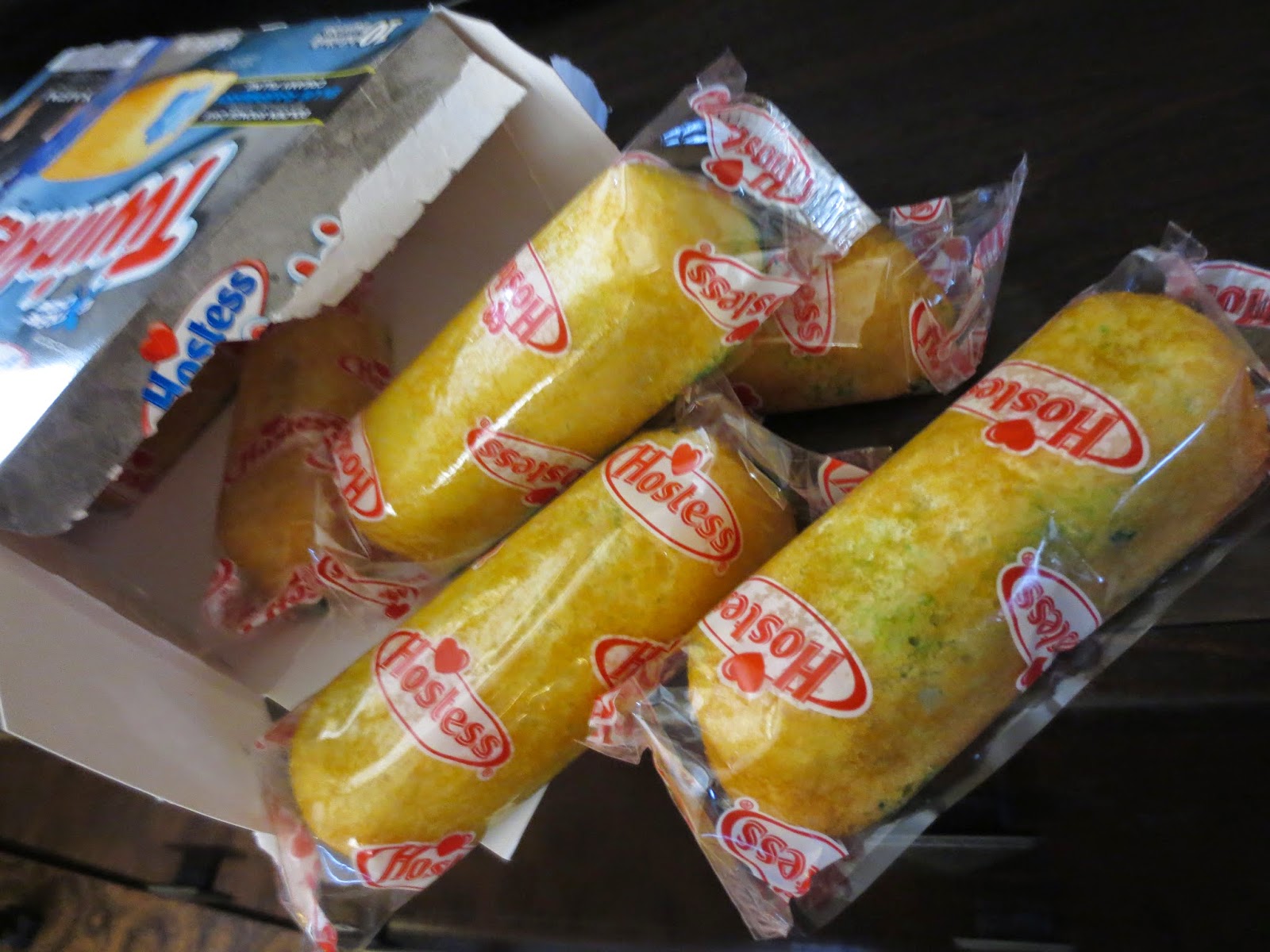 Inside the box you get ten individually wrapped Twinkies. As you can see, the blue filling is visible through the yellow sponge cake. Can you imagine buying a box of these and not knowing they were Blue Raspberry flavored? You'd probably think these things were moldy as all get-out. They aren't, however. They're just fine. It might seem weird that X-Men branded Twinkies exist, but I'm 99% sure that there is a seen in Days of Future Past where Quicksilver is shown to have stolen dozens of boxes of Twinkies. Makes sense. 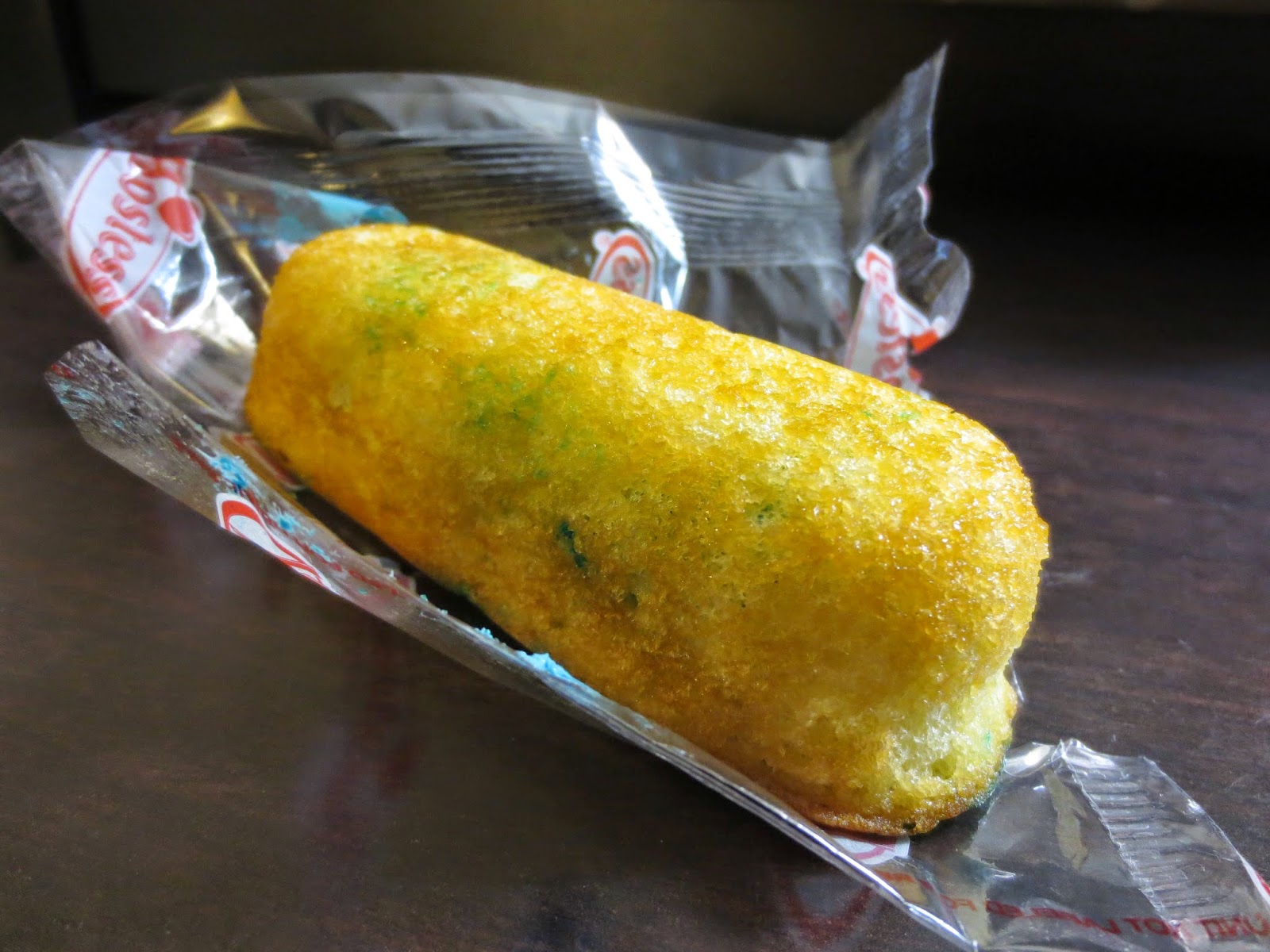 Here's what the Twinkie looks like out of the package. Each Twinkie is about 4 1/4 inches long. They are soft and spongy on the outside. I'm sure you've eaten a Twinkie or at least seen one before right? Well, get ready to have every preconceived notion of life, love, and the nature of the universe turned upside down.... 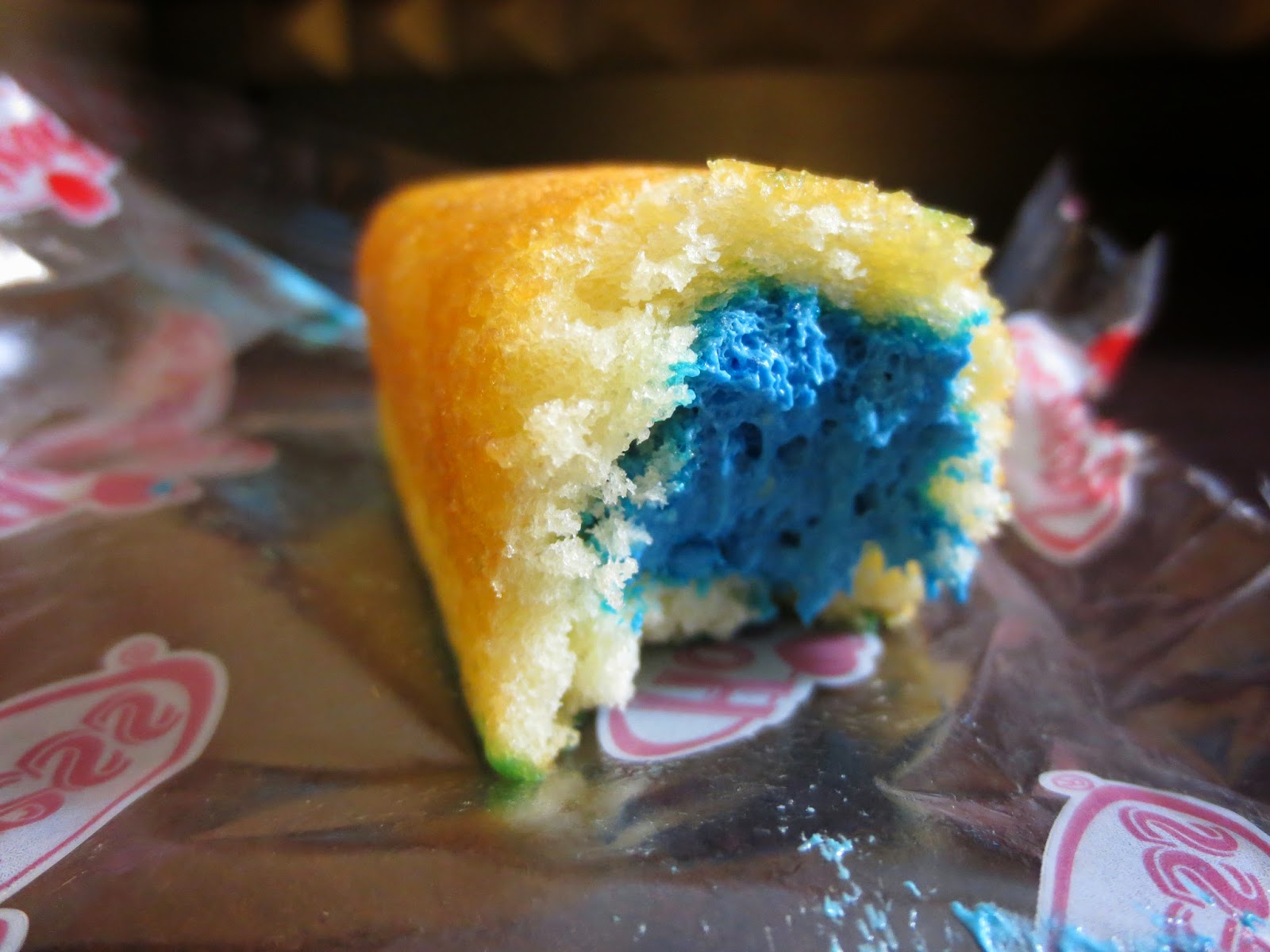 Bamf! Blue Twinkie! The flavor isn't an intense, sour Blue Raspberry, but a softer, more mellow blue flavored cream. It's not as sweet as your common Twinkie, and so I find this far more palatable. I was able to eat four of these in one sitting, FYI. I will say, though, that if you told me this was Cotton Candy or Smurf-berry flavored, I wouldn't doubt you. The flavor is pleasant, but it doesn't scream Blue Raspberry. And  I would know, because Blue Raspberry is my favorite made up fruit. I'm also a cryptopomologist in my spare time. 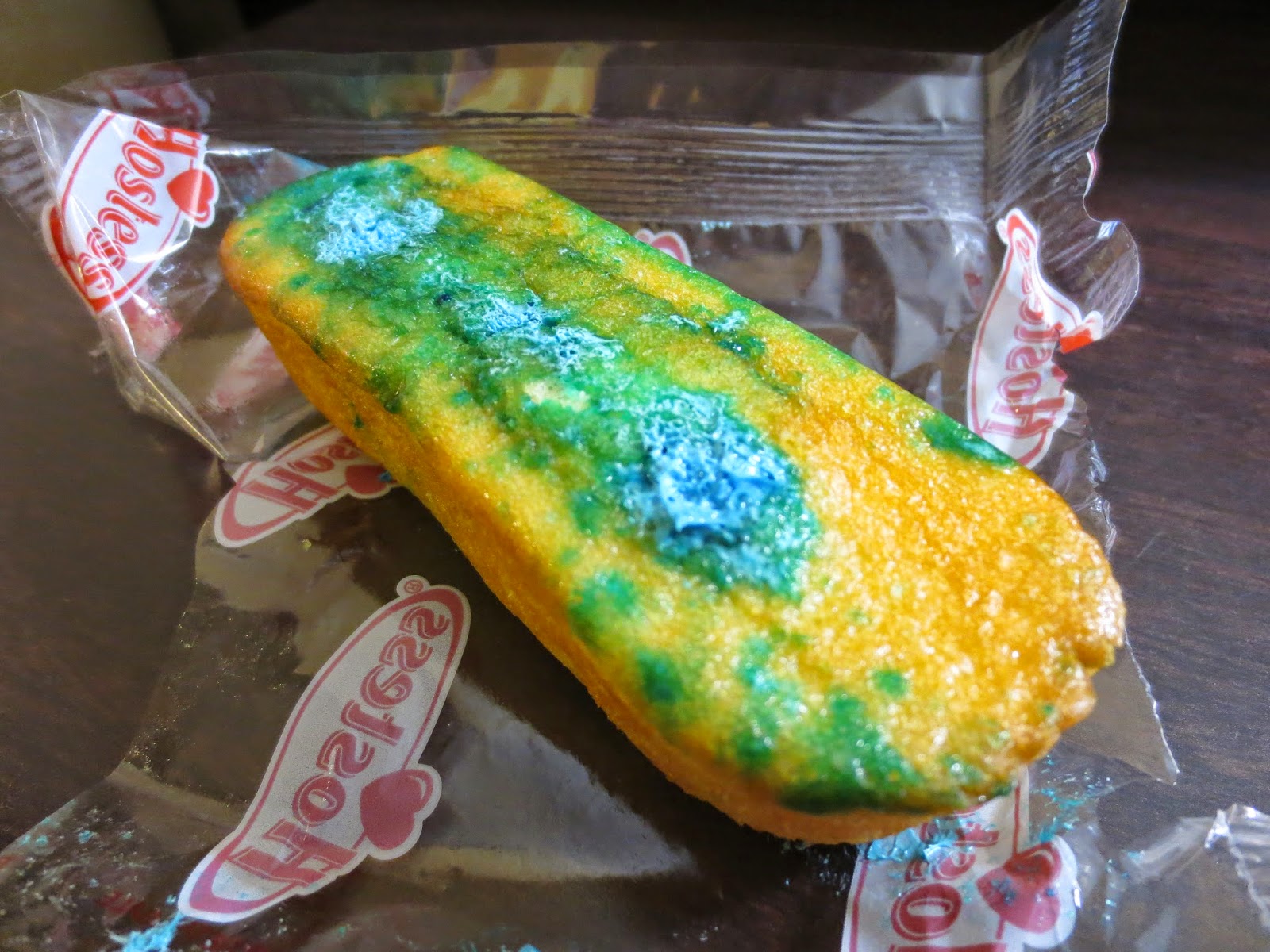 These aren't bad. I'd give them a Good overall. If you like Twinkies, you'll probably like these more. By the way, because I'm a generally awesome person and a righteous dude, I'm going to give Hostess some ideas for more Twinkie tie ins. And here they are:

2. Ghostbusters Twinkies- This could be just one very large Twinkie that is endorsed by Ernie Hudson. Maybe give it a slime green filling? Perhaps key lime?

3. Troll 2 Twinkies- These would essentially be regular Twinkies filled with green icing and covered with green icing, like those weird cakes the family almost eats in Troll 2. If you collect five box tops, you can send away for a free shirt that says, "You can't piss on hospitality! I won't allow it!"