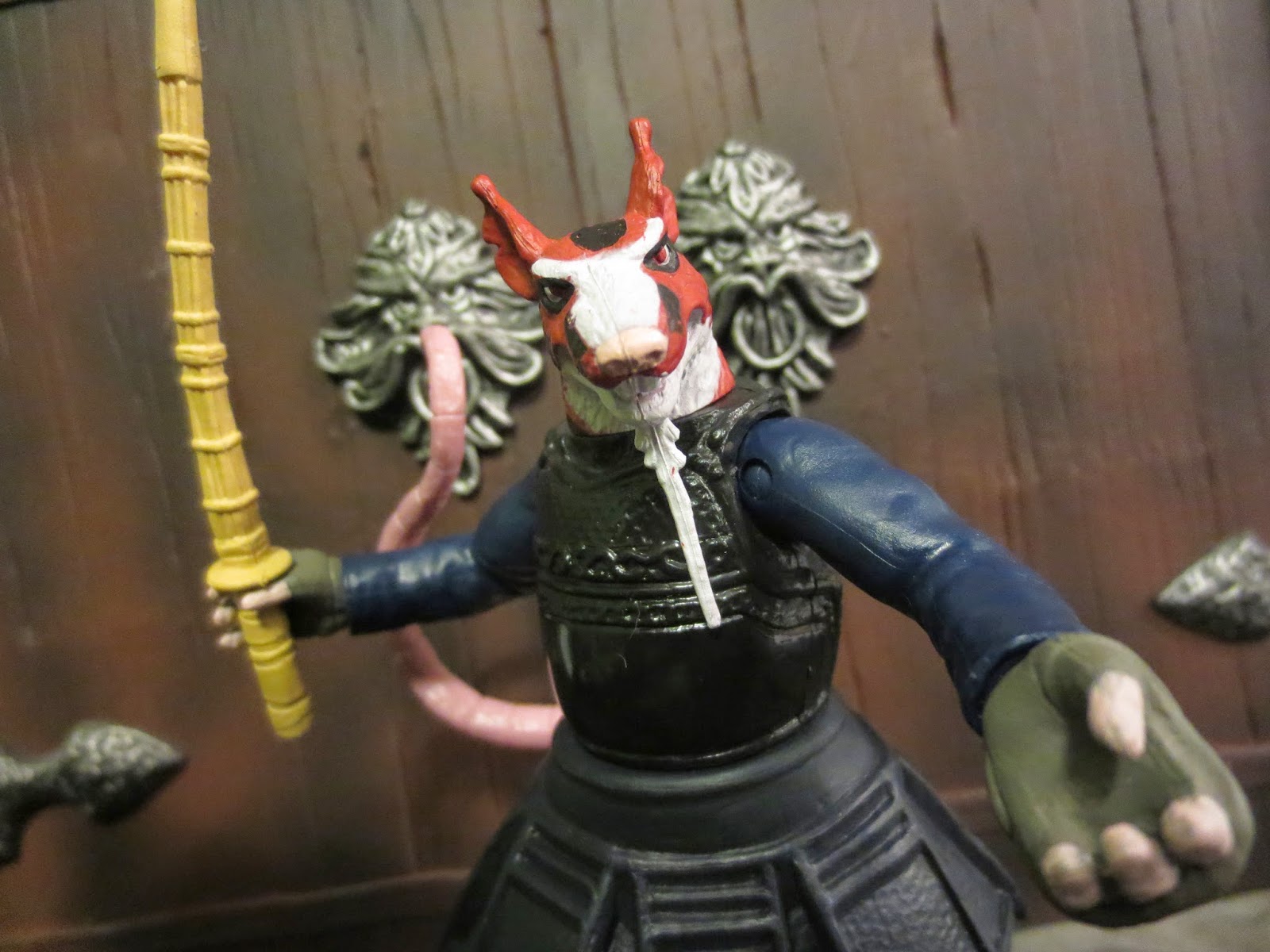 The Teenage Mutant Ninja Turtles themselves are amazingly enduring and fun characters that almost anyone can relate to, but for me it is Splinter who is the heart of TMNT. Whether your favorite TMNT canon depicts Splinter as Hamato Yoshi himself, his reincarnated spirit, or as Yoshi's pet rat, the character's duel roles as sensei and father to the turtles truly conveys those core values that are at the heart of what we love about the TMNT: Family. Honor. Learning. Growth. Love. In fact, Master Splinter might just be one of the greatest father figures that we see in any form of media. He has to truly balance preparing his sons for a world that fears them with such an unconditional love and acceptance of who they are and how they must rely on one another. One of my favorite stories involving Splinter comes from issue 21 of the IDW TMNT series. In it, the turtles are suddenly attacked by a masked assailant who pushes all of their boundaries. The assailant is far more skilled, switches his tactics repeatedly, taunts the brothers mercilessly, knows all of their secrets, and eventually threatens to kill their father. After a long, drawn out conflict where the turtles let the masked assailant know they would die before they allowed their father to be harmed, the assailant reveals himself to be none other than Splinter, testing his students and sons for the battle ahead. It's a fantastic issue and the concept of a more battle ready Splinter definitely came to my mind while reviewing today's figure, Dojo Splinter. Ready for a look at this guy? Then join me after the break... 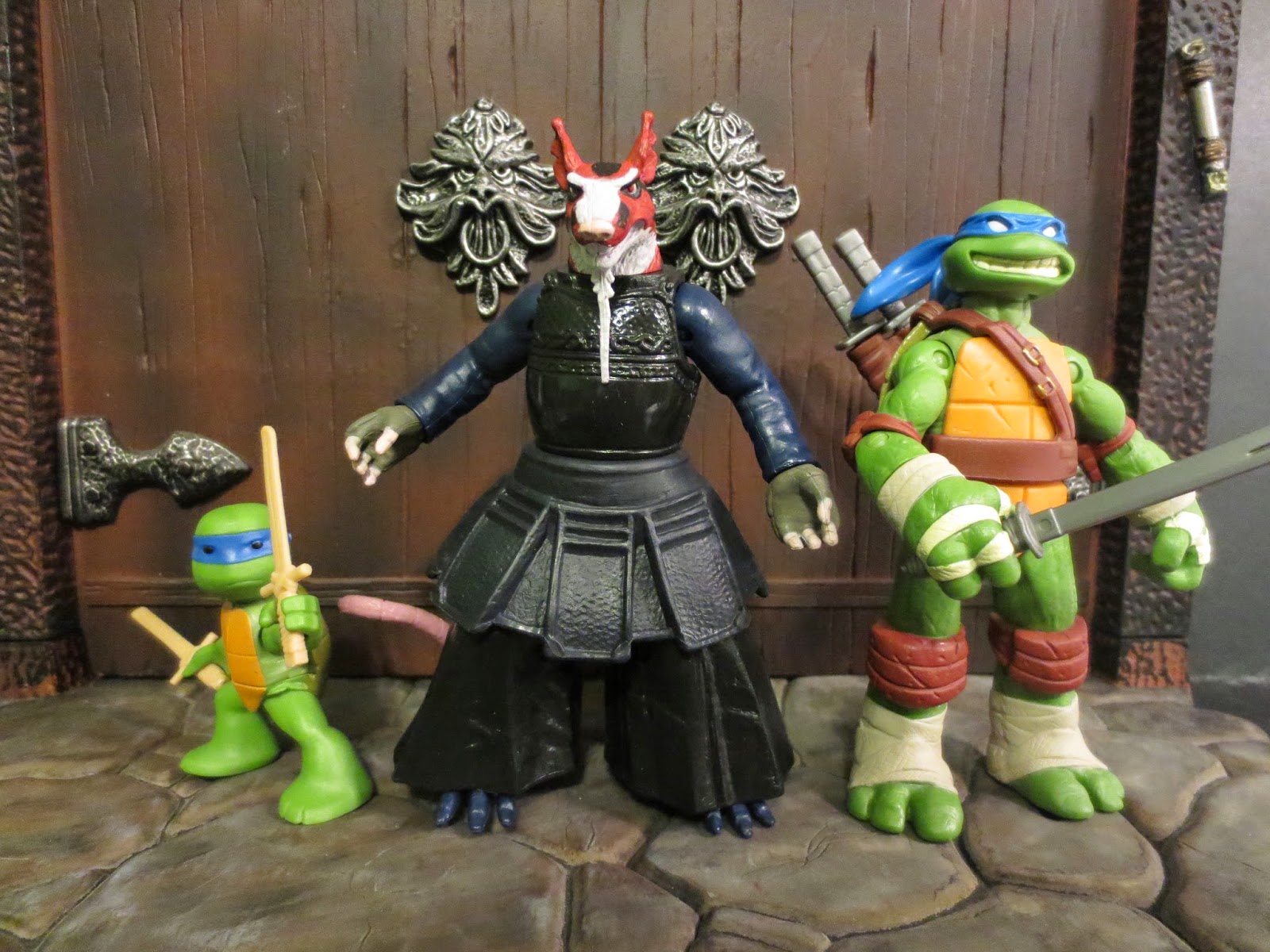 Splinter is almost 5 inches tall which makes him taller than the turtles themselves. His animated appearance fits in perfectly with the rest of the line, although he doesn't match his cartoon appearance; Playmates still can't seem to get the colors right on Splinter's face, it seems. 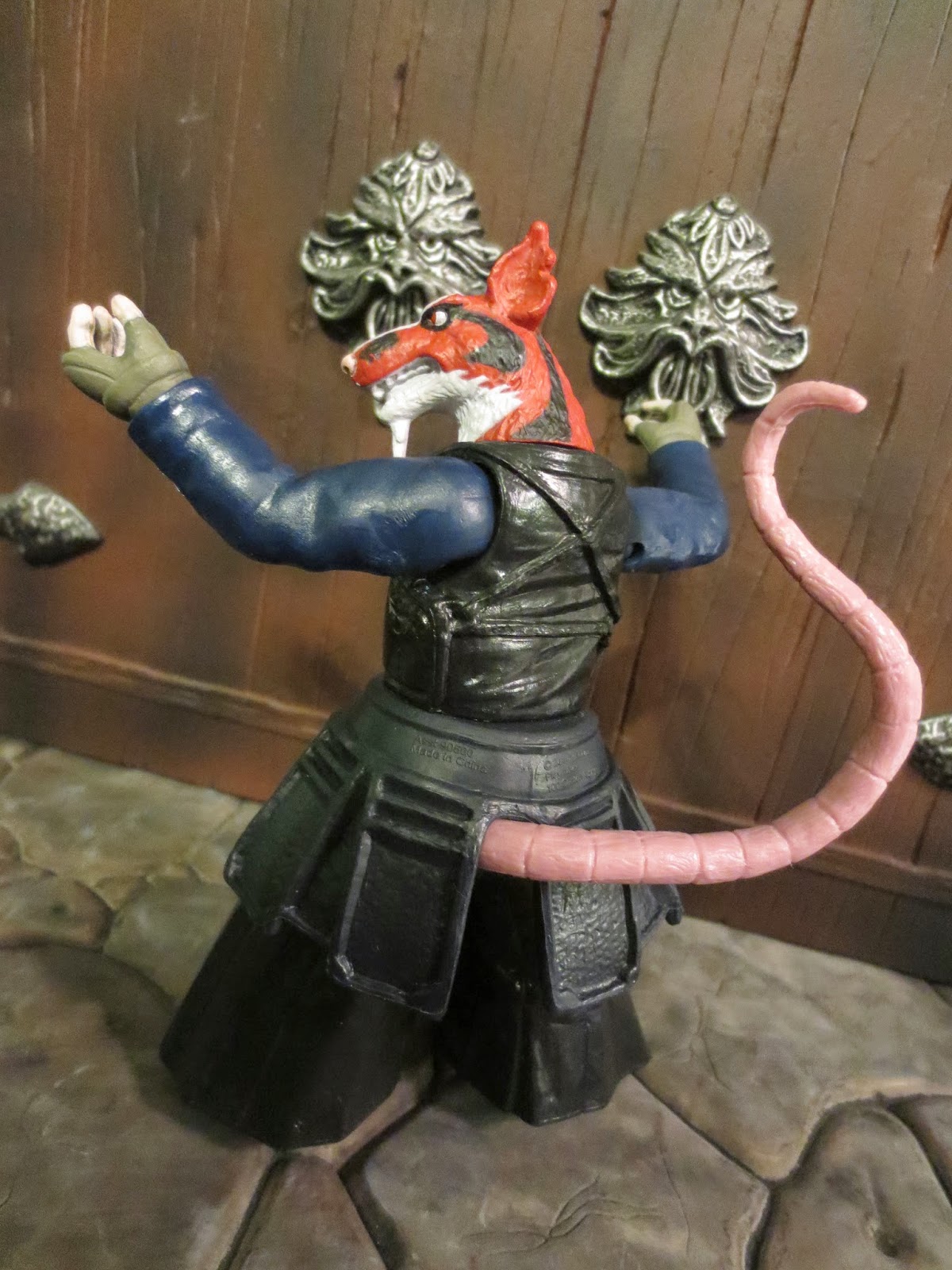 Like most of the TMNT figures, Splinter's articulation is all over the place. He features: swivel ankles, a swivel waist, swivel/hinge shoulders, swivel wrists, a swivel tail, and a swivel neck. From the waist down, this guy is pretty static, as his legs are simply solid. His upper body, while much more limited in motion than many other modern toylines, happens to be fairly fun to play with. I found that I could get some rather neat poses out of him, although I wish his shoulders were a bit more mobile. He's very sturdy and his tail doesn't fall off like the first release of Splinter's tail tended to. My guess is that this figure is going to get a lot of hate from TMNT collectors because of how static he is, yet I find myself picking him up rather often. Go figure. 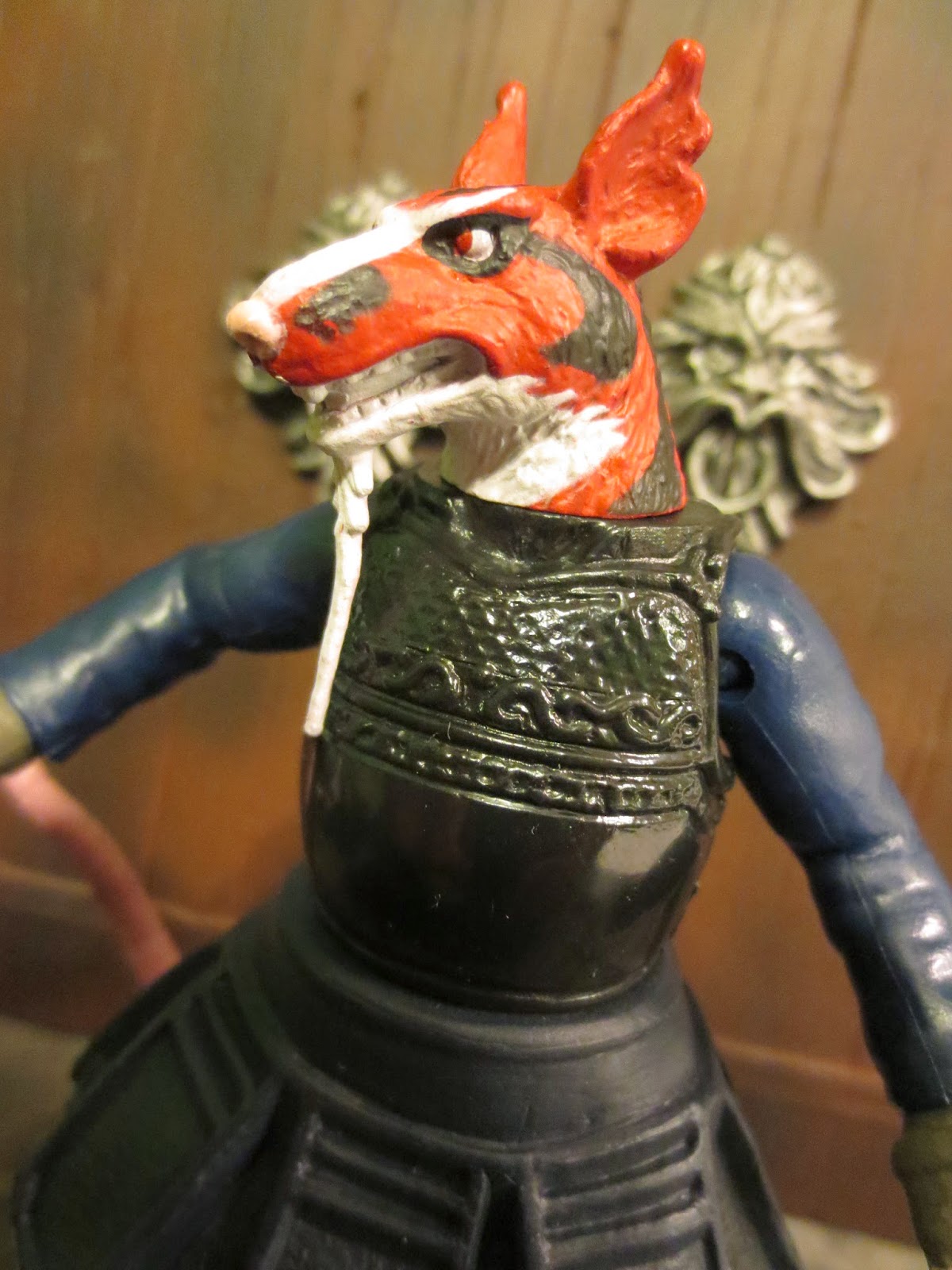 The sculpt is rather nice on this figure and seems to fairly accurately reflect a practitioner of kendo. Splinter's wearing a very traditional set of kendogu training armor including the kote (gauntlets), do (chest armor), and tare (hip and waist armor). The tare is made of a softer rubbery material with some nice texture and detail to it. The do and torso are hard and smooth and just a bit glossy. You can see the straps holding on the do on the back of the torso and some minor sculpted detail on the front. The most interesting part of the sculpt is Splinter's baggy pants. They're hard, hollow plastic, but they do have some neat little folds and wrinkles sculpted on. The head sculpt is different from the first release of Splinter as this version has an open mouth and is bearing his teeth. He looks pretty fierce. 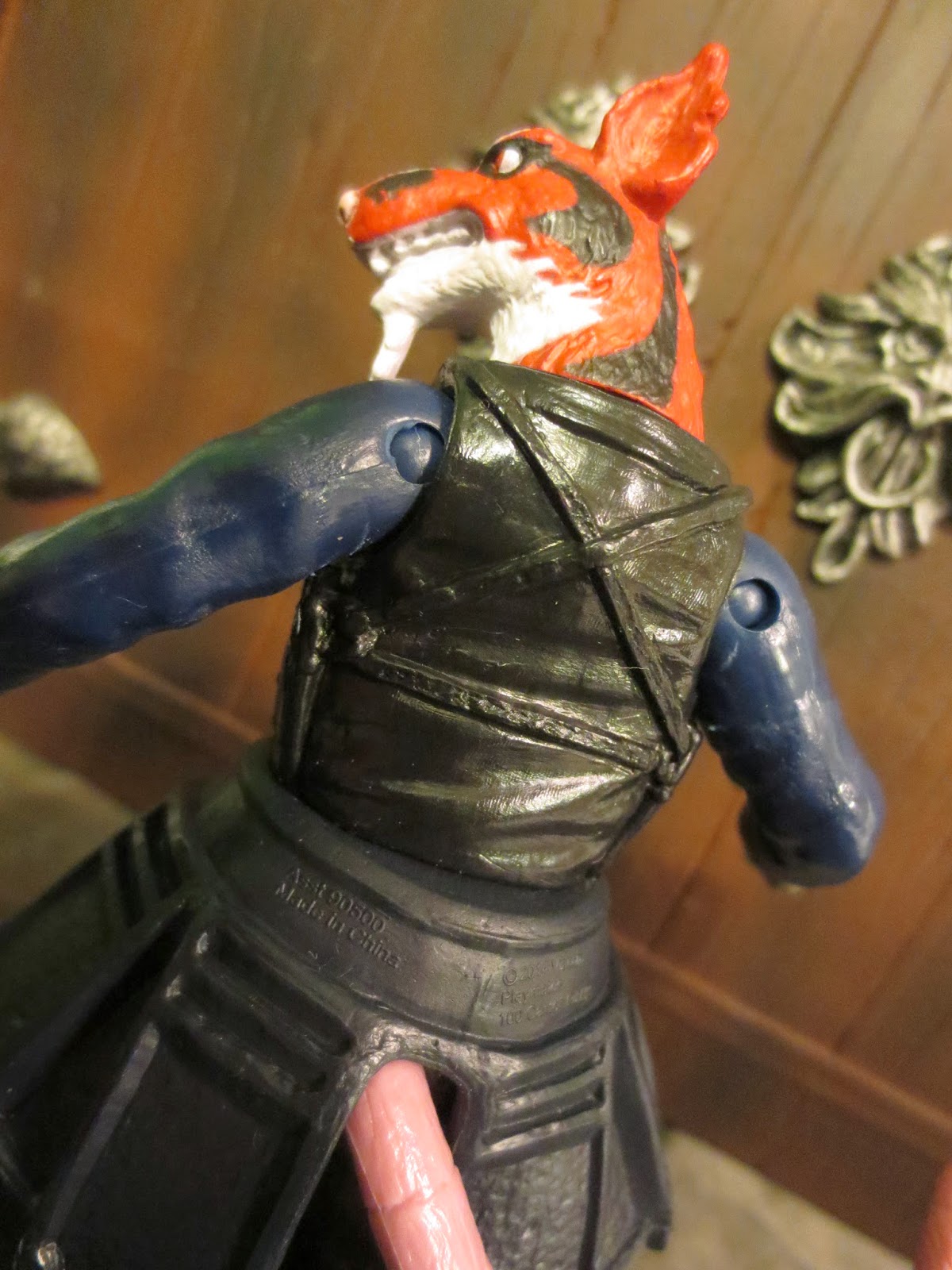 Unfortunately, there is very little paintwork here to bring out the few sculpted details. Other than the hands and head, everything is simply the color of the plastic in which it was molded. The torso is a glossy black and the straps and shirt underneath are no different from the do. The head is very colorful, as Splinter almost has a brindle color scheme going on here (he kind of looks like my Boston Rat Terrier), but once again Playmates hasn't released a color scheme that matches up with the more traditional look of the Nickelodeon cartoon. I'm not sure if Playmates just neglected to paint the feet or if Splinter is supposed to be wearing a blue bodysuit of some kind. I'm going to guess the former but assume the latter since I do think it looks OK. This could have been a truly impressive figure, however, with a bit more paint detail. 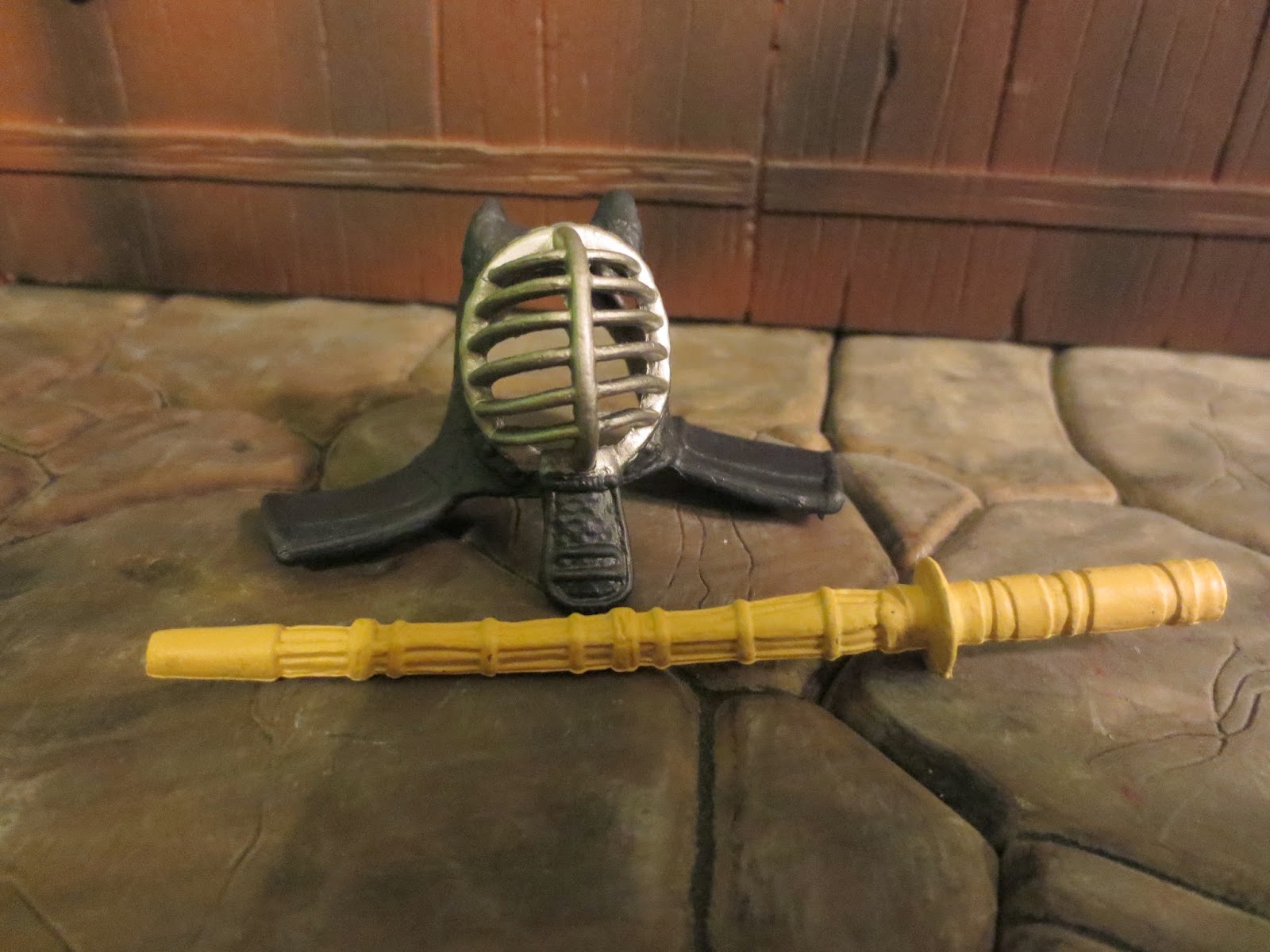 Splinter comes with two accessories that really complete his look: a men and a shinai. The men is the traditional combined face mask with attached shoulder protectors. It's molded in a soft, rubbery plastic that easily slides over Splinter's head. The cage like face mask is sculpted and painted with a silver paint . I really like the look of this accessory, particularly because it has holes for Splinter's ears! The shinai is a flexible, bamboo training device used in lieu of an actual sword for practice and competition. Splinter's is made from a somewhat soft plastic and molded in a great tan plastic. It has a nice amount of detail and looks perfect when held in either hand. 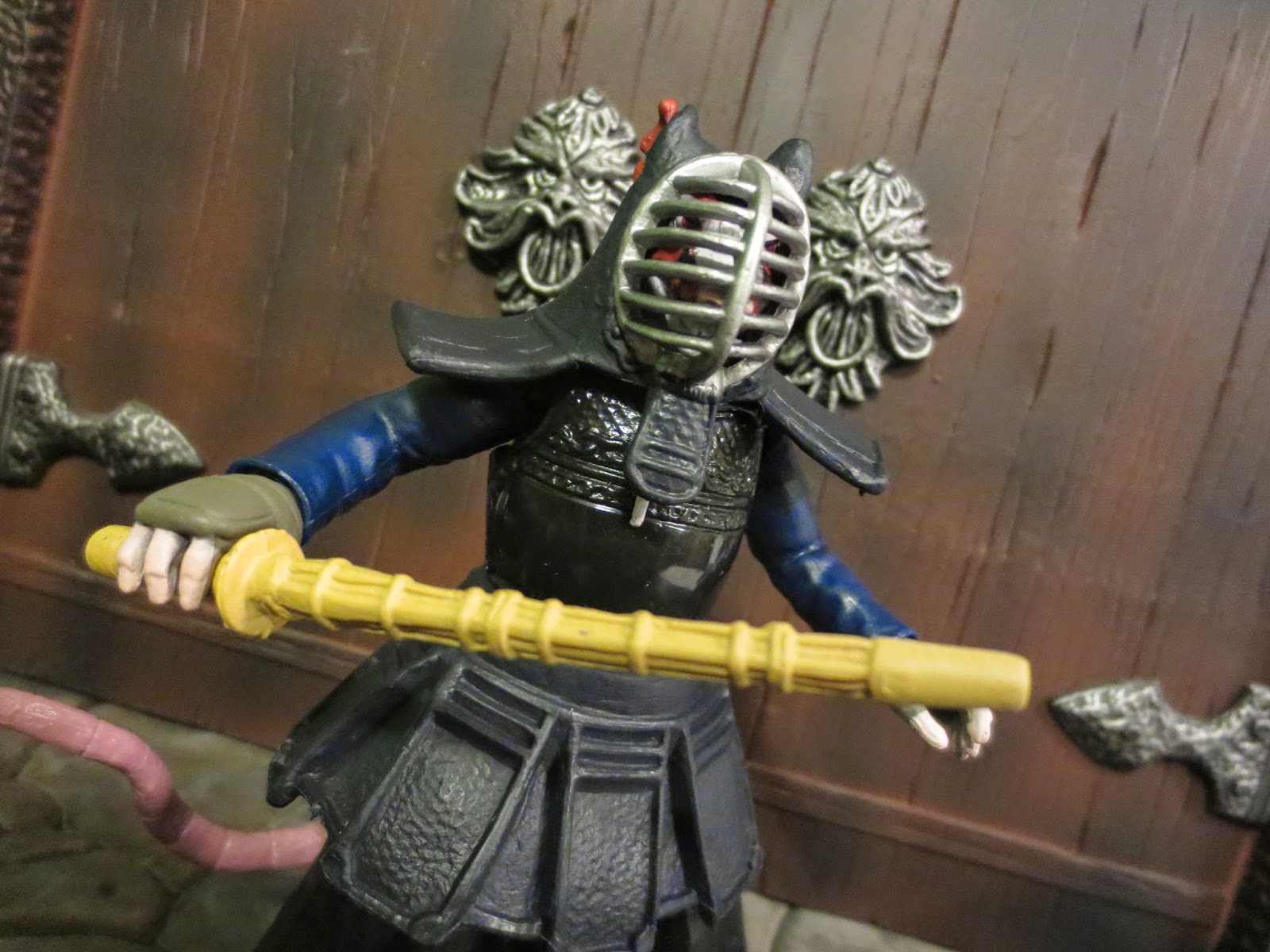 So...Dojo Splinter. He's a figure with minimal paint applications and absolutely no articulation in his legs other than swivel ankles. He's also kind of a neat variation of one of my favorite TMNT characters that somehow seems to transcend being a rather sub par figure by being inexplicably fun. Don't ask me, I don't know why. Still, I can recognize that he's definitely not the best TMNT figure in the new line and certainly will be the subject of lots of ire from may fans and collectors. I think in the end, I'm giving him a Good. He's definitely not a highlight of this line, but for fans of Splinter or those intrigued by the very traditional kendo styled armor, Splinter offers something cool you don't see every day. I probably like him more than most, but then again, I'm allowed to: This is my review, darn it! 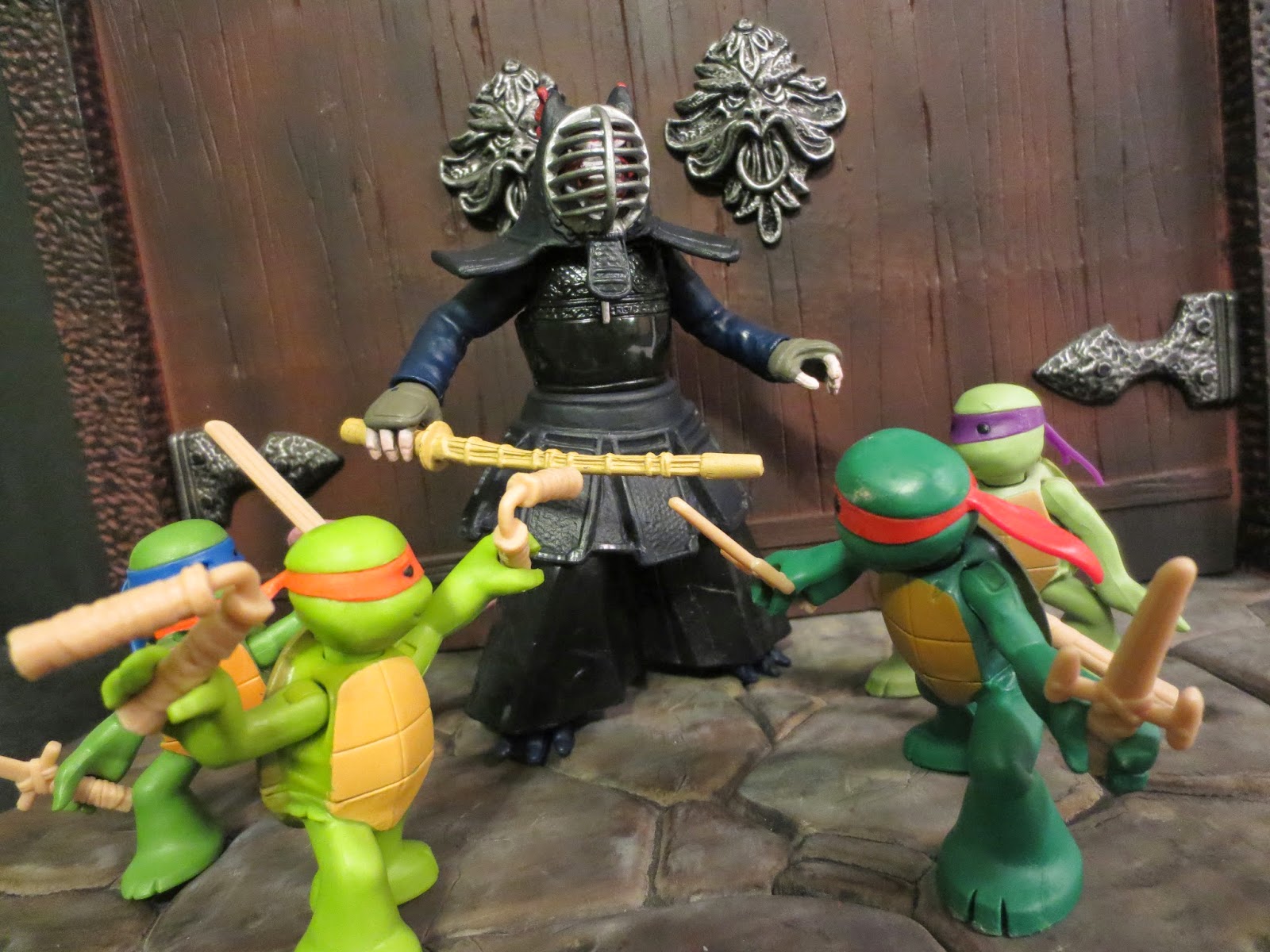 Check out our other TMNT reviews: 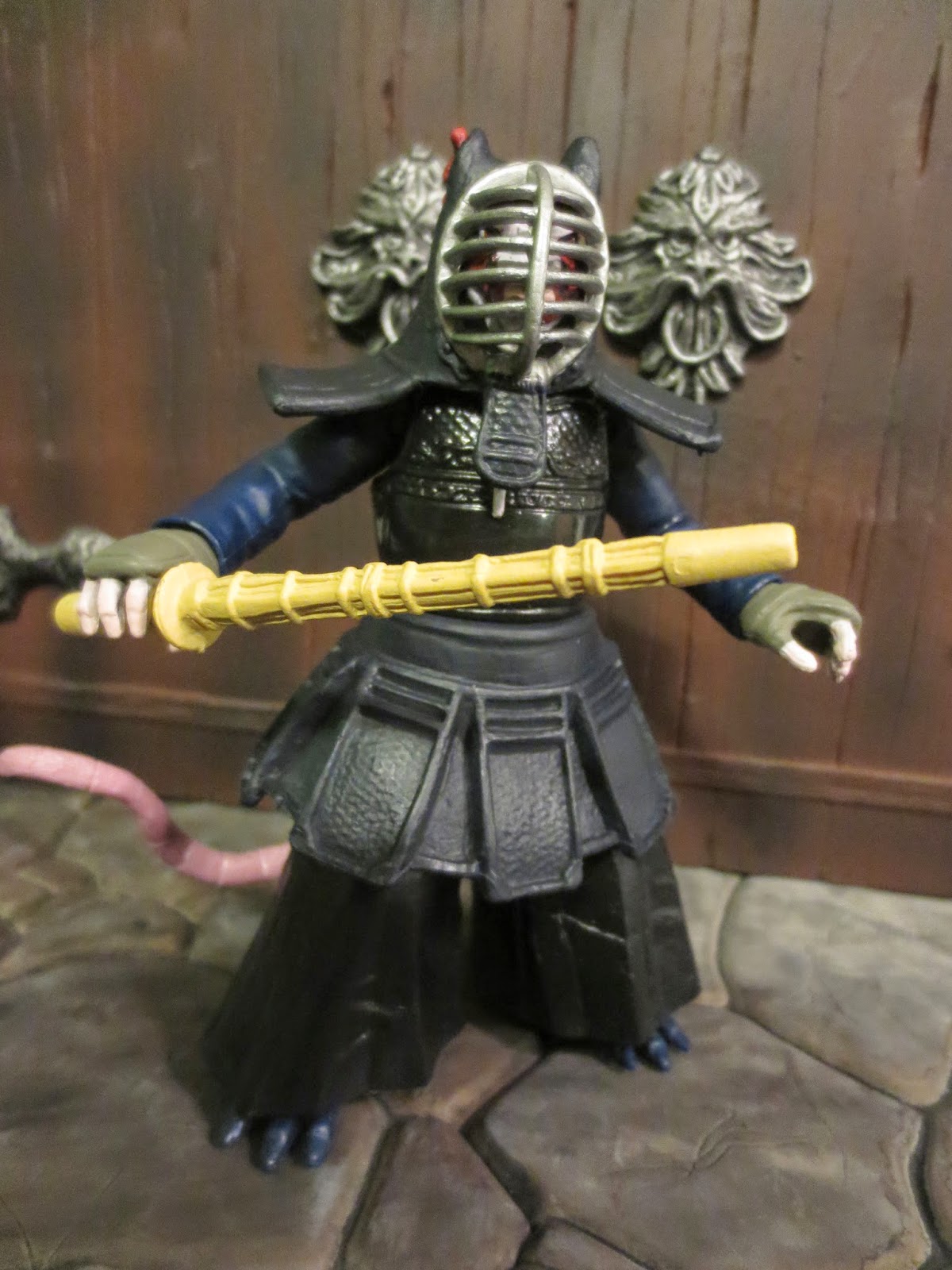