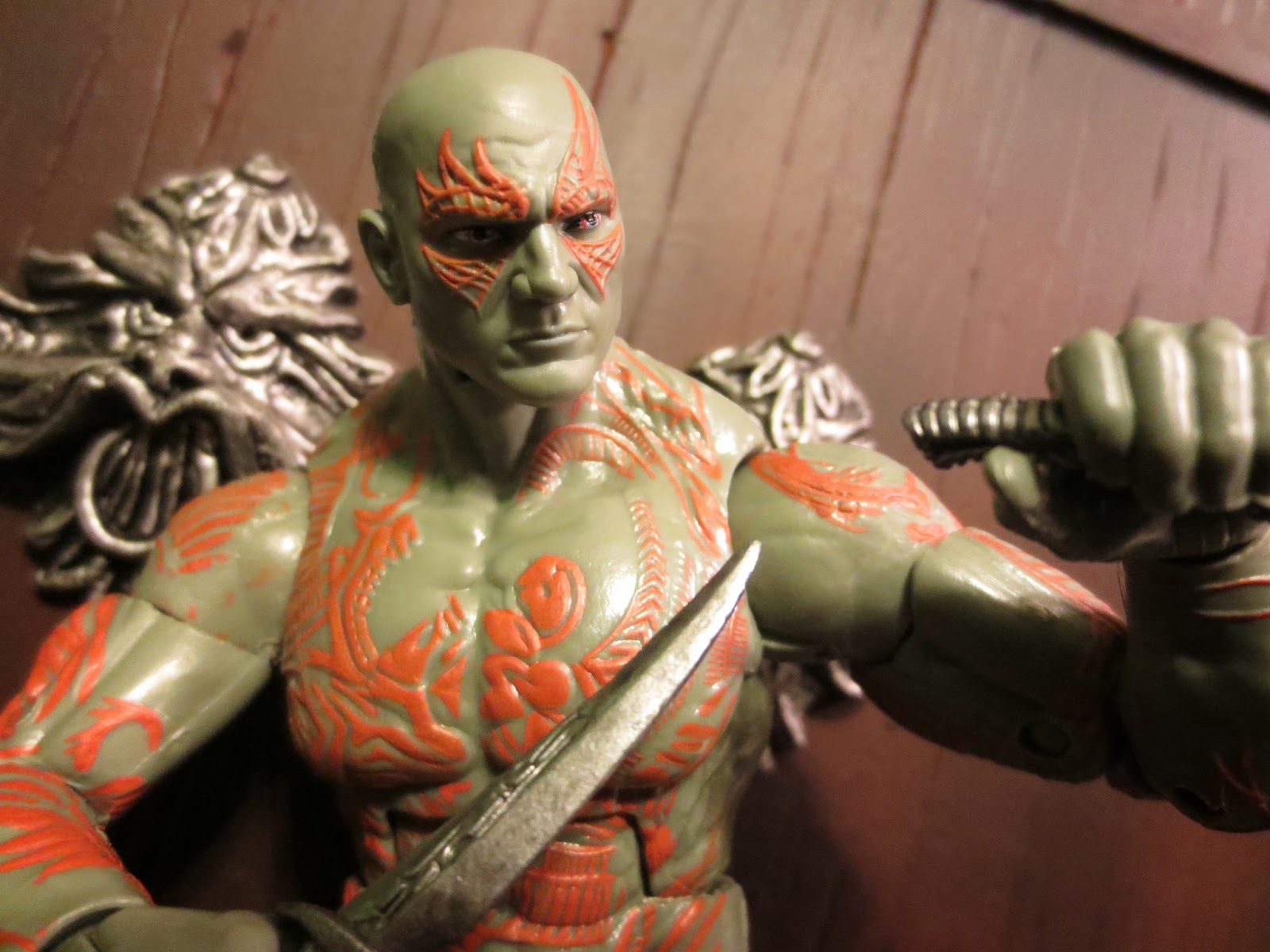 If you've heard me mention Guardians of the Galaxy any on an episode of The Confirmed Epic Podcast, you know that I'm insanely excited for the movie. Heck, I'm actually getting together the pieces for a Star-Lord costume for Heroes-Con in Charlotte this coming weekend. Today I'm going to be looking Drax, another figure from Hasbro's Guardians of the Galaxy themed Marvel Legends series. Played by WWE wrestler Dave Batista, Drax the Destroyer is a man with a past and a mission who appears the be the strong, silent member of the Guardians of the Galaxy. While I don't think these figures are technically supposed to release until June 20th, they've been pretty widely available at a number of retailers and e-tailers. Perhaps it's because a comic version of Drax the Destroyer was released fairly recently in the Arnim Zola "Return of Marvel Legends" series, but he seems to be one of the easier figures to find in this series. The case of eight figures includes two Star-Lords, two Iron Mans, and one each of Gamora, Drax, Rocket Raccoon, and Nova. I hope these guys are easier to find than the Amazing Spiderman 2 and Captain America 2: The Winter Soldier figures, as there are figures from those sets I've never even seen. Also, this wave has Groot as a build-a-figure, a character who is one of the core Guardians of the Galaxy members. It'd be a shame if fans and collectors couldn't build him. I guess I'll stop rambling, however: put on your Awesome Mix and join me for a review of Drax after the break.... 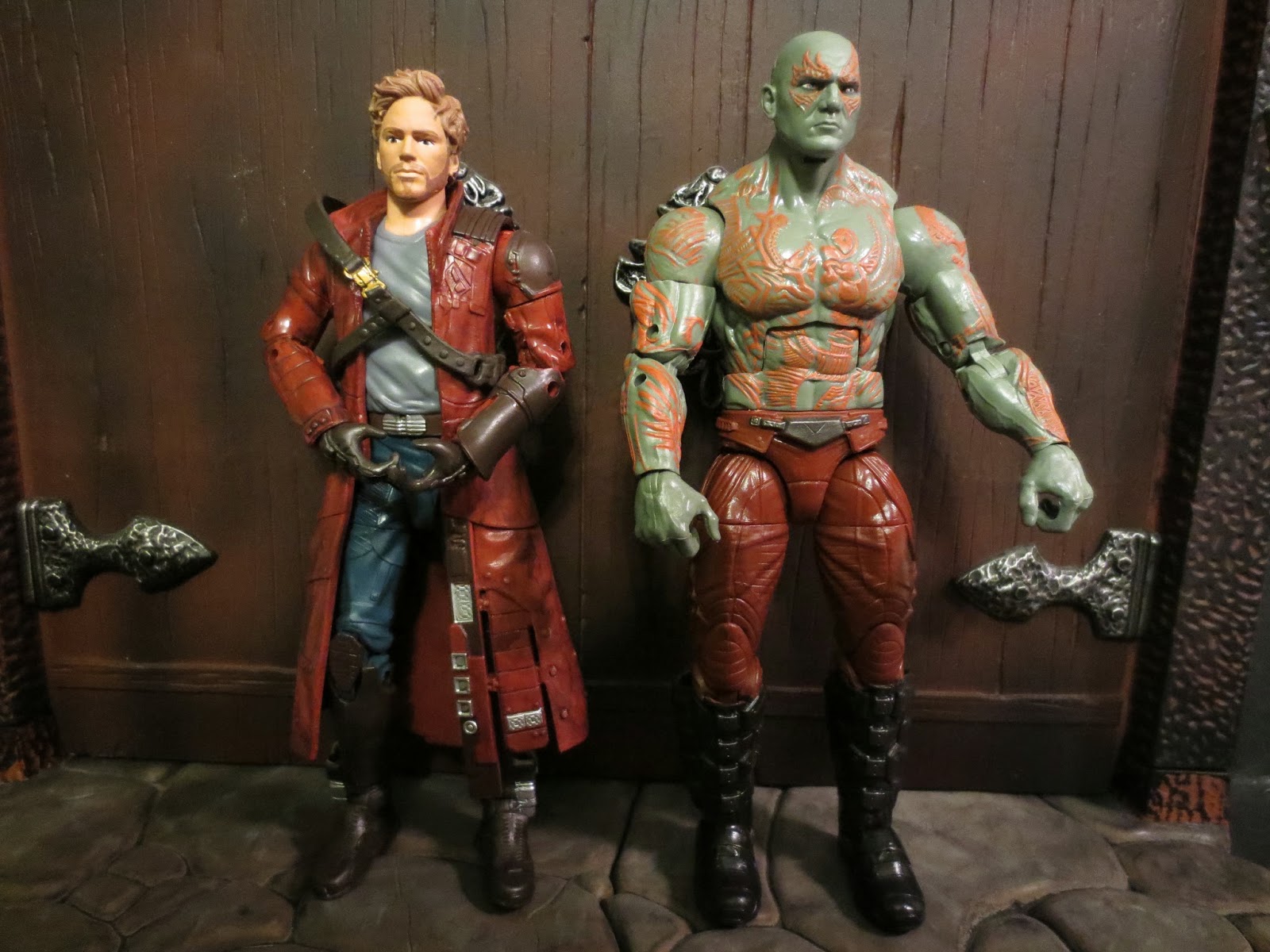 Drax stands about 6 3/4 inches tall (he's noticeably taller than Star-Lord) and is rendered in a style that looks to nicely capture his film appearance while still being compatible with most of the comic inspired Marvel Legends action figures that have been released by both Toy Biz and Hasbro. I don't own the former Marvel Legends Drax the Destroyer figure, but from what I've seen movie Drax is a bit shorter than him. 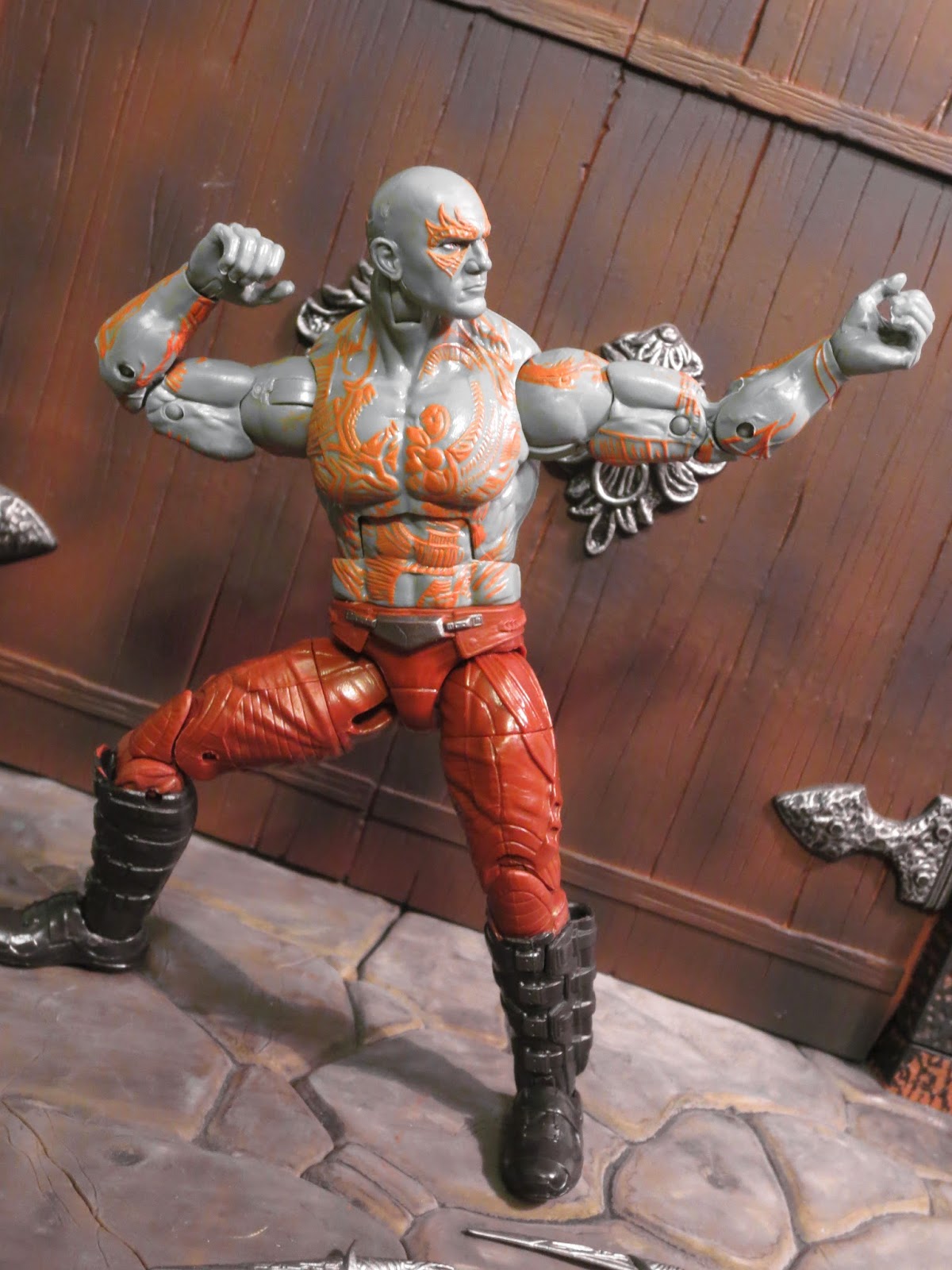 Drax has some really good articulation that makes him incredibly fun to pose and play with. He features: swivel/hinge ankles, double hinge knees, swivel thighs, ball jointed hips, a swivel waist, an ab hinge, swivel/hinge shoulders, swivel biceps, double hinged elbows, swivel/hinge wrists, a hinged neck, and a ball jointed head. Not only does all of the articulation work well, but it also meshes quite well with the sculpt. Unlike many recent Marvel Legends figures that have limbs made with a very gummy plastic, Drax is molded with more solid arms. He's honestly has some of the best articulation, most solid articulation I've seen on an action figure in quite some time. Honestly, for many years I've held the basic male body in Masters of the Universe Classics as my gold standard of articulation for 6-7 inch figures, but I think Drax might take the cake as far as I'm concerned. He..wait for it... destroys the competition. 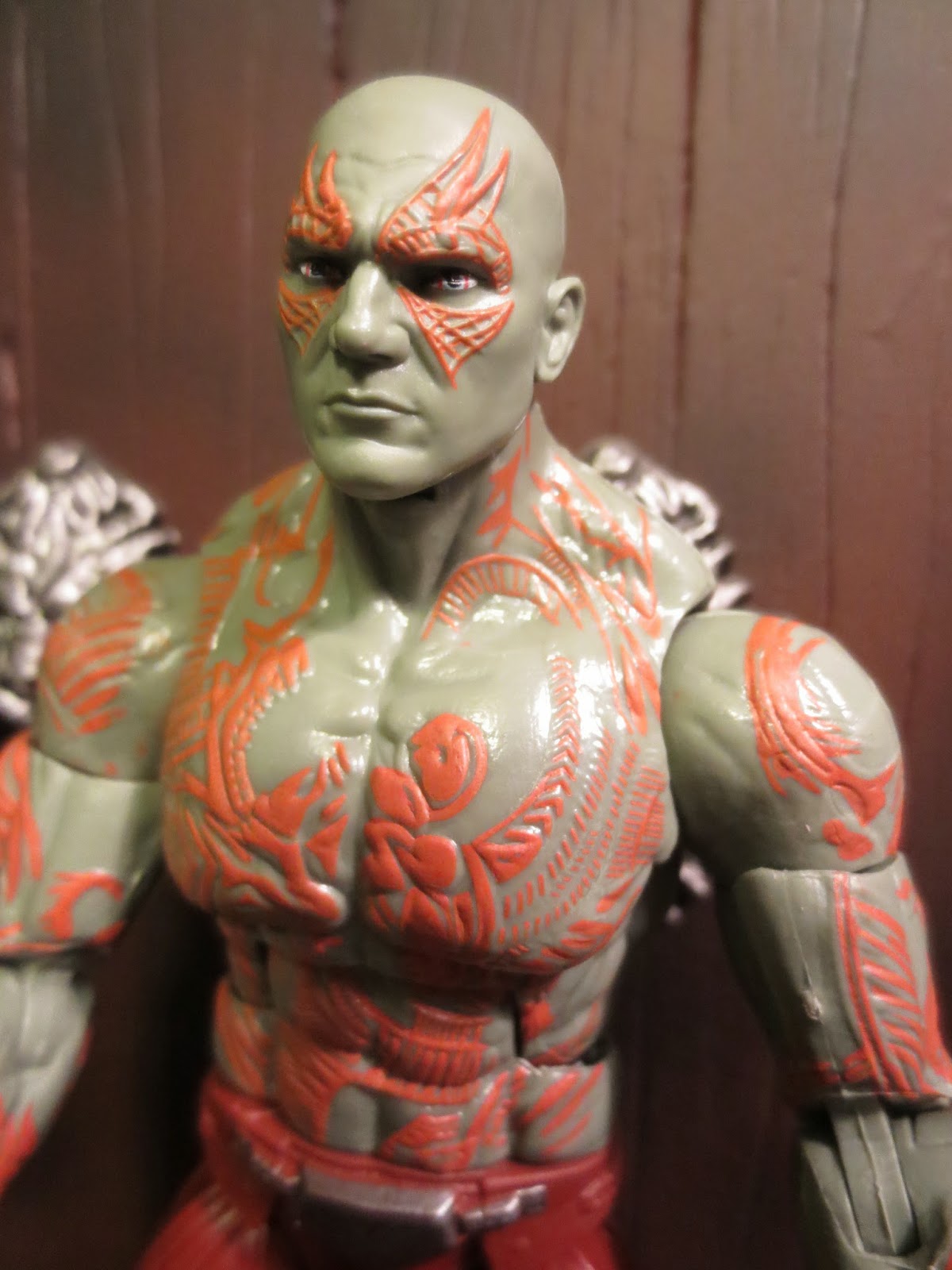 Since the characters in the movie seems to have such different looks (no traditional superhero outfits in Guardians of the Galaxy, it seems) Hasbro has had to give all of these guys unique sculpts. That's worked out perfectly as these are some very nice looking figures. Let's start at the bottom and work our way up; regarding Drax's boots,  I'm not sure I can describe them any better than Lloyd Christmas can. Not only are they covered with cool snaps and buckles, but they have sheathes built into the side to hold his knives. I'm all about function and fashion melding together! His pants are great as well, but what really sticks out are his cool tattoos. I'm not sure of the story behind them, but the tattoos are actually raised elements all over his body, arms, and face. This is some really awesome detail work and coupled with the fantastic head sculpt that is so clearly Dave Batista, this really is a stellar figure. 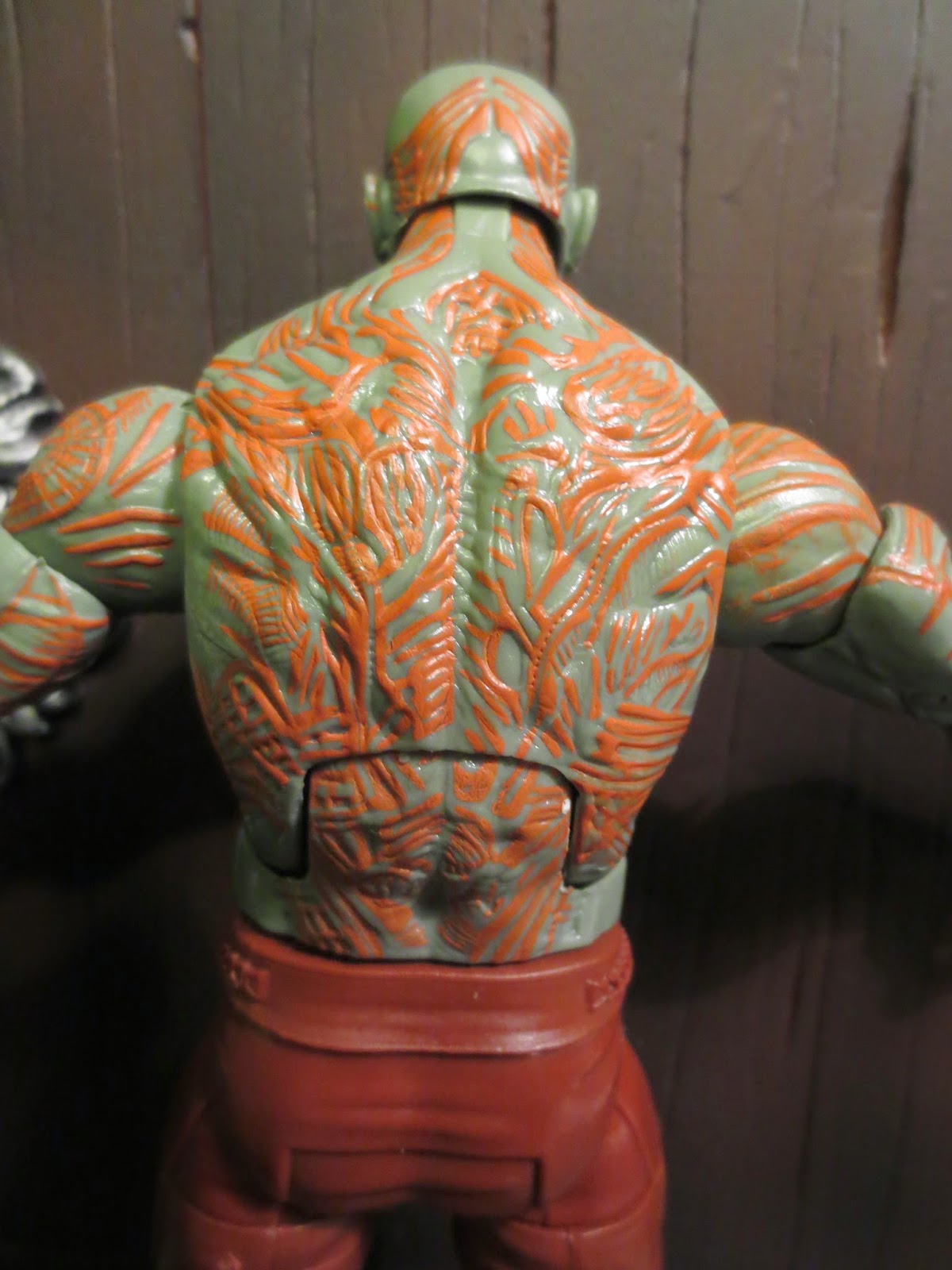 The paint work is simple in places, but no less effective. Much of the figure such as the pants, boots, and torso is be molded in the appropriate colors with a few minor details painted, but the tattoos definitely stand out. If you look closely, yeah you'll see a few lines that are off, but darn if those tattoos aren't impressive. They really look great and are incredibly neat and clean for a mass market line. I wish Drax had a dark wash on his pants or something, kind of like Star-Lord has on his coat, but otherwise this is very solid work. 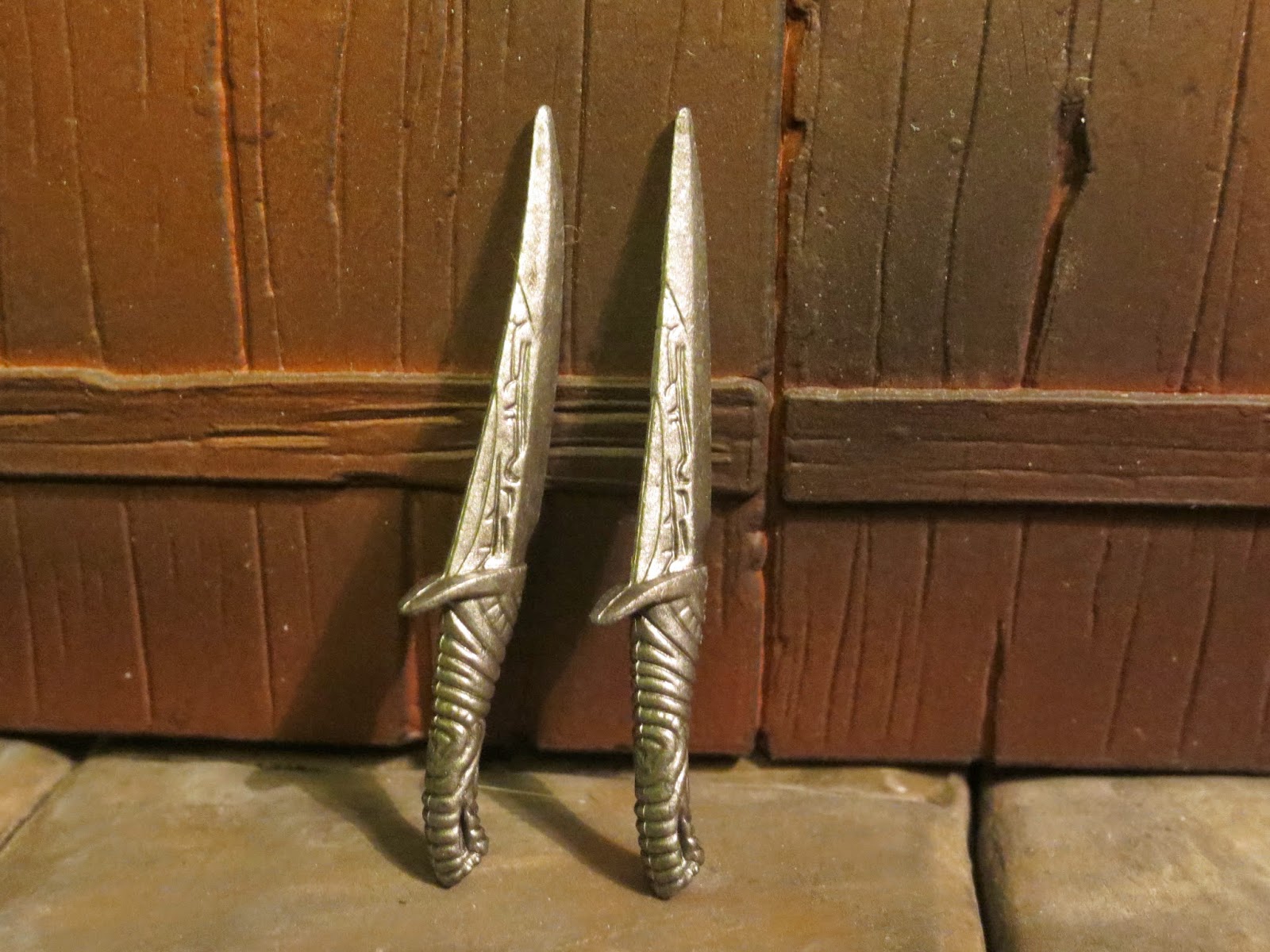 Drax doesn't come with a plethora of accessories like Star-Lord, but perhaps he comes with all he needs: His two nasty knives! Molded in a dark silver plastic with a nice dark wash, these are some great accessories. They're identical and look fantastic in a variety of poses when being wielded by Drax. They also fit easily into the sheathes on his boots. They're hard enough to not look like bendy toys, but flexible that you won't have to worry about them snapping. Of course, Drax also comes with a piece of the build-a-figure Groot. He's got the lower torso which I'll talk more about when I finally get the chance to build Groot. 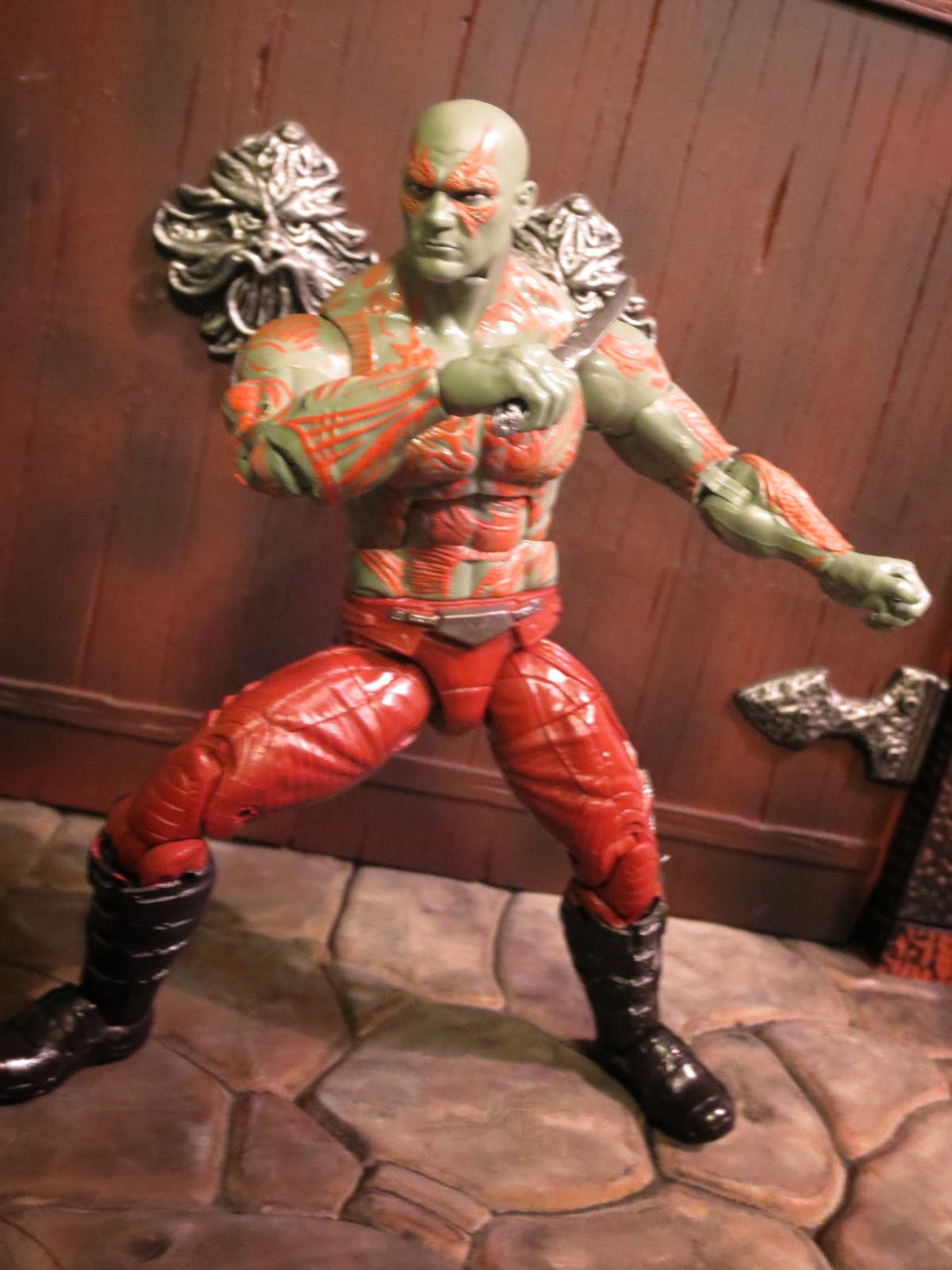 As much as I liked Star-Lord, he did have some problems with his rubbery elbows and knees. Drax has no such problems. He's just amazing and really surprised me as I definitely didn't expect to like him as much as I do. I like him so much, in fact, that I have no hesitation in giving him an Epic rating. Great sculpting, solid paintwork, good accessories, and some of the best, most functional articulation I've seen in quite some time make this a toy that is perfectly suited for kids or collectors. As I'm slowly building my Guardians of the Galaxy team, I'm really getting excited to see how these guys look on both my shelf and on the big screen. 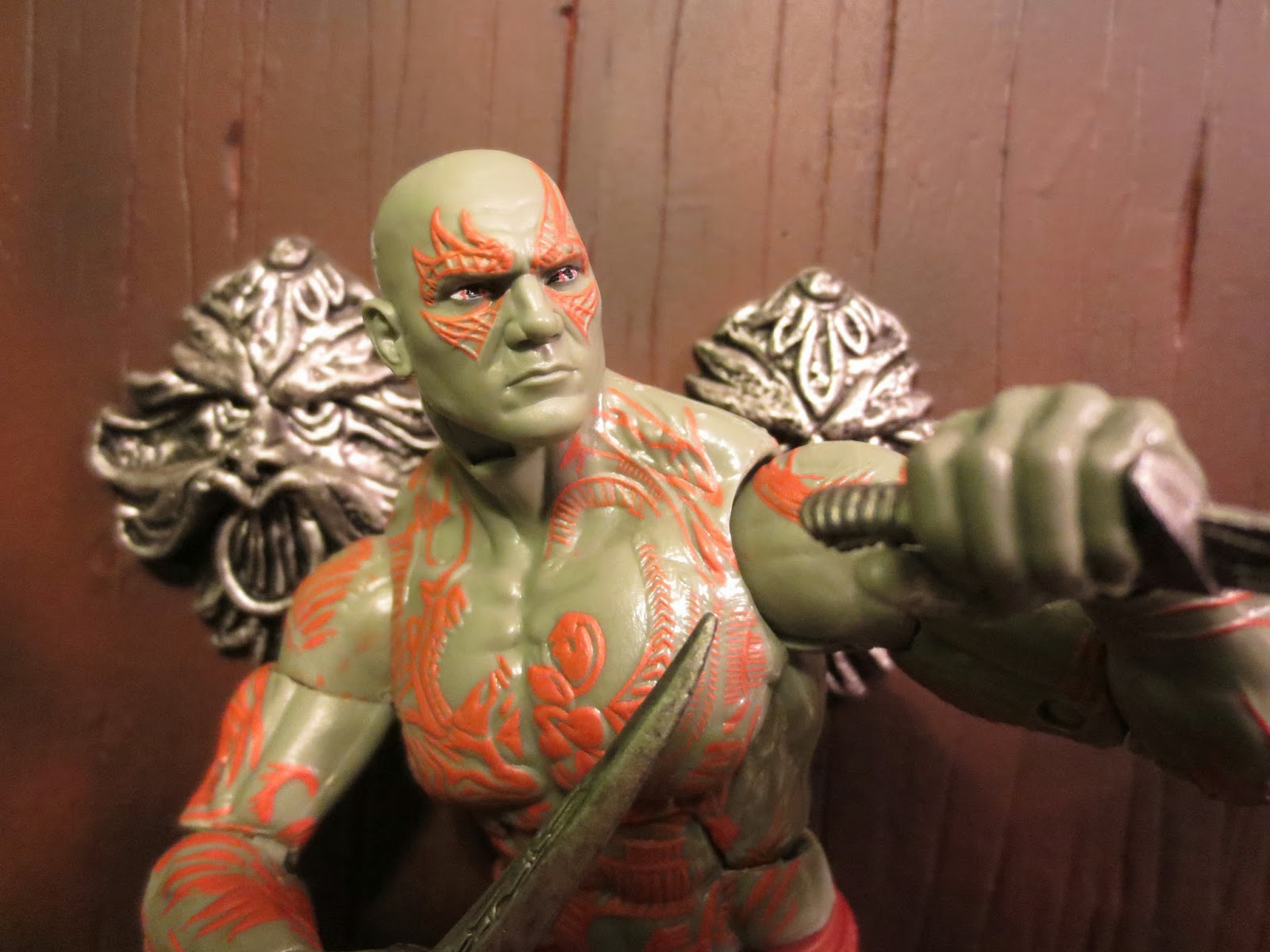 Both Big Bad Toy Store and Entertainment Earth have the Guardians of the Galaxy Marvel Legends series available for preorder, so check them out. I've also reviewed Star-Lord from this same series, as well as the following other figures from the Marvel Legends Infinite Series:
Baron Zemo
Hydra AgentRed Skull