Action Figure Review: Extendar from Masters of the Universe Classics by Mattel 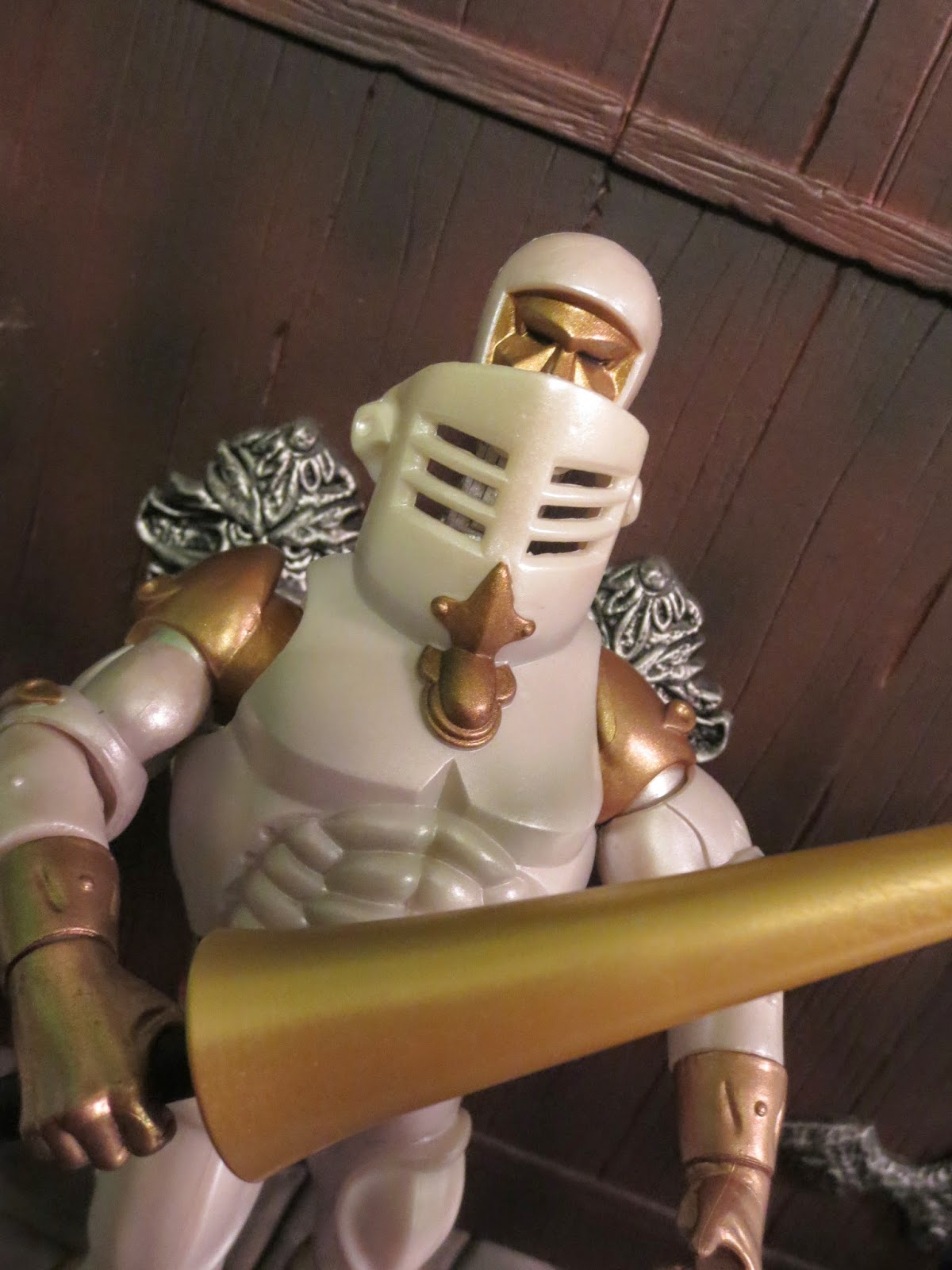 I was shocked to read on many of the various Masters of the Universe related forums that so many collectors seemed completely cold towards Extendar. Being one of the last few Heroic Warriors we need to complete the vintage line I figured he'd be a heavily anticipated character. Released as part of the 5th series of toys in 1986, Extendar was definitely a standout character during the year that I was really getting into MOTU (I was only born in 1983). For a line that pretty much covered everything (barbarians, sea creatures, skeleton wizards, and ninjas), it was pretty wild to think that we didn't really have a traditional knight themed character. While MOTUC already has one knight in the Geoff Johns' designed Sir Laser-Lot, Extendar is the original knight in shining armor that so many of us remember (even if he did kind of steel Mekaneck's gimmick). Ready for a look at Extendar? Then join me after the break... 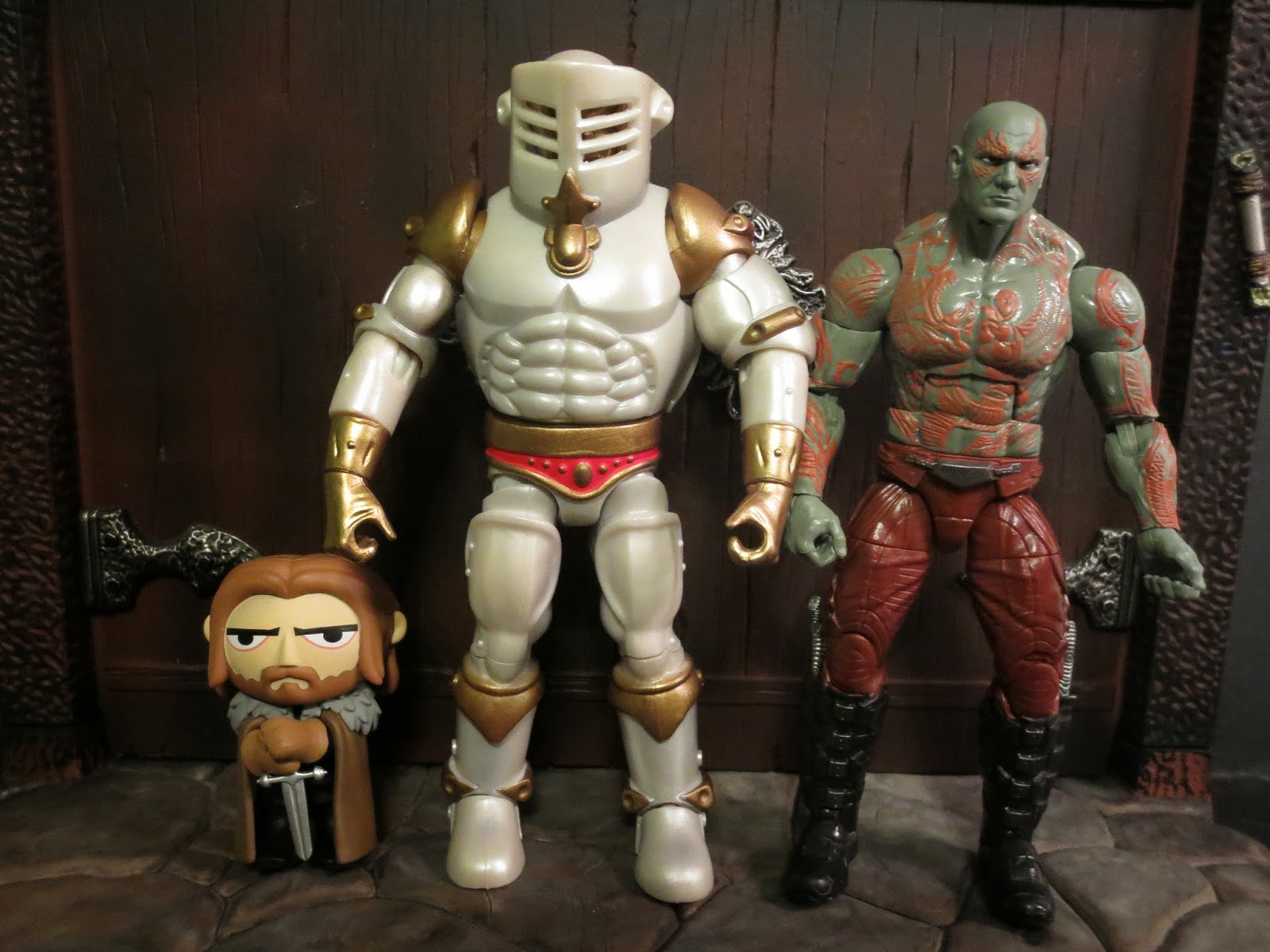 As has been a fairly common occurrence this year, Extendar  is made up of mostly new parts. In fact, other than the standard torso, he looks to be completely new! I'm quite impressed. Extendar stands around right around 7 inches tall and, as expected, looks awesome alongside his fellow Masters of the Universe Classics figures, or any toyline that needs a knight. 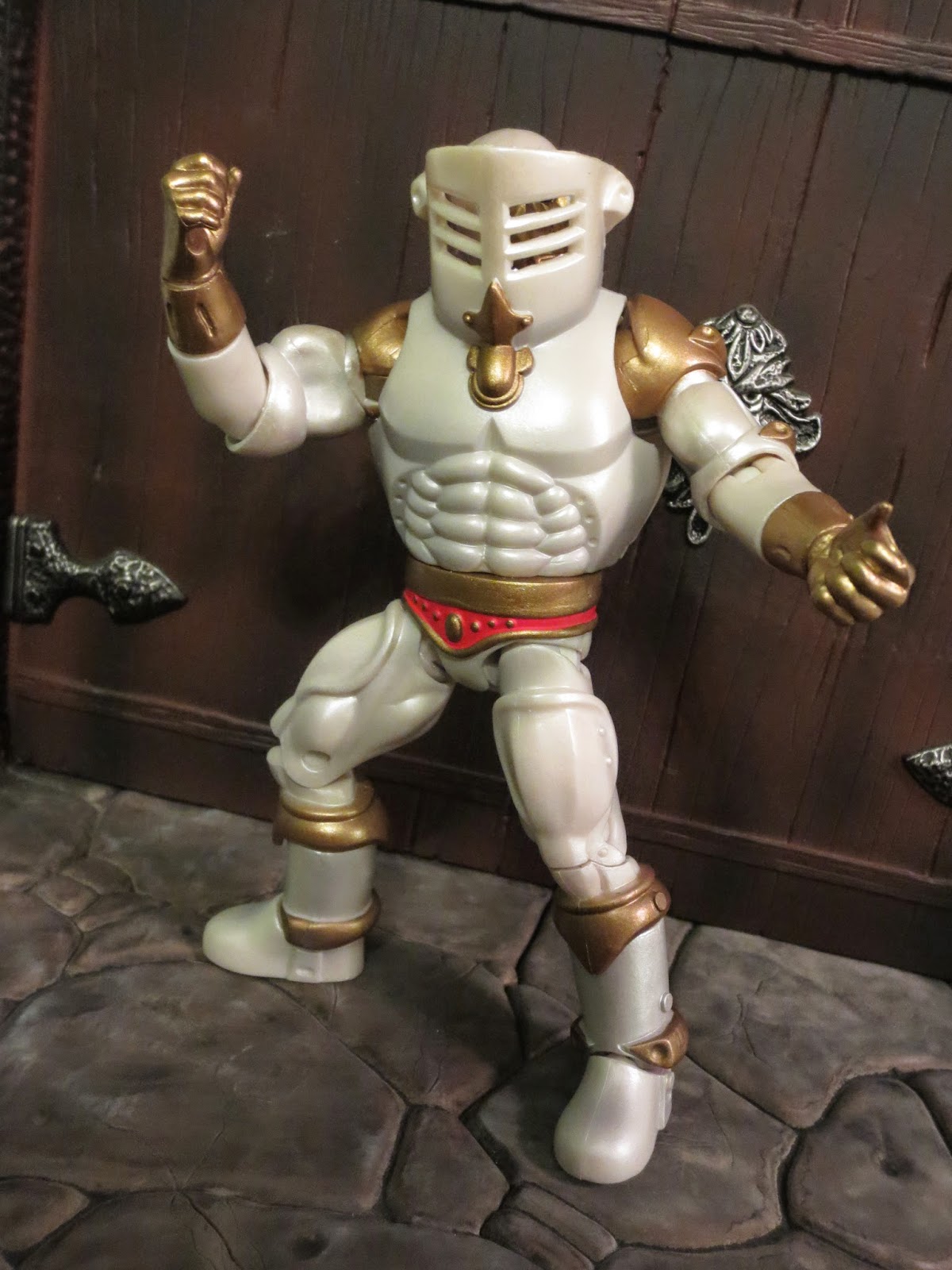 While he's made of mostly new parts, Extendar's articulation is similar to most other figures from the line with the exception of his arms having a few extra joints. He features: hinged ankles with minor lateral rocking, boot swivels, hinged knees, swivel thighs, swivel/hinge hips, swivel waist, an ab hinge, swivel/hinge shoulders, bicep swivels, swivel/hinge elbows, swivel forearms, swivel wrists, a hinged neck, and a ball jointed head. Overall everything works pretty well and it's interesting to see a MOTUC figure with extra articulation points such as the swivel/hinge elbows. Some of the articulation points are hindered a little bit by his armor (particularly his shoulders) but most function just fine. If there's anything that really stands out as odd, it's that part of Extendar feel a little softer and looser than other MOTUC figures. That can actually be explained as precautions taken to ensure that Extendar's action feature works. It doesn't bother me too much, but some other collectors have really not been happy with it. It's definitely not "gummy" though, not does it feel more fragile than a standard figure. 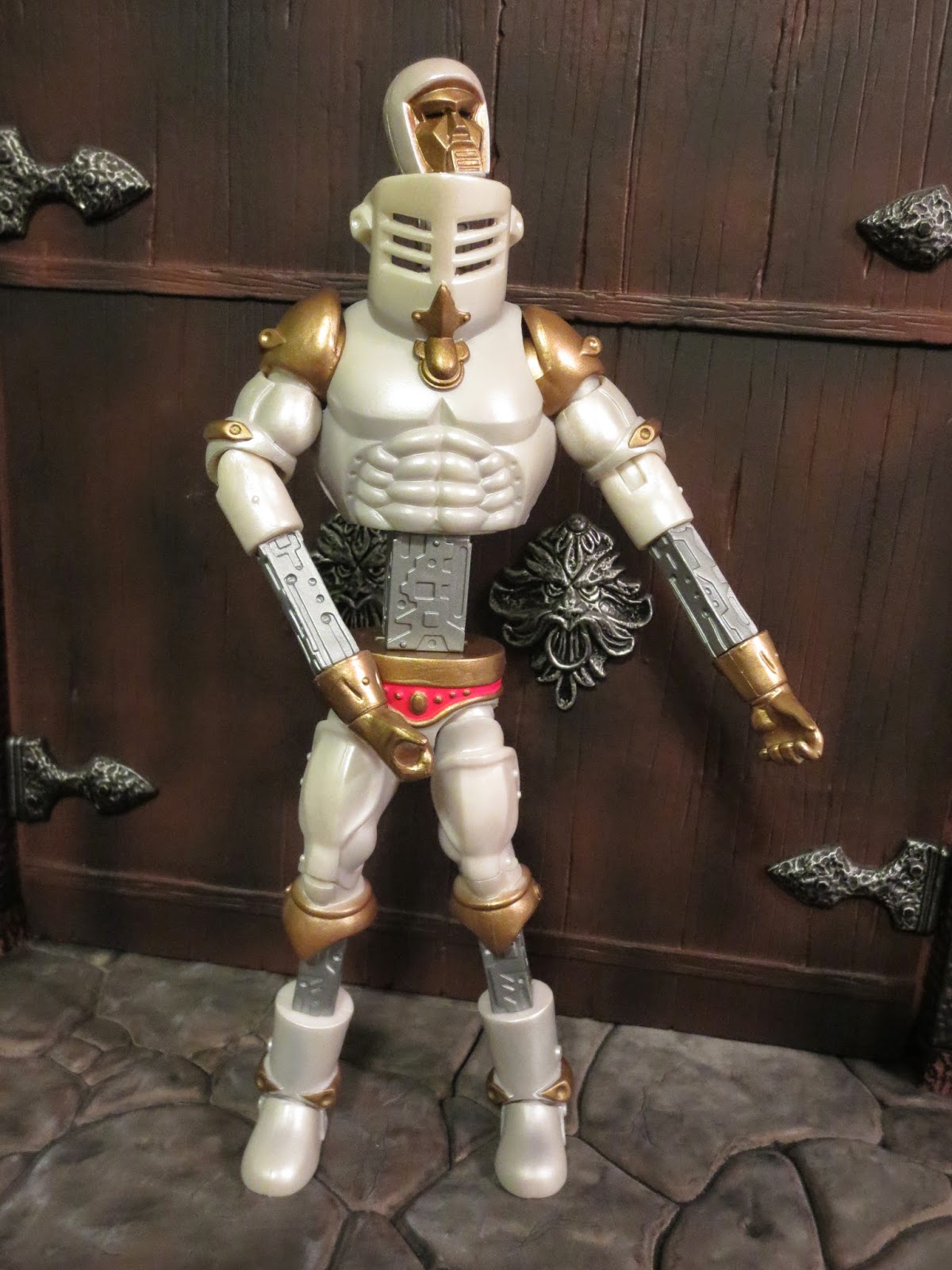 The vintage Extendar featured the ability to extend his torso, neck, arms, and legs by pulling them away from his body. Since MOTUC rarely features actual action features, Extendar's feature is replicated much like the modern Tallstar and Mekaneck figures by giving the character extra attachments that fit between various removable body parts. Extendar features six extensions (two for his legs, two for his arms, one for his neck, and one for his torso) that for the most part attach and detach fairly easily. The only problem I have is with the torso extension: It is a thicker piece that wants to keep splitting in half, causing the figure to tumble over. Other than that issue, the other extensions not only work fine but also increase the amount of articulation available to the character.  Not only is each extension covered with cybernetic looking details, but the neck extension also includes a peace sign on it just like the vintage toy. 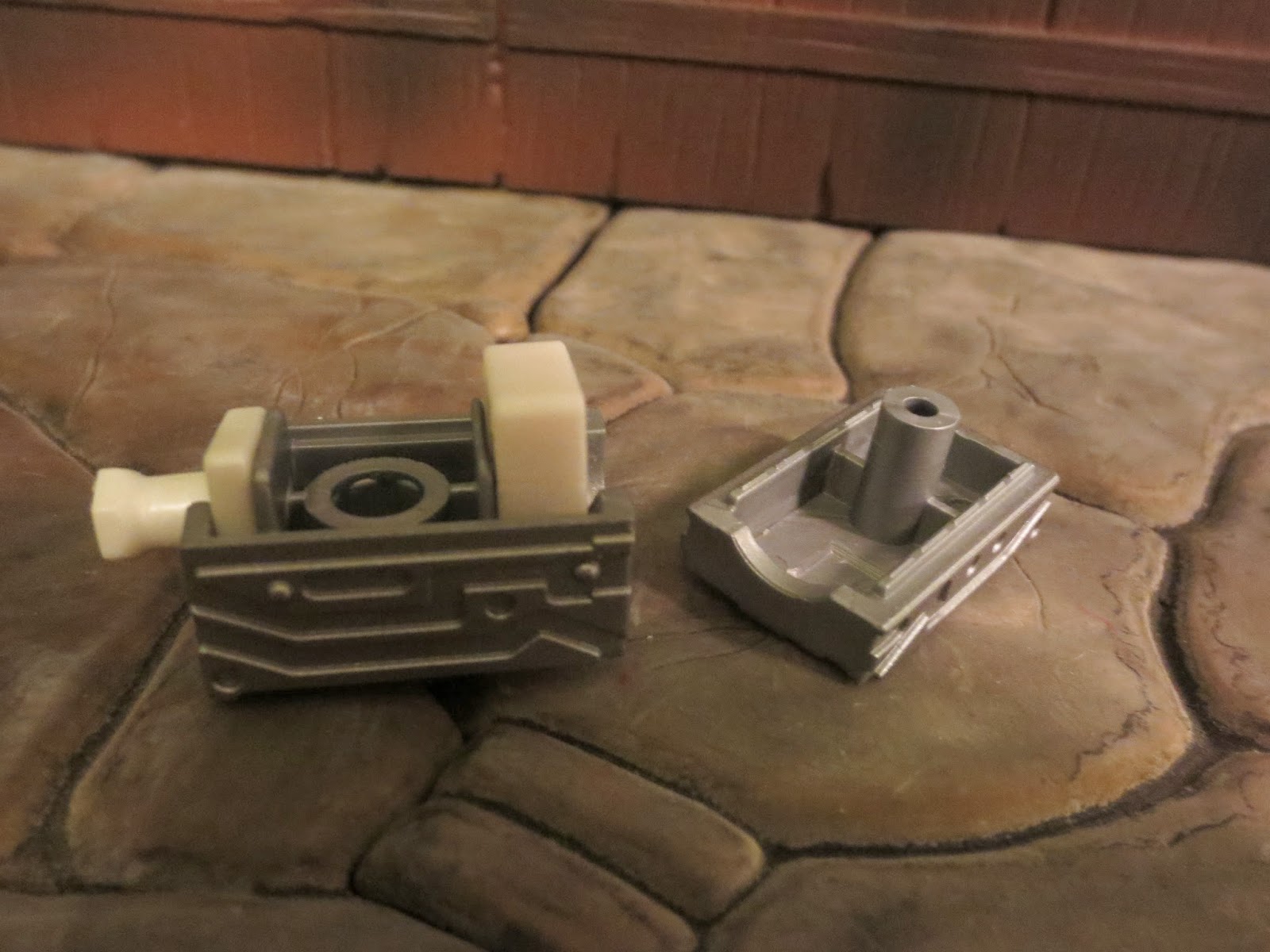 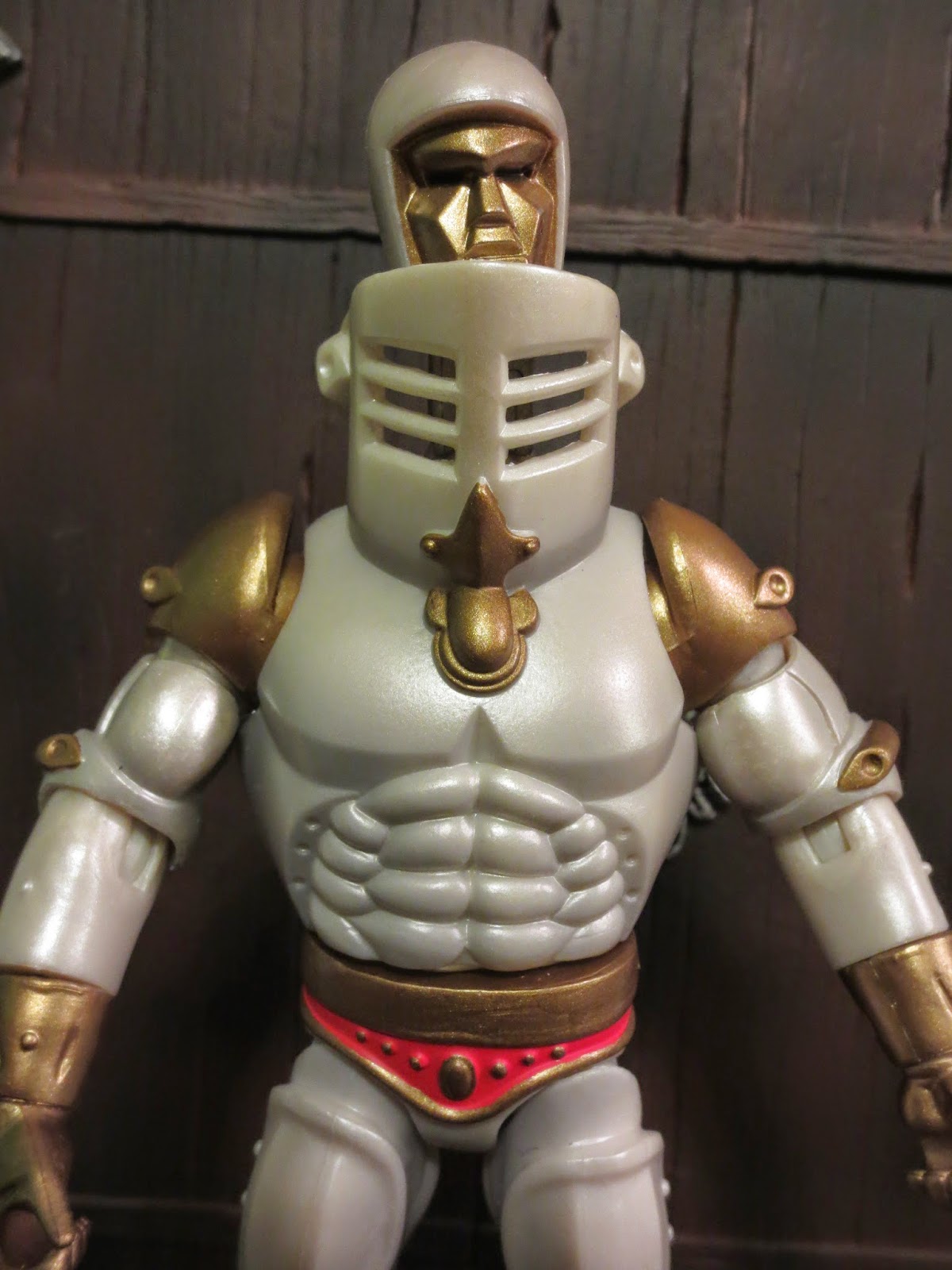 I was really impressed by how Extendar is almost a  new sculpt. He's a rather simple character but looks quite nice. His plate armor is created using a separate torso piece that shows his absolutely incredible abs and a raised faceplate that protects his head. Interestingly, Extendar has a very robotic face. He has a very angular, stern expression with what looks like a speaker box or mouth grill below his sculpted mouth. The facial expression kind of reminds me of Destro. His shoulders, elbows, and ankles have what appear to be various rivets holding his armored plates together while his biceps and thighs have raised additional plating. One of the bizarre things about the sculpt that you might notice is Extendar's wider belt piece. Apparently this was some sort of safety issue or something, but Extendar has a much wider waist piece to support the separating feature of the figure. It's something that you may not realize at first, but one you see it you'll definitely find a bit awkward. 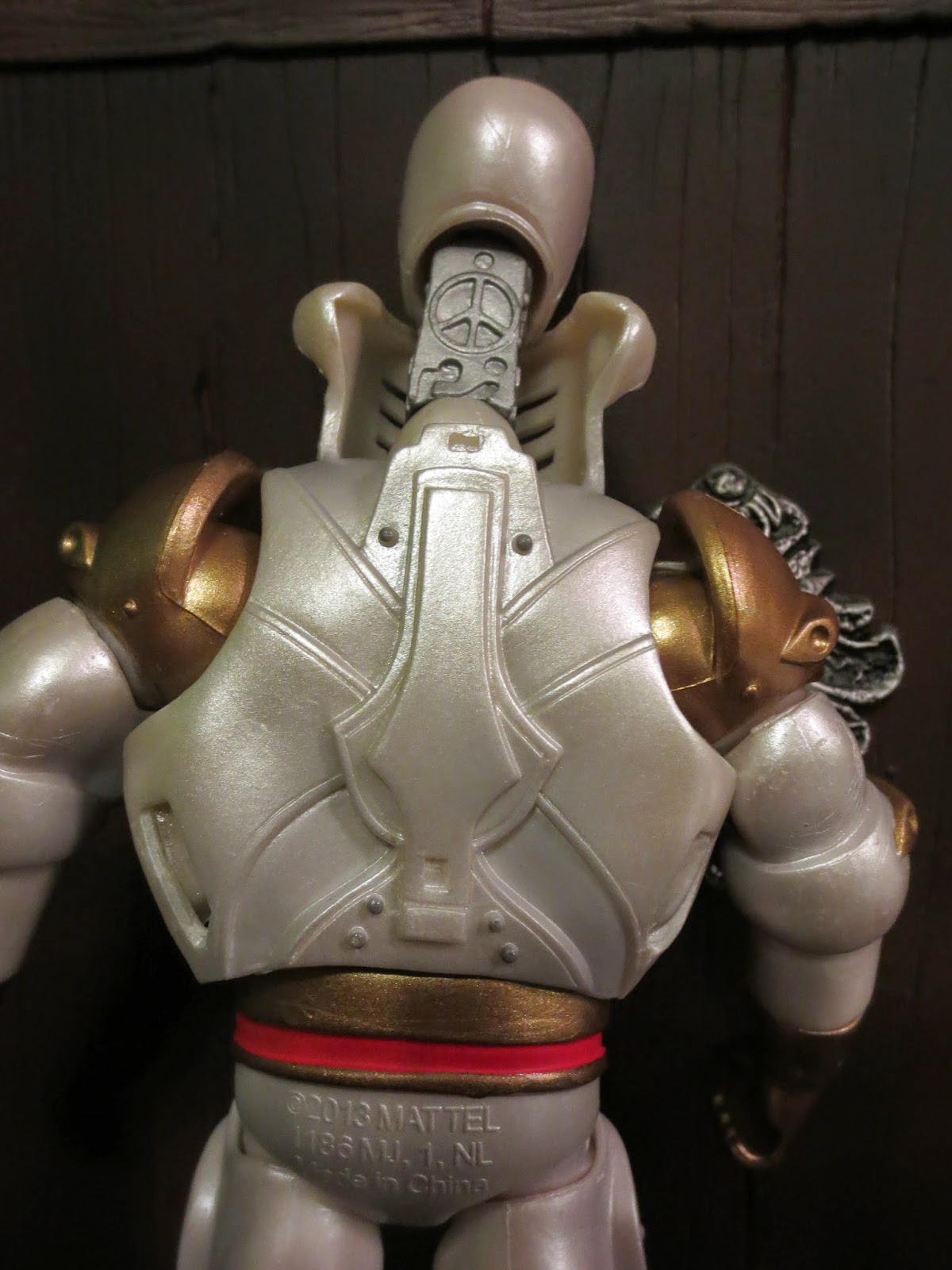 Extendar has a very basic color scheme of silver and gold. Well, his main body isn't a traditional silver but a very pearlescent, almost white silver. I don't have the vintage figure in my collection anymore, but I feel the color may be off just a bit. It doesn't look bad, but I think he could stand to be a bit more metallic looking. The gold looks great, though, and his various armored accoutrement have a nice metallic gold paint on them. It is rather neat and clean with hardly any slop to speak of in the paint work. There are only a few minor details such as some grey rivets on the back of his armor and his black eye slits. Solid work, all around. 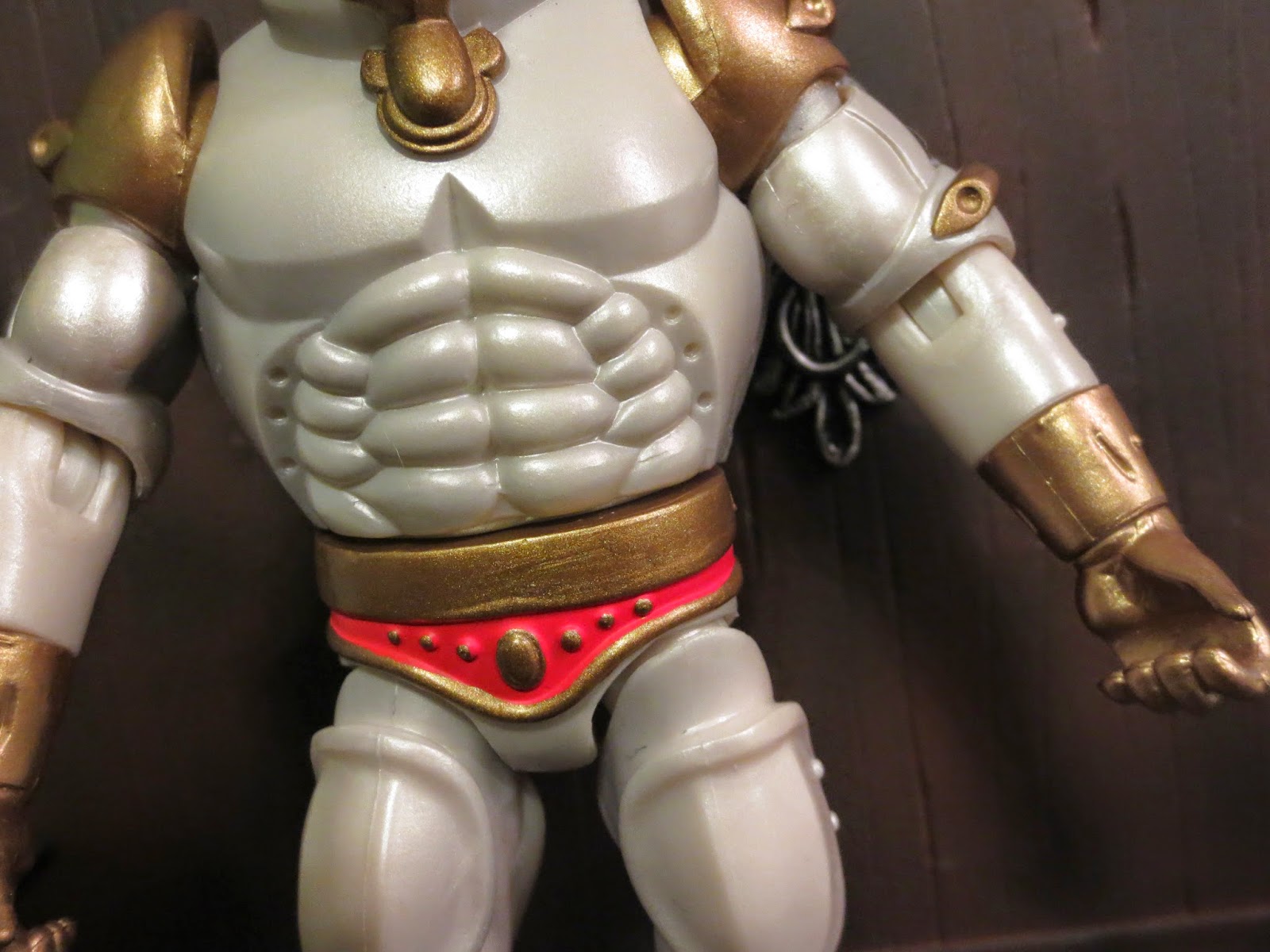 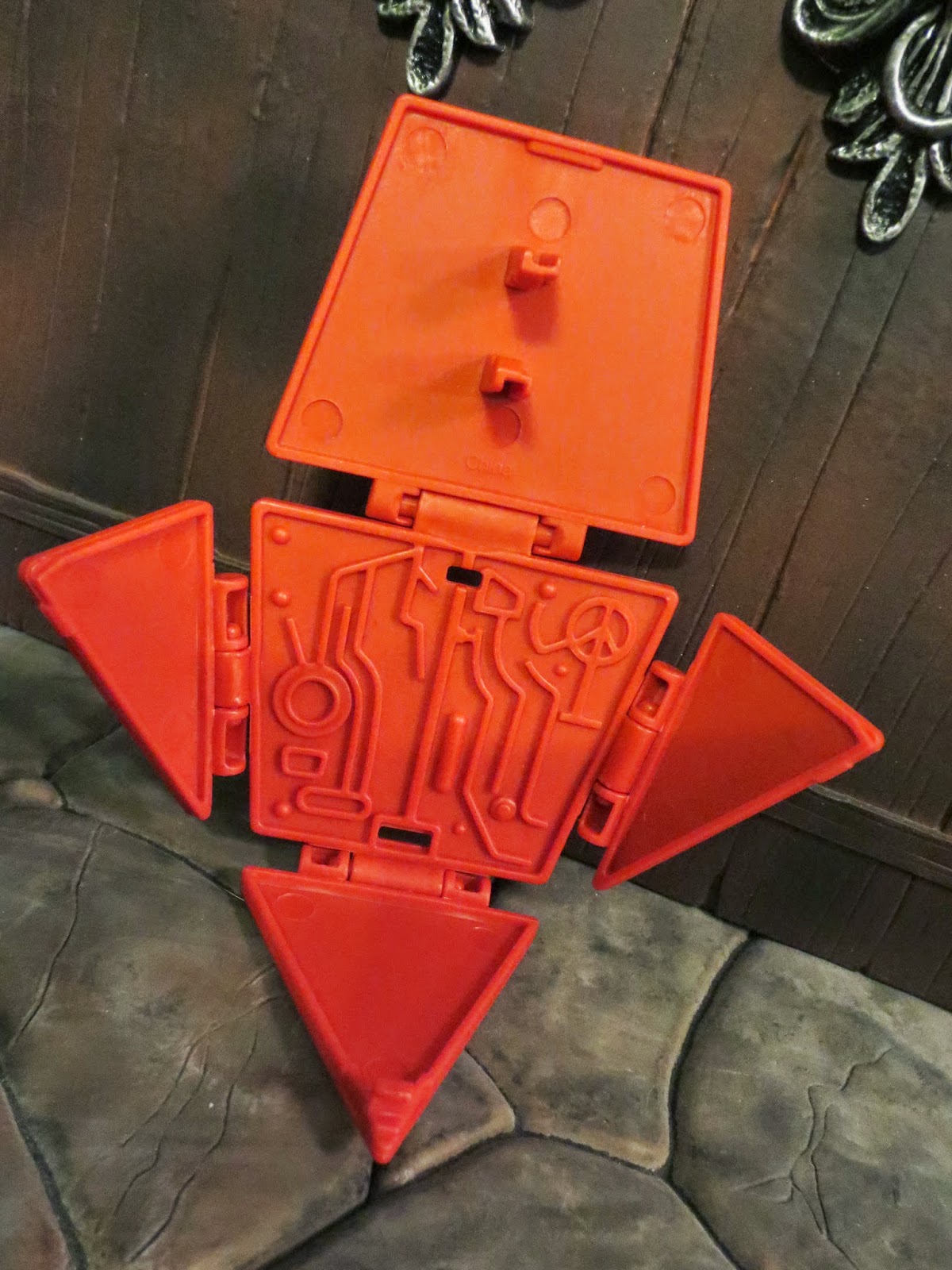 Extendar does have a very nice set of accessories that he can wield. In addition to his removable torso armor and six extension pieces, he features a recreation of his vintage folding shield and a newly created lance. The shield is made from a solid red plastic and folds apart in four places to create a much larger shield for the extended "Tower of Power." Rather than feature flexible plastic destined to show stress marks, Extendar's modern shield features actual hinges. This might be one of the best executed translations of a vintage accessory into the MOTUC format to date. 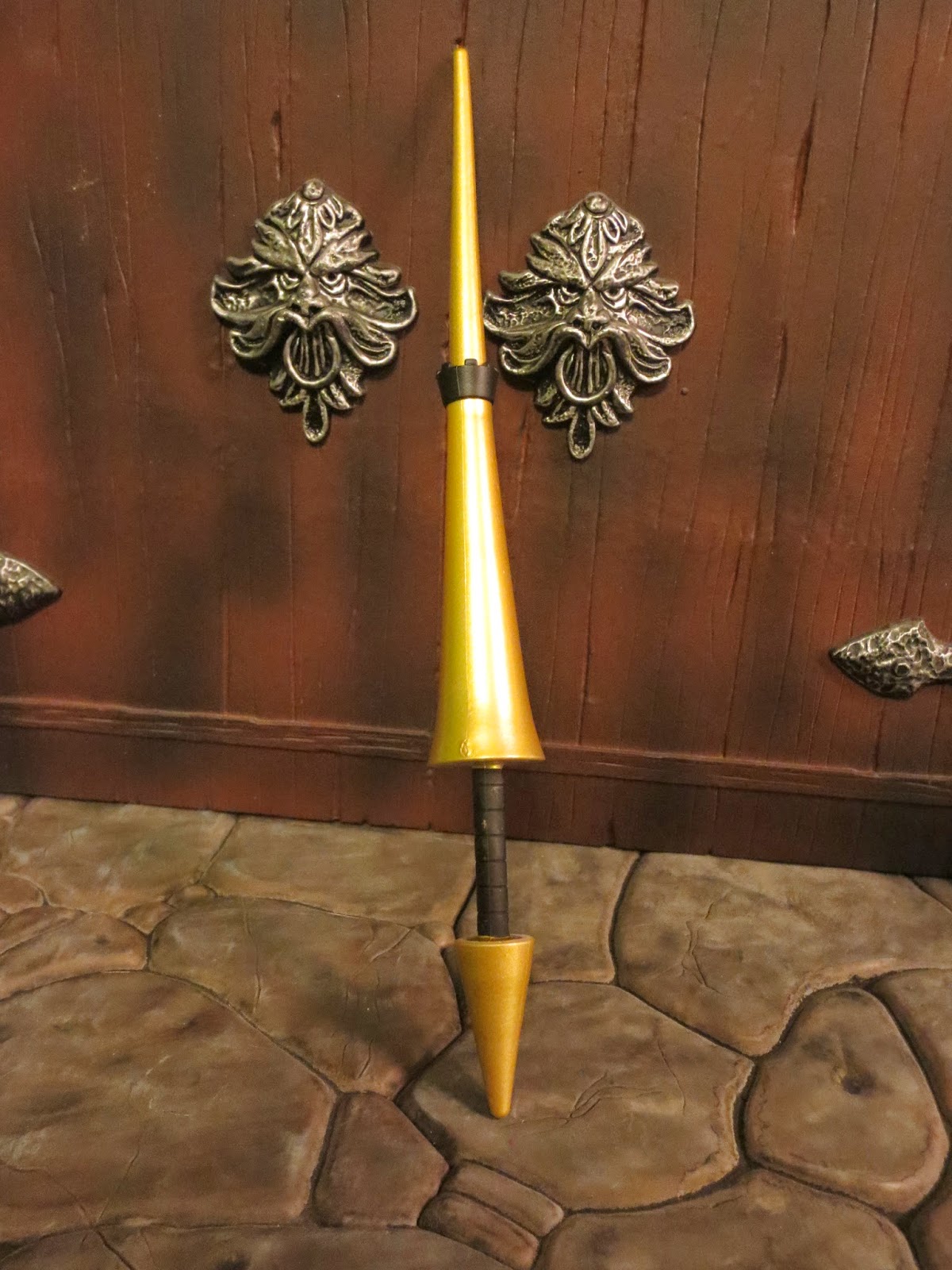 I like the lance even more, though. Giving Extendar a lance makes sense for the character conceptually since the weapon is both associated with knights and since it is known as a longer ranged melee weapon. The tip of the lance is made of a softer, more flexible plastic, but the rest of the weapon is solid and sturdy. It's really nice to finally have an offensive weapon for this guy! 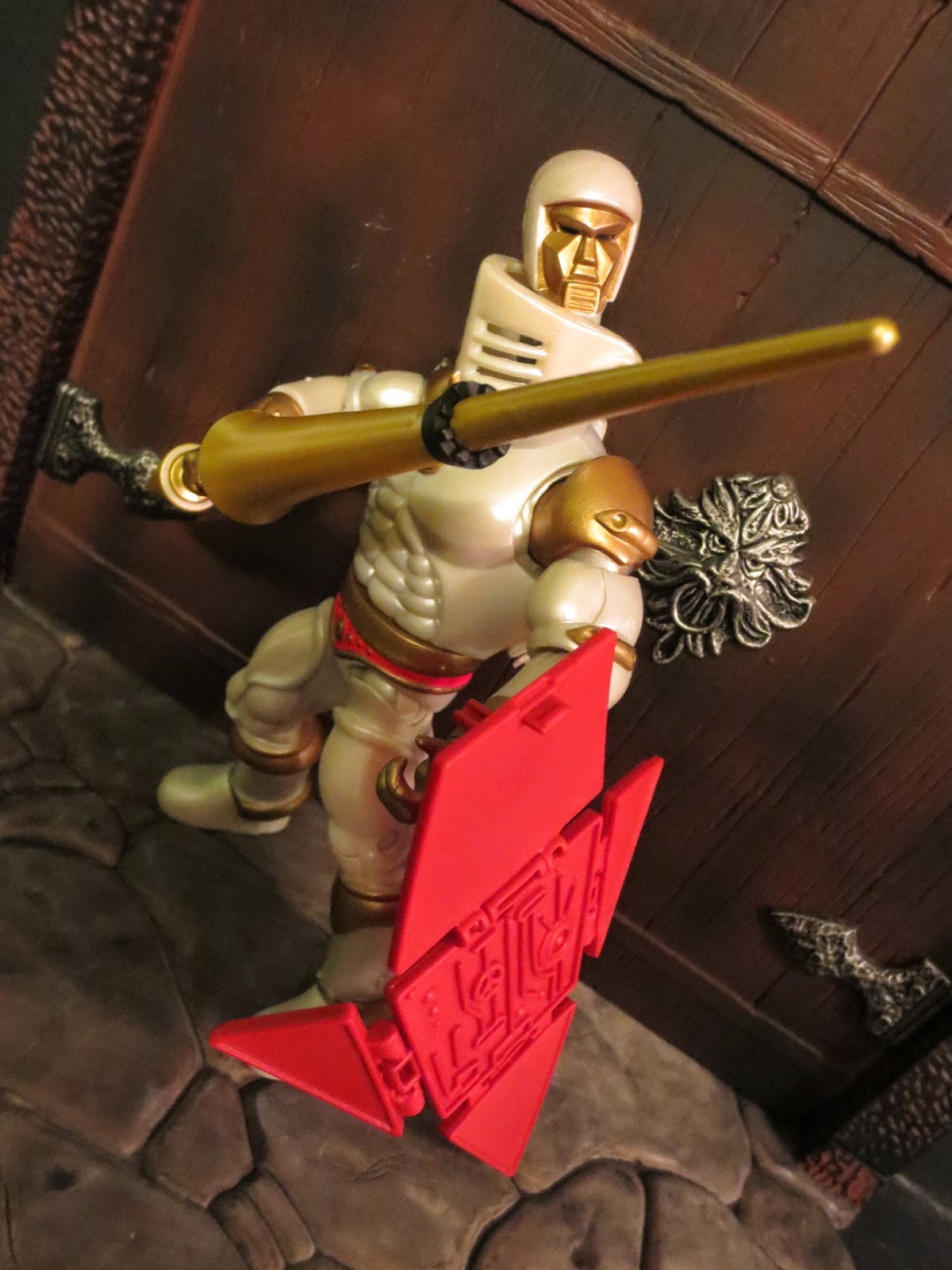 Overall, I really think Extendar is a fairly well executed figure as he does almost everything that I like to see on a recreation of a vintage MOTU figure: he features a near flawless recreation of the vintage figure's design, a way to replicate the character's vintage action feature that doesn't disturb the aesthetics or articulation of the Classics line, and he includes a new accessory or design element that furthers the concept. While his "extending" feature is not flawless due to the flawed mid-torso piece and some of the softer joints, overall I'm still rather happy with this toy. He's another welcome addition towards completing the vintage line who I'm happy to award a Great rating to; honestly, i think my biggest disappointment is simply that his armor just doesn't seem as shiny as it should be when compared to the original toy! 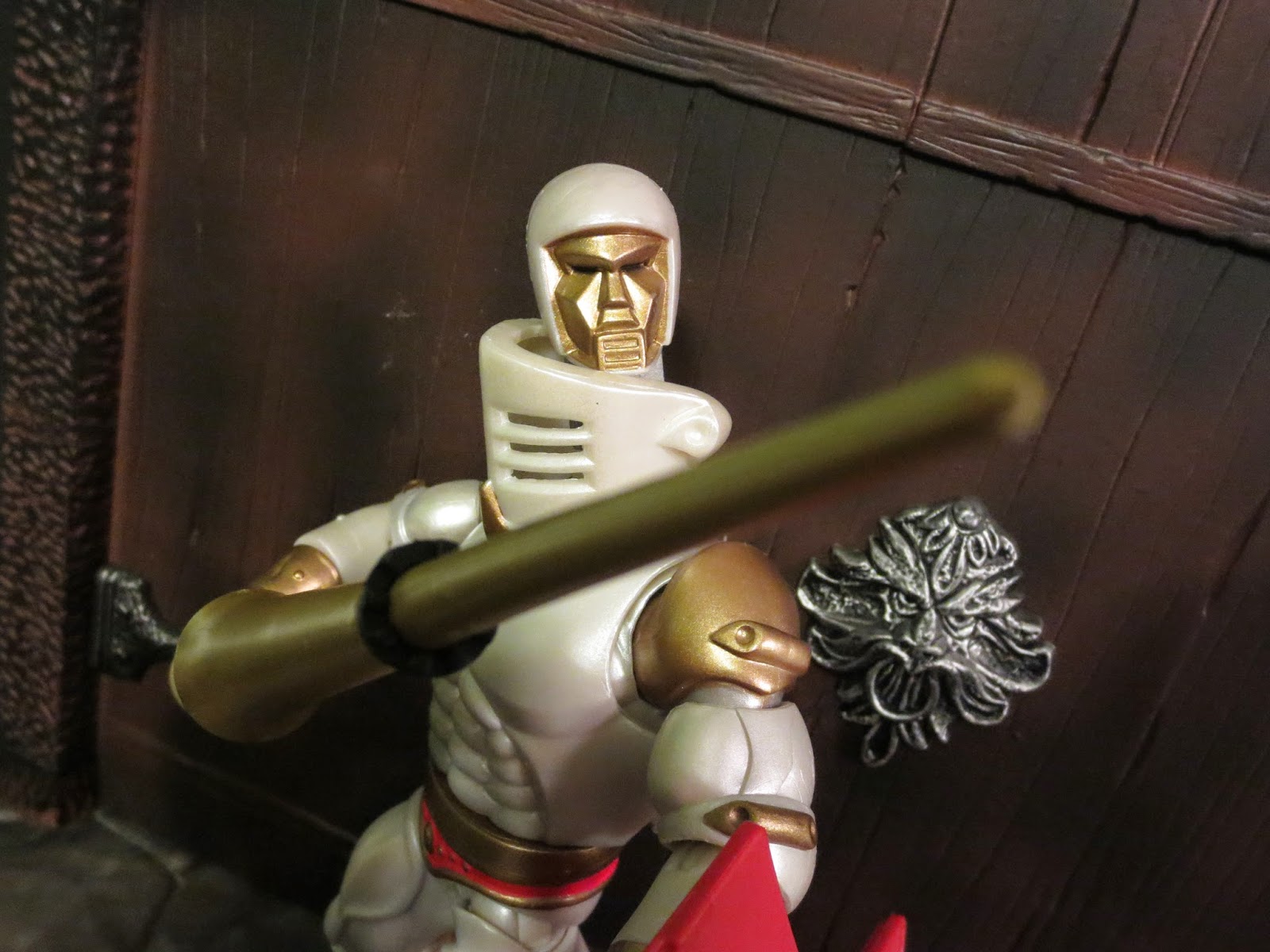 Interested in an Extendar of your own? You can order him right now from Big Bad Toy Store and work towards completing your vintage roster of the Heroic Warriors! Also, be sure to check out my other MOTUC reviews here on ThEpic Review: