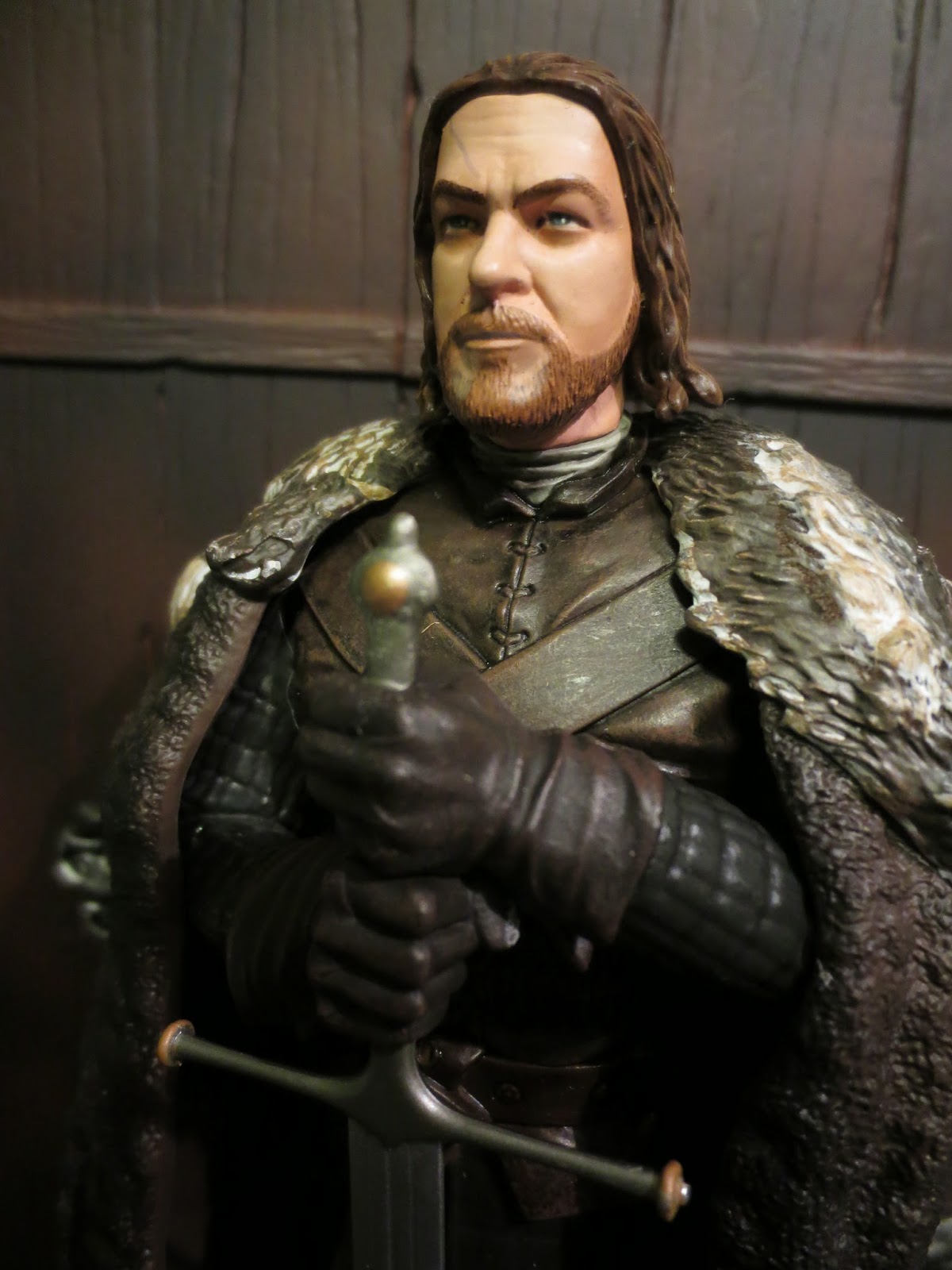 Eddard "Ned" Stark. Lord of Winterfell. Warden of the North. Hand of the King to Robert Baratheon. Collectible "staction" figure from Dark Horse Deluxe. While Tyrion Lannister is definitely the breakout star of HBO's Game of Thrones, Sean Bean's portrayal of Ned Stark provides the roots and perhaps one might say the moral center for the first season of the television series. I don't know what it is about Sean Bean, but the man just perfectly fits these types of roles. I find it interesting that Bean plays Ned Stark (he was the choice even before his audition), as when reading the first book in A Song of Ice and Fire I felt like his character fit the very traditional heroic fantasy archetype that would have felt at home in Tolkien's Middle Earth (Bean also played Boromir in The Lord of the Rings). His honor and nobility are nearly beyond reproach, so the removal of his character from the story seems to show a break from traditional fantasy archetypes, truly setting into motion the events that will shape Westeros. At ConCarolina 2014 this past weekend I had the privilege to attend as press a panel with George R. R. Martin. While the theme of the panel wasn't focused on Game of Thrones/ A Song of Ice and Fire, Martin did discuss how he saw his writing as differening from others in the fantasy genre as he stated he doesn't write "escapist or comfort" fantasy. As I've mentioned, I'm only in the second book in the series (and only four episodes into the series) but Martin's world seems to currently shirk many of the more traditional staples of the fantasy genre in not having such clear boundaries between good and evil. Much of that crumbles away with the passing of Lord Stark here, whom we'll get to reviewing now. After the break, of course...... 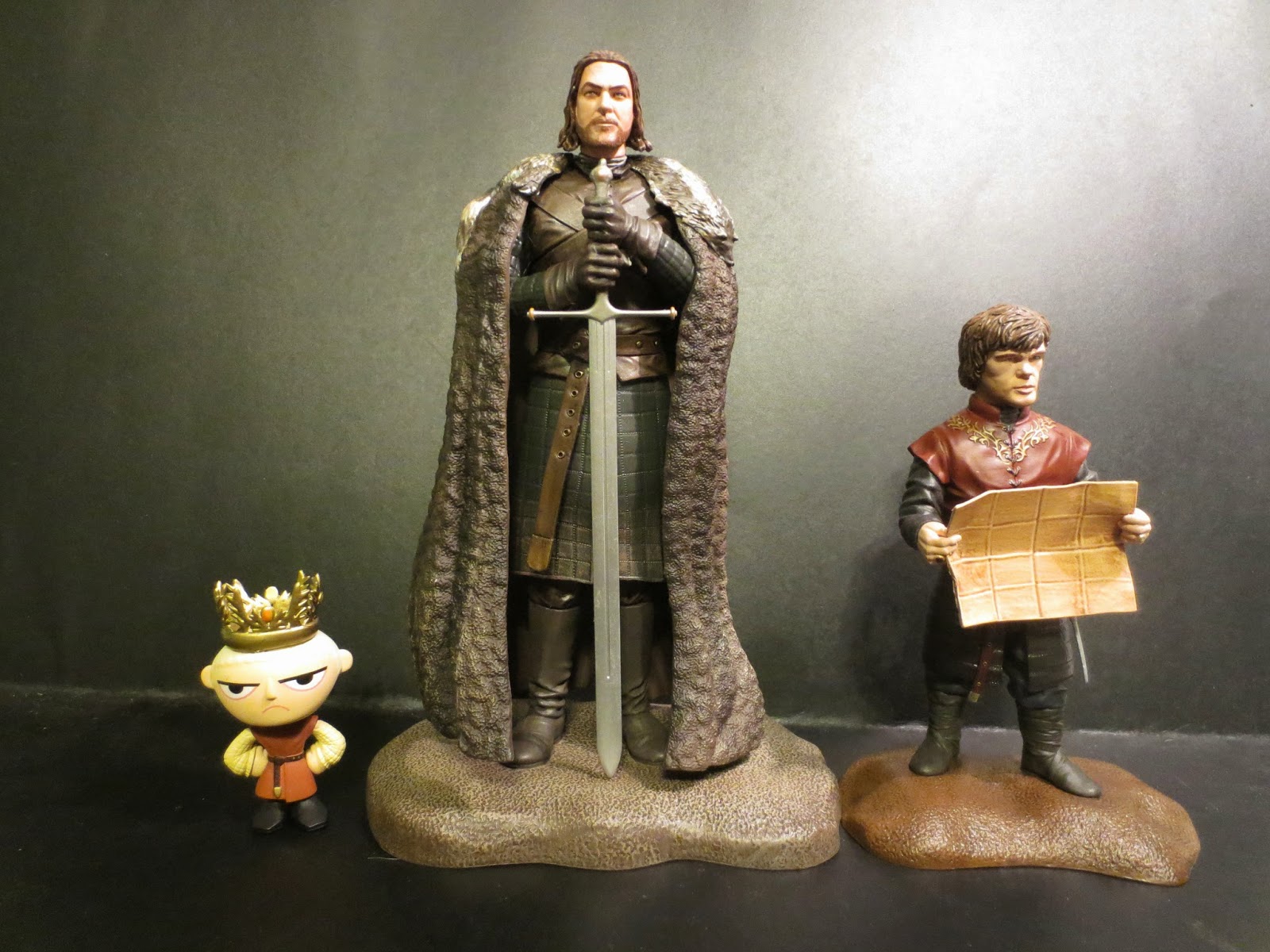 Fans of the television series Game of Thrones have a few options when it comes to collecting toys. FunKo has three toylines out (their standard Pop Vinyl figures, the Mystery Minis, and their
6 inch Legacy Collection action figures) while Dark Horse Deluxe offers larger scaled static action figures, which is what we're looking at today. Ned Stark has no articulation whatsoever nor is he removable from his base. He really and truly is a ministatue. Ned is standing straight and comes in around 8 inches himself (8 1/2 inches when you include the base) so that should give you a good idea of the scale of these figures. These figures are done in a very realistic style that captures the look of the television show nicely. Due to the size, however, there aren't many other lines these will display well alongside. 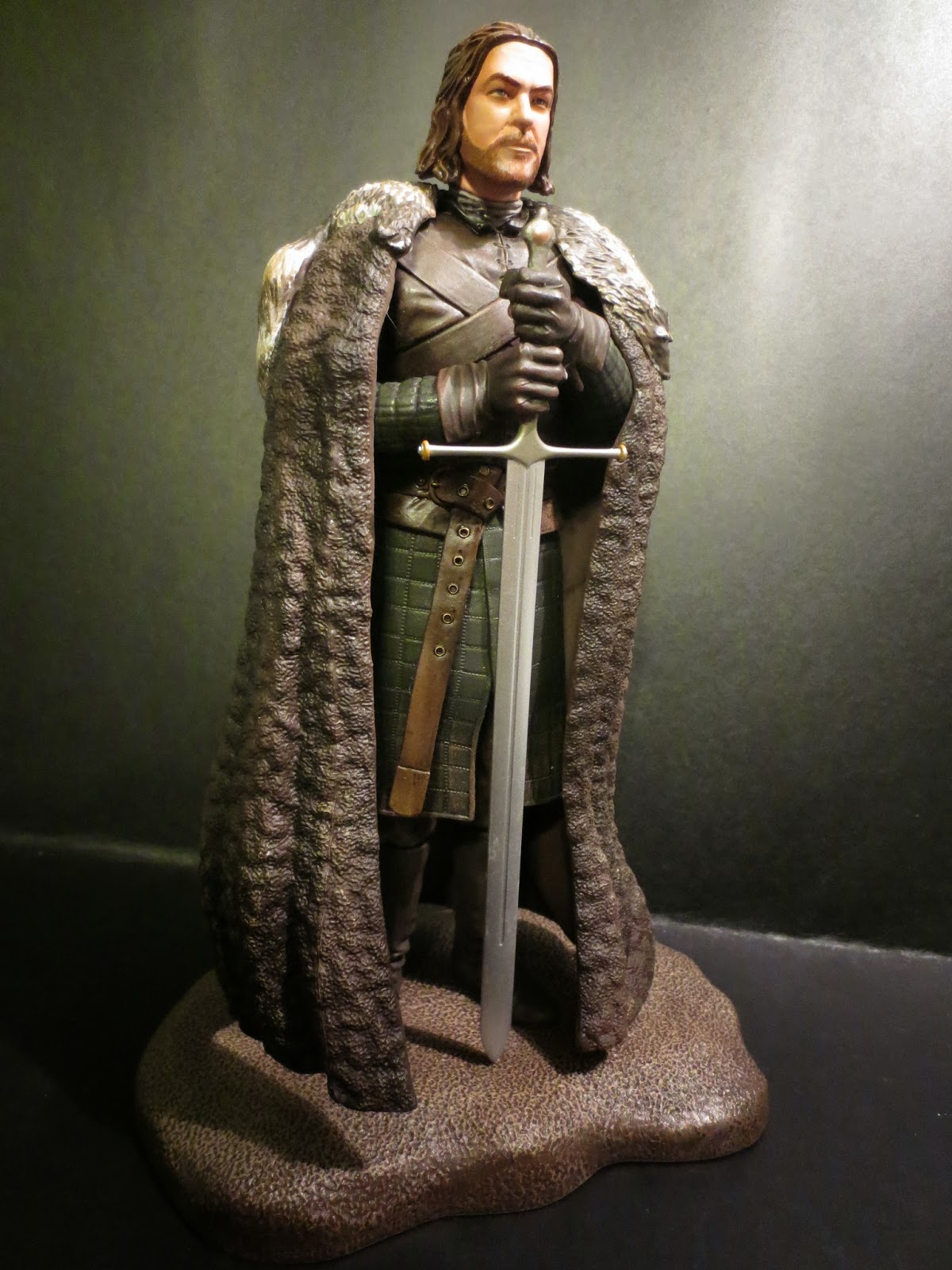 Since these have no articulation and are essentially ministatues, the pose chosen for the character is incredibly important. I think Dark Horse Deluxe did a nice job in selecting a pose for Ned that reflects a key element of the character: The pose is from the first episode right before Ned executes the deserter from the Night's Watch. While the scene is harsh and brutal, it does depict Ned's sense of honor and justice well. While Ned executes the traitor because it is the king's law, he also does it himself because he is the one passing the judgment as the lord of his land. Standing fully erect and holding the blade of Ice against the ground, you can see just how large the sword actually is when compared to a fairly normal sized man. 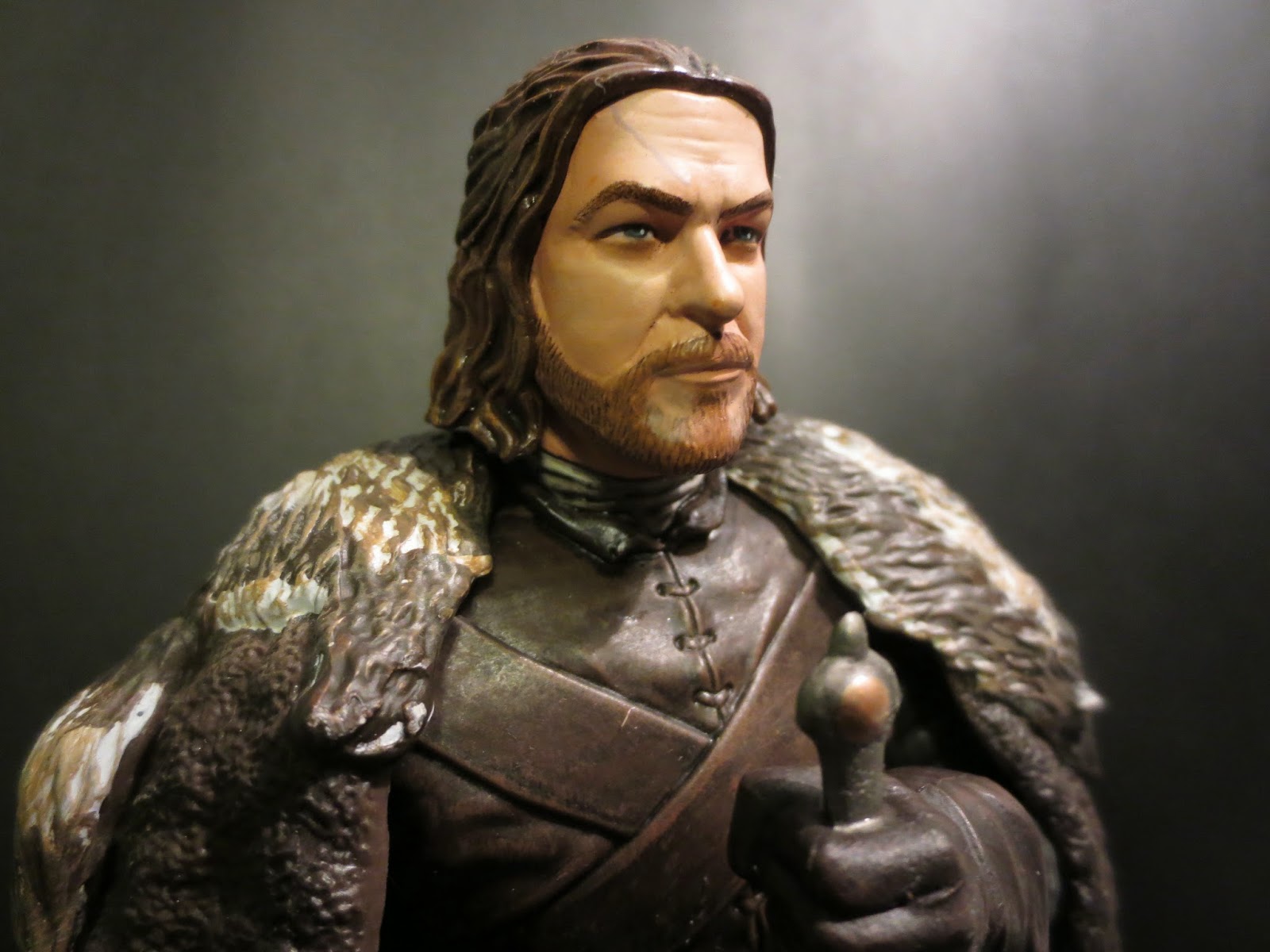 I think Ned might be the second strongest sculpt in this line so far (Khal Drogo is easily the best) as the likeness is quite uncanny. Other than something about the eyes, this seems like a super solid depiction of Sean Bean as Eddard Stark. The lines on the brow, the solemn expression, and the shape of the face really show that Dark Horse Deluxe is bringing their A game here. And that's just the headsculpt. The body is fantastic! Ned is wearing a very detailed, complex outfit that perfectly matches his outfit from the first episode of the show. The texture of the outfit almost looks to be quilted and you can actually see the little seams on each square of fabric. The massive cloak is made from a softer plastic that hangs realistically and looks like a realistic fur cloak. 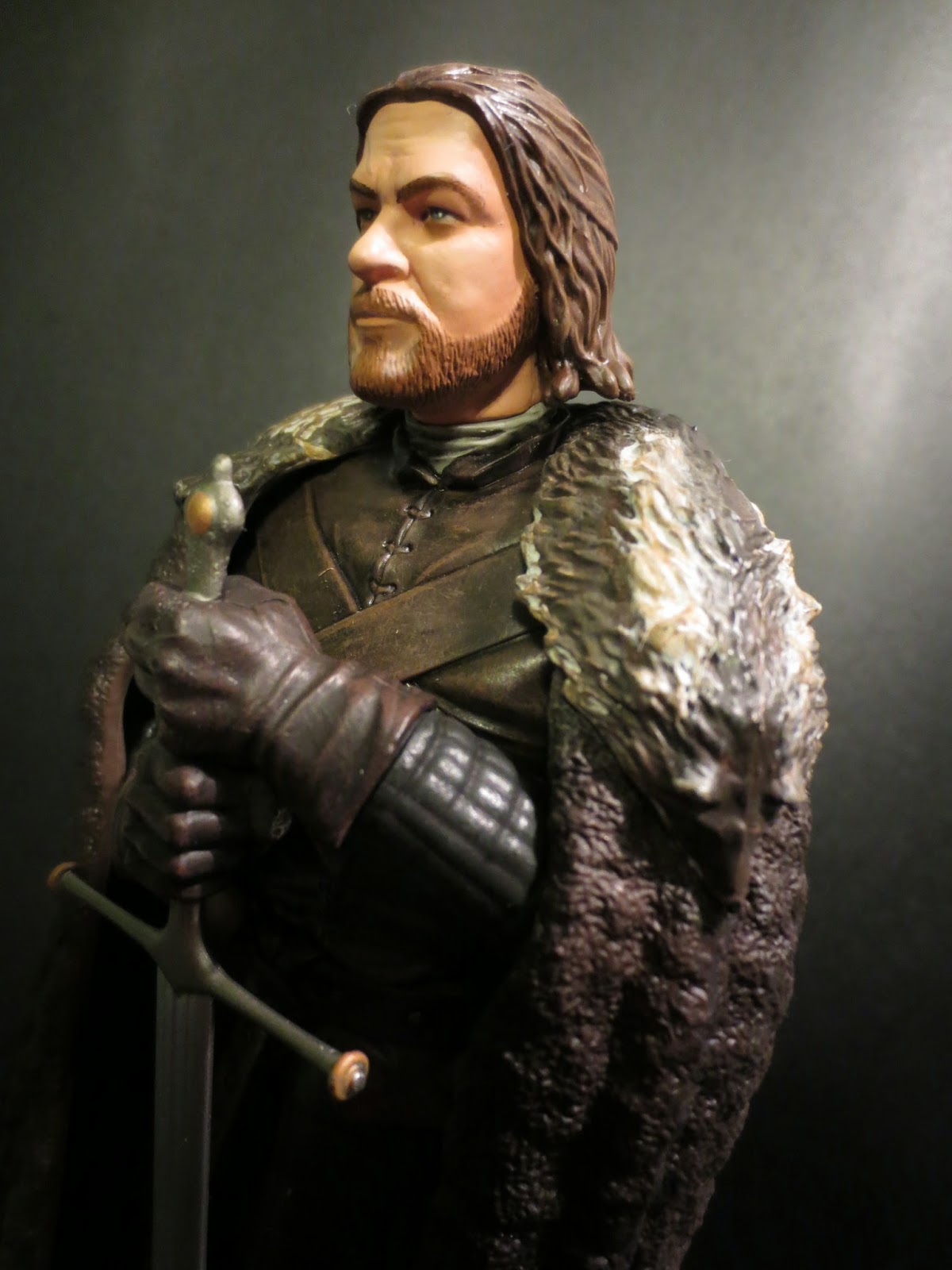 I have no problems with any of the paintwork on the outfit as everything is excellent. It might be tough to tell, but the various materials of Ned's outfit are many different subtle shades of brown and green. Lots of earth tones here. The face is also excellent. The eyes, skin, and scar over his right brow are all fantastic. The only complaint I have is with the color of the hair; it looks far too dark. Ned's hair is a bit lighter than it is portrayed here. It's not the end of the world, but it does standout a bit. You can see that Dark Horse Deluxe attempted a dry brush technique to lighten things up a but, but it just doesn't fully accomplish the task. Still, that's quite a minor flaw that might not bother other buyers.


While these are not articulated figures, a few of them do come with genuine accessories such as Daenerys' dragon eggs and Khal Drogo's arakh. Ned doesn't come with an actual accessory per say, but he does come with the blade of his Valyrian steel great sword Ice. To help keep the somewhat fragile piece from being damaged in transit, Dark Horse Deluxe packaged the blade as a separate piece. Be very careful attaching the peg of Ice into Ned's hands as trying to force it might cause it to break; perhaps use a hairdryer to soften Ned's grip just a bit before inserting the blade into his grip. The sword does look great in Ned's hands, however, and the blade has a fairly nice paint job. 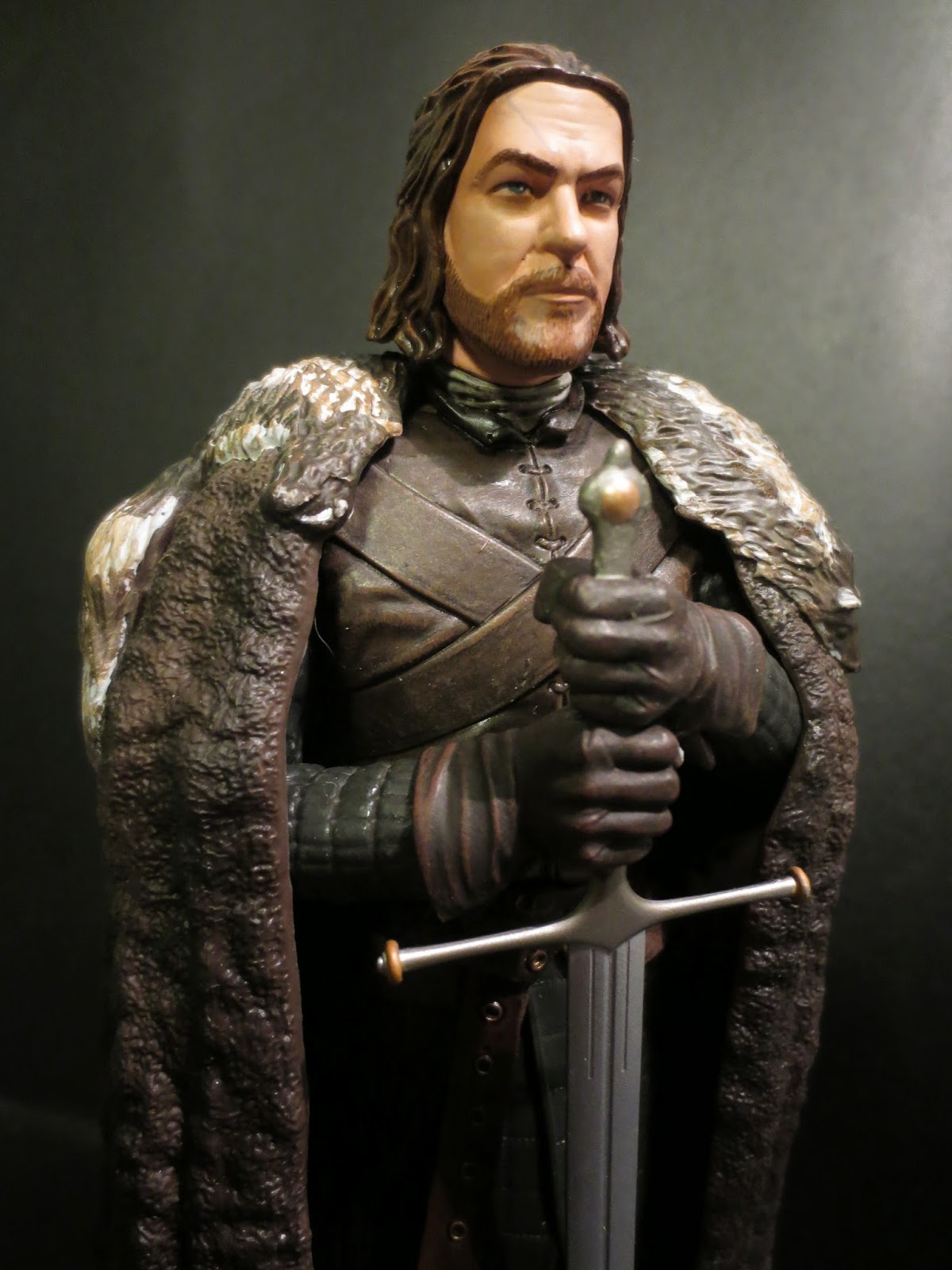 As I mentioned in my review of Tyrion Lannister, while I typically prefer my action figures to be somewhat articulated, I really do like what Dark Horse Direct has offered. They're not fragile like statues yet they have a similar level of quality and paint work to them. I think Ned is easily the second best figure in the line (after Drogo) and is really a rather impressive collectible. The sculpt is excellent, the paint work quite elaborate, and the figure has an excellent pose that does capture a memorable moment from the television series. The only real complaint I have about these figures is that the bases are all a bit bland. If you're going to put your figures on a base, do that base up right, you know? If you're looking for an action figure this isn't the choice for you, but if you simply want a high quality, low cost collectible for your shelf, Lord Eddard Stark here will not disappoint. I'm giving him a Great and a 1/2 as he really is a rather nice display piece available for under $25.  Dark Horse Direct has five more figures releasing this summer (Jamie Lannister, Cersei Lannister, Arya Stark, Rob Stark, and a White Walker) and another wave yet to be unveiled that should hit this winter, and I'm excited to add these to the collection. I imagine they'll look great as a set.


If you're interested in a Ned Stark to adorn your own great hall or solar, check out Big Bad Toy Store and Entertainment Earth. Also, check out our review of Tyrion Lannister.