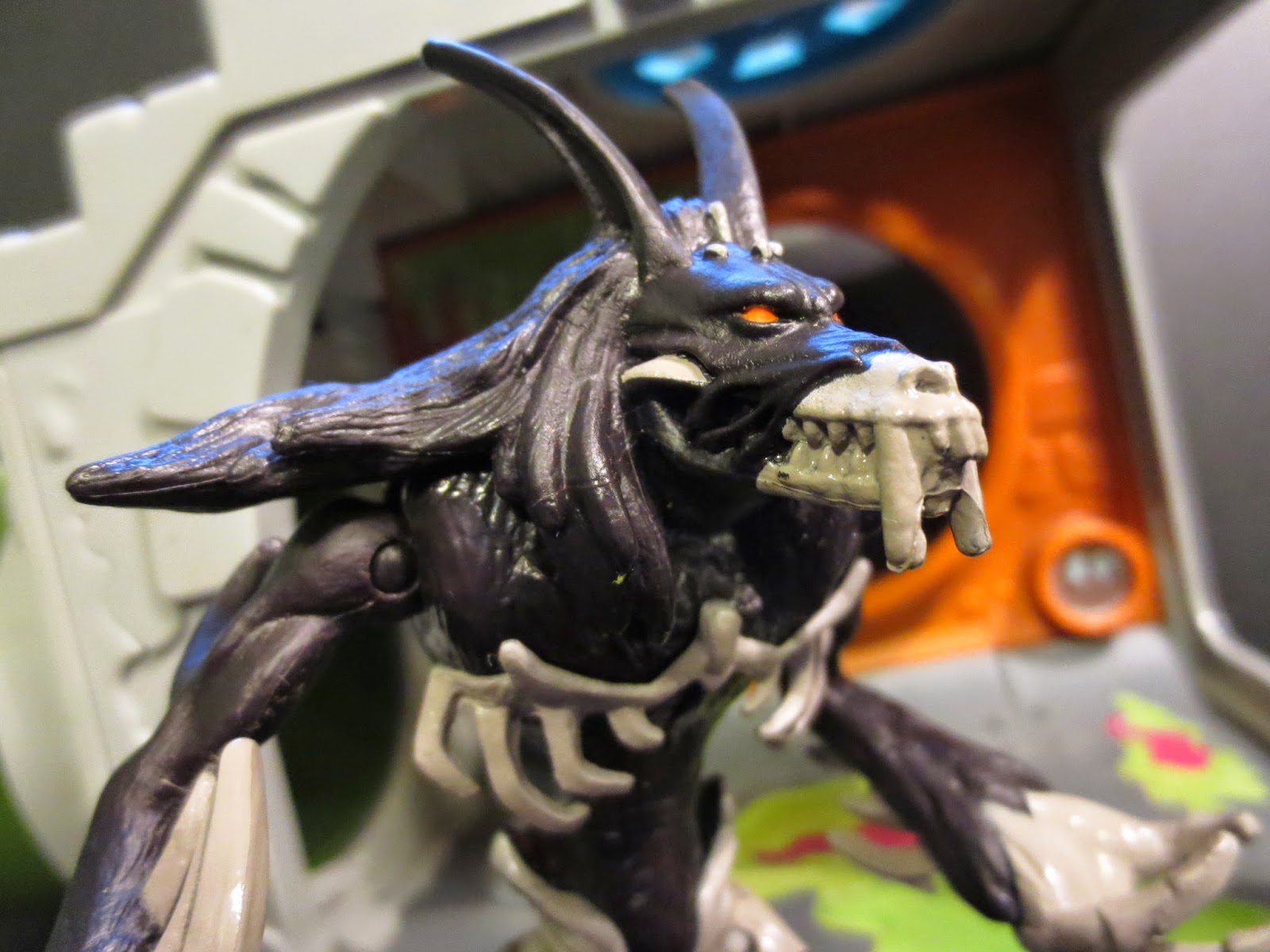 I still remember when Rahzar first appeared alongside of Tokka in Teenage Mutant Ninja Turtles 2: The Secret of the Ooze. On one hand, I was really excited because other then the turtles themselves we did not see any crazy mutant characters in the original film. On the other hand, to my seven year old self it seemed rather strange to invent two new characters when not only was the toyline and cartoon filled with excellent mutant villains, but the films had yet to introduce Bebop and Rocksteady. That's movie logic for you, though, and of course over time I've come to love Rahzar (who was voiced by master voice actor Frank Welker and played by Mark Ginther). Rahzar has been introduced into Nickelodeon's new TMNT cartoon series and toyline interestingly enough as a further mutation of Chris Bradford, the Chuck Norris look alike (voiced by Clancy Brown) who was secretly a member of the Foot Clan. Bradford was initially mutated into a large mutant dog named Dogpound, but a second mutation made him fiercer and faster, now being dubbed Rahzar! Ready for a look at this big bad wolf? Then join me after the break... 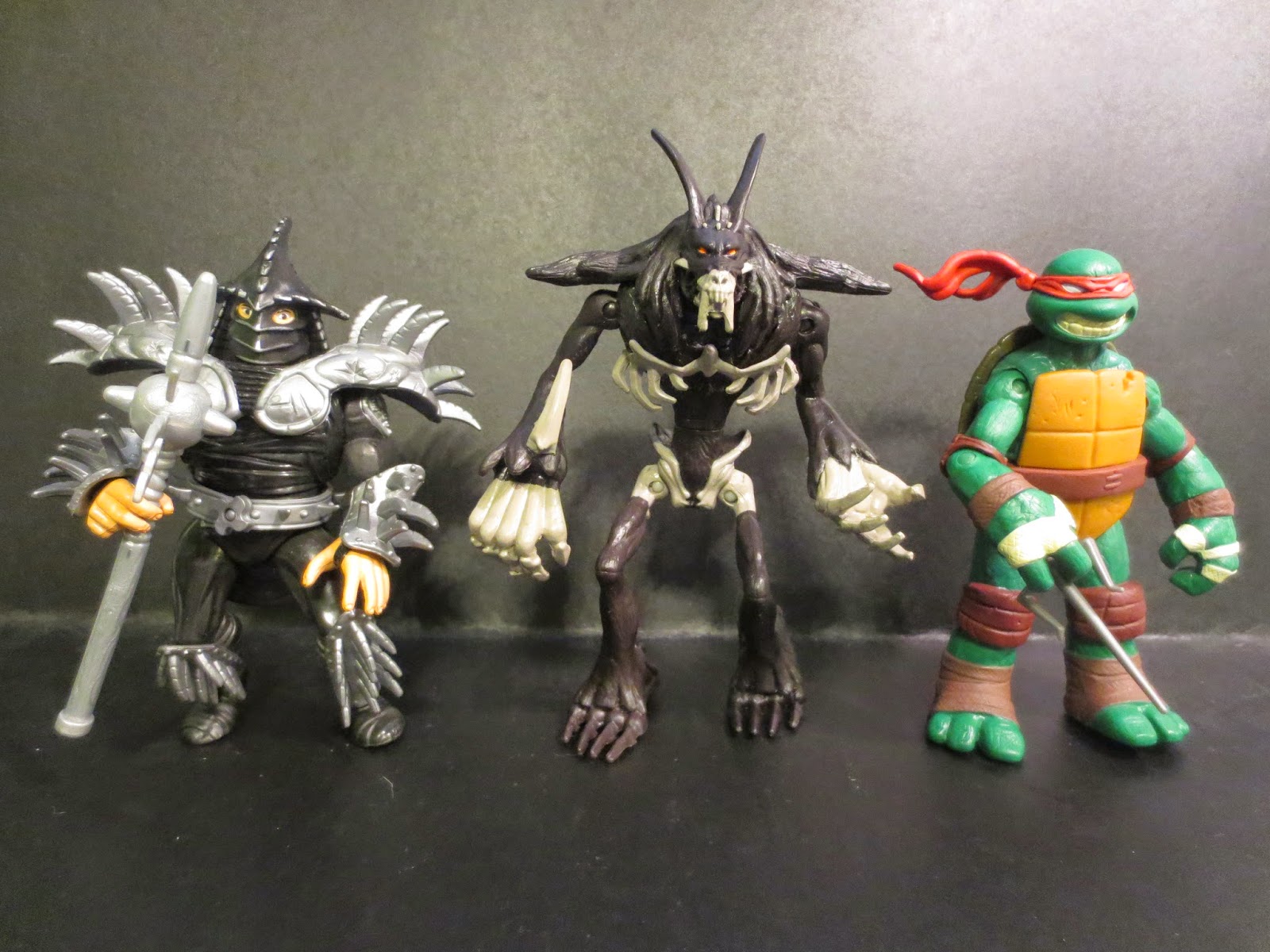 Rahzar stands about 5 inches tall (he's 5 3/4  if you factor in his pointy ears), although he is standing in a bit of a crouch. Remember, Playmates doesn't pay a lot of attention to scale in this line, so you'll just have to make do. He's a bit more wicked looking than many of his fellow mutants in the line but still has some of the same cartoonish aesthetic as most of the other figures. 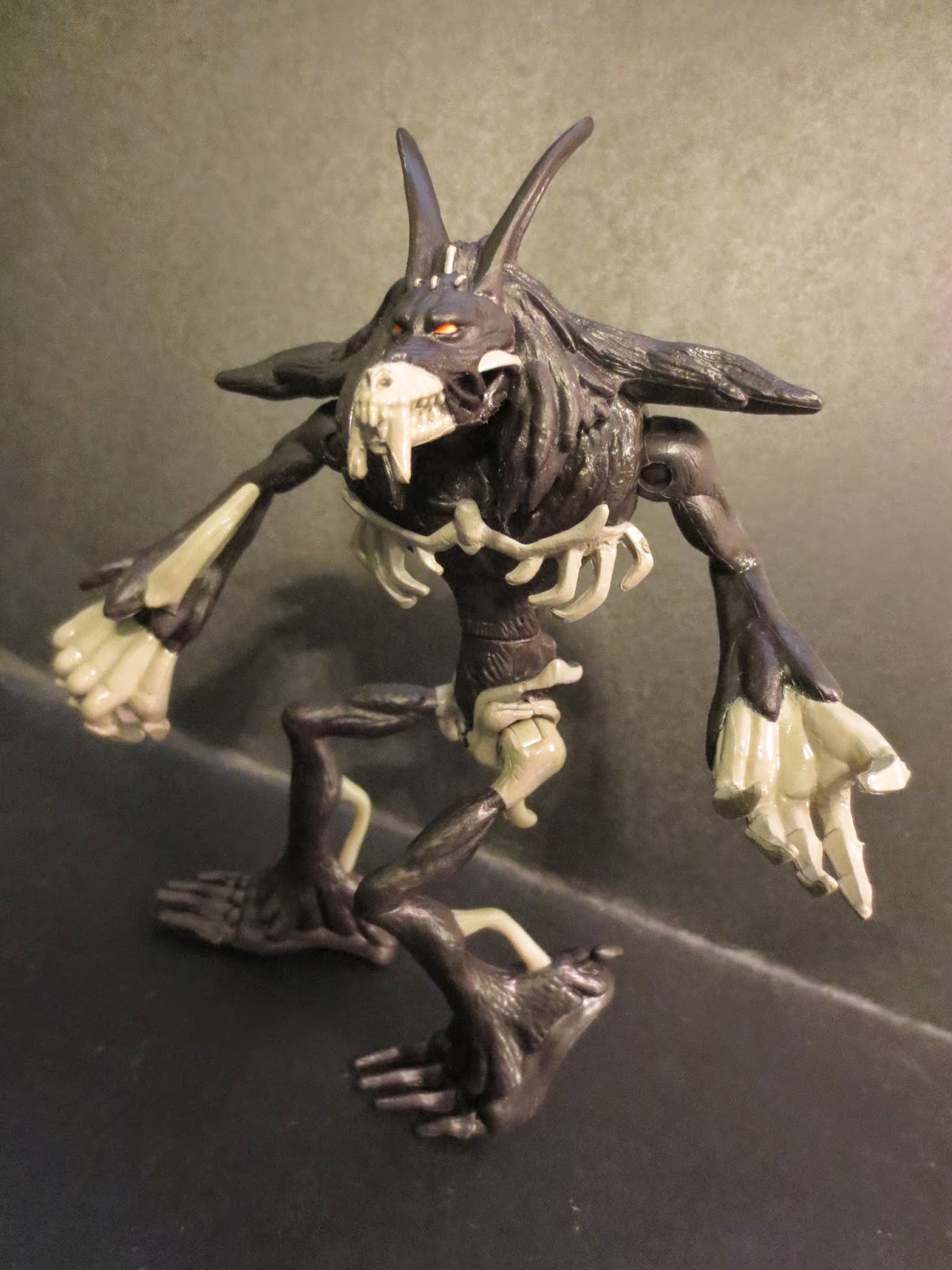 Rahzar has fairly minimal articulation: swivel/hinge hips, a swivel waist, and swivel hinge shoulders. Everything seems very sturdy, although Rahzar's hips are a bit loose and he can be slightly difficult to stand up. I really, really wish he had some sort of swivel joints on his wrists to help give him some better fighting poses. His unique head doesn't seem too well suited for articulation, but surely this guy would have been a star candidate for a hinged jaw, right? Even Mutagen Man, Splinter, and Kirby Bat have more articulation than this guy! Yikes! 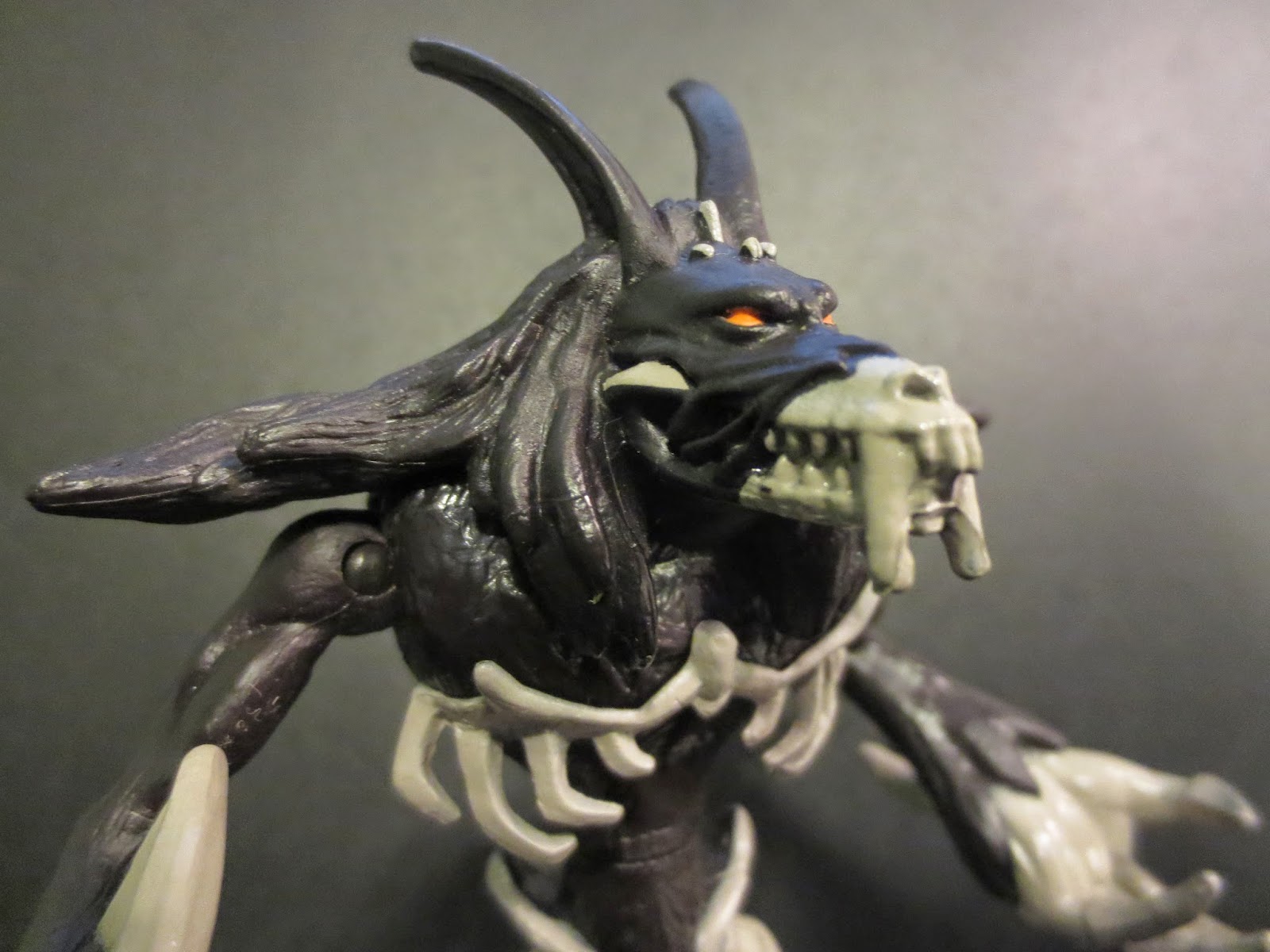 As with most of the TMNT figures, the sculpt is good. Yes, it's very "toyish" but I really think that's part of this line's appeal. When I review these, I really try to review them from the perspective of someone wanting to have some simple fun and playing with the toy rather than with the fine toothed comb of a collector. Rahzar has a cool werewolf vibe going on that kind of reminds me of the movie Dog Soldiers for some reason. He's got some interesting exosekeleton like growths coming from his body such as spikes on his back, forearms, and chest, and very lupine like legs with bizarre connecting tendons. His jaws are super creepy as it looks like they are protruding from the skin on his face. Perhaps he has really bad gingivitis? 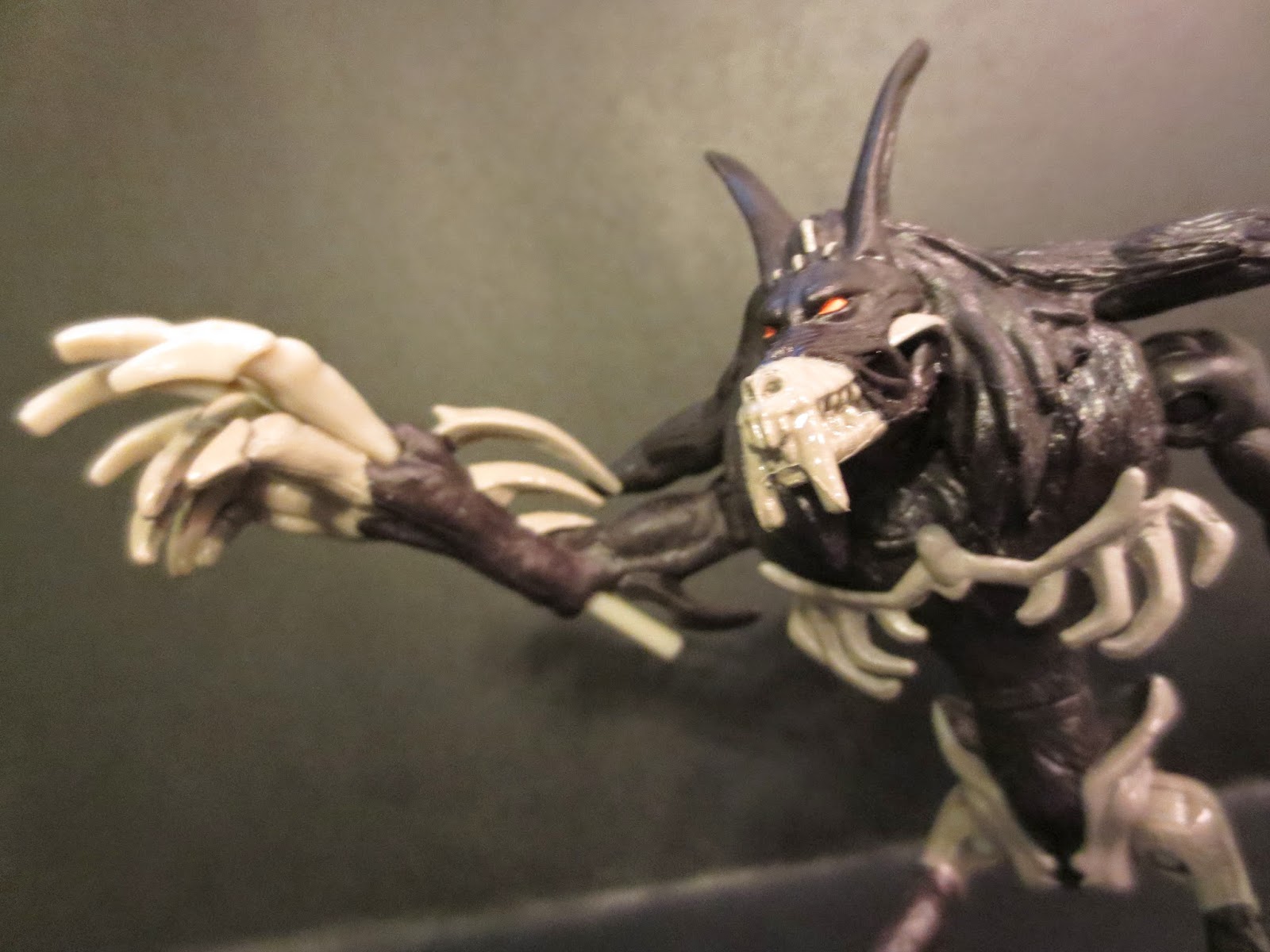 Rahzar's molded in a black plastic that for some reason looks slightly brownish to me in the right lighting conditions. I've shown the figure to other people, though, and have been told the figure is black. I think he's black like 90% of the time, but the other 10% of the time I think he's brown. Don't ask me why. He's pretty simple as the only painted elements are his gray claws, pelvis, jaw, and forearms, and his red eyes. It's simple, but I don't me feel like anything crucial is left unpainted as on other figures like Slash, Rat King, and Casey Jones. 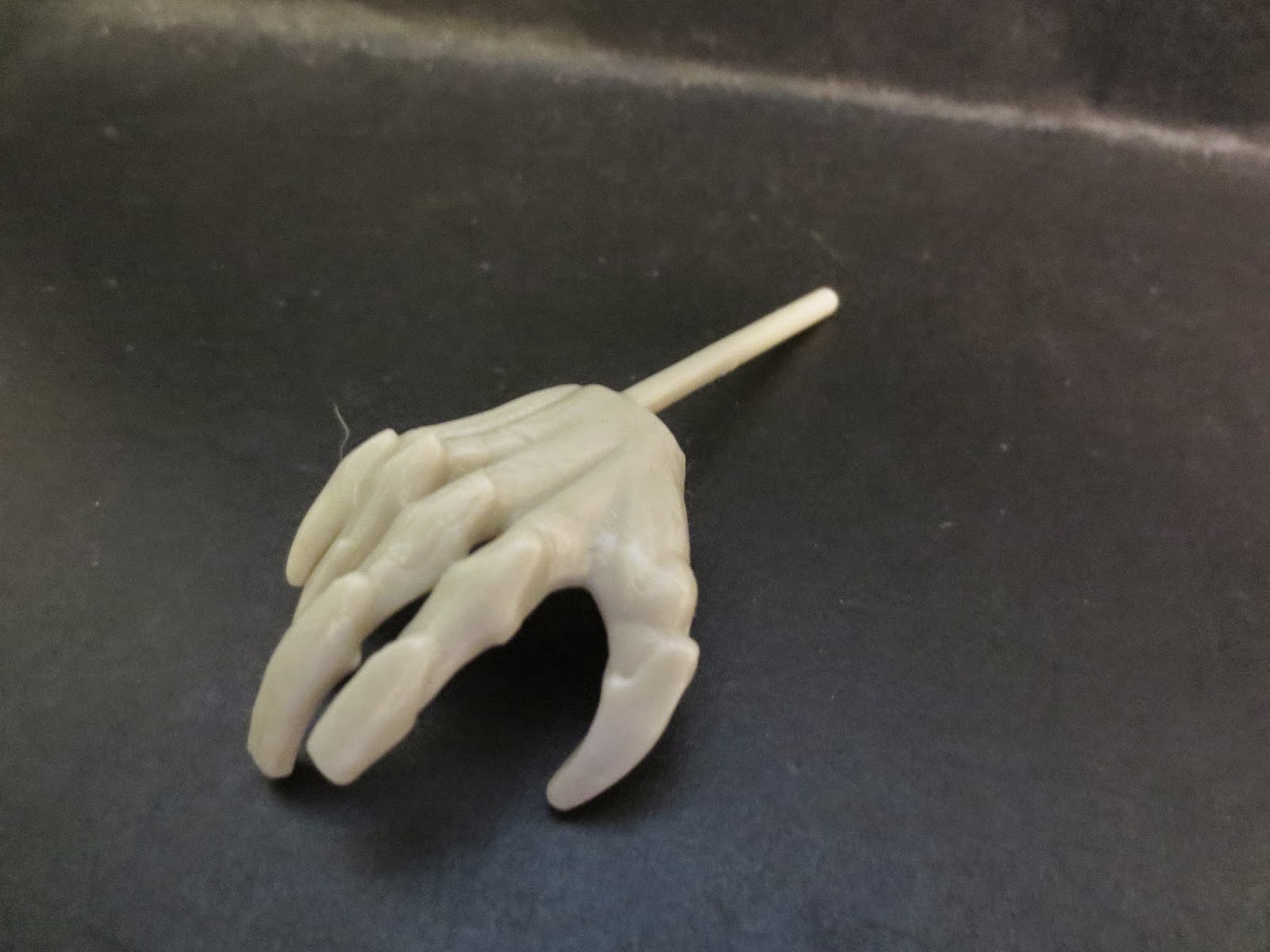 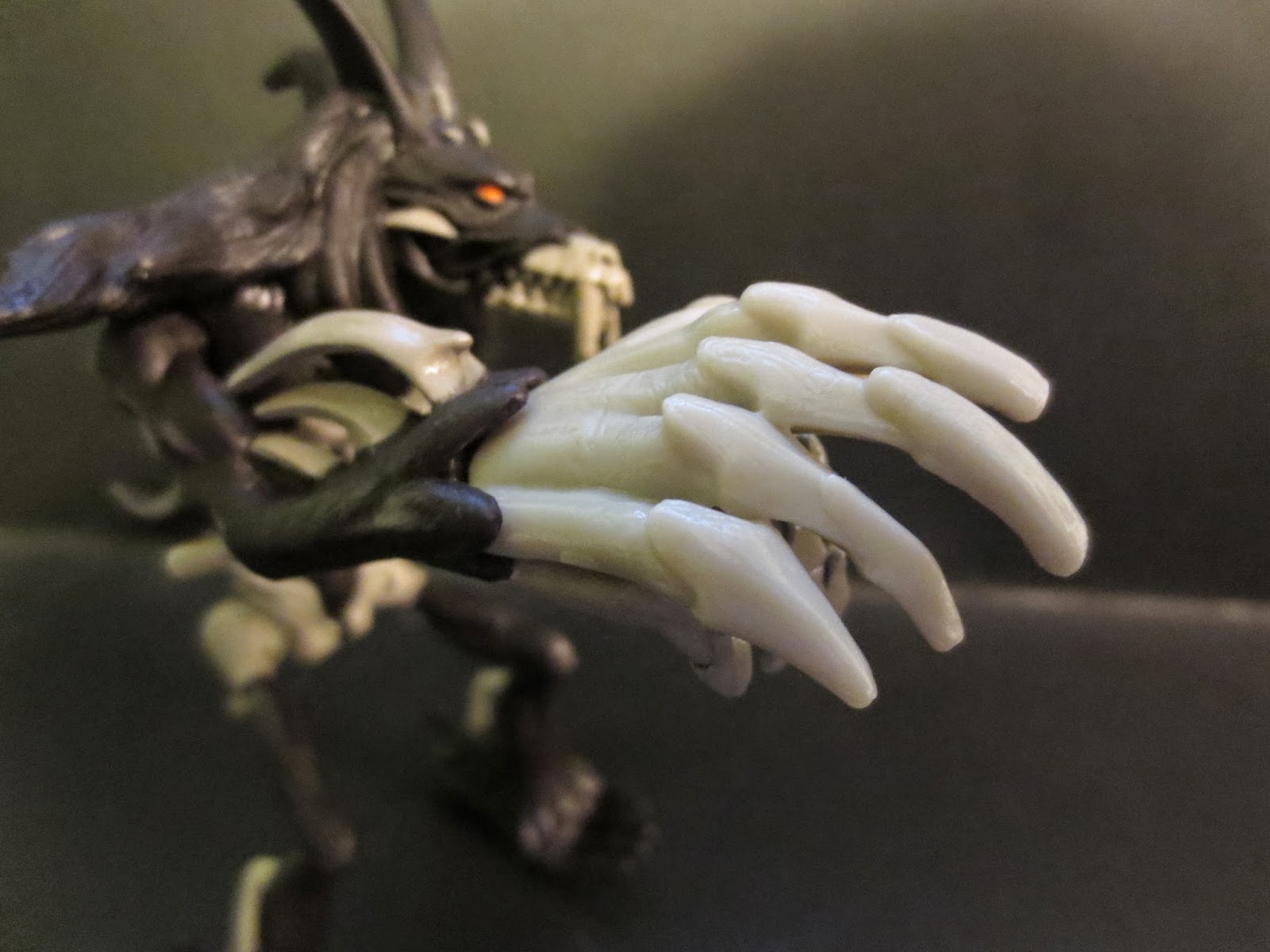 Rahzar comes with one accessory, but it's tied into his action feature. He comes with a removable claw "projectile" that you can flick fire from his right hand. He already has his bony regular claws, so this seems to be like an extra claw growth or something. The piece is a simple sculpted claw on a stick molded in a light grey plastic. I'm not sure why Rahzar can shoot his claws (I haven't gotten this far in the cartoon yet) but it's an OK feature. I wish the claw stayed in better when posing him, however. It just slips out when his arm is resting with the claw facing the ground. 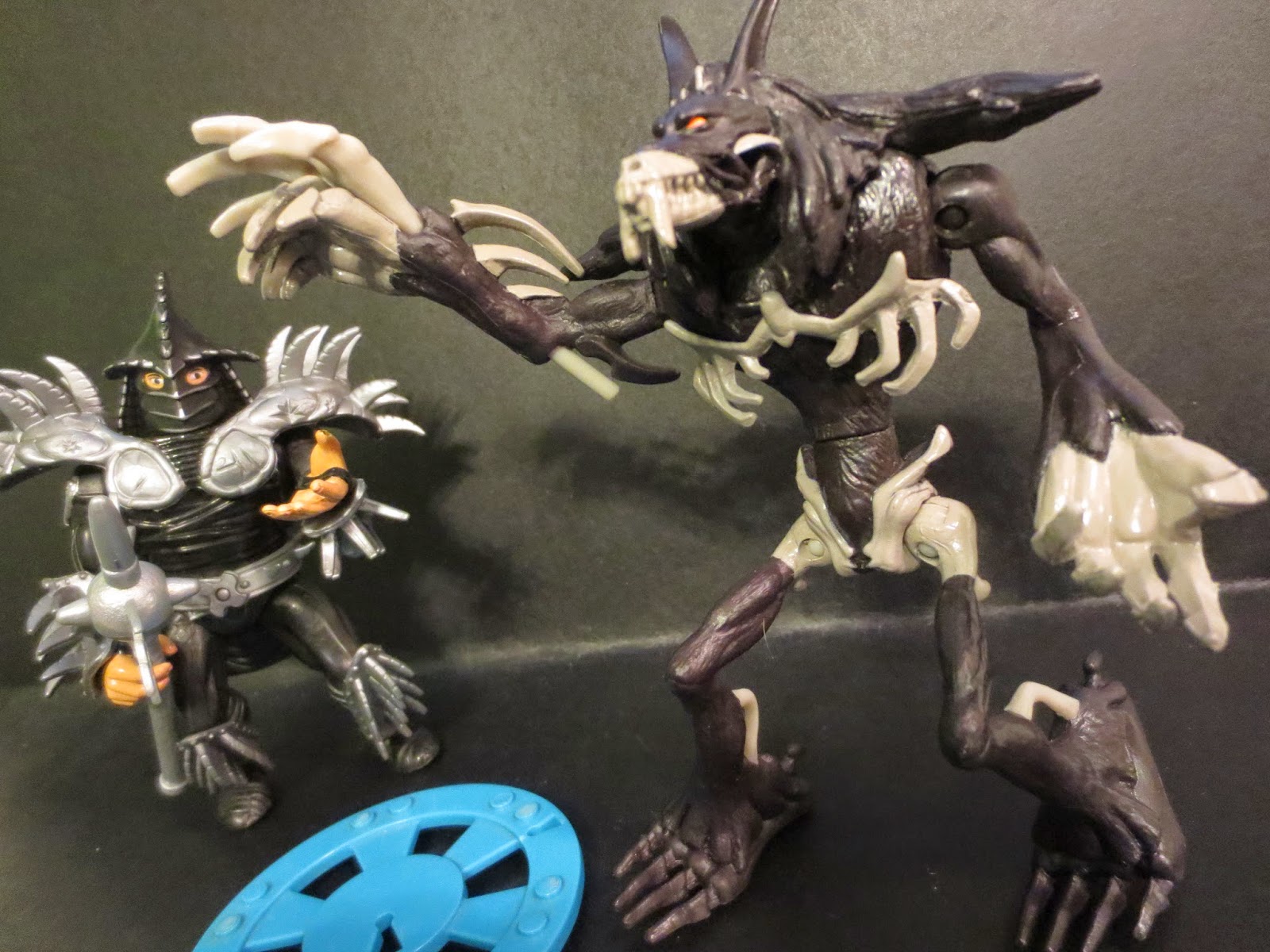 Rahzar is really a fun toy. Who doesn't love a mutant werewolf who can fire his claws at people? Once again, these are not high end collector's items; they're simple toys designed with kids in mind first. I personally find it refreshing to collect a line like this that just simply is what it is. That doesn't mean I don't let myself have complaints, though. I really think Rahzar would have been a lot more fun if his wrists could swivel. I know that would have interfered with his flick fire right claw, but something surely could have been worked out. He's a great villain for the turtles and hopefully one day we'll able to display him next to a new interpretation of Tokka so they can wreak havoc all over again. Ultimately, I'm giving Rahzar a Good and a half. He's a really fun toy. He's not perfect and could have been greatly improved with even a swivel wrist on his left hand, but I'm definitely glad I found him so easily. 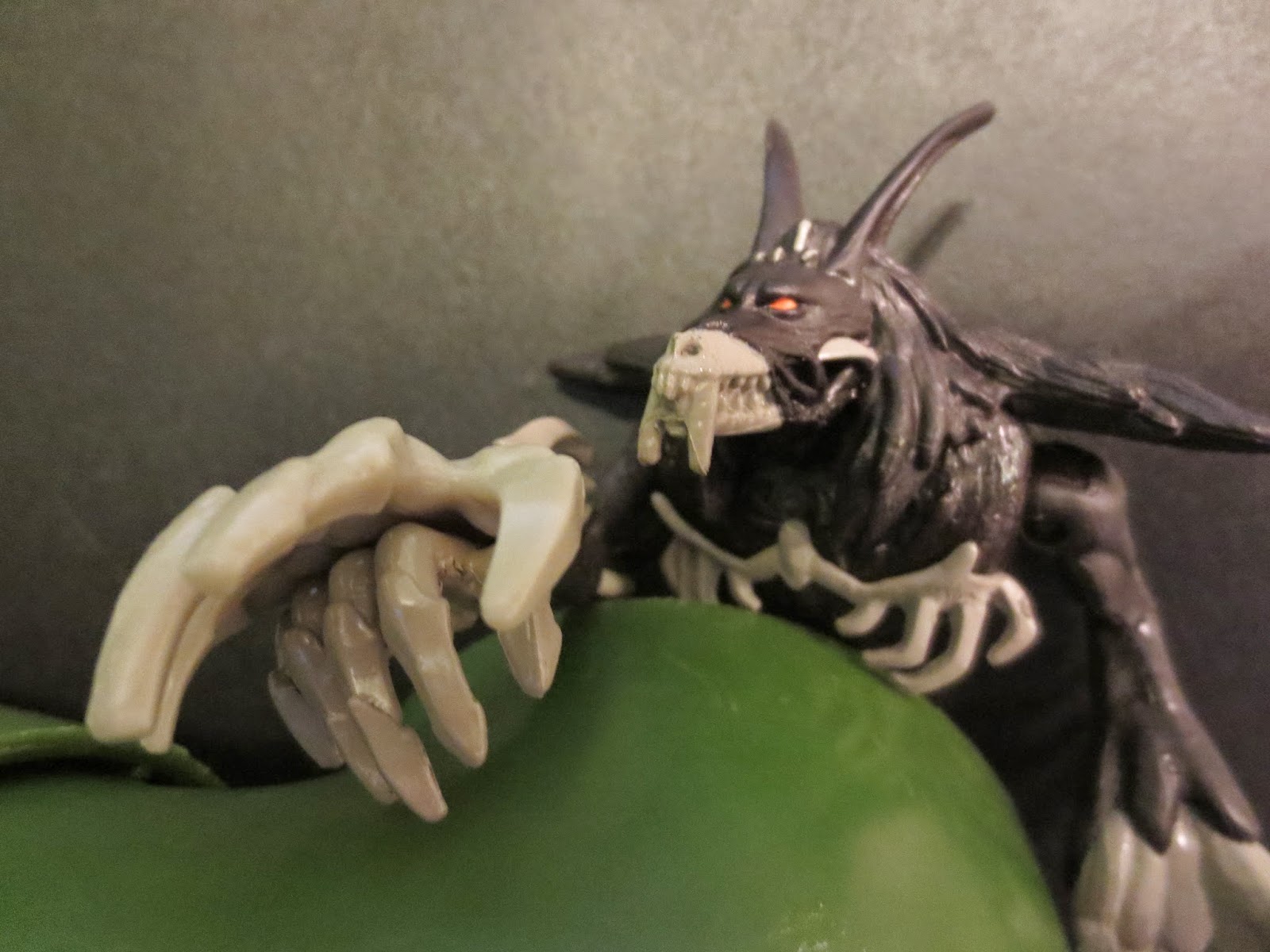 If you're into Teenage Mutant Ninja Turtles, check out some of my other TMNT reviews here at The Epic Review: