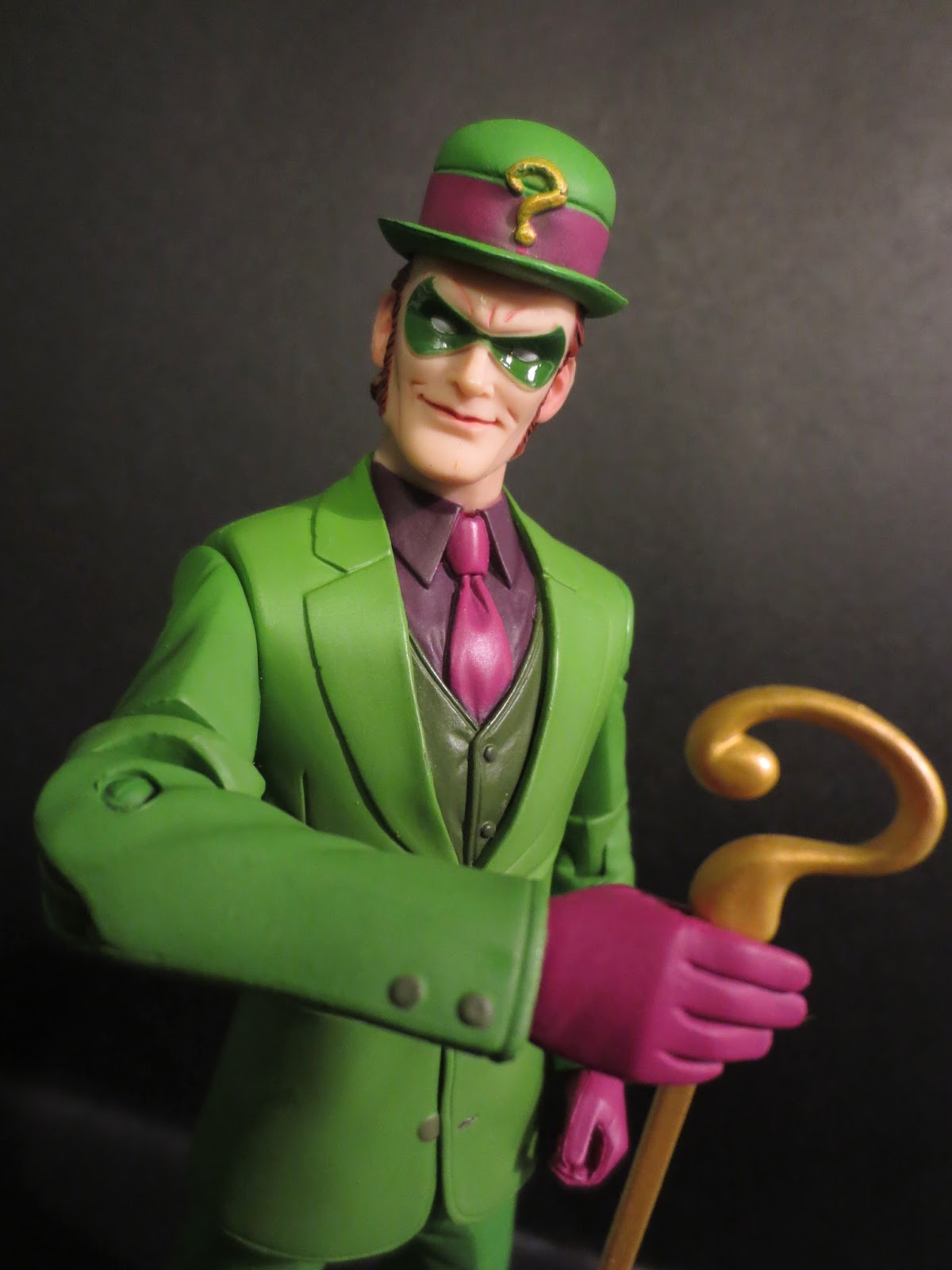 While Mattel just re-upped their licensing deal with Warner Brothers to continue making DC Comics based toys, that news doesn't seem to matter much for many fans. The slow death of the much loved DC Universe Classics line and all of its spin off lines has definitely hurt the interest of most adult collectors and it doesn't even seen that Mattel is interested in offering any product to really appeal to that demographic. Fortunately, where Mattel has faltered DC Collectibles is picking up the slack; we are getting some of the best looking Batman and DC Universe based figures ever coming out this year, with a roster that includes characters like Power Girl, Jason Todd as the Red Hood, Arsenal, a Talon, Batgirl, Batman: The Animated Series figures, and today's review, the Riddler. Based on his appearance in more recent issues of the New 52's excellent Batman series which features the artwork of Greg Capullo, this version of the Riddler is a great modern interpretation of one of Batman's oldest foes (he first appeared in Detective Comics #140 in 1948!). Ready for a look at the Riddler? Then join me after the break....


Obviously one of the major selling points of this series is that these action figures are designed to replicate Greg Capullo’s fantastic art and character designs for the New 52 Batman series, and I’m happy to say that DC Collectibles has succeeded in capturing Capullo’s style. I’m also really happy to say that Capullo’s style really translates well to the medium, creating figures that will easily fit in with many of the DC Direct/ DC Collectibles figures you already own.  It’s been awhile since DC Collectibles has released an artist specific line, but one based on Capullo’s work seems like a great choice. The Riddler stands right around 7 inches tall and just has a very great modern Riddler appearance. He might be the best Riddler figure since the Jim Lee styled Riddler from the Hush line. 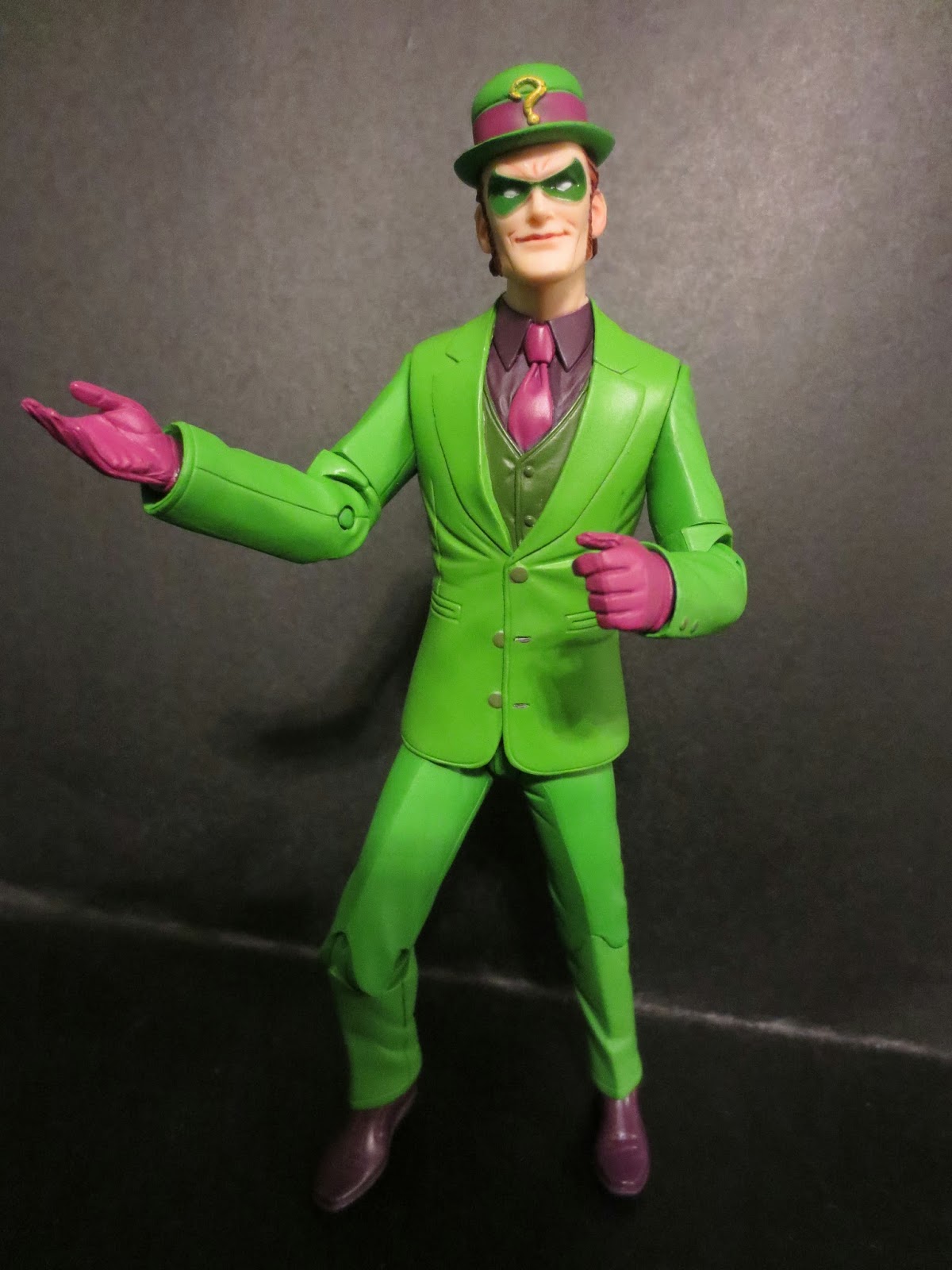 While the other figures in this series (Batman, Nightwing, and Talon) are super articulated, Riddler is not. He features the following points of articulation: ball jointed ankles, hinged knees, swivel hips, a swivel waist, swivel shoulders, swivel biceps, hinged knees, swivel wrists, and a ball jointed head. That's a fair amount of articulation on paper, but let's be honest: It doesn't allow for much movement. The ball jointed ankles are nice because they do allow you to put Mr. Nygma into a solid standing pose which, with the simple hips and knees, is about all he can do. His hands are capable of some nice expressive poses, however, such as holding his cane and making some smarmy hand gestures. I wish the shoulders were ball joints, though. The ball jointed head is excellent! It really allows for some great expression in the poses. I'm actually OK with the limited articulation, because unless you're talking about a more classic, manic  Riddler such how the character was portrayed by Frank Gorshin, John Astin, or Jim Carrey in a green jumpsuit, I'd rather the Riddler stand around looking sharp and smug. 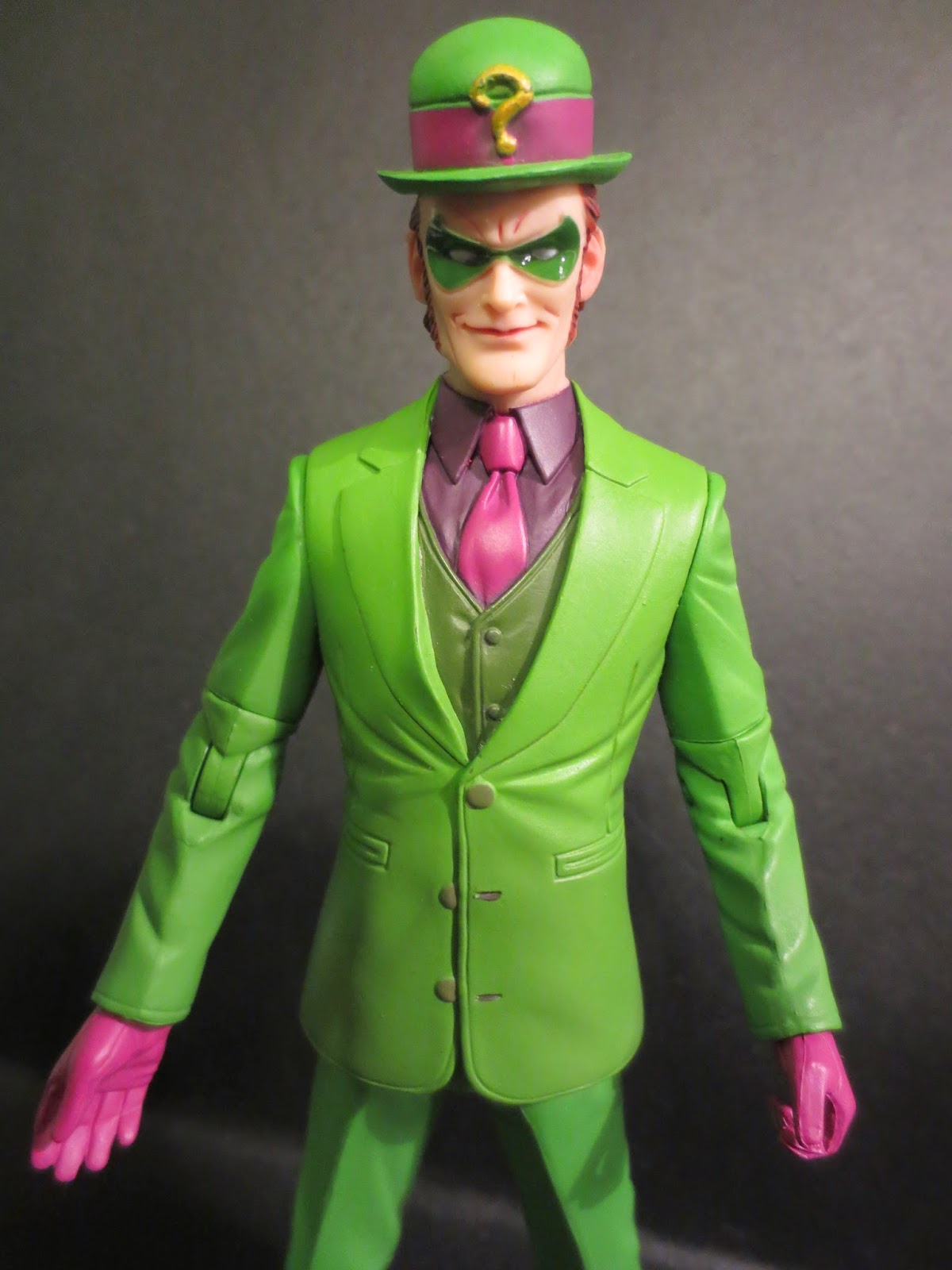 This is an excellent Riddler sculpt. I think this is easily the best Riddler sculpt ever done and will probably stay the gold standard for quite some time. The Riddler is decked out in a simple, modern three piece suit that seems perfectly tailored to his slender frame. Check out the pleats on his pants, the folds under the breast of the suit, and the various buttons and pockets on the vest and jacket. Edward Nygma is a sharp dressed man, indeed. He's also sporting some really fancy shoes. I love how well dressed the majority of Batman villains are, don't you? 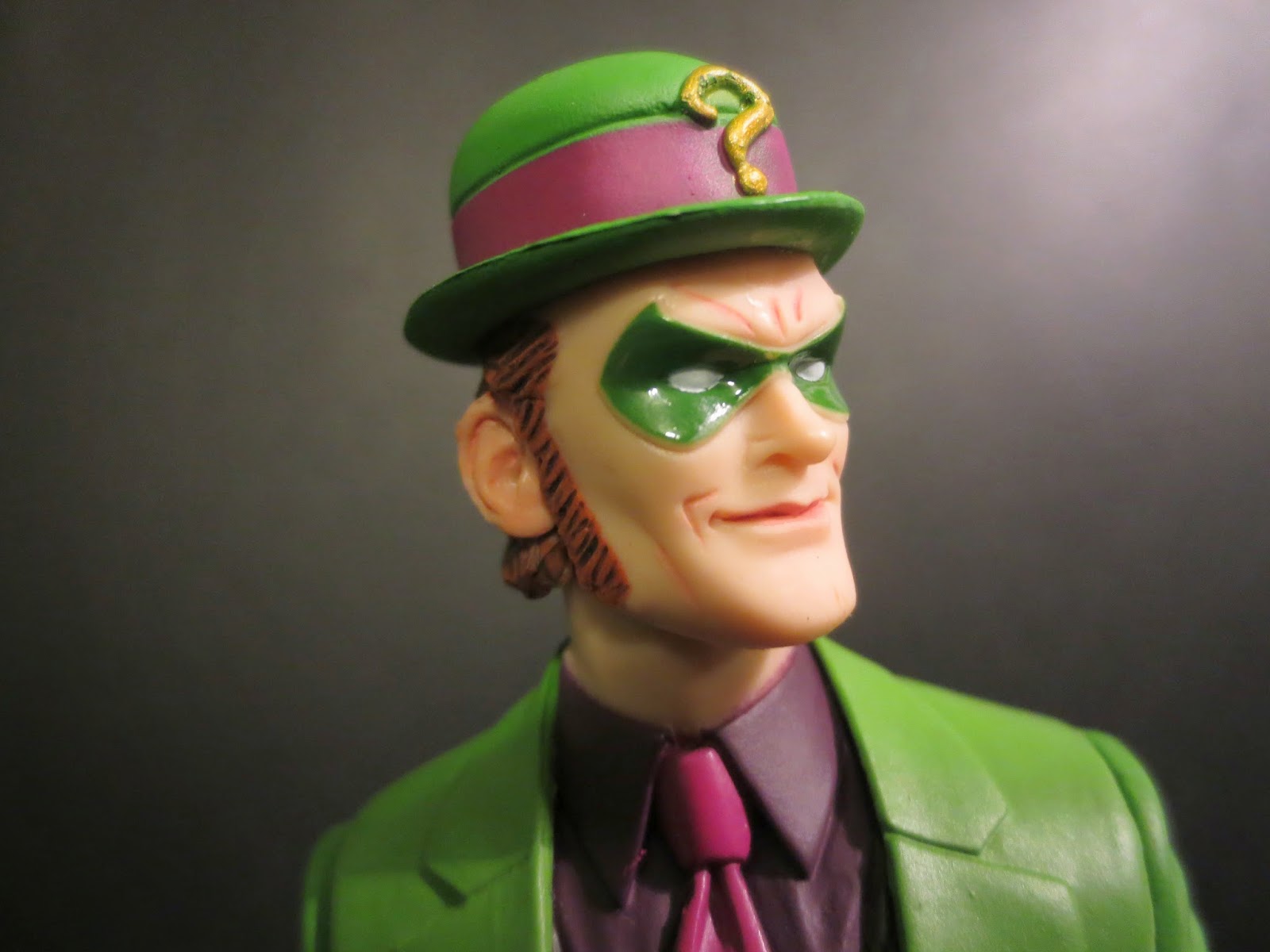 The head sculpt is the real winner here, however. It's gorgeous and really captures a very confident, slightly playful expression. The lines sculpted onto the face both add characters and nicely replicate an element of Mr. Capullo's artistic style. The smaller bowler seems to be a separate piece (although not removable) and has a sculpted question mark on it and nicely covers the top of the Riddler's head. There's some excellent sculpted hair visible as well as this version of the Riddler's long side burns. The hat looks great from the front and sides but in the back you can see a little gap where the hat wasn't pushed down all the way. It's not overly noticeable, though. 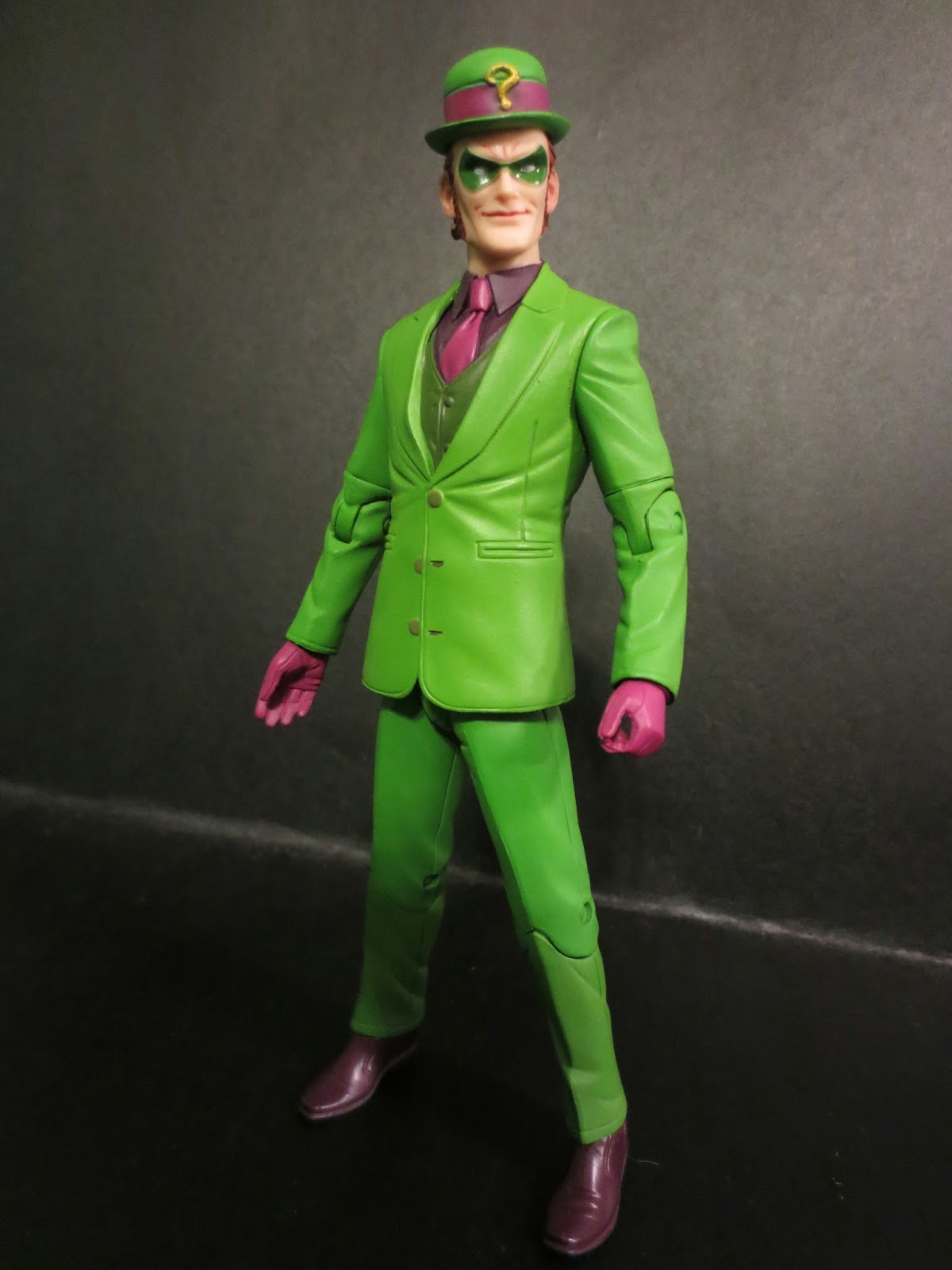 The paint is really striking. I always love the color combination of green and purple and darned if the Riddler isn't rocking it here. The main suit is a perfect shade of Riddler green while the vest is a darker green (more of a forest green). It looks awesome. The purple on his gloves, necktie, and the band on his hat are all a brighter shade of purple while the dress shirt and shoots are a darker color. The shoes are even a bit shiny to replicate a leather or pleather material. The only complaint I have is that the gold question mark on the hat is a little messy. Not terrible, but not as perfect as everything else. The headsculpt is awesome, however, as even the lines on his face have a light paint app to help them stand out. They look marvelous and, again,  really capture the style of Capullo's art. 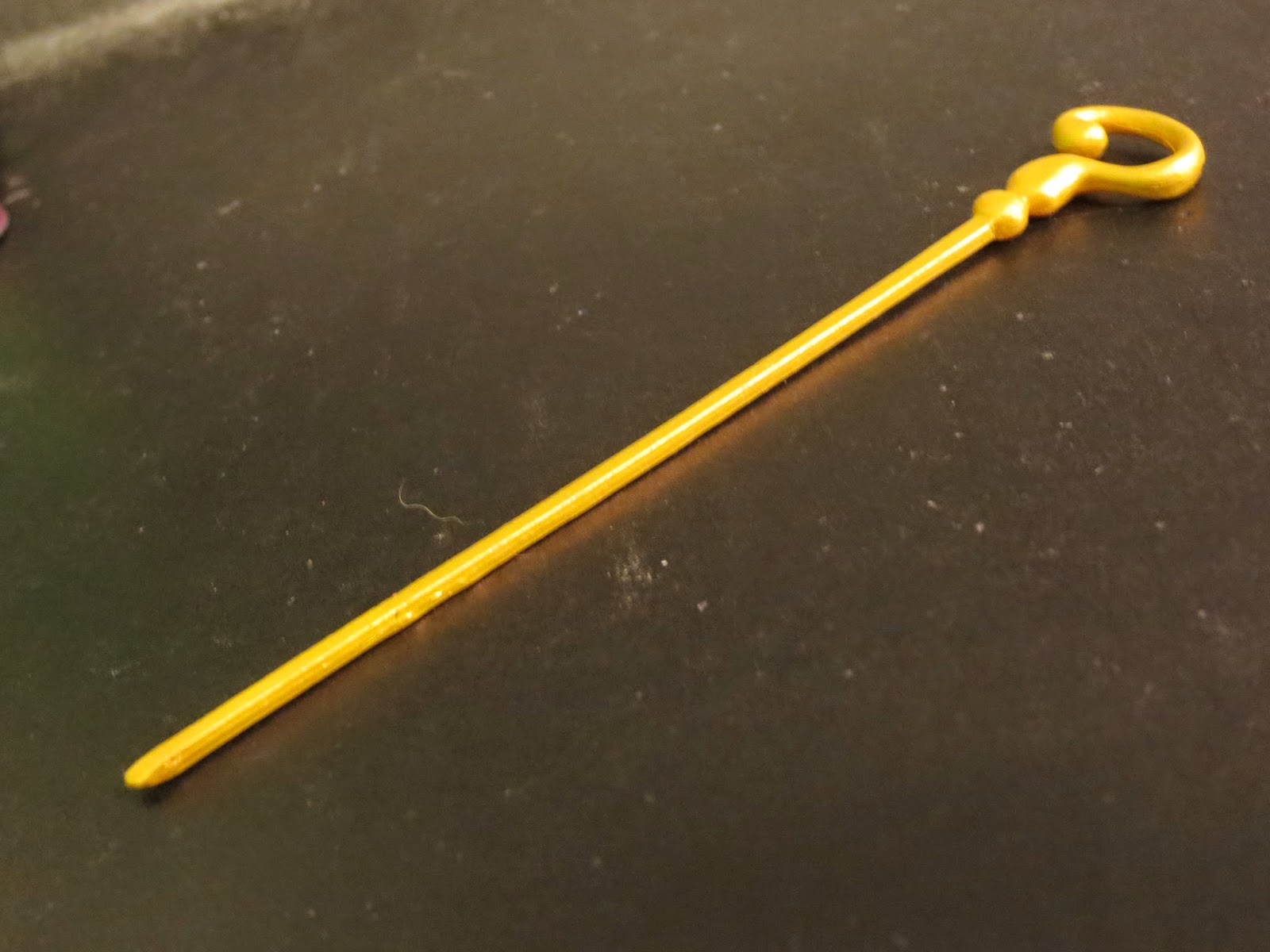 The Riddler is fairly light on accessories, although I'm not totally sure what else he could have come with. His only accessory is his trademark question mark shaped cane. This is a very simple sculpt: an ever so slightly  tapered shaft with a rounded question mark for the handle. I know it's not the only time the Riddler used a gold colored cane, but it definitely makes me think of Jim Carrey's Riddler cane from Batman Forever. It seems like it could be a tad brittle, so be careful with it! It fits wonderfully in the Riddler's left hand and he can even hold the handle in both hands with the tip of the cane resting on the ground. 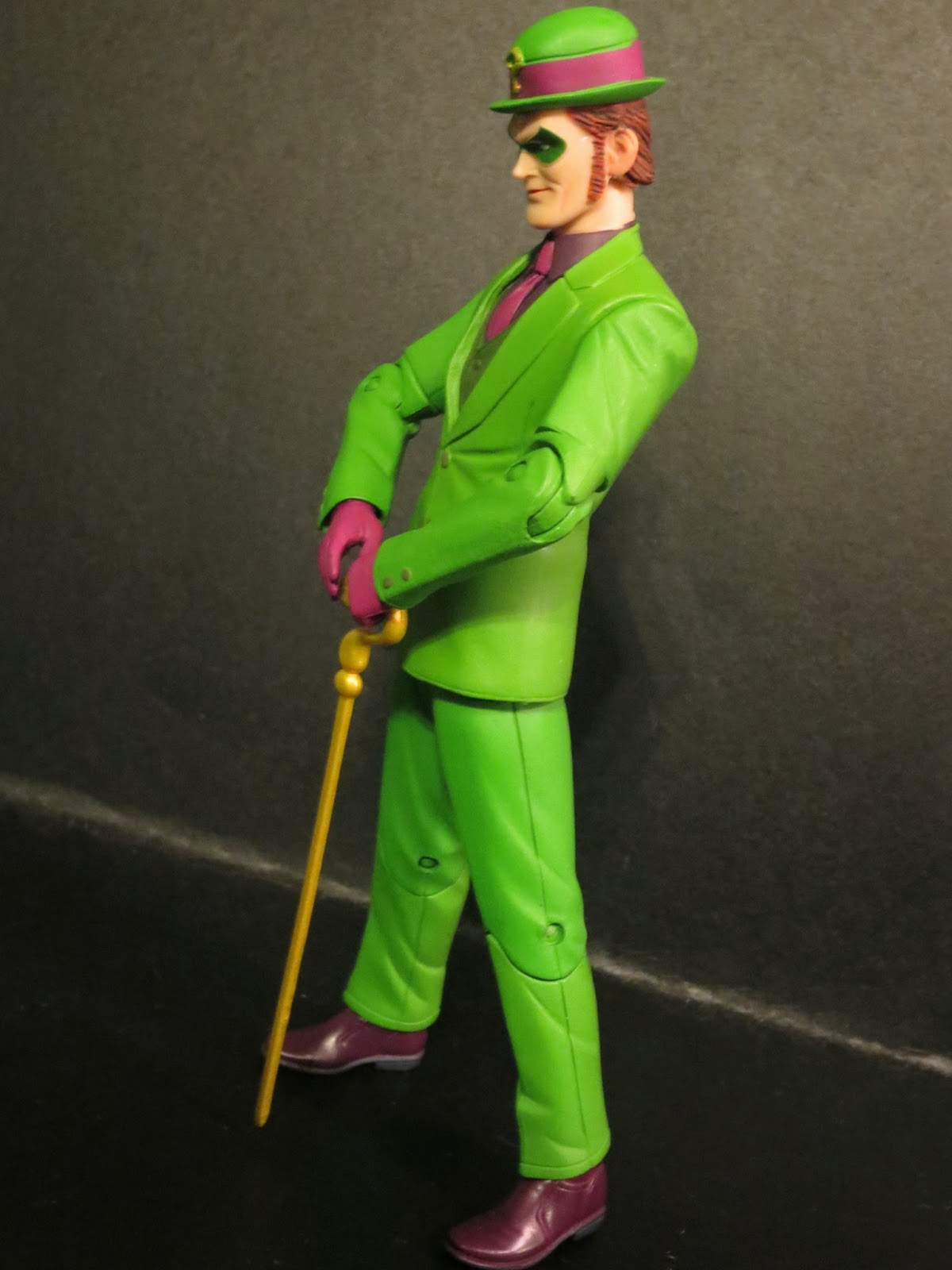 This version of the Riddler is definitely the best Riddler figure ever released up to this point and features an amazing sculpt and paintwork. While I lament the lack of swivel/hinge shoulders, their absence isn't as noticeable as it might be on a more action oriented character. I'm definitely very happy with this figure as the Riddler doesn't seem to be a Bat villain that we see action figures of over and over. DC Collectibles did an excellent job on this guy and I'm really happy to have him on my shelf. I'm giving him a Great and a 1/2. 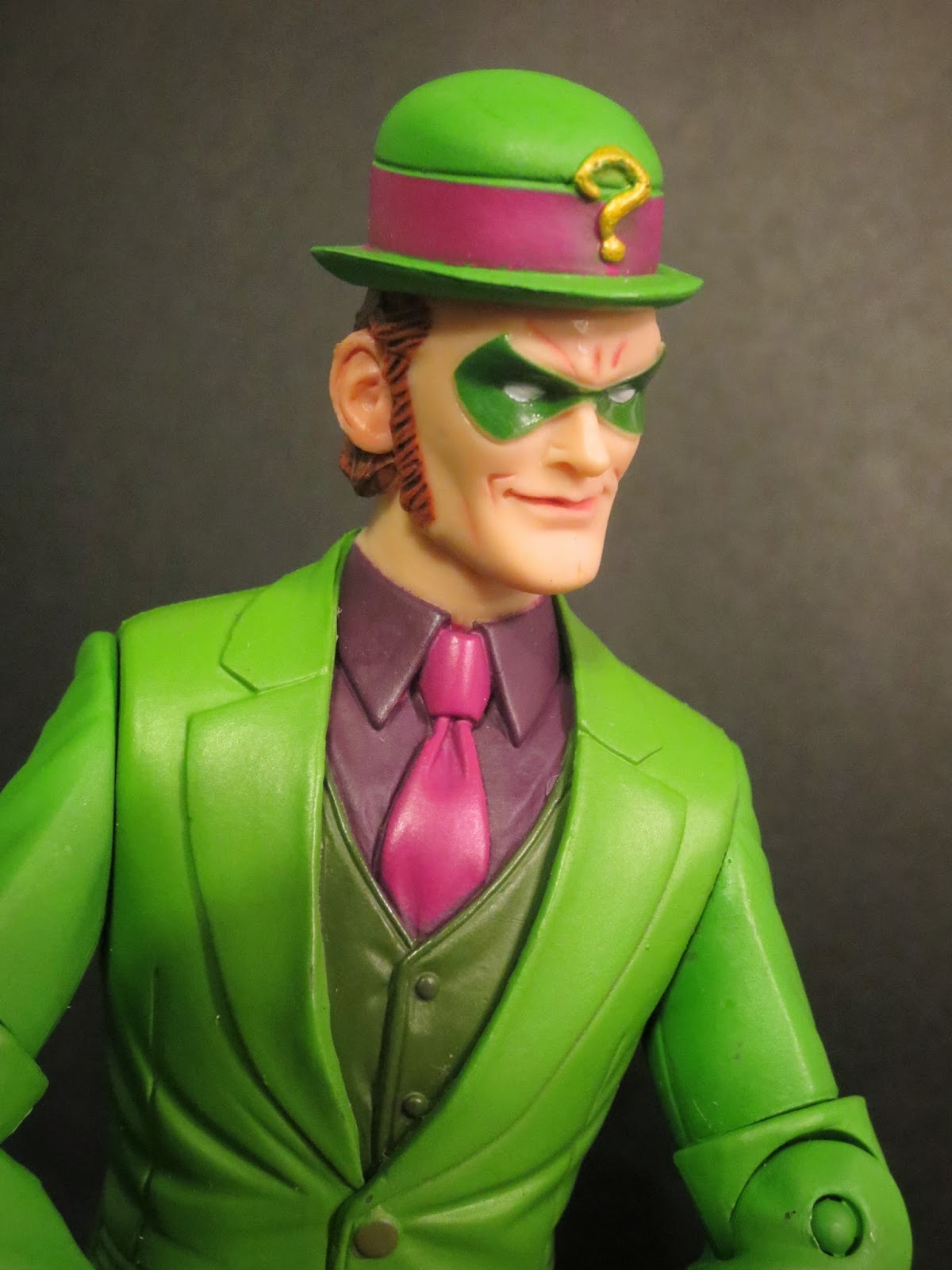 Want a Riddler of your own? Big Bad Toy Store and Entertainment Earth both have this figure in stock below the retail price of 24.99 (along with the other figures in the series: Batman, Nightwing, and Talon).

This isn't the first Riddler figure I've reviewed. Check out my other reviews here:

The Riddler (Kenner's Legends of Batman)