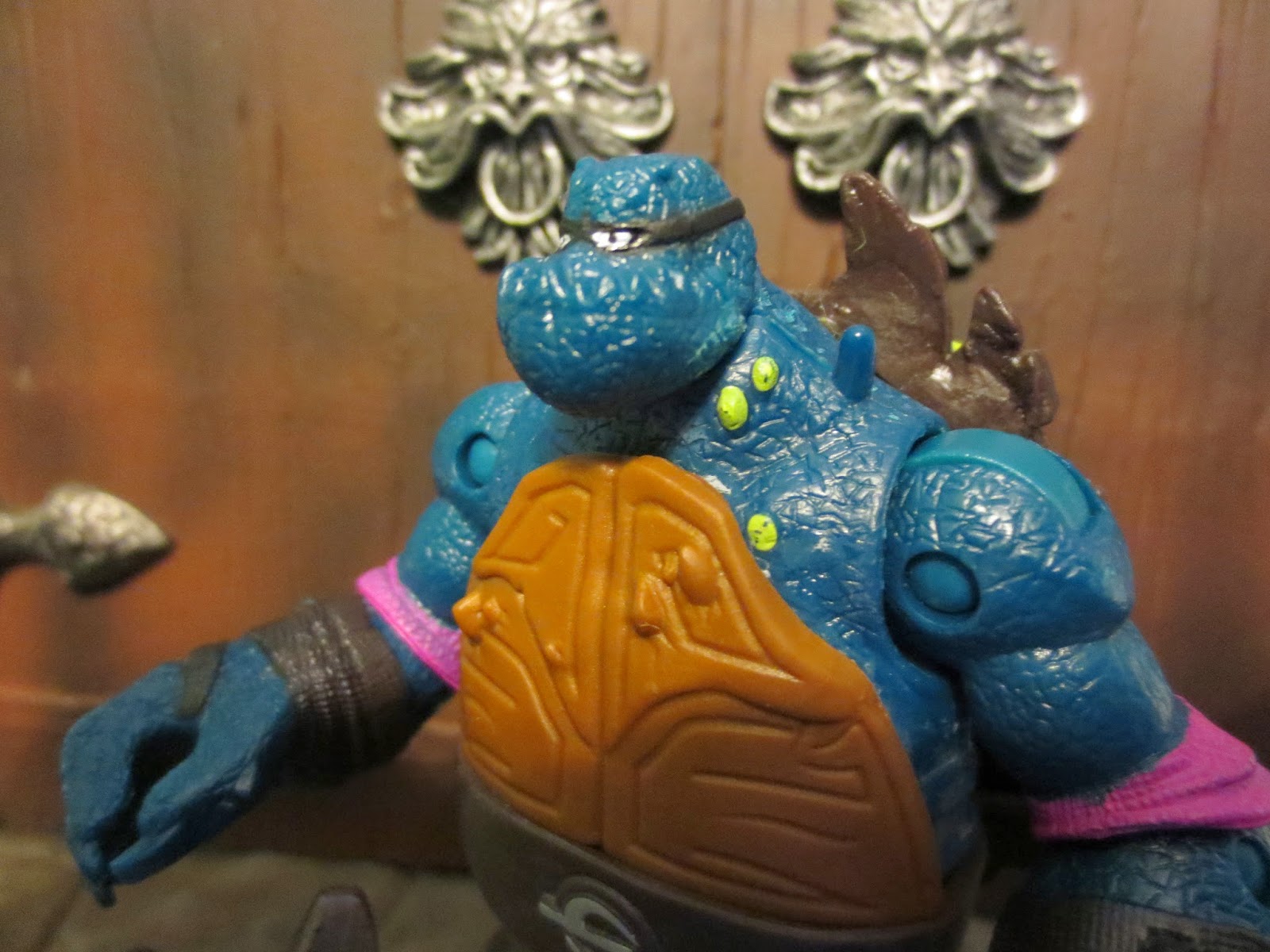 The Slash figure from the vintage Teenage Mutant Ninja Turtles toyline has always been one of my favorites! Much like Superman has Bizarro and He-Man had Faker to battle against, the TMNT had Slash as an evil version of themselves. The original figure looked much quite a bit like the turtles and he was armed with weapons that were warped parodies of their own. I think Slash was one of the figures I was most excited for in this new TMNT toyline that started in 2012 based on Nickelodeon's ongoing animated series. I ran into Slash yesterday along with a few other new figures (Rahzar and Dojo Splinter) and snapped him up immediately. In the new series, Slash (voiced by Corey Feldman) is originally Raphael's pet turtle who not only learns how to fight from watching Raph but also develops a grudge against the other turtles from listening to one to many of his hotheaded rants. Once mutated, Spike becomes Slash, a force to be reckoned with by man and mutant alike. Ready for a look at Slash? Then join me after the break.... 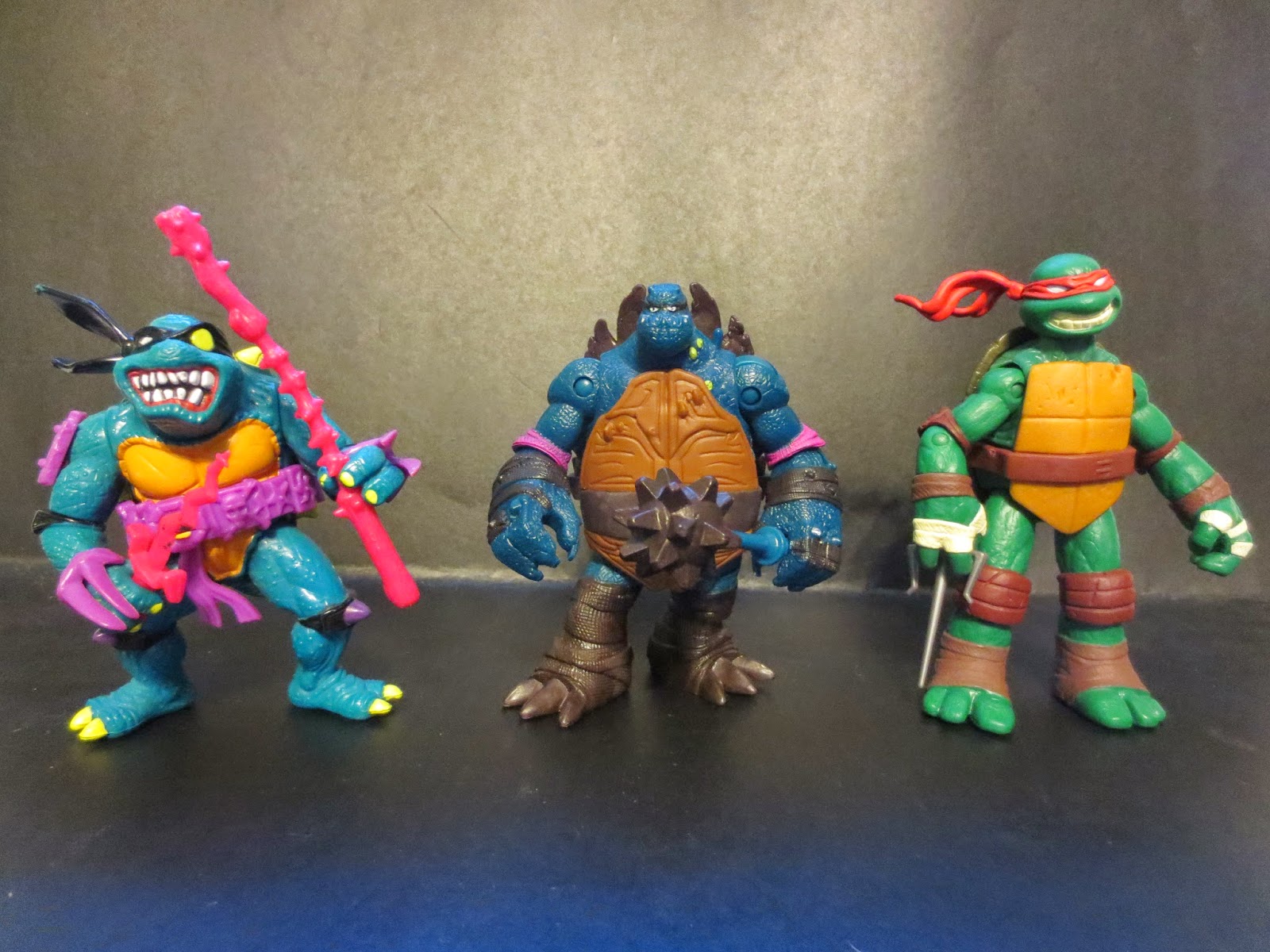 For my money, Playmate's TMNT is pretty much the only retail toyline out that feels like the action figure lines many of us grew up with in the 1980's and 1990's: Unique sculpts, a ton of unique characters, and a natural sense of growth and progression in the line really makes this a fun line to collect, even when a few duds come along. I always have to remind myself with this line that Playmates is absolutely gearing these to the kiddies, otherwise things like this line's complete lack of scale just drive me too crazy. Slash only stands a little over 4 inches, meaning he's a good bit shorter than the turtles themselves. Yeah, for a character who is supposed to be a big, hulking brute, this definitely looks a little silly. Still, Slash has the same perfect blend of menace and fun that all the best TMNT villains possess and fits in great with the unique style of this line. 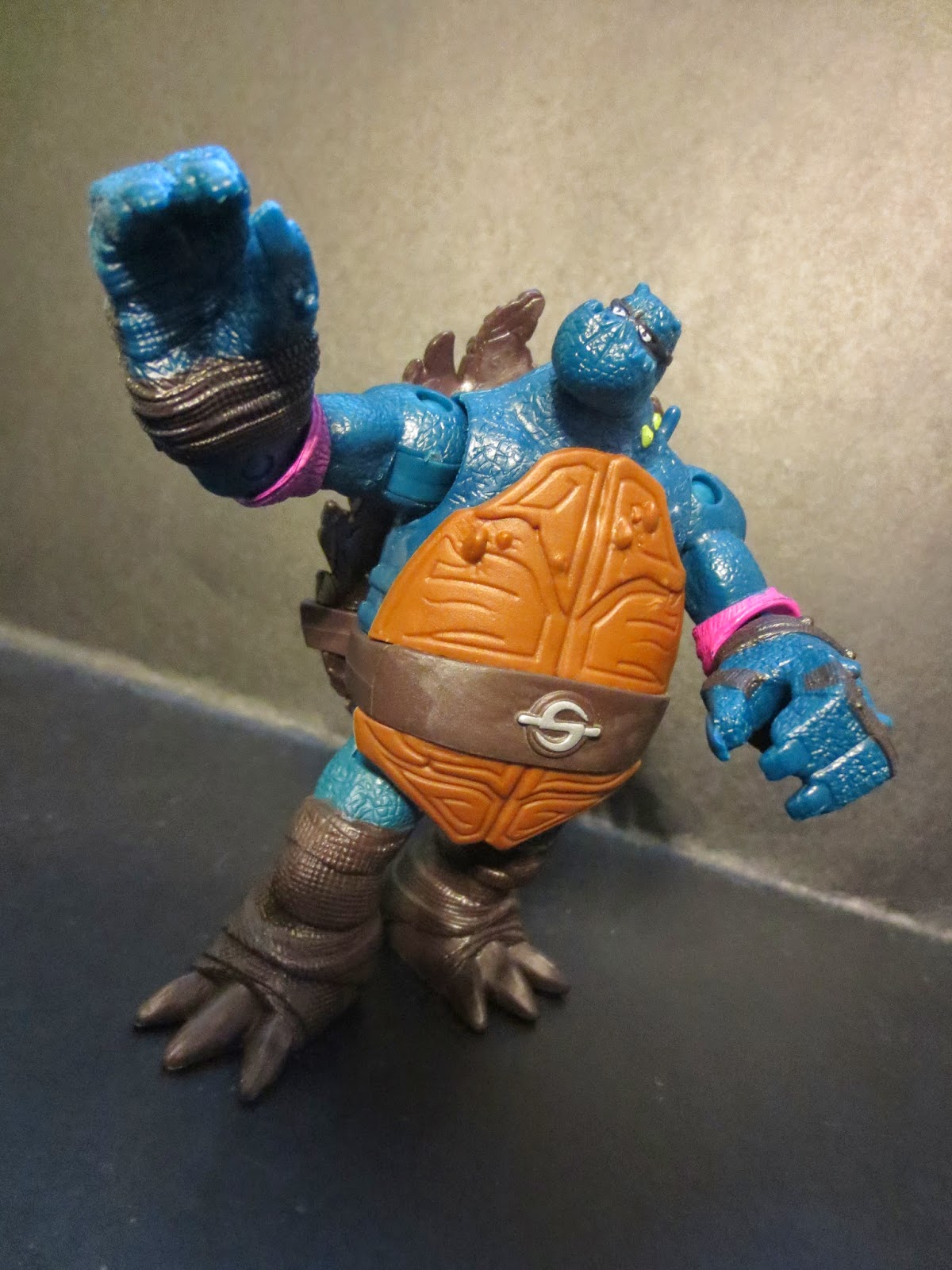 Unfortunately, Slash isn't as articulated as his fellow turtles. He features: swivel/hinge hips, swivel/ hinge shoulders, swivel/hinge elbows, and a swivel neck. Most of he TMNT figures are fairly minimally articulated, but I really would have loved some swivel wrists on this guy. His arm articulation isn't bad, but it's nothing to write home about either. Of course, since these are built for kids they are incredibly sturdy with no hint of quality control issues. Spike is nice and solid! 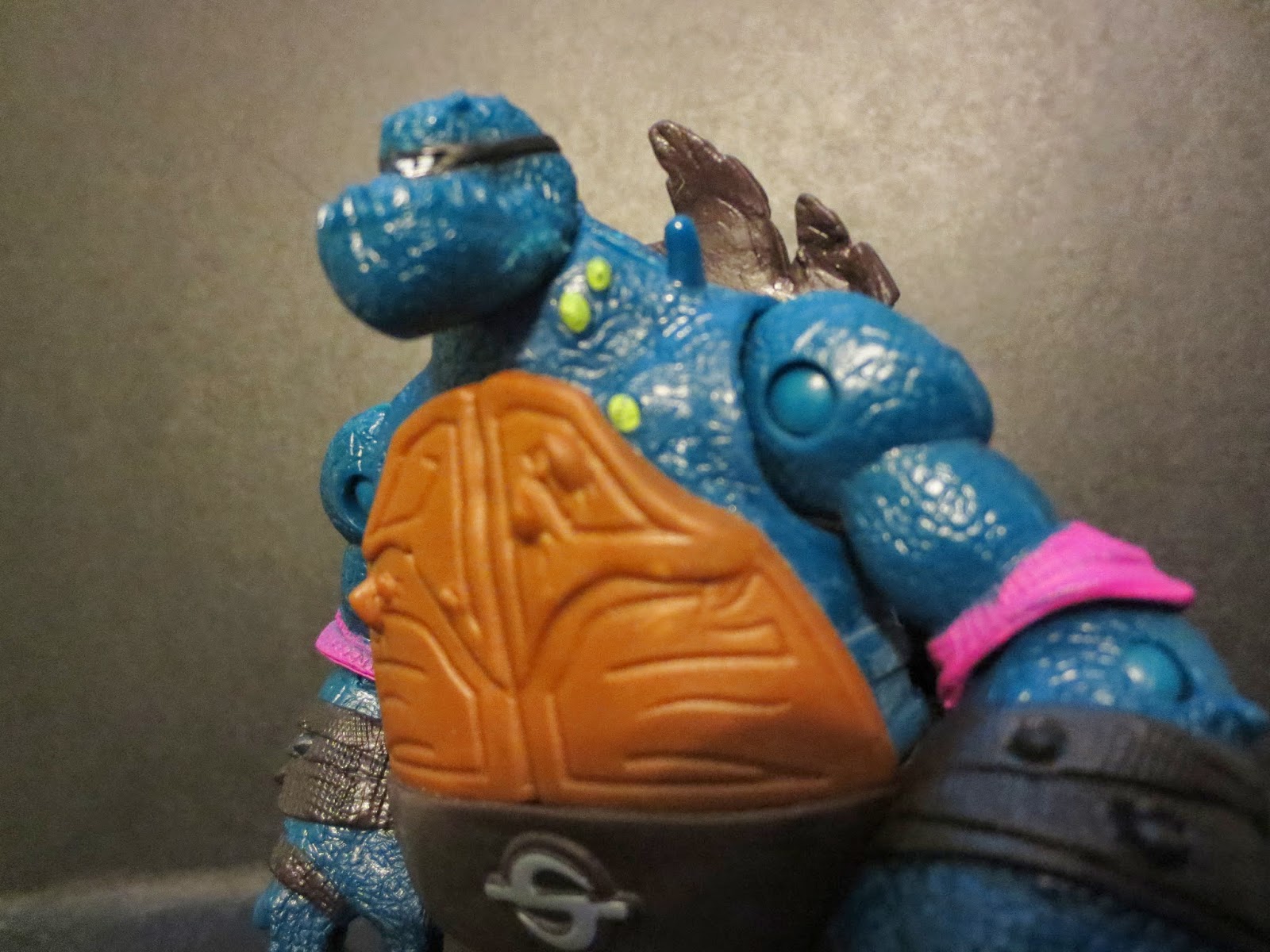 Now I get to be positive for a few minutes, as Slash has an awesome sculpt! There is just so much great detail and texture work on this figure. His skin is covered with a a unique texture and plenty of little spikes and protrusions. His shell is also incredibly rocky and uneven with various cracks and ridges all over the place that nicely capture Slash as a snapping turtle. I love the design of the character with his massive body and his tiny head; he really looks like a bruiser. The plastron is made of a soft rubber that fits over the chest with a nonremovable rubber belt wrapping around the body. 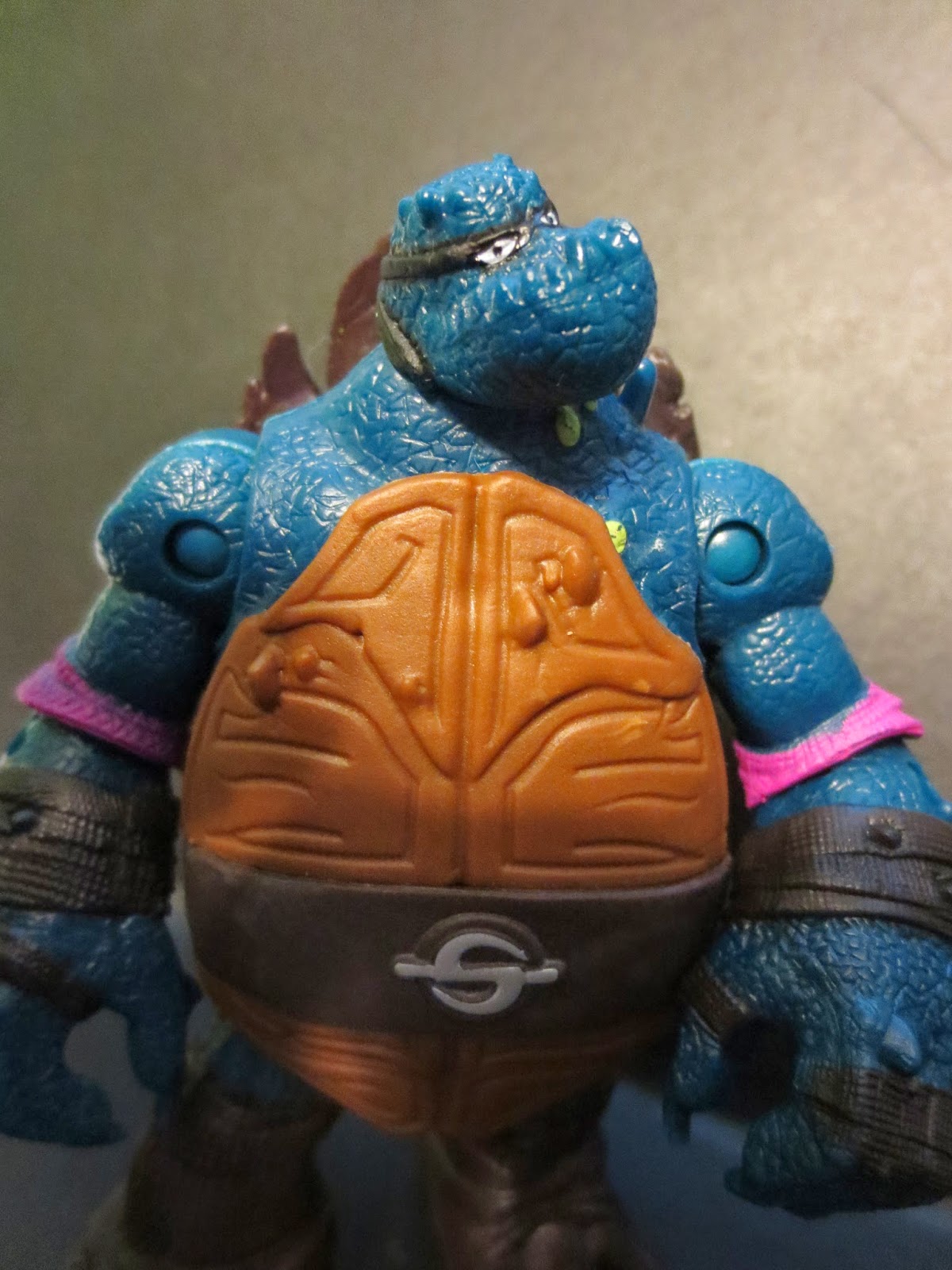 There's a lot about the color and paintwork of this figure that I like, but a bit that I don't as well. First, I love the color chosen for the body. The beautiful bluish green color of his skin looks awesome and really reminds me of the vintage toy. Other details such as his yellowish-brown plastron, purplish elbow pads, and his lime green shell definitely stand out in a positive way. Unfortunately, it seems that Playmates neglected to give Slash's upper claws and many of the spikes on his body a hit of paint. Considering that the large image of him on the back of the package shows both the animated version of the character and the cross-sell picture of this toy with yellowish green claws and spikes, I think this was a huge miss here. It really would have made Slash one of the most attractive figures in this line. 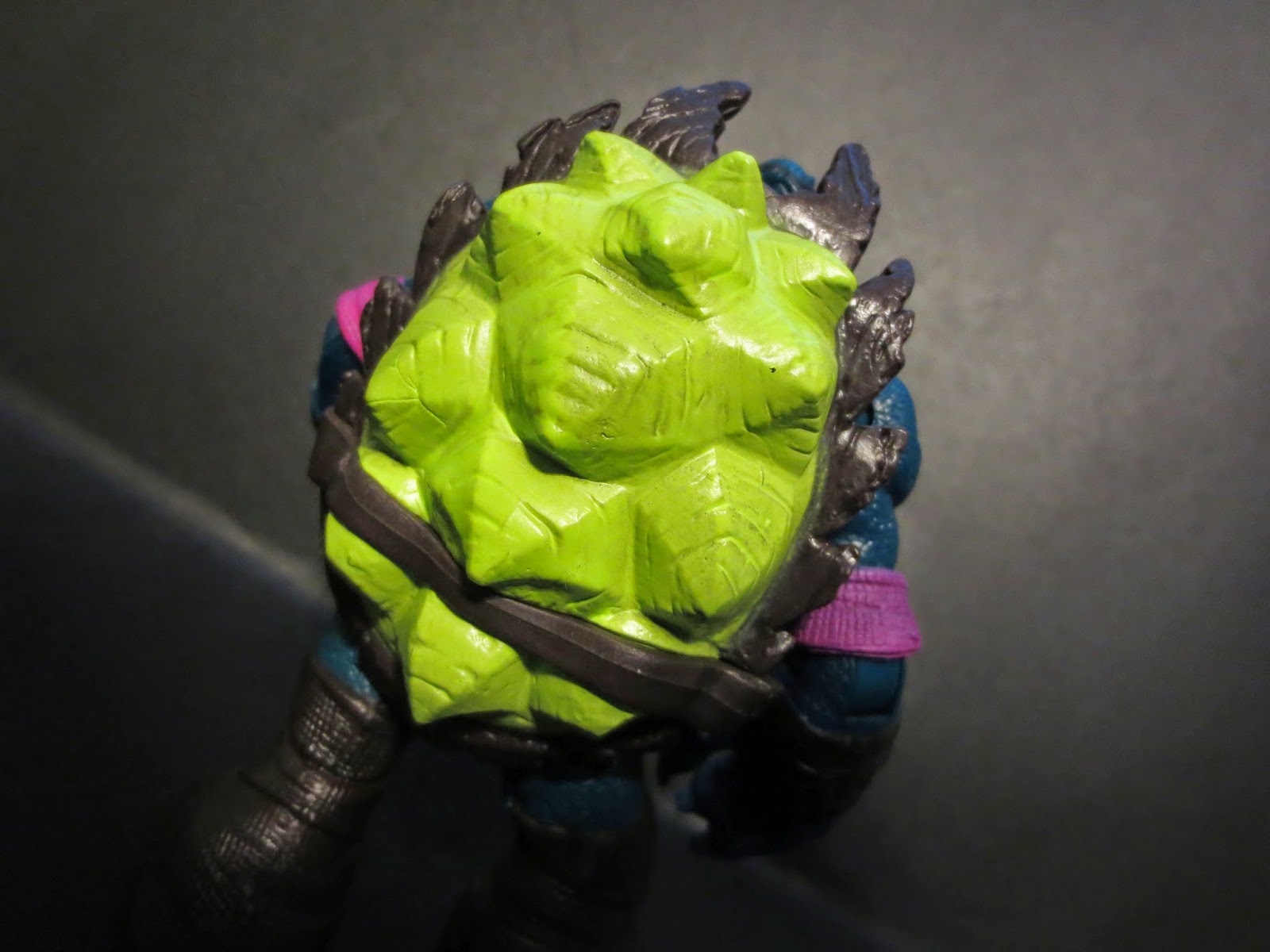 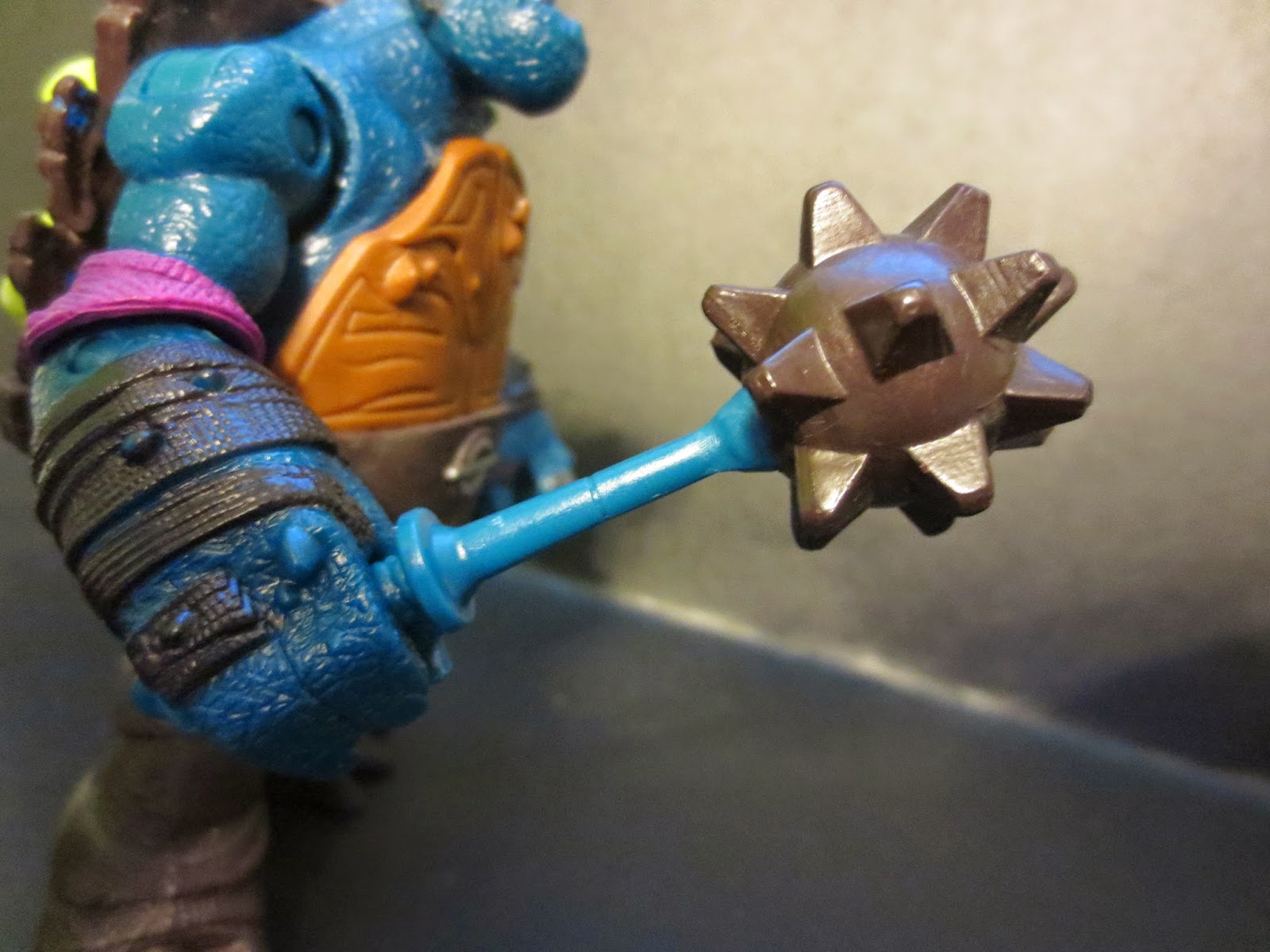 While the vintage Slash figure came with weapons that were more brutal versions of the turtles' signature weapons (a spiked club, a spiked pair of nunchucks, a curved sai, and a large trench knife), the modern Slash only comes with one accessory: a spiked mace. It's a nice accessory with a handle molded in the same teal green as Slash and a head that matches his shell. It fits easily in either hand and gives this bruiser his own unique weapon that differs from the turtles. Still, I wish we'd gotten at least one other weapon for him. I'd be much more willing to overlook some of the oddities of this line such as unpainted details and bizarre scale issues if Playmates gave very figure at least two accessories, but it just doesn't seem to be their modus operandi here. I guess would should be glad Slash came with anything at all. 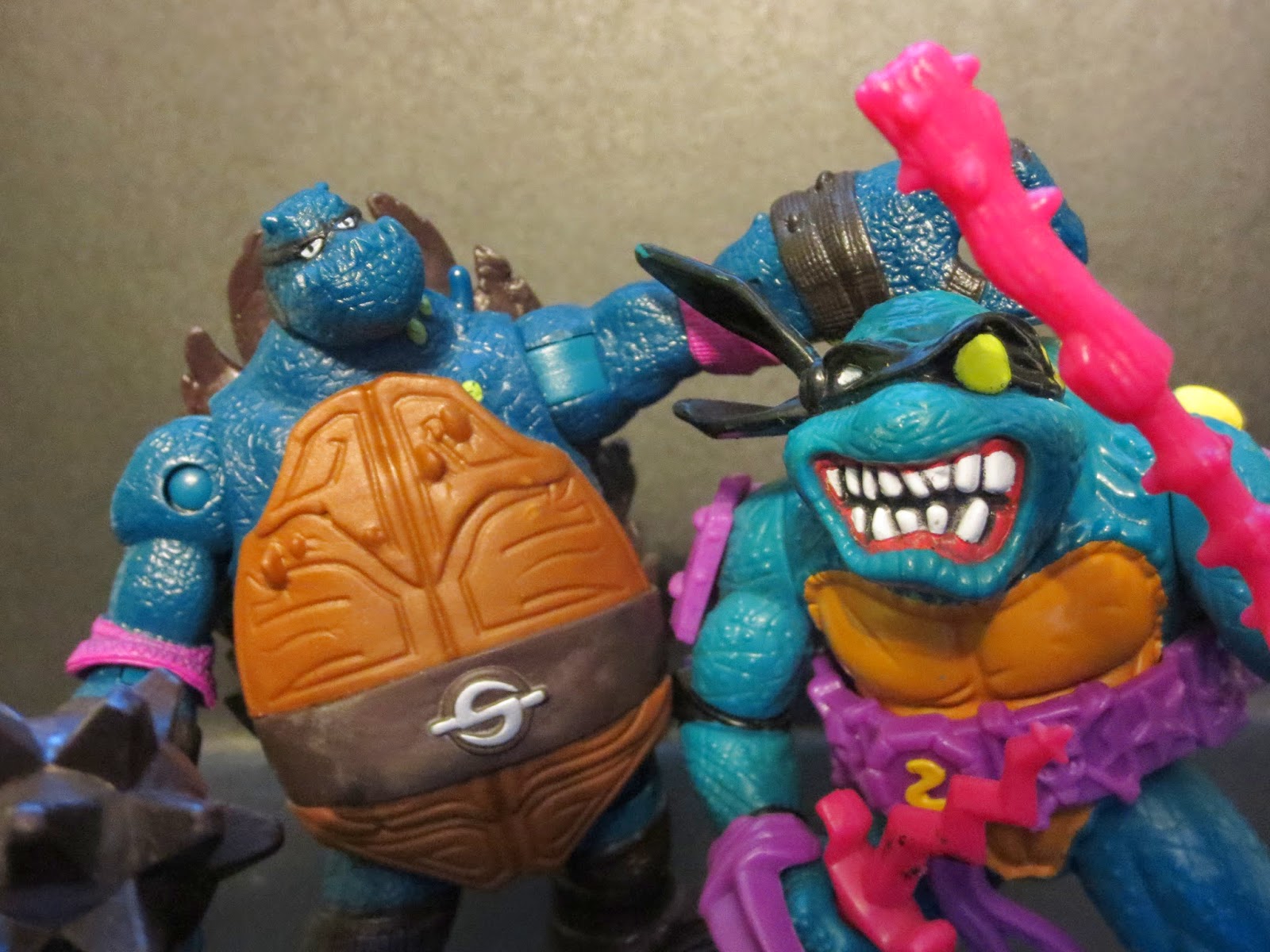 I feel like I come off as overly negative in my TMNT reviews, but I guess I just feel like there are a few little issues that Playmates could address that would make these guys truly excellent action figures. Still, I can't argue that Playmates has a system and it's working for them. They've been running this line on all cylinders for almost two years now with no sign of slowing down. There's a lot about Slash that I like: he looks great, has a very detailed sculpt, some excellent color choices, and some reasonable articulation for this line. He's got some issues, but they don't kill my enjoyment of the figure; just dampen it a bit. Overall, I'm giving him a Good and a 1/2. He's definitely one of the better TMNT toys we've seen in a while, and I'm thankful for that. Of course, give him to a kid and they probably won't notice half of the issues I've mentioned. If you're in the right frame of mine with this line, you'll be in much better shape to enjoy it. 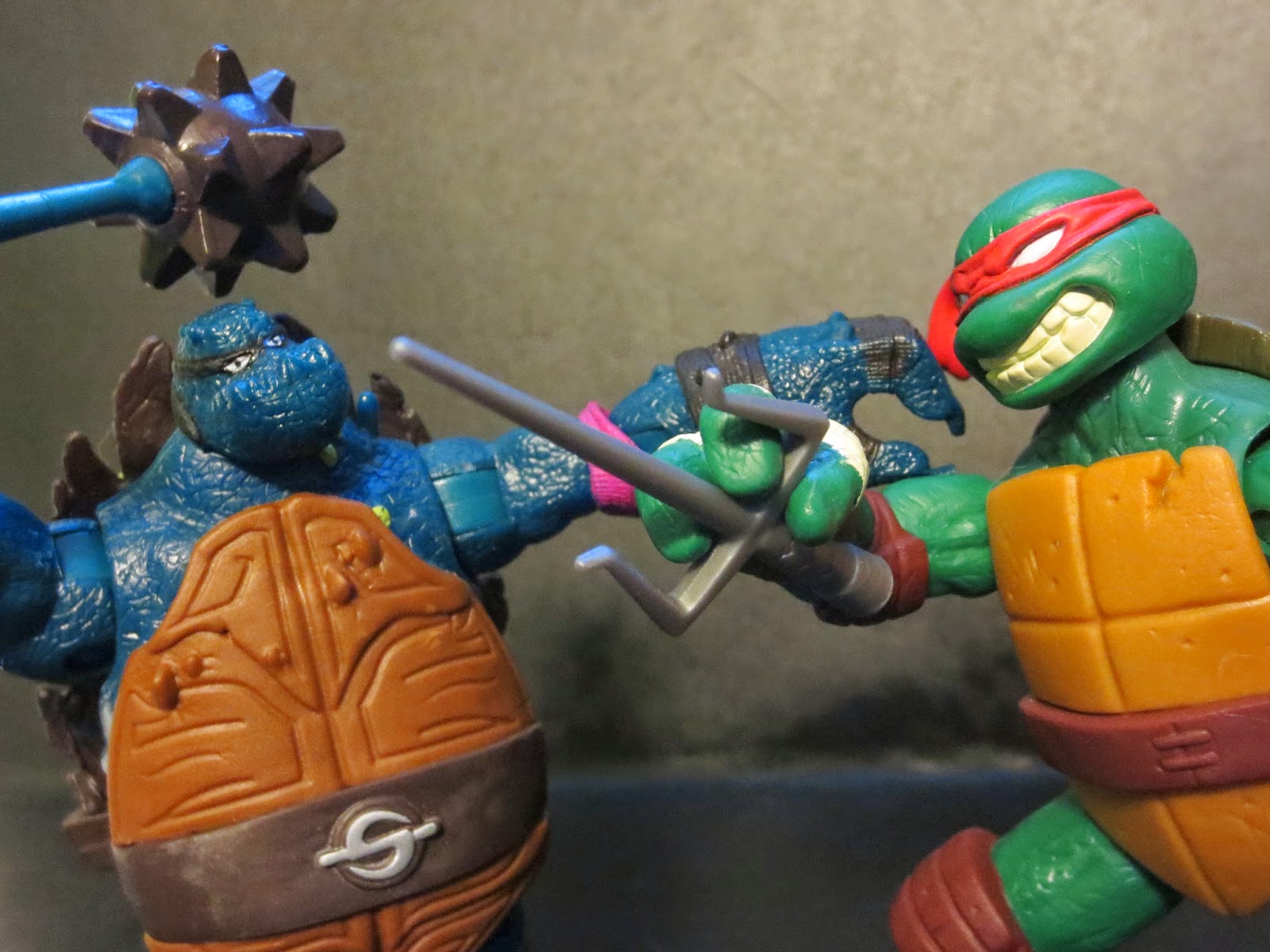 I've reviewed quite a few of the Nickelodeon based TMNT figures here on ThEpic Review, including: