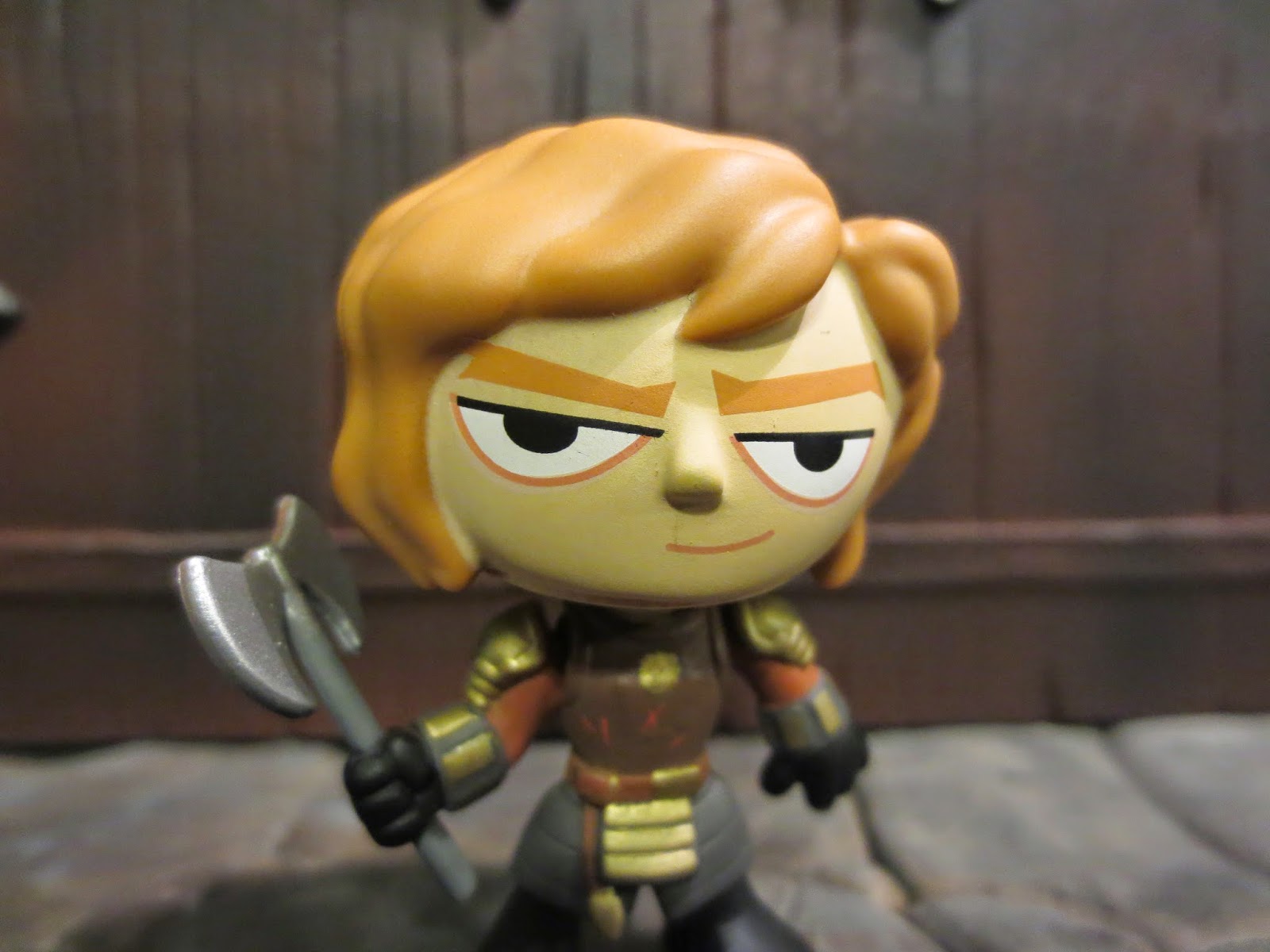 If you want to talk about a company that seems to have really found its niche and is thriving there, even in the current crazy, ever changing toy market, look no further than FunKo. Their Pop! Vinyl line has really taken off over the past few years and continues to get licenses that action figure collectors could only dream of having in one unique, consistent scale and style. Not only have they pretty much taken over the mainstream market for stylized vinyl toys, but they've also managed to get into the blind boxing game with their Mystery Minis. Let me say that I really don't like blind boxing. I totally understand why it works and I definitely see the appeal of opening a random toy, but for collectors who want to complete a line it can just be annoying. Fortunately, at ConCarolina 2014 this past weekend I saw a very cool way to tackle the blind boxing issue that caused me to jump in and pick up two figures from FunKo's Game of Thrones Mystery Minis line.
While waiting for the Reel Brad Bell to get a poster autographed by George R. R. Martin, I just walked around ConCarolina talking to people, taking pictures of cosplayers, and hanging out at the Rebel Base booth where they were selling Game of Thrones toys like crazy. Rebel Base had a neat system in place where they had two opened minis on display and if you opened a mini that you didn't want or already had, you could trade for one of the two minis on display. I hung around the booth quite often to watch people open the minis and see what new figures went up for trade and eventually decided that I wanted to jump in on this, too. Before opening my two boxes, I publicly stated that I wanted Tyrion Lannister and Ghost. Guess what? I got Tyrion Lannister and....another Tyrion Lannister! Crazy, huh? Well, let's check out everyone's favorite Imp after the break... 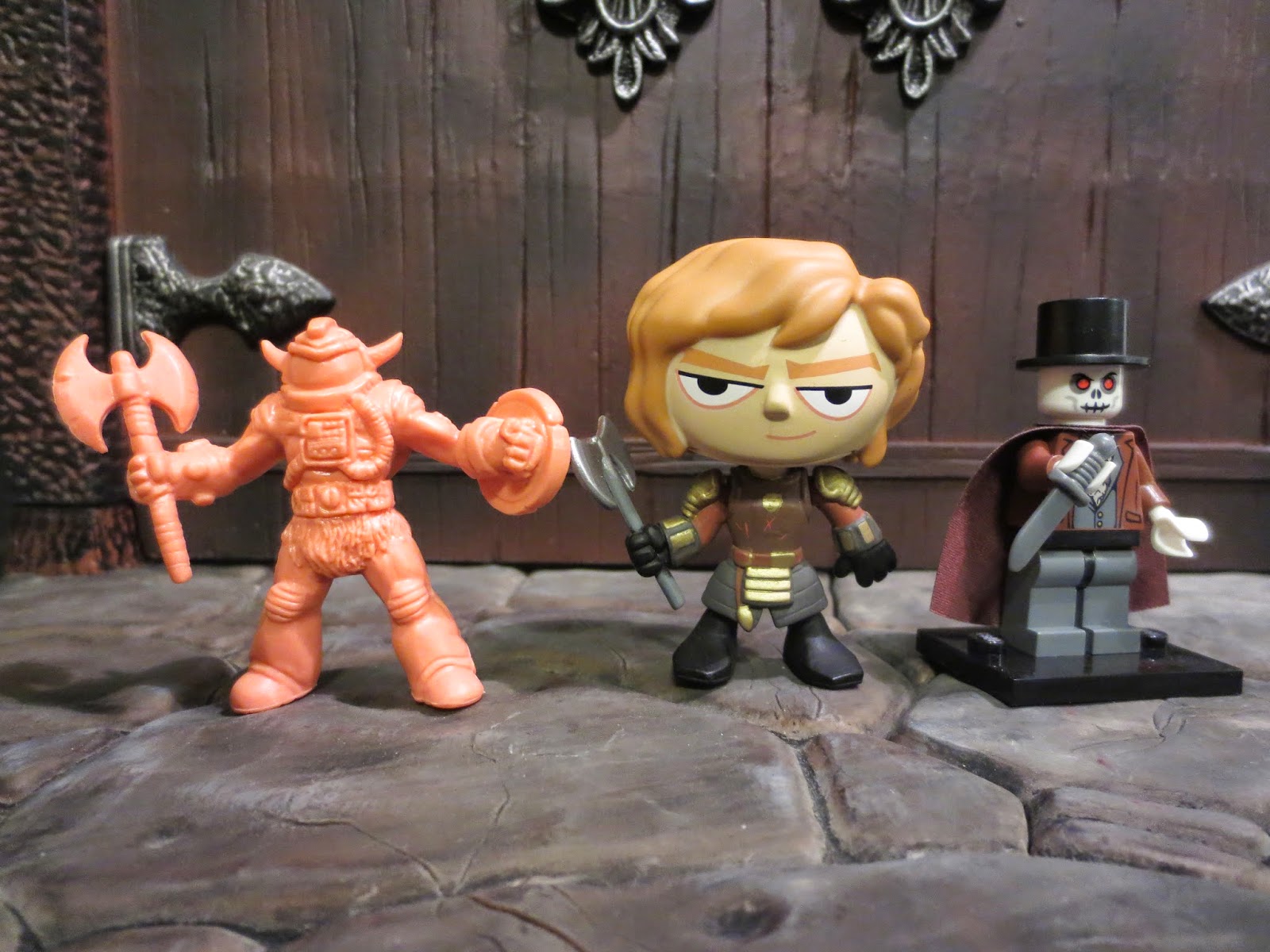 Since these are stylized miniature vinyl figures, it's difficult to ascertain a real sense of scale. Standing around 2 1/4 inches, however, Tyrion does some to be bit shorter than the other figures in the set. As I mentioned in the introduction, each figure is sold blind boxed meaning that you don't know who you're getting until you open the package. Each figure has a rarity number that tells you how many of each figure you'll find in a new case. Tyrion is one of the most common figures (appearing twice in a case of 24 figures) while the captured Jamie Lannister and Drogon are the rarest figures, each appearing once in every 6 cases. These actually have a very different style than the standard Pop! vinyls as they have more facial details, actual eyes versus the black dots that define the Pop! vinyl style, and bodies in more dynamic poses. 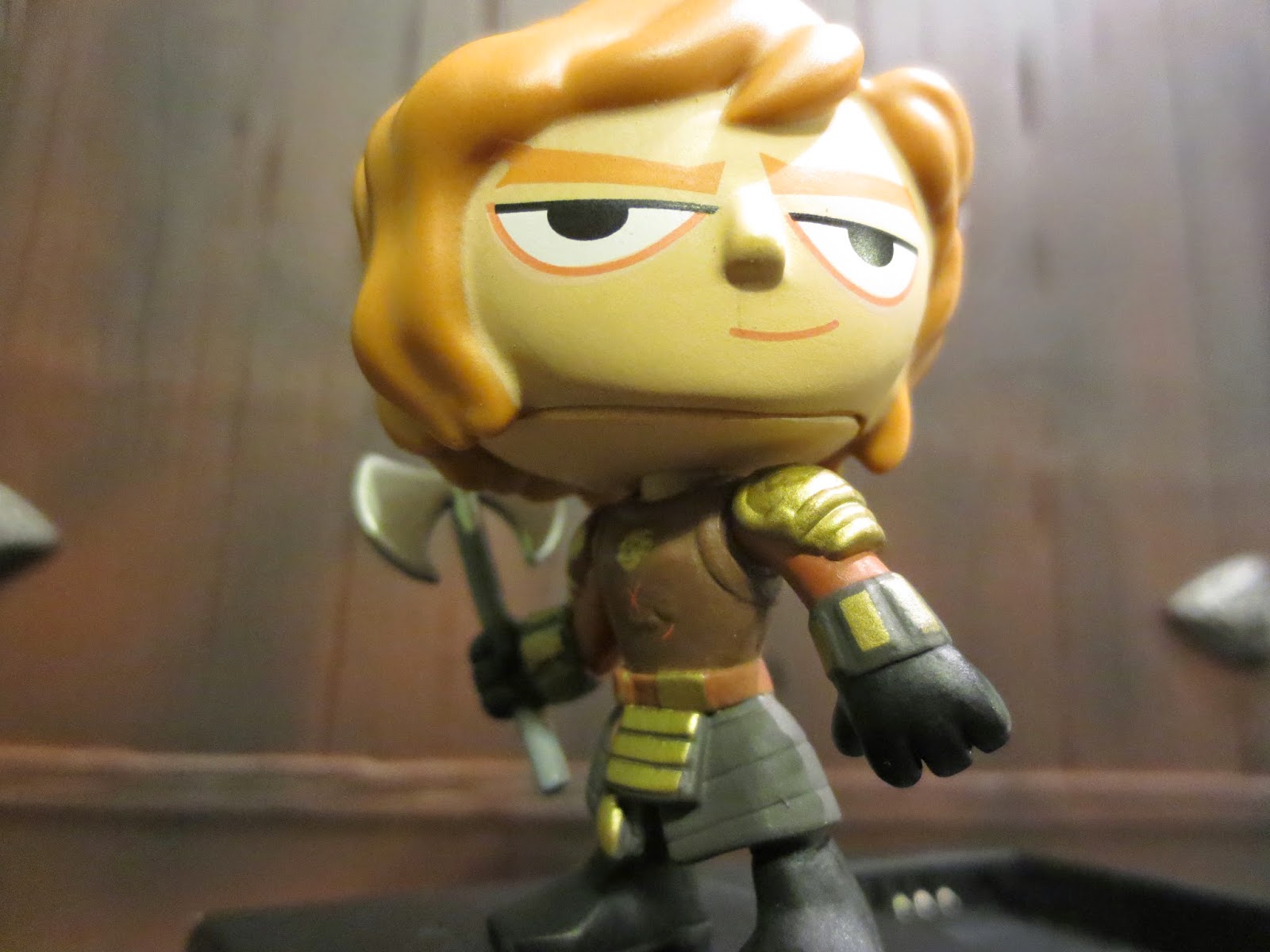 Tyrion only has one point of articulation: a swivel neck. I really like that this is included as it allows you to customize your display ever so slightly, although I'm not overly satisfied with the way it is implemented. The swivel joint works fine and feels very secure, but the way the over-sized rotocast vinyl head is attached to the body leaves a rather unsightly seam line right across Tyrion's chin. The seam is isn't as noticeable on every figure, but it is rather noticeable on Tyrion and really detracts from the look of the figure. It seems like a rather odd choice on FunKo's part. 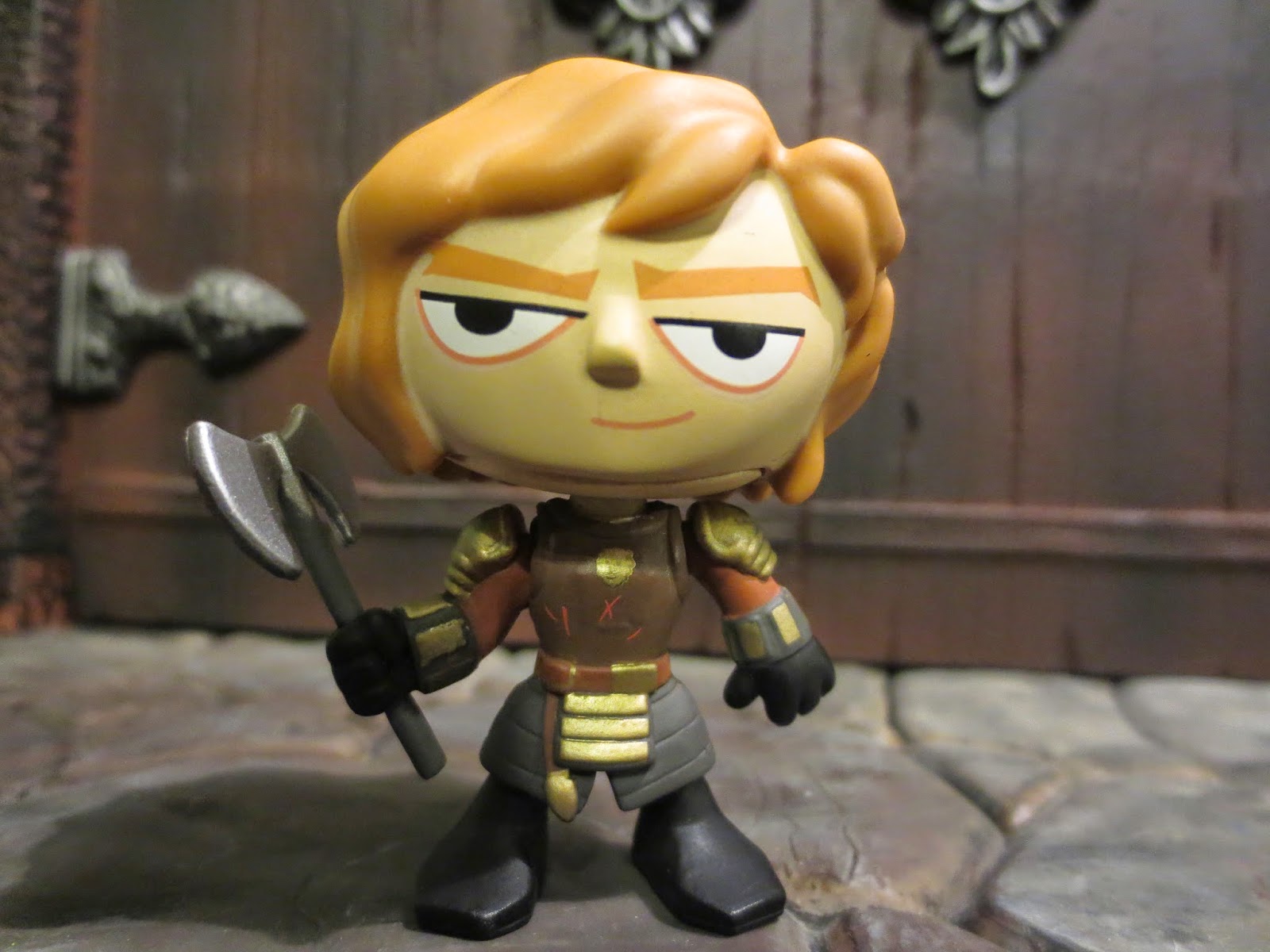 One of the things I like about Funko over some of the other vinyl lines that have come out is that each of their figures is uniquely sculpted. Tyrion is dressed in his battle armor and wielding a battle ax. This is a pretty nice looking mini, but I'm just going to come out and say that I'm not sure that if you showed this to me, even telling me that this was a Game of Thrones Mystery Mini, that I would guess this was Tyrion on the first try. Knowing it's Tyrion I can definitely recognize the armor, the ax, and the hair, but there's something about the face and the shape of the head that doesn't work for me. Most of the other characters look much more recognizable, so I'm not sure what the issue is here. I know these are stylized minis, but I think FunKo should have went with a longer, slimmer face versus more of a sideways oval shaped head. The armor does have a fair amount of nice details on it, however, such as defined plates on the pauldrons and a lined texture on the skirt. 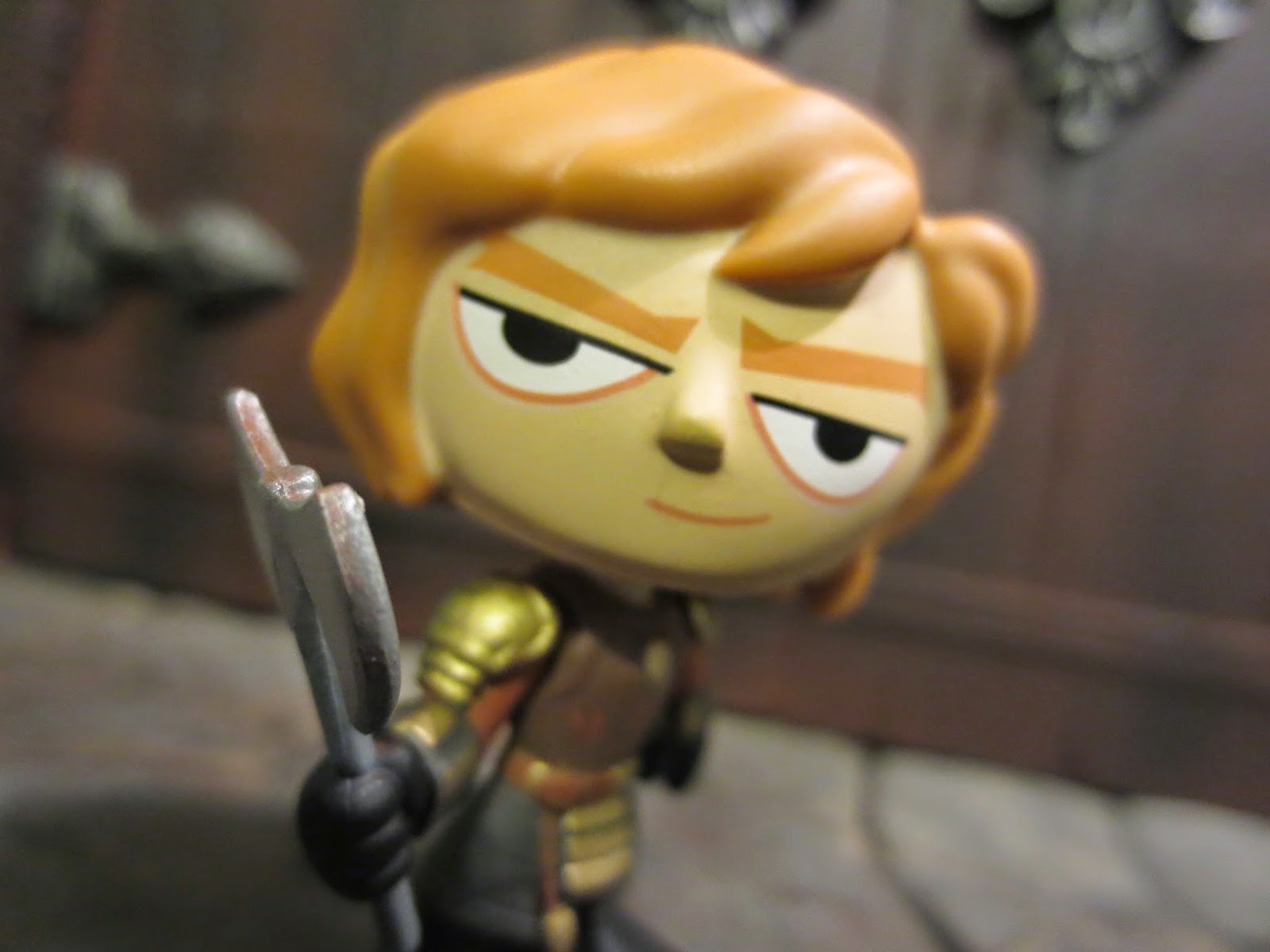 While the hair and nose are sculpted, all of the facial details are painted elements. This is a rather happy, sly, smug looking Tyrion versus the typically more dour expression that Dinklage pulls off so well. I love the eyes, eyebrows, and smirk, but once again nothing about this screams Tyrion Lannister to me. I know these guys are done with a more minimalist style but that only means that the few recognizable elements present need to really be significant and well-defined. The paint job on the armor is quite neat and clean, however, and other than some minor ill-defined lines here and there, it looks great. I love what looks like little rips (or maybe blood streaks) on his breastplate. 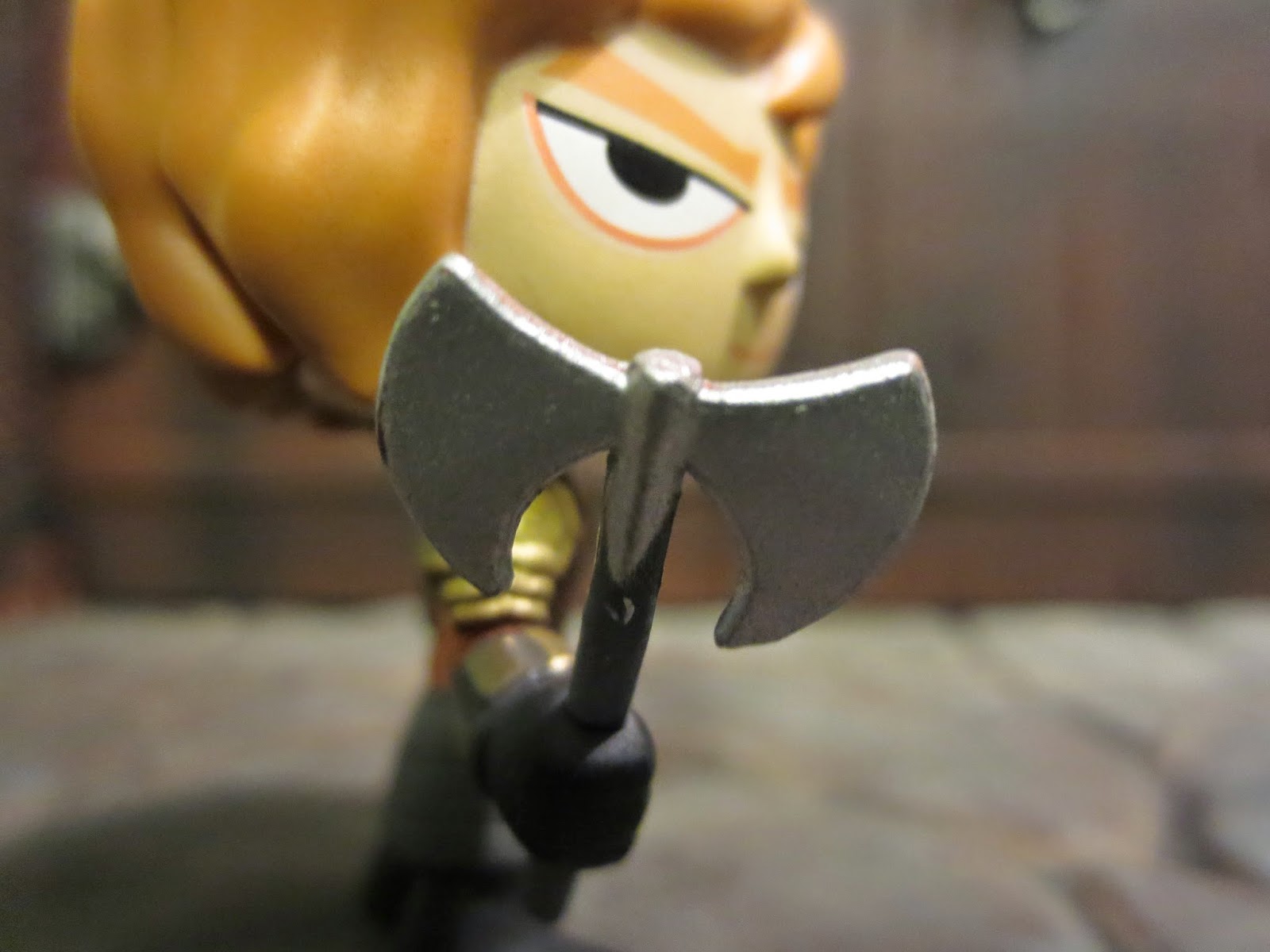 These guys don't come with any accessories. Tyrion's wielding an ax, but it isn't removable. 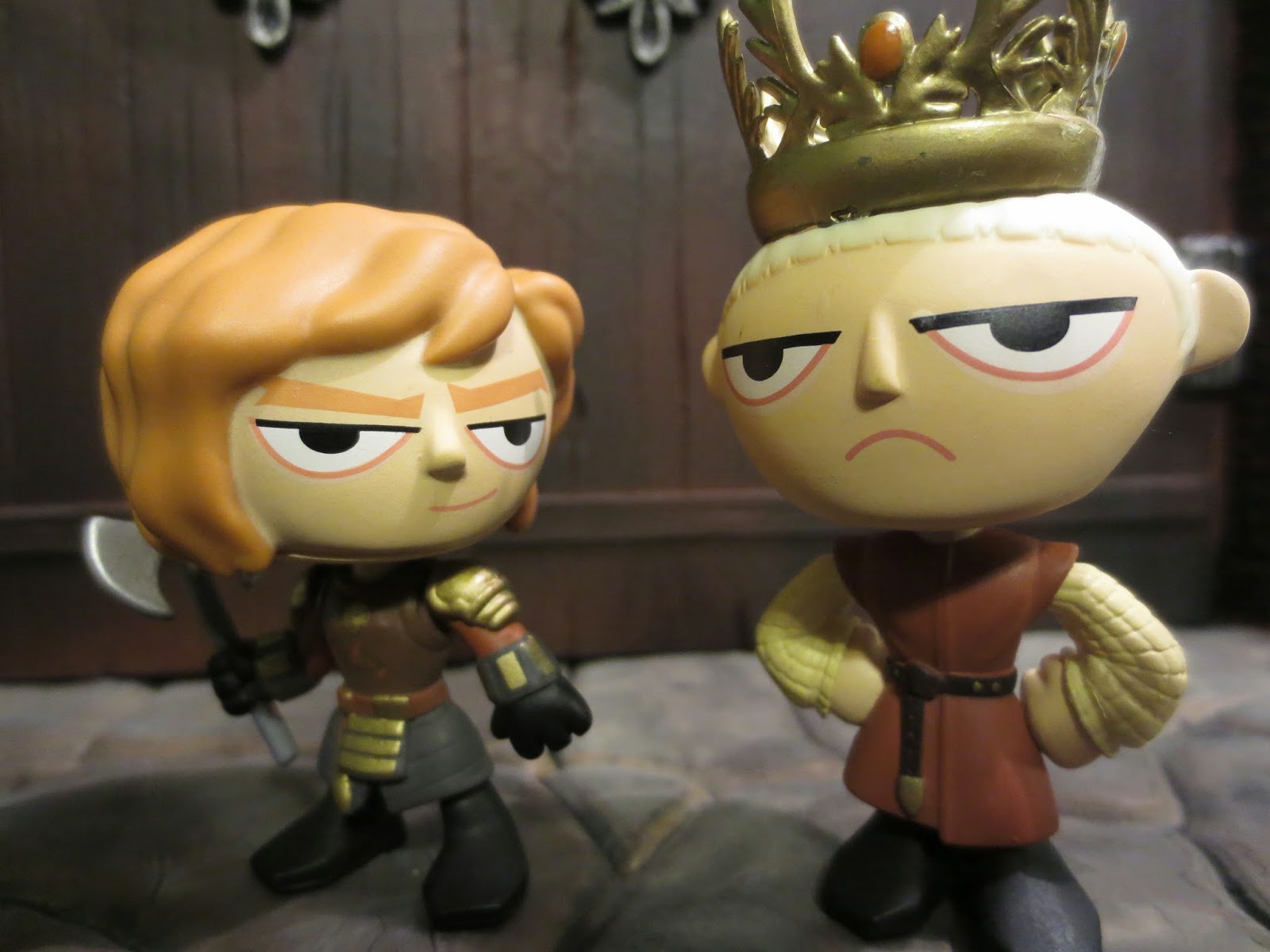 I really like these little guys as a novelty item, although the rarity of many of the figures means that I'm not even going to attempt to complete this set. Honestly, I probably won't buy anymore. They're fun, but if you really don't have the option of getting a full set what's the point? Tyrion is a neat little figure with some great paint and sculpting on the body but I think the likeness is way off, even for a stylized vinyl mini. I'm giving Tyrion an Eh and a 1/2 overall. If these sell well enough (and I'm sure they will) I hope that FunKo gives him another pass. Maybe with the scars on his face and a new sculpt, they can create a mini Tyrion that will be instantly recognizable to all fans of the world of Westeros. Oh, and about that second Tyrion I opened up? I traded him for a Joffrey Baratheon. My Tyrion quickly got snatched up by someone trading in a Robb Stark.

Interested in a Game of Thrones Mystery Mini of your own? Through Big Bad Toy Store you can order individual figures or an entire case. Entertainment Earth has a ton of Game of Thrones stuff, but they're all sold out of these right now. In the meantime, also check out our reviews of the Dark Horse Deluxe Ned Stark and Tyrion Lannister, and an older review of another Mystery Minis figure, Batgirl!