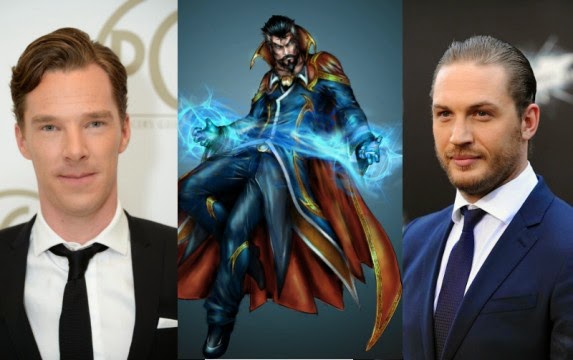 Add Benedict Cumberbatch and Tom Hardy to the list of critically acclaimed actors Marvel Studios wants to play Dr.  Strange.  Earlier this week we posted on Jared Leto potentially being up for the role, and earlier this year both Johnny Deep and Joseph Gordon-Levitt were rumored for the role of Sorcerer Supreme of the Marvel Cinematic Universe.  Considering Dr. Strange is a B Plus character of the Marvel Universe this is a pretty impressive wish list on Disney's part.  While Tom Hardy could definitely could play the part, I see Cumberbatch turning in maybe one of the more memorable performances in the MCU if he is interested and eventually cast.  The suave and exquisite demeanor that Cumberpatch carries to every role he takes would be a perfect fit for Dr. Stephen Strange.  What do you fan boys and fan girls think?  Out of the names mentioned who do you want to play Dr. Strange?

Thanks to Deadline for the Scoop!