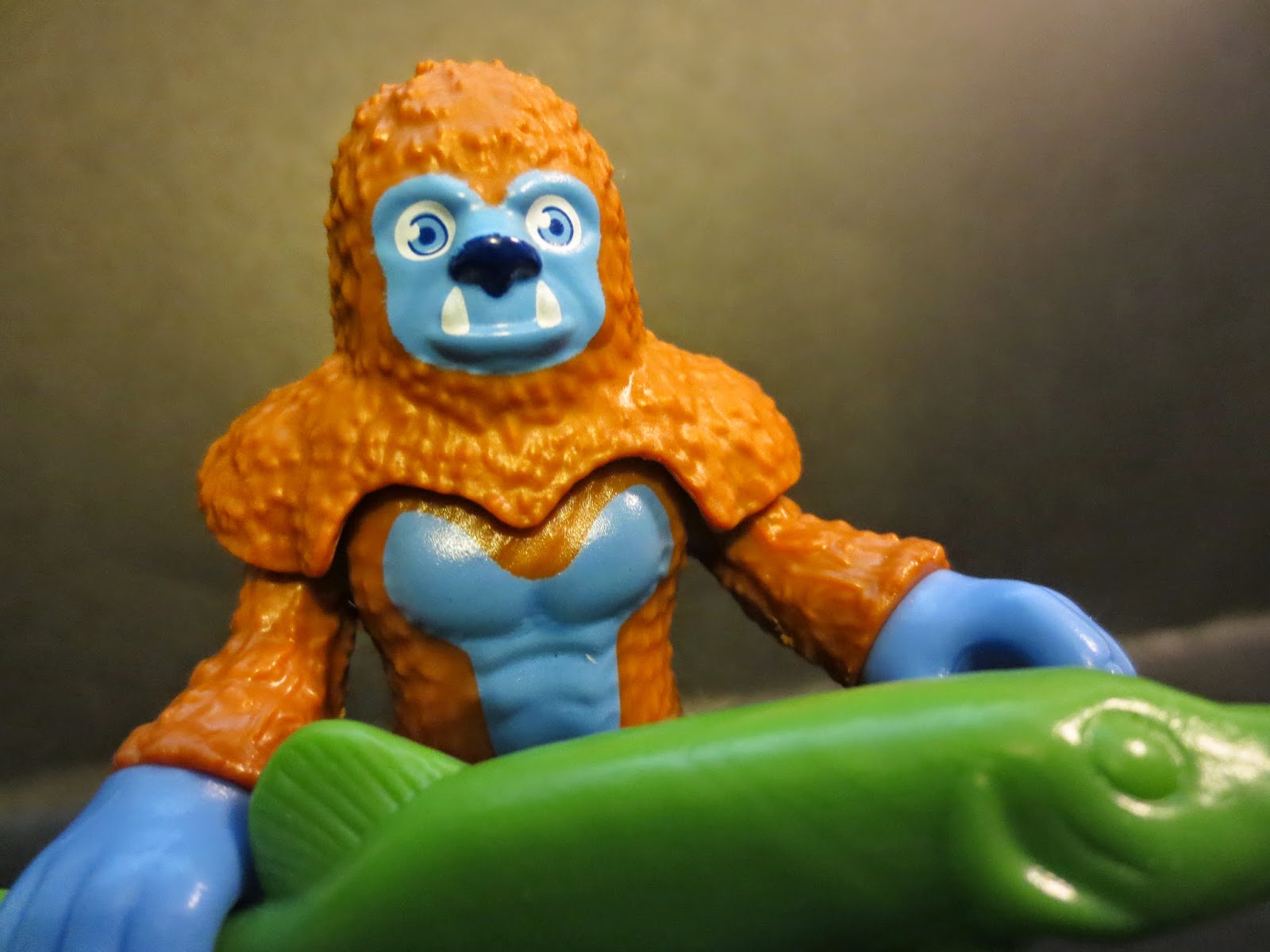 A few years ago I picked up a couple of the Batman Imaginext toys simply because I love Batman. Not many; I think I just grabbed a Batman, Mr. Freeze, and Two-Face. Two years ago when I learned that I was going to be a dad, I decided to start picking up a few more Batman Imaginext sets in the hope that I would have them  so I could play along with my future child. Well, little Adora isn't quite old enough to play with Imaginext yet (she's still getting the hang of Little People) but I've now gotten sucked into Imaginext based on their own merits thanks to a combination of three things: The MOTUC inspired vehicles, the Collectible Figures series, and Eric Stettmeier over at Toyriffic. Darn you all! Anyways, for those not familiar Imaginext are a toy series from Fisher-Price that are designed for the ages 3-8 crowd as pre-action figures. Of course, with the way kids are apparently leaving traditional toys in droves, these might be the only action figures we get. Fortunately, those of us who are parents and those of us who just recognize cool toys when we see them have gotten involved and have also began buying these things in droves. Honestly, Imaginext stuff is often more like the action figures many of us grew up with than most of the toys in the traditional action figure aisle. Last year Imaginext started doing the whole blind bagged thing that both Lego and Playmobil have already done with great success, and after seeing images of the third series of figures, I'm not hooked. Today I'm looking at one of the figures from series 2, a mysterious figure know only as "Bigfoot" to collectors. Why the mystery here? Find out after the break... 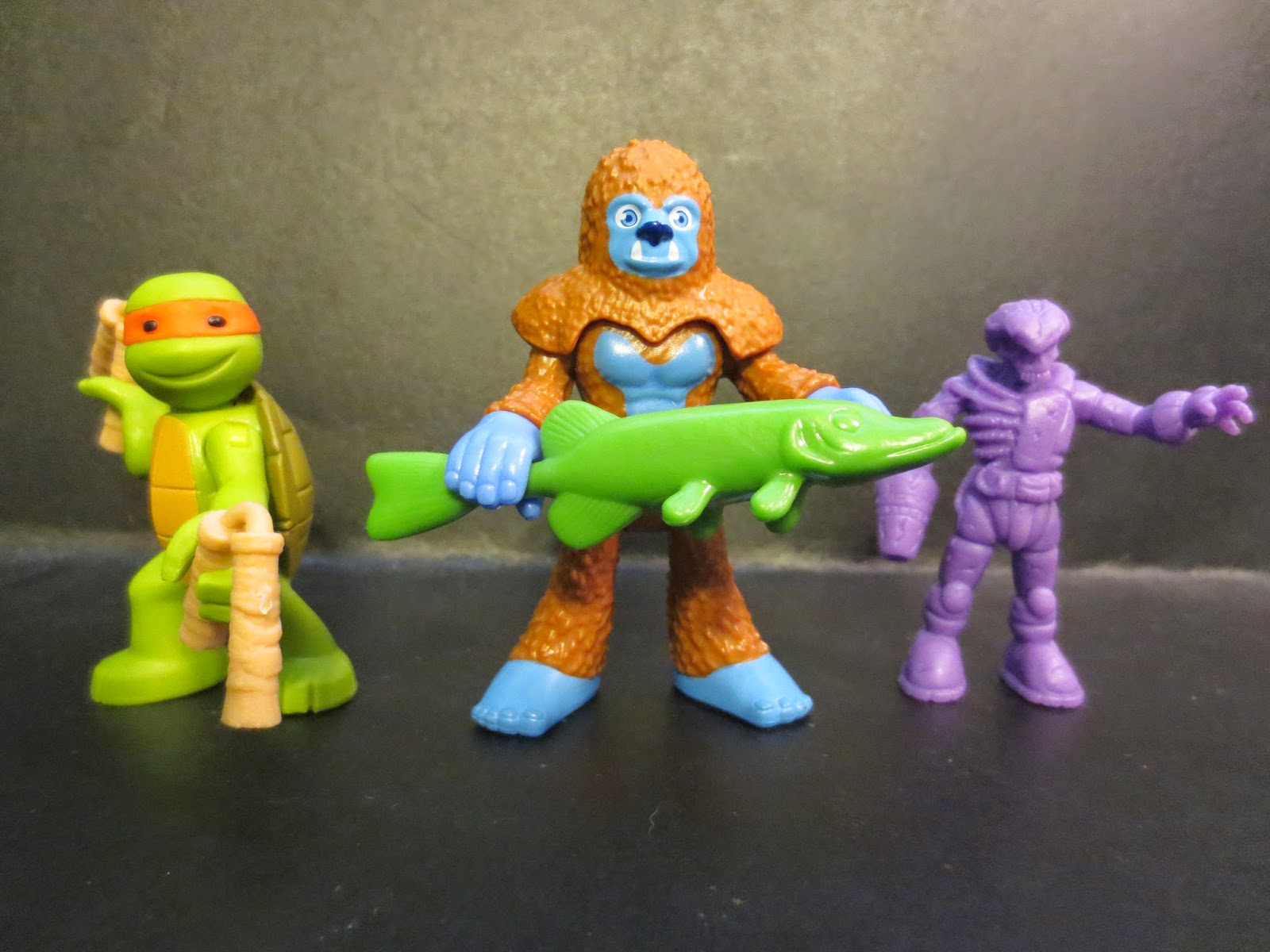 It turns out that this "Bigfoot" isn't really the actual Bigfoot, but just a guy in a costume. Lego has done this a number of times in their minifigure line with figures like the dinosaur man and the gorilla costume man, so it is kind of funny to see Fisher-Price tread the same waters. "Bigfoot" stands 2 7/8 inches tall without his mask on and has the same stylized look as the rest of the modern Imaginext figures; that means a smaller head and larger hands and feat. These guys are definitely an in-between size but would work well with some of Hasbro's Playskool Star Wars Heroes or Marvel Adventures figures. These guys are sold in blind bags, but on the top left rear of the bag is a stamped number that can identify what figure you're getting in the package. It seems like there are two different sets of numbers (my "Bigfoot" was number 31) so feel around to figure out which set a particular case is using. 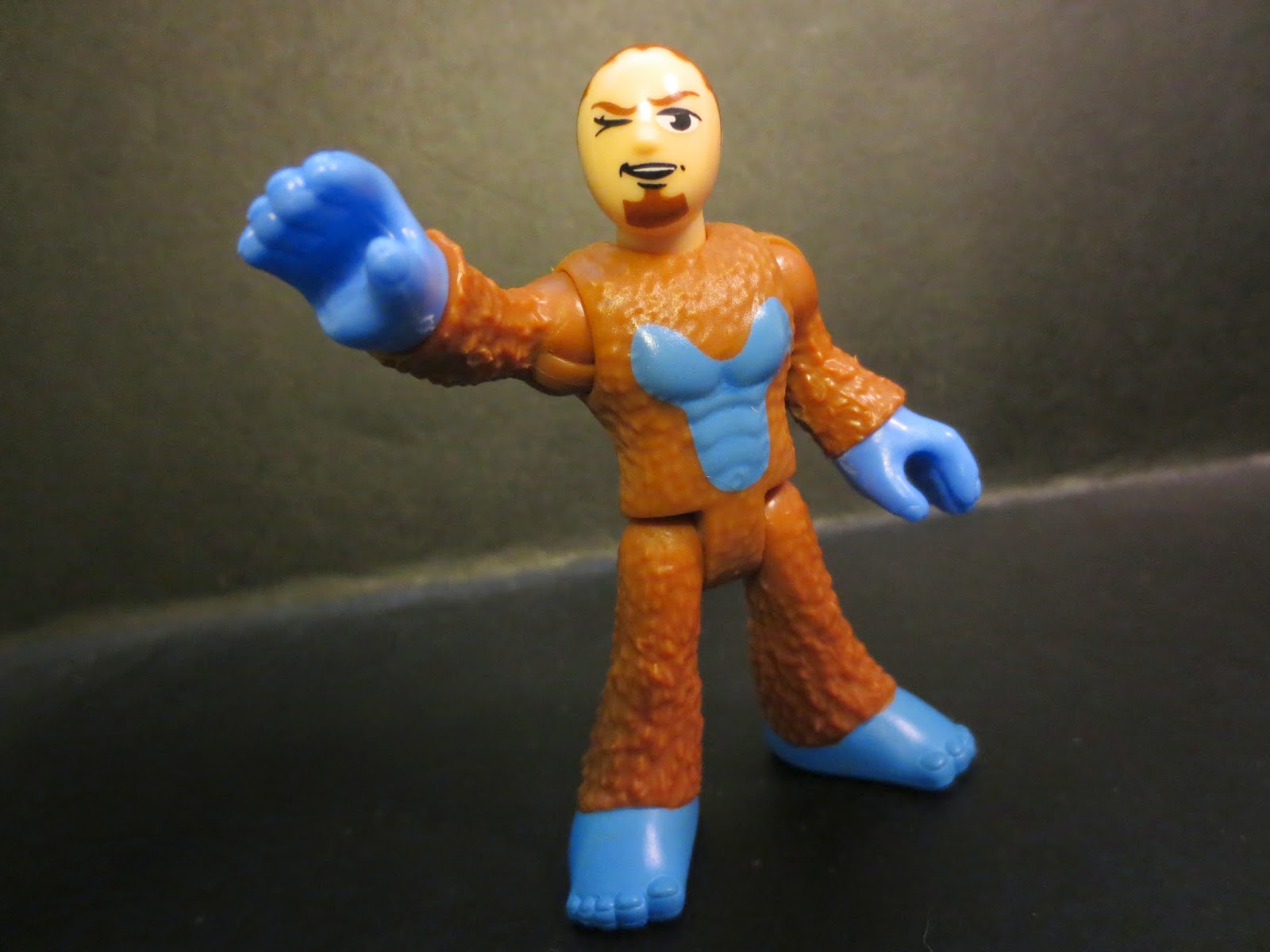 The Imaginext figures have fairly standard articulation that is designed to hold up to rough play. "Bigfoot" features: Hinged legs, swivel/hinge shoulders, swivel wrists, and a swivel neck. It's not much, but you can still have a lot of fun with these guys, particularly due to the wrist swivels and the faux ball-jointed shoulders. Both legs move as one unit (kind of like a Playmobil figure) so no kicking for these guys. They do sit nicely in most vehicles, however. Most of these figures have pretty simple sculpting, but there's actually far more unique pieces here than on something like a Lego minifigure or a Playmobil. "Bigfoot's" body is covered with a sculpted texture that nicely emulates the furry costume this guy is no doubt wearing. The hands are nicely sculpted to look like large gorilla-like gloves (capable of grabbing Slim-Jims, no doubt) and the feet have discernible toes on them. In the middle of the chest is a hairless portion with some muscle definition that nicely captures the look of a large, ape-like creature. All of the facial detail is simply painted on except for the nose and ears which are small sculpted elements. 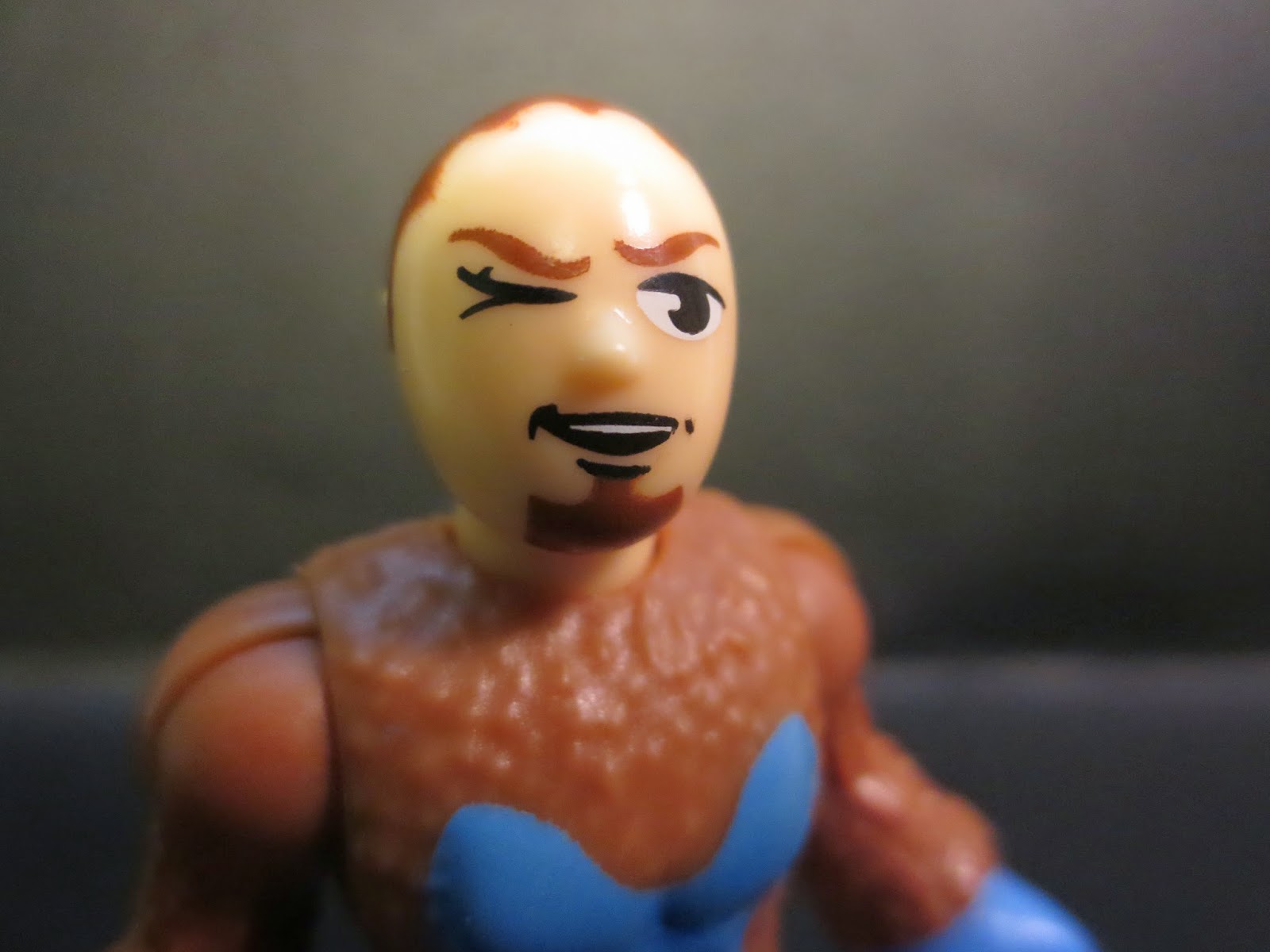 "Bigfoot's" body only has two paint/plastic colors: Light brown for the furry body and a light blue for the hands, feet, and chest. Everything is pretty neat and clean as most of the figure is molded in the appropriate colors with the only paint being some blue for the feet and the chest. Since the hair and facial expression is accomplished through paint, it's important that everything looks nice and even there. Fortunately, it does. I like the hair and the little goatee, but I love the expression on "Bigfoot's" face! He's winking with a half cocked grin as if he knows that he's playing a prank on everyone by running around in a Bigfoot costume. Fun stuff! 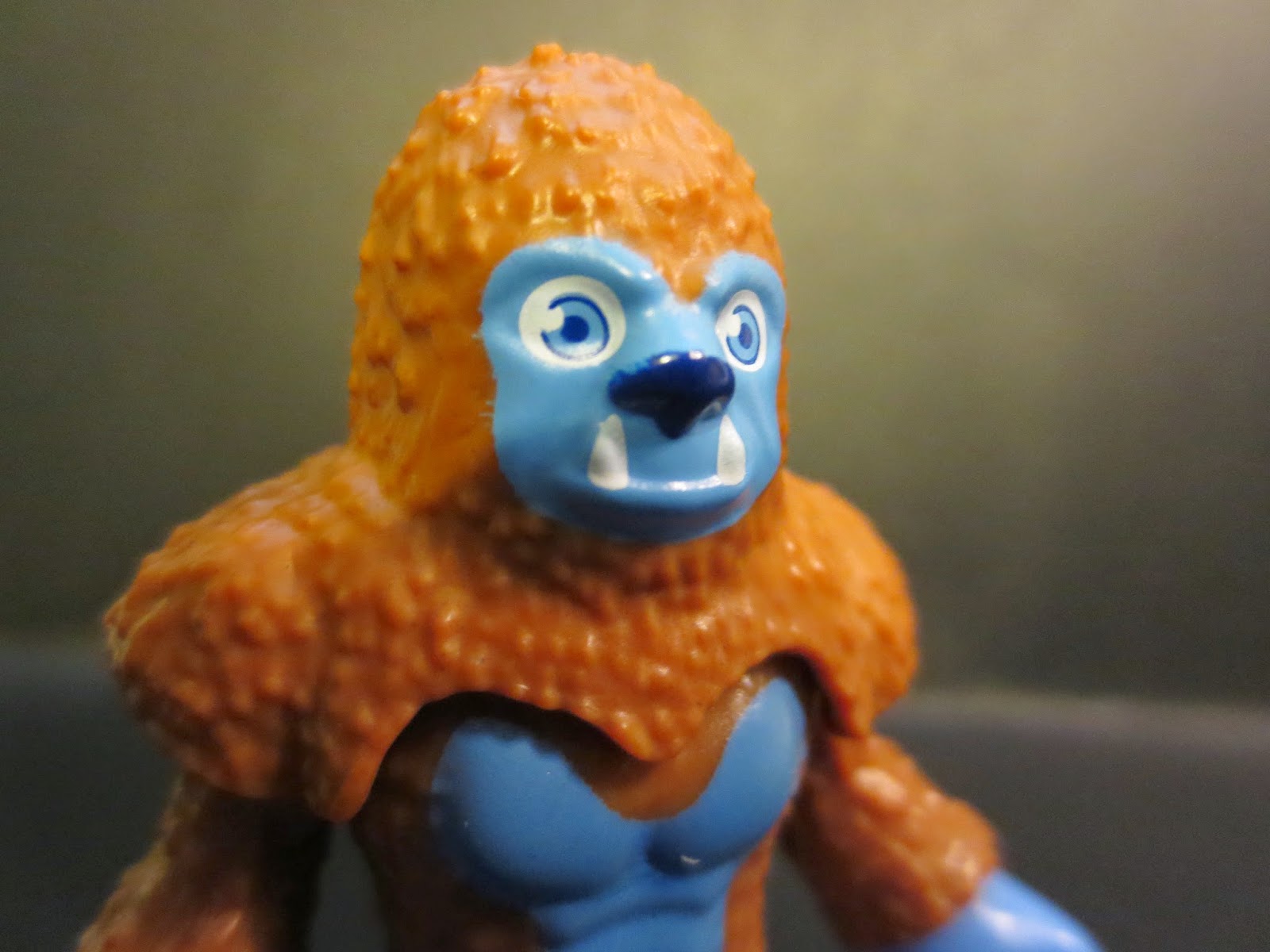 "Bigfoot" comes with two accessories: His Bigfoot disguise mask and a large fish. The mask is key to his look and fits very snugly over his head and shoulders. It's a bit tight, so younger Imaginext fans might have trouble getting it off. I've taken it on and off a few times, however, and haven't noticed any problems with it damaging the figure's painted face, so all seems to be well. The mask has the same furry texture as the figure's body and features a Bigfoot face sculpt on it. It looks a little silly, but then again this is a guy in a costume. The eyes, nose, and teeth are all painted quite well and give this costume a charming countenance. 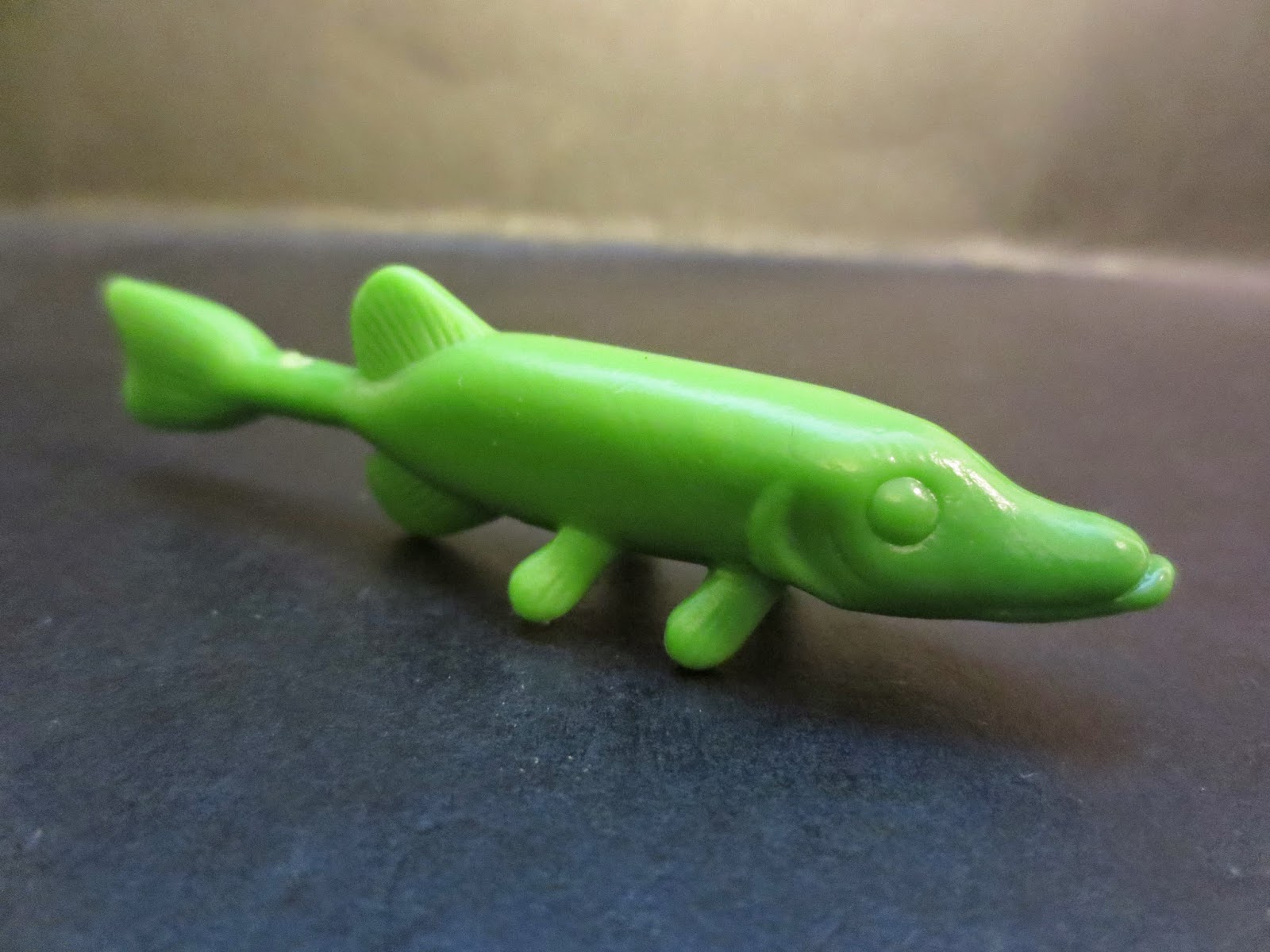 The fish is a simple green molded piece with some cool details like gills and ridges on the fins. It looks to me like a pike due to the placement of the fins and stuff. "Bigfoot" can hold it in either hand, so I guess he either carries it as a snack or he uses it as a weapon because he has watched too many Jackie Chan movies. 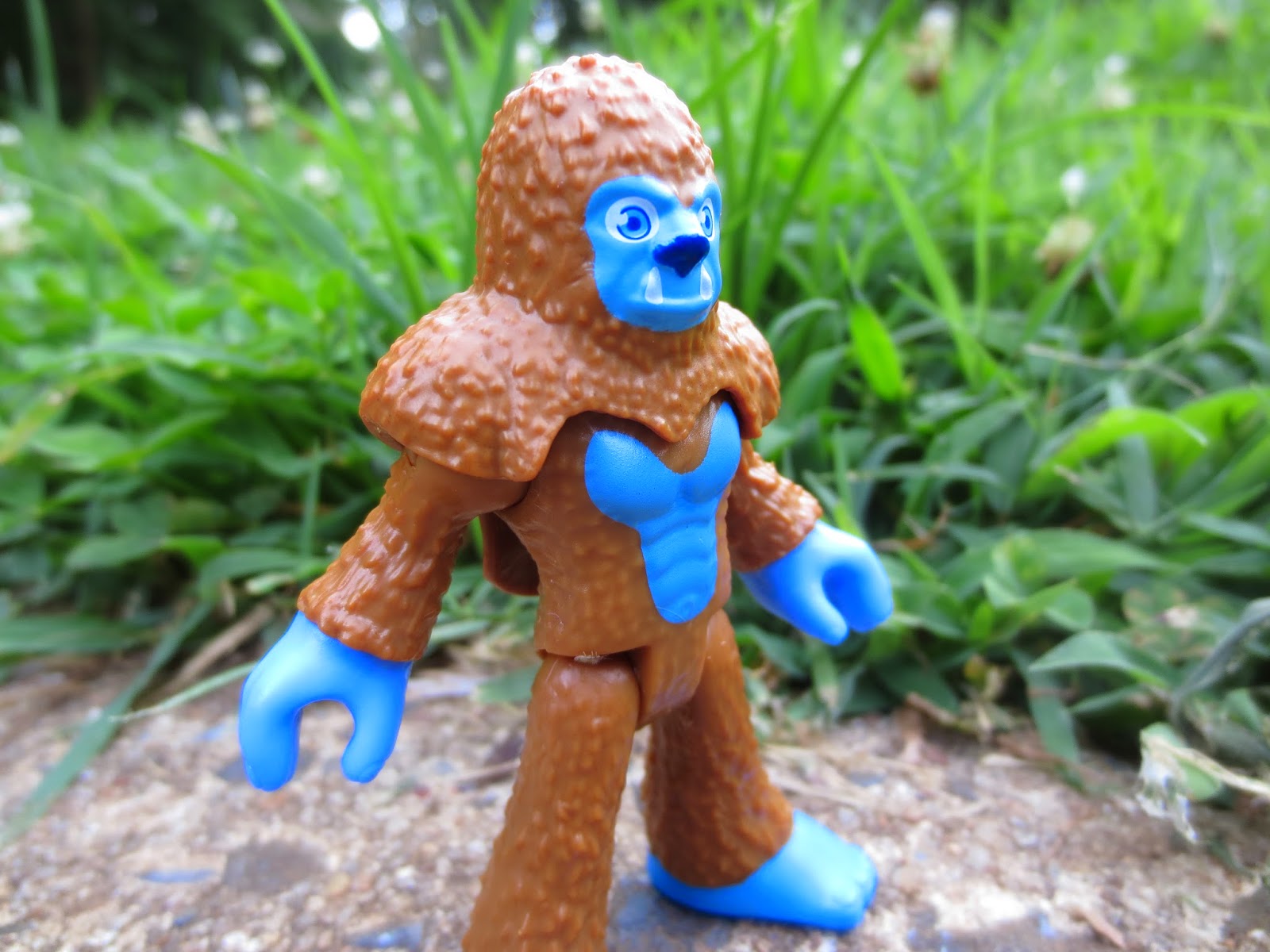 This wasn't my first Imaginext figure (I've had a fair number of the Batman and DC Superheroes figures for a few years) but this was my first nonlicensed figure from the line, and you know what? I love it! These really are fantastic toys that remind me quite a bit of the action figures I had as kids. Sure, they're a bit smaller, but they have a wide variety of characters, vehicles, accessories, and even playsets. All of the stuff that most toy manufacturers tell us they can't do at retail, Imaginext is doing. These guys only run around $2.99 each and they're well worth picking up. I'm giving "Bigfoot" here a Great rating. I'm not the biggest fan of the silly Bigfoot face on the mask or the blue chosen for his other body parts, but darn if this isn't a sharp, fun toy. I can't wait to take wilderness photos and randomly hide him in the background all the time with a permanent blur effect. Just because. 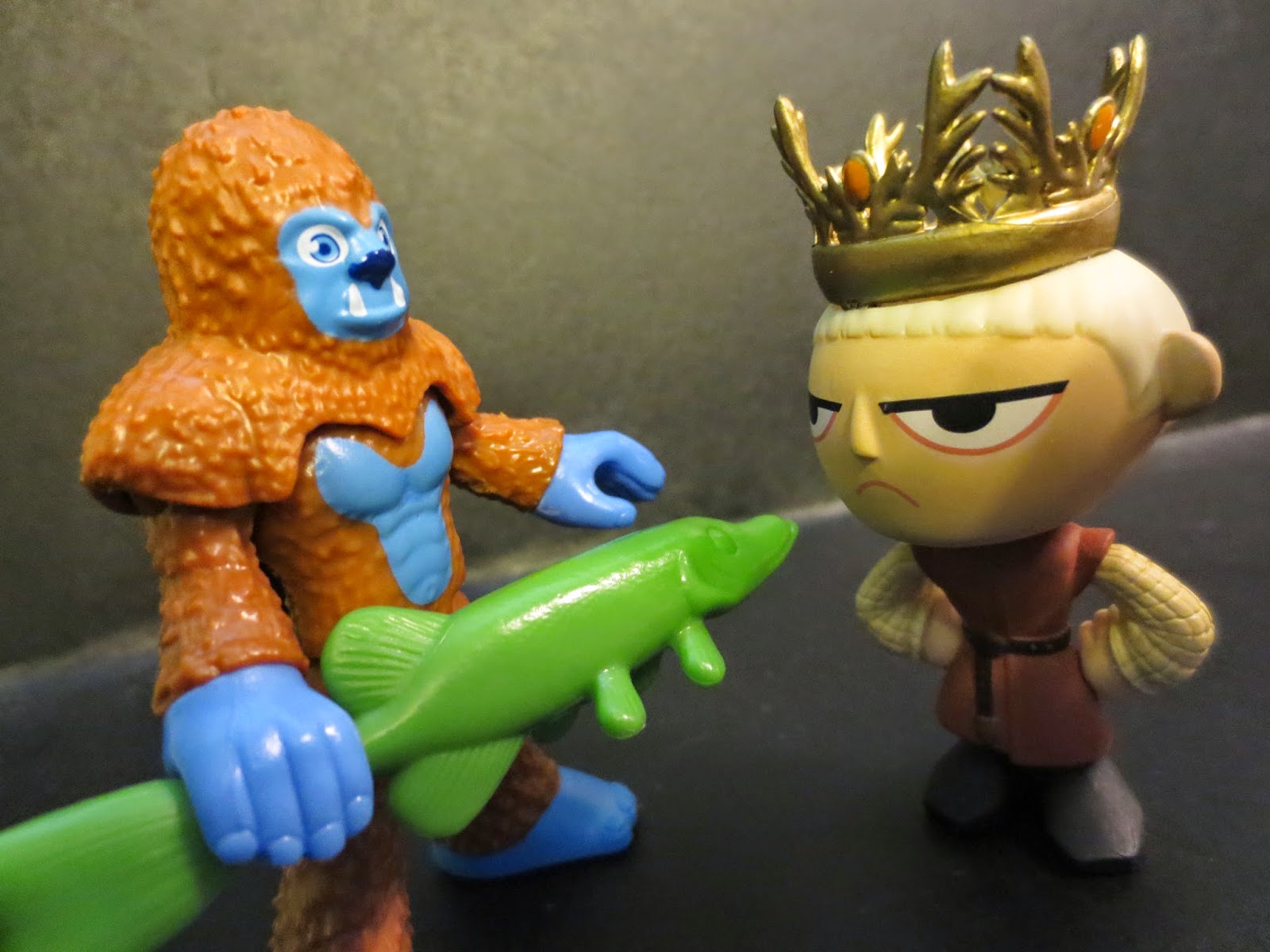 Want to check out more reviews of Imaginext stuff? Then here's what we got:
DC Superfriends Imaginext by Fisher Price
The JokerThe Joker & Harley Quinn