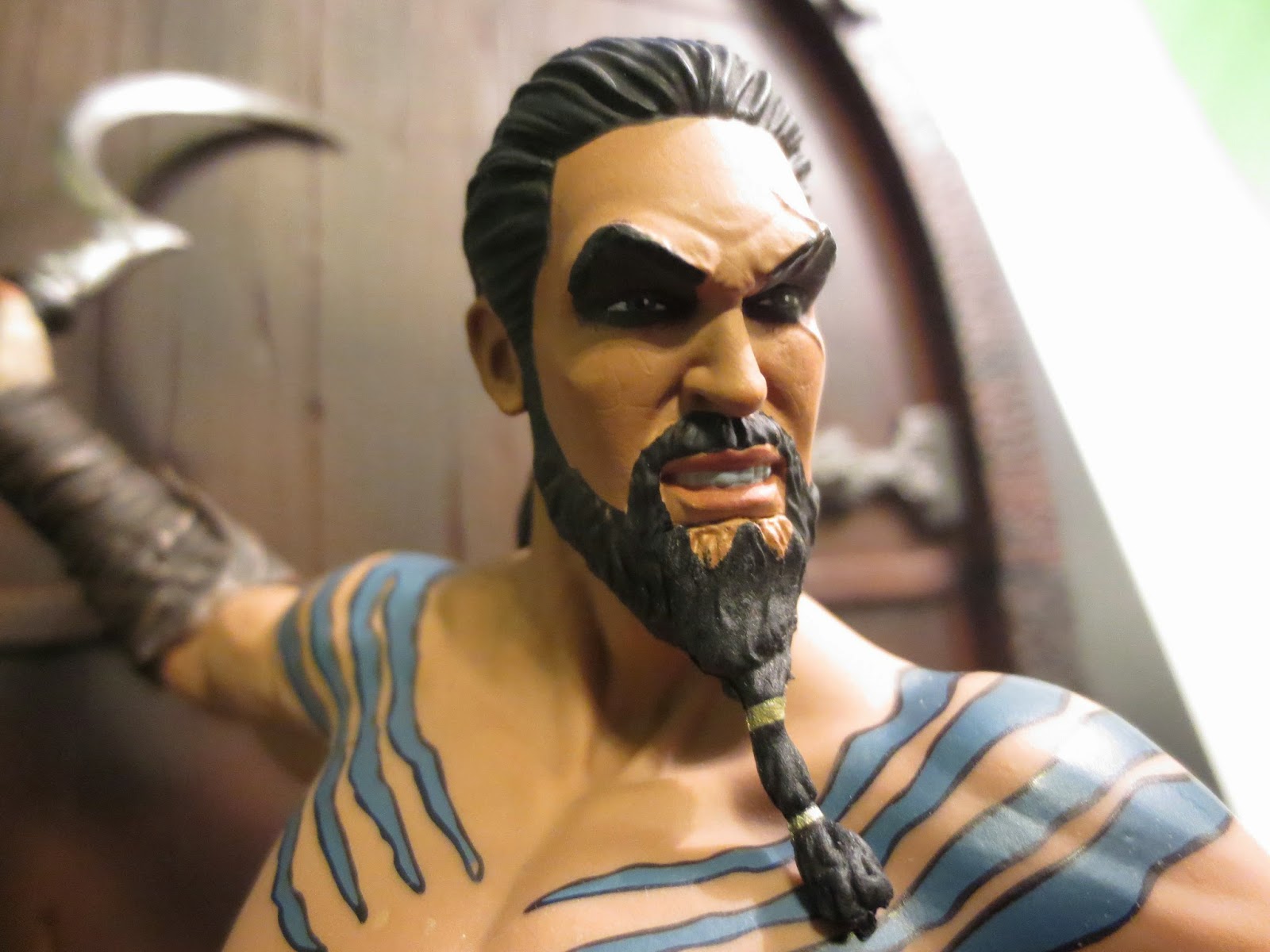 Until I started working on this review, I had no idea that Jason Momoa of Conan the Barbarian, Stargate: Atlantis, and Bullet to the Head played Khal Drogo in the HBO television series Game of Thrones. The beard and make-up really threw me off! Anyways, if you want my opinion as to which figure in Dark Horse Deluxe's Game of Thrones line is the best, then Khal Drogo is the answer. Just looking at this guy definitely shows how a statuesque figure can sometimes appear more dynamic than even the most well articulated action figure. I'm a guy who likes with my toys so I'm not wanting all of my toys to sacrifice articulation for sculpt, but every now and then I'm completely good with a miniature statue. And my word, Drogo here is an excellent and fearsome miniature statue. Drogo is the khal, or leader, of a large tribe of the Dothraki. As the khal, Drogo leads his khalasar in battle, setting an example for them in courage and ferocity; that's perfectly displayed by this figure's excellent pose. Ready for a closer look at Khal Drogo, Daenerys Targaryen's "sun and stars?" Then join me after the break.... 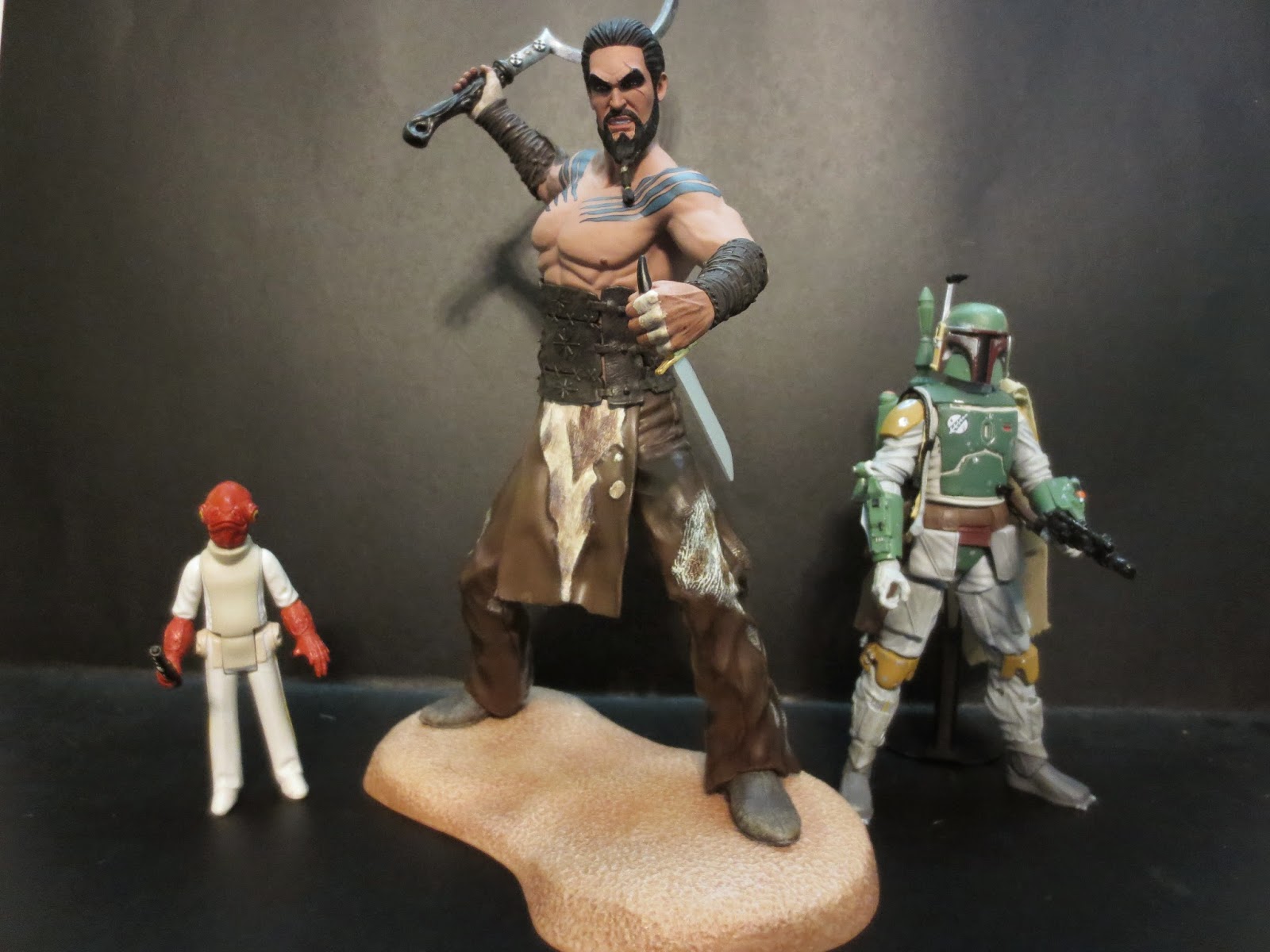 Khal Drogo is really, really tall. The figure stands 8 1/4 inches tall not including the stand (that actually makes him closer to 8 3/4) but he's also in a wide legged stance, so he'd even be a little taller if he were standing upright. Jason Momoa is a fairly tall guy in real life (6' 4") so this figure's portrayal of the massive Dothraki Khal only seems to be slightly exaggerated. While these figures are done in a fairly realistic style similar, there is a bit of a slightly stylized look that gives Drogo just a hint of comic bookishness. And no, unfortunately these guys will not blend together with your FunKo Legacy Game of Thrones figures. They are way too large. 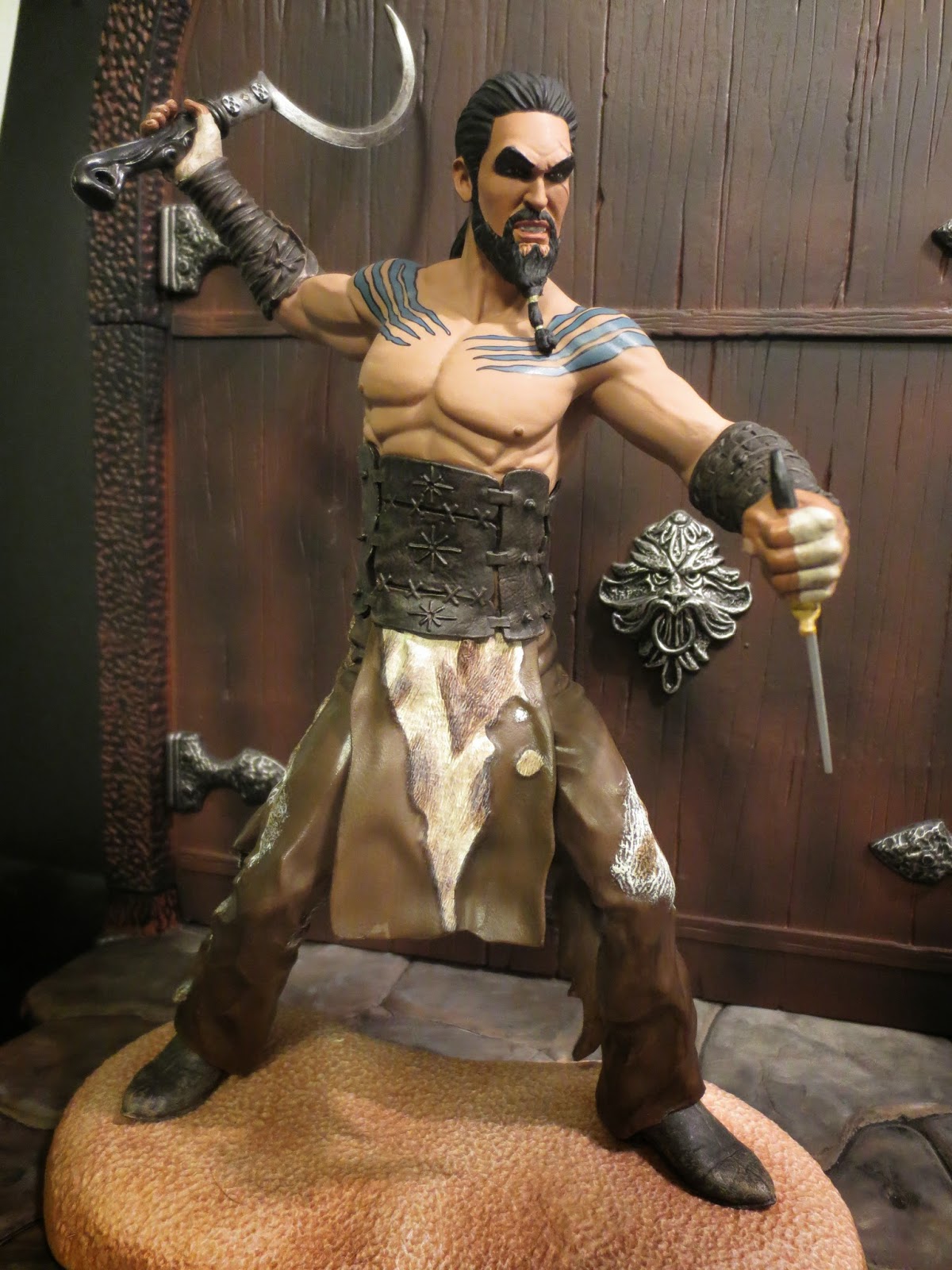 These figures have no articulation whatsoever, so you might be more inclined to refer to them as mini statues or stactions. Since they have no articulation, the pose chosen for the character is of particular importance and fortunately Drago's doesn't disappoint. With his arakh raised high in his right hand and a dagger in his left, Drogo is in a battle stance from one of the many times when he fought and killed someone on the show. He really does look pretty snazzy. 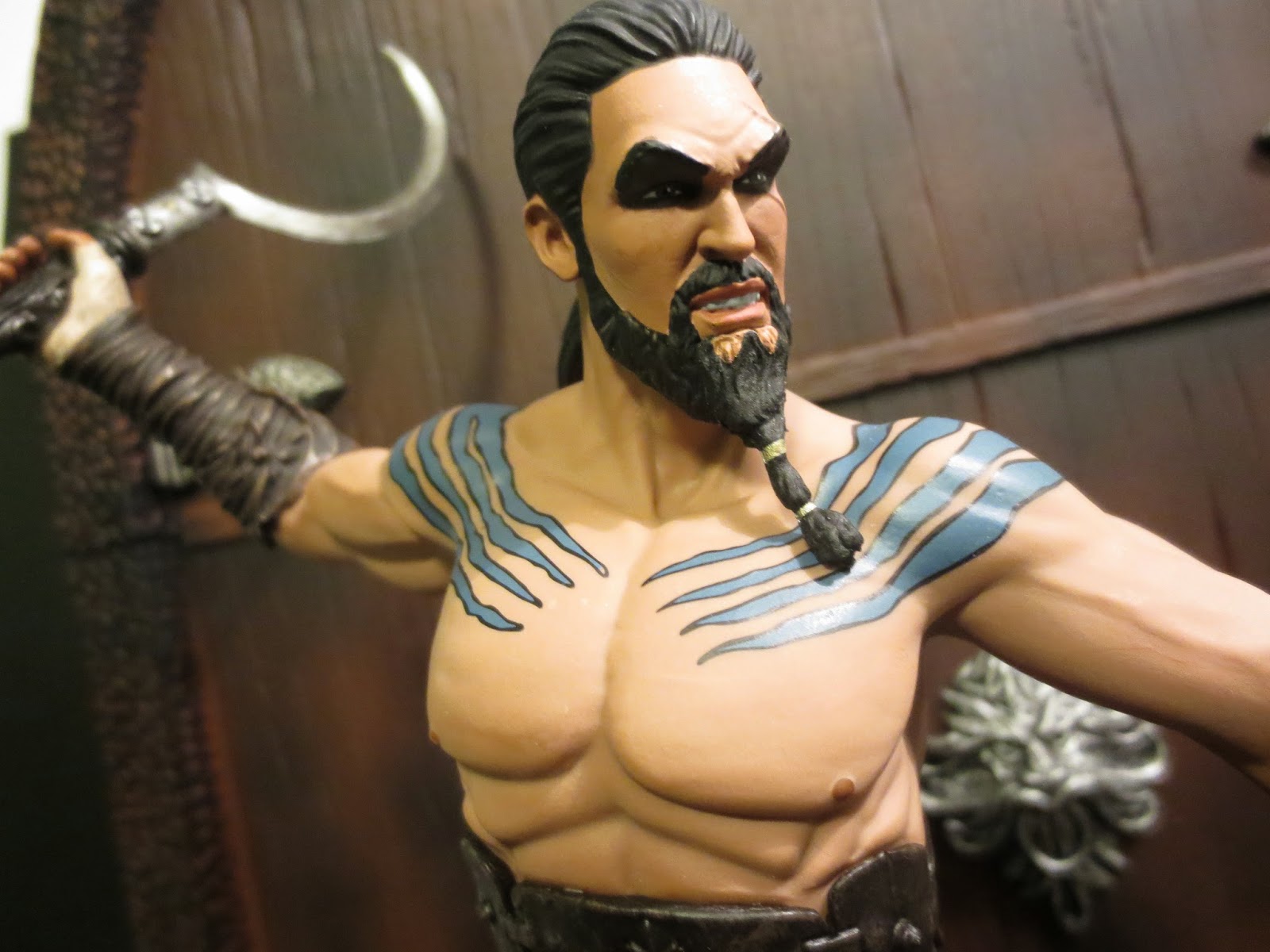 Drogo has the best sculpting of any figure in the line so far. Looking at his face, there's no mistaking who this is. Some of the details might be just a little soft, but not enough to really affect things. The dude's absolutely ripped when it comes to his muscles (although I expected more scars) but to the chagrin of all you wannabe Khaleesis out there, Khal Drogo's abs are covered by some excellent light armor. His clothing is really well done; it's just a hodgepodge of random handmaid leather elements, but it all looks great, particularly the wrappings on his forearms. Drogo has his long ponytail that has never been cut hanging down his back. It's made from a soft, rubbery material to keep it from breaking, although this also means less crisp detail. Since the TV show didn't include the infamous bells Dothraki warriors wear in their hair, they're not included here either. Know why Drogo had no bells in his hair on the TV series? According to actor Jason Momoa, they constant jingling just ended up being more comical rather than menacing. That makes sense and kind of makes me think of the guy with the squeaky shoes in Kung Pow: Enter the Fist. 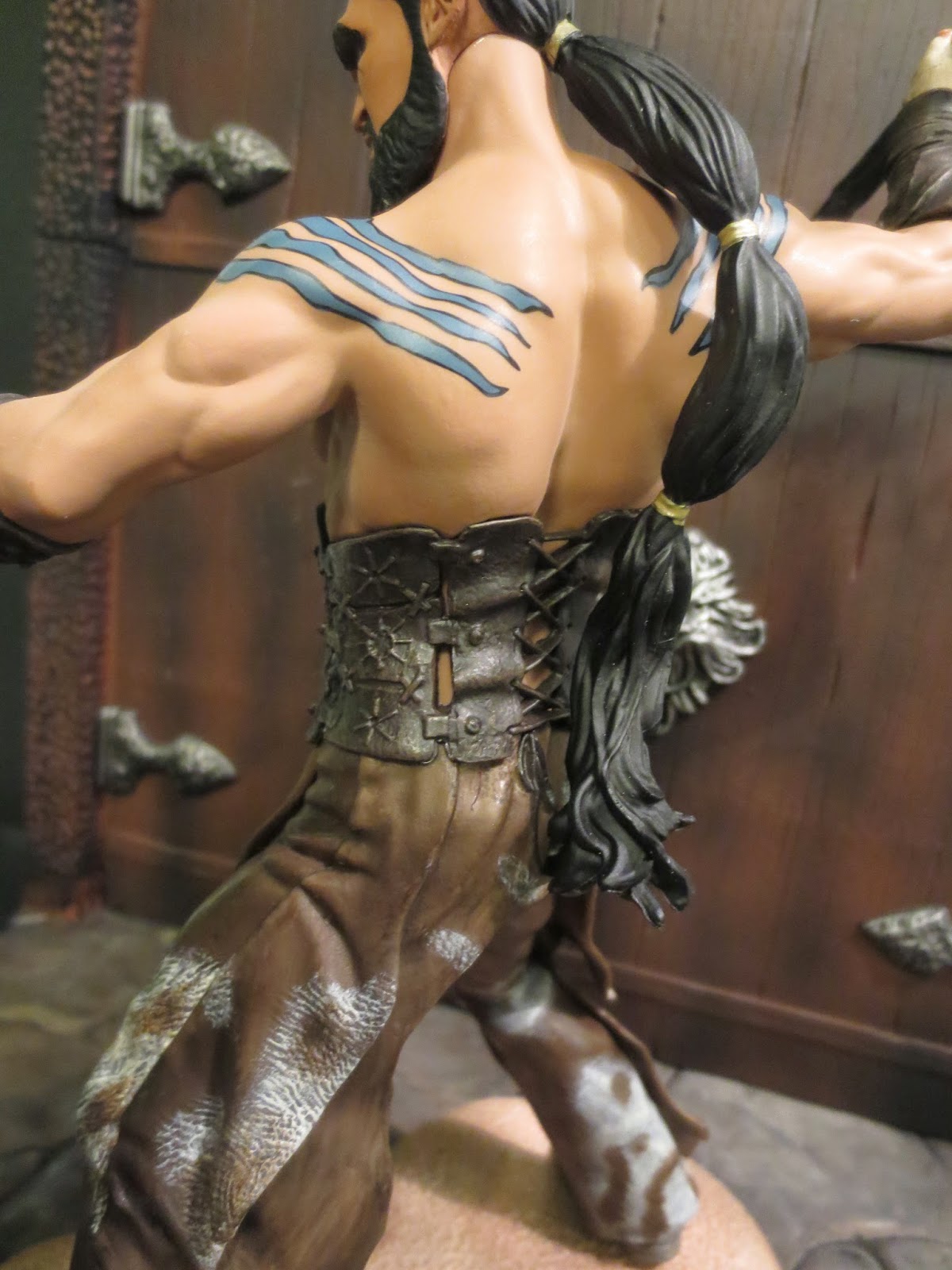 The paintwork is also nothing to scoff at as it is neat, clean, and features a fair bit of cool detail. His leather clothing has a mixture of drybrushing and wash techniques to help give it a worn, weathered look. His boots also look as if they're covered with dust and dirt from long treks through the Dothraki sea. The tattoos on his shoulders are nice and clean with the bright blue really adding a lot of visual flair to Khal Drogo's appearance. I definitely think he has the best face of any figure in this line so far, particularly with the excellent work done on the eyes. Interestingly, Khal Drogo does come with a legitimate accessory: his arakh. It is actually packaged separate from the figure/ statue in the package and can be held in Drogo's right hand. While figures like Jon Snow and Ned Stark have come with their sword blades packed separately, Drogo's arakh is a legitimate full accessory that could be used by another figure in a similar scale if you wanted to do so. It fits pretty well with lines like MOTUC. The arakh has dark drybrushing over the silver blade and has some rather ornate deals on both the wood-like handle and the bottom of the blade. 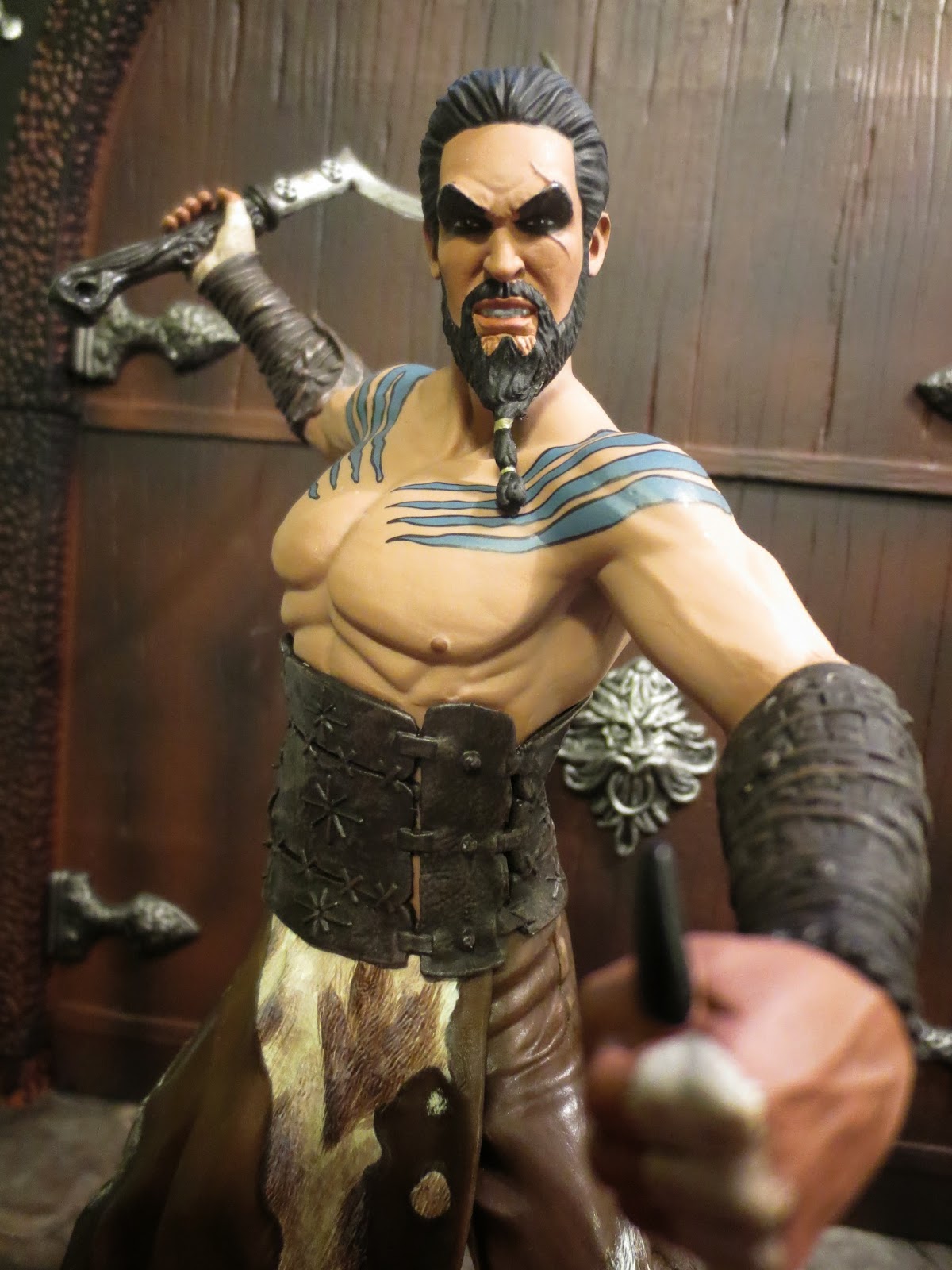 Once again, I totally realize these statues aren't for everyone. Lots of folks really want articulated toys (as do I most of the time) but that just isn't what this line is about. FunKo is offering Khal Drogo in the second series of their popular Game of Thrones Legacy line, so some of you might just have to wait for that. For fans wanting a cool ministatue at a fairly reasonable price (all of these can be available for well under $25 if you shop around) these should do the trick. With a rather good likeness, great paint and sculpting, a nice pose, and an actual separate accessory, Khal Drogo is definitely the best figure this line has to offer so far. He's really good and makes a rather menacing addition to a fantasy shelf. I'm giving him an Epic. So, does anyone know how to say epic in Dothraki? 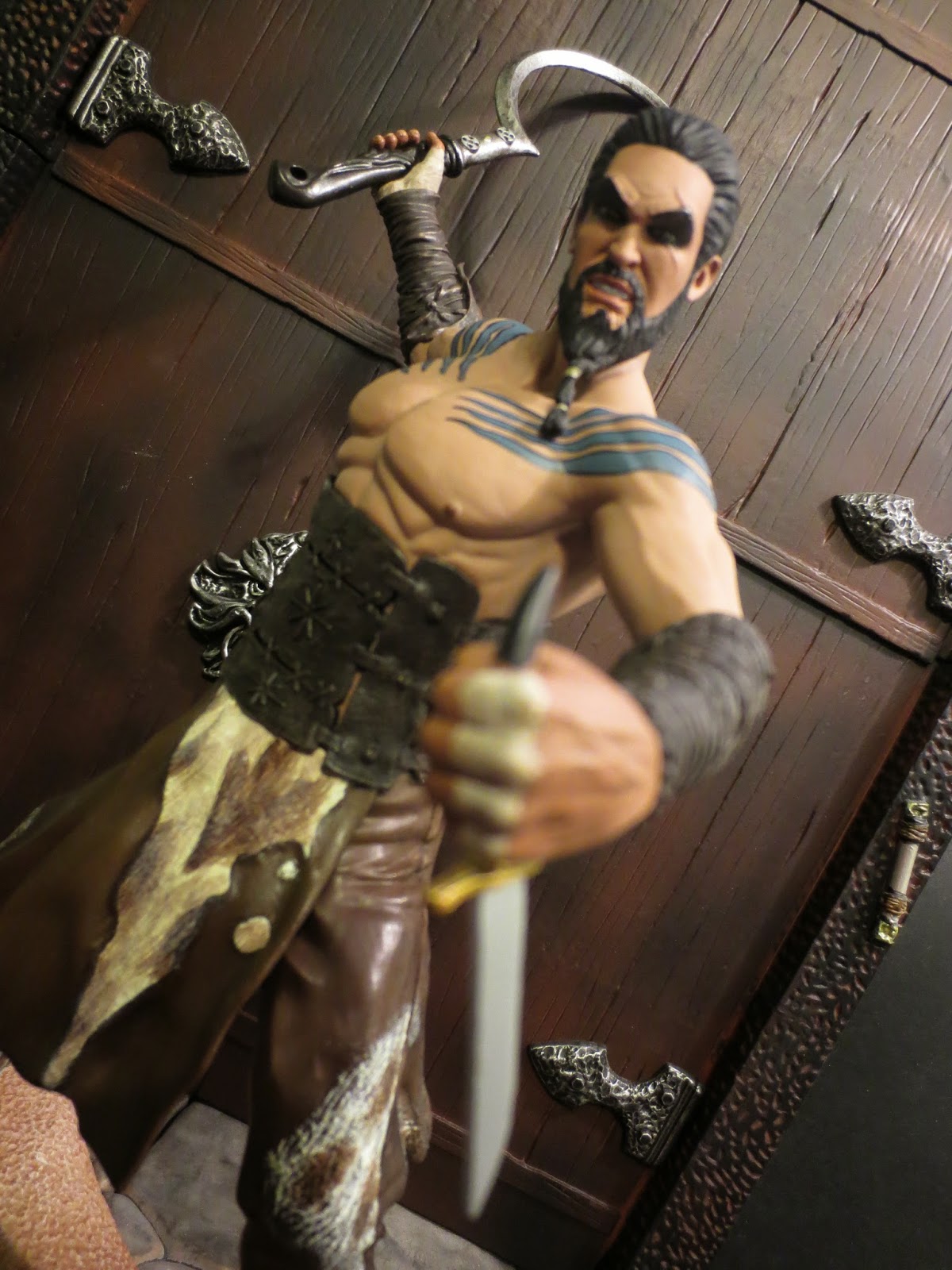 If you're interested in a Khal Drogo of your own, head on over to Big Bad Toy Store or Entertainment Earth and pick one up today! I've also reviewed a couple of other Game of Thrones figures from this line as well as one of the FunKo minis. Check them out below: