Action Figure Review: The Rocketeer from ReAction by FunKo 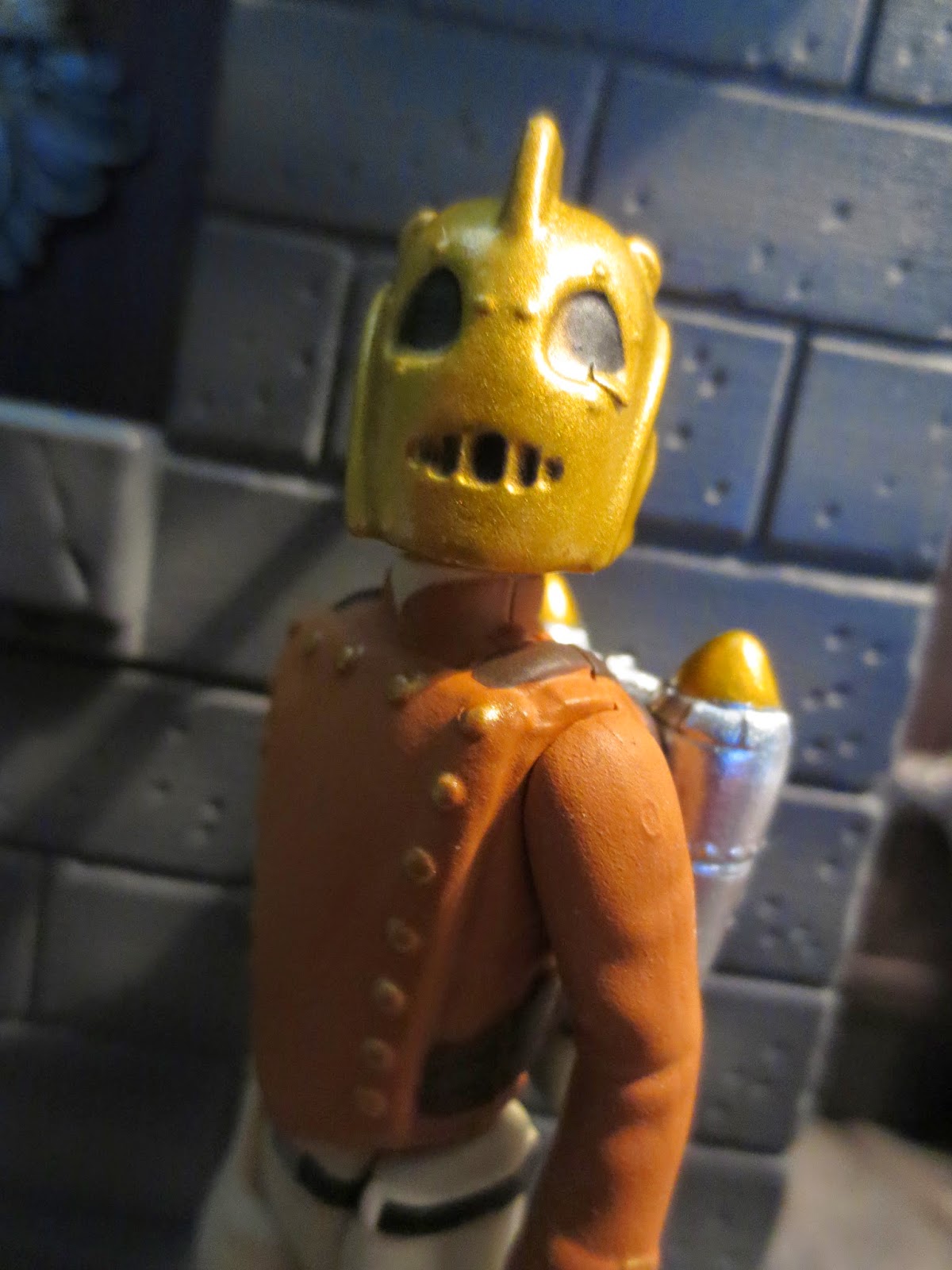 While I wasn't born until the early/ mid 1980's, I really do have an affection for action figures that are designed in the vintage Kenner style. When I got into collecting Star Wars: The Power of the Force in 1995, I also started scouring antique shops and toy shows for the vintage Star Wars figures from Kenner. There's something about those toys that, despite how basic they are, makes them feel rather magical and special. FunKo, the makers of the popular POP! vinyls and the Game of Thrones Legacy action figures, announced earlier that their partnership with Super 7 would continue beyond the popular Alien series into other licensed properties. Today's figure review is the Rocketeer! Inspired by the 1991 film that was based on a character created in 1982 who was inspired by the adventure heroes of the 1930's and 1940's, the Rocketeer is an interesting choice for an action figure done in the style of action figures from the late 1970's. The packaging art and the Walt Disney legal info definitely tie this product as based on the Joe Johnston film, so this version of Cliff Secord is based on Billy Campbell's portrayal of the jet pack wearing hero. Ready for a look at this really cool throwback toy? Then join me after the break... 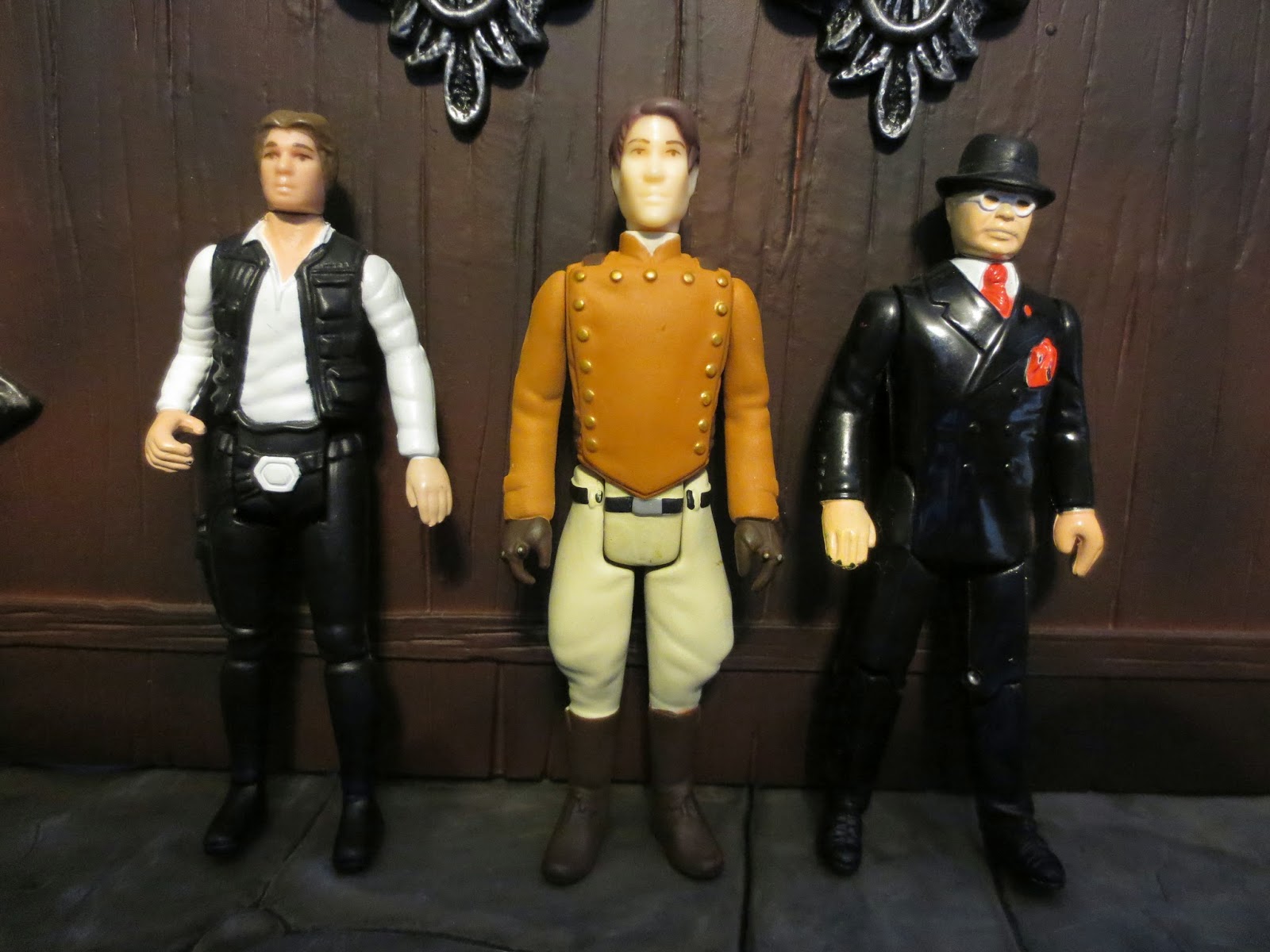 Interestingly, the figures collectors commonly refer to as 1/18th scale or "3 3/4 inches" have been creeping up in size over the past few years. FunKo has nicely brought their ReAction figures back in line with the old vintage classics, meaning that Cliff stands just a little over 3 3/4 inches tall. Just in case it isn't clear, please remember that these are intended to look like toys made sometime between 1978 and maybe 1982 or 1983. They're very simple and rarely do they look like the actor that portrayed them on screen. Continue to think Kenner's earliest Star Wars efforts or Mattel's Clash of the Titans, and you'll be fine. The packaging is also a very special part of these figures. The Rocketeer is released on a blister card where is is floating loose in the blister with his weapons have their own little slots. No tray here! The front of the card features the gorgeous art deco styled The Rocketeer movie poster while the back has an image of the Rocketeer in all of his gear. I liked the packaging so much that I actually slit the blister just so, enabling me to remove the figure with minimal damage to the package. 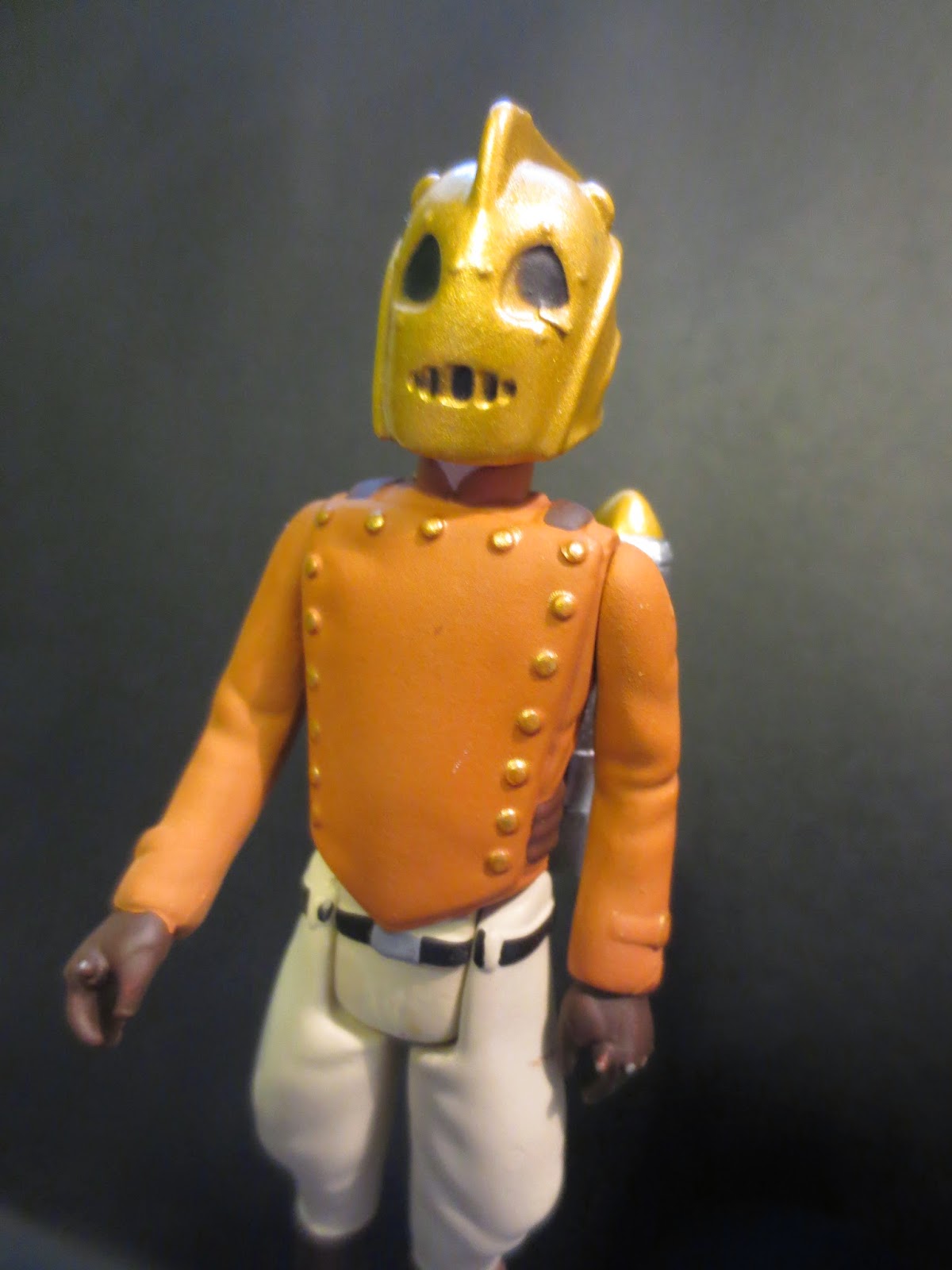 Articulation is rather basic on these. If you're familiar with the Kenner five, then you know what to expect: swivel hips, swivel shoulders, and a swivel neck. That's it! Yes, it absolutely limits the amount of poses your figures can take but it also keeps these guys truly in line with their ancestors. The figure feels rather sturdy and the swivel joints all work perfectly fine. 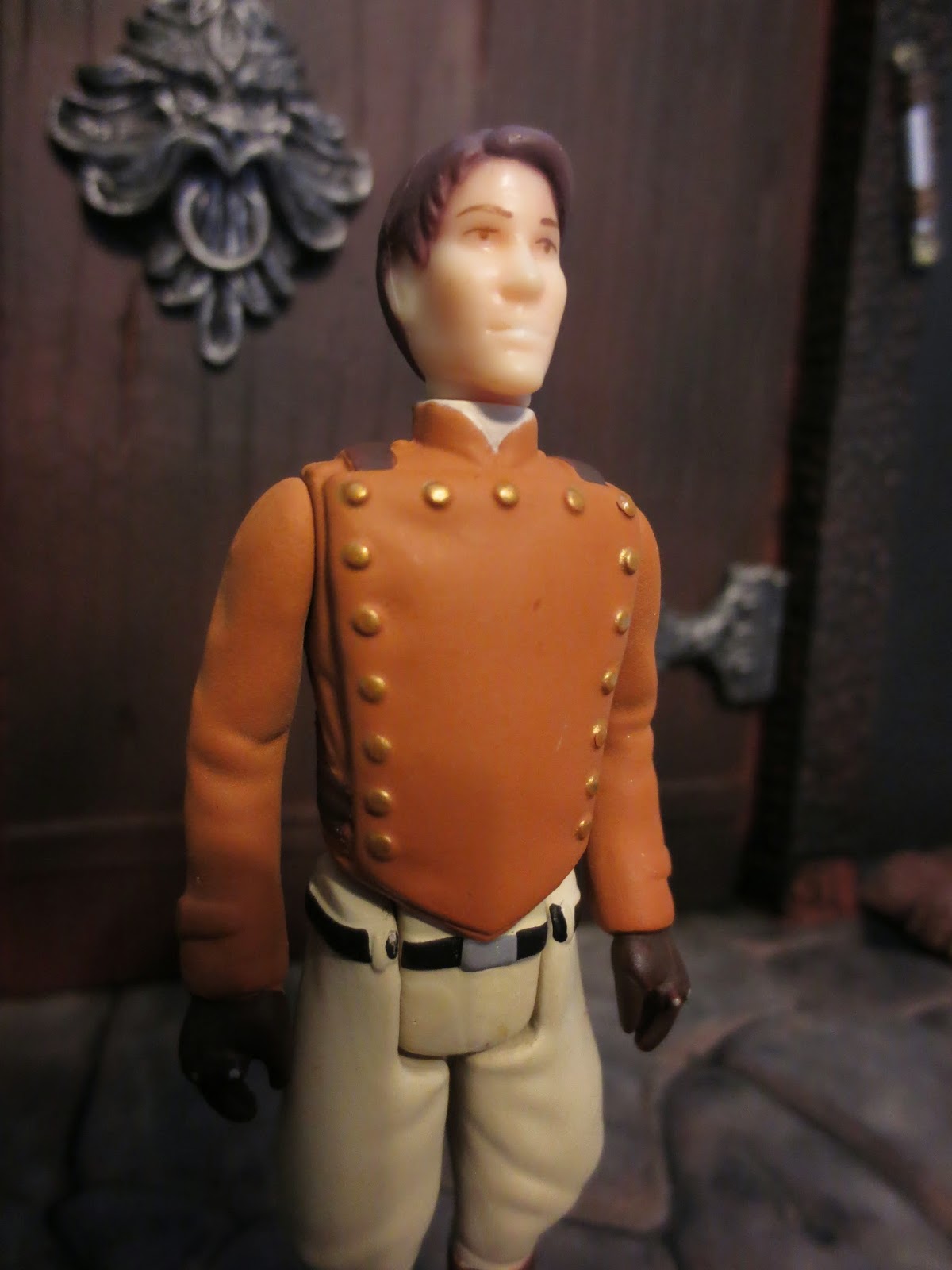 I like the sculpting of this figure and feel that FunKo and Super7 did a great job in capturing the amount of detail that the Rocketeer would have had if he had been released around 1979 or 1980. The headsculpt looks as much like Billy Campbell as Cliff Secord as it does his stunt double, although that was par for the course back in the day. The uniform is where this sculpt really shines. Simple details such as the buttons on the flap of the flight suit, the flair of his tucked in trousers, and the straps on his boots and sleeves give just enough detail to convey the character without feeling anachronistic in terms of being over-designed. There is a harness sculpted on Cliff's back that holds his jet pack, which I'll cover in just a minute. 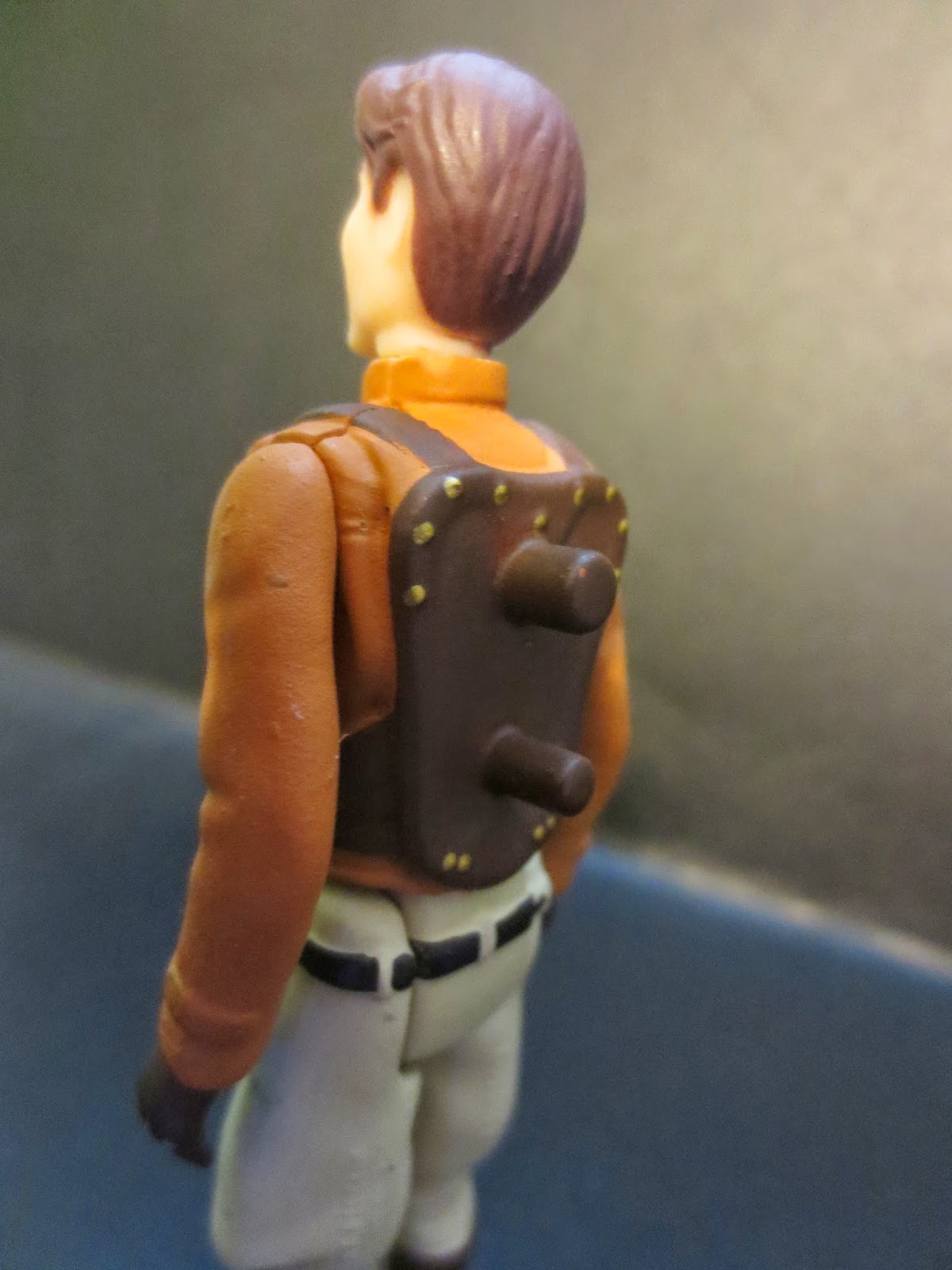 I like the paintwork on this guy although it does seem a bit thicker than the work on most vintage figures. Still, the colors are correct at a glance and little details like the golden buttons, the leather jet pack harness, and the silver knuckles on Cliff's gloves would have made this figure feel pretty special back in the day. There is a fine balance between capturing the past and being slavish to it, and I think ReAction seems to be doing a good job of keeping their footing so far. There is a little slop here and there, though, and some scuff marks, but nothing that kills the figure for me. 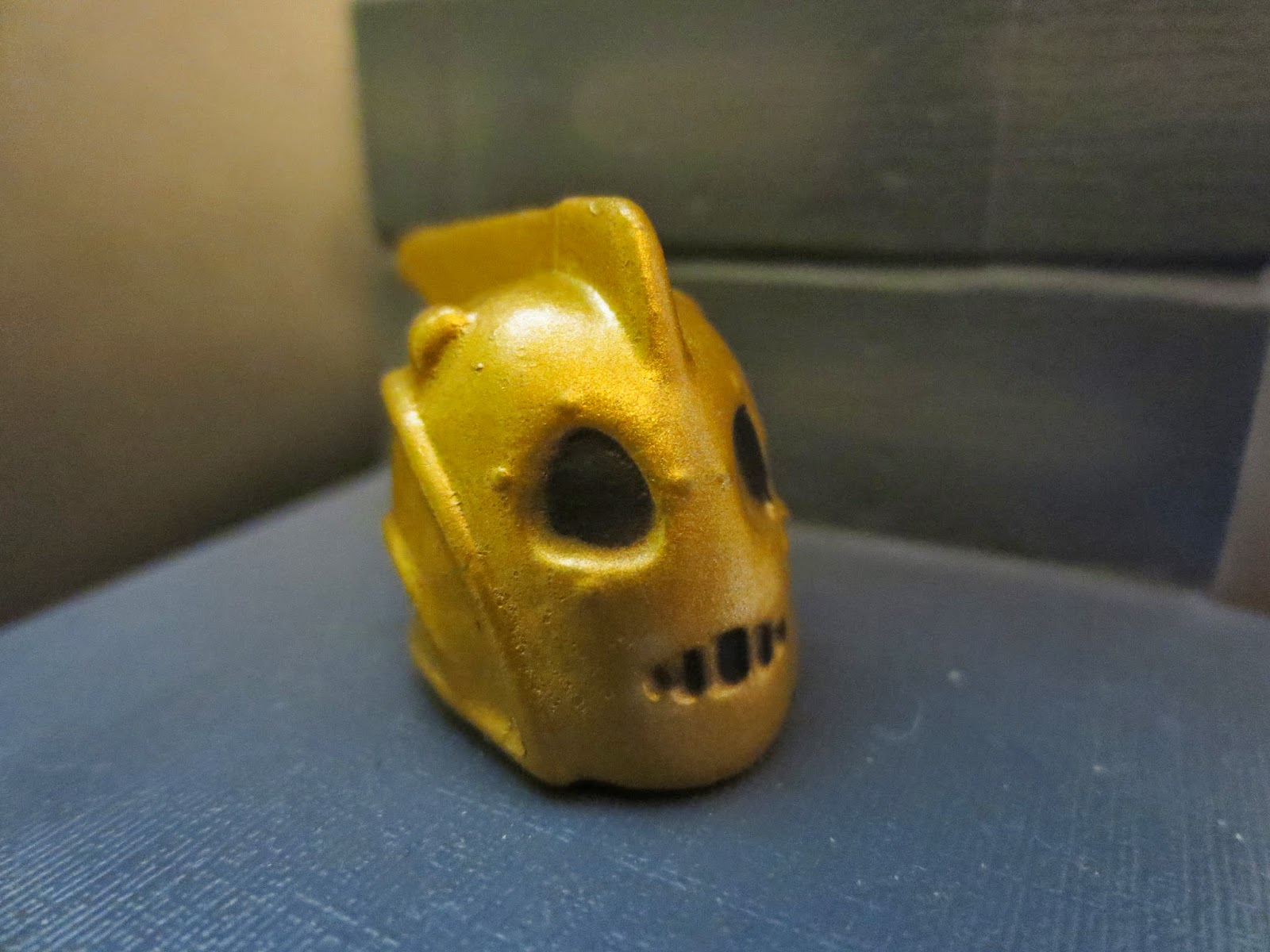 Cliff comes with both of the accessories he really needs to turn him into the Rocketeer: His helmet and his jetpack. The helmet is a little bit oversized, but that seems true to the era of toy making being emulated. The helmet fits nicely on Cliff's head and is molded in a great brass colored plastic with some nice black details for the eyes and mouth grate. 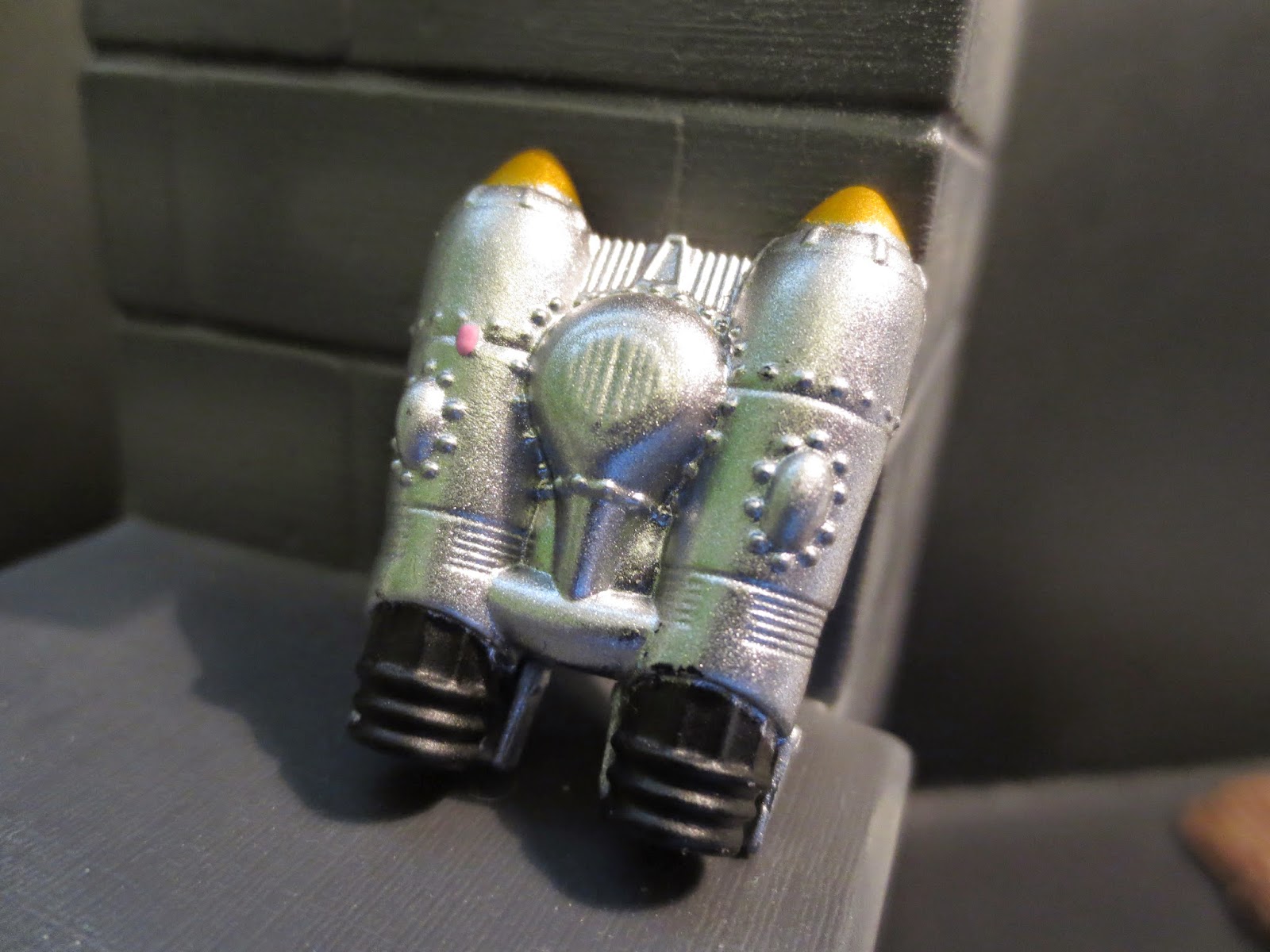 The jet pack is definitely way more detailed than anything from this era, but I still love it! It's covered in detail with gold and black paint apps on the jets and a little dab of pink bubblegum on the left jet as a nod to the on the fly fix from the film. It snaps on Cliff's back and stays on, nice and secure. These two are great, although I do wish he had come with a pistol of some kind as well. 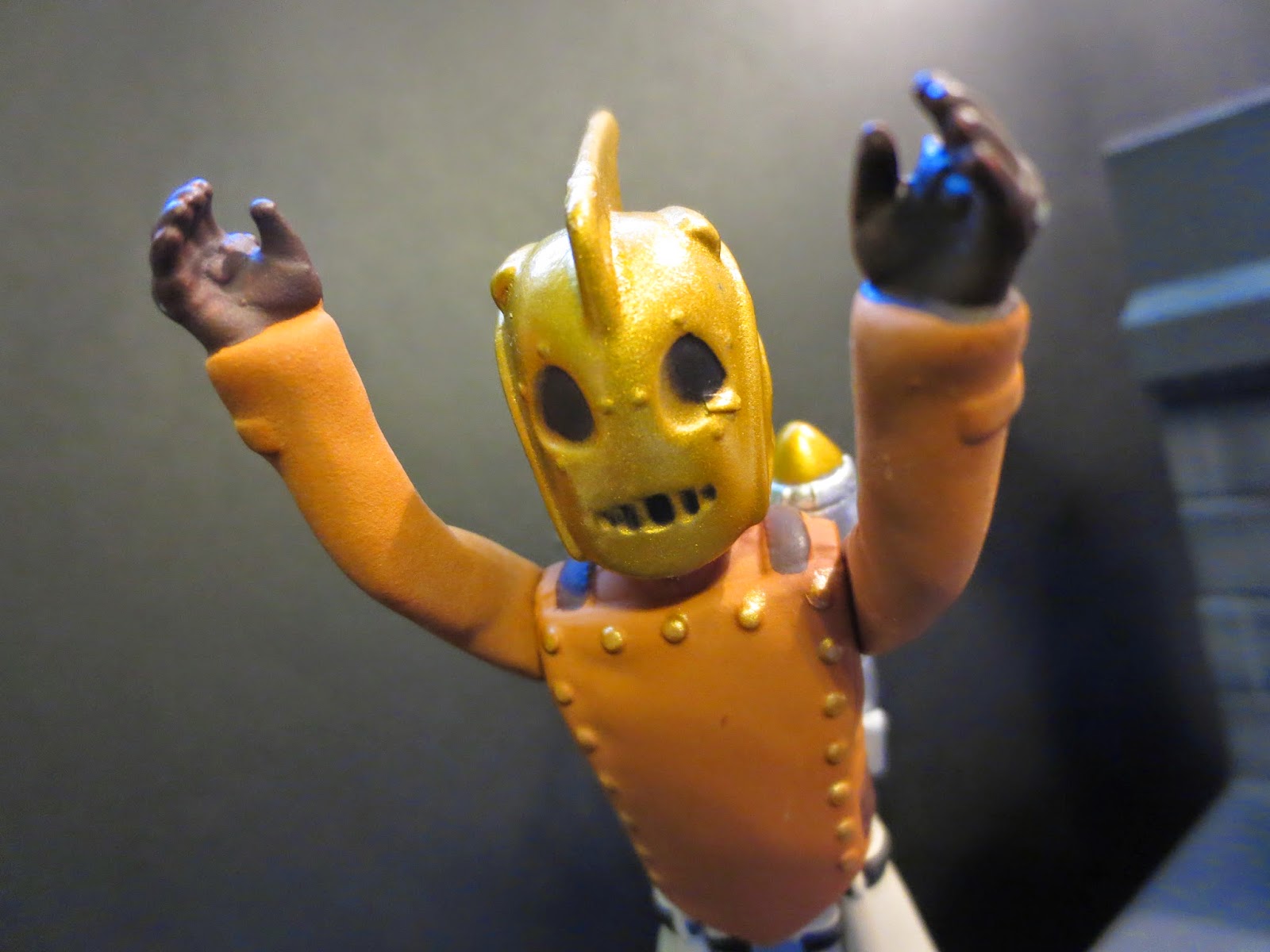 This is a really simple figure, but I love it. For the $10 MSRP FunKo is asking for these, I think you're getting a decent value. The paint has some weak spots, but I think everything else is on target with what FunKo and Super7 are trying to do with this line. While this figure isn't from the time period of these original figures, he is a character I recall fondly from childhood. While I hadn't seen the movie, I did have a bendable Rocketeer toy with a removable jet pack that I recall fondly. 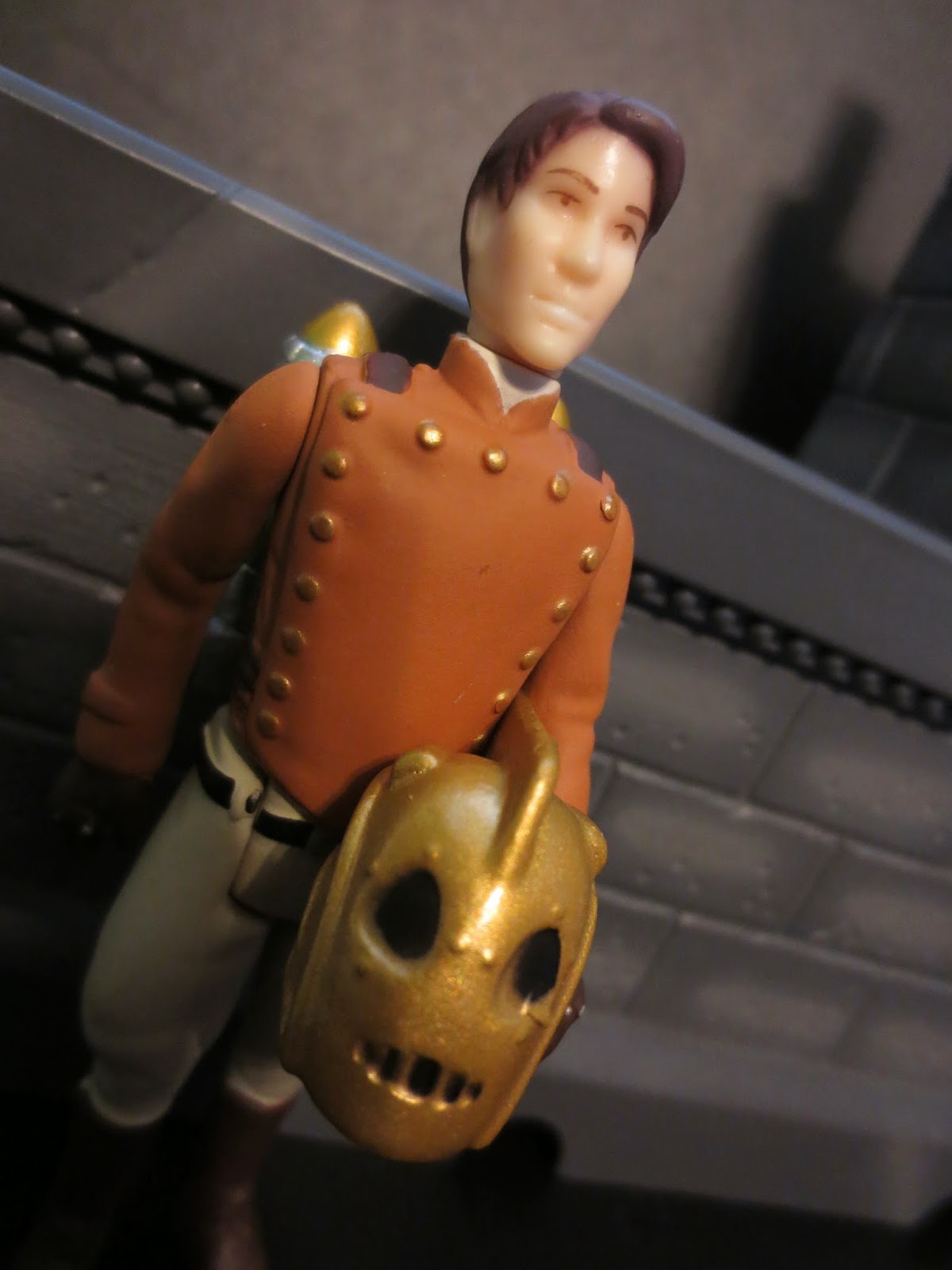 It's kind of cool to have an even more vintage version of a toy that I had as a kid. If you're really into The Rocketeer or simply love vintage styled action figures, you should love this. If you're definitely more concerned with modern aesthetics and articulation, you can probably safely write off what FunKo is doing here. As it is, I strangely find FunKo's focus on creating nostalgia themed toys refreshing and will gladly give the Rocketeer a Great rating. I can't wait to see more of these, particularly the upcoming Universal Monsters, Escape from New York, and horror icons such as Michael Myers and Sam from Trick 'r Treat! 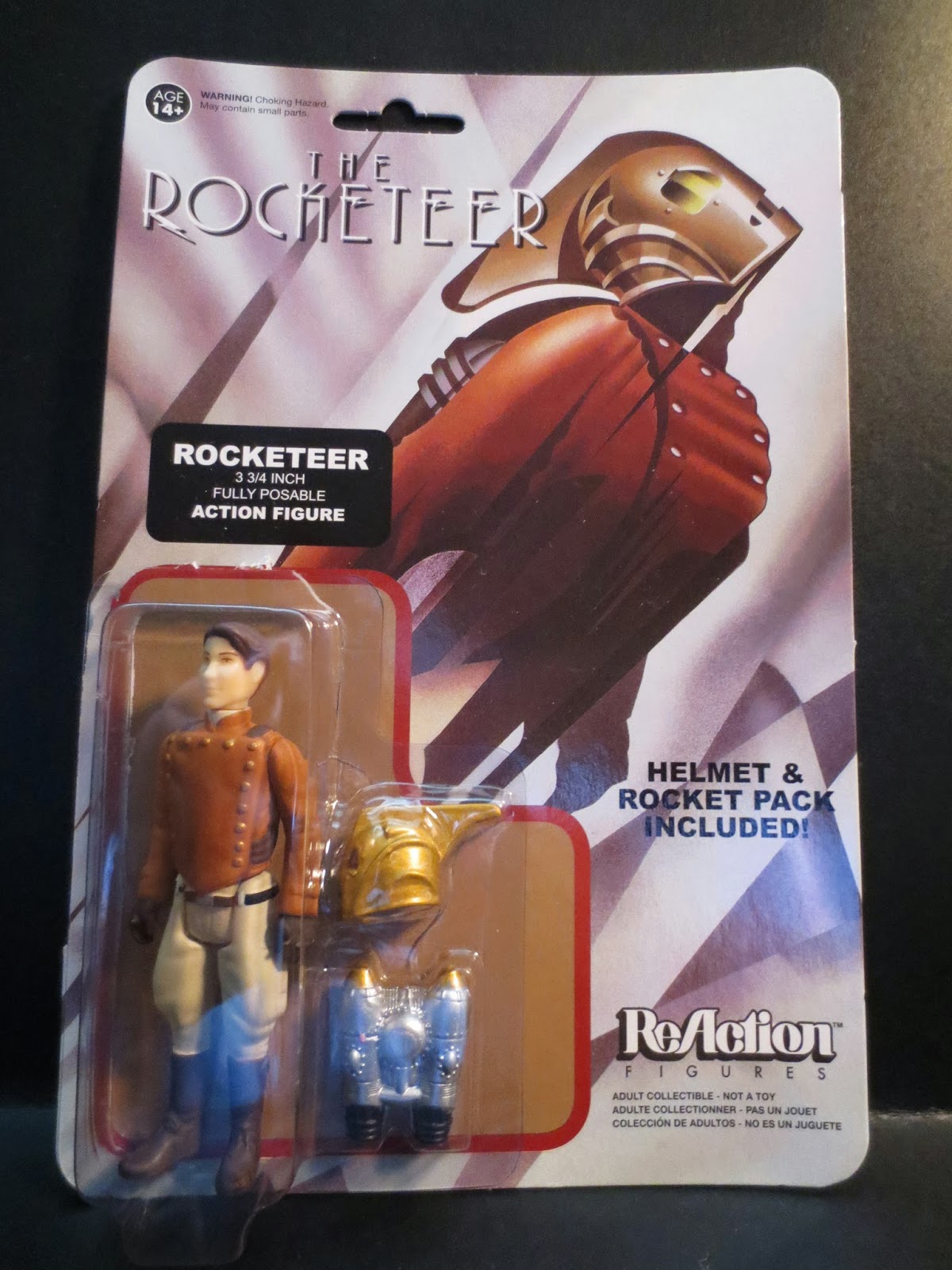 Interested in a Rocketeer of your own? Head on over to Big Bad Toy Store or Entertainment Earth and pick one up today!