Haunt the Halls: "Hey There!" Fall Sign from Hobby Lobby 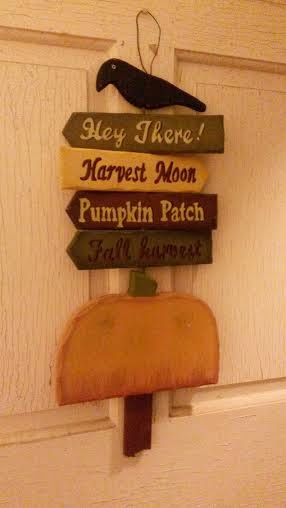 This year I'm going to put up one Halloween/ Fall themed decoration a day. I'm not allowed to put stuff out in the yard yet, so I'm having to put things up in the house. At this point, everything I'm putting up is kind of tasteful so far as Halloween decorations go. This is my favorite time of the year and I want to make the most of it. On September 1st I put up a glittery green owl on my daughter's bedroom door. I bought it for her last year two weeks after she was born and this year she is extremely impressed by it. Since she's really getting into the whole "pointing at cool stuff" phase, a glittery green owl definitely receives a fair share of pointing. Yesterday's decoration, however, is a bit more subdued. In fact, it is actually on front door of our house. Read more about this after the break....

I love this thing. I bought it at Hobby Lobby in 2011, proceeded to stick it into the ground, broke the stake, and decided to hang it on the door. It's like an old sign and the different directional signs actually spin. If I had a pumpkin patch, a fall harvest festival, and a harvest moon in my yard, you can surely bet I'd use this to direct folks towards them. I love this sign so much because it reminds me of the world I want to live in. I want to live in a world that is perpetually fall with harvest festivals every day, full moons every night, and all my time can be spent hanging around in cool places like pumpkin patches, graveyards, and bizarre, eccentric towns with lovable but odd residents. My ideal world is a cross between a pumpkin farm, the  video game Harvest Moon, Hyrule, and a Henry Selick film.

I like the crow on top and the big metal loop that lets me hang this from my door. I do, however, wish that the top sign said "Hay There!" rather than "Hey There!"