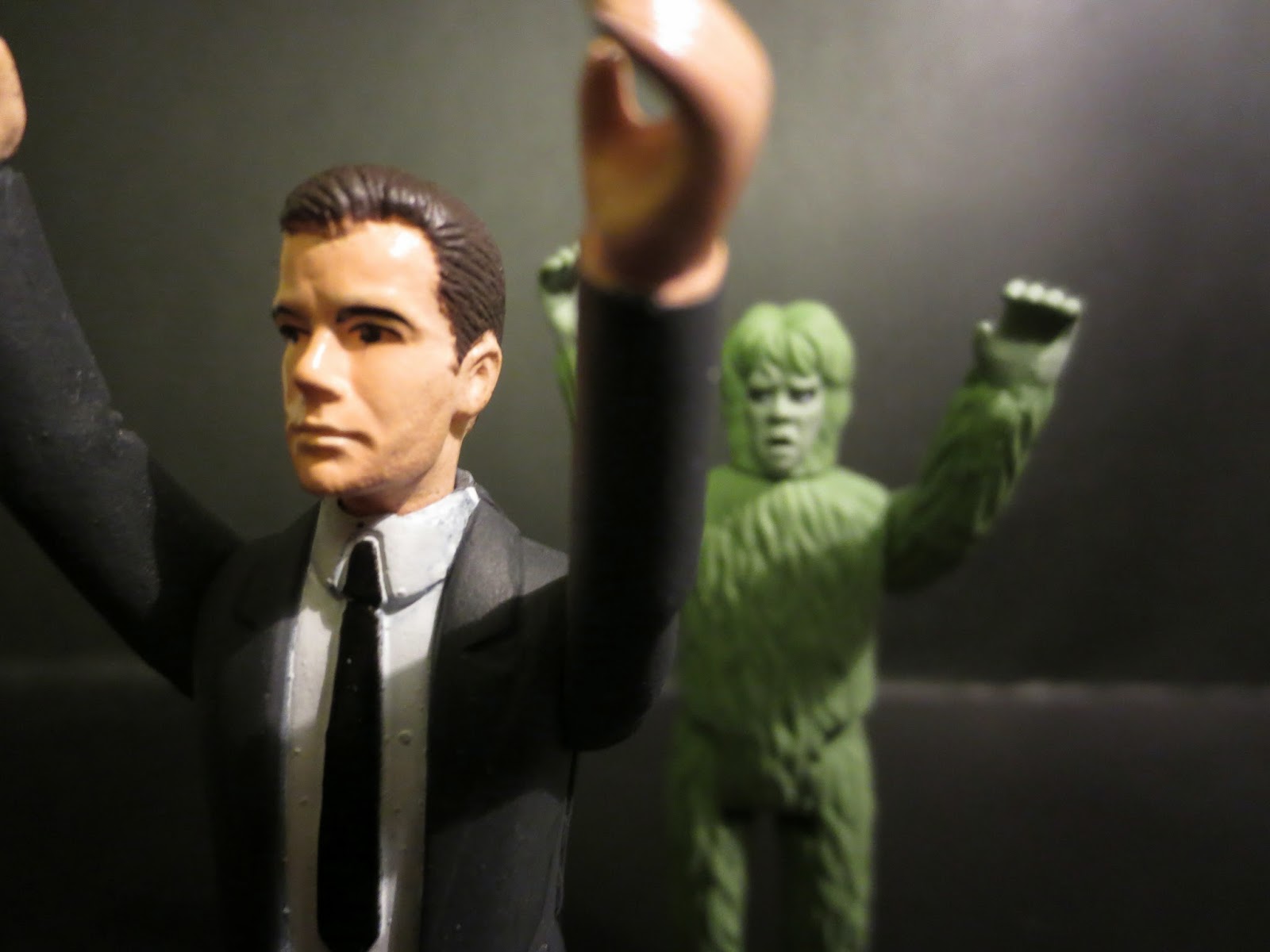 "Portrait of a frightened man: Mr. Robert Wilson, thirty-seven, husband, father, and salesman on sick leave. Mr. Wilson has just been discharged from a sanitarium where he spent the last six months recovering from a nervous breakdown, the onset of which took place on an evening not dissimilar to this one, on an airliner very much like the one in which Mr. Wilson is about to be flown home - the difference being that, on that evening half a year ago, Mr. Wilson's flight was terminated by the onslaught of his mental breakdown. Tonight, he's traveling all the way to his appointed destination, which, contrary to Mr. Wilson's plan, happens to be in the darkest corner of the Twilight Zone."

"Nightmare at 20,000 Feet" is without a doubt one of the most memorable episodes of The Twilight Zone. This fifth season episode (#123) has a lot going for it to make it stand out in the minds of fans: It's based on a short story by horror and sci-fi legend Richard Matheson, it was directed by Richard Donner, it starred a pre-Kirk William Shatner, and it was remade with John Lithgow in the starring role for a segment of 1983's Twilight Zone: The Movie. It also is a darn fine episode of the show. In their new Twilight Zone action figure line, Bif Bang Pow! has released two characters from this episode: The monstrous Gremlin and, the subject of today's review, Bob Wilson. While the standard figures in this line are done in a black and white paint scheme, Bif Bang Pow! released a limited run of 456 figures as SDCC as a "Now in Color" exclusive. Since I'm planning on displaying these along with other retro-inspired lines, I opted for the color variants. Ready for a look at poor Bob Wilson? Then join me after the break... 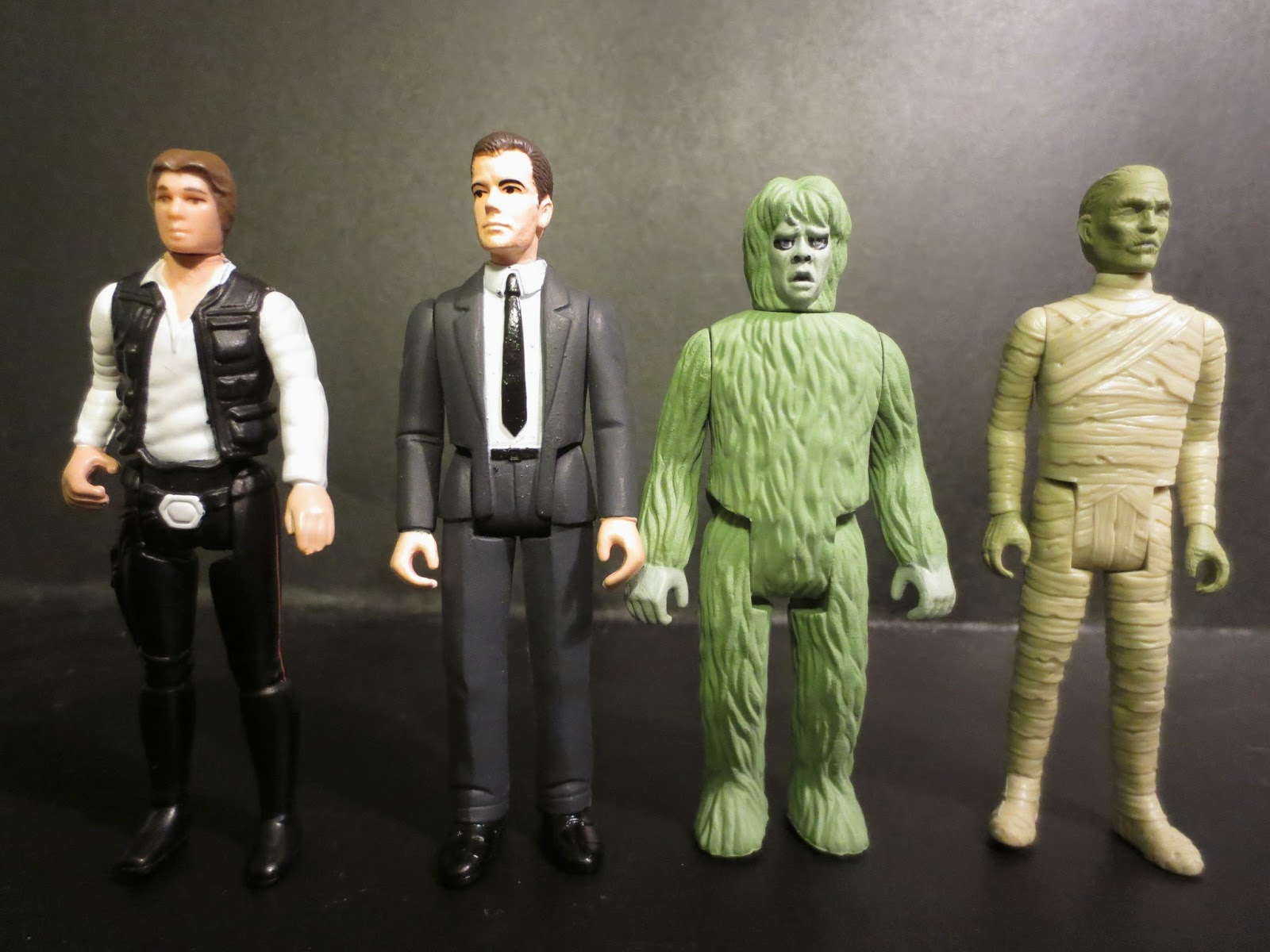 Similar to Funko's Re-Action line, Big Bang Pow! has attempted to create these figures in a style that pays homage to the 3 3/4 toylines of the late 1970's and early 1980's. The excellent black and white packaging and the figures themselves look great although I think they are just a bit more detailed than the figures they aim to represent. The packaging is awesome, though, and Bif Bang Pow! picked a great iconic picture of Shatner from the episode. Bob Wilson here looks plenty vintage, however, and will fit in perfectly with other figures of the era or style, even if he is a bit more detailed and a bit taller. He stands around 3 7/8 inches tall rather than the standard 3 3/4. 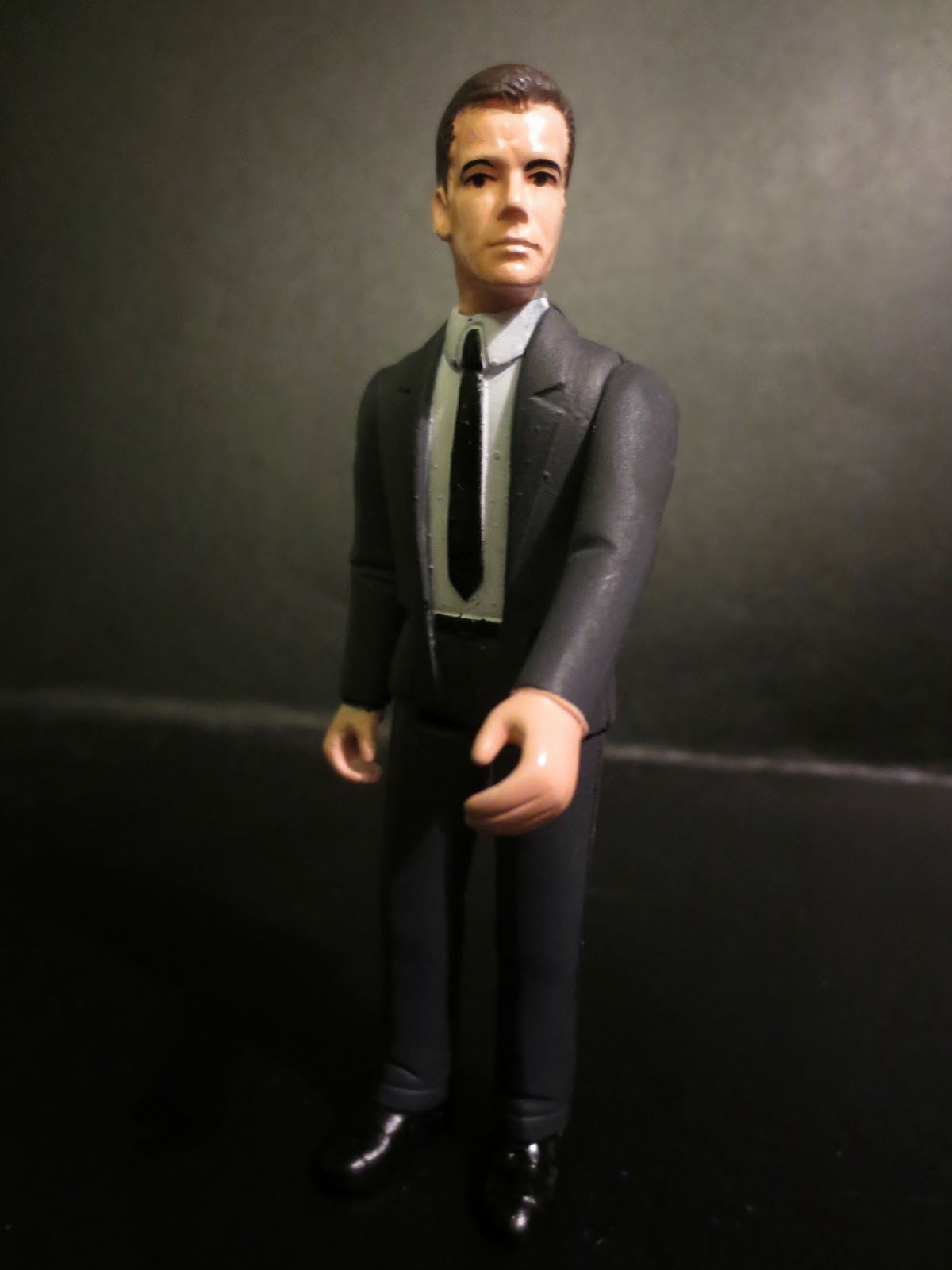 The easiest part of writing these retro-inspired toy reviews is covering the articulation, as it is almost always the same: Swivel hips, swivel shoulders, and a swivel neck. Bob can sit in his seat, stand up in the aisle, turn his neck to look out the window at the wing of the plane, and raise his arm to aim his included pistol accessory. He feels really sturdy and solid. 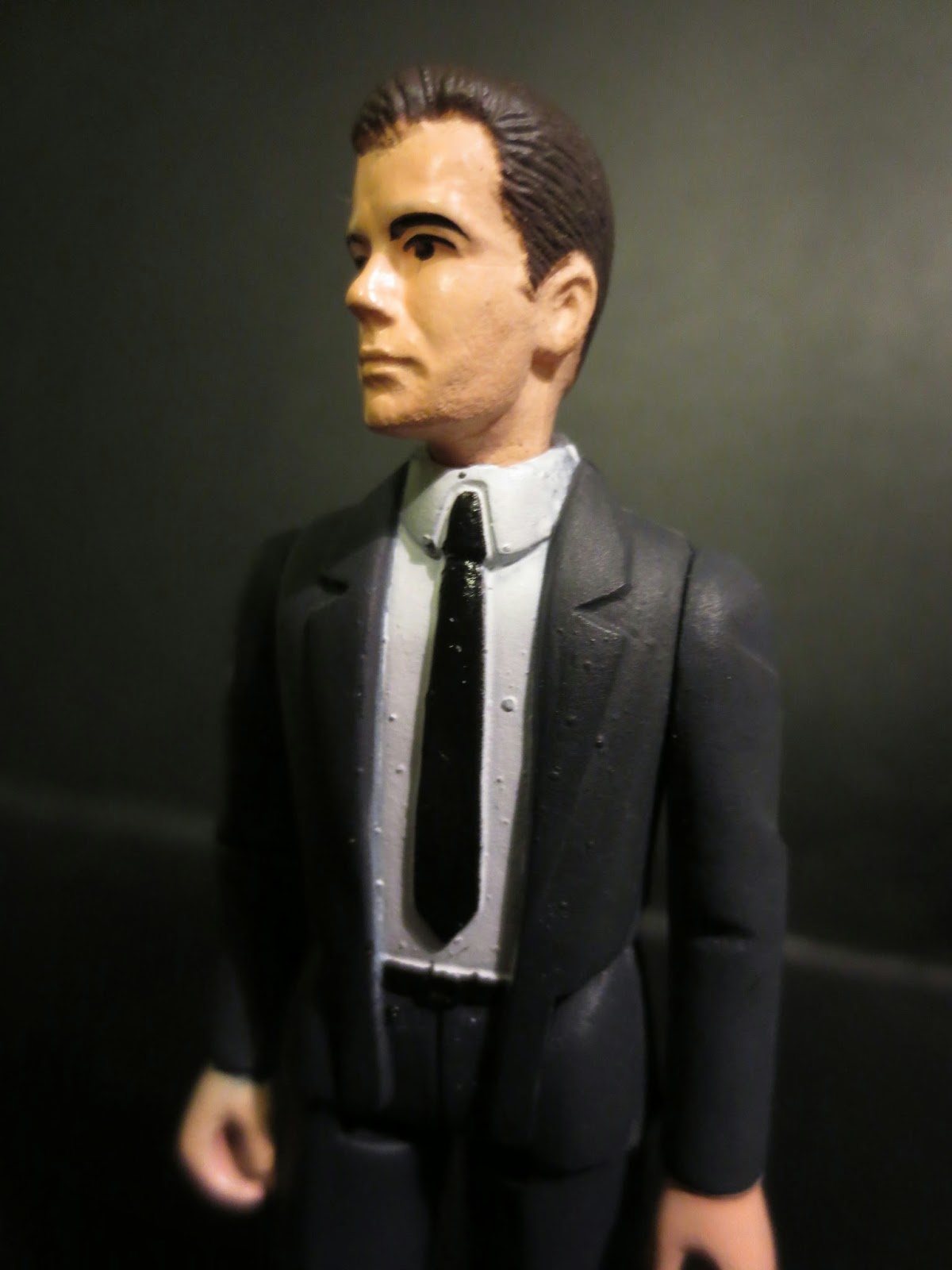 As I mentioned earlier, I think Bif Bang Pow! nicely captured the vintage charm of the old Kenner/ Star Wars era figures while offering a bit more detailed sculpting and paintwork. This is probably more obvious on the other figures, however, as Bob Wilson is pretty much just a guy in a suit. There's nothing wrong with that as it is representative of the source material, but look at this guy without the context of the packaging and you'd have no clue this was intended to be Shatner or a character from The Twilight Zone. The suit details are great as little elements like the folds around the hems of his trousers and the split seam on the back of the jacket add a nice level of detail, although these most certainly would not have been present on a vintage figure. The face is a nice sculpt, but there's nothing particular Shatneresque about it (granted that is part of the style, as most vintage figures of this kind looked nothing like the actors they depicted). Honestly, if I just saw this figure and was told it was a Twilight Zone toy, I might believe it was meant to be Rod Serling. It looks as much like him as it does Shatner (although I do hope a Rod Serling figure gets put into this line at some point). 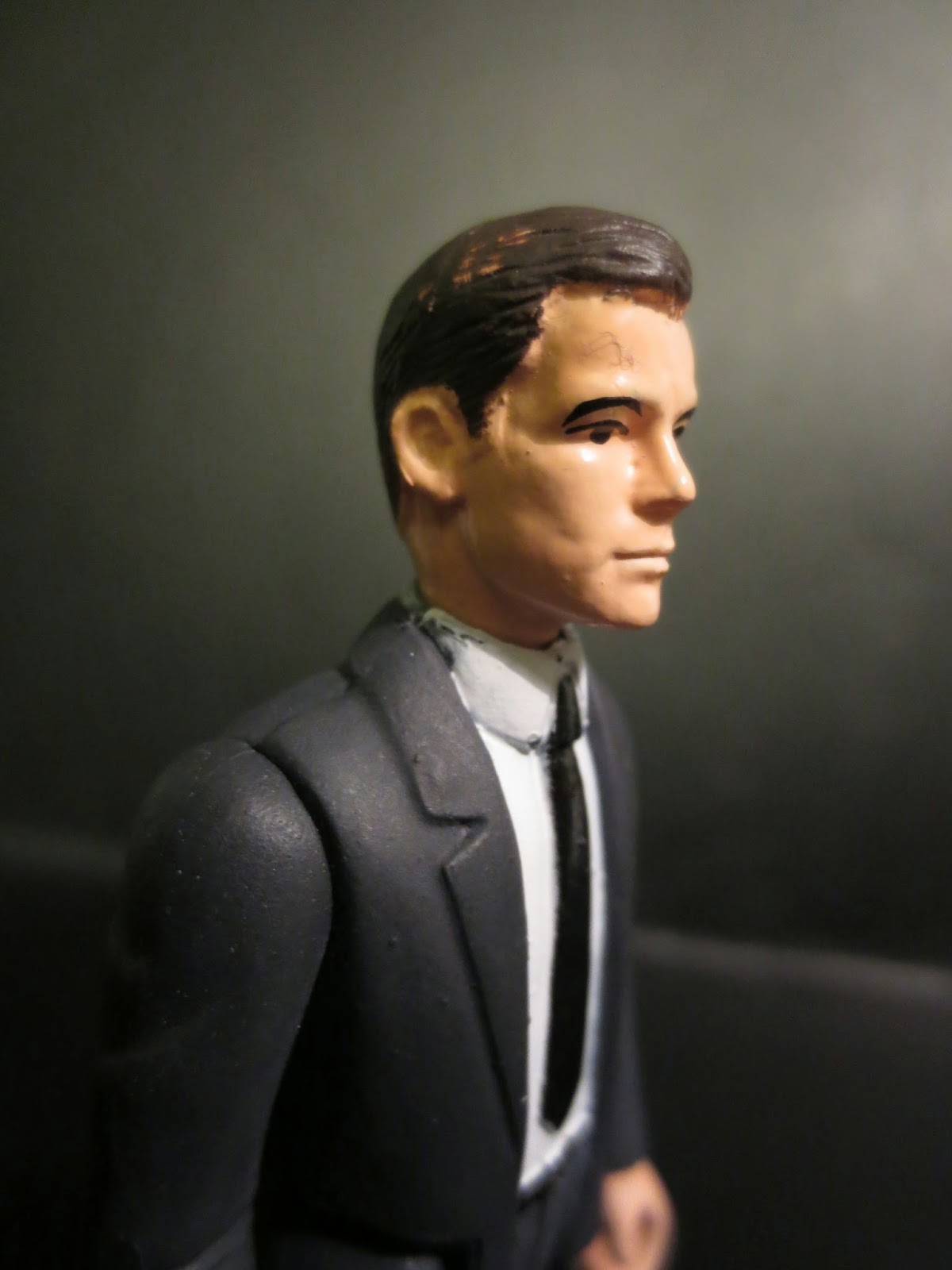 There's one thing about this figure I really don't like however, and that's the paintwork. It is very messy with lots of slop and paint bleed. On the surface I like how Bif Bang Pow! handled the color variants, as they look much like I imagine these characters would look in color. Bob Wilson's black tie, belt, and shoes are nice and shiny while his suit is a tasteful charcoal gray. Unfortunately, the borders between differing paint applications are a mess. It isn't as bad as the Sheldon Cooper SDCC exclusive figure they released (Michael Crawford reviewed it here) but it still is bad. His collar has weird bleeding, his hair is missing in places, and his white dress shirt has an odd, bubbly texture to it. I'd be happier with simpler paintwork on these figures if it meant less problems. 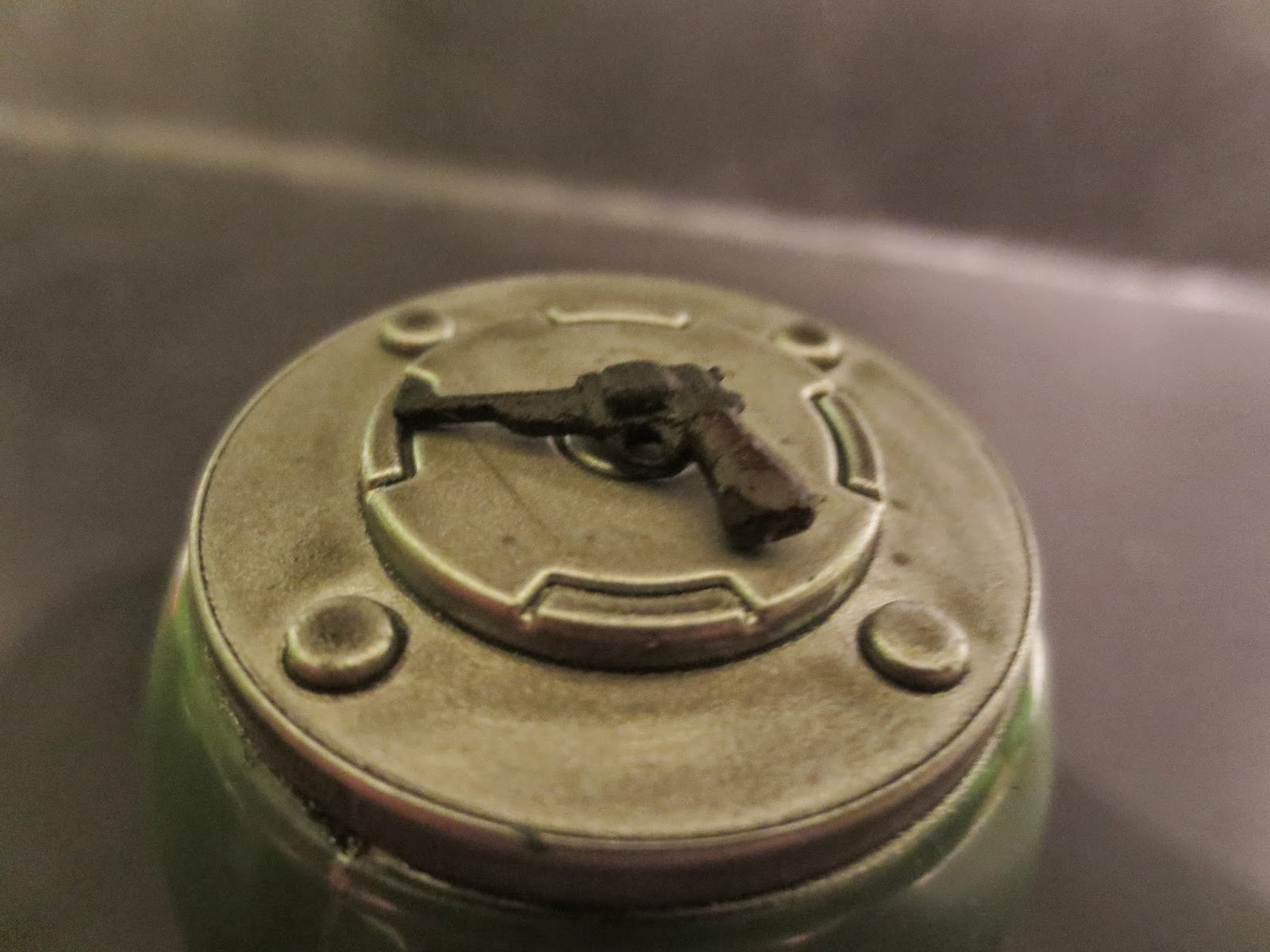 I'm pretty satisfied that Bif Bang Pow! has given 2/3 of the figures in this line accessories of some kind. We're not always guaranteed to get something with figures like this, so anything helps. Bob Wilson includes the revolver that he took from a police officer on board the airplane which he tried to use against the gremlin. It's a decent accessory and even features a brown paint application on the handle. Definitely not something we'd see on a true vintage figure, but a cool detail. He can easily hold it in either hand. 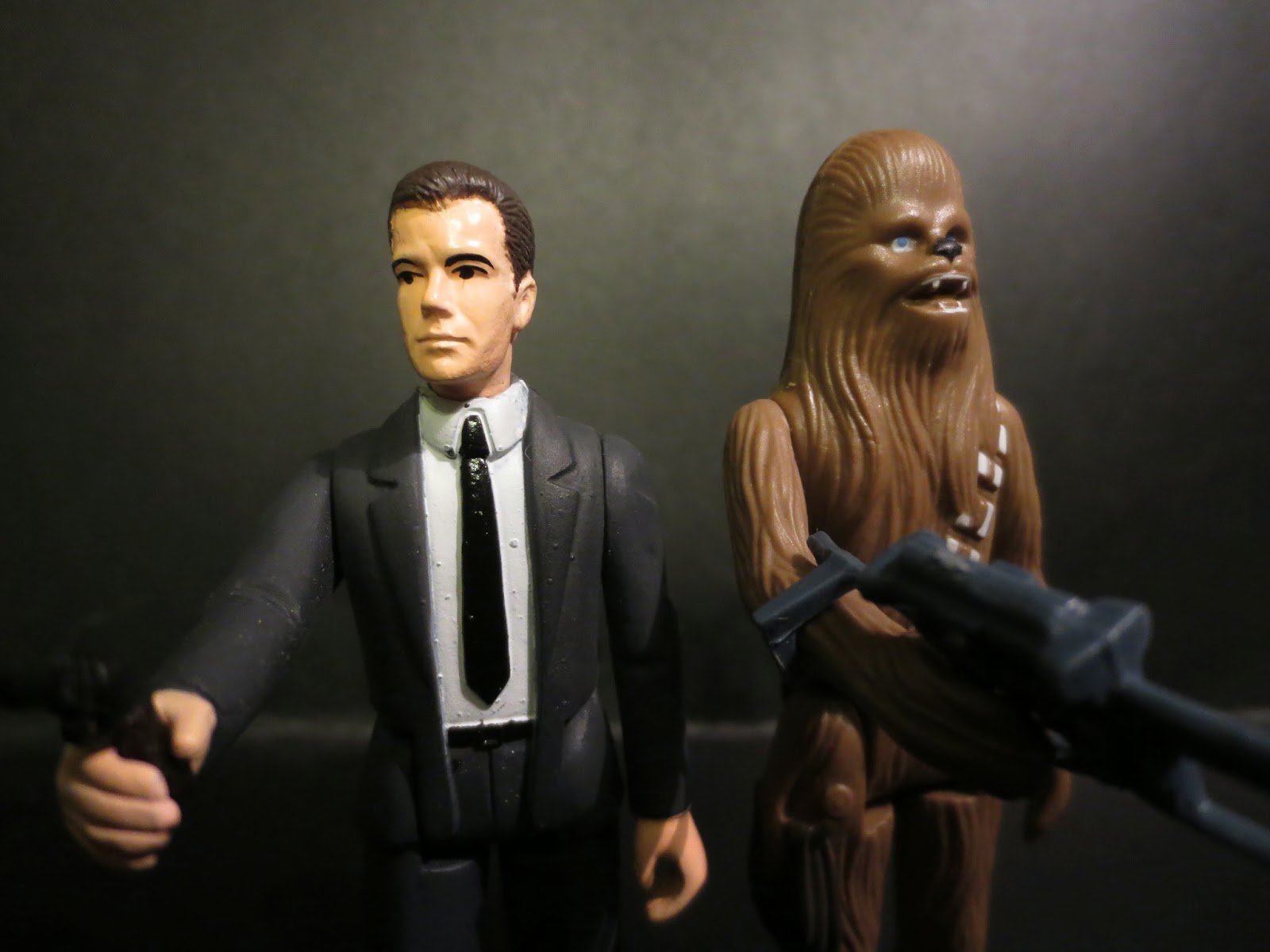 I'm really hoping that The Twilight Zone toyline has some long legs, as there are plenty of characters I'd love to see. It's a great concept for a collectible toyline because even though there isn't much of a play pattern here, building a roster of iconic characters and creatures should make for a nice display. If it weren't for the sloppy paintwork, I'd have few complaints with this figure, but as it is I'm not completely sold on him. This really seems to be a problem with recent Big Bang Pow! products and hopefully it is one they can soon rectify. As it stands, I'm giving Bob Wilson a Good. There are better retro based figures out there and better figures in this line. Despite being based on William Shatner, the greatest living thespian and musical genius, this figure loses some of its luster when removed from its blister card. Display him alongside the Gremlin, however, and you'll have a pretty cool, memorable little scene going on. 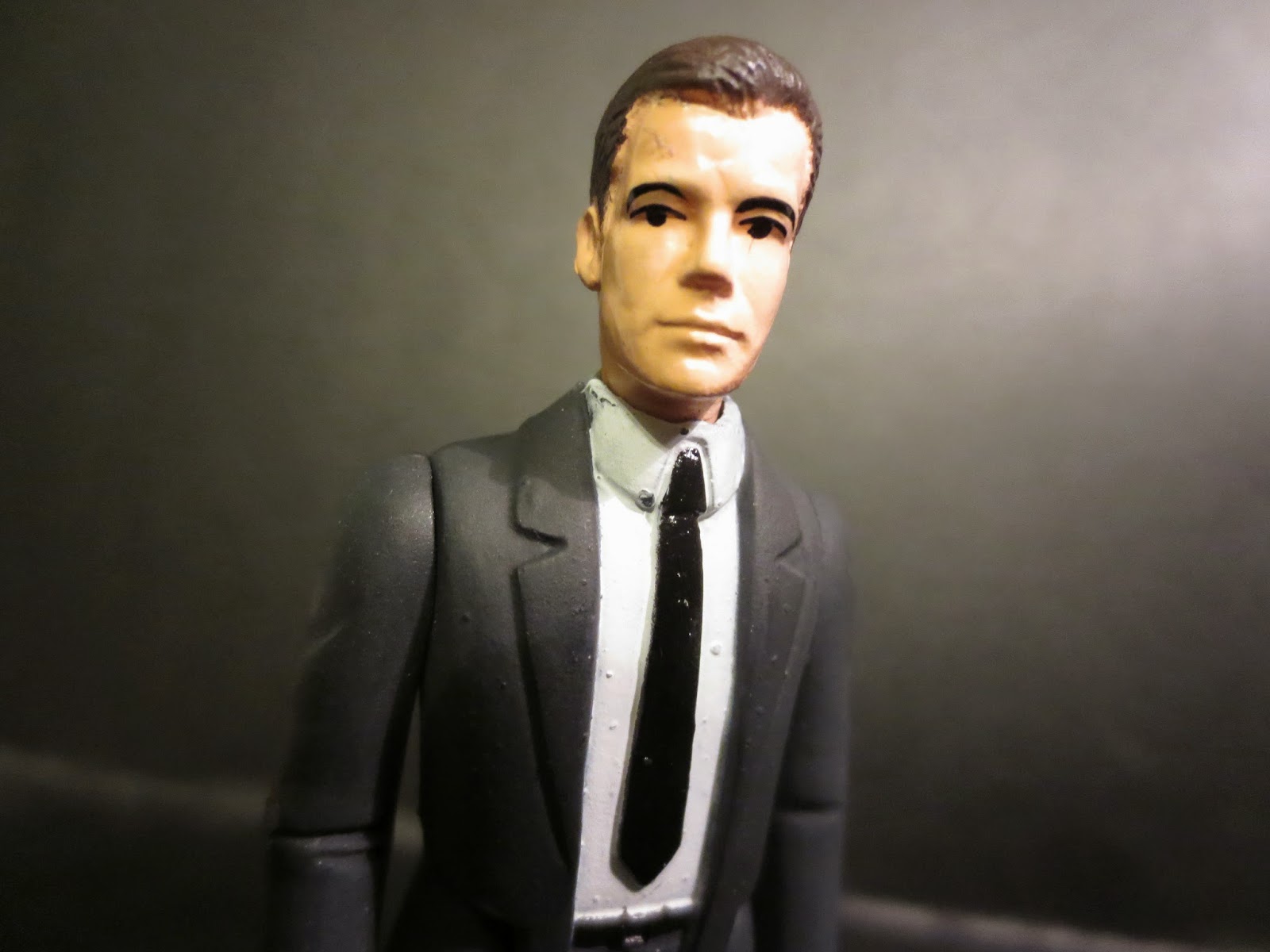 The flight of Mr. Robert Wilson has ended now, a flight not only from point A to point B, but also from the fear of recurring mental breakdown. Mr. Wilson has that fear no longer... though, for the moment, he is, as he has said, alone in this assurance. Happily, his conviction will not remain isolated too much longer, for happily, tangible manifestation is very often left as evidence of trespass, even from so intangible a quarter as the Twilight Zone.