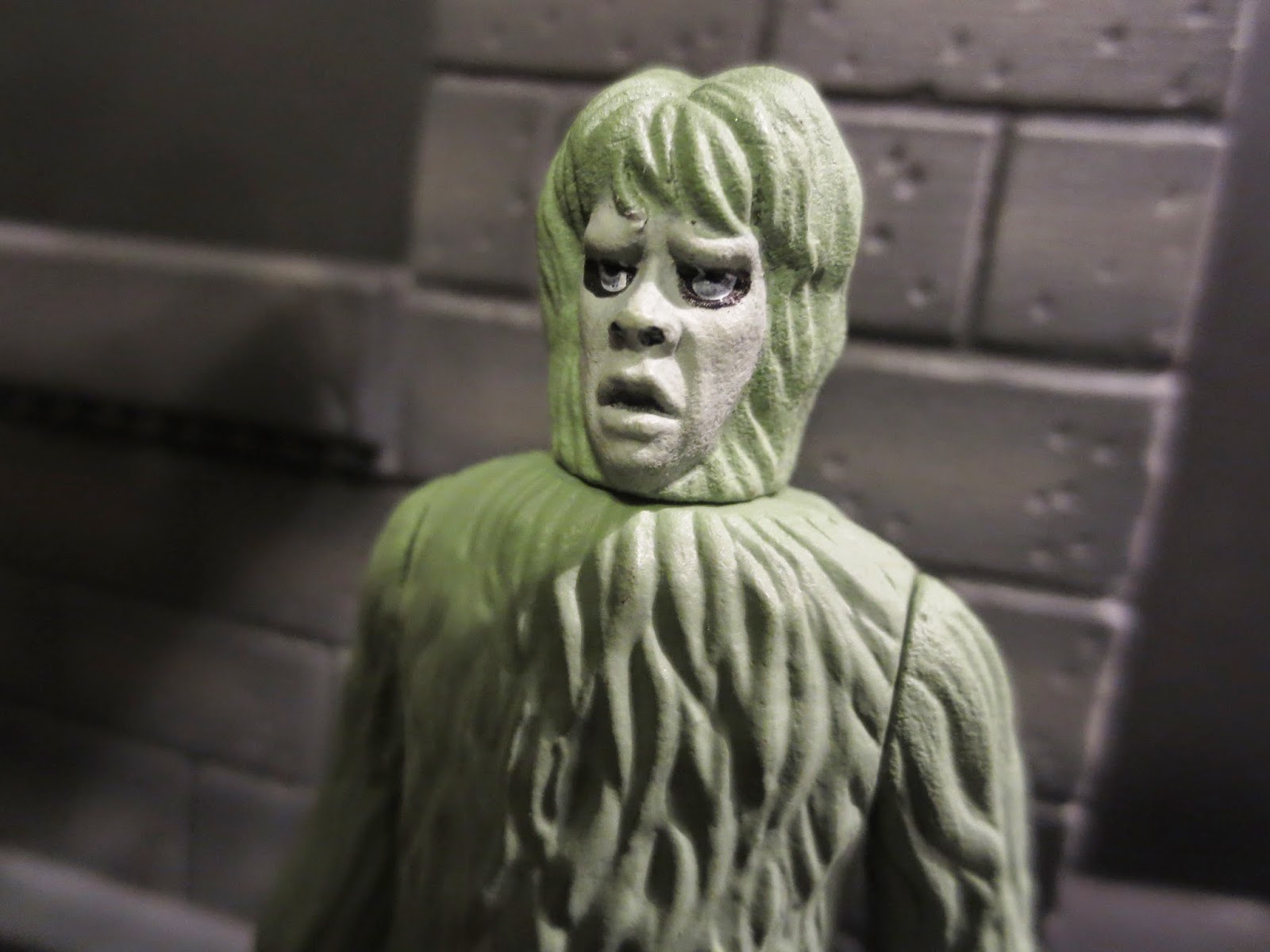 It has been almost a month since I reviewed Bob Wilson, the protagonist of The Twilight Zone episode "Nightmare at 20,000 Feet," but I'm finally getting around to that episode's antagonist, the Gremlin! Part of the first series of 3 3/4 inch The Twilight Zone "retro" styled action figures from Bif Bang Pow!, the Gremlin can be found in two variants: The standard black and white or the "Now in Color" SDCC 2014 variant that gives the character a green paint job. Only 456 of the SDCC 2014 variant version were released and it is that limited version that I'm reviewing today.  I've talked a few times about how excited I finally am to be getting toys and action figures based on the works of Stephen King, well now I've also got some great action figures based off of the works of one of my favorite authors, the late Richard Matheson. "Nightmare at 20,000 Feet" is without a doubt one of the most memorable episodes of The Twilight Zone, and it has a lot going for it to make it stand out in the minds of fans: It's based on a short story by Matheson, it was directed by Richard Donner, it starred a pre-Kirk William Shatner, and it was remade with John Lithgow in the starring role for a segment of 1983's Twilight Zone: The Movie. It also is a darn fine episode of the show and one I'm really excited to be able to reenact whenever I desire. Ready for a look at this extremely cool Gremlin? Then join me after the break... 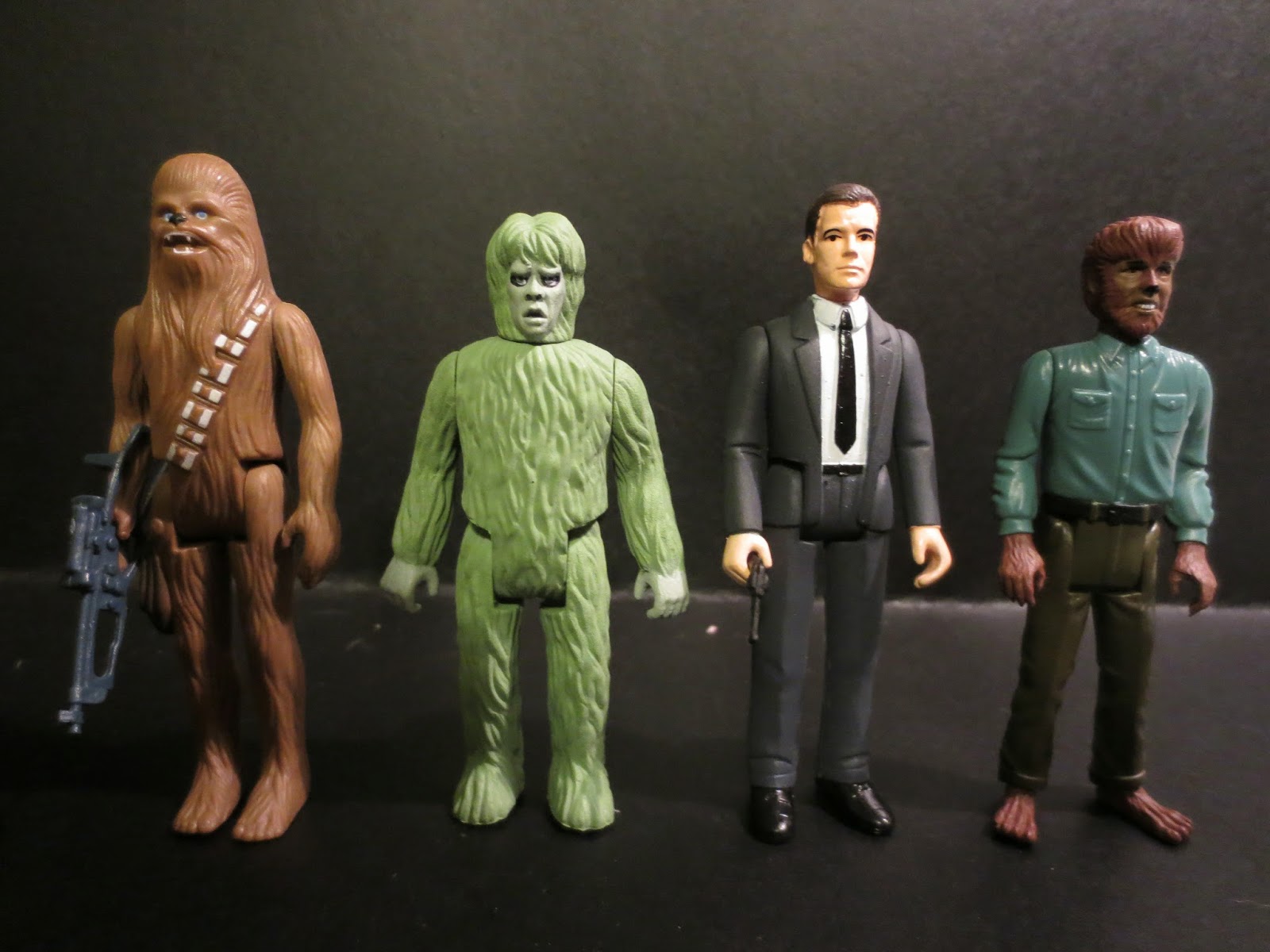 While some of the Bif Bang Pow! figures just don't give me the retro vibe, the Gremlin very much does. Had this guy been made in the late 1970s or early 1980s, he easily would have in with any Star Wars collection as a background alien in the Mos Eisley Cantina. Interestingly, the Gremlin is exactly 3 3/4 inches tall which makes him just a but shorter than Bob Wilson. This probably makes sense, though, as Gremlins are typically portrayed as smaller creatures. Plus, we never get a clear shot of this guy's exact scale in the episode; we only see that he's not much bigger than Wilson. 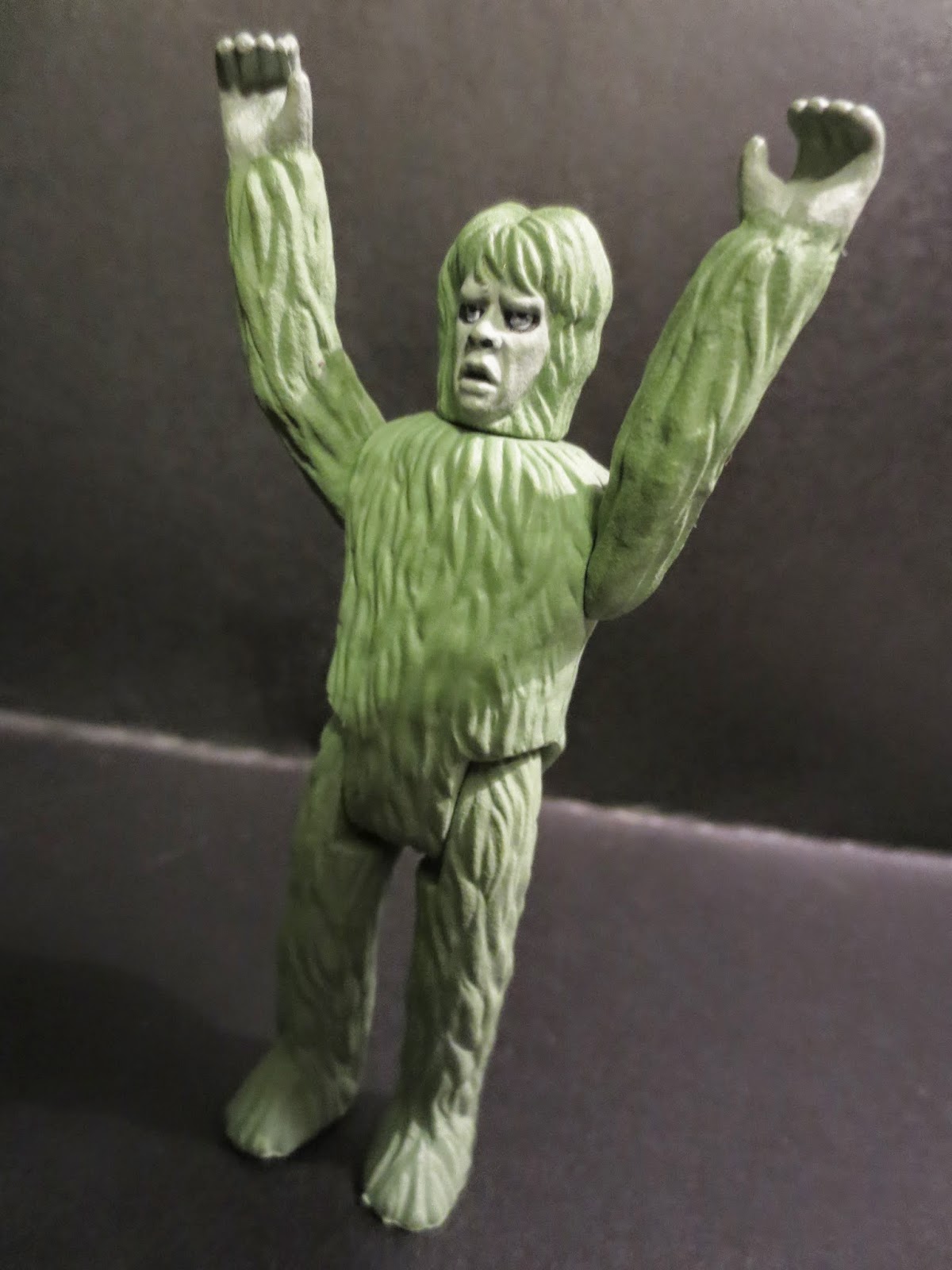 Like most retro based releases, the Gremlin features five points of articulation: Swivel hips, swivel shoulders, and a swivel neck. The figure feels solid, the articulation works well, and he can easily stand on his own. There isn't much more that I can expect from a figure like this, so consider me pleased. 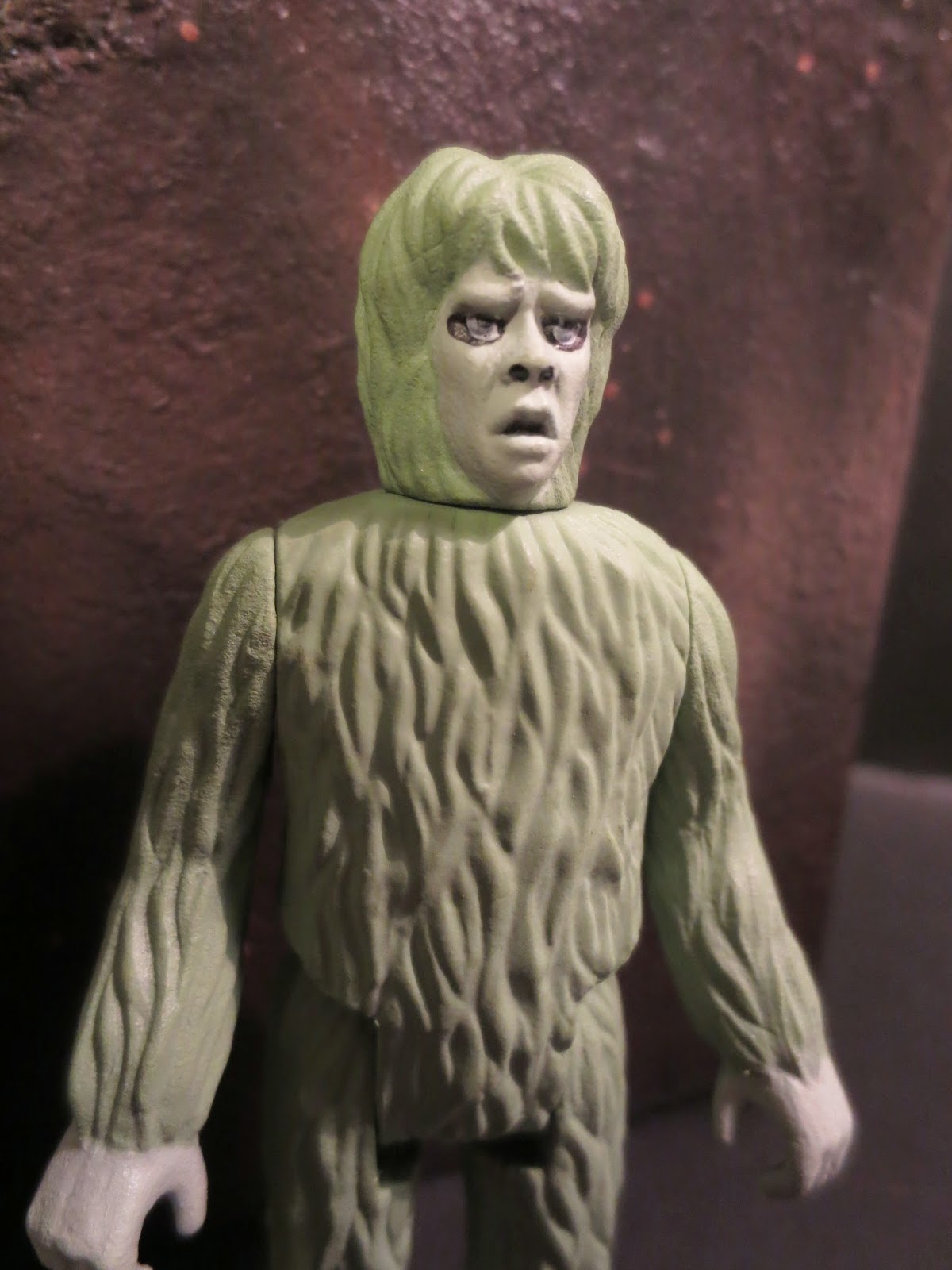 Before we talk about the figure's sculpt, let's talk about the character's original costume. It was....rather odd. Check out this link for some great stills of the character. OK, so I think we can all agree that this is a rather odd looking character. I'm not going to say bad because I think ultimately the design of the costume was rather unnerving. While the episode does seem to imply there really was something on the wing, during the episode we're left to wonder if Shatner is losing it or not, so perhaps we're seeing some sort of hallucination. Still, the Gremlin had a very simple looking costume, and Bif Bang Pow! captures that simplicity well. The fur that covers nearly all of the body (the hands and face are exposed) is plain and simple, kind of like some of the Ewoks from the vintage Return of the Jedi line. The face also has that bizarre, expressionless, pug nosed look to it. I'm rather quite partial to it and feel like the entire figure is a great, retro inspired sculpt. 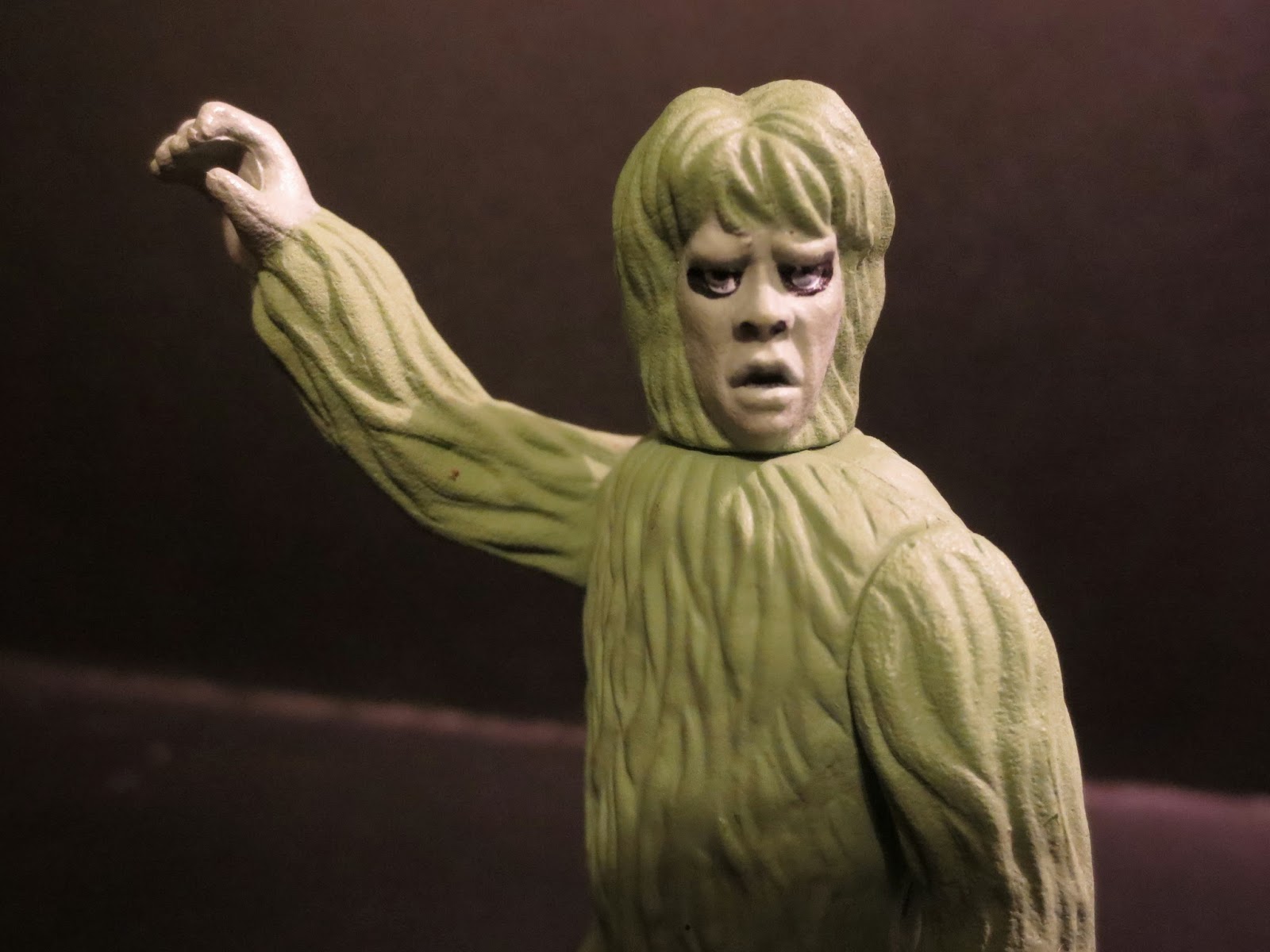 The paint also helps complete the retro feel. Basically his fur is all a solid pale green with even paler skin on his hands and face. There is a little bit of paint on his eyes, nostrils, and mouth, all of which is very clean and neat. The only complaint I have is that rather than sculpting the trademark info onto the figure's feet or something, the info is a black text stamp right on the Gremlin's backside. It's probably the least intrusive place that this info could be put, but it really seems oddly placed. 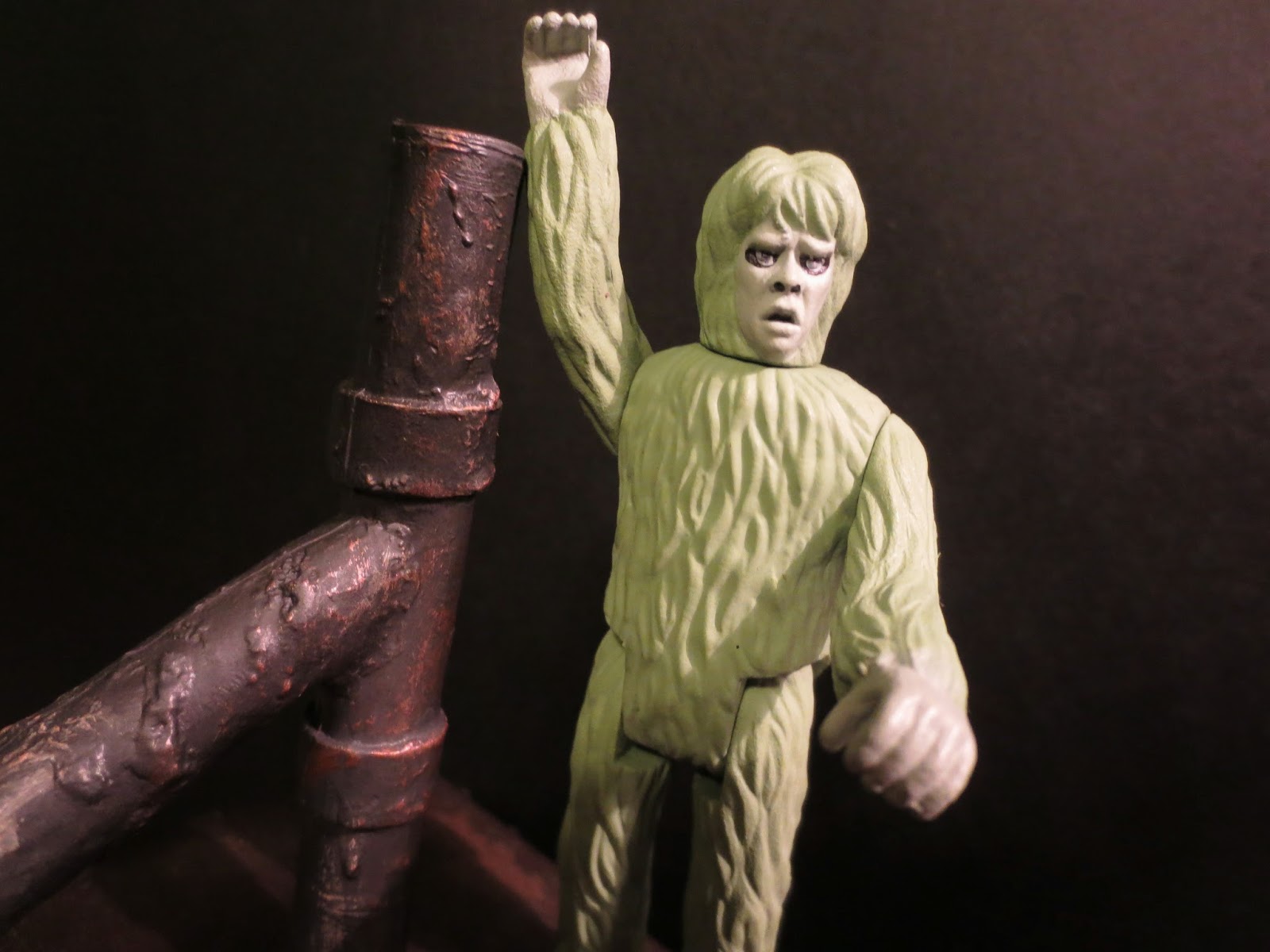 Only two of The Twilight Zone figures come with no accessories: The Gremlin and Talky Tina. I'm not sure what the Gremlin could have come with (maybe a broken piece of wing or a ripped cable?) but I'm sure something could have been worked out. Still, he isn't a figure that an accessory feels necessary, but I always like to get a little something extra. 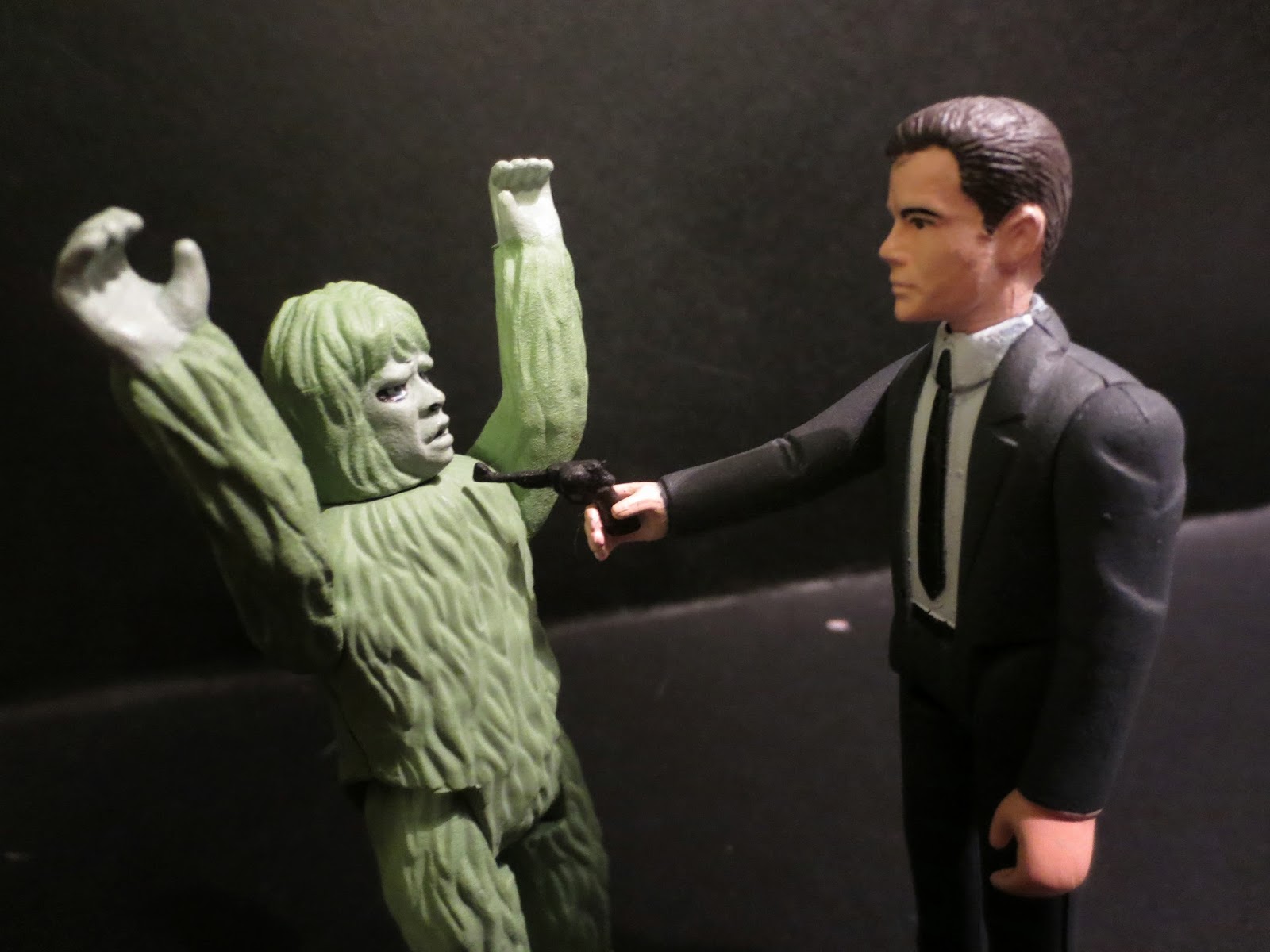 As anyone keeping up with the site lately can tell, I'm really into the whole retro figure thing. I think the Gremlin is one of my favorite figures released so far in this fairly new sub-genre of toy collecting. It manages to resemble the character well while still having that simple retro charm. The paint work and sculpt is simple, but isn't that kind of the point here? I do have one complaint about The Twilight Zone line, but it is kind of a lame one: While the Funko ReAction figures come loose in a plastic bubble, The Twilight Zone figures have a second plastic tray. Maybe it helps keep the figures more secure, but it feels less authentic. Overall, I'm giving the Gremlin a Great and a 1/2. He's weird, creepy, and lots of fun. If you need a figure to torment your William Shatner action figures and you already own a Khan, this is the one to get!