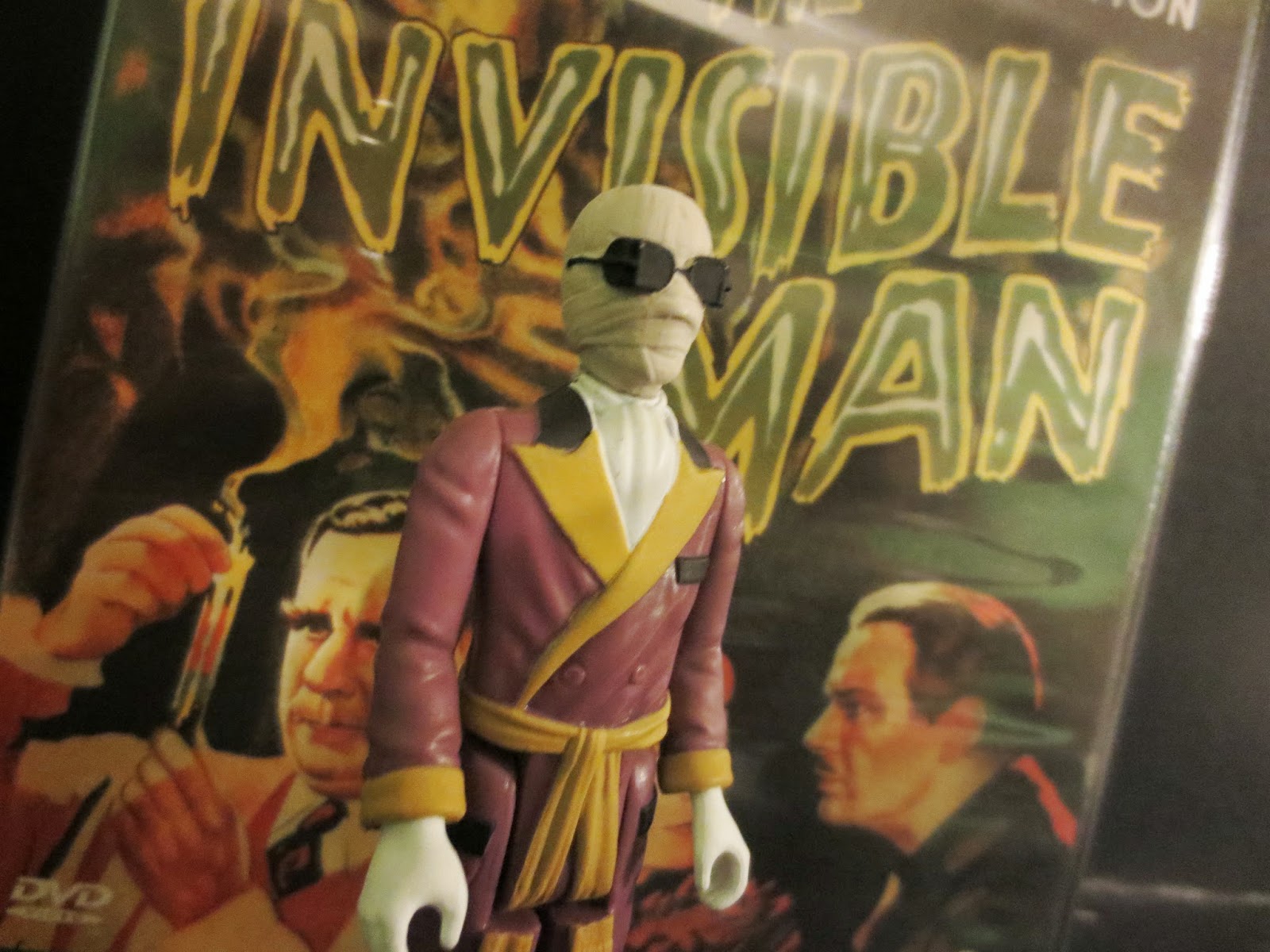 While I reviewed the Mummy when he was released earlier this month, it actually has taken me until just this past week to track down the rest of the Universal Monsters ReAction figures from Funko. Based on James Whales' 1933 film The Invisible Man (which was based on H. G. Wells' 1897 novel), this figure of the Invisible Man, a.k.a. Dr. Jack Griffin, is ready to bring a delightful bit of madness to your Halloween festivities! While Remco released a true vintage line of Universal Monsters action figures back in 1981, the Invisible Man was not included. Or maybe he was and we just never saw him. Anyways, it's really fantastic that Funko released him as part of their first release of Universal Monsters ReAction figures as I can see collectors of that vintage line wanting to include him in their sets. If you've never seen The Invisible Man, check it out. Even though the film is now over 80 years old it still manages to be a fun and wacky sci-fi film with some truly suspenseful moments and special effects that are still fun to watch. Ready for a closer look at the Invisible Man? Then join me after the break... 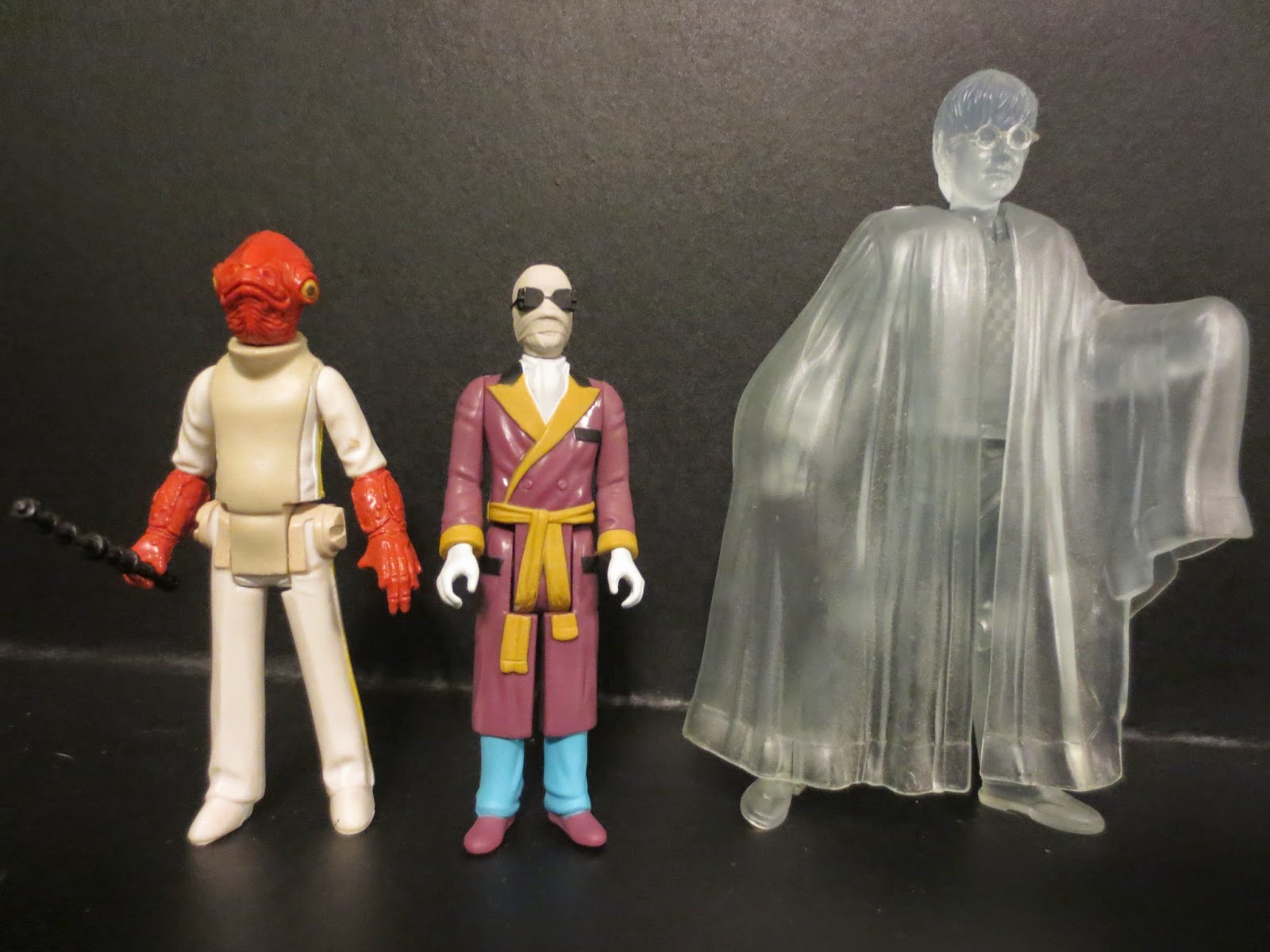 Capturing the slimness and size of vintage action figures from the late 1970s and early 1980s, the Invisible Man stands around 3 7/8 inches tall and features a rather neutral pose. I think FunKo has a real challenge when designing these figures: If they're too modern looking fans are going to reject them for missing the point and perhaps judge them by modern standards such as pointing out the lack of articulation, but if they're too vintage looking I think the buying audience for these definitely shrinks as casual buyers are more likely to just pass them by. Fortunately, the Invisible Man seems to very nicely walk the thin line between being too modern and too basic. He looks great and should fit in with any retro or retro inspired line in this scale. 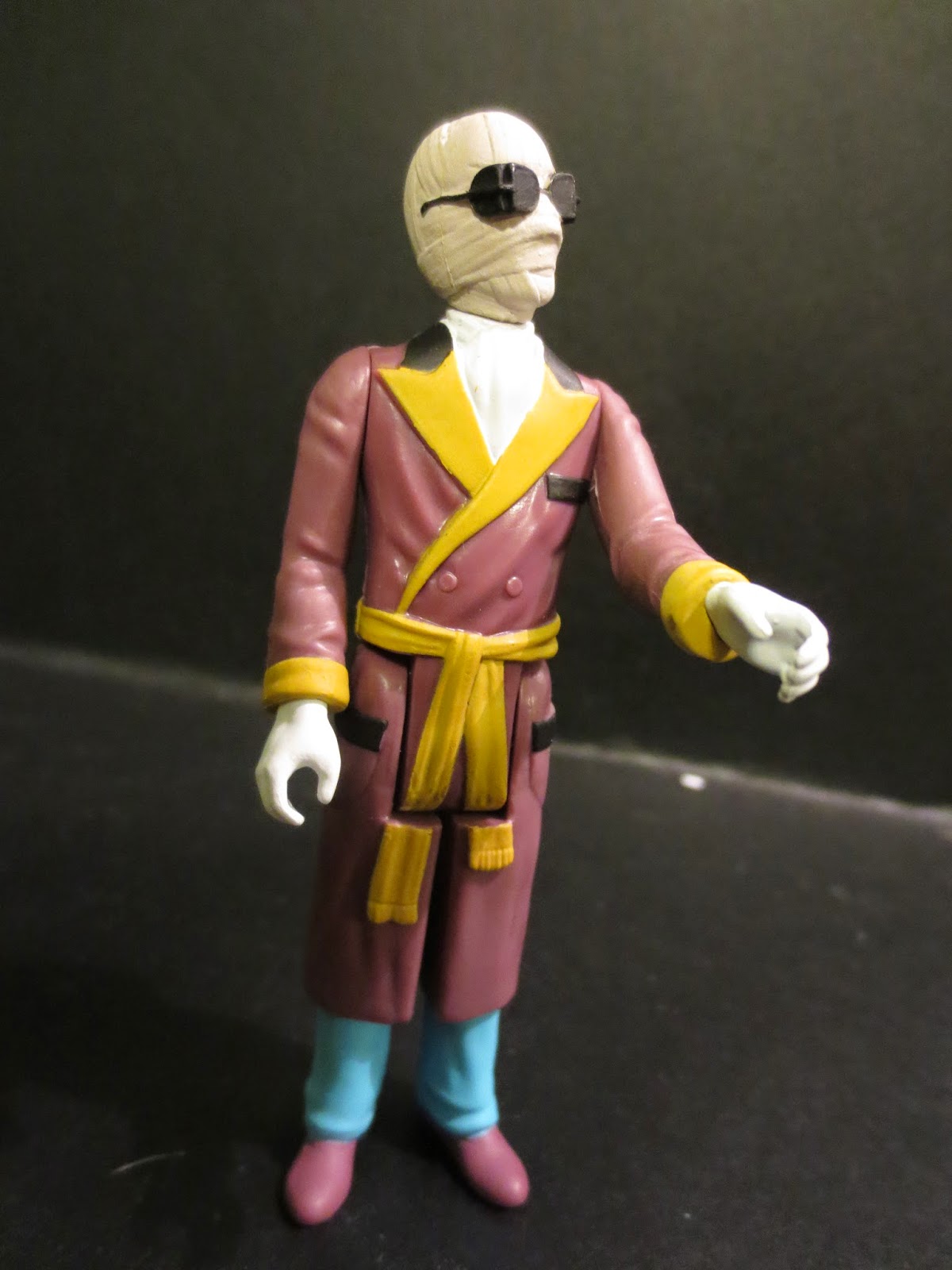 Of course, the five points of articulation on this figure are key to its vintage feel. The swivel hips, swivel shoulders, and swivel neck give just enough articulation to allow Mr. Man to shake hands with Walrusman, turn his head to the left to check out the Bride of Frankenstein, and kick an invisible football. He feels really solid, however. I like the plastic quality on the Universal Monsters ReAction figures. 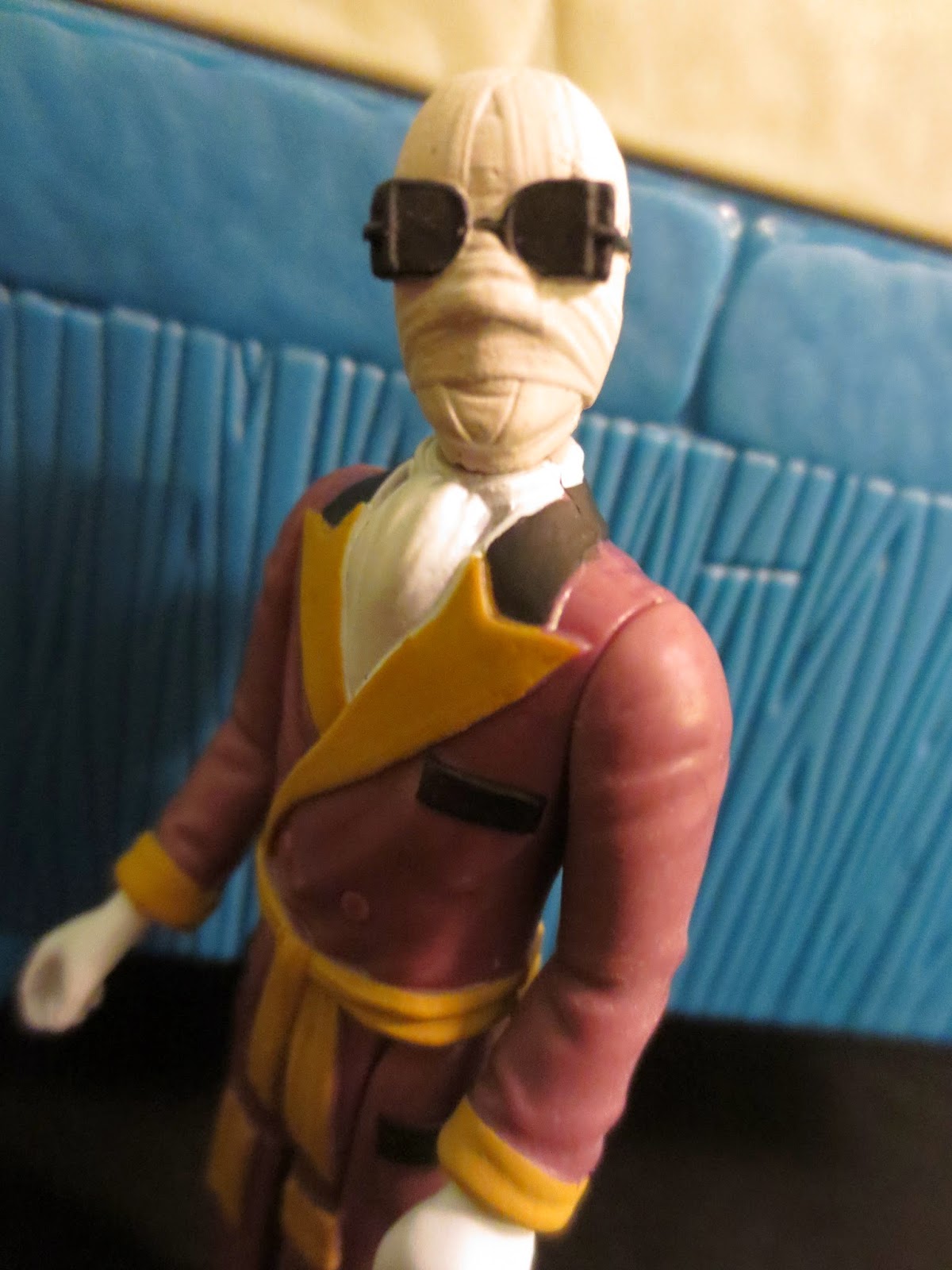 This figure of the Invisible Man captures him in what is probably his most iconic outfit. All of the crucial elements are present: A fully wrapped head, the cool glasses, a scarf, gloves, and the smoking jacket. There's just enough detail on this figure to make him interesting while still keeping him fairly simple. Little details like the buttons and pockets on his jacket and the folds in his outfit all look quite nice. Since he's wearing a long robe, the robe splits in half at his legs (like the vintage Emperor Palpatine). Unfortunately, the two halves just don't fit together flush leading to some weird thigh gap (The Bride of Frankenstein has the same problem, only worse). The head sculpt is impressive, however, and seems a bit more detailed than the rest of the figure. I don't think it's so detailed that it detracts from the whole, however. It looks rather nice with a higher level of small detail, kind of like the 1985 Kenner Star Wars figures. 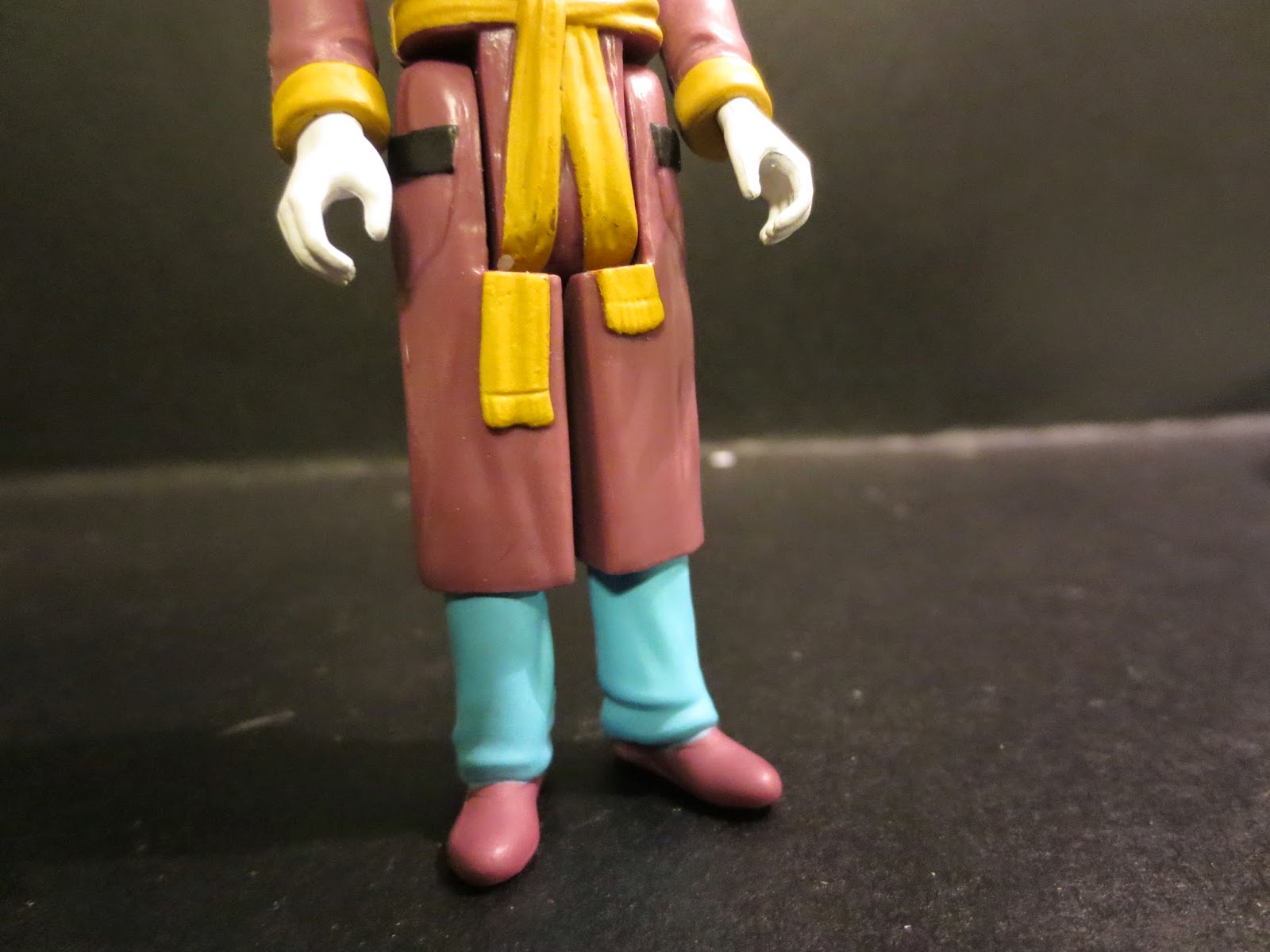 Funko seems to be good about making sure that these Retro figures all have clean, neat paint work. While the patterns are simplified from what we can see in black and white film stills, the hodge-podge nature of Dr. Griffin's ensemble is really nicely represented by a number of colors of clothing. The smoking jacket is a purplish-red color with black and yellow accents while the scarf and gloves are white. Throw in some funky blue pants and a very neat and clean application for the glasses (black on white can be hard to get right) and you have a stellar looking figure. I have no complaints! 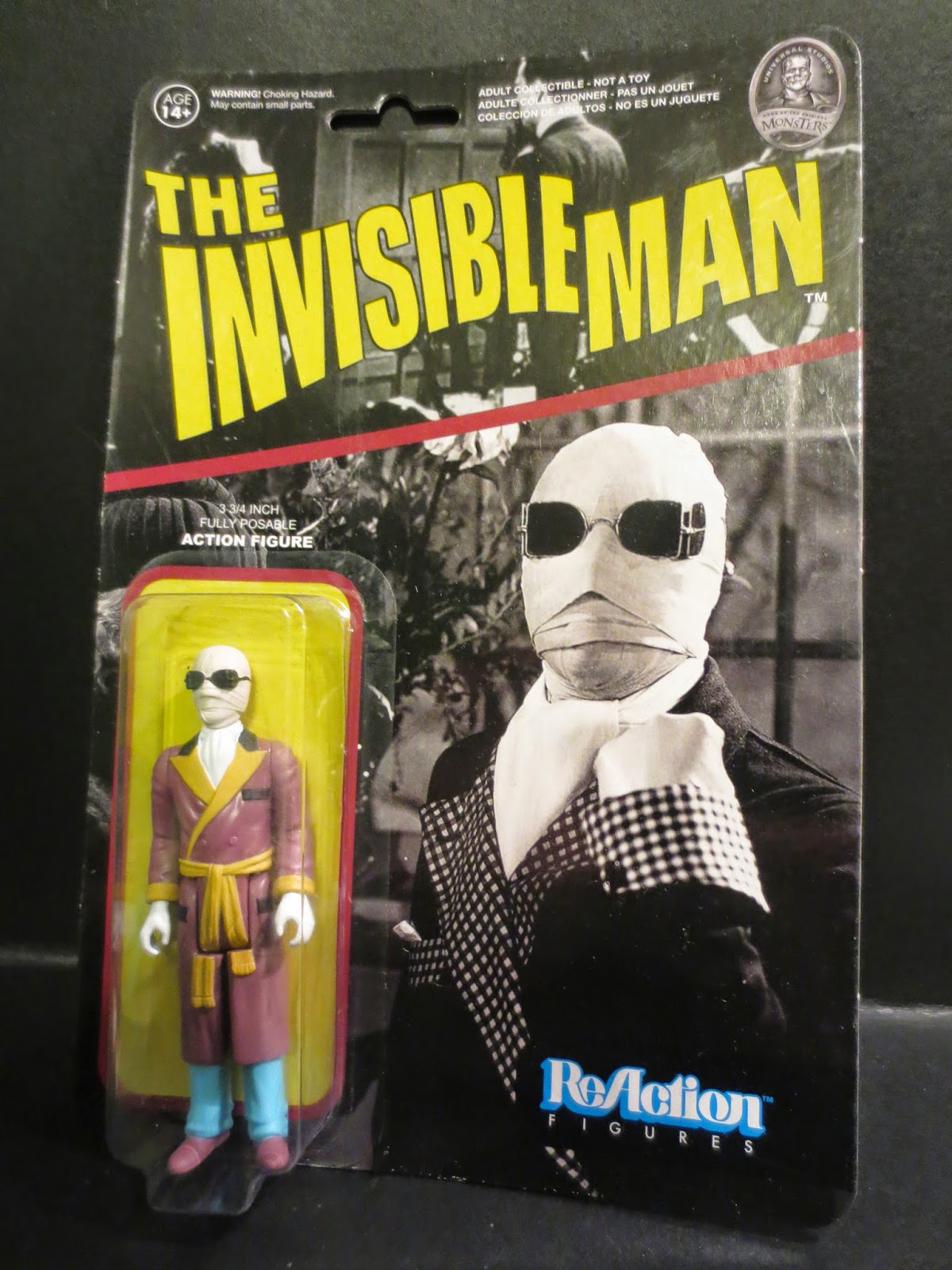 While most of the ReAction figures seem to come with a cool accessory or two, the Universal Monsters figures are all left empty-handed. While there's not any accessory that automatically jumps out at me as being crucial to the Invisible Man, I think even something simple like a test tube or a book would have added some value. I'm just someone who almost always wants figures to come with accessories. 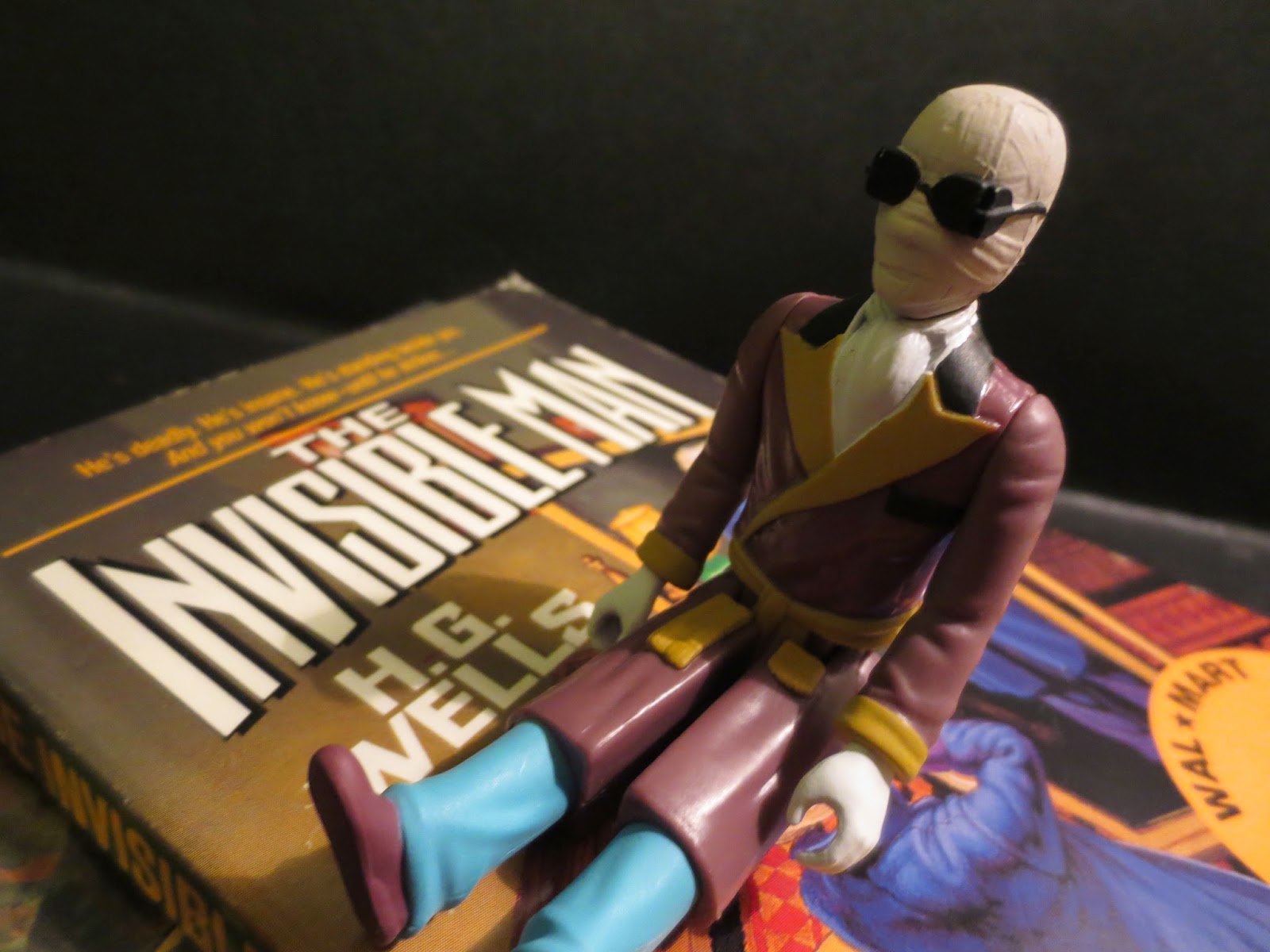 While I think that the Mummy looks more "vintage," ultimately I think I like the Invisible Man a bit better. He's a well designed figure that should be instantly recognizable to most folks due to his eccentric garb. Of course since whether or not one likes action figures is almost always subjective, I do recognize that these guys just aren't for everyone. This is my favorite of the Universal Monsters so far, however, and I'm very content with giving him a Great and a 1/2. I think it's clear why. I mean, my reasoning is transparent, is it not? Surely you can see right through any faults and realize how  great of a toy this is. Are you enjoying these Invisible Man themed puns? If so, then this toy should be right up your alley.

I've reviewed the following ReAction figures as well, FYI:
The Mummy
The Rocketeer
Freddy Krueger from A Nightmare on Elm Street