Scary Toy Review: Pennywise from It from POP! Movies by FunKo 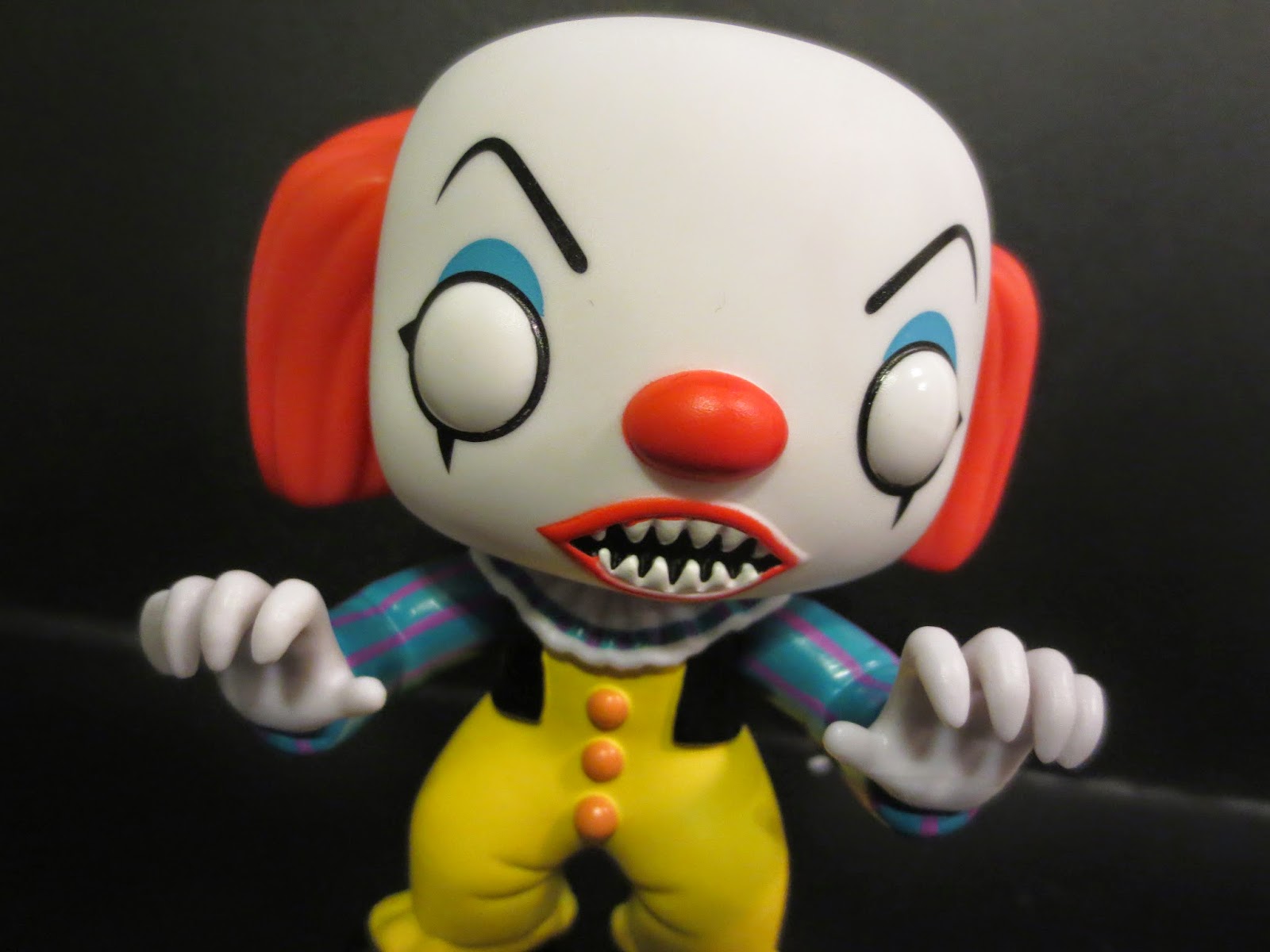 During last year's "31 Days of Toy Terror" I reviewed NECA's bloody version of Carrie from the 2013 adaptation of Carrie. In that review, I talked about how ever since I was a young teenager I've always wanted toys based off of the works of Stephen King. For years the only thing I had was a die-cast Christine from Johnny Lightning, so finally having a Carrie action figure was a big deal. This year, not only is there an action figure of Stephen King himself from NECA's new The Simpsons line but we also now have this toy of Pennywise the Dancing Clown from the 1990 TV adaptation of King's novel It. Part of the movie branch pf FunKo's expansive POP! vinyls toyline, Pennywise is a stylized interpretation of Tim Curry's portrayal of the titular demonic entity in its favored guise of a creepy clown. Since so many people are terrified of clowns (which is called coulrophobia), I think Pennywise is an excellent subject for a review as we look forward to Halloween, don't you? For more evil clown goodness, join me after the break... 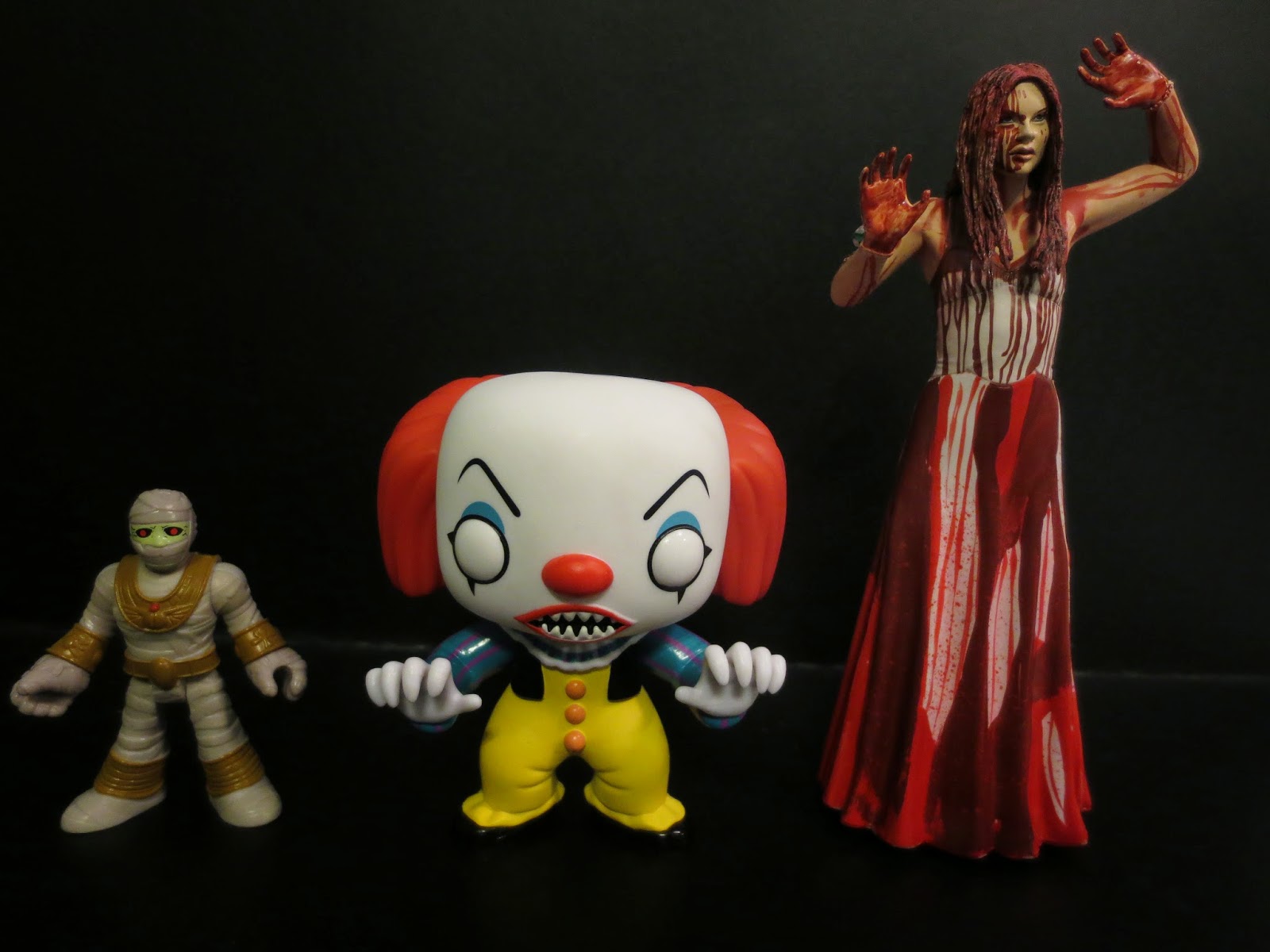 Like most POP! figures, Pennywise stands just a little under 4 inches. I think by now everyone is familiar with these figures so the chibi influenced style that features a large head with pupil-less eyes on top of a smaller body shouldn't be much of a shocker to you. While FunKo keeps these guys rather simple, unlike some other vinyl figures most of the detail is accomplished through sculpting (not just paint). The head is made of a softer vinyl material while the body is made of a harder plastic. Pennywise is #55 in the POP! Movies subset.

The only articulation Pennywise has is a swivel neck which allows him to eerily look to his left and right. He stands quite well on his own although, due to his hair, he tends to topple over rather easily if bumped. I know these figures all have a similar stance, but I do like the decision to give Pennywise a creepy "hands out as if to grab you" pose. He looks great! 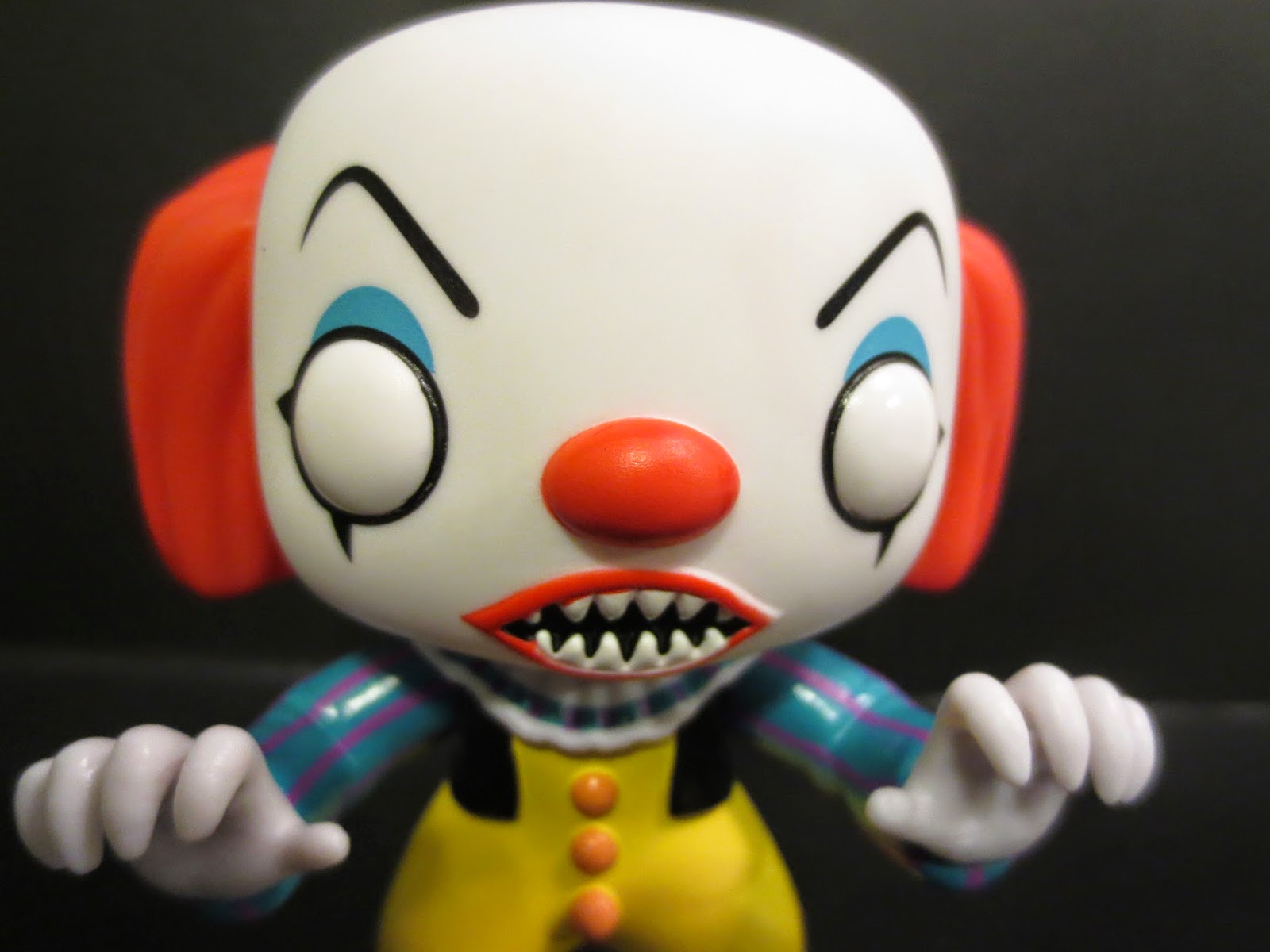 While a casual observer might just see this as a generic evil clown (which makes this toy no less disturbing), comparing the toy to some images of Tim Curry's portrayal of the character definitely shows some fine attention to detail. Even though the style of these figures is to simplify the characters, the big fluffy buttons on Pennywise's outfit, his vest, and the frilly collar all match the onscreen look. The sculpted facial details like the Bozo-esque hair and sharp teeth also greatly help to add to the unique look of Pennywise. The creepy, pointed fingers definitely bring everything over the edge in making this a scary little guy that anyone who hates clowns will definitely shy away from. 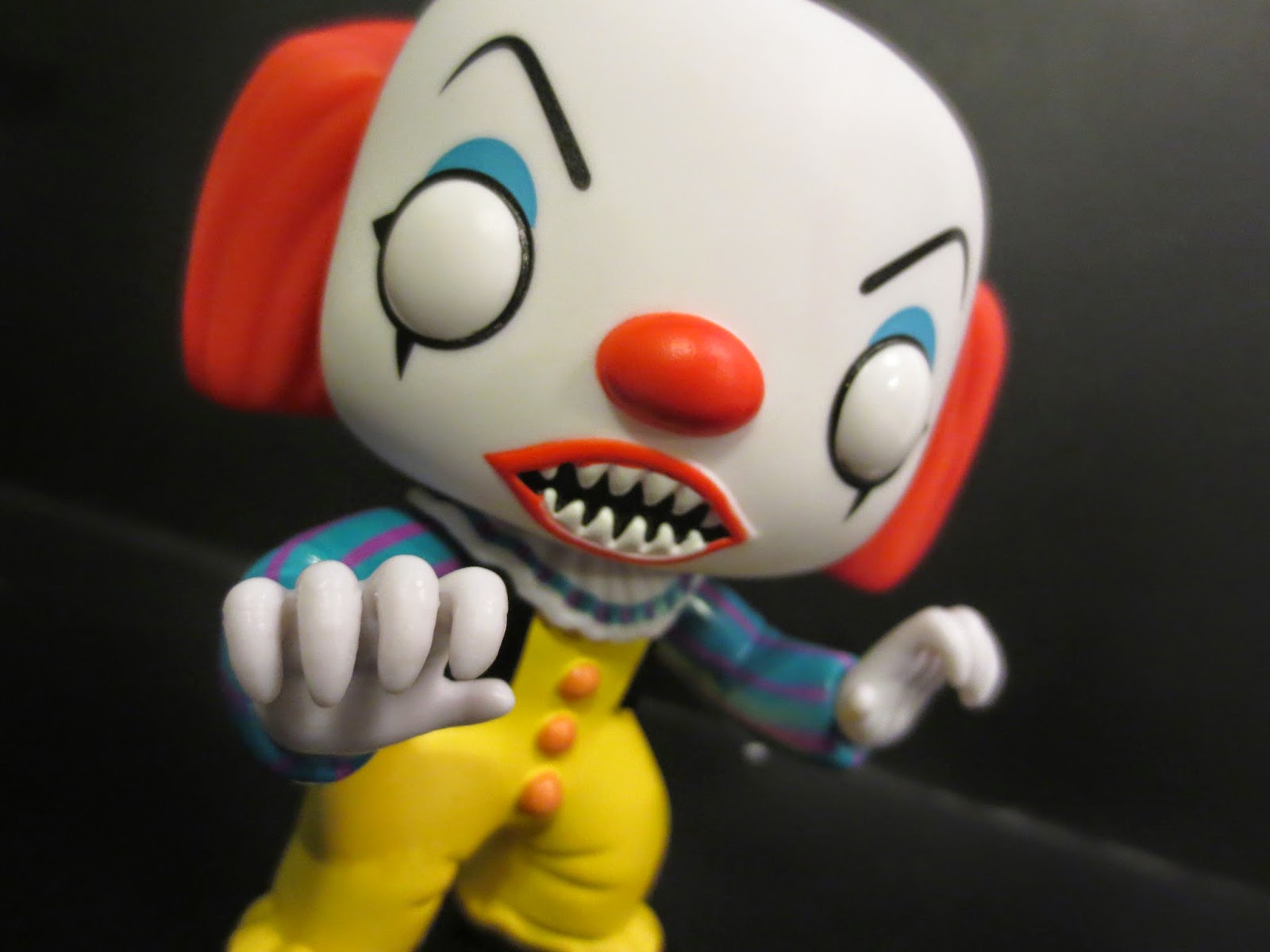 The paintwork is solid all around. It's interesting to have a horror figure in such bright colors, but it definitely works. While the colors and patterns of the outfit are definitely simplified there's no doubt that this is Pennywise's garish outfit. I'm really impressed by the stripes on the sleeves and on the collar. There's a little bleed from the lips to the teeth, but for the most part everything looks good. The eyes are very well done and perfectly capture Pennywise's face paint. 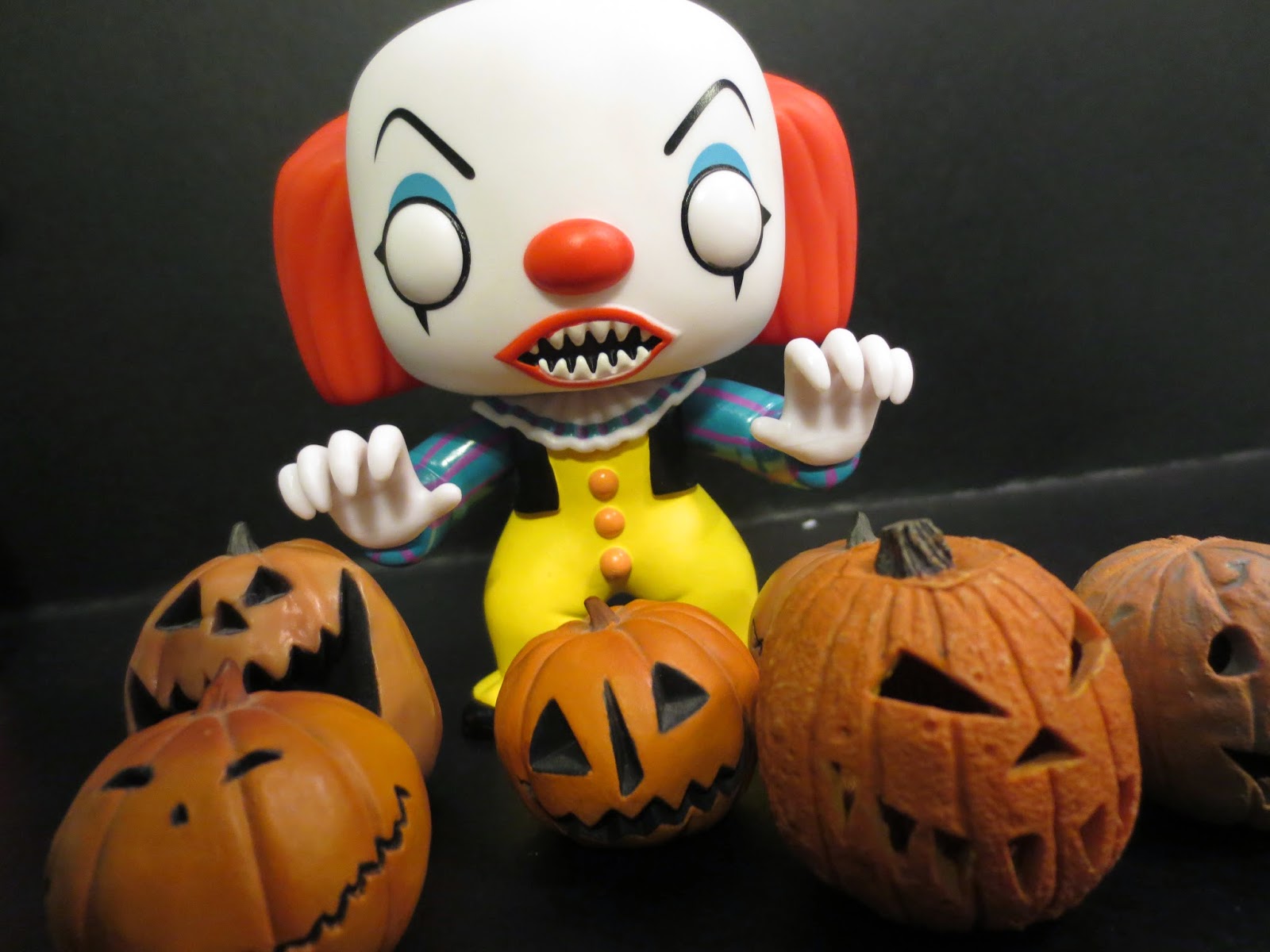 Pennywise, like pretty much every other Funko POP! vinyl that I'm aware of, does not come with any accessories. 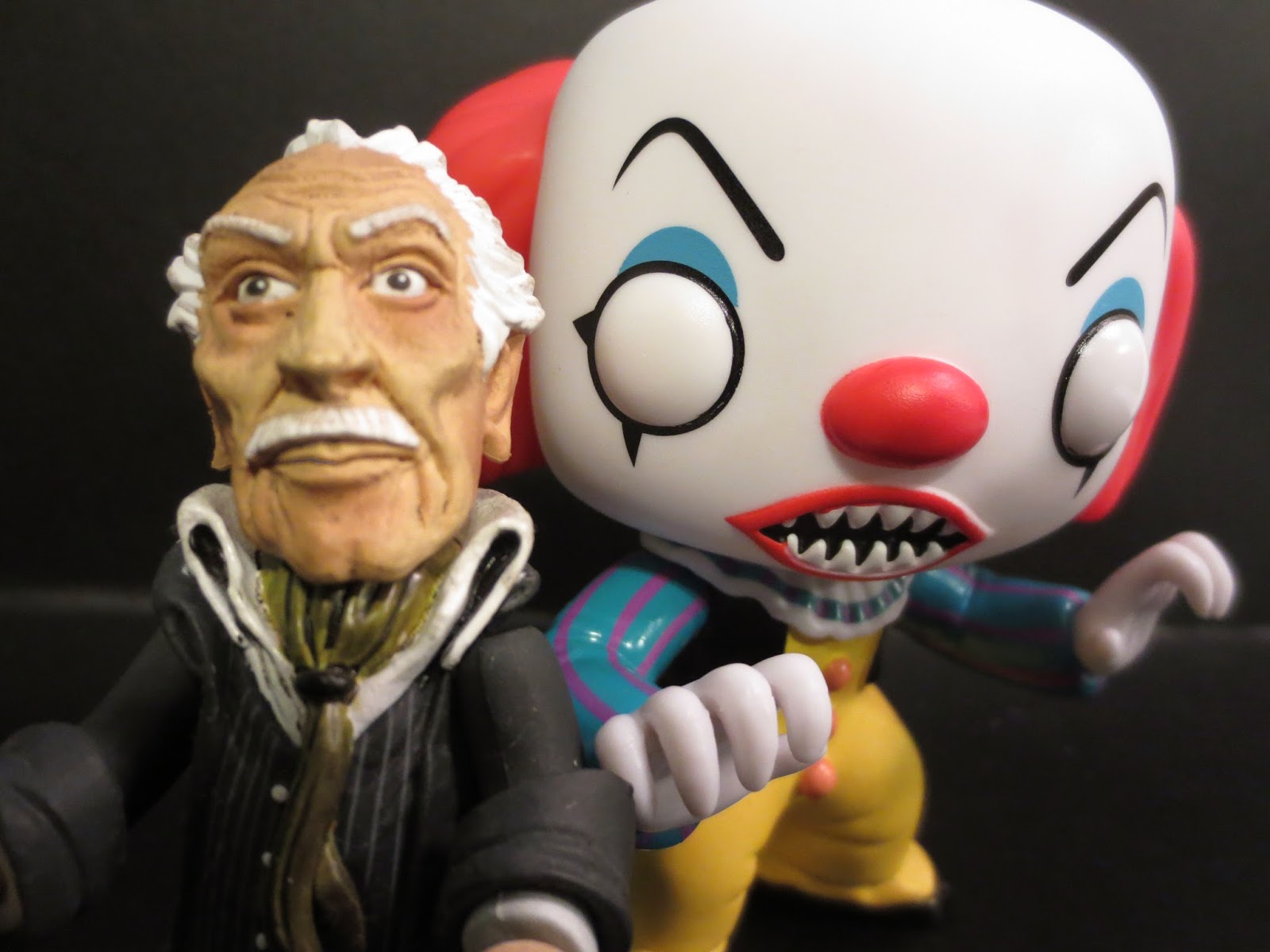 While I'm not sure that I would have listed Pennywise very high on a list of my favorite horror villains, having the figure in hand is very cool. As a Stephen King fan, it's always exciting to me to see the author's fictional creations come to life in plastic. While I still long for the day when someone like FunKo or NECA creates a "Nightmares of Stephen King" action figure line, in the meantime I'm quite content to slowly add a piece here and a piece there to my growing collection. Pennywise is a fun, colorful vinyl that might not be instantly recognizable from the rest of the evil clowns out there, but will definitely put a very nervous grin on the faces of those who do recognize him. I've seen a lot of POP! figures and I think the sculpt and paintwork here is easily among some of the best. I'm giving him a Great.

I've only reviewed one other POP! vinyl figure on here: Sam from Trick 'r Treat.