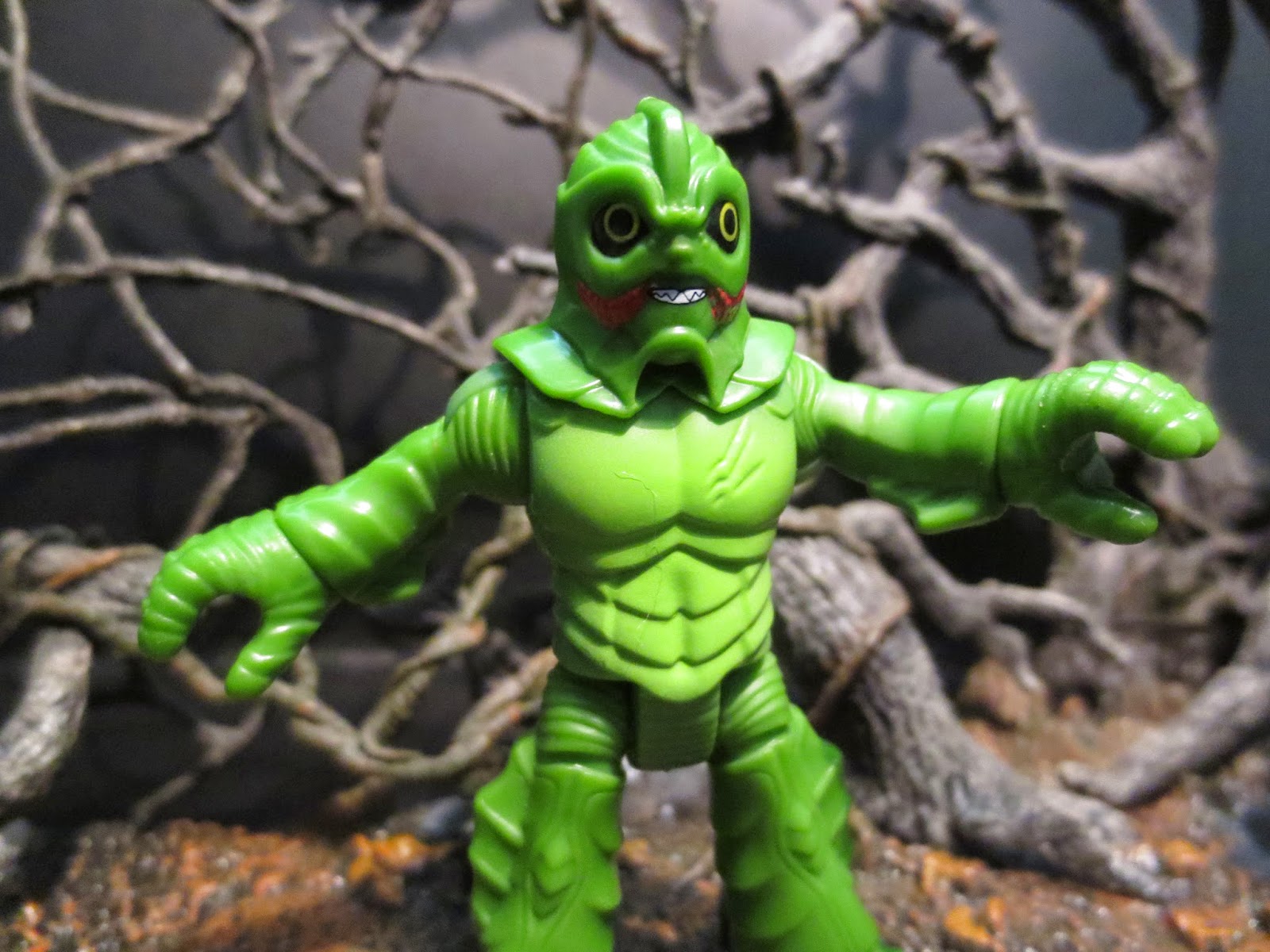 Late this  past summer, Imaginext released their third series of blind-bagged collectible figures to eager kids and collectors. While I largely avoid the vehicles and playsets due to lack of space, I pick up cool Imaginext figures whenever I can. One of the coolest from the most recent series is the subject of today's review: Gillman! While the Creature from the Black Lagoon is one of the few of the prominent Universal Monsters who was created specifically for a film, we often see non-licensed homages to the guy where he is referred to as simply the Creature, the sea creature, or the Gill-man. Of course, there are also plenty of variant mer-creatures such as Cousin Gilbert, Mer-Man, and the beloved Old Gregg. As Halloween quickly approaches, perhaps we should spend some time beneath the surface and contemplate the horror of the Gillman. Join me for another always frightening, slightly fishy, review after the break... 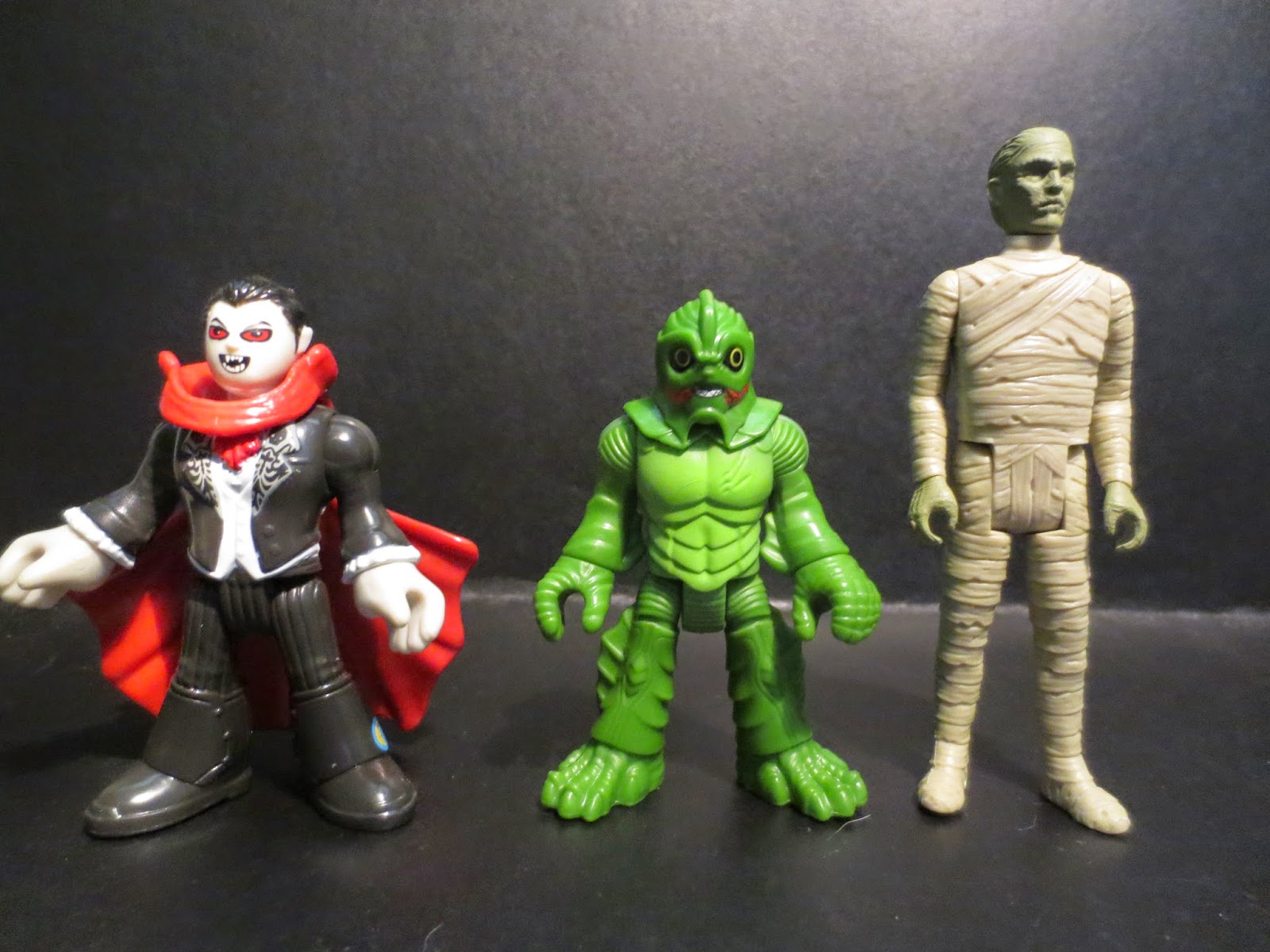 Like most other Imaginext figures, Gillman stands around 2 7/8 inches tall. The Imaginext figures, unlike many other similar lines like Lego Minifigures or Playmobil, typically feature unique sculpting rather than just paint applications to bring a character to life. Gillman features the same slightly exaggerated proportions as his other Imaginext brethren such as enlarged hands and feet and a wide stance. While the Imaginext figures are sold blind-bagged, technically they've given folks a way to identify them rather than just standing in the toy aisle looking shifty by trying to feel what's in the pack. Each figure has a number stamped on the outside of the bag to help make identification easier (Gillman's is #34). 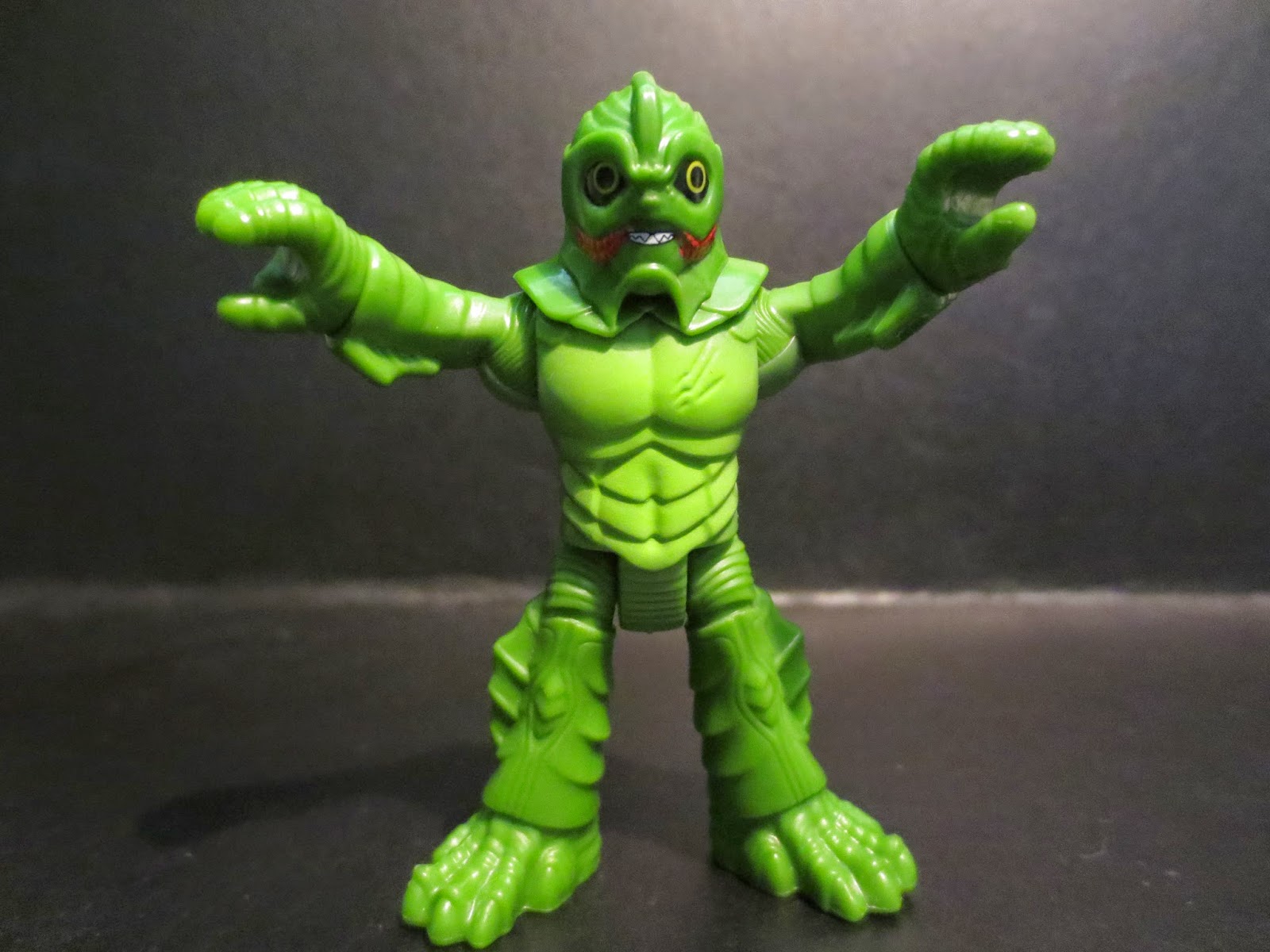 The Gillman features the following points of articulation: hinged legs, swivel/hinge shoulders, and swivel wrists. Due to his funky fish-like head, the Gillman doesn't have a neck swivel. I'll also point out that his legs are connected. Like other Imaginext figures the legs move as one piece, similar to a Playmobil figure). He feels solid and sturdy and can even hold his included trident with both hands. 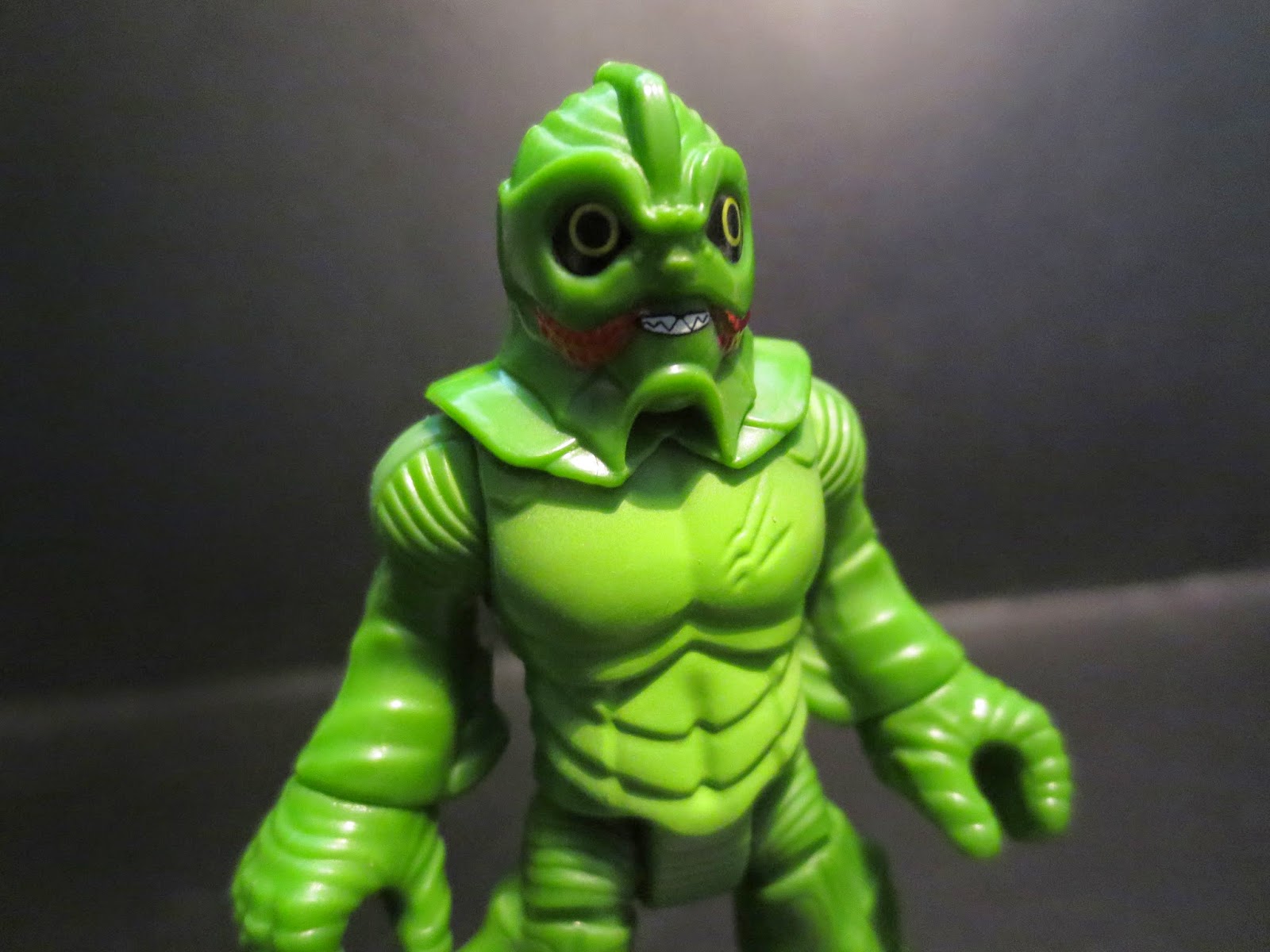 As far as I can tell, every piece of the Gillman is unique. His entire body is covered with slimy scales and fins. This is some rather impressive sculpting, particularly for a figure that is under 3 inches tall. I love the traditional scales on his back and the more plated armor on his chest and legs. There are even some little scratches on his chest, remnants of some undersea battle no doubt! 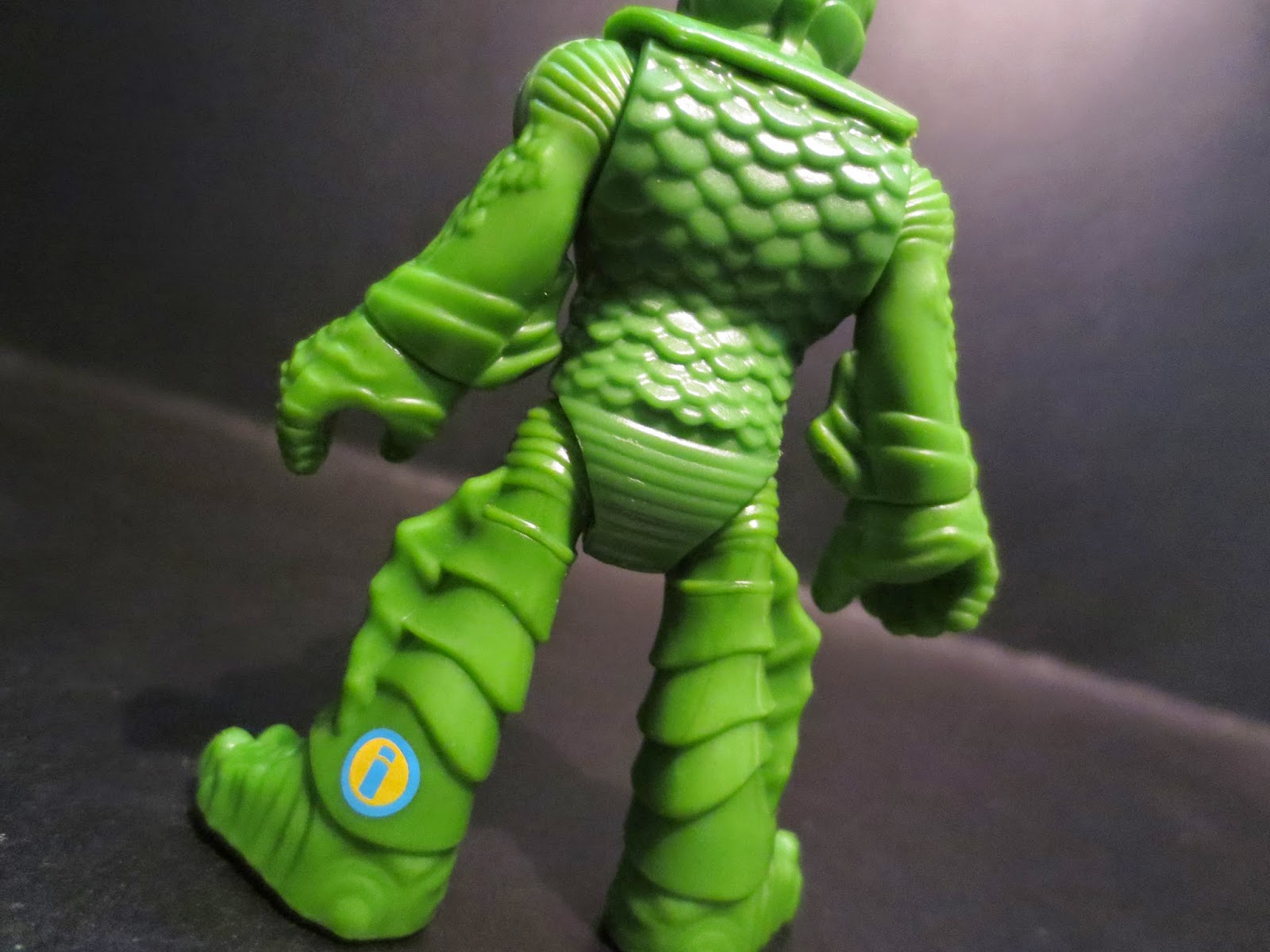 The paintwork is also impressive. While most of the figure is molded in a great "Gilly-Green" color, a lighter lime green covers his belly to break up the monotony. His eyes and teeth are painted on, rather than being fully sculpted elements, but they look great. There is also a little Imaginext symbol on his left rear leg which seems to be a hallmark little detail of this line. 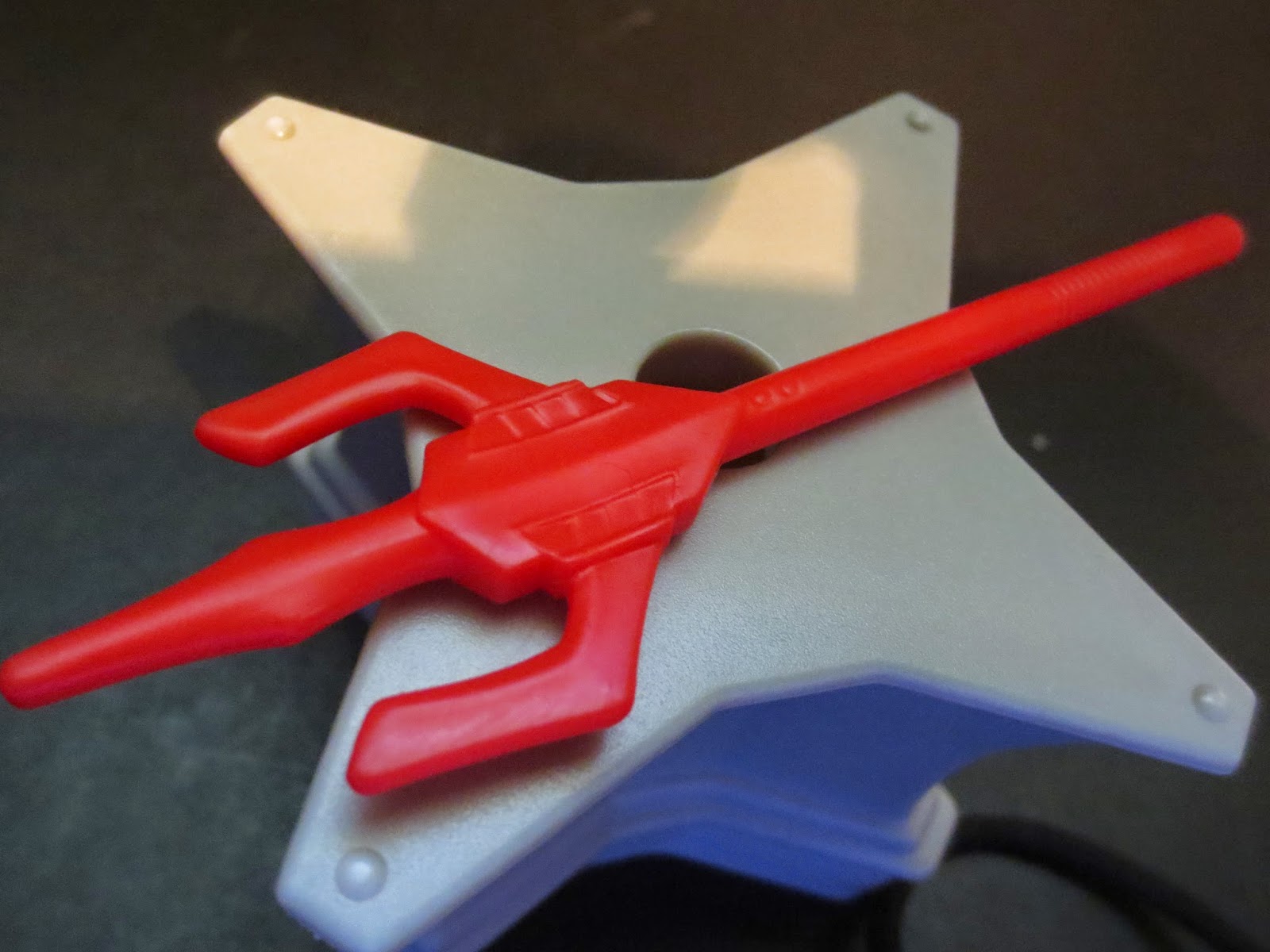 The Gillman comes with two very cool accessories: A trident and a diving helmet. The trident is a simple accessory molded in red plastic but it looks awesome. It is a bit "techy" (did this piece originally come with another figure?) but looks just fine for a more high tech Gillman. I say more high tech because this Gillman comes with his own diving helmet. Can't Gillman breathe underwater you might ask?  Of course he can! That's why the translucent blue dome of this helmet looks as if it has water in it. Yup, just like Fearless Fish in the Sweet Pickles books, Gillman has a breathing helmet that allows him to hang out on land. The paint work is a little rough on the edges of this accessory, but it still is pretty darn cool. 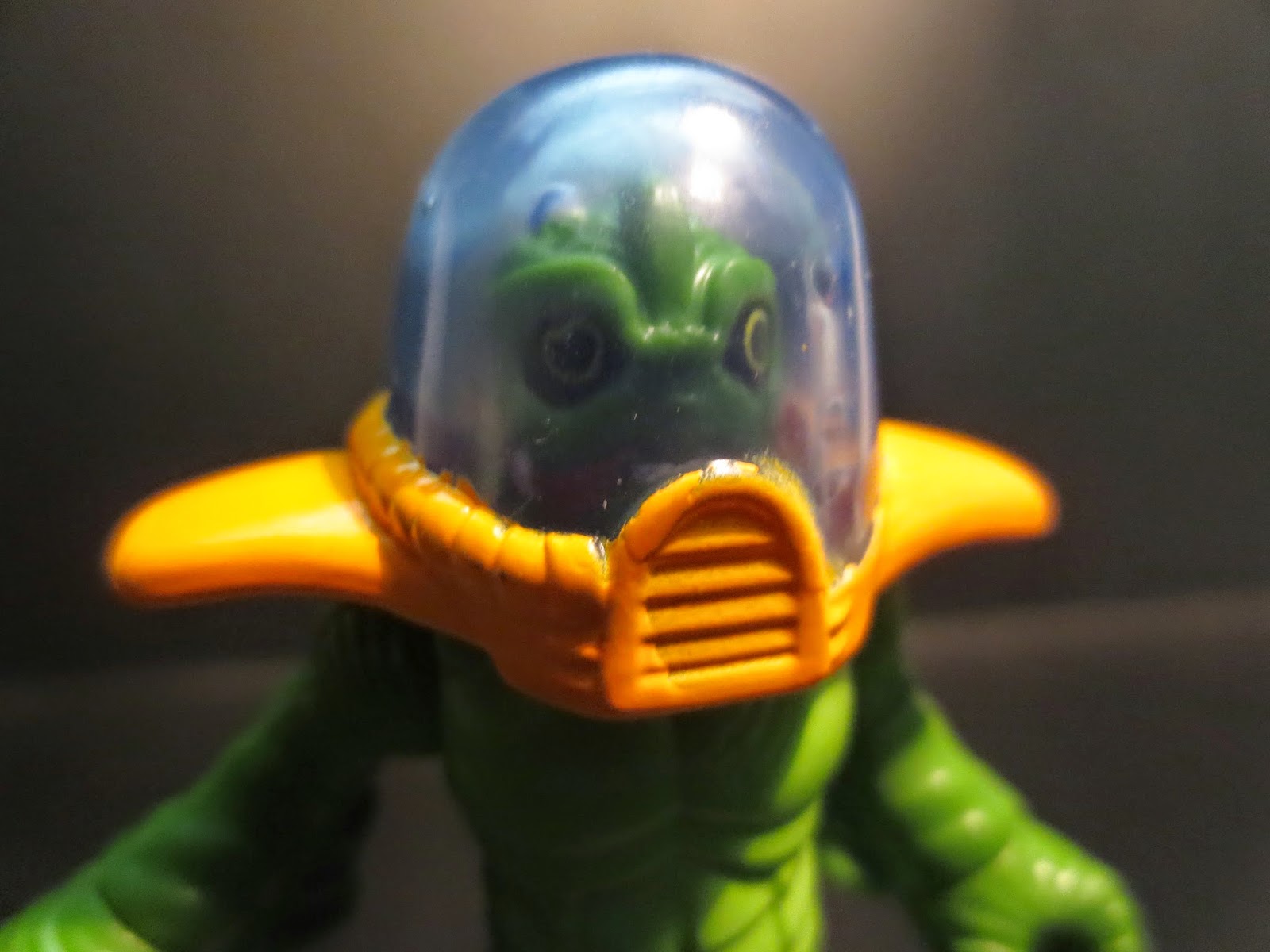 I love that within the first three sets of Imaginext Collectible Figures Fisher-Price has given us four of the five main Universal Monsters (still no Wolfman, though). The Gillman is an excellent release that is just a fun toy all around. Of course, there's also some keen observations from Masters of the Universe fans that Fisher-Price (owned by Mattel) has slipped plenty of nods to MOTU into their Imaginext stuff. Is the Gillman as much of a nod to the Creature from the Black Lagoon as he is to Mer-Man? Perhaps. Ultimately, I'm giving this guy a Great and a 1/2. He's a highlight of the third series of these guys and a great example as to why collectors who may have been ignoring Imaginext ought to give it a glance. These are just great toys in general!

I've only reviewed one other Imaginext figure on the site, "Bigfoot", but I hope to review a few more this season. I've also reviewed the following sea creature based toys:

Walter Wetsuit and Wavecrawler from Hasbro's Kre-O: Cityville Invasion
The Swamp Creature from Lego's Monster Fighters
Octavia from Masters of the Universe Classics by Mattel
Creature from the Black Lagoon from Monster Force by Playmates