Toys in Costume: Raph the Barbarian from Teenage Mutant Ninja Turtles by Playmates 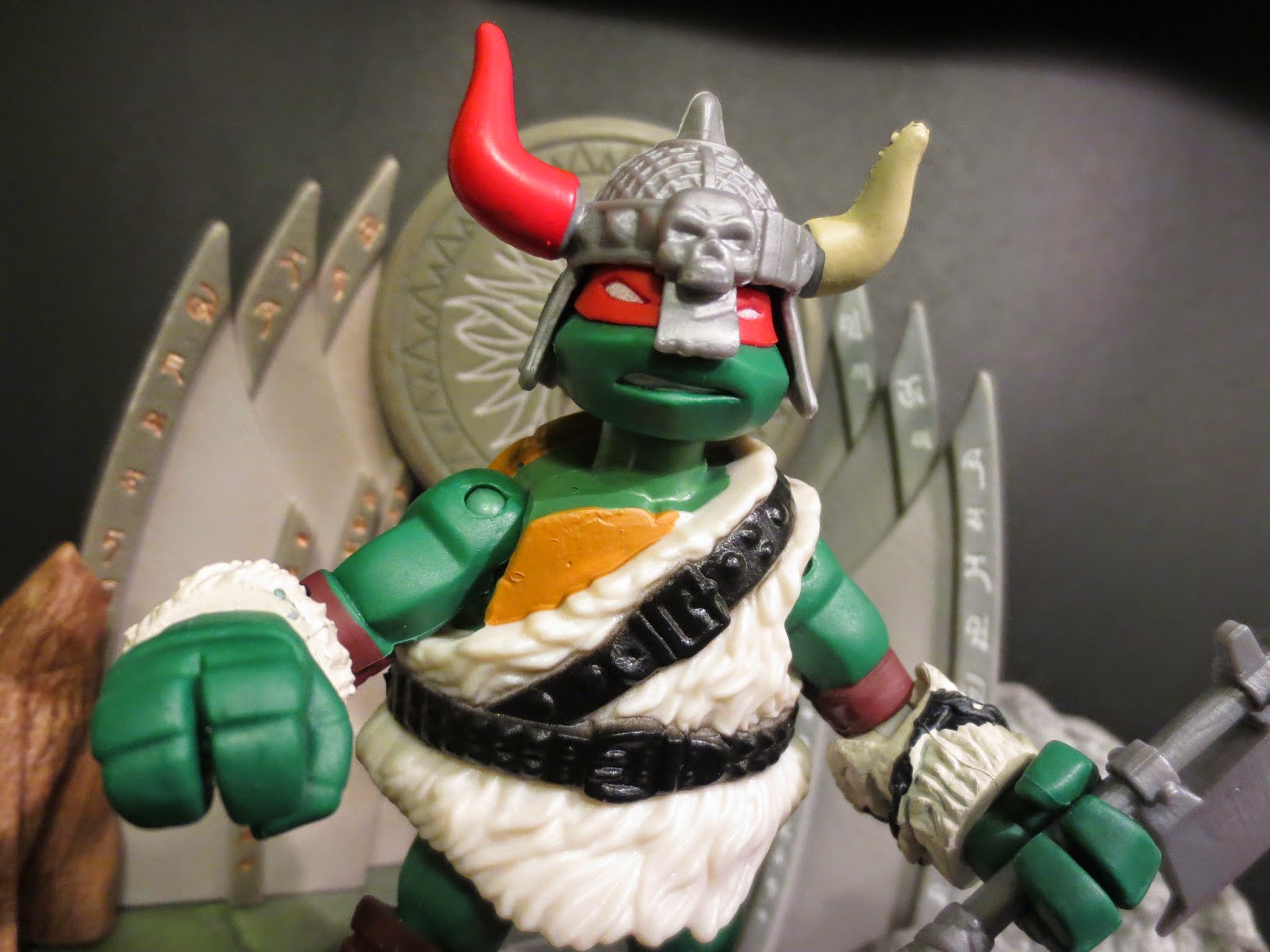 Since I'm watching the new TMNT series on DVD, I'm a little behind (we just watched the first episode of season 2 last night) and so I haven't yet had the privilege of watching the LARP episode "Mazes and Mutants." While the original TMNT toyline features some bizarre fantasy variations of the turtles, it's kind of cool that Playmates used the animated series for inspiration here. Today I'm looking at the first of the four LARP (live action roleplaying) turtles, Raph the Barbarian. I have to say that the barbarian or fighter class makes perfect sense for an angry bruiser like Raphael; he seems like a guy who just enjoys smashing stuff. I found these in the wild over the weekend and decided that the turtles decked out in costumes make perfect sense for a toy review that's helping to pave the way to Halloween. Ready to smash some trolls with Raph the Barbarian? Then join me after the break... 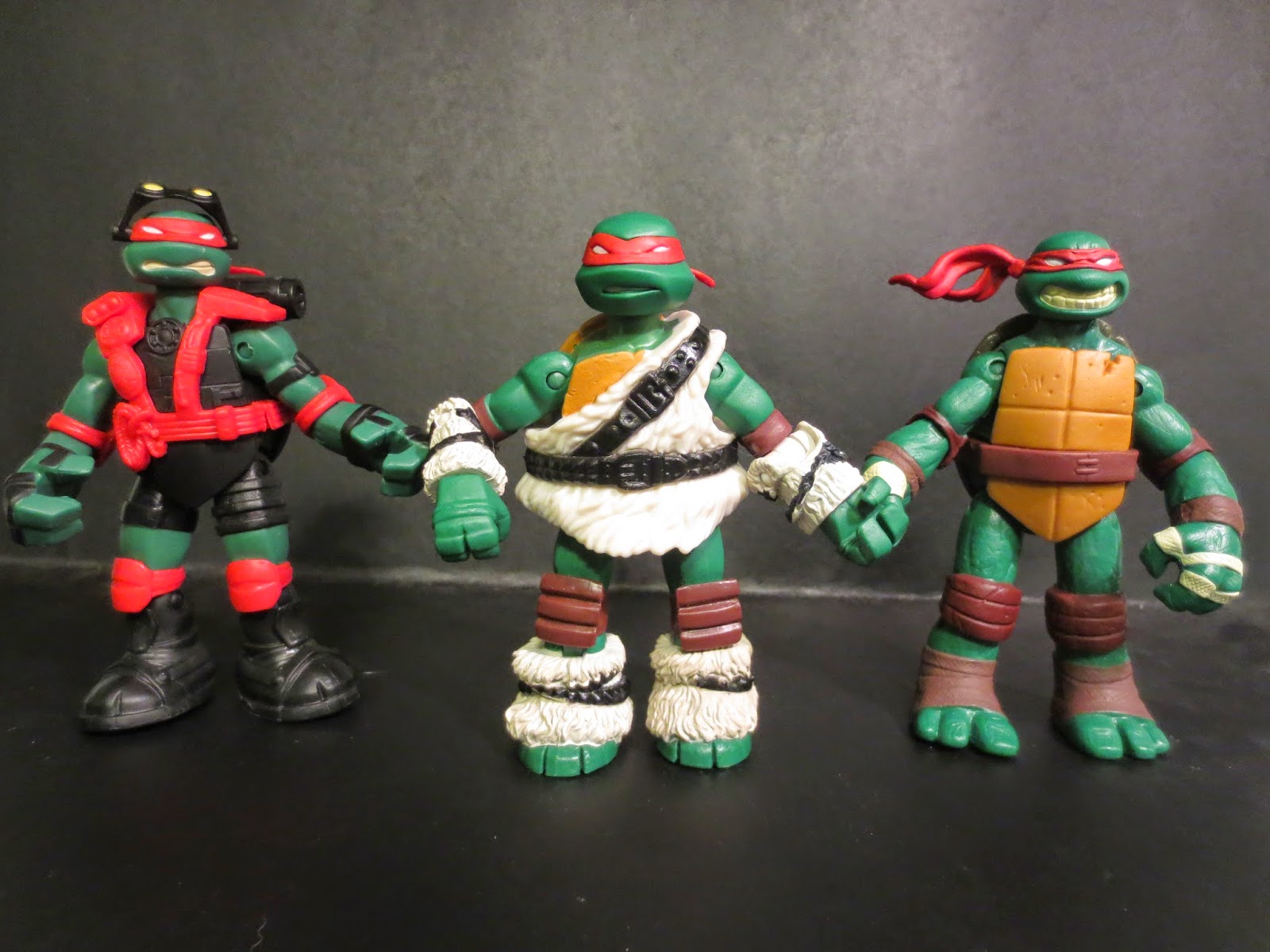 Raphael stands just a little under 4 1/2 inches tall and features the more animated style of the Nickelodeon cartoon which we've seen from the turtles themselves since the Ooze-throwing variants in early 2013. This means smoother skin, more squared off fingers and toes, and simpler face designs. They don't look bad at all, but they are quite different from the basic four turtles we got in this line back in the Fall of 2012. 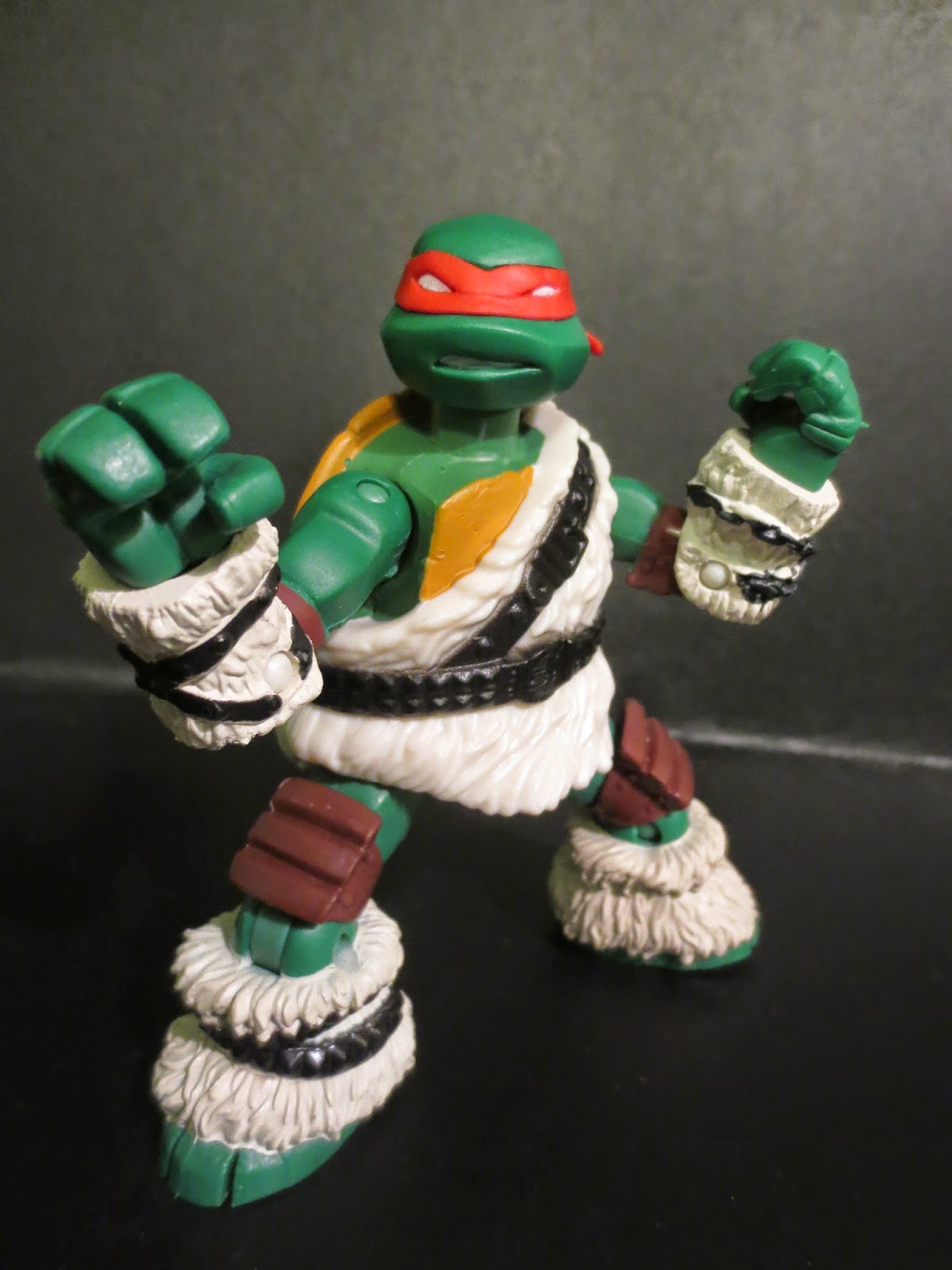 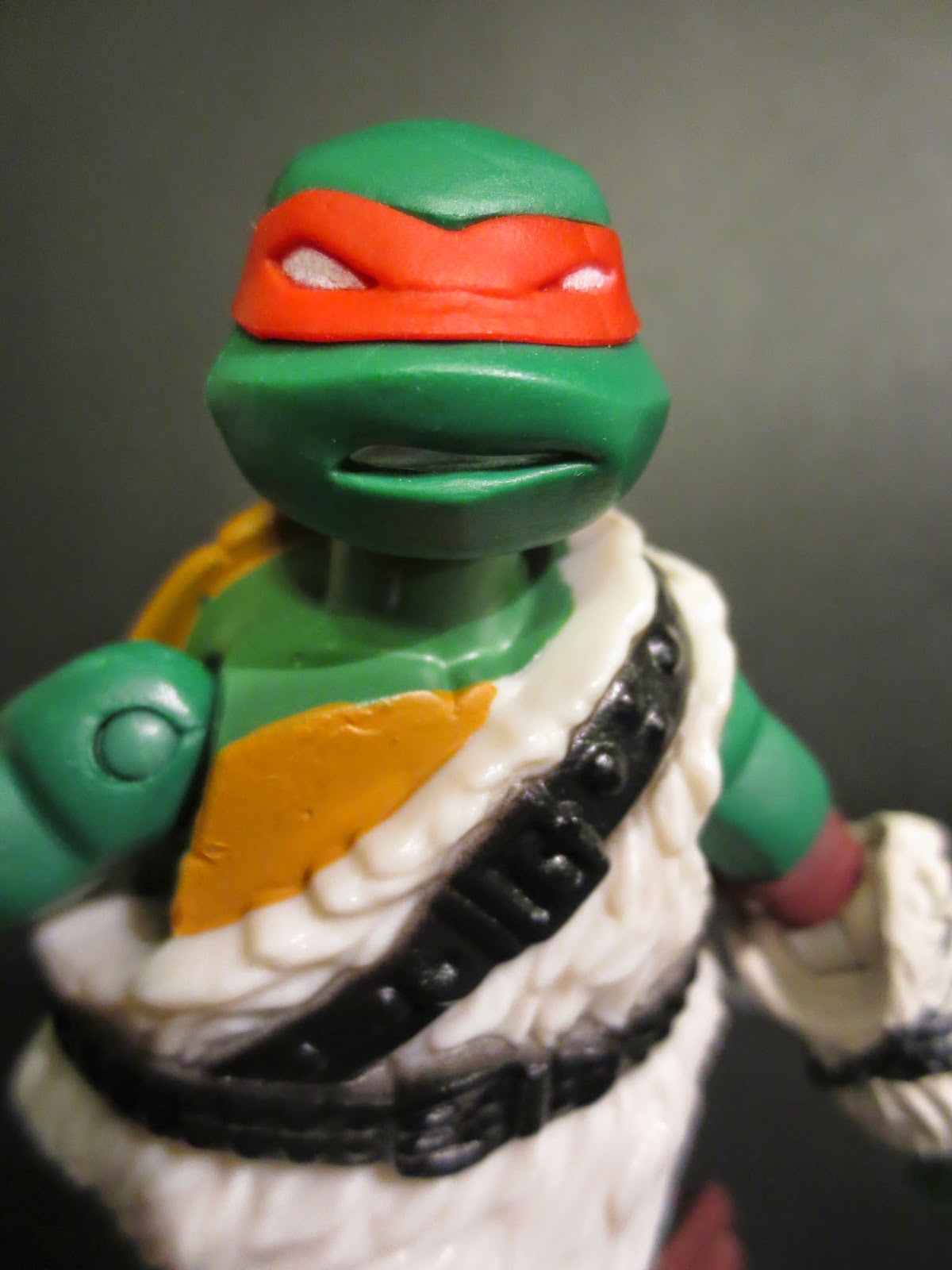 I'm typically happy with Playmates' sculpting as they always manage to cram in some nice details. We've seen the turtles many times, but seeing things like Raphael's furry barbarian tunic, boots, and gloves with added elements like chains definitely helps this guy stand out. I'm really anxious to watch this episode and see what Raph's outfit is made from, as the other turtles clearly have homemade outfits. 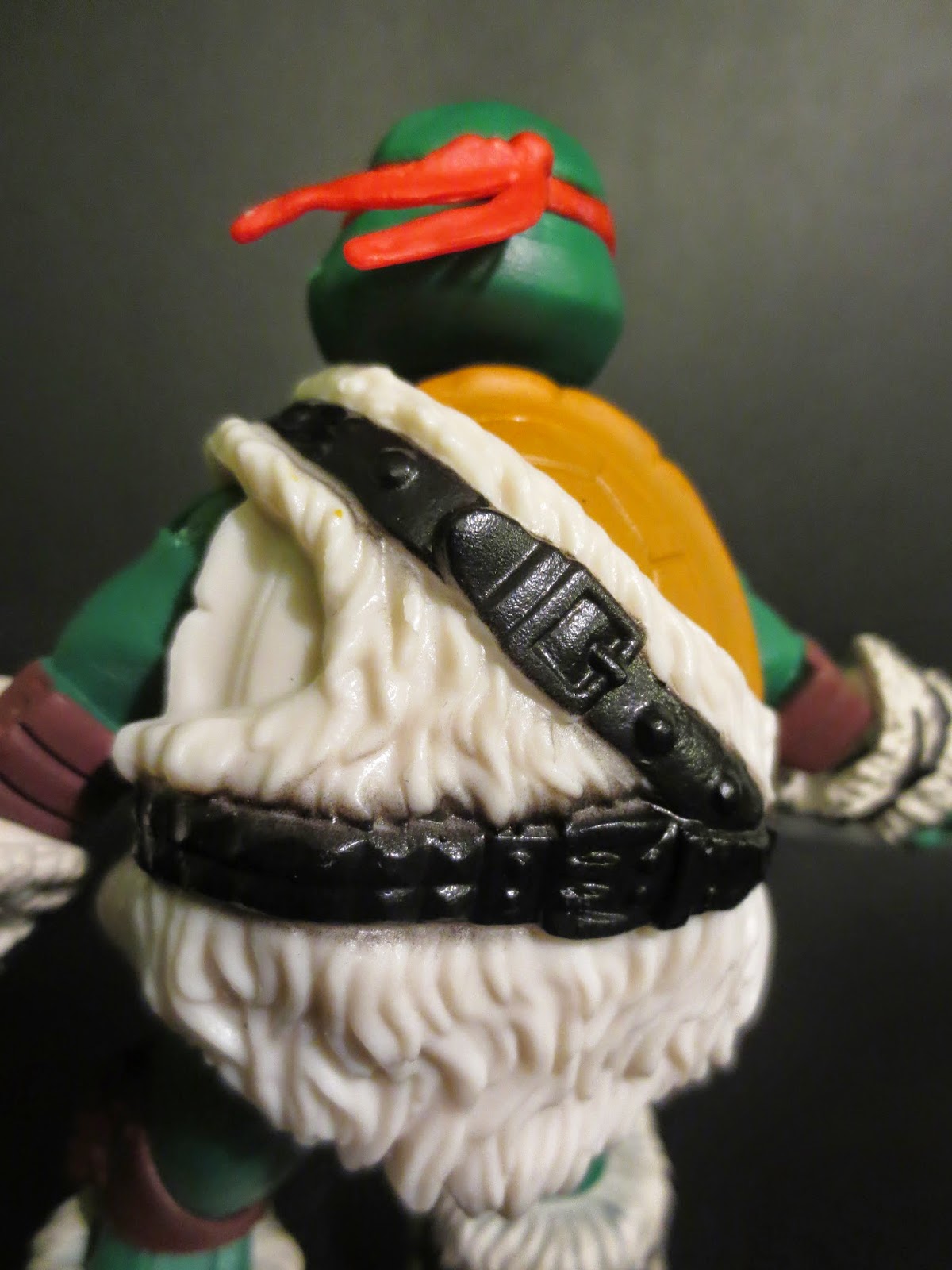 Where I almost always have problems with Playmates is with their paintwork. They tend to use nice colors and have some clean paintwork most of the time, but the often leave details unpainted. From the front, however, Raph the Barbarian looks pretty nice. The chains on his left wrist are pretty sloppy with lots of unpainted spots but overall he looks good. I like the dirty white they chose for Raph's fur outfit. On the back, however, Playmates left a pretty major detail unpainted. Raph's shell. Yes, his shell is poking out from under his tunic in two places and while the top of the shell is painted, strangely it is painted the same mustard yellow color as Raph's plastron and not brown like every other TMNT figure. That's better, though, than the other part of the shell, however, which is left unpainted. It's the same white color as Raph's tunic. 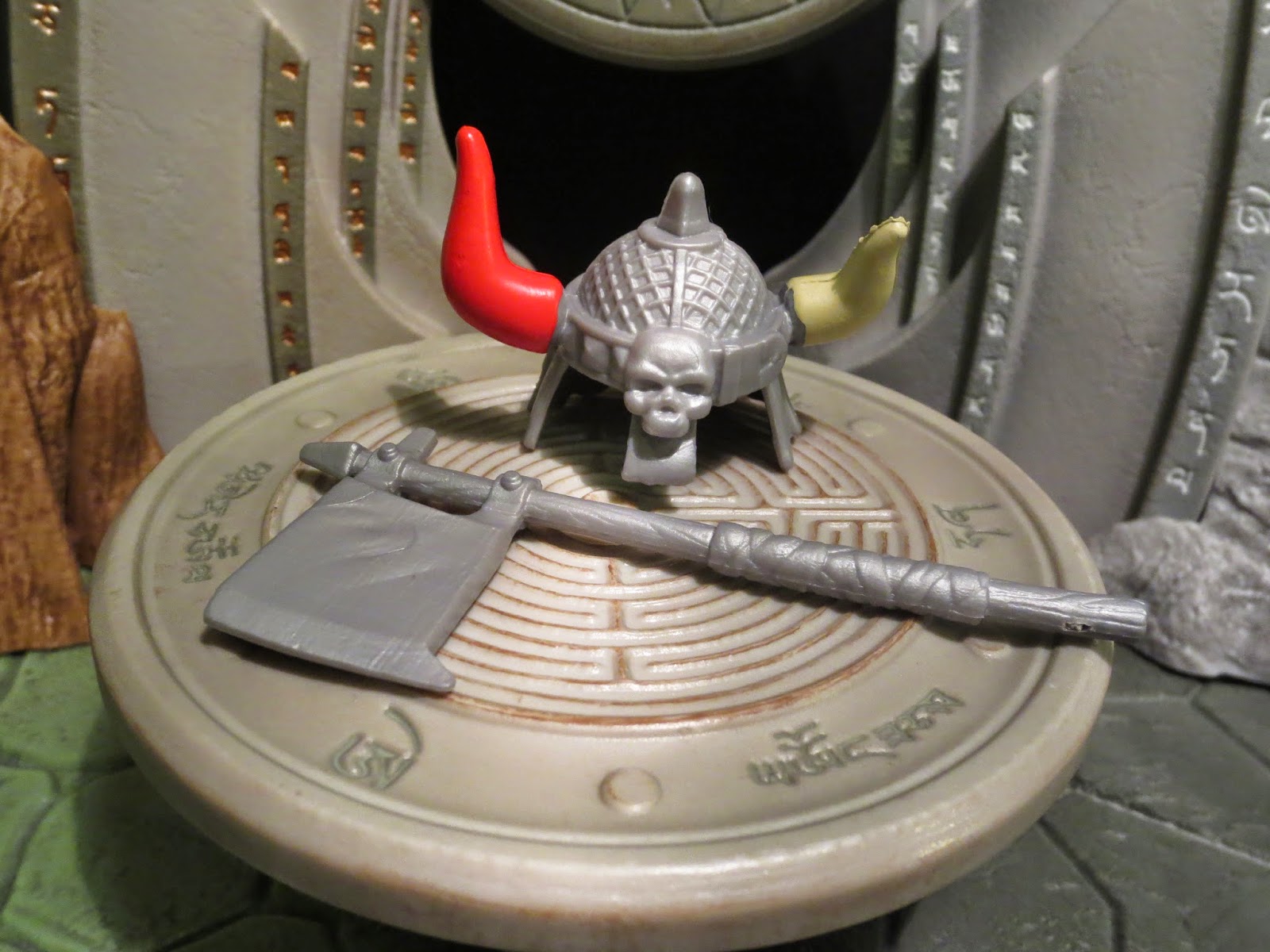 Raph comes with two accessories that nicely complete his barbarian look: a horned helmet and an axe. Both are molded in light gray plastic and feature some nice detailing, particularly the helmet with a skull on its front and a detailed pattern on the helm itself. The two horns receive a paint app: One is red and the other is white. The helmet features a little slit for Raph's bandanna to fit through and he looks great all decked out. With a little effort you can even get him to hold the axe in a two-handed pose. 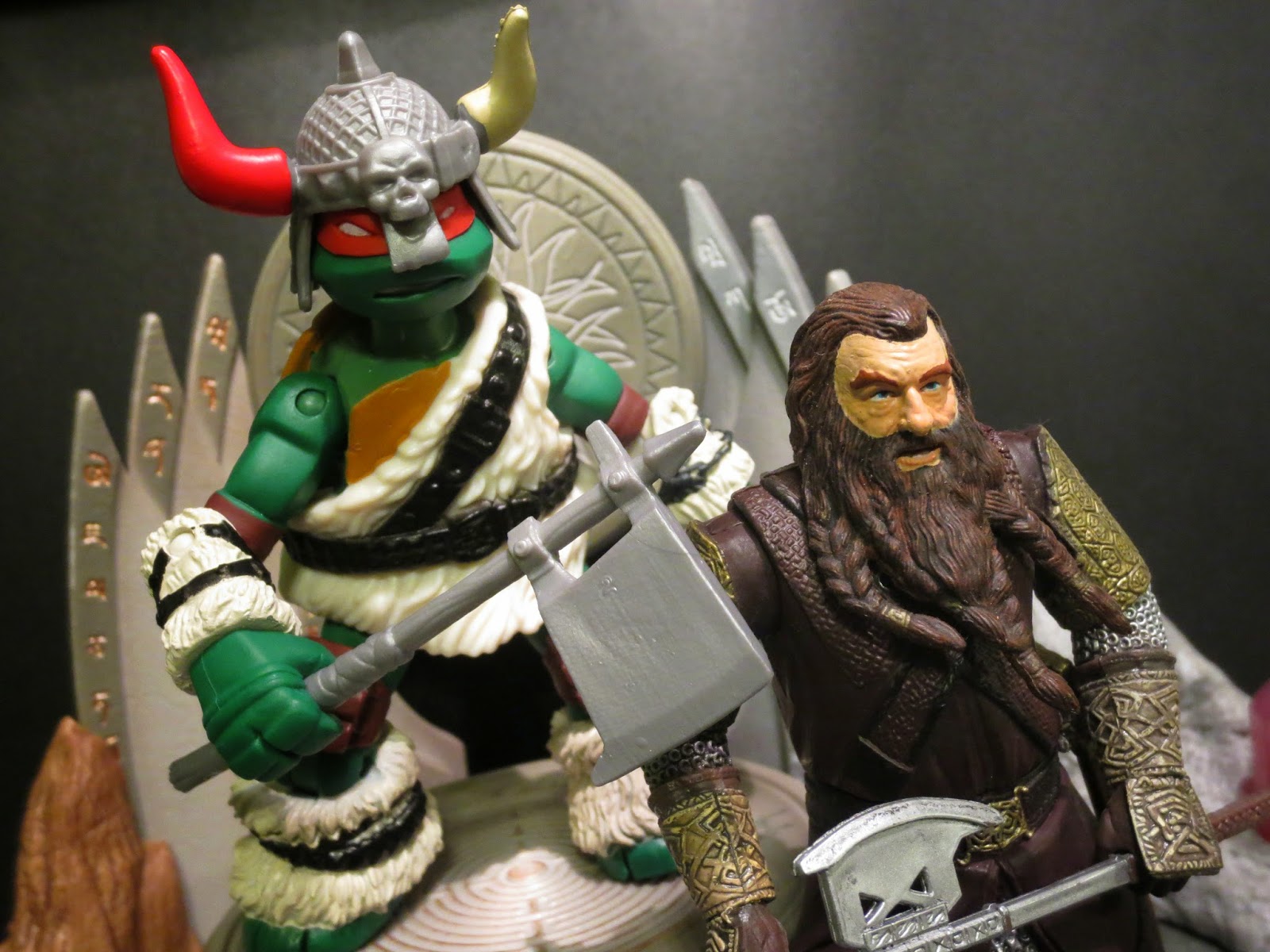 While I complain about the lack of details being painted on these figures, Playmates' TMNT line is still one that keeps my attention whenever it pops up at retail with new releases. I'd been looking for these guys for a few weeks and was thrilled to finally find the set. While I'll always be a fan of the original comics, the vintage toyline, and the 1990 film, I really think that some of the newer forms of TMNT media are the best we've ever gotten. Both the IDW comic series and the new Nickelodeon cartoon are probably some of my favorite versions of the turtles ever. I think this figure brings out the fun, childish nature of the turtles that shines through particularly well in the Nick series. It's a solid toy and a great version of Raphael. I'm giving this guy a Great! Now, to send this guy to plunder the nearest pizzeria.... 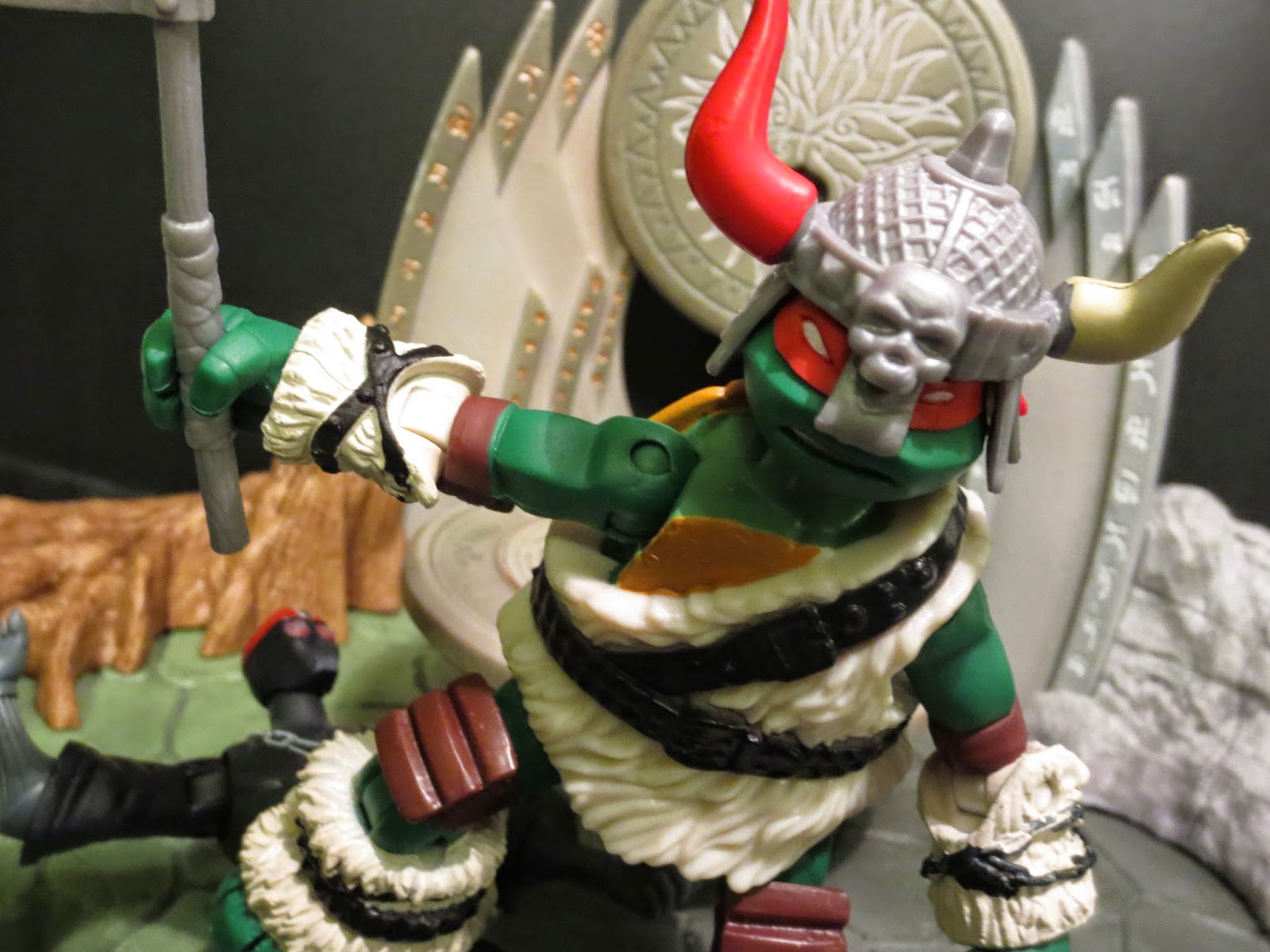 I've reviewed a lot of TMNT toys on the site, including these from the Nickelodeon based line:

And a few from the new movie: