31 Days of Toy Terror: Alucard from Castlevania by NECA 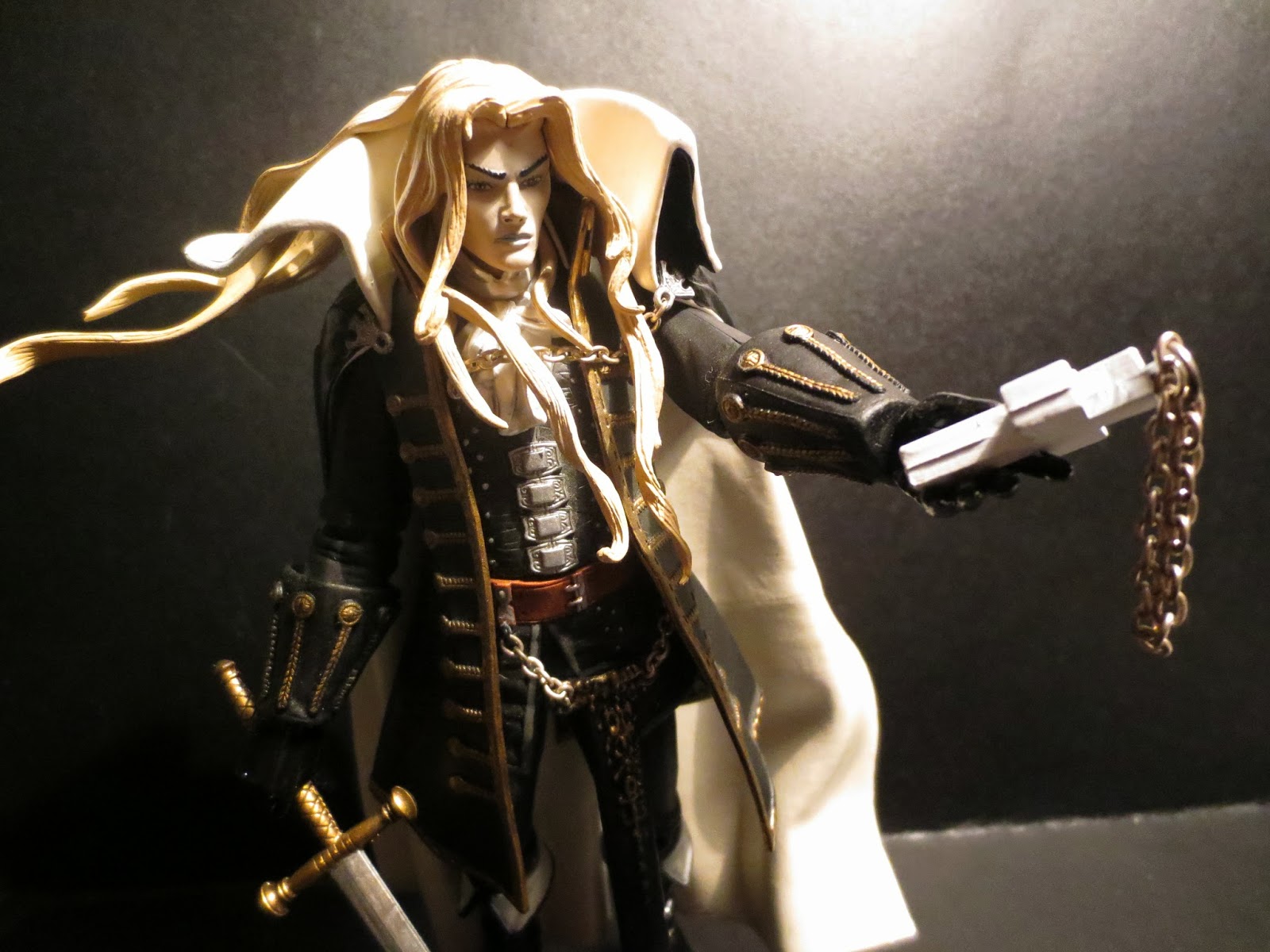 Back in 2007 NECA released just a scant four characters in the Castlevania subset of their long running Player Select series (along with a few variants). That seems like a real shame as, with how many Castlevania games there have been since the series debuted in 1986, it seems like this series really could have had some legs to it. There were numerous opportunities to release cool versions of classic creepy monsters and various arcane warriors; what didn't seem viable about this property? In fact, the original release of this series was quite under produced and saw a saw a second production release in 2009. Today I'm looking Alucard (AKA Adrian Fahrenheit Tepes), the son of Dracula. Yup, being the spawn of Dracula and a human mother Alucard is a dhampir. He originally appeared as a boss who could turn into a playable character if defeated in 1989's Castlevania III: Dracula's Curse on the NES, but it was his role in 1997's Castlevania: Symphony of the Night that cemented him as a major protagonist in the ongoing Castlevania epic. Of course, Alucard wasn't created for Castlevania: He was actually created Robert and Curt Siodmak for the 1943 film Son of Dracula, the third film in Universal's Dracula series. He was portrayed by Lon Chaney, Jr., whom I incidentally saw walking with the Queen. Ready for a review of Alucard? Then join me after the break.... 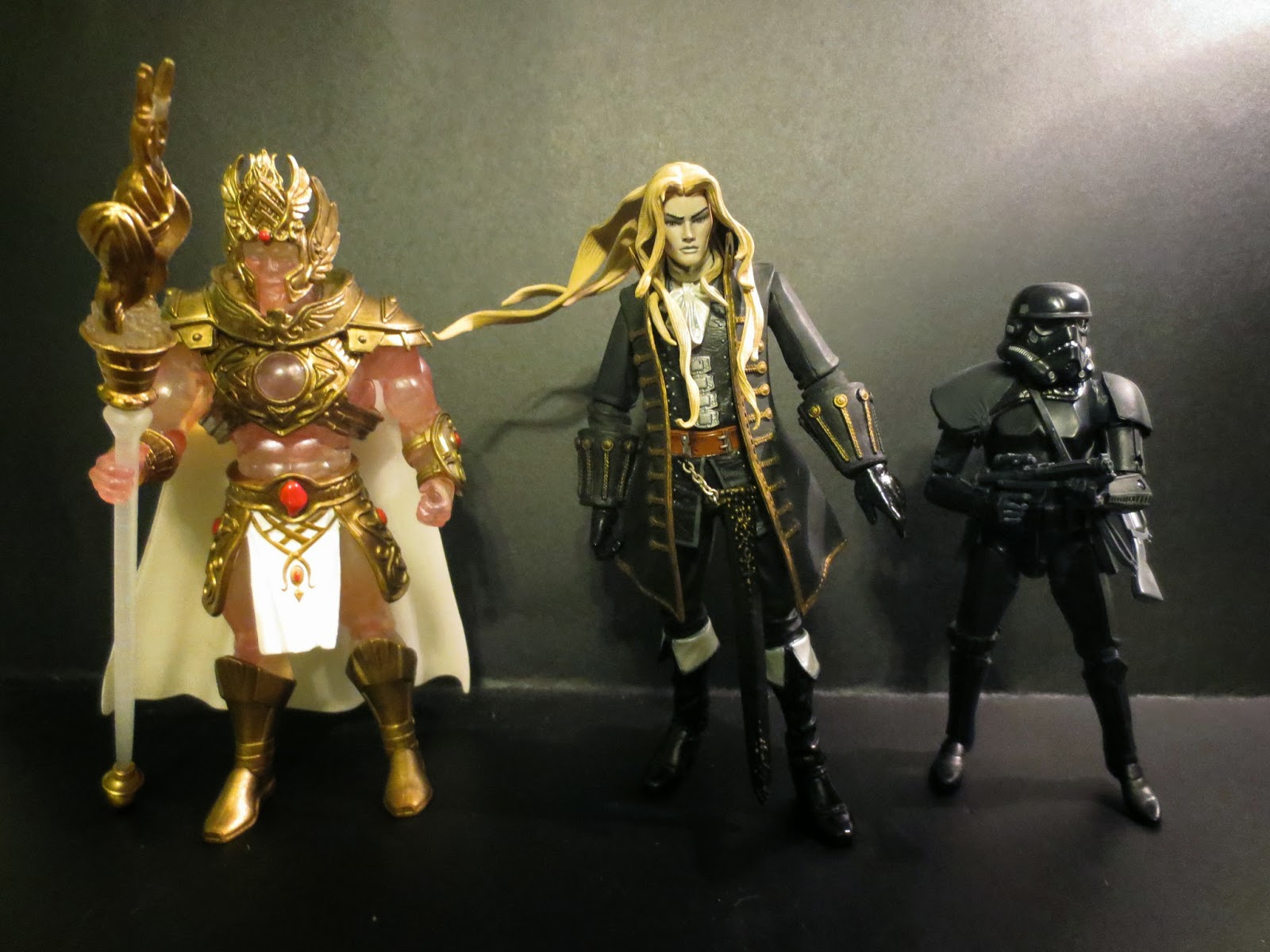 Alucard is a large guy, standing almost around 7 1/2 inches tall. Alucard's appearance seems to be based more on the beautiful artwork for the games rather than any in-game model, thus is has a nice, timeless appearance. They didn't shoot for complete realism, nor did they make the figure look overly animated or "toyetic." Alucard has a nice, timeless look that still holds up rather well. 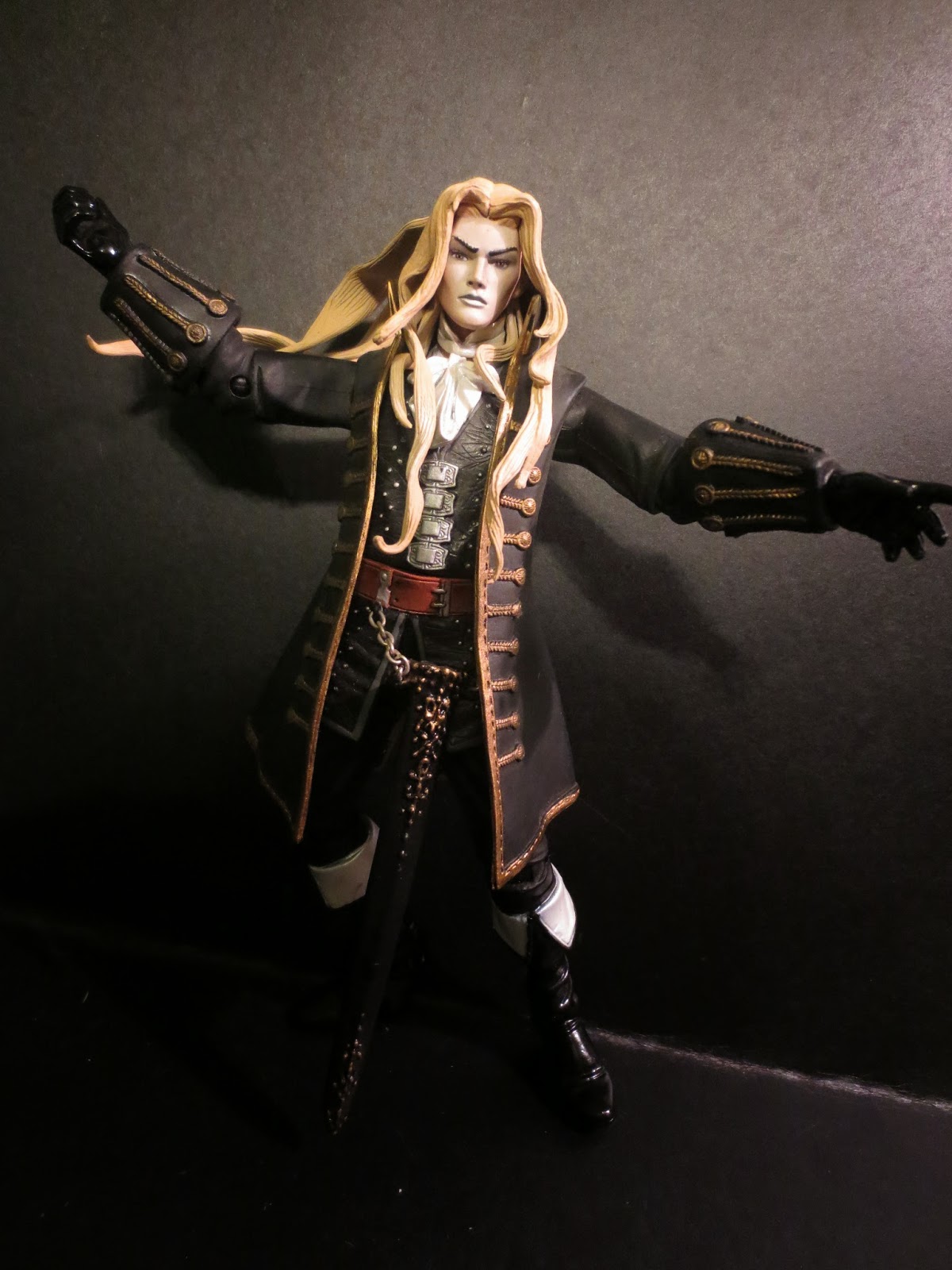 Alucard comes from a period in time when NECA was just starting to add some useful articulation to their action figures. He features the following points of articulation: Swivel/hinge ankles, swivel/hinge knees, H-hinged hips, a swivel waist, swivel/hinge shoulders, swivel/hinge elbows, swivel wrists, and a swivel neck. Because Alucard has a fairly complex costume and long hair, some of these joints (such as his neck and hips) are rather impaired. The limited arm and leg articulation, however, do at least give him a few opportunities for some decent dueling poses. Alucard feels rather solid and well made; some NECA figures from this period can be a bit brittle, but this guy is just fine. 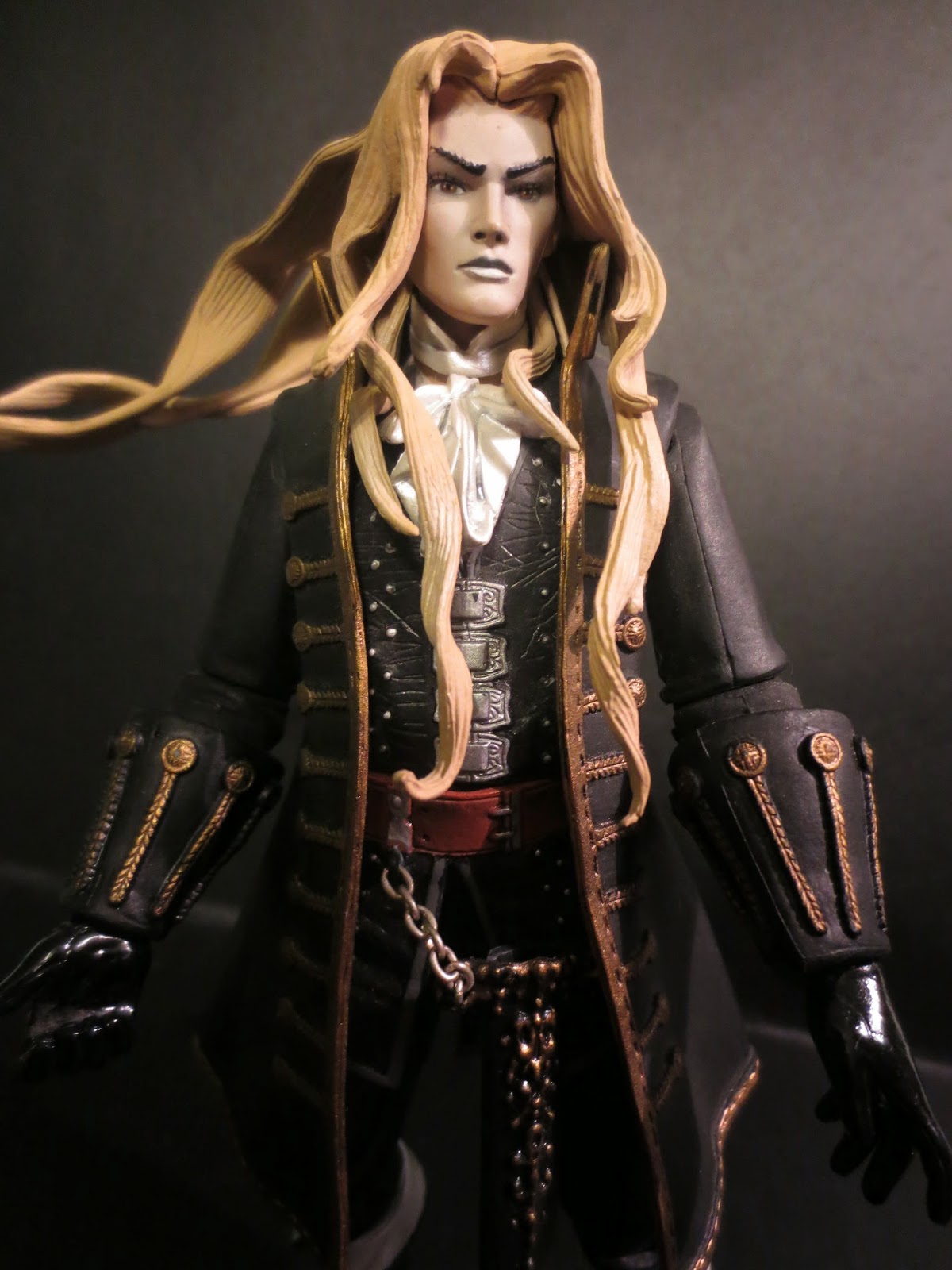 While NECA has continually upped their game in producing excellent action figure sculpts, Alucard still stands out compared to what many other companies are offering. His complex, multilayered outfit can only be described as "schnazzy" and features a somewhat removable cape (it is a bit tough to get on and off), a separate overcoat, a doublet, and some rather impressive boots and gloves. The detail work is incredible as different parts of the sculpt have different textures. The doublet is almost leathery feeling while the interior of the coat has a padded texture. Alucard is supposed to have an unnatural beauty about him and I think NECA captured that trait well. While he still looks somewhat stern, he also manages to have a delicate quality to his features. His hair is pretty cool as well. It's long, wavy, and intricate. Oh, and he has a sheathe for his sword. It is held on his belt by an actual metal chain, although is does rest somewhat awkwardly. 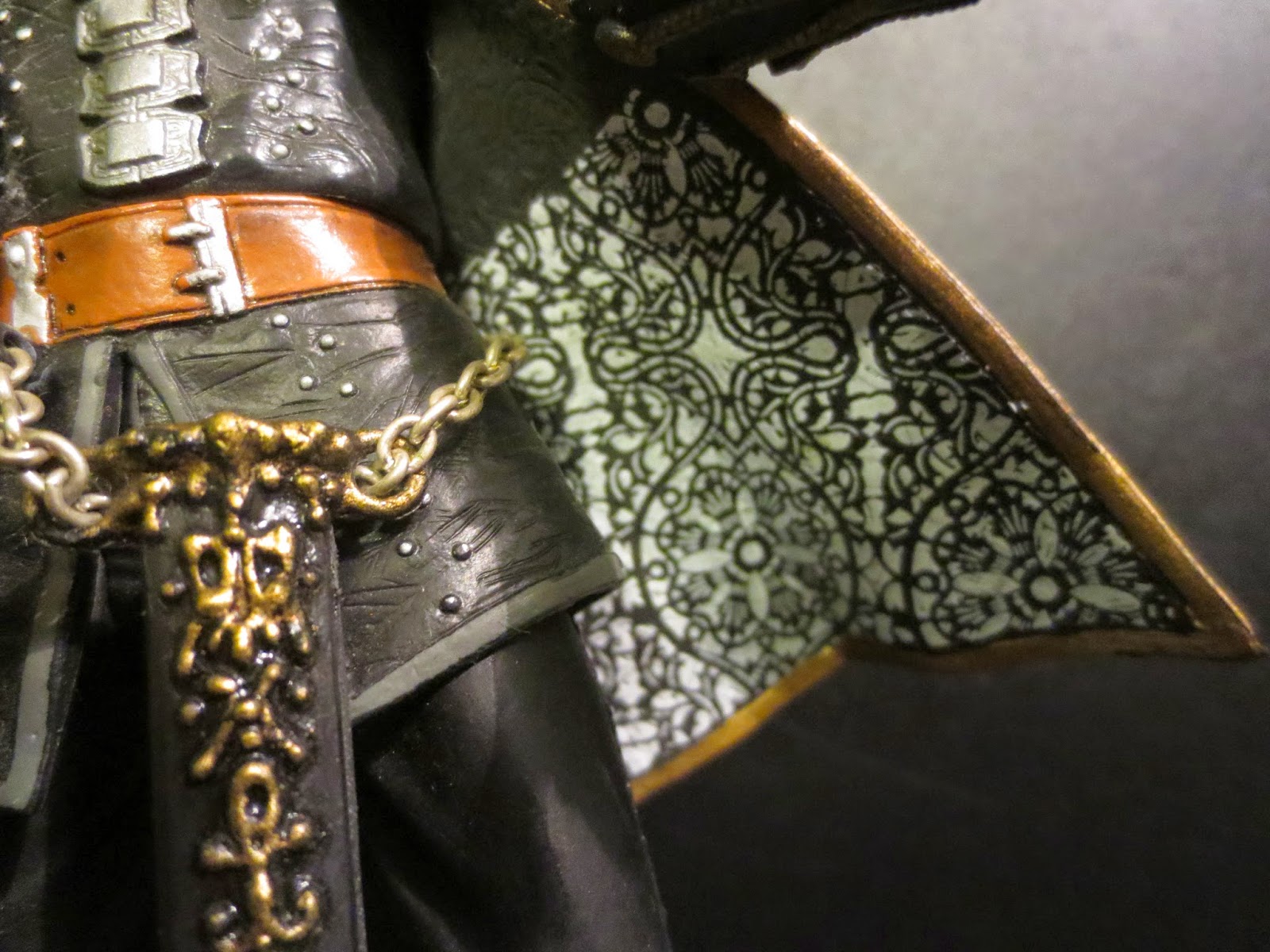 Most of the paint work is rather impressive, particularly some of the patterns on the clothing. The interior of Alucard's jacket features one of the most intricate patterns I've ever seen on a toy. Good grief it's impressive! There are a few places where the gold coverage on the decorative elements of his jacket and gloves aren't quite up to par, but they're a minor setback compared to the sheer amount of win found in details like the shiny boots, the pearlescent, silky ascot, and the figure's pale, flushed face. 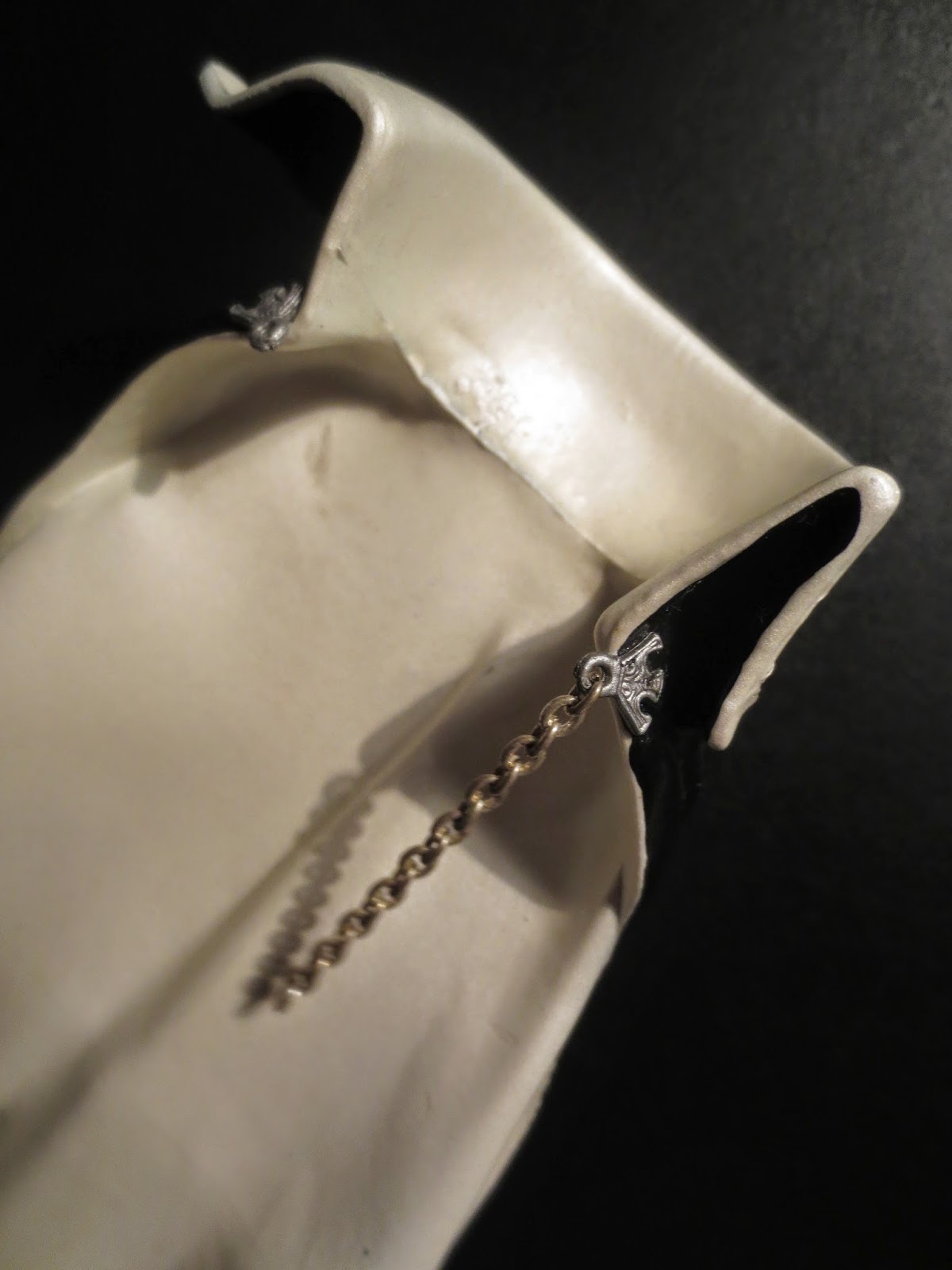 Even in today's market Alucard would be a great looking action figure. His accessories, though, just completely up the ante and set him (and this line as a whole) apart from others. Depending on whether or not you're counting his cape, he either comes with four or five cool extras. The cape is made from very hard plastic and features an actual chain to keep it around Alucard's neck. You can very carefully remove the chain to remove the cape, although I wouldn't recommend doing it too often. 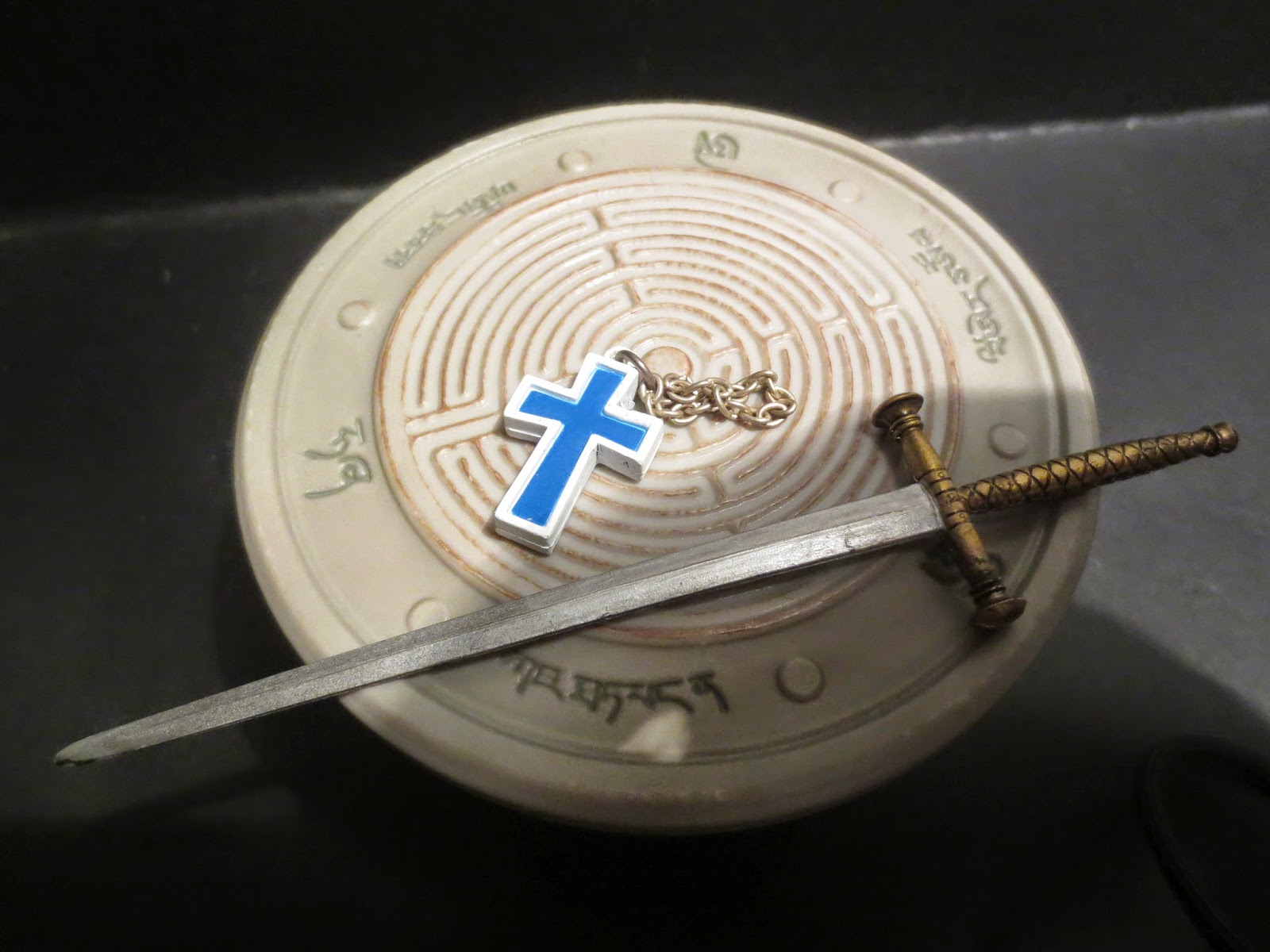 His main accessory is his sword. It's a fairly standard long sword that tends to get a little curved over time and features a nice paint wash to make it look aged. It fits quite well in his right hand or in his sheathe. The last three accessories are key in-game items found in various Castlevania games. First is a cross. It's a simple blue and white cross on a real chain. Alucard can wear the chain around his wrist or hold it in his left hand. 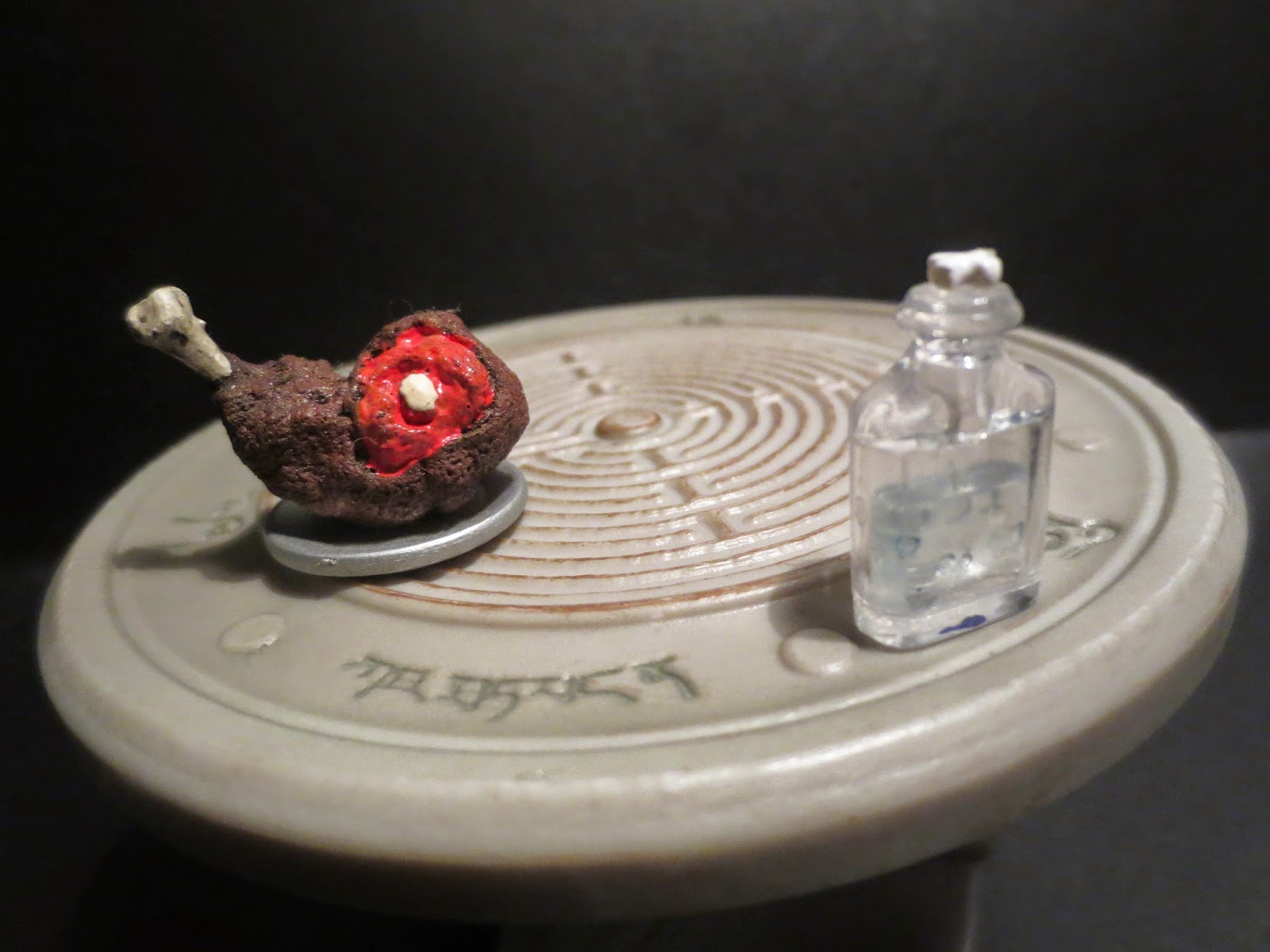 The second is a bottle of holy water. It's a great looking translucent bottle that looks to have bubbly water in it and a cross shaped stopper. Be careful with it, though, because while posing mine I just accidentally broke the stopper off. Last, but certainly not least, is a piece of meat on a silver plate. Referred to in various games in the series as a pork chop, pot roast, or werewolf leg, this tasty treat is often find hidden behind the walls in old dungeons. Yeah, that's not going to make you sick or anything. The meat looks awesome, however, with a dark brown paint job on the outside and a juicy red center. I'm feeling quite confident that this is a prime example of rare meat and it is honestly making me pretty hungry. I think I'm going to go knock some old walls down and see what I can find... 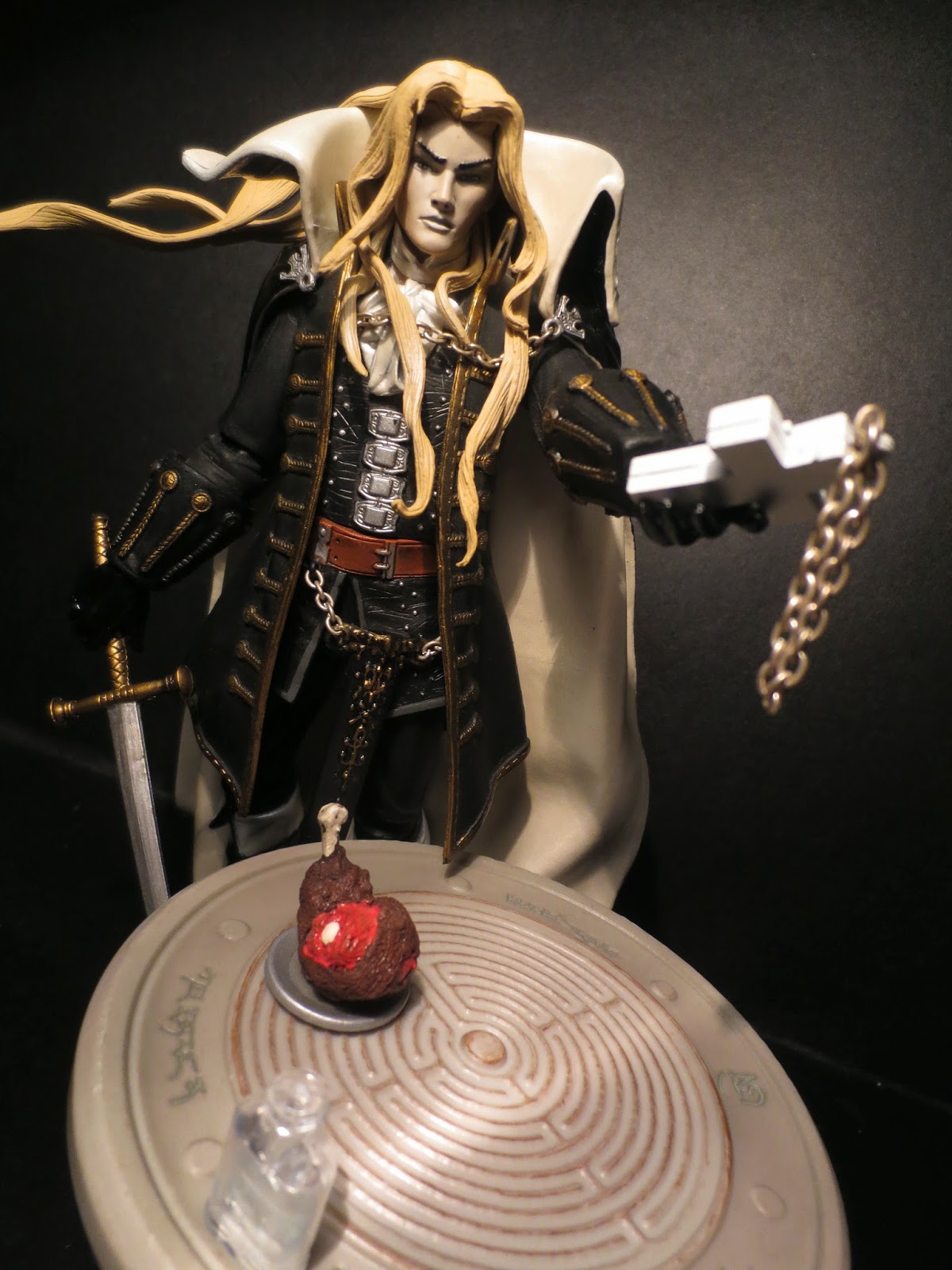 While it's always a shame when a toyline never really gets to see its full potential, I don't think anyone can argue that NECA didn't do a fine job on the figures they did release. While there are a few paint issues and some brittle pieces, overall Alucard is a fine example of the kind of work NECA was doing in the mid to late 2000s that helped to separate them from the pack. They really were picking up interesting licenses and releasing interesting toys during a time when McFarlane was really starting to seem ho-hum. Overall, I'm giving Alucard a Great. A bit more flexibility in his materials, some better articulation with more range, and a bit less usage of brittle plastics would have been appreciated, but as things are he is pretty good.