31 Days of Toy Terror: The Angel of Death from Hellboy 2: The Golden Army by Mezco 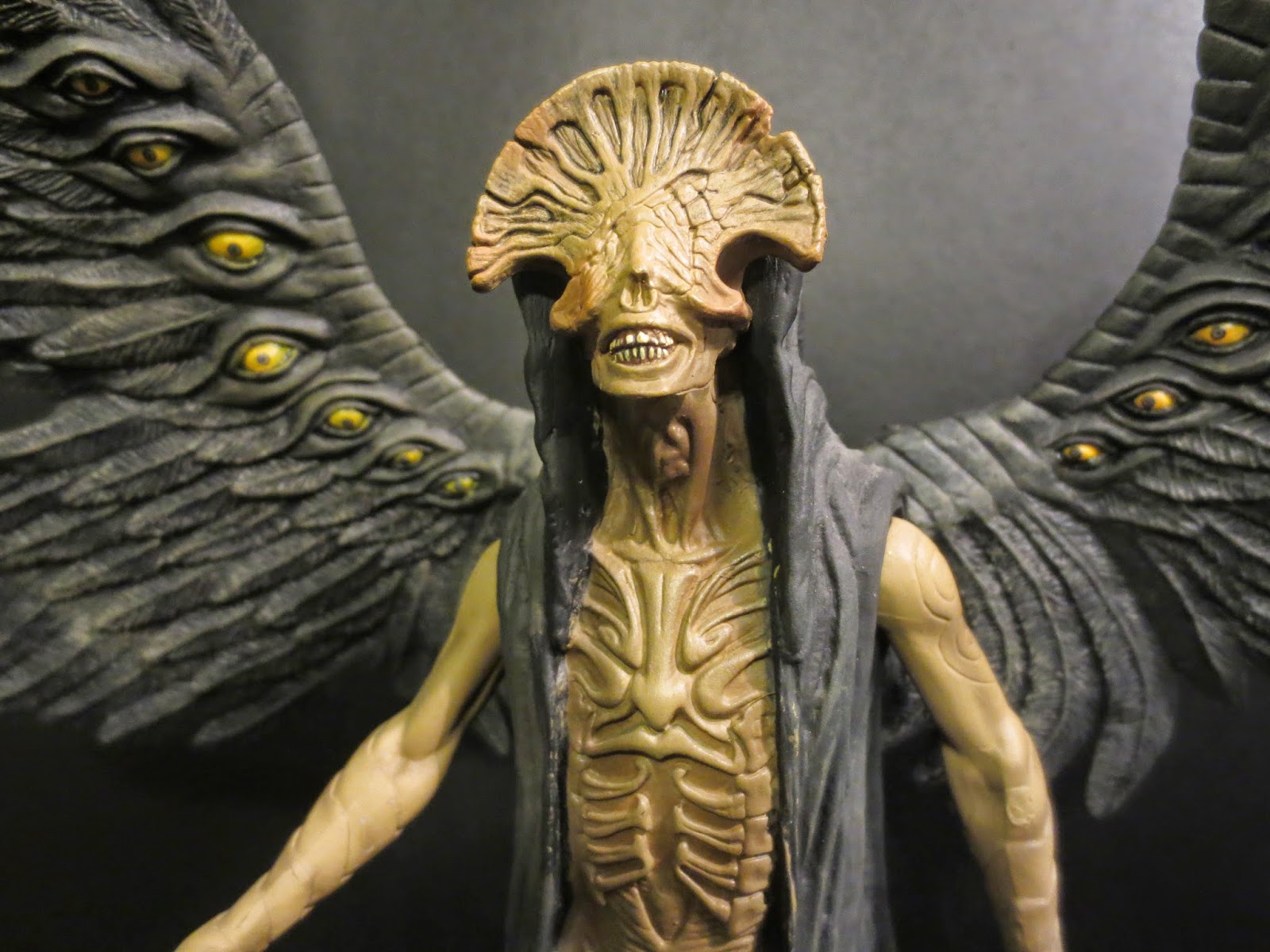 What's the greater horror? The subject of today's review, the Angel of Death from Mezco's excellent Hellboy 2: The Golden Army line or knowing that a third film in the Hellboy series is pretty much never going to happen? I think for me, the answer is the latter. There are just some artists that you come to realize will always release work that you enjoy. For me, two of those particularly special artists are director Guillermo del Toro and writer and artist Mike Mignola. No matter what these gentlemen are working on, I'd bet dollars to doughnuts that I'll enjoy it, so the fact that they teamed up for the Hellboy films was just too much for me to handle. The character of the Angel of Death only plays a small (but vital) part in Hellboy 2, but the character design was so strong and memorable that it stood out enough for Mezco to release her in the second series of the toyline back in Fall of 2008. And yes, the script refers to the Angel of Death as a her, even though she is portrayed by Doug Jones. Ready for a visit from the Angel of Death? Then join me after the break.... 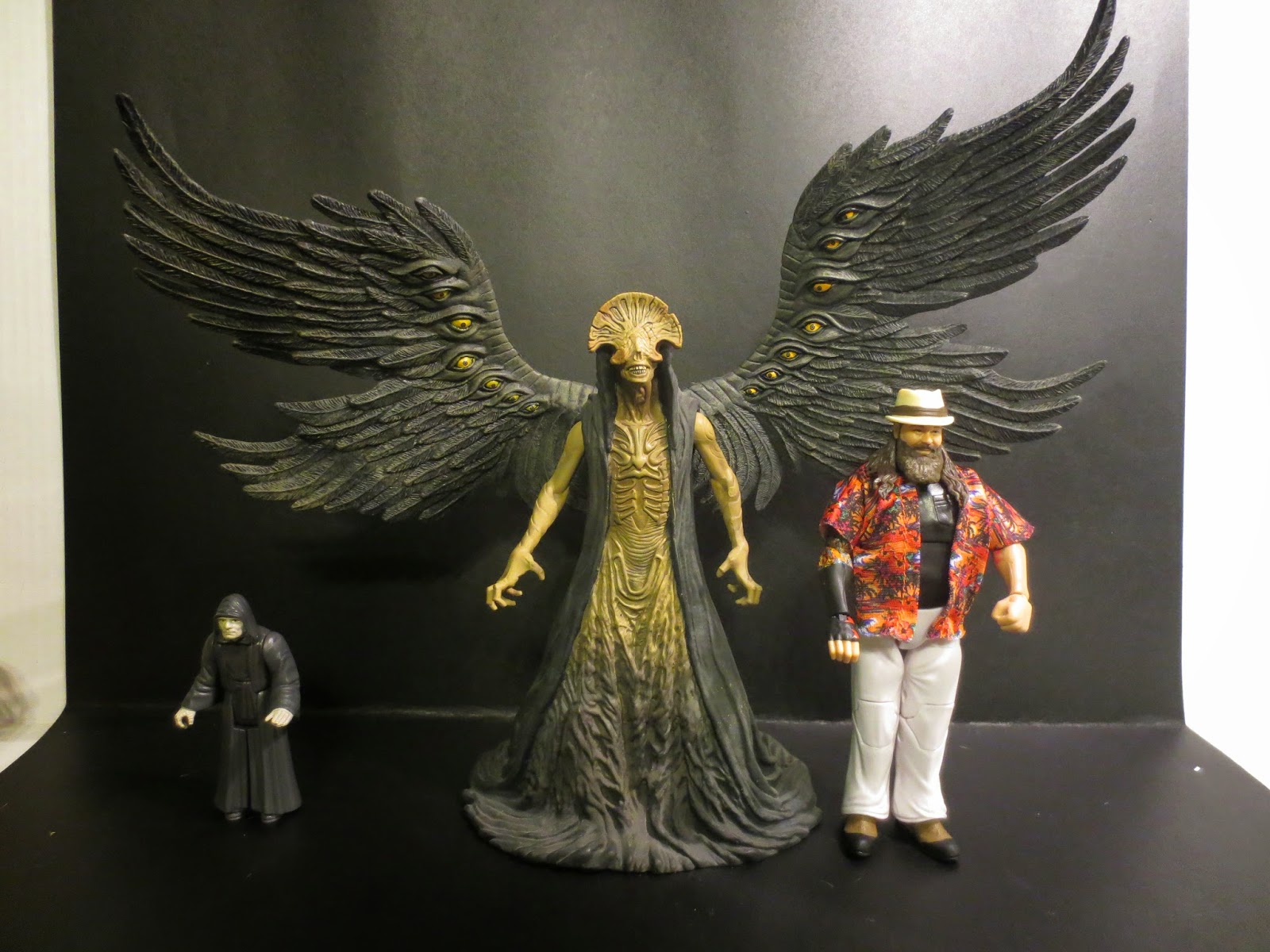 The Angel of Death was released as part of the second series of Hellboy 2 action figures but she was a separate deluxe boxed release. The addition of her giant wings makes her take up quite a bit of space. She stands about 8 1/2 inches tall, which isn't much taller than Hellboy himself, but with her wings added in she can be well over a foot tall with a huge wingspan. The figure avoids Mezco's typical caricatured style and instead is just an accurate replica of the character seen in the film based off of del Toro's awesome character design. This figure is rather versatile and could easily fit into pretty much any fantasy or horror themed line you wanted to display her with. 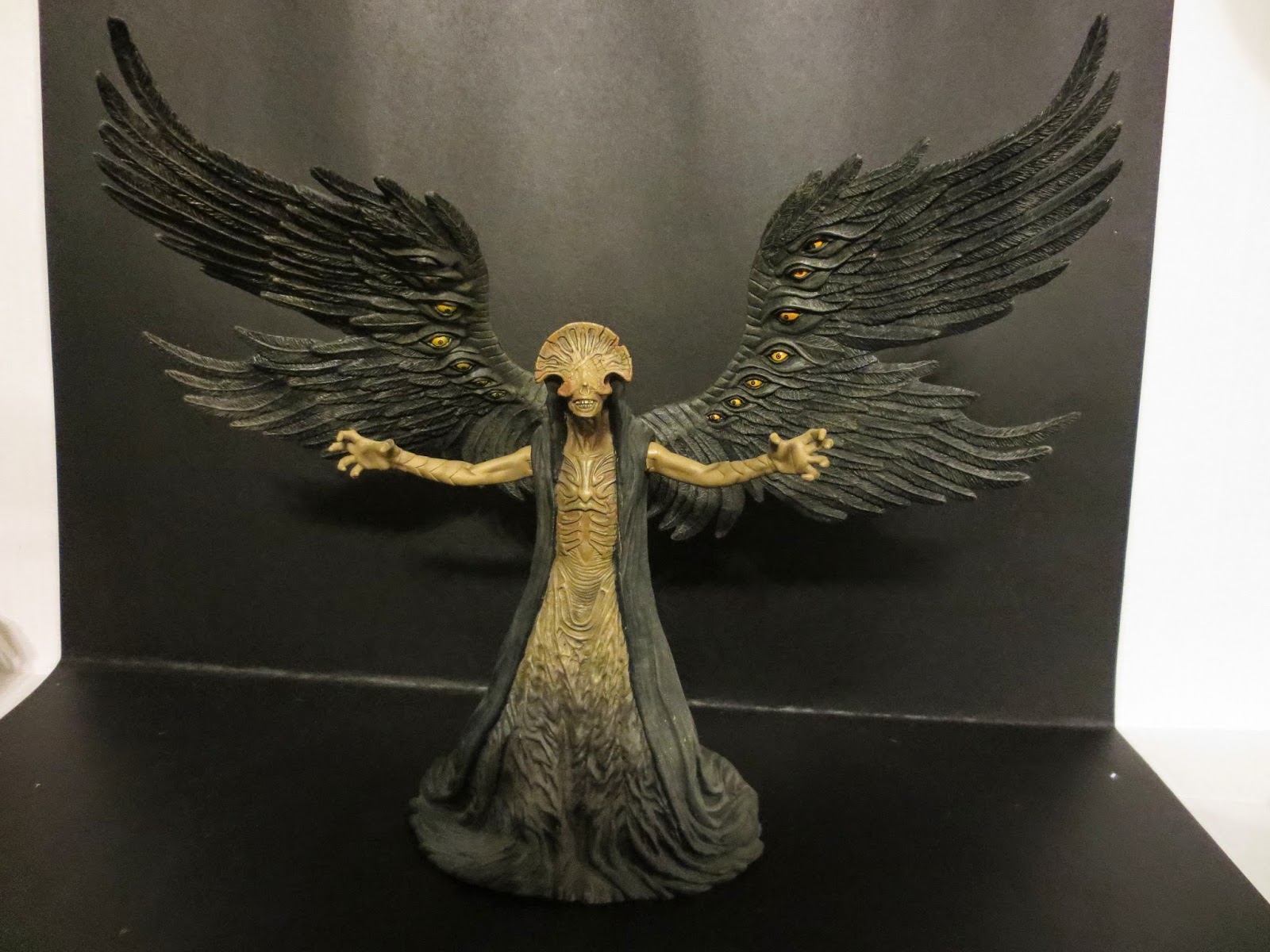 One of the downsides of this figure is that there just isn't much articulation. Most of the figure is hollow plastic due to being rotocast which doesn't leave much room for articulation in the body. The only points are: Swivel/hinge shoulders and swivel hinge wings. Yeah, that's a little disappointing. The head doesn't even move! Anyways, the appearance of the toy is really very impressive, as she has a lot of presence, but beyond moving the arms and wings there isn't anything you can do to change things up a bit. I really wish the head at least moved and that the wrists swiveled. I've also had problems keeping the wings in their sockets. They come unattached in the package and really can be difficult to attach. 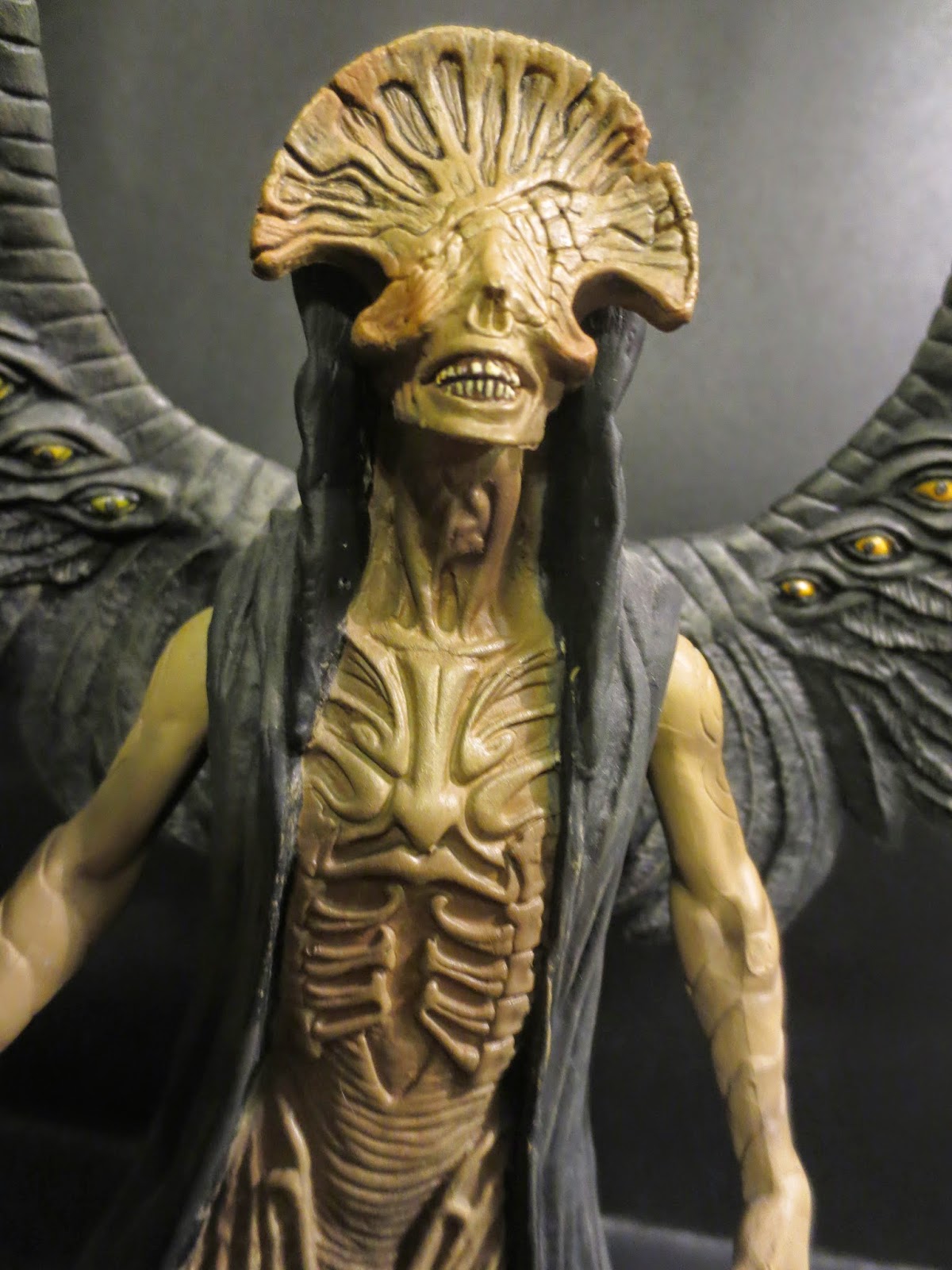 The one thing I cannot complain about with the Angel of Death is the sculpt. It is quite amazing. While I imagine the rotocasting process caused the body sculpt be a bit softer than it could have been, it's still rather impressive. The wings are definitely the most impressive part as they're massive and have a great life-like texture on each individual feather. The eyes on the wings could be a bit better, but the effect is still rather striking. The Angel of Death's robe is fairly intricate with wrinkles and folds, but it's the body that does the best job of capturing Guillermo del Toro's art style. Seeing the bone-like crest on the Angel's head, the skull like lower face, and the intricately designed torso just makes me wish that someone would release a toyline based on Pan's Labyrinth. 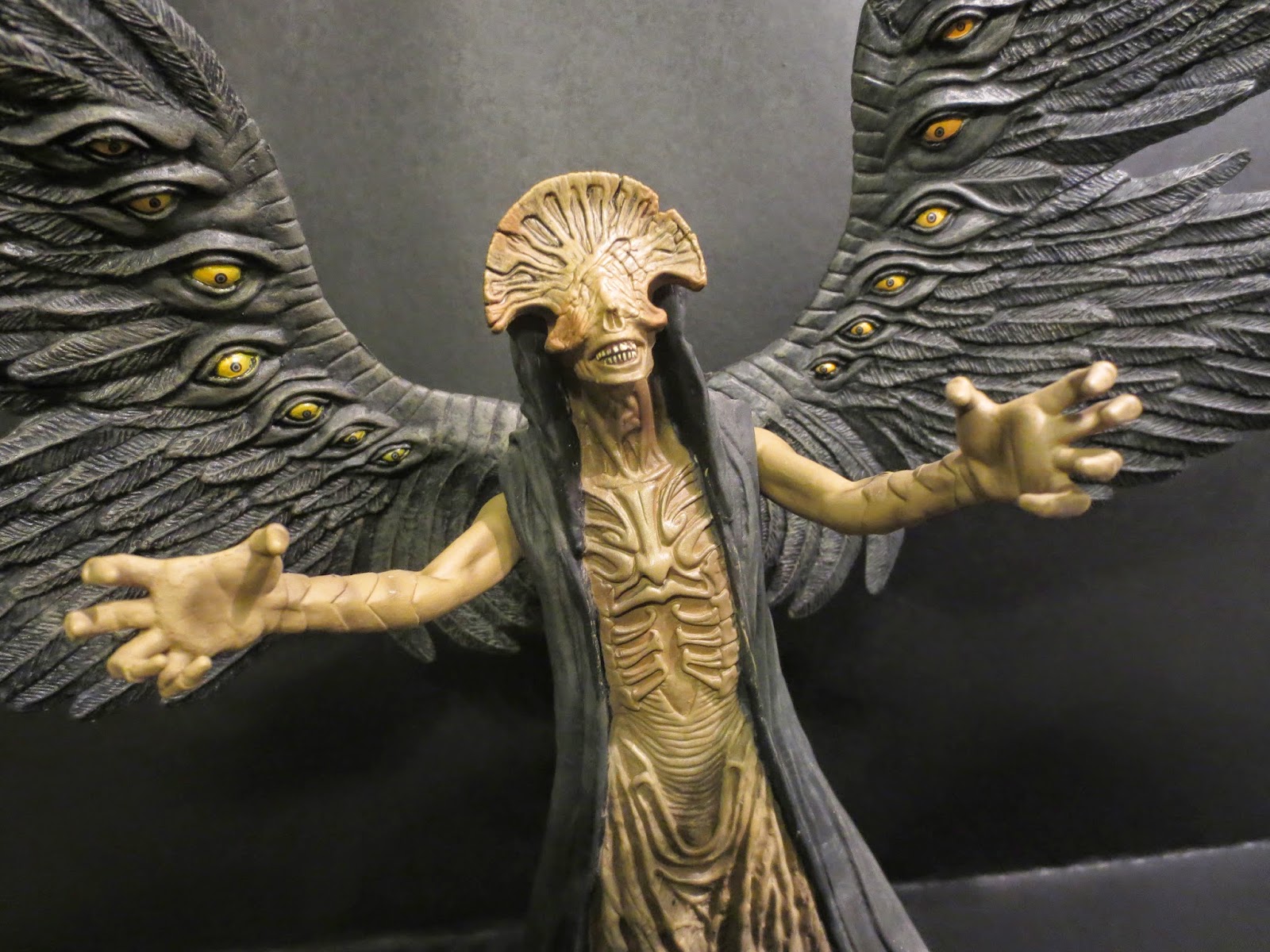 The paint work is good. Not great, but good. The figure is molded in a dark gray plastic with the other elements applied over that. The head looks great, as does the torso, since there is a nice brown wash to brink out the detail. The work on the head is also very sharp, particularly on the teeth. The robe, though, just seems a bit to ordinary for this character and a release of this style. The wings rock, though. There's a great whiteish-gray wash over them that helps to capture the appearance of layered feathers. The eyes could definitely have been handled better. They don't look bad from a distance but if you get closer or stare at them longer you'll start to notice some problems. 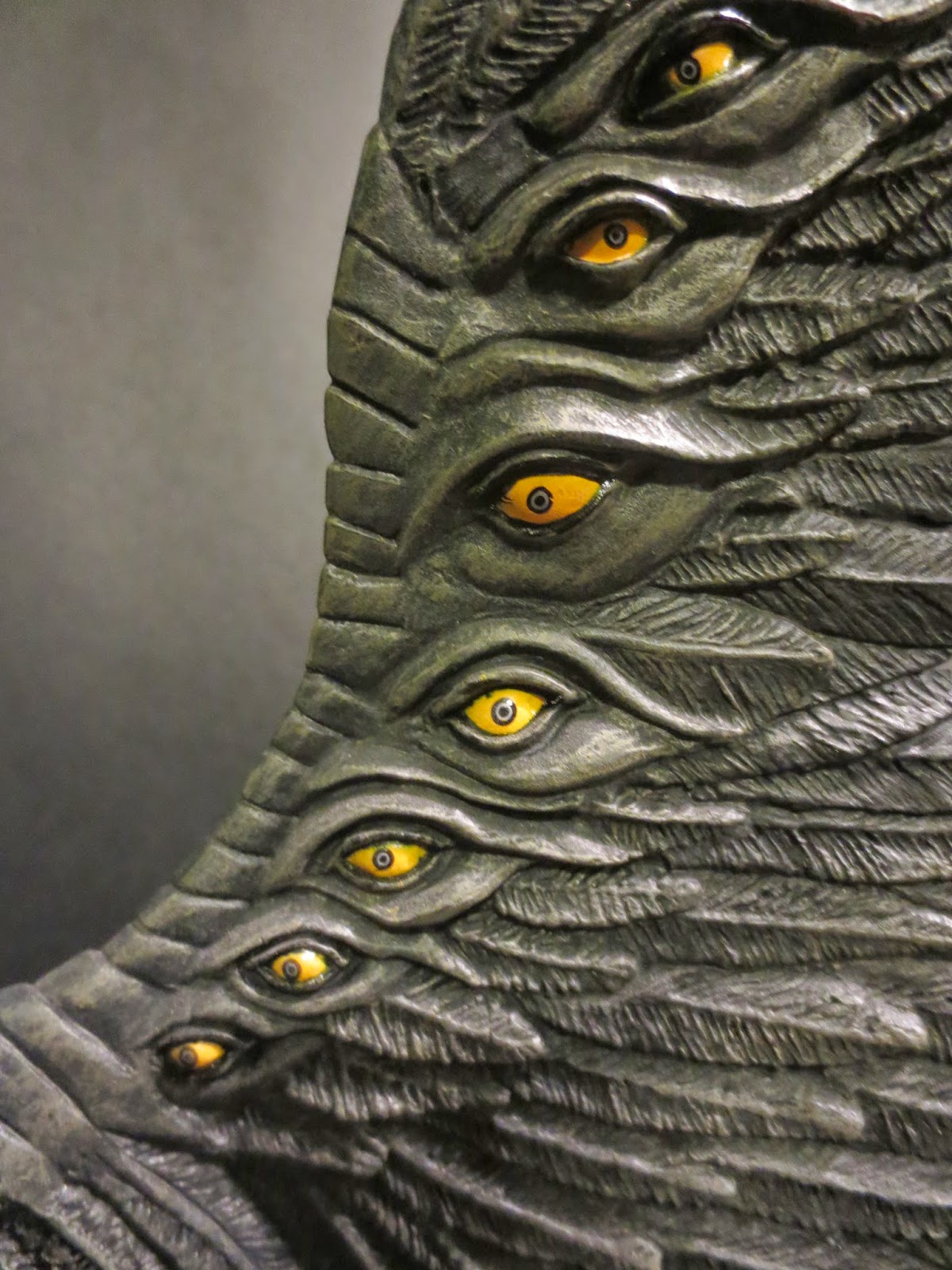 Unless you count the wings (since they come unattached in the figure), the Angel of Death doesn't have any accessories. Not a deal breaker for a figure like this as the selling point was the sculpt, scale, and paintwork. 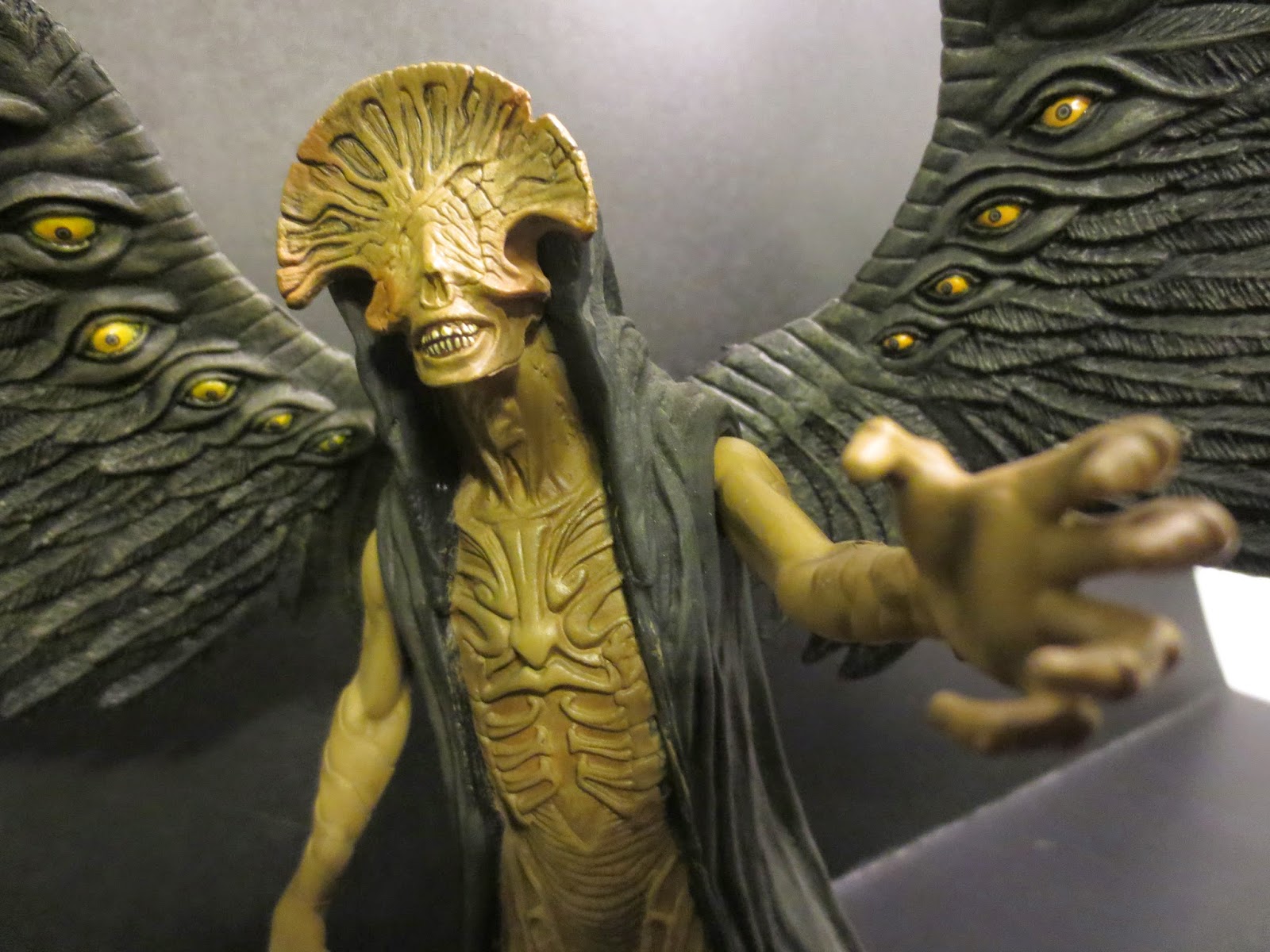 I remember being a bit disappointed with this figure when I received it back in the Fall of 2008, but I've really come to appreciate it over the years. Despite some of the weaknesses in the articulation and paint work, the sculpt and presence of this toy is really impressive. This is a large figure that definitely grabs the attention of anyone who sees it. It is unfortunate that Mezco's Hellboy lines always seemed to end after the second series as the Hellboy universe (both movie and comic ) seem to have a lot of legs. Still, I'm really glad to have this figure and would easily give it a Great rating. It's definitely a fun piece for Hellboy fans, del Toro fans, creature fans in general, or just folks who are wanting something a bit different in their angel action figures. 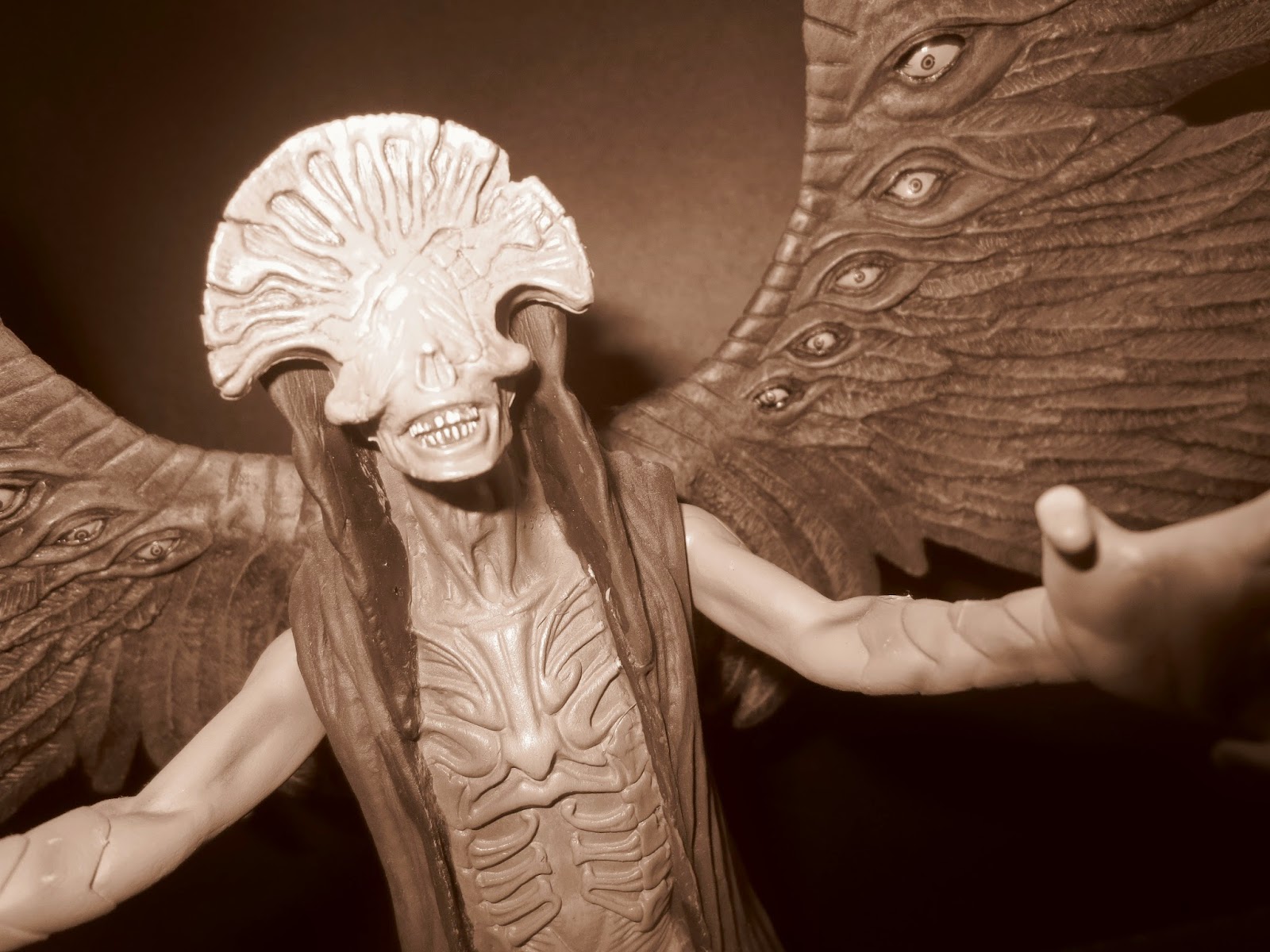